If we don’t have time to see all the sights in Zurich, we can limit ourselves to the main ones. Everyone has different interests, so if you want you can read the section and find something that interests him. If you do not have obvious preferences, but you want to feel the atmosphere of the city, then this list is for you. Here to save time given only brief information. If you want more detail, you can go to the right section.

The best places to see in Zurich:

The first place to go is the Bahnhofstrasse, which is the easiest place to start exploring Zurich. This is the center of the city and the first place that becomes known to the visiting tourist, it is also where most transport routes intersect.

So – behind the back of the station, the fountain with a statue. The street in front is Bahnhofstrasse. You can not go by car – only streetcars and pedestrians. And there are stores on both sides of the street, interspersed with restaurants and banks. If you walk forward, the level of stores keeps rising – only high-end brands are located closer to the lake. In good weather, it’s worth a walk – in summer the street is filled with the sweet aroma of blooming linden trees, and in winter – beautiful illuminations of stores, light composition to the northern lights, hot mulled wine and aroma of roasted chestnuts.

The end of the Bahnhofstrasse ends at the Burchliplatz, the square near the lake. On Saturdays in summer there is a flea market on the square, and sometimes in spring there are merry-go-rounds. For those who want to go sailing on Lake Zurich, boats depart from the Burgliplatz.

Somewhere in the middle of Bahnhofstrasse is another transportation hub – Paradeplatz (Parade Square). A stop here is worthwhile for the legendary Sprüngli Bakery. There you can taste the famous Luxemburgerli pastry. The pastries are delicate, meringue-like, with a cream filling and in different flavours: vanilla, chocolate, champagne, walnut, amaretto, chestnut, coffee, lemon, strawberry and more.

Then head to the Altstadt (old town), the oldest part of Zurich (to the left of Bahnhofstrasse, as you exit the train station). The narrow streets are full of medieval charm and the little painted houses with balconies and geraniums in the windows. The numbers on the houses usually indicate the year of construction. There are even houses built in the 10th century. Roman baths and the Church of St. Peter.

Two towers – the Church of St. Peter and the Fraumuenster – rise above the old town. St. Peter’s Church is famous for having the largest tower clock face in Europe. If you stand to the side of it, you can notice a tiny alley going down the steps of Termengasse . It is worth stopping there to see the remains of the Roman baths. 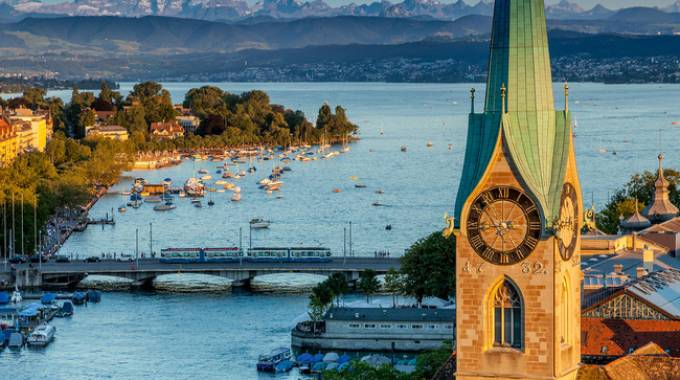 Then walk back up the hill from St. Peter’s Church and you’ll see the Lindenhof, a hilltop site that was once the customs office from which Zurich grew. Along the way on the left will be ancient slabs on which the name of the city is first encountered. From this platform you will be able to admire the Limmat River and lake, the alps and the two-headed Grossmünster Cathedral on the other side of the river. 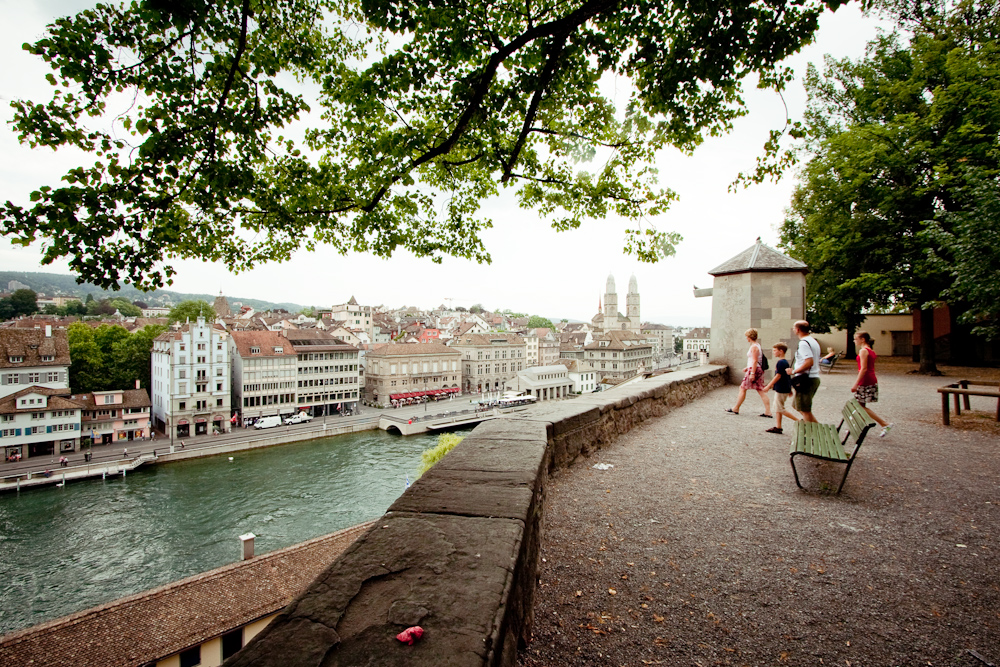 Walk back down and through the streets toward the lake and you’ll see the Fraumuenster, once a convent for noblewomen. It’s a cathedral where you can’t miss the incredibly beautiful stained-glass windows by Marc Chagall.

The convent was built by Louis the German for his daughter Hildegarde. The abbesses of the abbey were essentially the rulers of Zurich for a long time, having the right to print money.

On the other side of the river would be Zurich’s third main church, its symbol, Grossmünster . Grossmünster was originally a monastery for men, and later became a center for the Swiss Reformation, led by Ulrich Zwingli (his monument stands at the Wasserkirche church across the street, by the river itself).

READ
Where to stay in Malta 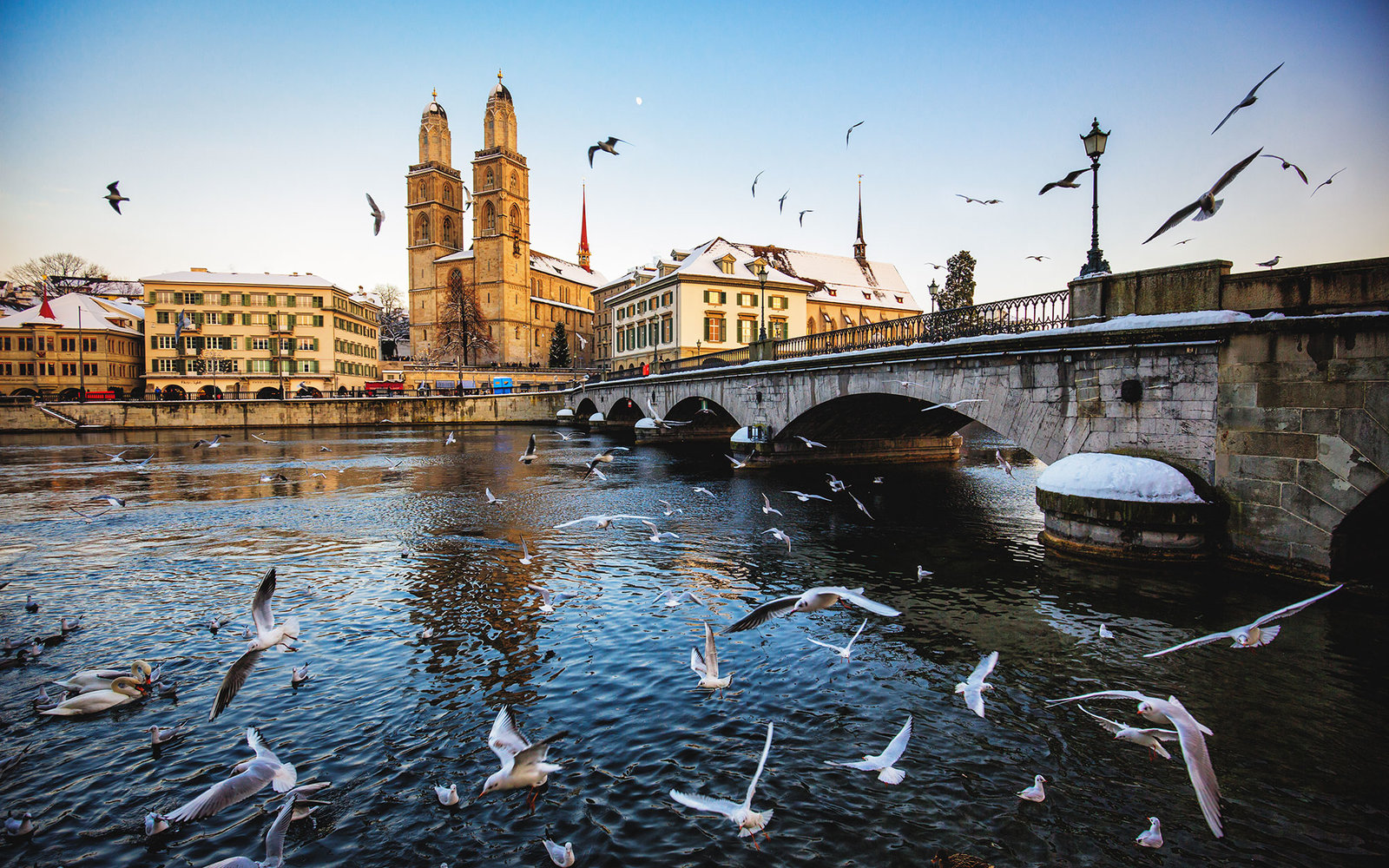 When the weather is nice it’s worth taking a walk along the promenade, from Grossmünster to Bellevue and along the lake. At the lake you can take a break and feed the cheeky swans. They eat right out of your hand and usually flit along the shore, tracking where they’re going to feed. By the evening of the weekend, they’re so full that they’re too lazy to even swim up for food. However, on weekdays, during the day a whole fight can start for a piece of loaf.

You can go further along the lake to the place where the lake expands, forming a kind of green park area from the shore. If it’s a Saturday – along the way you can meet a lot of entertaining public – clowns, magicians, gymnasts, musicians, and just interested idle and wandering public. On the shore, freelance artists build fanciful compositions out of rocks.

If you have the patience to walk to the end of the promenade, you can eat at a restaurant overlooking the lake. To go back you can either go along the promenade and pass the Chinese park (you can go there if you have time) or you can take a streetcar from the lake where you will find a branch line to get back to the city center.

On the way back you can walk to Limmatquai – the promenade on the right bank of the Limmat River – and make sure to walk through the Niderdorfstraße, a small alleyway that runs along the river across one row of houses from it. There are a myriad of restaurants-bars-cafes and all kinds of stores. In the evening this is the busiest and noisiest place.

If you walk along Niederdorfstrasse in the direction of the station, then at a certain moment you will find an old colonial store on the left. For centuries, you can buy there all sorts of spices and coffee (and Switzerland is famous for its quality coffee). There is also an old mill for coffee beans. It’s still turned on sometimes.

On the same spot you can notice an atypical for narrow streets square. The thing is that the post office used to be located there, and it was necessary to use this platform for the postal carriage to turn around. If you now turn right, you can see the house where Lenin lived at one time at Spiegelgasse14 .

If you can’t be far from the Central stop (over the river from the train station), you can see the Polibann station in the building. From there you can get to the Politerrassa – observation point near the Polytechnic University (ETN) by taking the funicular. If the station is already closed, you can also take the streetcar 10 and 6 to the ETH/ Universitätspital stop. It is literally a couple of minutes.

ETN is the first of Switzerland’s universities and one of the best in Europe. It was here that Albert Einstein once studied. The building itself dates back to the 19th century. Opposite it is the equally old building of the chemistry department of the ETN.

Next to the ETN is another university, the Zürich Universität, one of the first in Europe where women were allowed to study. As a result, at the end of the 19th century there was an invasion of Russian female students in Zurich.

From the observation deck behind the main entrance of the ETN (Polyterrasse) you can have a wonderful bird’s eye view of the city center. There you can take a break from a long walk and have a beer at the student bar while admiring the towers of Zurich. And in winter, there is an ice rink on the square.

View from the ETN observation deck.

On another day you can go to the mountain Uetliberg, which offers a stunning view of the entire city, the mountains around, the Alps and the lake.

Minus is the need to pay extra for a ticket for two areas, as this is no longer the territory of Zurich and the usual pass is not valid. You can get from the main station by train S10 to Uetliberg, which runs about once every half hour. The transit time is about 25 minutes and you are on top of the mountain. If you walk up a little more, you can climb the observation tower with a gorgeous view of the whole Zurich, the lake and the Alps. You can just sit down and have a bite to eat in a restaurant with a view of the city.

If you have a desire for cultural enrichment, the first place to go is the Kunsthaus, one of the largest museums in Switzerland, which has a number of outstanding paintings by Picasso, Monet, Salvador Dali, etc. in its collection.

The Kunsthaus is located not far from the ETN building – between it and Bellevue. It can be reached by trams 6, 9, and 10 to the Kunsthaus stop.