Wooden churches in the Slovak Carpathians

Due to its geographical location, the north-east of Slovakia is one of the crossroads of cultures, which have had an indissoluble influence on each other. That is why the architecture and the decoration of the wooden churches combine elements of Latin and Byzantine styles.

Each of the churches is unique, but they all have a common division of the interior into 3 main parts: the vestibule or grandmother, the nave and the sanctuary.

The dominant feature of each church is the iconostasis, which separates the sanctuary from the nave. This wall is made up of several rows of icons, which are arranged according to a precise liturgical canon. Each icon is characterized by the fact that it is painted on wood and hides a profound symbolism. It is symbolism that is the dominant feature of the entire Eastern rite, not only in the painting of icons, but also in the performance of individual services and various rites.

They were built between the 16th and 18th centuries without metal parts, such as nails, and without a tower. There are 50 such churches surviving in Slovakia, but only 8 of them were declared World Heritage Sites in 2008.

They include 2 Roman Catholic, 3 evangelical and 3 Greek Catholic churches:

This complex of sacred buildings is not only a testament to the coexistence of different religions in the Slovak region. It is also an example of the deep connection between nature and the human soul, when the desire to break away from everyday life is above all.

The Roman Catholic Church of St. Francis of Assisi in Herwartov

It has been standing in the center of Khervartov since the second half of the 15th century.

It consists of a rectangular nave, a polygonal presbytery, a small sacristy and an attic. The Gothic building has a unique expression due to its thin rectangular windows and the steep, pointed roof, which is covered with tiles.

The sanctuary has a main altar with images of the Virgin Mary, St. Catherine of Alexandria and St. Barbara with 4 gabled additions with Kings Solomon and David and double-sided images of the prophets Elijah, Habakkuk, Daniel and Jonah.

The Roman Catholic Church of St. Francis of Assisi in Khervartov

The interior is lined with vertical boardwalk tiles. It features rich murals with figures and plant motifs throughout.

A rare monument of the Reformation is the 17th century wooden polychrome baptistery with carved sides and canopy and a boardwalk depicting the Last Supper. The figurative motifs of Adam and Eve in Paradise, St. Juraj’s battle with the dragon, and the parables of the wise and merciful virgins, which are among the rarest in the temple, are complemented by quotations from the Bible in Latin, Czech and Slovak.

The Roman Catholic Church of St. Francis of Assisi in Herwartov

The first articular church was built by Evangelicals outside the city walls in 1687 and 1688.

Since it was not large enough, they decided to build a larger church. After the Rakoczi rebellion, in April 1717, they dismantled the existing building and began building a new church. In the same year, a log church was added to the older brick building of the inn to serve as a vestry and school. 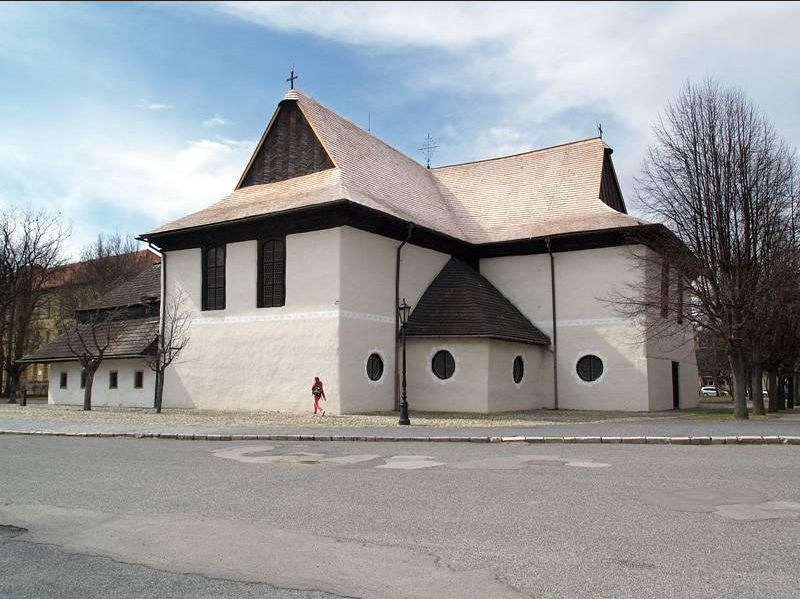 The builders were inspired by traditional vernacular architecture and used mostly saddle-shaped roofs and shingles. Probably for aesthetic reasons, the log houses were treated with lime and clay plaster on the outside, which was reminiscent of the magnificent stone architecture.

Inside the temple, more than 1,500 seated worshippers could pray together. In the altar part of the temple there are the remains of ancient epitaphs of the XVII – XIX centuries.

In the temple the vault with the image of the sky, figures of 12 apostles, 4 evangelists, the motif of the Holy Trinity in the altar dominates.

On the side walls are scenes from the Old and New Testament, figures of angels and musicians. This painting probably belongs to the Levoche artist G. Krammer and his son. 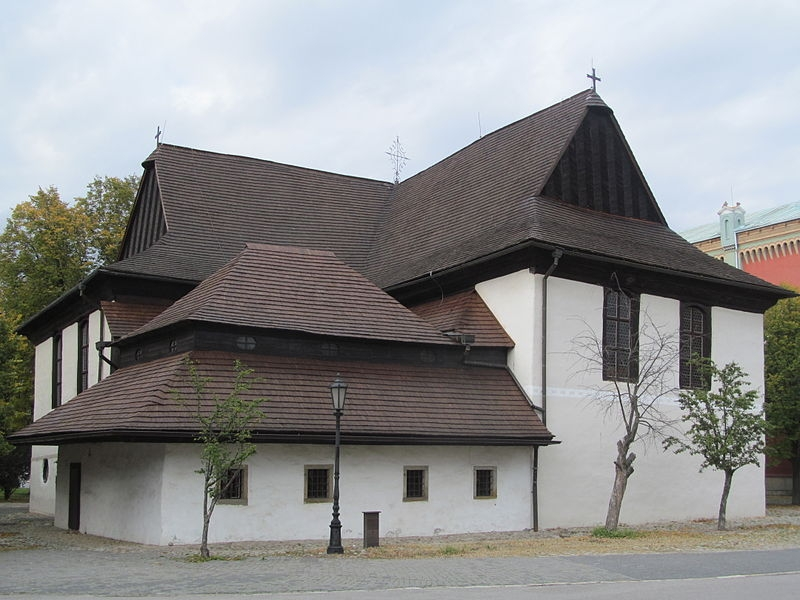 The core of the artistic decoration of the church is the early Baroque altar and pulpit. They were built between 1718 and 1727. In the center of the altar is a crucifixion scene with the figures of Moses and Aaron. In its superstructure is a sculpture of the Holy Trinity.

The central orientation of the pulpit in this area testifies to the importance the Protestant church attaches to the spoken word and discipline. Only the late seventeenth-century stone baptistery remains of the old church. 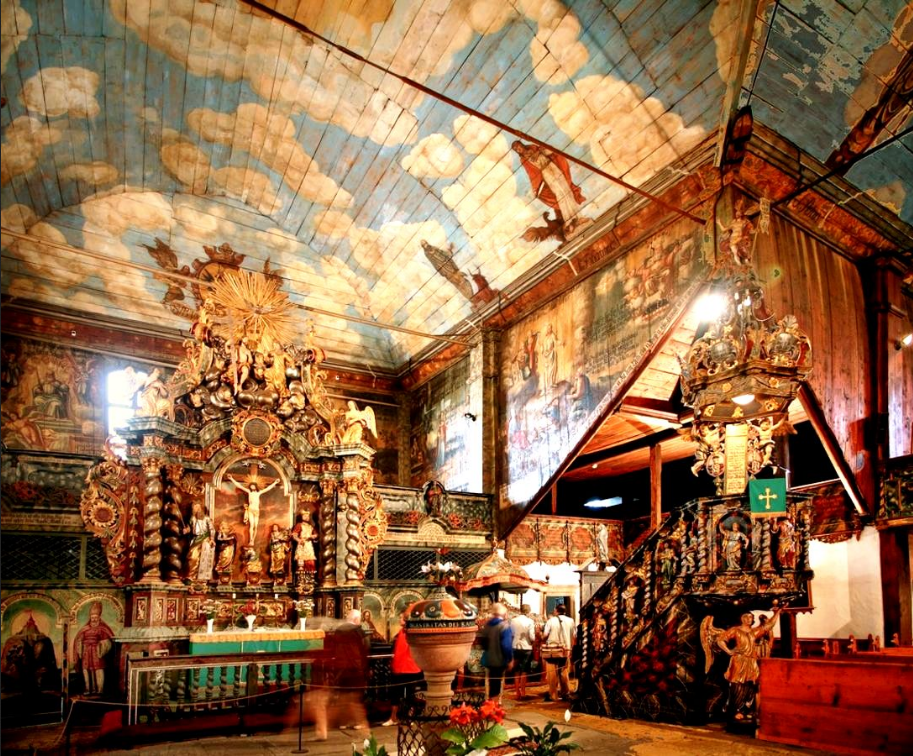 The original organ with 12 registers was expanded and improved by master M. Korabinsky of Spisska Nová Ves. The result was an entirely new instrument, whose clear and magnificent sound is still used in many concerts of classical, especially church music.

The church is still functioning, and regular services are held in its premises.

It is one of the oldest wooden churches in Slovakia. Its construction dates back to 1658.

The Bodružal church is a three-room log house, which consists of a smaller presbytery with a square floor plan, a large square nave and a narthex under the main tower. The exterior of the church is clad with slabs and a shingle roof. The roof is decorated with poppies with wrought iron crosses.

The bottom of the vestibule, nave and chancel are lined vertically with slabs. 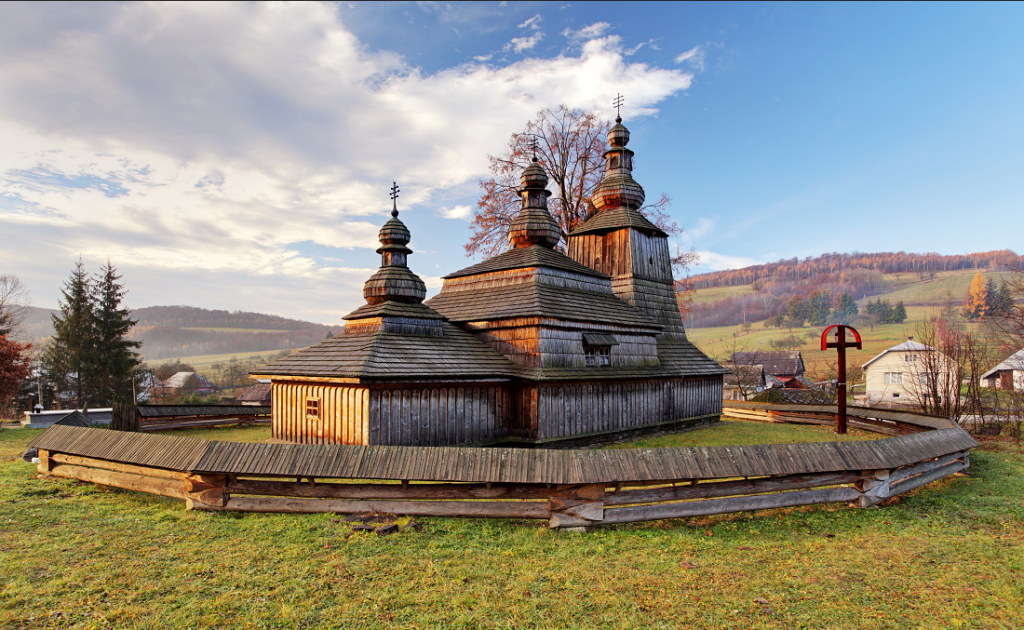 The main tower consists of 2 parts, tapering upwards, covered with planks and slats. The attic has small sound openings of interesting shape. The tower has 3 bells, the oldest is from 1759.

READ
Lisbon as a tourist

The territory of the church is surrounded by a wooden fence with a tiled roof and an entrance gate with an almost circular floor plan.

The iconostasis is unique in that it is painted on both sides. The current 17th century iconostasis was painted on the back of the original iconostasis. In 1968 the icon of Christ the Teacher was divided longitudinally into two parts. At the back – in the nave on the south wall is an icon of St. Paul with another disciple. Because of the possible irreversible damage to the iconostasis, the division of the individual icons was abandoned.

The central emperor’s door is double-leafed and gilded. They are equipped with 6 medallions, 2 icons of the Annunciation and 4 evangelists. On the facing of the imperial doors are depicted St. Basil the Great and St. John the Golden, above them at the top is God the Father.

The main altar behind the iconostasis is Baroque with an older depiction of a crucifix. At the bottom of the altar is an icon of Christ coming under the cross.

An eighteenth-century fresco depicting the Last Judgment and the Crucifixion is also rare. The iconostasis and frescoes were last restored in 1995.