In Bilbao tourists are attracted by the ancient streets, famous museums, ultra-modern architecture of the newest areas and delicious Basque cuisine. Quite difficult to imagine that 30 years ago, tourists who came here, called the city a dusty maze of nameless streets.

Partly contributed to the development of tourism in Bilbao European Football Championship 2020! That’s why we decided to write this guide, so you won’t miss a single interesting spot. Meet our most comprehensive guide to Bilbao!

How to get to Bilbao

There are no direct flights from Moscow to the capital of the Basque Country, so you have to change planes. The most comfortable way to get to Bilbao is to fly with Iberia or Vueling via Madrid. The trip takes about 6 hours. You can also use the services of “Turkish Airlines” with a change of plane in Istanbul, “Brussels Airlines” via Brussels or “Lufthansa” via Frankfurt, but it may be cheaper to combine air and train.

For example, the central station in Madrid by train is about five hours away. The price for a one-way trip starts at 15€. The ALSA bus can also be hired for a four hour trip and you can get a ticket for about 10€.

If you catch a cheap flight to Barcelona, from Barcelona Sants station you can get to Bilbao in six hours and 30 €. Take the bus – you’ll spend about eight to nine hours and the ticket price starts at 36€ per direction.

You can buy tickets for these or other trains and get information about the cost of travel between cities through searching and buying tickets on the website Omio.Ru (former GoEuro):

How to get from the airport to downtown Bilbao

If you don’t come to Bilbao by train you still have to get from Aeropuerto de Bilbao to the center of the city, but it’s pretty easy – the Bizkaibus bus A3247 leaves from the airport. The cost per trip is 3 euros (you can buy it directly from the driver or at the ticket office). The time spent on the way – about twenty minutes. In winter, buses run at intervals of 30 minutes, in summer time – with an interval of twenty minutes.

To travel around the city you can use the city buses, metro, streetcar or cable car. The approximate cost per trip is 1.5-1.8€ (depending on the travel area).

If you want to make more than two trips, get the “Barik” card. You can use it when you travel on any public transport and save up to half of the cost of a single ride. The “Barik” card costs 3€ and you can top it up as well. When you decide to return the card you will get back the €3 and the money you have left on your account. The Barik card can be used by up to 10 people per trip.

The city bus network is represented by the company Bilobus. One trip will cost 1.25€ and if you have the “Barik” card the cost will be 0.65€. All local buses are painted scarlet.

Lodging in Bilbao: How much does it cost and where to stay If you want to live in a modern neighborhood of Bilbao, close to all the cultural values listed above, the Guggenheim Museum is the main reference point for your hotel search. Let’s list some of the best hotels in Bilbao, in which we ourselves or have already stayed or recommend to stay:

The designer hotel overlooks the Guggenheim Museum, has a reflection in its facade and flows seamlessly into the undulating lines of the atrium (room rates – from 7,000 rubles per night for two). It is now Number 3 on Tripadvisor’s traveler ratings.

One of the most interesting hotels is the chain Ibis Bilbao Centro, with a price of less than 5 thousand rubles per night – but don’t rush to book it! If you decide to stay at a chain hotel, first read our article on how to save money on it.

Find affordable accommodation in Bilbao right on this page with our Bookings.com widget.

Bilbao sights: what to see in 1 and 2 days 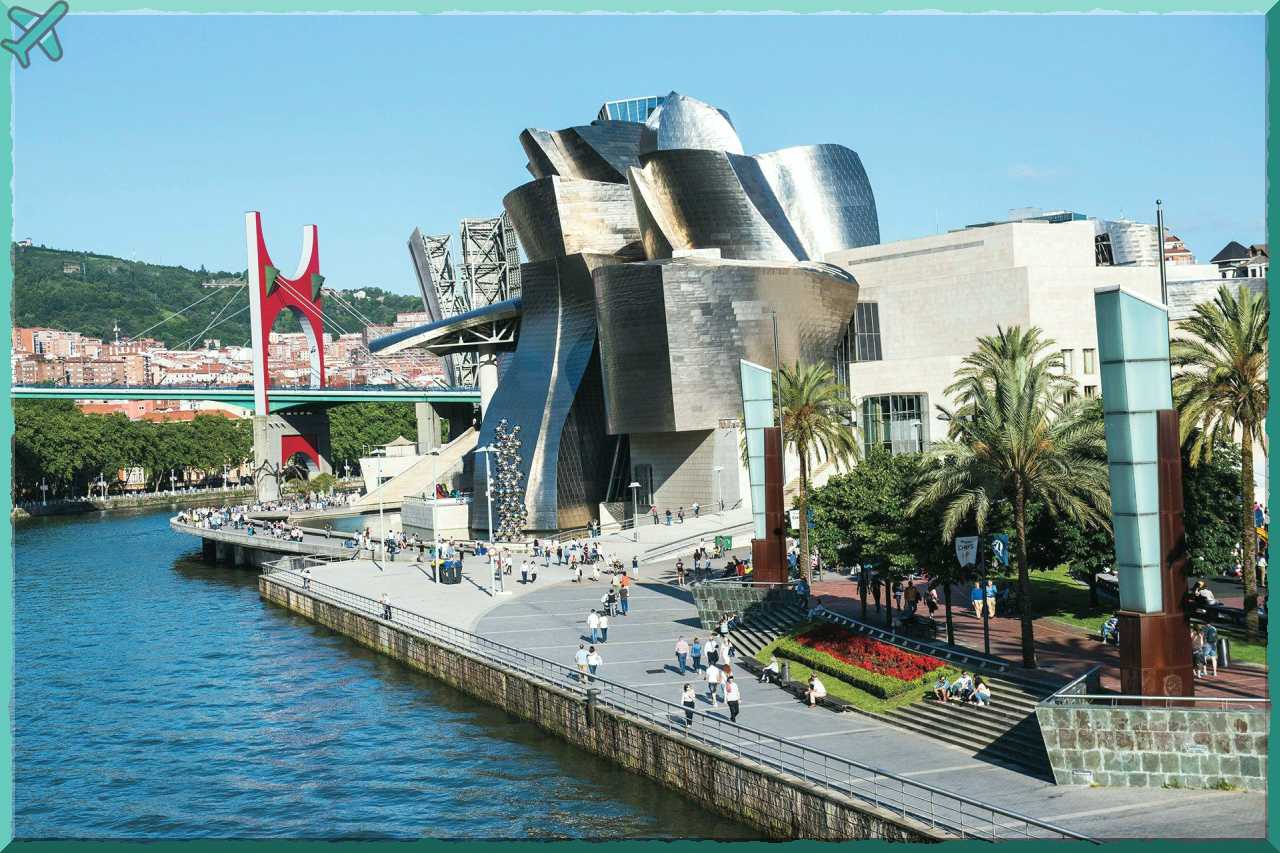 Having undergone an industrial boom, an outbreak of separatism and severe floods, the largest city in the Basque Country has radically changed its appearance and entered an era of cultural renaissance. Today the city is a huge architectural reserve, studded with creations of the most famous architects of our days. The city’s main historical value is the Old Center – a quarter with a protected status. Historians believe that there used to be an ancient city on the site of Old Bilbao, which was described by Pliny the Elder.

And we will start our journey on the right side of the river Nervión, here are all the charms of today’s architecture and some entertaining old buildings in eclectic style.

The museum building is a major landmark in the city. It is a fascinating example of modern architecture – the building has outlandish, futuristic forms and its contours resemble a huge bird or an intergalactic ship. It was designed by architect Frank Gehry. The building has an unmatched look in combination with the old houses. Some tourists see an unusually shaped flower in the museum building, with titanium and glass petals.

The museum was founded in 1997. It houses a collection of works by artists of our time: Picasso, Malevich, Miró and Kandinsky. At the entrance, visitors will meet Jeff Koons’ green sculpture “Puppy”. The skin of the “puppy” is made of living greenery, and an irrigation system is hidden in the middle of it. It is open Tuesday through Sunday from ten in the morning to eight in the evening.

The Palacio Euskalduna, another creation of current urban planning, serves as the Palace of Music and Congress. The building is located west of the Guggenheim Museum directly through the park alleys.

Afterwards, it is worth visiting the Museum of Fine Arts with masterpieces of the classics (Murillo, El Greco, Goya, Zurbarán), contemporaries (Gauguin, Caro and Bacon) and also masterpieces of native Basque artists Juan de Echevarria and Ignacio Suloaga and sculptors Eduardo Chillida and Jorge de Oteis.

The Palacio de la Diputacion (Palace of the Provincial Council of Biscayne) is an eclectic late 19th century structure of unparalleled splendor and elegance, facing the Gran Via. You can see it on a guided tour.

The Bilbao Town Hall (Casa Consistorial or Udal Etxea) is a stunning 19th century modernist structure by Joaquin Rucoba, erected where the Augustinian monastery used to be, on the left side of the Nervión River. Most eye-catching are the main staircase, the sculptures and the stunning decoration of the Arab Hall of City Hall.

We walk parallel to the river to the church of San Nicolas in the square of the same name. The ancient church of the beginning of the XVI century has undergone many floods by the waters of the Nervion and this caused its collapse. In the XVIII century, the church was rebuilt thanks to the diligence of Ignacio de Ribero and is now a stunning Baroque church.

The Teatro Arriaga is a large and splendid structure by architect Joaquín Rucuba, which has undergone fire and restoration. The Moorish-style ground floor of the theater, with French sculptures decorating its façade, is an oddity for this building.

The Archanda Lookout – From here you will have a scenic view of Bilbao from the Mirador de Artxanda. There are restaurants, hotels and a sports complex with a swimming pool on the mountain. The way to the observation deck is worth the trip. You can get to it from the central part of the city by taking the Archanda cable car. You can get there from Plaza del Funicularreko (Plaza del Funicular). The cost of a one-way trip is 0.96€.

Consider Bilbao’s video overview! It talks about places to eat and places to go, in addition to the sights. All in all, this video is a complete guide to Bilbao.

Before your trip to Bilbao you can read many articles and memorize all the sights, or you can just take a tour of Bilbao with a local guide, who speaks Russian! You can do this on the site of online booking tours “Tripster.ru” .

What and where to eat in Bilbao – inexpensive and delicious 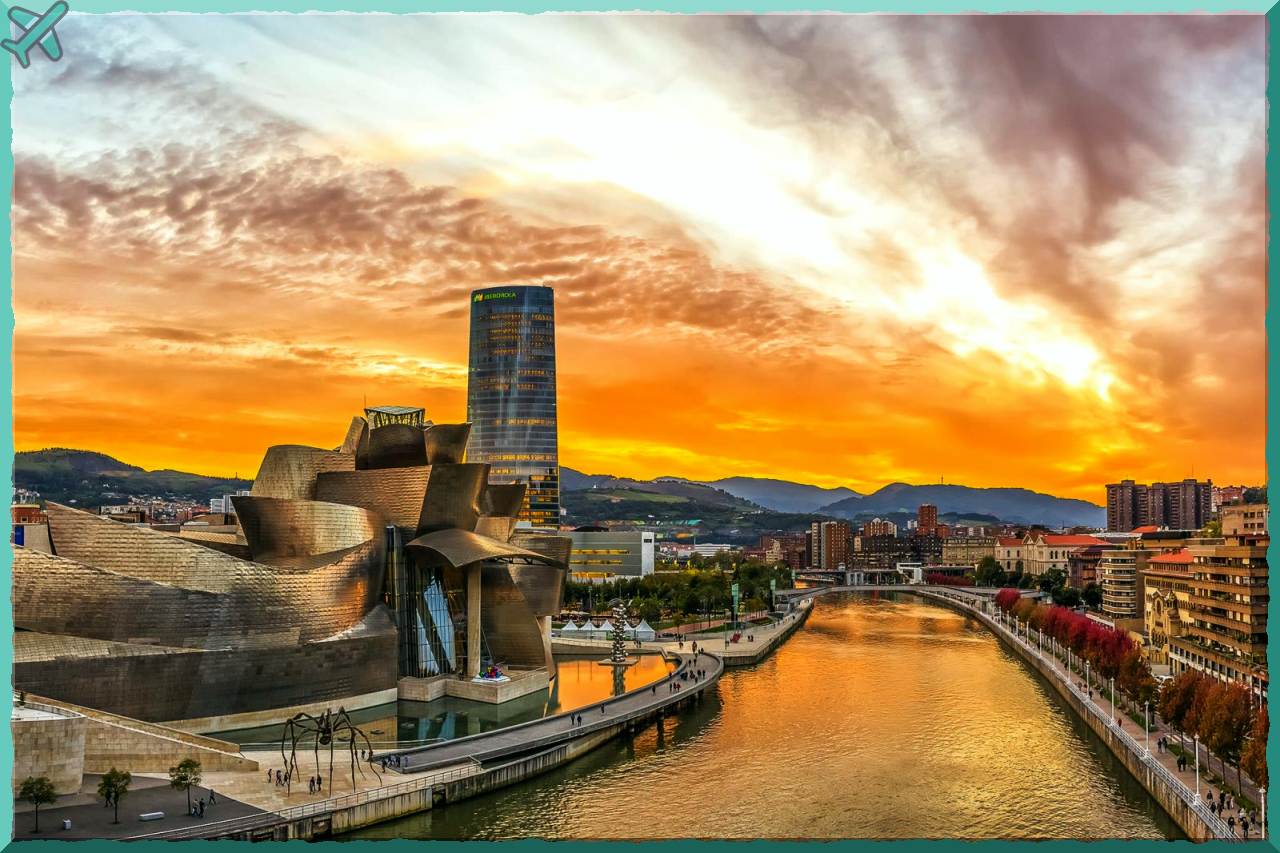 The basis of Basque cuisine is a huge variety of seafood, and they are caught in the Atlantic Ocean. In addition to seafood comes with vegetable slices and olive oil. The inhabitants of this region have their own variety of Spanish tapas, nicknamed pinchos, tiny sandwiches of a variety of products.

Tasty pinchos you can taste at Zuga bar on Plaza Nueva (the price for a pinchos is 1.6-2.6€). Cod baked in pots with garlic sauce and olive oil is one of the most popular dishes. The enormous portions and the most delicious cod in Bilbao can be found in the restaurant Guria on Gran Vía. Also, be sure to try the marmitaco (tuna stew), merlusa (hake-like) with greenish sauce, el changuarro (baked crab), inky squid, oysters, octopus and shrimp. We recommend eating seafood in a restaurant on the banks of the river Nervión Cubita Aixerrota. The local sweets are: Carolina cake, rice cakes, cherry pie, eclairs, and cuajada, a dessert made with sheep’s milk.

Here are the tastiest cafés and restaurants in Bilbao, as ranked by Tripadvisor and local review sites

In La Reina del Arenal – on the walls are engravings of small Dutchmen, under the ceiling – a large number of blocks of wood, as if someone is going to light a fire.

A stunning panorama of the river is from the white suspension bridge Subisuri, gently springing underfoot. Immediately by the bridge there is a bar called Tasaiz (Plaza de la Convivencia, Torre Isozaki 10), they serve white wine (from 1.51€ for a glass).

You will rarely find a free table at the restaurant Yandiola, so make your way to the bar for wine and cochas (Plaza Arriquibar 4, cochas 36€).

How not to get a drink?

It’s no secret that Spain practically lives with soccer, and Bilbao is home to one of the most famous and titled clubs in the kingdom – Athletic. The club was founded in 1898 and since the foundation of the Spanish Primera in 1929 (the highest division of soccer) has never left it! Only Real Madrid and Barcelona can boast a similar achievement.

Athletic Bilbao play their matches at the San Mames Stadium