Siena immerses tourists in an atmosphere of irresistible charm from the first minutes of their stay. Its winding streets and fascinating Gothic medieval buildings leave an unforgettable impression. The final touch to an already colorful and positive picture of a visit to Siena is sampling the delicious food here.

The cuisine of Siena consists almost entirely of old Tuscan recipes, but local chefs try to keep up with the times and add a touch of innovation to the technology and recipe of traditional dishes. The main viands of Sienese cuisine are soups, roast meat, game and several kinds of handmade pasta. All these dishes are made from the freshest ingredients of high quality with the addition of aromatic herbs and extra virgin olive oil. But the most popular dish in Siena is considered to be the dessert. They are a must-try for all tourists, even for those who are indifferent to sweets. Among the considerable number of desserts are Panforte, a spicy cake with nuts and candied fruits, and Ricciarelli, an unsightly but very tasty almond pastry.

Tourists can make sure of the unsurpassed taste of local desserts during a visit to Pasticceria Nannini . Here they make very tasty “panforte” and “panpepato”. Both treats consist of similar ingredients. However, in addition to nuts, candied fruits and honey, “panpepato” also contains pepper, which adds spice to the dessert and explains.

What excursions in Siena are worth visiting?

A small Tuscan town Siena surprises tourists not only by its stunning beauty and rich history, but also by its many attractions. Even enumerating all of them will take a lot of time, and the more so to see them. So tourists have to make a choice – either to stay in Siena for several days and go sightseeing, or visit the city in a hurry and be satisfied with the results of the sightseeing tour. Either way, travelers will still get to experience the medieval atmosphere of the city and experience its charms.

Tourists can enjoy the beauty of Siena during self-guided walk through the main city squares, winding medieval alleys and narrow streets, squeezed between the walls of ancient stone buildings. This is not difficult, given that much of the city is a pedestrian zone and motorized vehicles are forbidden in the most interesting corners of Siena. So, tourists can easily see Piazza del Campo The Piazza del Campo, surrounded by splendid high buildings, such as the Palace of Sancedoni, the Town Hall, and the graceful pink Torre del Mangia. 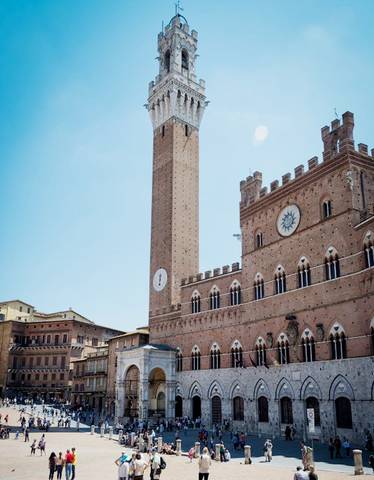 Afterwards you can go to Piazza del Duomo The city’s main cathedral, the Duomo of Siena, is located in Piazza del Duomo. The building of the cathedral, built back in the XIII century, to this day delights the guests of Siena and local residents.

What to see in Siena?

The quiet Tuscan town of Siena in the Middle Ages was the capital of the influential Republic of Siena, the center of cultural life of the Italian Early Renaissance. The historic center of the city is perfectly preserved thanks to the competent building in the subsequent centuries and this allows tourists in the XXI century to feel the atmosphere of the Middle Ages, wander through the narrow paved streets and admire the Gothic palazzi and cathedrals.

An amazingly beautiful building is the Cathedral of the Assumption of the Blessed Virgin Mary of Siena. The cathedral, built on the foundations of a former building, is in the shape of a cross and finished in white, black and red marble, has a dome, a domed lantern and a bell tower. The interior of the cathedral is also striking in its opulence and splendor – a decorated pulpit, a marble floor covered with mosaics depicting religious themes and a statue of John the Baptist by Donatello. The cathedral has a museum, the Opera del Duomo, which houses such exhibits as the cathedral’s stained glass windows and an altarpiece by Duccio called “Maesta,” the best work of its kind. The cost of admission is €3 concessionary, €6 full price.

READ
Australian Cuisine: What to Try and What Not to Try

The cathedral baptistery, just behind the cathedral, is painted with frescoes. There is also a font of marble and bronze, as well as a statue of John the Baptist. The entrance fee to the baptistery is also 3 euros.

The Cathedral Square, or Piazza del Duomo, is the center of the city’s religious life. Here, in addition to the cathedral and the Duomo Museum, the arch of the facade of the new, so… read completely

Shopping in Siena can bring a lot of fun regardless of whether you plan to go shopping for designer things in chic boutiques, search for handmade textiles in a small shop or buy gift souvenirs for relatives and friends in the street market. In any case, by the end of the race through the outlets of the city your wallet will lose some weight and your luggage will be filled with a couple of new things or memorable trinkets.

In Siena, every tourist if you want can find something that interests him – a wine store, expensive boutique or tent selling the creations of local artists and craftsmen. The most common souvenirs that most travelers bring from a trip to Siena are leather goods, local ceramics and pretty handicrafts with the original symbols of one of the areas of the city. By the way, you can spend a little time and collect the original set of souvenirs, consisting of 17 products. And each of the elements in the set will be associated in some way with one of the contradas (neighborhoods) of Siena. And it will be easiest to do it during a walk through the city, buying in the visited area a miniature copy of a personal contrada flag, a piece of jewelry with exclusive symbols, or an amusing product in the form of a caterpillar, snail or eagle – a symbolic creature.

As for the local leather goods they are not inferior to those sold in the stores of Florence and Milan.

What is on sale in Siena and where?

The main shopping streets of Siena are Via di Citta, Via Dei Montanini and Banchi di Sopra. All of them. read in full.