What to see in the village of Cuneo – Villar San Costanzo, Italy

In the province of Cuneo we find a small village of truly incredible charm . We are talking about Villar-San Costanzo with a population of about 1500 people and an ancient origin, which is easy to notice by its paved streets and stone buildings. The toponym probably dates back to the Middle Ages, when the Piedmont language was spoken in Occitan.

The town has several historical and cultural attractions that are worth visiting . This village is the perfect place to enjoy a trip out of town, especially for those who want to combine nature – thanks to the unspoiled forest landscape – and history.

So, let’s find out what to see in Villar-San Costanzo, in the province of Cuneo.

The toponym of the village has a very important historical connection. Legend has it that in 303 AD San Costanzo, a Roman soldier of the Theban legion, was martyred .

This event gave birth to the project of the Abbey of San Costanzo al Monte, which gave life to a village at the mouth of the Maira Valley. Some time later, in the 8th century, the Lombard ruler Ariperto II commissioned the Abbey of San Pietro in Vincoli, now a parish church. 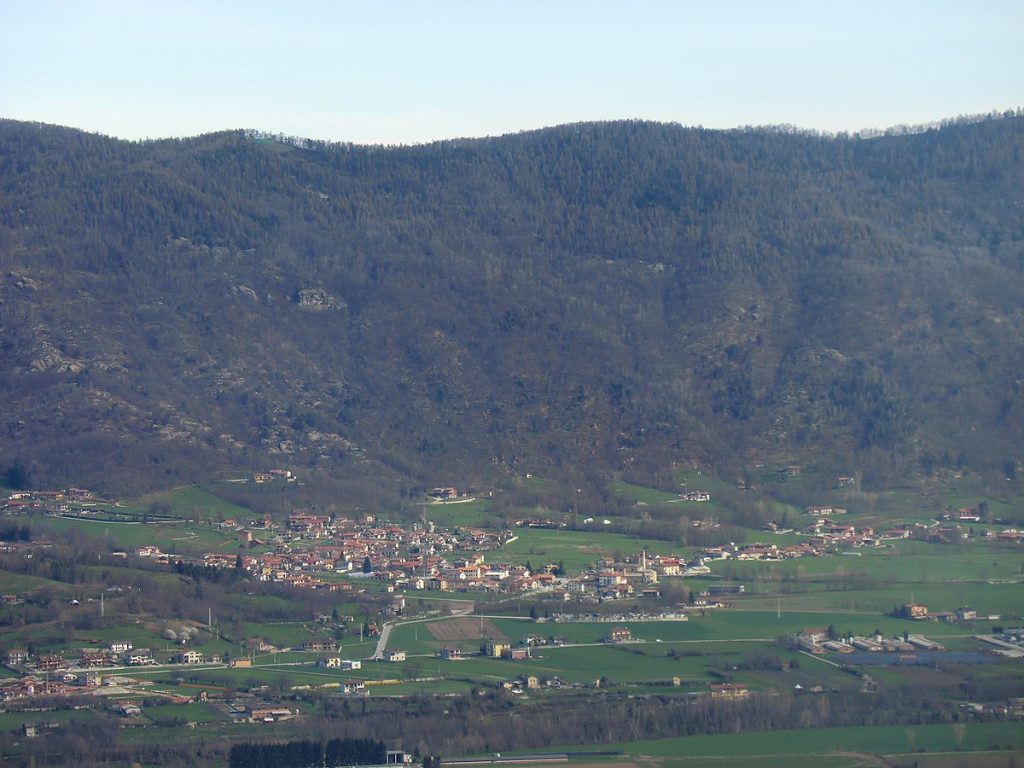 The Benedictines of this abbey played a fundamental role in the birth of the residential center as they developed the historically marshy territory. The most characteristic feature of Villar San Costanzo are the Chichiu: peculiar formations resulting from river erosion of the soil. A protected reserve dedicated to the protection of the Chichiu has also been established: the Chichiu del Villar Nature Reserve, among which these special formations in the form of giant mushrooms are found.

Today, the city, despite its small population center, offers a number of attractions that can entertain the visitor even for a few days. The natural reserve of Chichiu del Villar is the protagonist, but there are other places in the municipal area worth discovering.

READ
The 30 best sights in Milan - descriptions and photos 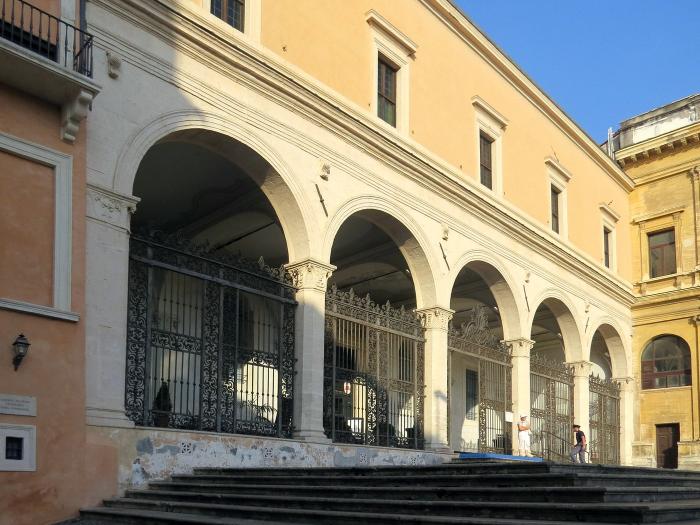 The original structure was destroyed during a Saracen raid in the 10th century, was first rebuilt between the 11th and 12th centuries, and then reworked and expanded centuries later. The peculiarity for which the church is known is the marble slab, “dirty” with reddish stains: folkloric tradition says that this is the stone on which San Costanzo was martyred. Of interest is the chapel of Costanza, from which one can enter the ancient Benedictine crypt, dating back to the 11th century and divided into three naves.

It is one of the most interesting monuments of Romanesque architecture in the province of Cuneo. The work we admire today has an eighteenth century facade, while the building was rebuilt in several stages between the eleventh and thirteenth centuries. The sanctuary consists of two churches located one above the other. 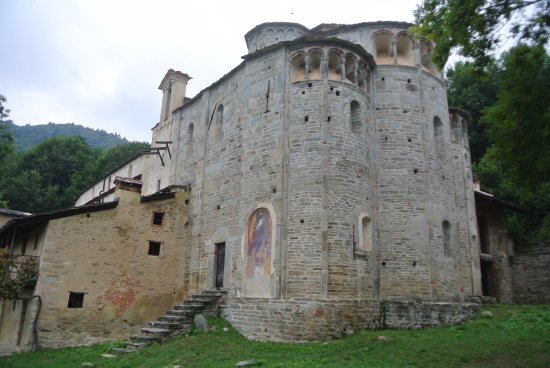 The upper church has a three-nave interior, richly decorated with frescoes dating back to 1000, depicting the stories of Adam and Eve. It is presented in the typical Lombard style, with detailed carved capitals depicting animals, plants and monsters.

The lower church, on the other hand, has a small area that is thought to belong to the original design, which existed before it was destroyed by the Saracens. We are talking about the eastern part of the church, which, according to some speculations, may be the tomb of an ancient church of the eighth century. In 2019, a very recent restoration was carried out that returned the historic monument to its splendor. On this occasion, frescoes depicting episodes from the life of Jesus were discovered on the perimeter walls.

Sanctuary of Santa Maria Delibera . Returning to town, we stop at the sanctuary of Santa Maria Delibera, encountered on the way to the previous monument. Immersed in a charming forest landscape, about 740 meters above sea level, the sanctuary has a very interesting Romanesque apse outside with a really valuable entrance portal. Built in the 11th century, a chapel was erected in the following, which today is attached to the main body of the church behind the main altar and has been declared a national monument.

We also find reproductions of Lombard buildings and a castrum, a typical Roman era fortified camp. The headquarters houses a rich collection of ancient artifacts that span the time period from the Iron Age to the Middle Ages. To further enhance the ARC, there is a multimedia library dedicated entirely to historical and archaeological subjects.

READ
The 30 best sights in Tbilisi - descriptions and photos

Chichiu del Villar Nature Reserve . We conclude our journey among the sights of Villar-San Costanzo in the Chichiu Special Nature Reserve, located in Costa Pragamonti, between Busca and Dronero. The reserve has famous and fascinating phenomena of fluvial soil erosion, known as erosion poles. 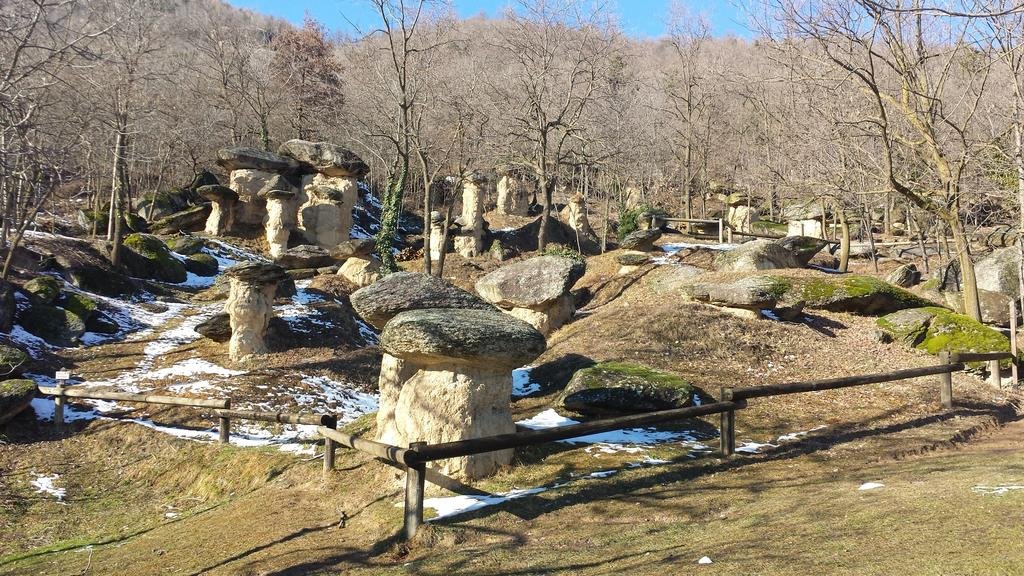 The reserve covers about 64 hectares at an altitude of 670 to 1350 meters above sea level and can be visited all year round . These pyramidal columns are located at the foot of Monte San Bernardo and look very much like giant mushrooms.

Cuneo is a town among forests and mountains, rich in history and ancient traditions. Art, gastronomic delights, literary festivals: it is clear that Cuneo is one of the underrated treasures of the real Italy for foreign tourists.

The structure of the streets has been preserved since the Middle Ages, but the main secular and religious buildings appeared already in the Baroque era. However, from that era have survived some buildings: for example, the Gothic monastery complex of St. Francis. The main street of the city is the wide, portico-framed Via Roma, once a market place and now Piazza Galimberti (formerly Victor-Emmanuel II). 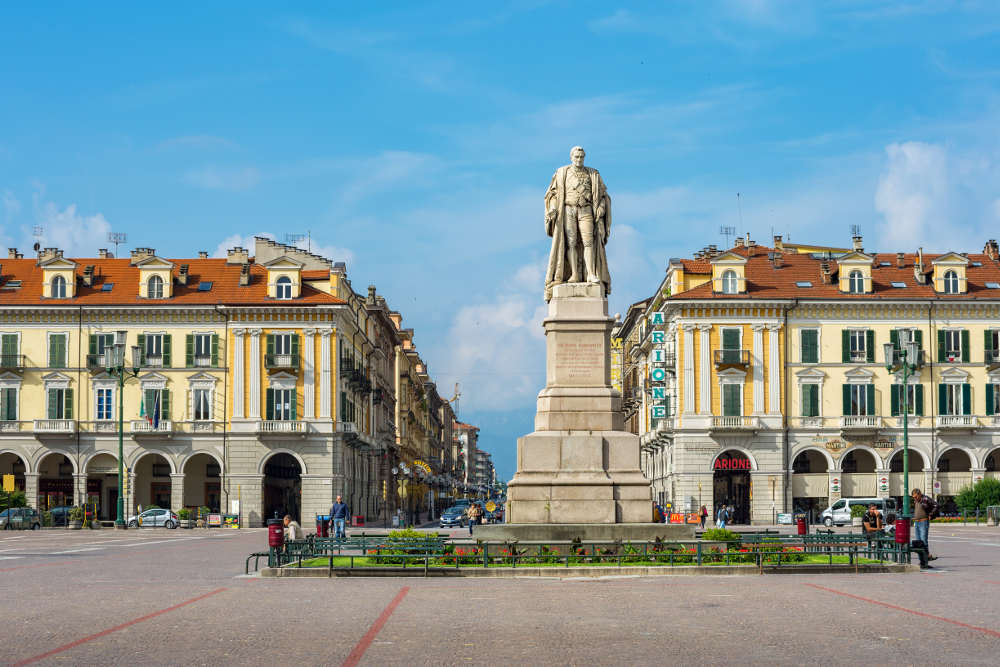 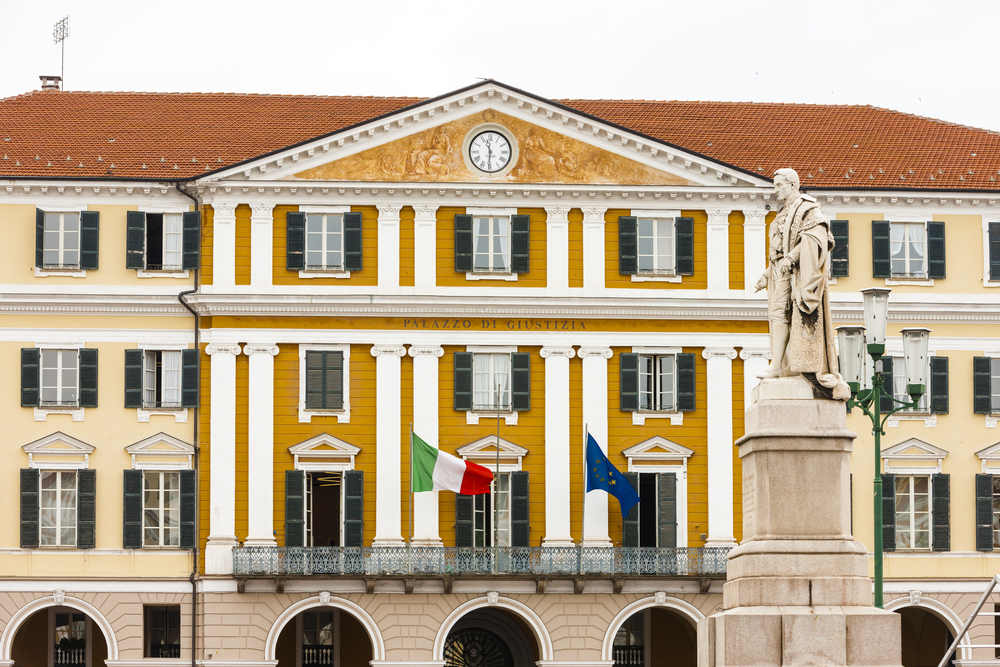 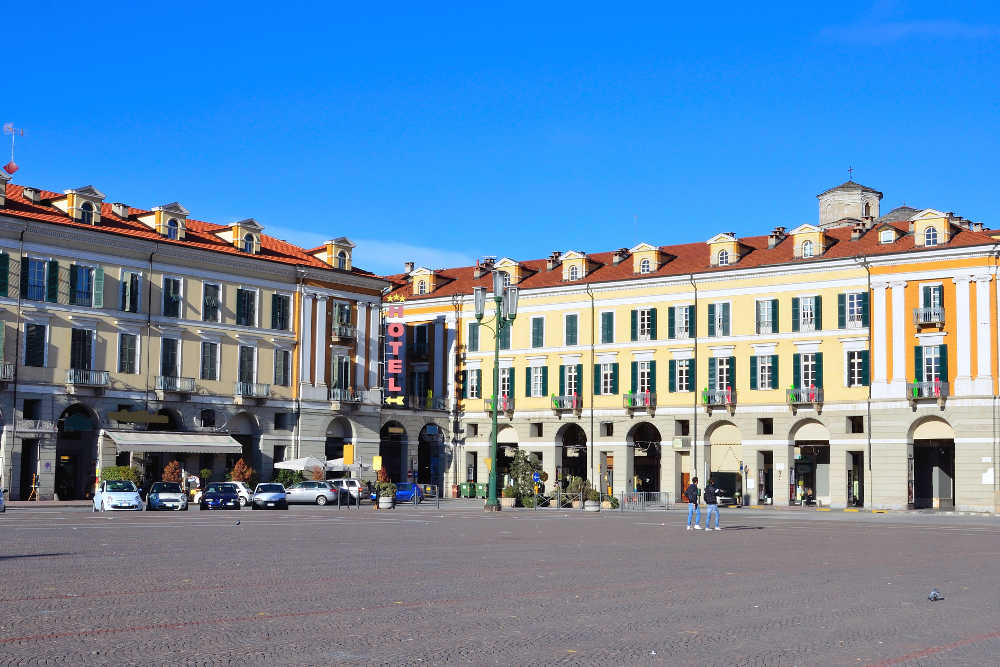 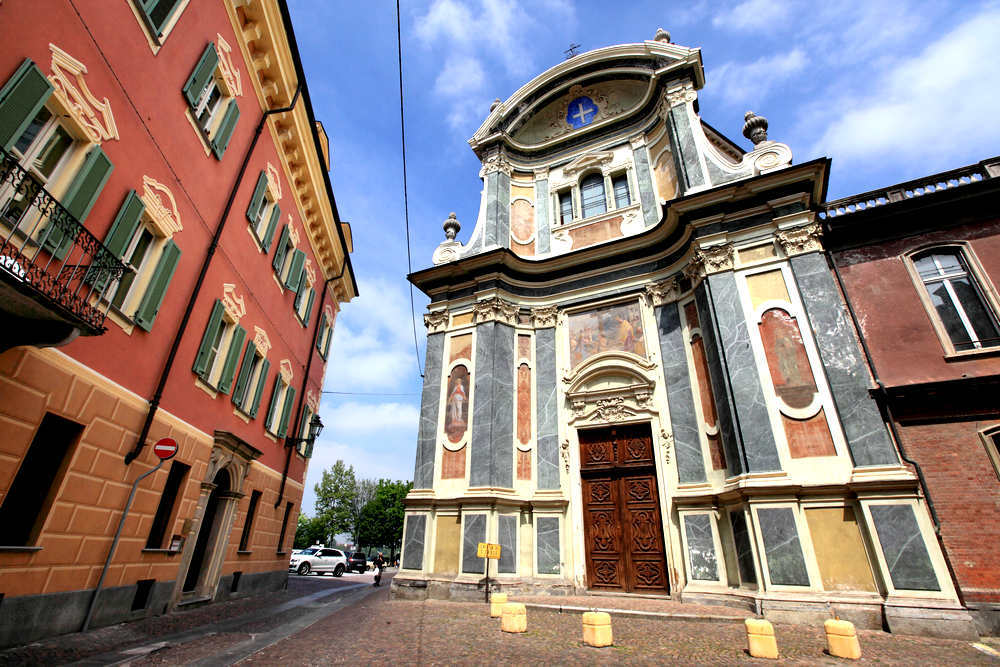 In addition to the historic center preserved in the northern part of the city, the Via Maestra, which runs from north to south through Porta Cuaranta, is worth seeing the church of Santa Maria del Bosco and a wander through the Contrada Mondovi, a medieval quarter with narrow streets decorated with porticoes.

Piazza Galimberti was formed between 1835 and 1886. It is particularly beautiful because of the severe symmetry of the palazzo overlooking it and the tall porticoes of the buildings. The panorama of the Alps on the horizon serves as a backdrop for the Via Nice. 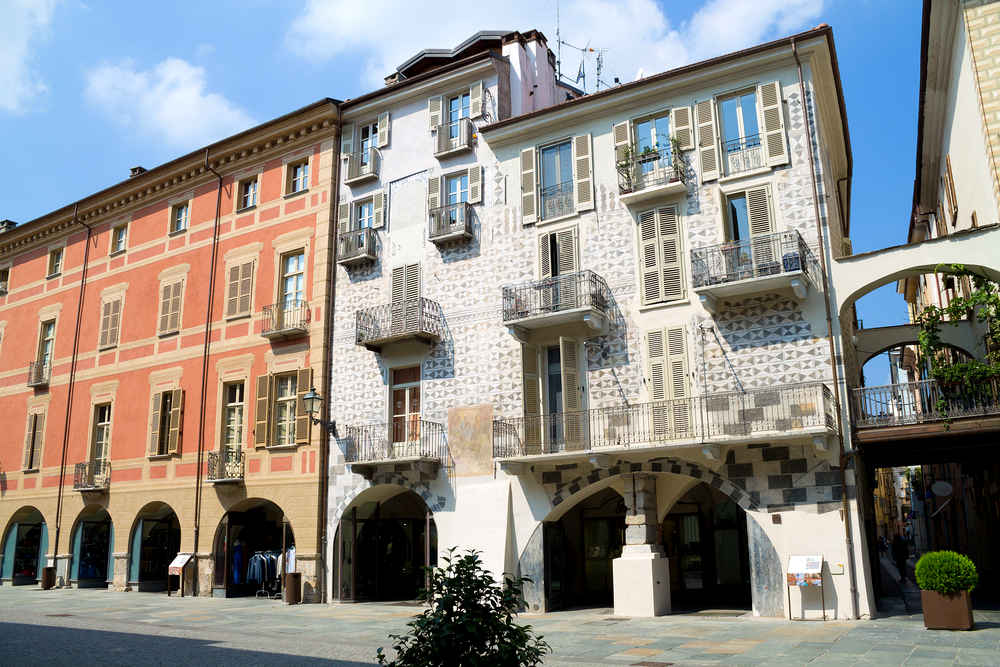 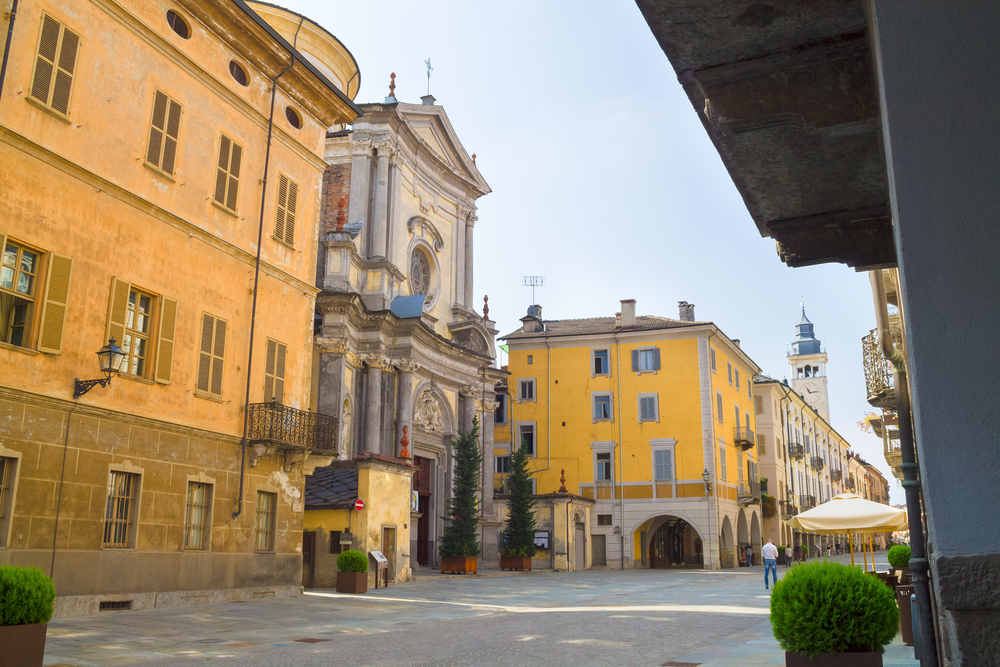 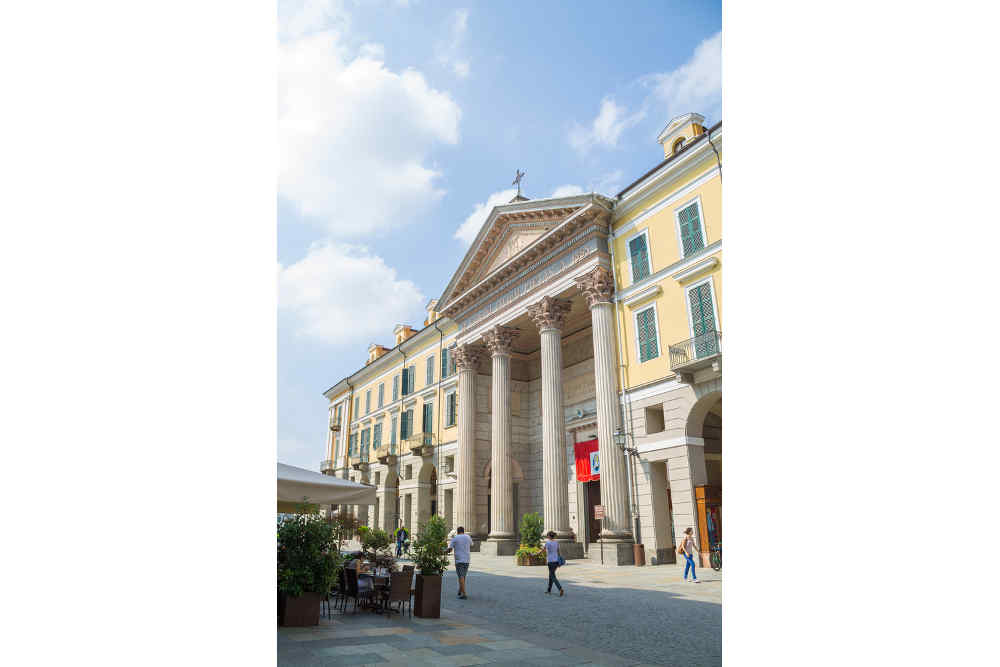 After leaving the square via Viale degli Angeli, head towards the church of Santuario della Santissima Vergine Maria. It is a very scenic route because of the panorama of mountains that opens up to the eye. A long bike path goes past the park with a monument to the Resistance by Umberto Mastroianni.

Architecture lovers will appreciate the liberty and rational style buildings. At the entrance of the town is the Saleri viaduct: an 800-meter high, 50-meter high bridge consisting of 34 arches. 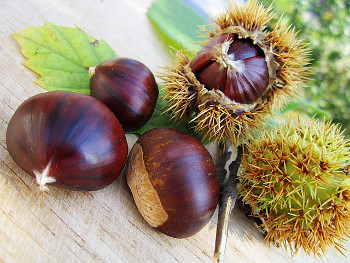 Cuneo, like other cities in the region, has a popular Piedmontese tradition of café-salons, where in a spacious room you can have coffee with local sweets, above all meringue and “cunezi alrum”, which has become a nickname in Italy for chocolate sweets with rum. Cuneo is also famous for its chestnuts, with an annual chestnut fair in October. 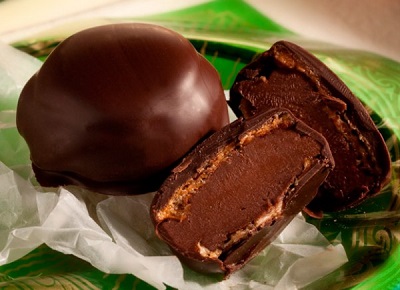 Cuneo’s rum candies became so popular at one time that they became known even outside the country. In 1954 the publisher Arnoldo Mondadori advised Ernest Hemingway to stop in Cuneo to buy a few boxes. And indeed, on March 8, the famous American writer appeared on the doorstep of the Arione confectionery, and between autographs and handshakes he did not forget to buy a supply of “cuneizi” to “sweeten” his upcoming stay in Nice.

Today Cuneo is a lively town with several markets and many craft shops. The literary festival Scrittorincittà (“Writers in the City”) takes place here, justifying its fate at the crossroads of peoples, ideas and goods.

By car Cuneo is connected to Turin and the Ligurian coast by the A6 Turin-Savona freeway (exit Mondovi). An alternative route is the SS.20.

By train There are two stations in Cuneo: the central station and Cuneo “Jesso”. The latter is very close to the historic center.

By plane The nearest international airport, Caselle, is in Turin. Local flights are served by Levaldigi airport, about 30 km from the city.