Finland’s best and most beautiful cities Finland’s best and most beautiful cities

Most visitors to Finland either head to Helsinki, its pleasant capital on the Baltic Sea, or to Rovaniemi in winter to see Santa Claus and the Northern Lights. Although the rest of Finland is not as famous, it has a lot to offer. From charming coastal towns in the south to the scenic wilderness of Finnish Lapland in the north, here are five of the most beautiful cities to visit in Finland.

1. Porvoo, one of Finland’s oldest cities 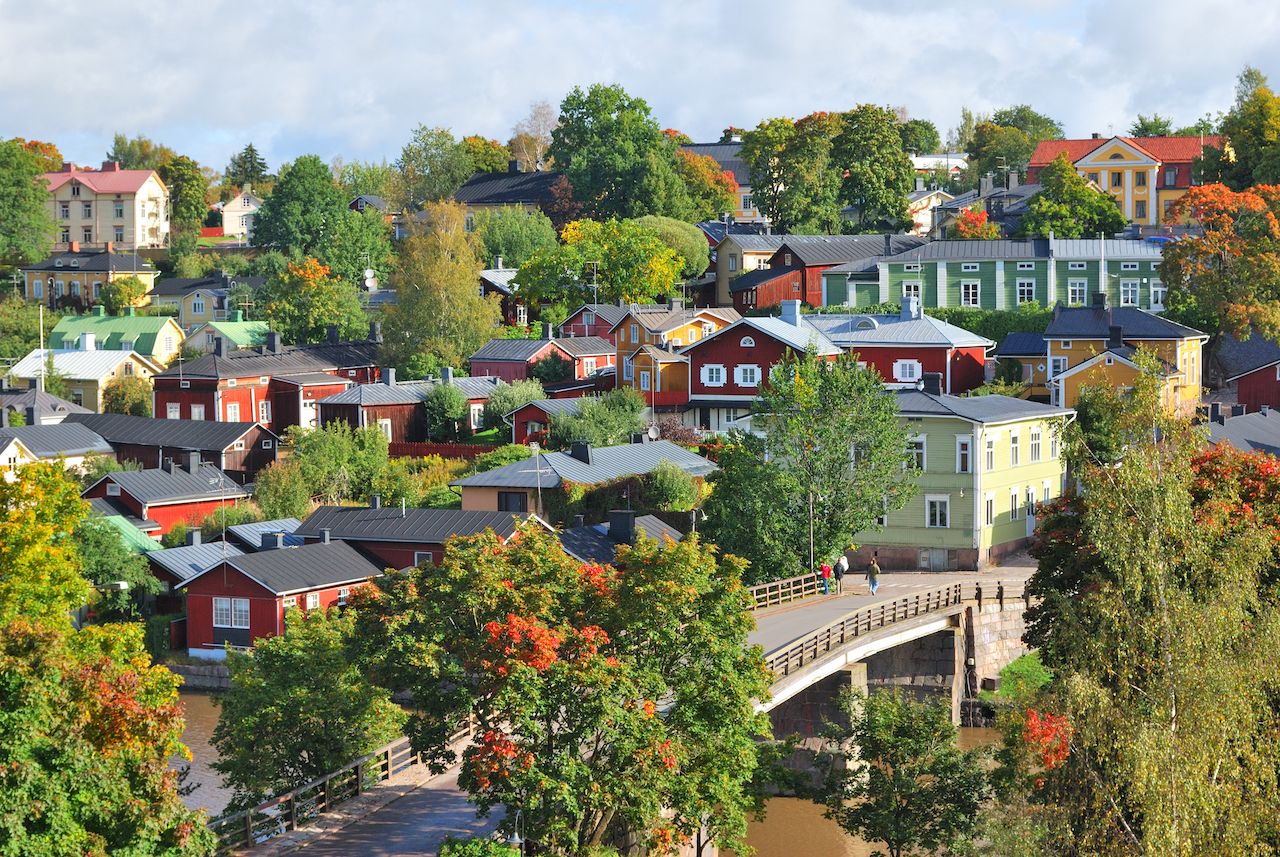 Porvoo is one of the oldest towns in Finland, founded nearly 700 years ago. It’s a little over 30 miles from Helsinki and in the summer you can take a steamboat from the capital to Porvoo. Although it is not a coastal city, Porvoo is connected to the Gulf of Finland via the Porvoo River, which flows through the city. Historically, Porvoo has been an important trading center, and its coastal houses have been used to store exotic goods from other countries. With its brightly colored wooden houses and cobblestone streets, Porvoo is also one of the most photographed cities in the country. The streets of Old Porvoo are filled with small stores, cafes, galleries and museums. You can visit the Porvoo Doll and Toy Museum and reminisce about your childhood or learn how a wealthy merchant family lived in the late 18th century at the Porvoo Museum. When it comes to shopping, Porvoo’s designer stores, whose styles range from vintage to modern, are known throughout Finland.

Since the 19th century, people have traveled from Helsinki to Porvoo to visit its cafes and restaurants. Everything in Porvoo has a long history, like the SicaPelle restaurant, which is in the home of artist and sculptor Ville Wallgren and has been voted the best restaurant in Porvoo. If you’re looking for something sweeter, the Brunberg Chocolate Factory is known by all Finnish children and its home is in Porvoo, which also has a store. Utsjoki is the northernmost and smallest municipality in Finland, consisting of several small Sami, as the locals call the Sami in Finnish villages in the middle of the northern wilderness. Although the population density is about one person per 1, 5 square miles, there is still much to do in summer and winter.

Much of the Utsjoki area consists of protected nature reserves. In summer, spend your yötön yö – which means “night without night” in relation to the midnight sun – hiking or biking along beautiful trails that stretch for hundreds of kilometers. Many of these trails start at the village of Utsjoki. In winter, you can take your skis or snowshoes, or rent a snowmobile, and glide across the sparkling landscape in the endless night of Kaamos or “polar night,” which lasts all day. If you want to travel as far north as possible in Finnish Lapland, Nuorgam is your destination. Nuorgam is located on the Norwegian border, just a few hours drive from the Arctic Ocean. Here you can visit Suvanto Summer Café, the most northern café in the European Union. The northern border is the Tenoyoki River, where people have been fishing since the Stone Age. Together with Sami, Finnish and Norwegian fishermen, you can fish under both the midnight sun and the northern lights.

The easiest way to get to Utsjoki is from Ivalo airport, which is only two hours away by car with daily flights from Helsinki. Alternatively, you can fly to Kirkenes airport across the Norwegian border and make the 2.5-hour trip to the Arctic Ocean coast.

3. Savonlinna – a city built on islands The Savonlinna region is one of the best places to experience the tranquility and grace of Finland’s lakes. Savonlinna is a city built on islands and Lake Saimaa is always close by. Lake Saimaa is the largest lake in Finland and home to the Saimaa ringed seal, an extremely endangered species found only here.

The Savonlinna area is a paradise for those who love nature. In Linnansaari National Park you can find some of the best lake scenery in Finland and where you can try to catch the Saimaa ringed seal. In summer, the best way to explore the area is by canoe or boat. In winter, ice skating, which is designed to cover long distances and is different from regular ice skating, is the best way across the frozen lake. View to Olavinlinna Castle and lake from the shore, Savonlinna, Finland

Savonlinna itself is known for the Savonlinna Opera Festival, which is a world famous cultural event. It is held annually in medieval castle Olavinlinna. In addition to the festival, Savonlinna hosts a number of other forms of live music, art and theater. Savonlinna is surrounded by small counties and villages, each offering their own attractions and activities. The town of Kerimäki has the world’s largest wooden church.

Savonlinna is located in eastern Finland, near the border with Russia. It is easily accessible by train, plane, car or bus. The trip from Helsinki is about four hours, and Savonlinna also has a small airport that offers domestic flights to and from Helsinki.

4. Naantali – resort town and home to the world of Moomin A view over Old Town and boat harbour on a summer day in Naantali, Finland

Naantali, the resort town, is known for its happy and sunny atmosphere. Every Finn knows Naantali by the phrase hymyilee kuin Naantalin aurinko, which means ‘smiling like the sun in Naantali’ and refers to someone who looks very happy.

READ
Top 7 most beautiful deserts that everyone should see

This smiling city is home to Moomins, cartoon characters known to every Finnish child. Moominworld, with its blue tower house, is located on an island right off the coast, easily accessible by car, bus or boat. Naantali also hosts Kultaranta, the summer residence of the president of Finland. It was originally the summer villa of merchant Alfred Kordelin, which has housed the president of Finland since 1922. At the beginning of the 18th century, rumors began to circulate that the Viluoto spring water helped alleviate the symptoms of many diseases. This is said to be the basis of Naantali’s spa activities, which officially began in the early 1800s. The current spa pools and treatments in Naantali are run by the Naantali Spa Hotel.

Naantali is located in close proximity to Turku, the oldest and second largest city in Finland. Trains run hourly from Helsinki to Turku and the trip takes two hours. From there you can easily get to Naantali by bus. Since Naantali is a coastal city, you can also reach the city by boat and explore the surrounding archipelago.

5. Mariehamn – the capital of Swedish Finland Mariehamn is the capital of the Swedish-speaking autonomous territory of Finland, the Åland Islands. It is an archipelago of 6,700 islands in the Baltic Sea. The people of Mariehamn and the Aland Islands in general lead a relaxed islander lifestyle and are very hospitable. Mariehamn, like many coastal towns in Finland, comes alive in summer. It is easy to get around on foot or by bike, as Mariehamn is located on a peninsula with harbors on either side. It is also only a 10-minute walk from the western harbor to the eastern harbor.

Everything in Mariehamn contributes to the maritime atmosphere, and the best way to discover the heritage of the Åland Islands is to visit the Åland Maritime Museum. If you’re in the mood to shop, Sjökvarteret (Maritime Quarter) is the place to find local craft shops, silversmith workshops and a marina for traditional wooden ships and boats. For cafes and restaurants, head to Torggatan Street for local cuisine.

READ
The 'Star Wars' galaxy: Where you can go on a trip In addition to visiting Mariehamn, you can rent a bicycle or boat and explore the rest of the Aland archipelago. If you like to play golf, Ålands Golfklubb is one of the most beautiful golf clubs in Finland. The Smakbyn restaurant is located next to the clubhouse and is probably the most famous restaurant in Ålands.

Mariehamn is easily accessible as ferries and boats from Helsinki, Stockholm, Tallinn, Turku and Naantali run several times a day. You can fly to Mariehamn from Helsinki, Turku or Stockholm, but we recommend you take a ferry or boat. The scenery in the archipelago between Finland and Sweden is beautiful. Where are the most beautiful people in the world? Matador Network Matador is a travel and lifestyle brand that redefines travel media with the latest adventure stories, photojournalism and social commentary

The best and scariest ghost towns from around the world The best and most beautiful cities to visit near Venice Veneto, one of Italy’s northeastern regions, is mostly known for Venice, but it has many other cities to visit. Find out which ones are.

The best botanical gardens in the world, the biggest and most beautiful The biggest, hardest, craziest corn mazes in the United States The largest and most impressive corn mazes in the U.S. include Cool Patch Pumpkins in California, the Great Vermont Corn Maze and Happy Day Farm in New Jersey