The underworld: the longest cave in the world 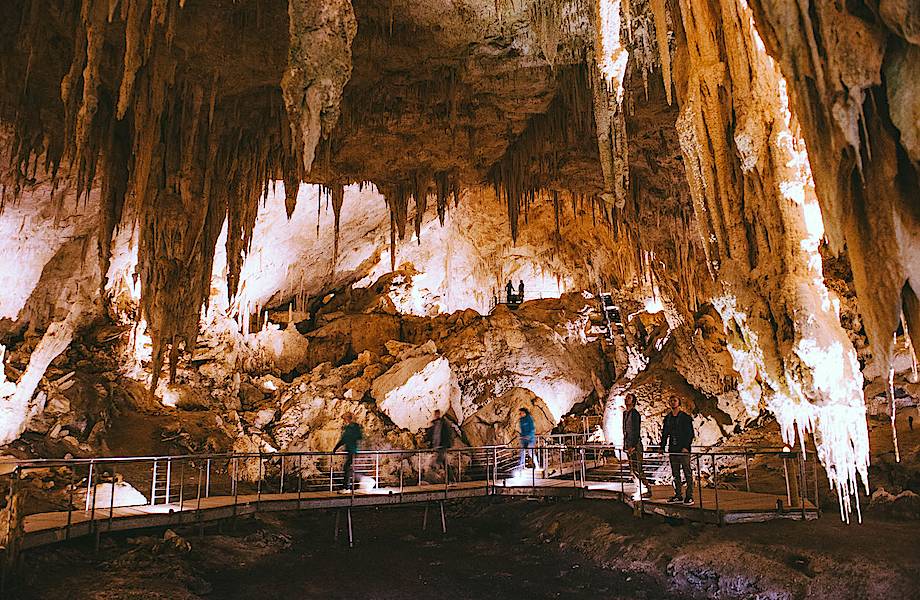 The underworld has always attracted mankind: in ancient times it was home to the gods and were sanctuaries. In the modern world they are actively explored, recreating the history of the development of the planet by them. In search of adventure in the caves come and travelers: eerie underground corridors, decorated with stalagmites and stalactites slightly scare and excite the imagination even experienced tourists. And the longest cave in the world is especially interesting.

Mammoth Cave – the longest cave in the world, is located in the United States in Kentucky. It is a real underground kingdom, its galleries and corridors stretching for almost 650 kilometers. And this is only the explored part; so far no one knows what the real size of the giant is. Regularly there are discoveries in this area, new halls appear, new exits and connections with other caves, and every year its length increases. Today there are about 20 large halls, as many deep shafts, and 225 underground passages. It is scary to think about, but if one gets lost in this labyrinth, then one simply cannot get out of here. 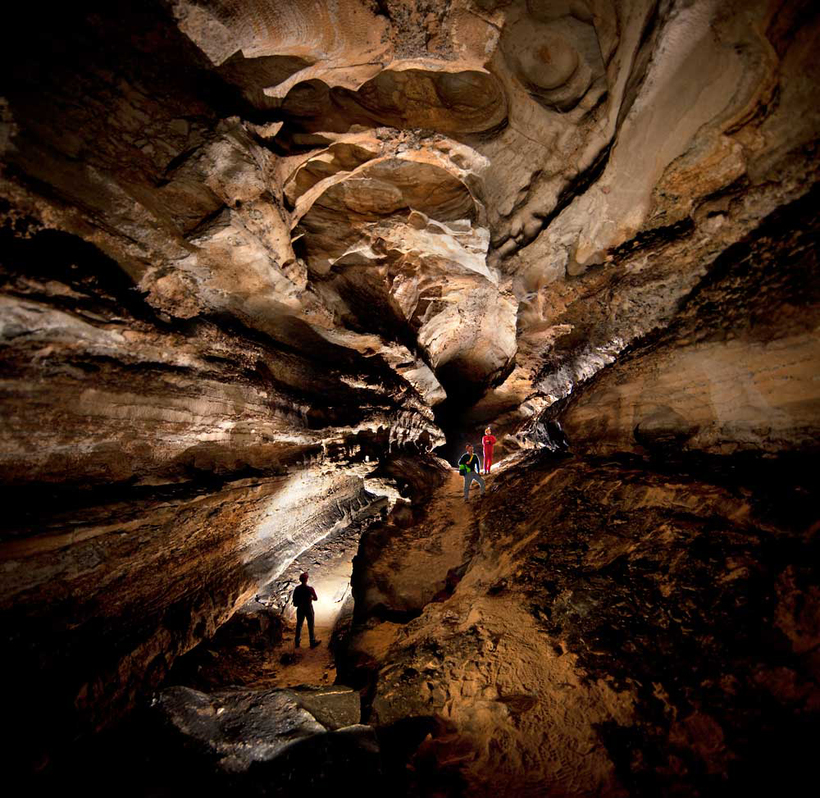 Mammoth Cave – it’s a whole world. It has its own lakes, waterfalls and rivers. It has its own inhabitants, some of them can’t be found anywhere else on the planet. For example, there are eyeless fish, albino shrimp, and cave salamanders. Some of these creatures may seem creepy: for example, some species of cave salamanders (and this is a type of lizard) have no eyes or lungs, others are pale pink in color. But that’s actually how evolution intended it: the animals simply adapted to their home.

What does this have to do with mammoths? 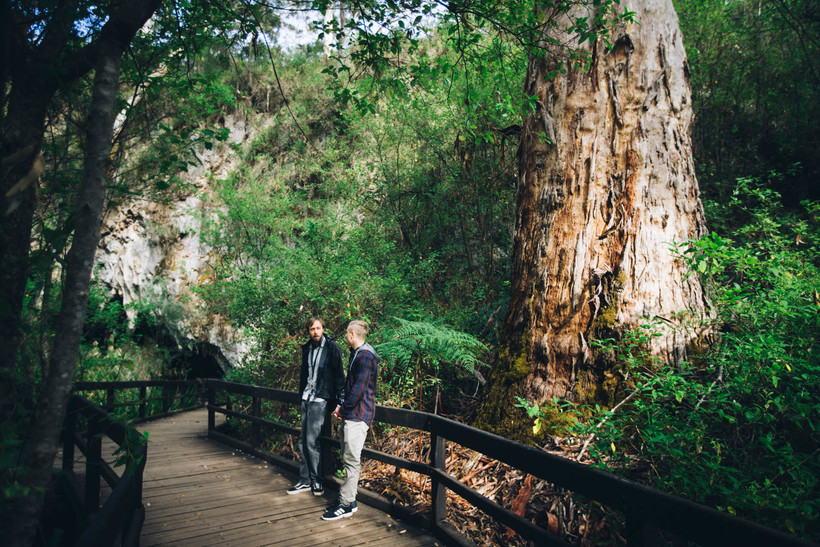 Of course, mammoths were not found in the cave. The fact that mammoth is translated from English not only as “mammoth,” but also has another meaning – “gigantic, huge. So you can not tell better, because some of the entrances to the cave and its halls are actually gigantic.

READ
The first trip with a baby 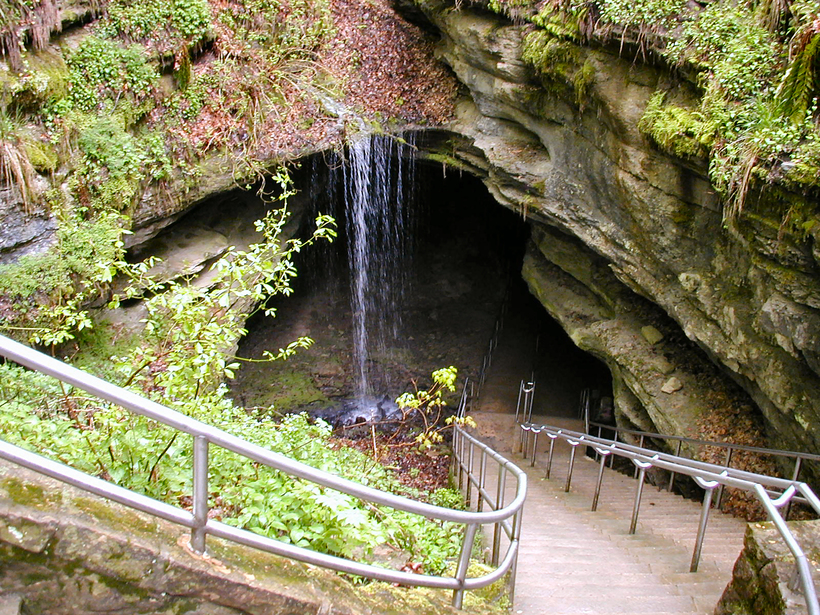 The Mamontova Cave was created about 10 million years ago. Once a river flowed through its passages, which eventually disappeared, washing out the giant corridors in the rocks. Rainwater also did its work, seeping into the cave for centuries and sculpting fanciful shapes in the rocks. The first human-related finds are about 4,000 years old. So Native Americans were very familiar with the cave: Native American mummies and burials have been found here. In those distant times, torches were used to light the dark galleries from bundles of reeds that still grow near the cave entrances. For many kilometers, scientists have found the remains of these ancient lighting devices. American colonists first discovered the cave in 1797. And over the course of more than two centuries, there has been a lot going on here. For example, at the beginning of the XIX century, in the midst of wars, potassium nitrate was actively mined here and used to create black powder, the first explosive. And in the cave even opened a hospital. The fact is that one of its owners, physician John Croghan, was interested in the special climate of the underground kingdom and decided that humidity and low temperatures would help cure tuberculosis. Therefore, small houses for patients were built in the Mammoth Cave. Of course, the idea was a failure and did not bear any fruit. 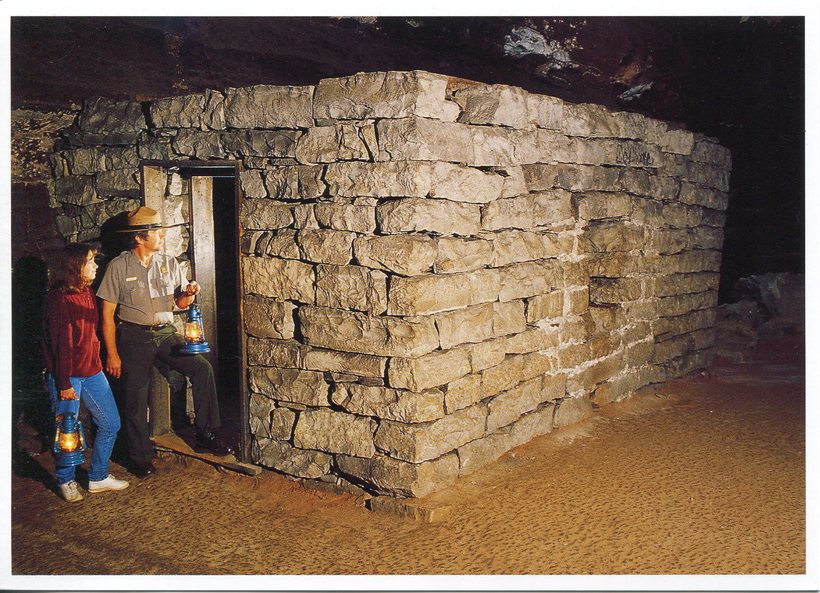 However, there are still a couple of such huts in the cave today. During this time the Mammoth Cave was interesting for tourists: at first it was studied by local people, and then, when the roads were built, travelers from other states began to come here, and then – from other countries. In the 1940s, the territory was taken under protection, a national park “Mammoth Cave” was created, and the research was continued. During expeditions, speleologists discovered that it was not just one cave, but a whole system: many caves in the vicinity, which seemed to have nothing to do with Mammoth Cave, were connected to it. 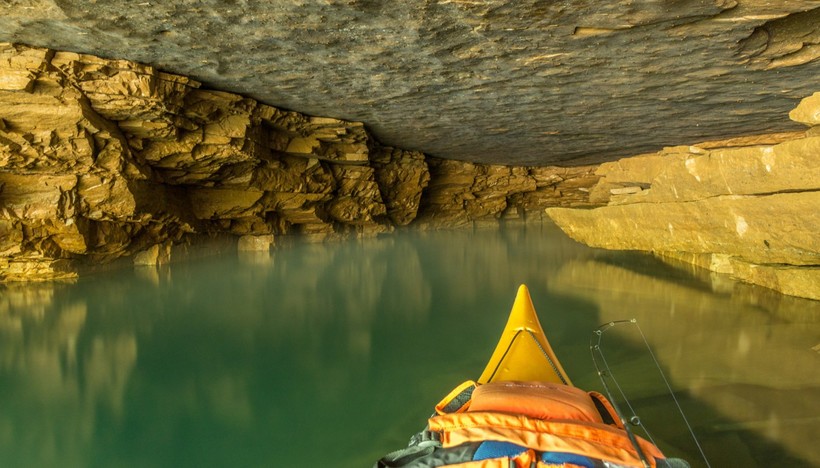 Every year, about 500 thousand people visit Mamontova Cave. Of course, only a tiny part of Mamontovaya cave is accessible to tourists, which is no more than 20 kilometers long. But even this allows you to feel its scale: guided tours include visits to underground rivers and lakes, waterfalls and some secret corridors and galleries.

Thus, there are huge halls with high ceilings and narrow corridors, where one wall from another is at arm’s length. What’s more, some tours are conducted using paraffin lamps, so you can feel like a pioneer and some even offer to hold ancient torches that the locals used to light their way thousands of years ago.

The longest cave in the world – the legend of Mammoth Cave 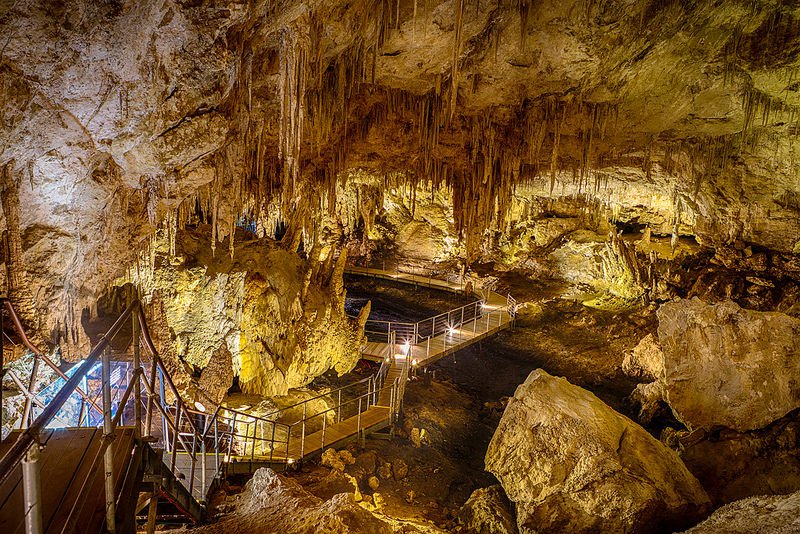 In his guidebook, the first explorer of the legendary cave, black slave Stephen Bishop, describes the place as “grand, gloomy and strange.” And among the Native Americans of western America from time immemorial there was a legend about the once living here huge lizard-men, gnawing their way into the bowels of the dungeon.

Located in central Kentucky under the Flint Ranges, Mammoth Cave is the longest cave in the world. Its explored portion is 651,784 meters long and 124 meters deep below the ocean surface. The cave is part of Mammoth Cave National Park and one of the major attractions in the United States.

Information about the incredible size of Mammoth Cave is updated with more and more discoveries: in the middle of last century it was found that its endless mazes connect several neighboring caves – Salt, Crystal and Neizvestnaya. When a passage to Fisher Ridge Cave was discovered in 1972, scientists concluded that Mammoth Cave was not one, not two, but a cave system! No wonder that no one has ever been able to go through all its numerous passages and ramifications.

READ
Summer care for your skin 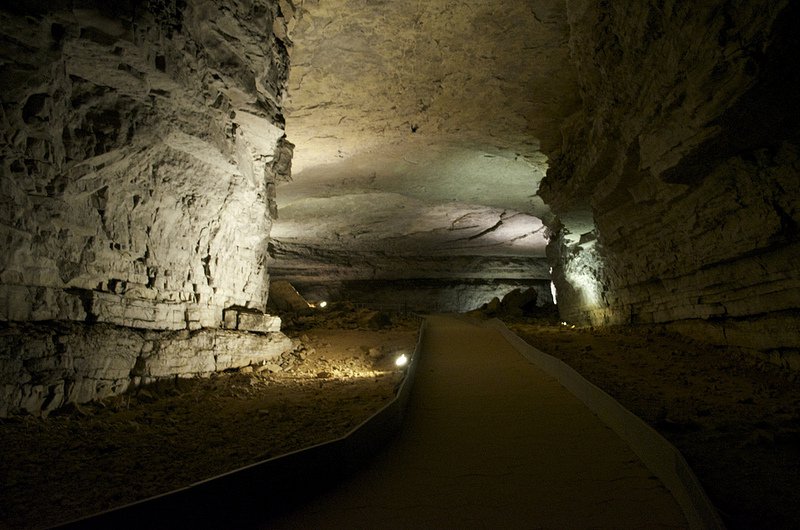 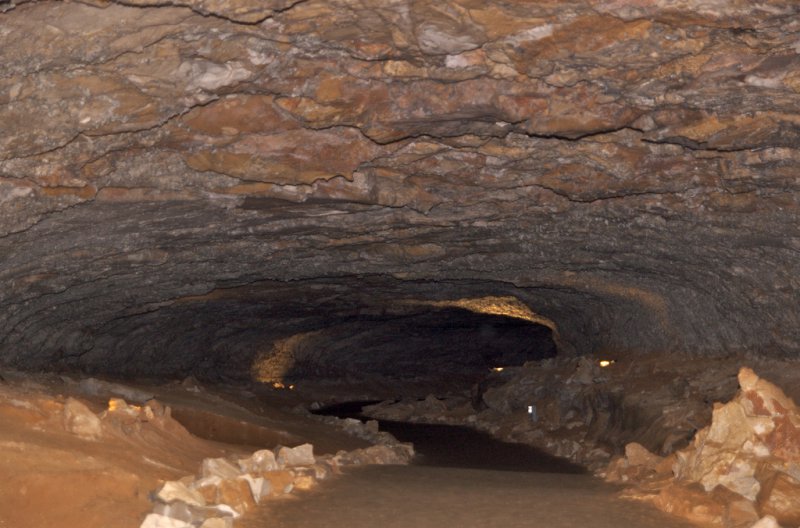 By the way, according to researchers, the name Mammoth Cave has nothing to do with prehistoric animals, but rather with an alternative translation of the English adjective “mammoth” (2nd meaning: “huge”). But who knows what secrets are still hidden in the unexplored corridors of its dungeons, which according to scientists are up to 10 million years old? Perhaps somewhere in one of these ancient grottoes are hidden pirate treasures? Or maybe in the depths of these bowels are still roaming free the giant ancestors of modern animals, or even our own ancestors? 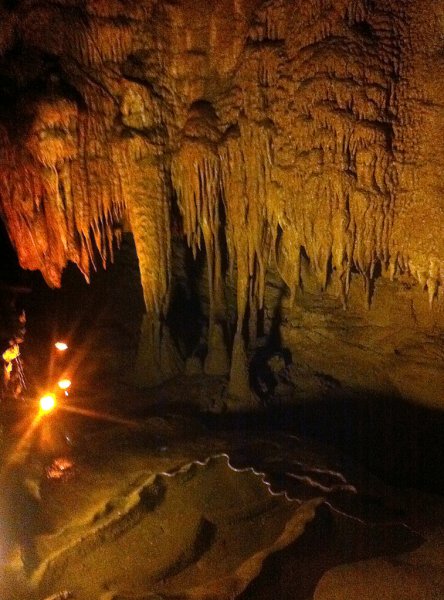 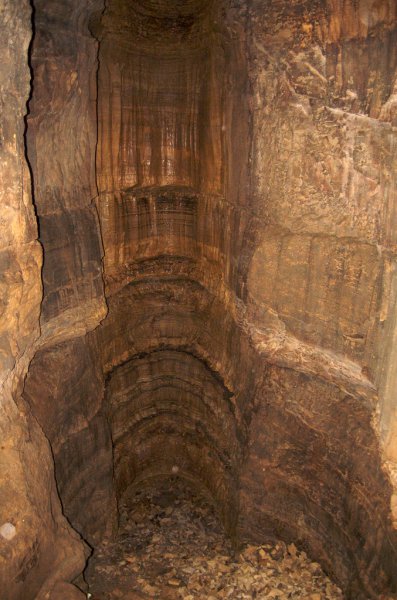 See with your own eyes

Every year about half a million people try to unravel at least part of the mysteries of the Mammoth Cave. You can reach it by car, driving from the north on highways 31E, 31W, or I-65. Following these roads, you will find yourself in one of the most beautiful places in the USA – the reserve of Kentucky National Park – Mammoth Cave (by the way, in 1981 the park together with the cave system located on its territory was included in the list of UNESCO World Heritage Sites).

On the territory of the Mammoth Cave Park, a total area of 214 km, the most comfortable conditions for tourists of all ages have been created. There are also specially equipped paths for wheelchairs. Those who wish can travel on the Green and Nolin rivers by ferry, boat or canoe. These rivers run through the whole reserve and are about 30 km long. 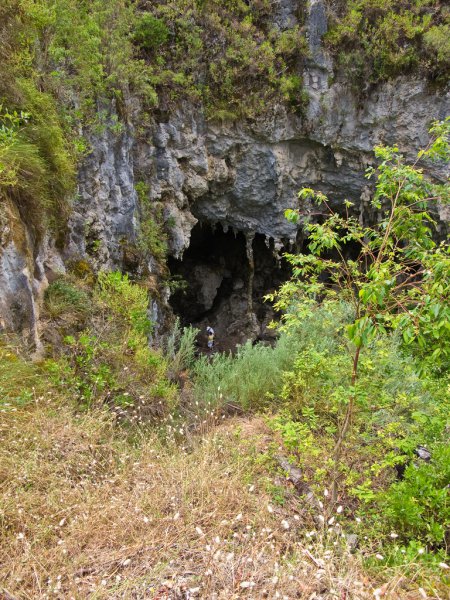 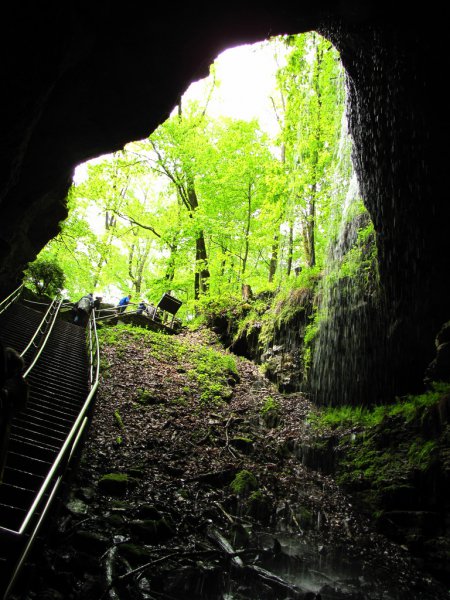 Numerous outdoor activities are available, including camping and fishing. The park does not restrict the activities of hikers, warning only about the possibility of damage to U.S. wildlife. For example, you can’t bring your own firewood into the national park, as it can harbor harmful insects that can cause irreparable damage to the park’s centuries-old trees. Or, for example, visitors are asked to go through the “bicows”, as the bats have a “white nose” epidemic this season, which is not dangerous to humans, but fatal to the winged inhabitants of the reserve.

And yet the real wonders meet the tourist only after he crosses the threshold of the system of multi-storey underground mazes called Mammoth Cave. Sparkling placers of crystals, bizarre piles of stones, giant halls and narrow passages, suddenly breaking into the abyss… These and many other natural phenomena are encountered here literally at every step. 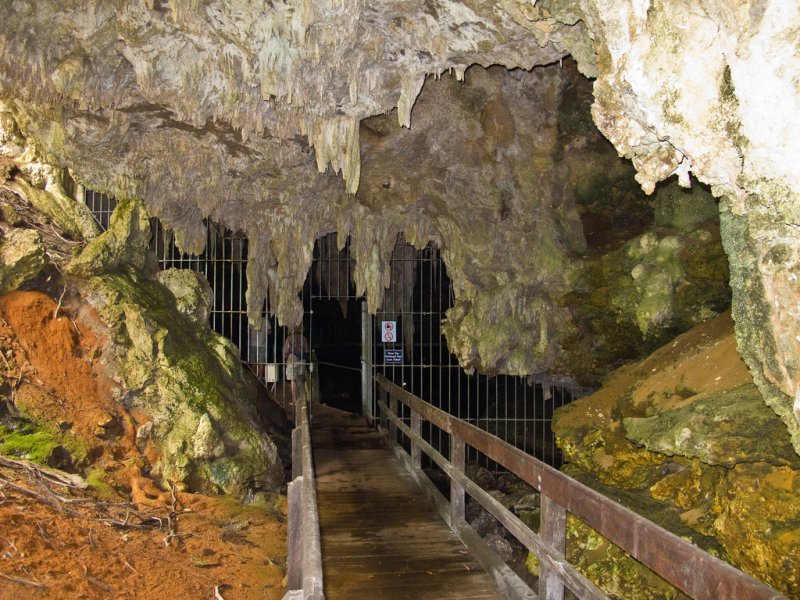 Excursions to the underground labyrinths of the Mammoth Cave last from one to six hours. Some tours are led by torches and kerosene lamps, which allows you to feel the atmosphere of U.S. pioneers. Visitors can choose from several types of tours with intriguing names: “Journey to Frozen Niagara” or “Mysteries of Styx Cave.” The average cost of a tour ranges from $5 to $15, but there are more expensive tours that include an extensive sightseeing program, such as Grand Avenue or Wild Cave Tour ($25 to $45).

Mammoth Cave is rich in sights, it is impossible to count them all, but some still deserve special attention. Everyone who has been to this fabulous labyrinth, first of all, recalls such phenomenon as “Frozen Niagara”. The cascades of stalactites and stalagmites, growing toward each other, form an endless cascading stream of frozen splendor.

In this vaulted grotto, specially selected music plays: classical music played by Native American flutes. And at the same hour, in the imagination of visitors, the giant jets of waterfall immediately turn into hundreds of wind instruments. By the way, this underground kingdom also has its own concert hall, where periodic violin concerts are held.

Every place of interest has a cherished wall, where any self-respecting tourist simply must leave his mark on history in the form of a heart, an inscription, or an autograph. The Mamontova Cave has not ignored this tradition and has allocated to its visitors a whole memorial hall, which is called as such: “the hall of records”. By the way, one of the first records on the walls dates back to 1890! 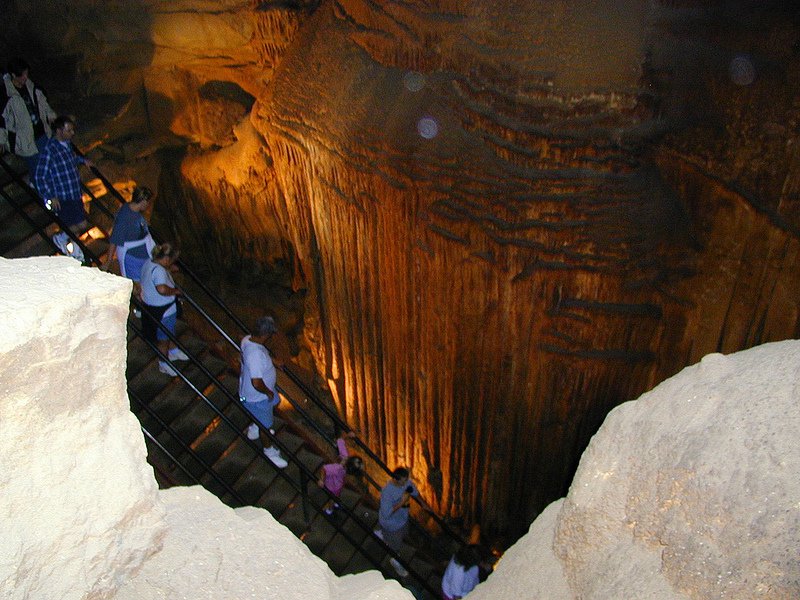 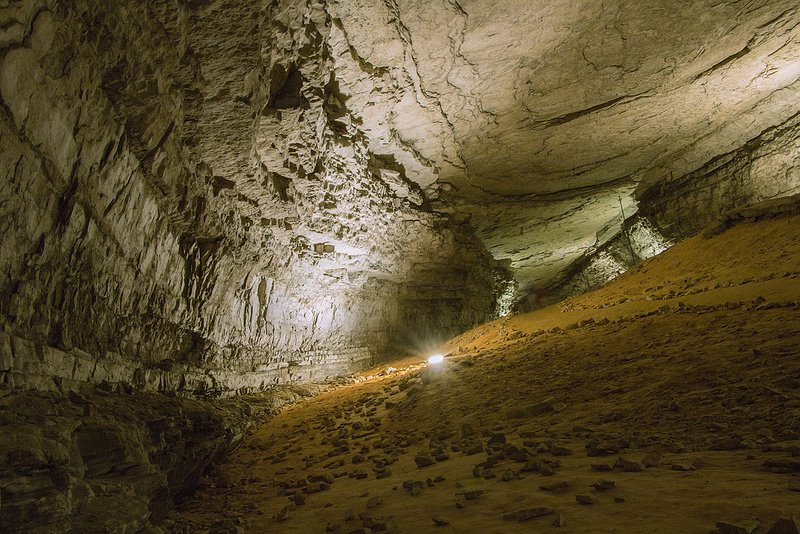 The Mamontova Cave is a world of its own: bizarre and unusual. The world with its history, climate (year-round temperature stays within 12 degrees above zero), nature, flora and fauna. In the depths of its bowels silently splashing rivers and lakes, in the waters of which live strange eyeless fish, transparent crabs and bizarre albino shrimp. By the way, one of these underground rivers has become especially famous: in response to any spoken word or stroke of an oar, it produces a whole symphony of sounds and echoes. Because of this peculiarity of its waters, the river was called the “Echo”. 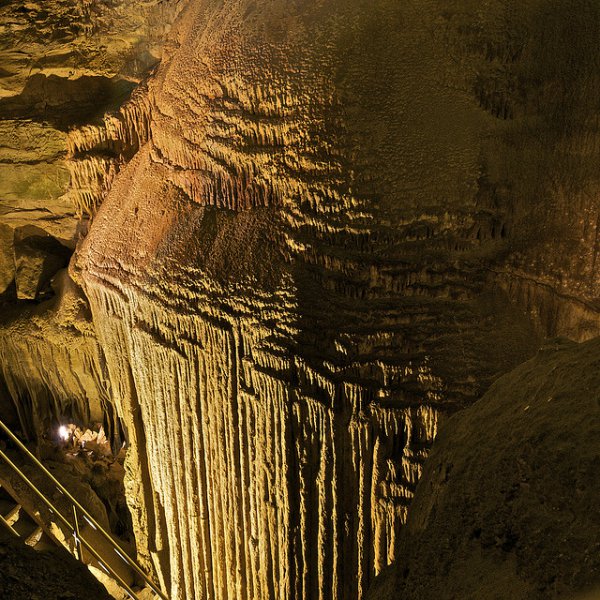 Mammoth Cave was formed about 10 million years ago. Its dungeons were well known to the local Indian tribes: in fact, the walls of stone vaults saved them from predators and bad weather, and various grottos and hollows served for burial rites. 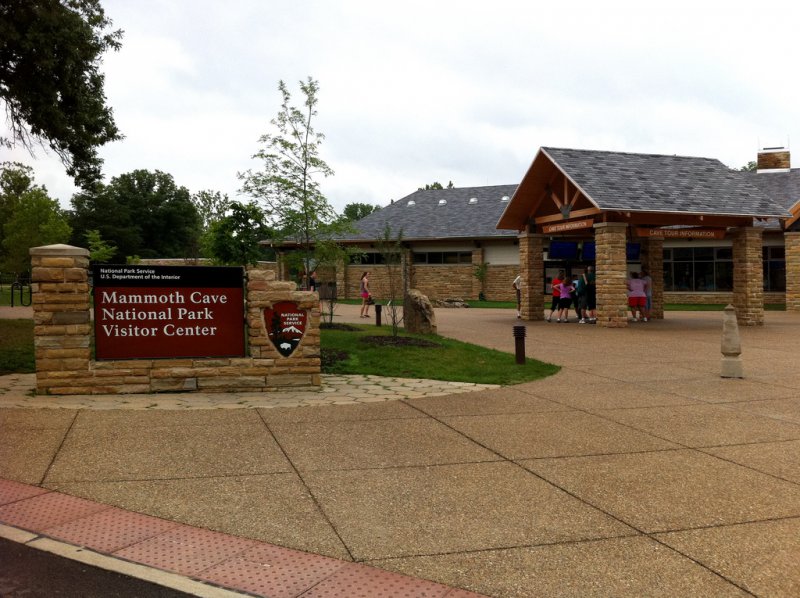 The modern history of the Mammoth Cave dates back to 1797 when it was discovered by American pioneers. Until 1814 the cave was used purely for industrial purposes, and for a while there was even a tuberculosis sanatorium. 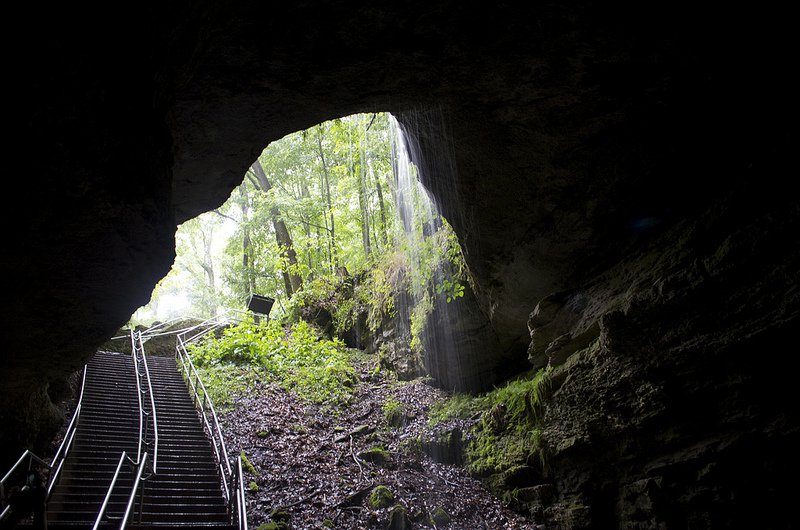 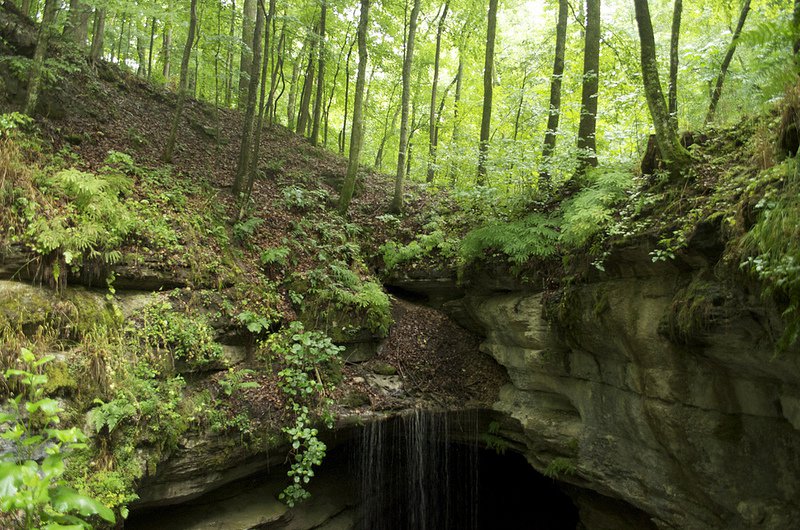 However, after the book “The Visitor’s Walks of Mammoth Cave” by Alexander Bullitt was published in 1845 and steamship and railroad communication appeared in the area, the cave began to gain popularity. Finally, in the middle of the last century, the government and people who simply cared about nature managed to buy these lands from private owners. Thus, in 1941, a new national park – Mammoth Cave appeared on the map of the United States.