One of these, the Puerto Princesa Underground River National Museum-Reserve, is listed as a UNESCO World Heritage Site.

Where is the famous Puerto Princesa River 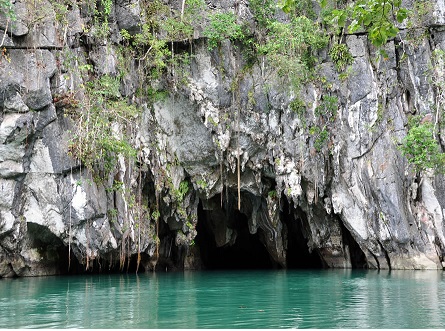 The underground Puerto Princesa River is located on the island of Palawan. Together with several nearby islets, it is the largest province of the Philippines.

A long narrow stretch of land between two seas is divided in half by a mountain range. The proximity of a tectonic fault has provided a variety of landscapes. In an area of 12,000 square kilometers you can see:

The famous underground river is located 50 km north of the regional capital. It as well as the city is named Puerto Princesa, named after the founder of the city – the Spanish princess Eulalia de Bourbon.

To protect rare plant and animal species from curious tourists, the area around the underground river was declared a protected zone.

The park is located on the slopes of the Saint-Paul Ridge. It is surrounded by natural boundaries. The Bay of Saint Paul and the South China Sea, into which the Puerto Princesa flows, washes from the west. To the east flows the Babuyang River.

Puerto Princesa River on a map

The Puerto Princesa Underground River is not the only one of its kind, but it is called the natural wonder of the world and the most visited attraction in the Philippines.

It is the longest of its kind in the world with a total length of 24 km. Under the strata of the earth, the river intricately meanders through a section of 8 kilometers long. Puerto Princesa is deep enough to walk freely by boat. The width in some places reaches 140 meters.

READ
The sights of Turkey.

Palawan Island is riddled with caves because it consists of karst rocks. Here the water washed out spacious beautiful halls with stalactites, stalagmites of original shapes, covered with multicolored divisions. The colors depend on the chemical composition.

Under the ceilings up to 60 meters high live spiders, bats, and salanganes, small birds whose nests have become a famous Asian delicacy.

Scientists are still studying the plants of the protected area. Already 800 new species have been discovered. Of these, about three hundred are giant trees: dao, amugis, apitong, dita with fragrant inflorescences and others. 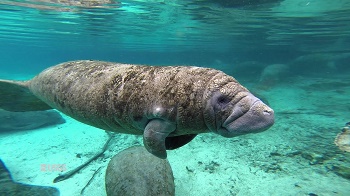 At the mouth, the Puerto Princesa River has created a unique ecosystem by mixing freshwater and seawater. More than two thousand varieties of fish, 20 species of dolphins, whales, Hawksbill sea turtle, dugong and bissa can be seen in this cocktail.

The rarest animal living here is the sea cow.

The park is home to 165 species of birds, including the rhinoceros bird, jungle hen, white-breasted gull, white-breasted sea eagle, blue-breasted parrot, and others. Fifteen of them are endemics.

The lower floor is occupied by snakes, lizards, and varanas, 19 species of reptiles in all. Such as the Philippine forest frog, Philippine barbourula is found nowhere else in the world.

Long-tailed macaques feed on what the sea leaves on the shore after low tide.

Noisy packs of monkeys always gather around people. They can be aggressive, which constantly warn tourists.

Rest and trip to the river

History has managed in the Philippines to combine the incompatible. Island culture absorbed the traditions of the ancient tribes, Asian visitors, Spanish and American colonizers. Now this wealth is actively used to attract tourists. Gorgeous beaches, hot sun, gentle sea.

Coral reefs, countless fish. Rich history, including the remains of the first Homo sapiens, who lived 22 million years ago, and discoveries of an earlier period. And the incredibly beautiful nature – just breathtaking.

The best time to visit Palawan is from January to May when the weather is dry and hot.

To get to the reserve of Puerto Princesa is difficult. The number of visitors is limited to 1200 people a day. The working day lasts from 8 a.m. to half past four only if the weather is good.

It is better to book and pay for the tour in advance. You can do this remotely through the Internet. Without a ticket, or rather without a special permission, a permit, you can not get into the park.

First, a two-hour drive from the capital to the village of Sabang, from where the water journey begins. On bangkas – boats similar to watermelons (for stability they have side rails attached), tourists are ferried directly to the territory of the park. There, after waiting in line, they are transferred to small canoes.

Extremes get to the river on foot 4 km through the jungle.

Guests are allowed to see only a mile and a half of the waterway. There are natural holes in the rocks through which fresh air enters. It is not safe to swim further, there is little oxygen.

The boundaries of the caves are lost in the dark – there is no lighting, only the guide’s flashlight.

The event lasts 8 – 10 hours, of which the tour itself takes less than an hour. To make sure the adventure is unforgettable, it is possible to buy a certificate.

For those who want to stay longer, there are hotels in Sabang.

The journey fills life with emotions, the head with knowledge, and the soul with dreams. The impressions of a trip to the Puerto Princesa Underground River will forever remain in your memory.

The reserve is located 50 km from the Philippine city of the same name. The flora and fauna of the national park are unique. On its territory there are many karst and limestone mountains. It is home to a rare mammal – a sea cow, unusual bearded pigs, varanas, animals (binturongs), which look like a cat and a bear at the same time, they are also called “cat-bear”. 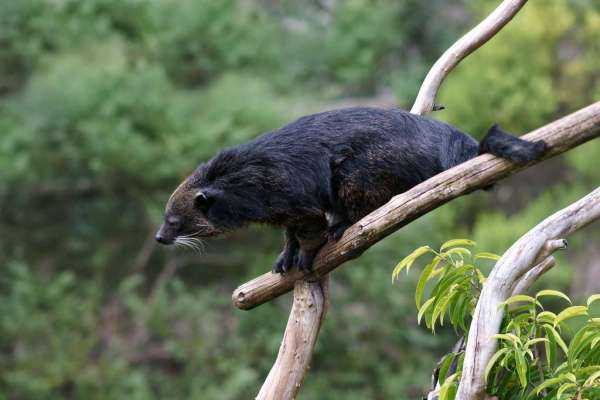 More than 165 species of birds, out of 252 species inhabiting the island of Palawan, lives in the park. Due to the diversity of fauna and flora, a rare ecosystem, the park was included in the list of World Natural Heritage of UNESCO in 1999. In addition, there is a large area of coral reefs, amazingly beautiful beaches. 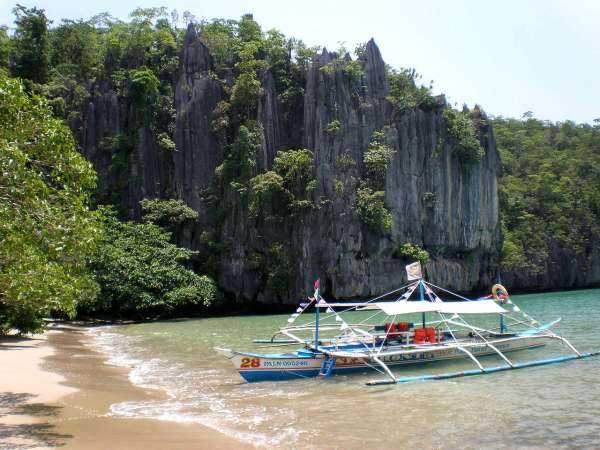 The underground beauty of Puerto Princesa 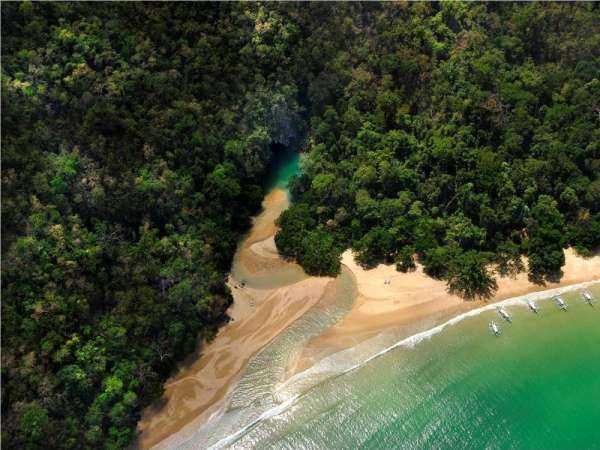 THE PASSAGE TO THE UNDERGROUND RIVER

This amazing river is among the 7 new wonders of the world. The river, 8 km long, is navigable. But, due to the lack of oxygen in the depths of the cave, it is allowed to visit no more than 1.5 km. The cave through which the river runs is one of the largest in the world.

READ
Where to drink and eat in Buenos Aires, Argentina - peculiarities of the national cuisine 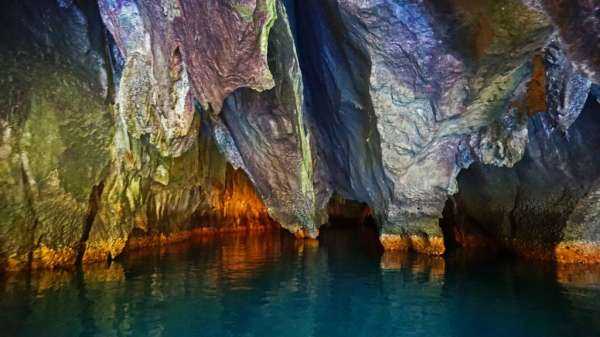 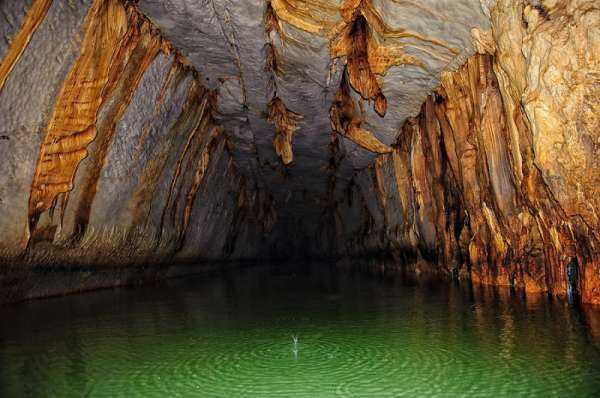 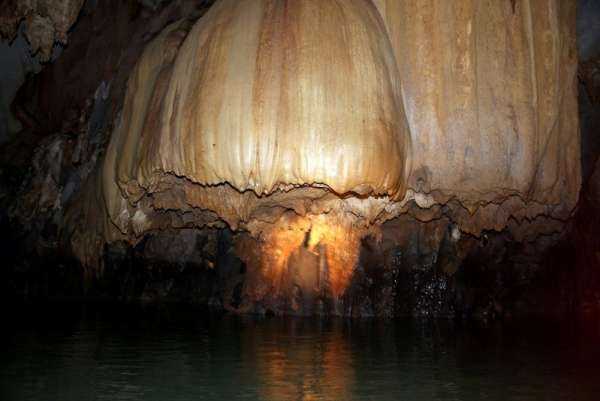 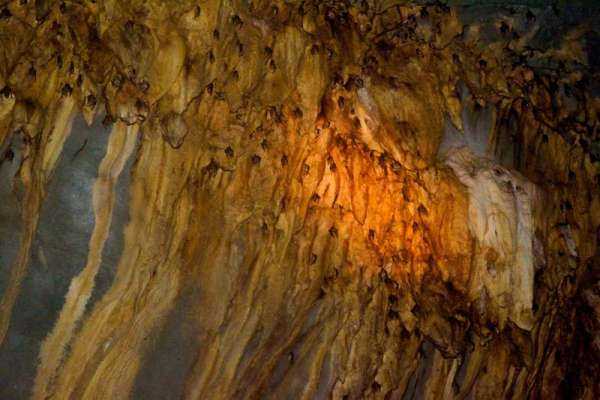 The width in some places is more than 140 meters, the height of the cave vault is about 80 meters. In some places, there are “windows” in the cave vault to the surface, through which sunlight and air penetrate. The river channel meanders through the cave with clusters of stalagmites and stalactites, flowing through several giant underground halls. The caves are full of bats. They hang from the ceiling right above the heads of tourists. It is said that there are more than 40 thousand of them. 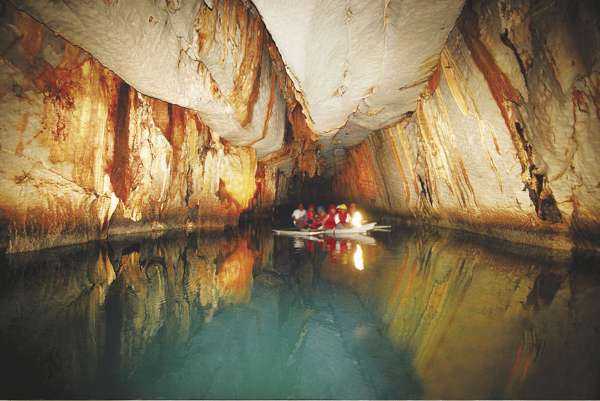 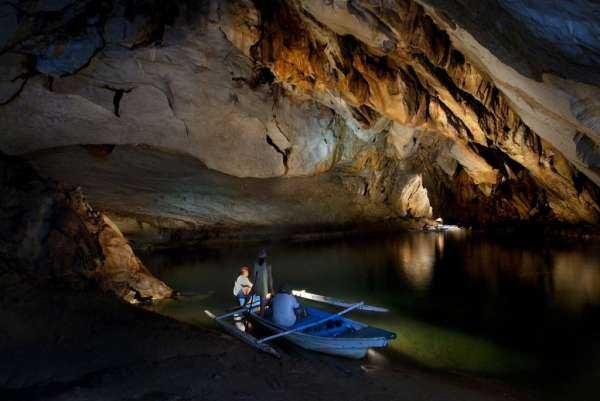 Those wishing, with the permission of the guide, can swim in the underground river in one of the grottos, the depth of which is not more than one meter. For a better overview of the cave should take a powerful flashlight.

There is no electricity here. You can view everything with the guide’s powerful spotlight. At the end of its path, the river flows into the South China Sea. The best time to visit is from January to May. During this time, the weather is sunny, the sea is quiet and calm.

How to get to Puerto Princesa 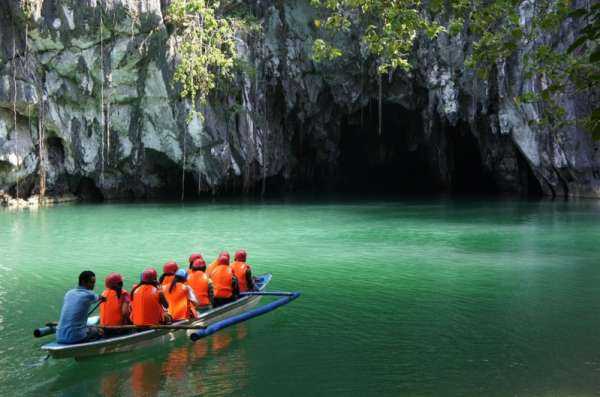 To see Puerto Princesa, it is better to buy a tour in the city. It will save you time. Since the river belongs to the heritage of UNESCO, the number of tourists to visit it is limited. To visit it, you must buy a special pass – a permit (price 250-300 pesos). If you plan to visit on your own, the permit will take more than a day.

The cost of the tour is 1500 pesos, includes a ready-made pass, a ride to the reserve and back, rafting with a guide. The tour itself lasts 7 hours, daily from 8:30 to 15:30. You buy a tour and get to the underground vent of the river by boat. There is usually a small queue of boats before you enter the cave, but you do not have to wait more than 30 minutes. During this time, you can admire the varans and feed them. They are not afraid of people. You can stay at the rest either in bungalows, with a minimum set of services, or in luxury apartments. No mid-range hotels in Palawan.

READ
Armenia: a country that saw and survived the Deluge 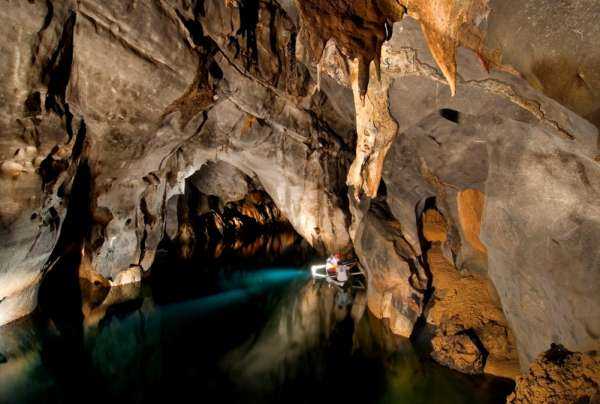 Underground River is the most visited attraction of the Philippines. Each year, thousands of tourists come here.