Turkmenistan – Asian country with the most difficult visa process

Turkmenistan, one of the most undiscovered and mysterious countries in Central Asia. Turkmenistan is widely known for its dictatorial government, which ruled the country until 2006. Therefore, it is not surprising to see golden statues of the dictator on every corner.

The country is famous for its handmade carpets, which are of great interest to the whole world. Akhalteke horses are no less valuable. This horse breed is considered the national animal of Turkmenistan and is even depicted in the center of the coat of arms. In the eyes of Europeans, Turkmenistan, an exotic country that combines the natural beauty, original traditions of the people and spirit. It is for these reasons it is worth a trip to Turkmenistan . 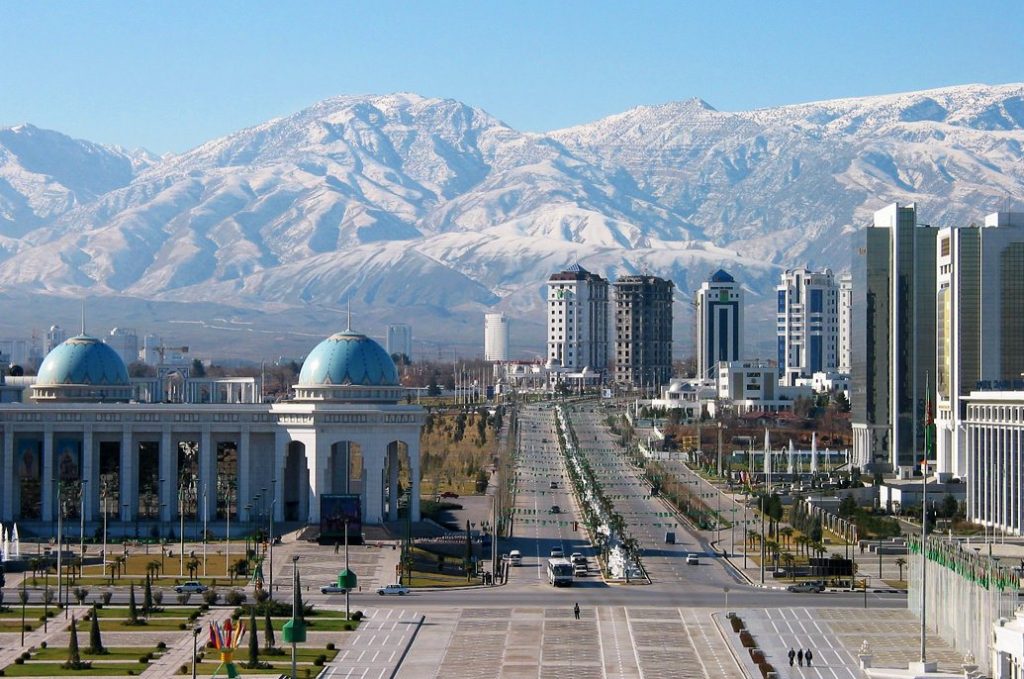 Turkmenistan is the Asian country with the most complicated visa process

Merv, one of the most popular oasis cities among tourists . In the 12th century it was one of the largest cities in the world. However, its origins date back to the 2nd millennium BC. Many experts believe that Merv, the place where the Hindu religion originated . At the same time, Hindus claim Merv as the center of the globe. The walls of Old Merv are on the UNESCO list, along with several ancient buildings. Merv, simply a magical place that no visitor of Turkmenistan should miss.

Ashgabat, a relatively young city, has become the capital of Turkmenistan, which was built as a center of power. The polished white marble buildings and golden statues make it felt on every corner. The city is a bit like a hollow and resembles a ghost town. The Turkmenbashi Presidential Palace with its typical golden dome and the Neutrality Arch monument, 75 meters high, are worth a visit. 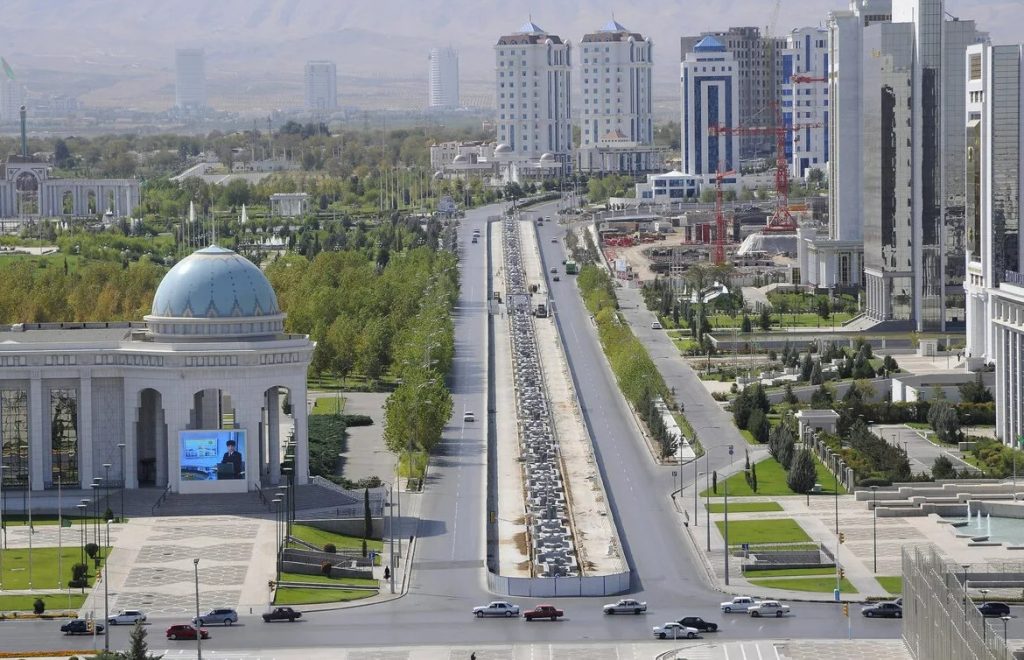 Lake Baharden is perhaps the most interesting natural monument of Turkmenistan. It is a hydrogen sulfide lake hidden in a cave at the foot of Kopet Dag Mountain. The water temperature in the pond reaches 36 ° C, which is not ideal for cooling. However, it is not recommended to stay in the water for more than 15-20 minutes and swim in the unlit parts of the cave. Because that is where numerous groups of bats rest . Because the pond contains hydrogen sulfide, the next body will probably smell like rotten eggs. 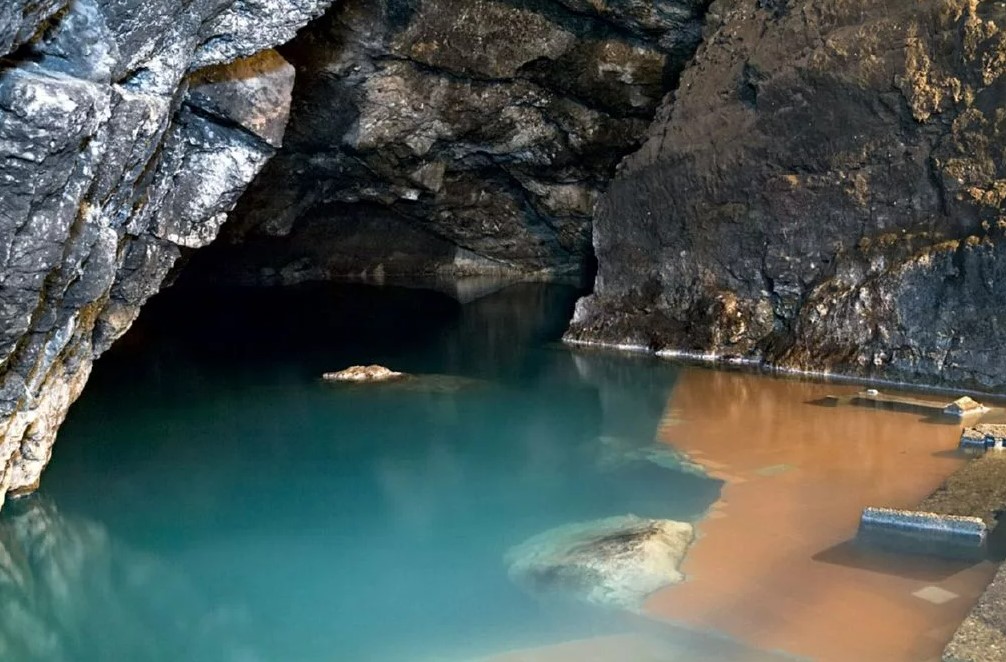 In the middle of the Karakum Desert, stands an imaginary gateway to hell. It is a permanently burning crater in the ground. Scientists explain this phenomenon by the leakage of natural gas that burns. The crater was created in 1971 by mistake by Soviet scientists when searching for natural gas deposits. Although the crater was supposed to be closed, but this was not done. Now it has been burning for over 45 years. Meanwhile the 100 meter wide and 20 meter deep depression has become a tourist attraction. The sight of a raging hole in the ground is breathtaking. Perhaps there is nothing like it anywhere else in the world. 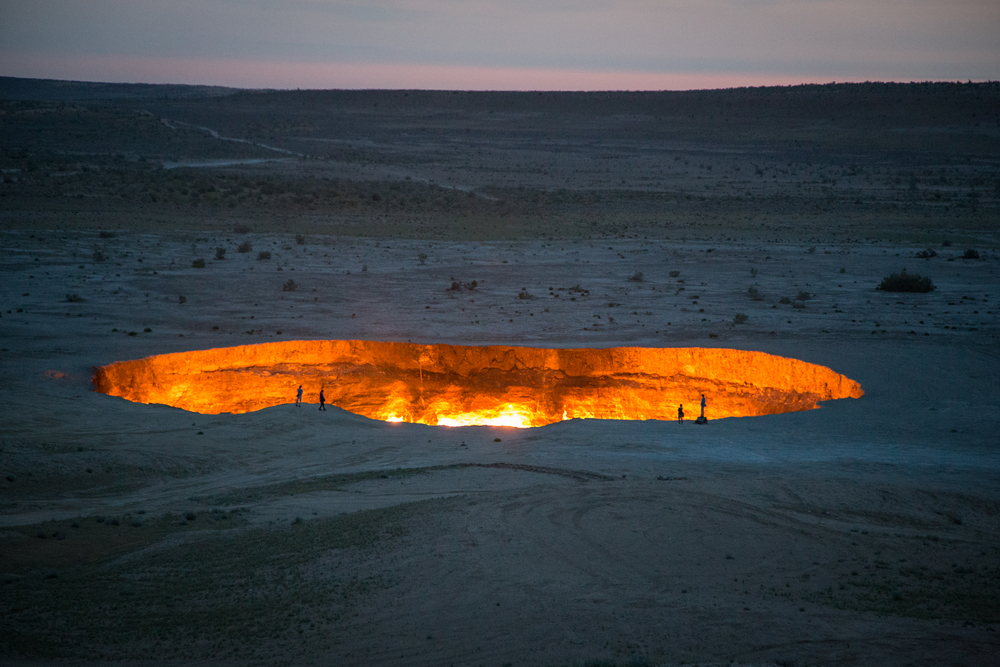 Nisa, a historic and ancient city whose old town has been inscribed on the UNESCO World Heritage List. The first mention of the city dates back to the VI century BC. Nisa stands on a large hill surrounded by walls 20 meters high and 5-10 meters wide. The 42 towers inside the complex are completely useless because Nisa is surrounded by Kopetdag Mountains. Bricks made of a mixture of clay and straw were used as building material, so the remains of buildings have a yellow hue. 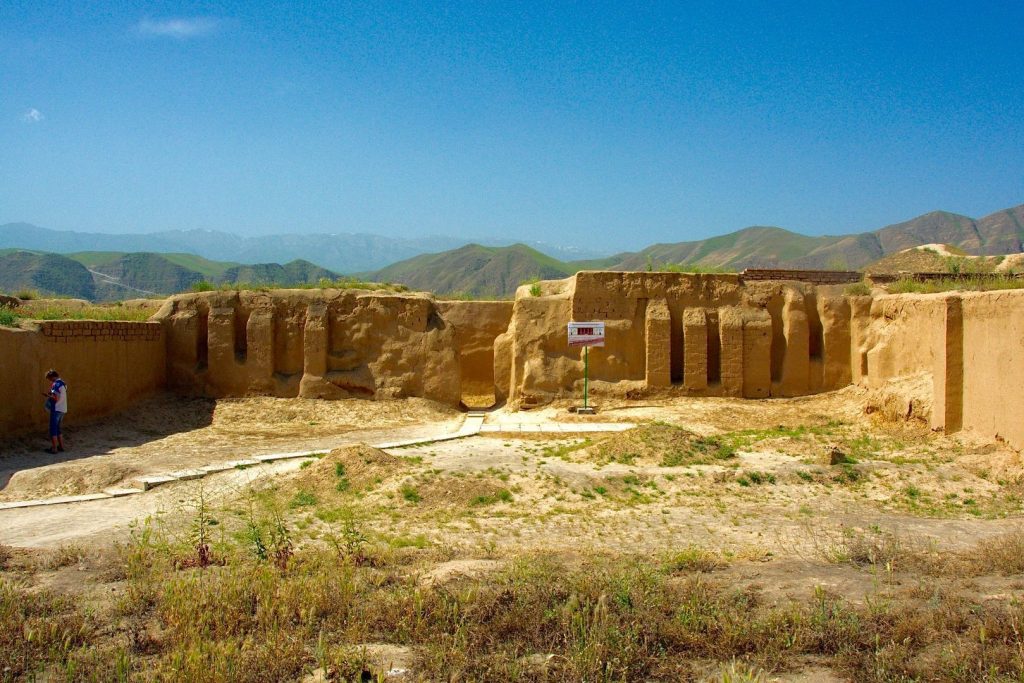 There is another UNESCO World Heritage Site in northwest Turkmenistan. In the old part of Kunya Urgench, there are many monuments from the 11th to 16th centuries. They include a mosque, the Caravanserai Gate, a mausoleum, a minaret 60 meters high and the remains of a fortress . The buildings are a testimony to the maturity of the architecture of the time and the skills of architects. 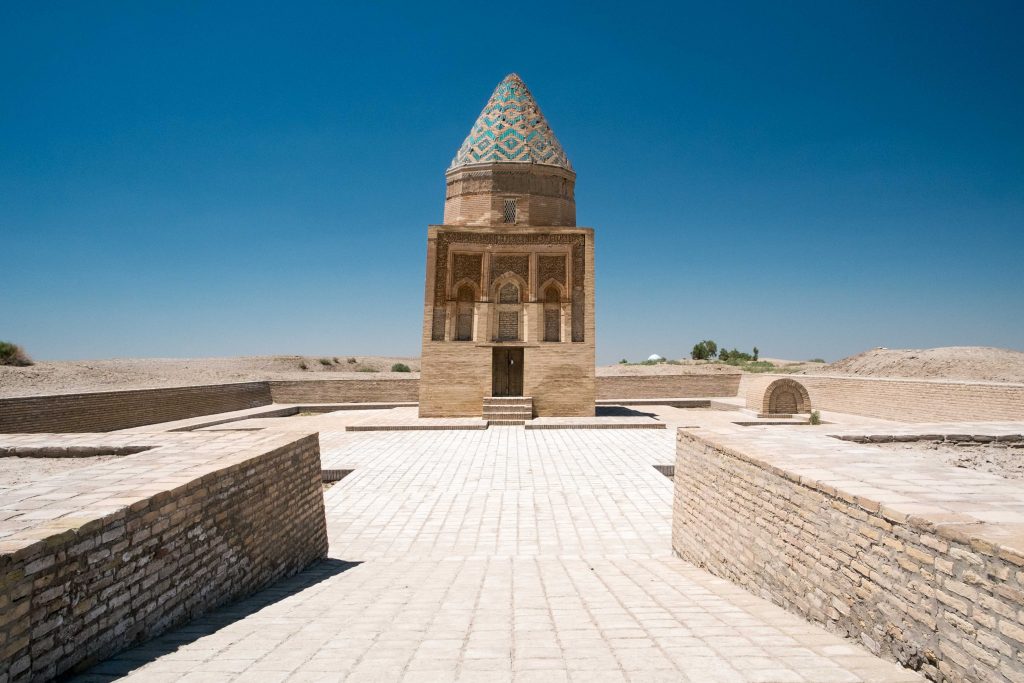 Incredible view opens up on the steep cliffs of the gorge, which shimmer in pink, red and yellow colors. The view of the colorful and at the same time desert landscape is breathtaking, so it is not surprising that Yangykala is one of the most remarkable natural attractions not only in Turkmenistan, but also in the whole of Central Asia. Since the gorge is isolated from the desert, there may be fewer traffic problems. However, the breathtaking view of the natural gorge will forever remain in your memory . 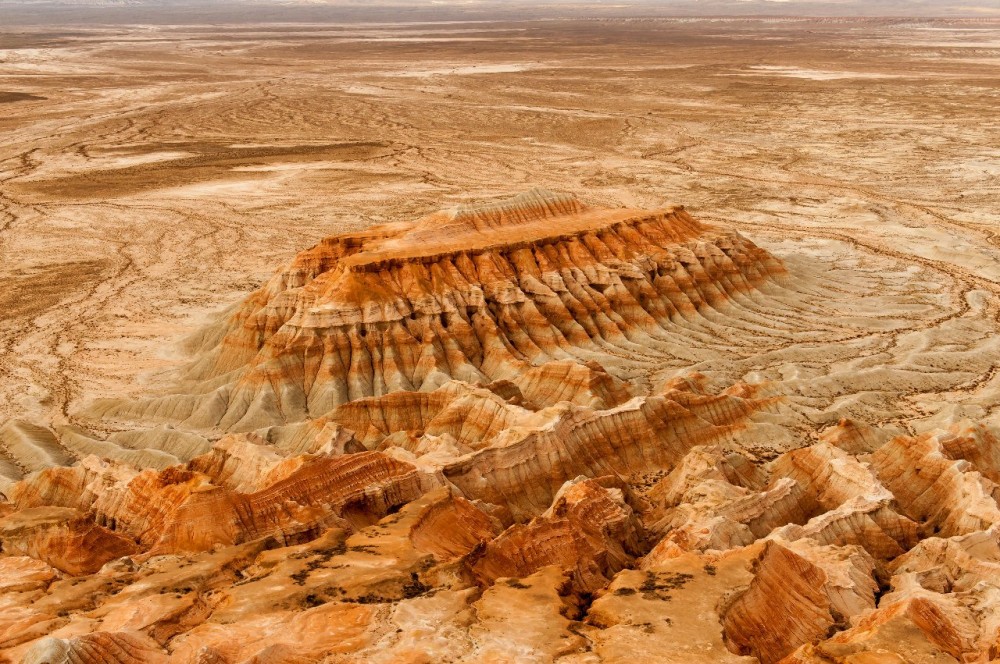 Turkmenistan is now opening its doors to more and more tourists who want to experience the Eastern architecture and natural beauty of the country. Although getting a visa is not easy from a bureaucratic point of view, anyone can find a way . Most often it is filling out a stack of paperwork or talking at the border. Turkmenistan has one of the most complicated visa systems in the world. So you can be sure that Turkmenistan is not a country of mass tourism.

9 countries that are difficult for travelers to get to

Travelling around the world can be difficult not only because of the pandemic. Some countries accept only organized groups, others are now dangerous situation, and some countries simply don’t give out visas. We’ve compiled a list of the countries that are the most difficult for travelers to get into, and we found out what attractions people go there for.

During a pandemic, states may impose additional restrictions. In addition, some countries in our selection should not be visited now because of military conflicts and other threats. Information about this is posted on the websites of embassies and other official sources. Before you travel, we recommend to study all the rules and assess the risks yourself.

What to go for: learn how life works in one of the most closed countries in the world, see modern-day pioneers, look at the mausoleums of Kim Il Sung and Kim Jong Il

How to get into the country: buy a tour from an agency accredited by the North Korean authorities, such as Korea Konsult. Travelers are not allowed to leave the hotel and move around without a guide

How to get to the country: buy a trip from an official tour operator. Authorities have estimated each day of travel at $ 200-250, depending on the season. The price includes lodging, meals, transfers, and tour guides

What to go for: to see ancient ruins, fortresses and medieval cities

How to get to the country: by plane, such as from Tunisia. But getting a Libyan tourist visa is almost impossible: there are frequent terrorist attacks and riots in the country

What to go for: to see the ruins of ancient civilizations, Islamic mausoleums and British colonial architecture

How to get to the country: by plane with a connection – there are no direct flights from Russia. Pakistan issues visas to tourists, including for mountain climbing. But foreigners are not allowed to move freely in the country: some areas are closed due to military action

What to go for: to explore the remains of ancient civilizations, oases and cave paintings, which are protected by Unesco

How to get to the country: to travel get an electronic visa. There are no direct flights from Russia yet. For violation of the rules of conduct in the country may be fined up to 3000 SAR. Some holy places, such as Mecca and Medina, are closed to non-Muslims

What to go for: to see the gas fire crater of Darwaza, the white stone capital Ashgabat and ancient mosques

How to get to the country: air links with Russia are closed, and the consulate of Turkmenistan practically does not issue visas. Travelers are housed in a strictly defined hotel and are not allowed anywhere without a guide

What to go for: to see the ruined cities, check out the local markets and tickle your nerves

How to get into the country: as part of a tour group with armed guards. In Somalia, since 1991, there is a civil war. Russian embassy advises travelers not to visit the country

What to go for: climb the active volcano Nyiragongo, visit Virunga or Okapi national parks

How to get to the country: there are no direct flights from Russia, and the embassy warns that it is dangerous for tourists to stay in the country. Travelers can be kidnapped, so they are not recommended to go anywhere without security

What to go for: to admire the paintings on the walls of ancient mosques, to see the blue lakes of Bande Amir and the Pamir mountain range

How to get to the country: air links with Russia are closed. In June, the Foreign Ministry asked Russians not to travel to Afghanistan. Travelling in the country is dangerous because of military conflicts, unrest and the threat of kidnapping

All the top news – in the Suitcase