The Düden Waterfall is considered the main attraction of the Turkish resort of Antalya. This natural site is rightly included in all sightseeing tours of the city. Interesting facts about this naturally occurring attraction on ResortTurkey. 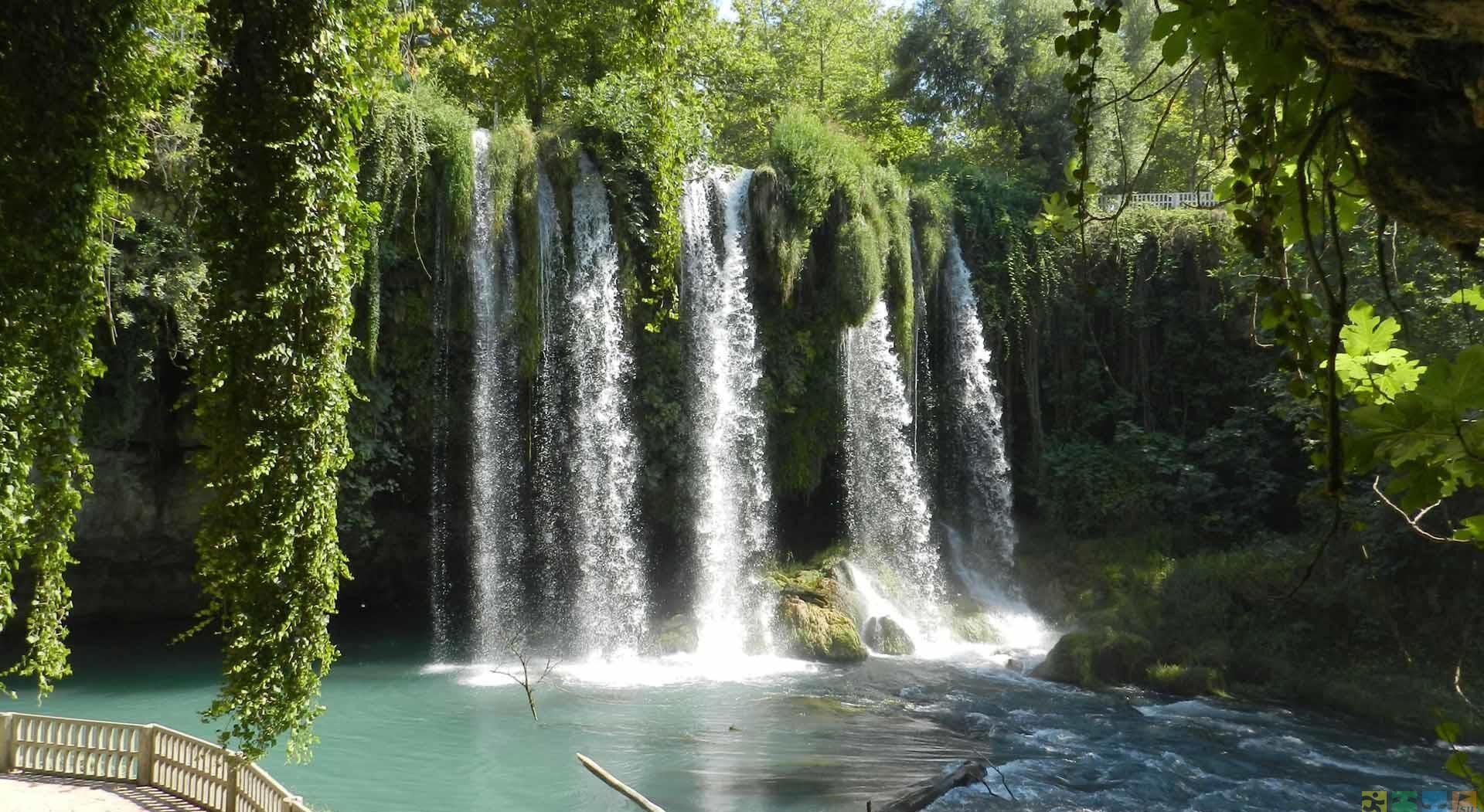 Thousands of locals and foreign tourists visit Düden Falls every day. Located within the city of Antalya (on the Düden River in Turkey), the cascade of natural water streams, which fall from a height with great speed.

The Turkish resort itself is located on the Mediterranean coast, belongs to the Turkish Riviera (southern Turkey, the administrative center of Antalya Province).

The cascade includes two waterfalls formed by the Düden River. It flows in the western part of Asia (the Anatolian Peninsula). The river, which crosses the country, divides the territory of the Republic of Turkey into two parts.

Waterfalls on the Düden River are recognized as one of the most beautiful places in Turkey.

Such processes are acceptable in the presence of the following fast soluble rocks in the soil: limestone, gypsum, rock salt, marble. 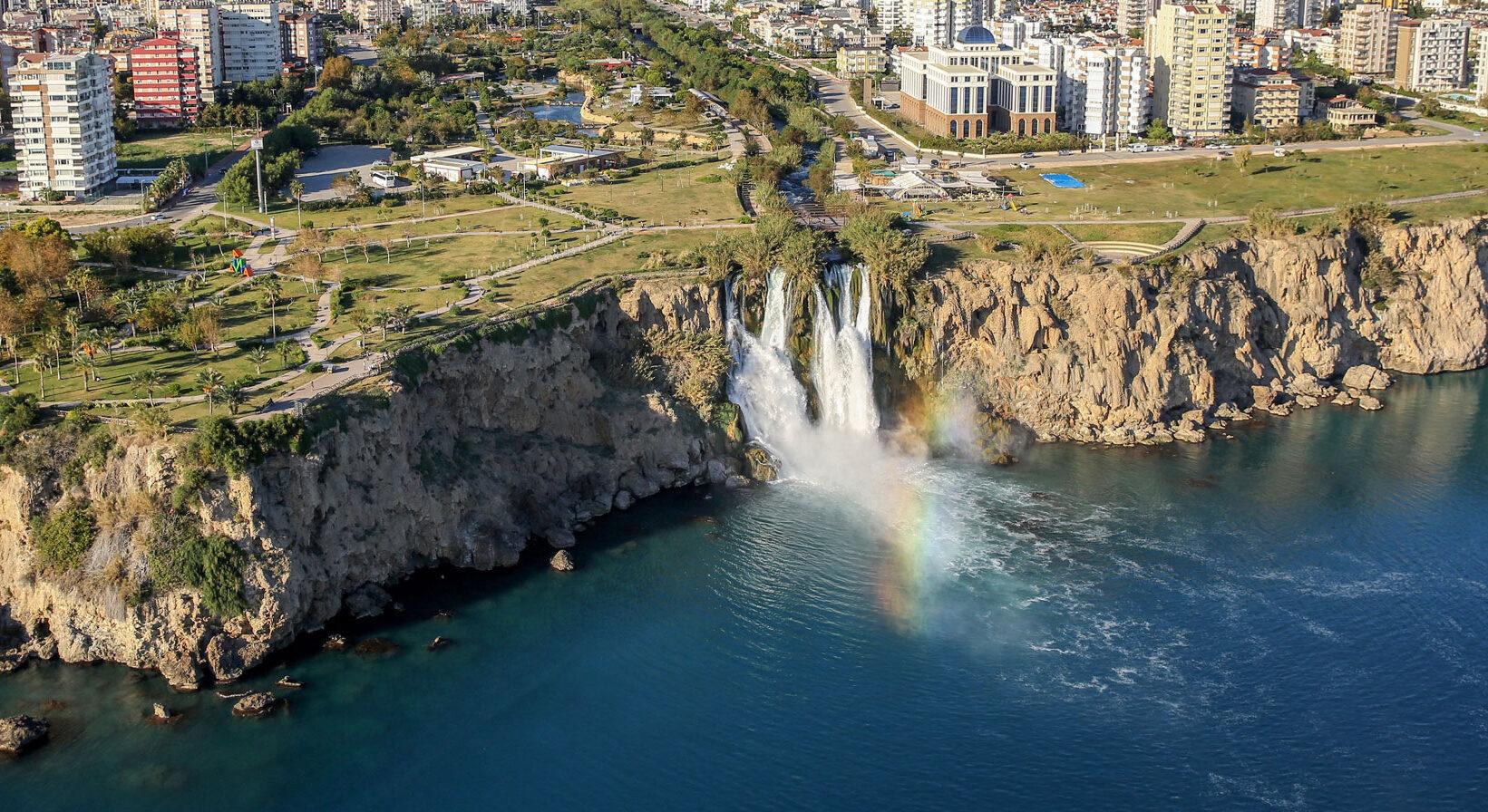 Local residents named it after Alexander the Great. This part of the Duden waterfall is located in the northeastern part of the resort.

Water is collected from two springs into one common stream. It moves through canals to the turbines of several hydroelectric power plants.

An artificial ditch was specially created, which runs through the resort from west to east.

The flow reaches an area called Düdenbashi. This is where the old bed of the Düden begins, where the Upper Waterfall is located.

After the construction of a hydroelectric power plant in the second half of the twentieth century, the direction of water flows was changed (channels were made for the hydroelectric power plant). Previously, the natural channel of the Turkish river moved about fourteen kilometers underground. This part of the reservoir began in the karst sinkhole Byikl, located near natural springs.

During floods, there is a significant flow rate (about 30 m3 / s). Previously, the river from under the layer of earth burst out in Varsaksky quarry. After flowing for some time along the surface of the earth, water streams again find themselves in karst layers, only after three kilometers they manage to get out.

About 10-13 kilometers downstream is the Lower Duden. Here, water streams fall into the sea from a height of 45 meters.

How to get to the waterfalls 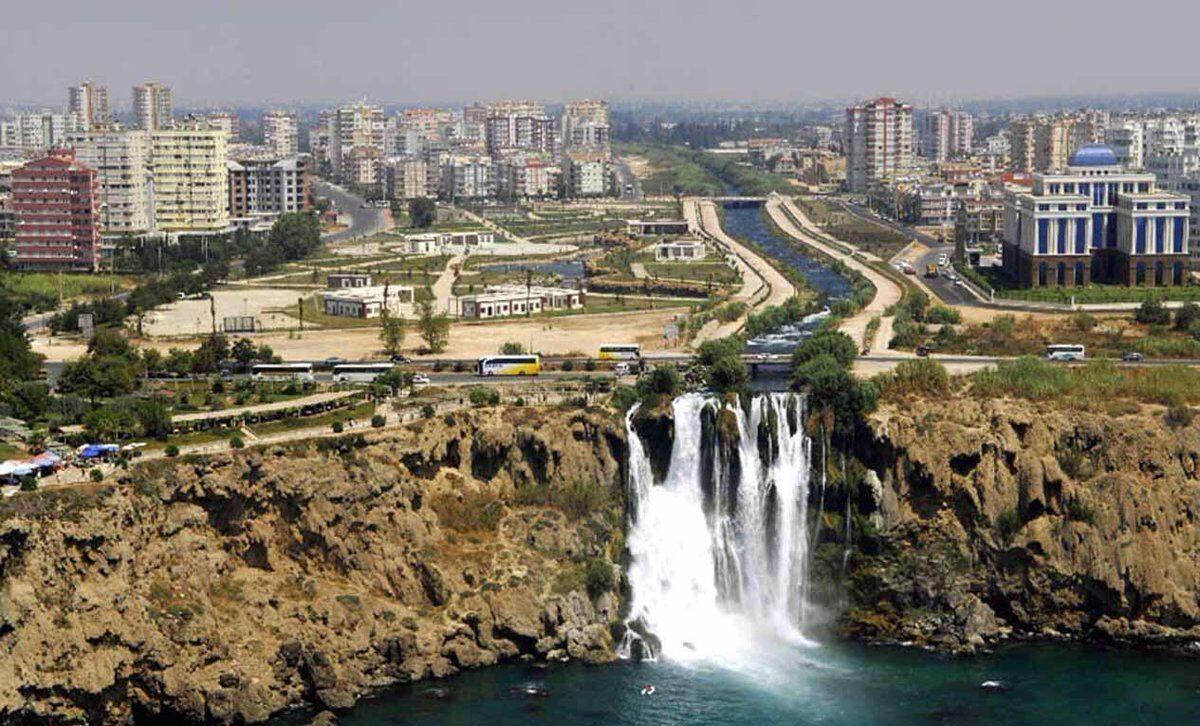 The Düden waterfall is located in Antalya, the central Mediterranean resort of Turkey. It includes two parts.

It is located ten kilometers from the central part of the city (Varsac quarter). You can get to this part of the Düden Falls by public transport (travel time is 30-60 minutes). The bus stop can be found opposite the central park. The city uses a special application on which you can track the number of flights, as well as the duration of the trip.

From the international airport Lara you can get to the national park by city transport, but you will have to make several transfers.

To get to the upper waterfall from Lara airport, we suggest using the following route:

There are several cab services in the resort town:

You can also get to Düden Waterfall by rented vehicles, or by your own car. There is a parking lot in front of the park where you can leave your car while you explore the natural landmark.

READ
The mysterious forest of Romania

The waterfall, which flows into the sea, is ten kilometers (to the east) from the central part of Antalya (Muratpasha district, Fener quarter). Not far from this picturesque natural site is the beach of Lara. You can get to the natural landmark as a part of a tour group or independently.

If you decide to go to the Lower Waterfall without a tour, we suggest the following options:

On the territory of Antalya made special yellow boxes with a button. It is with their help you can call a cab.

Public transport tickets can be purchased from the driver, or you can buy in special booths (Antalyakart). 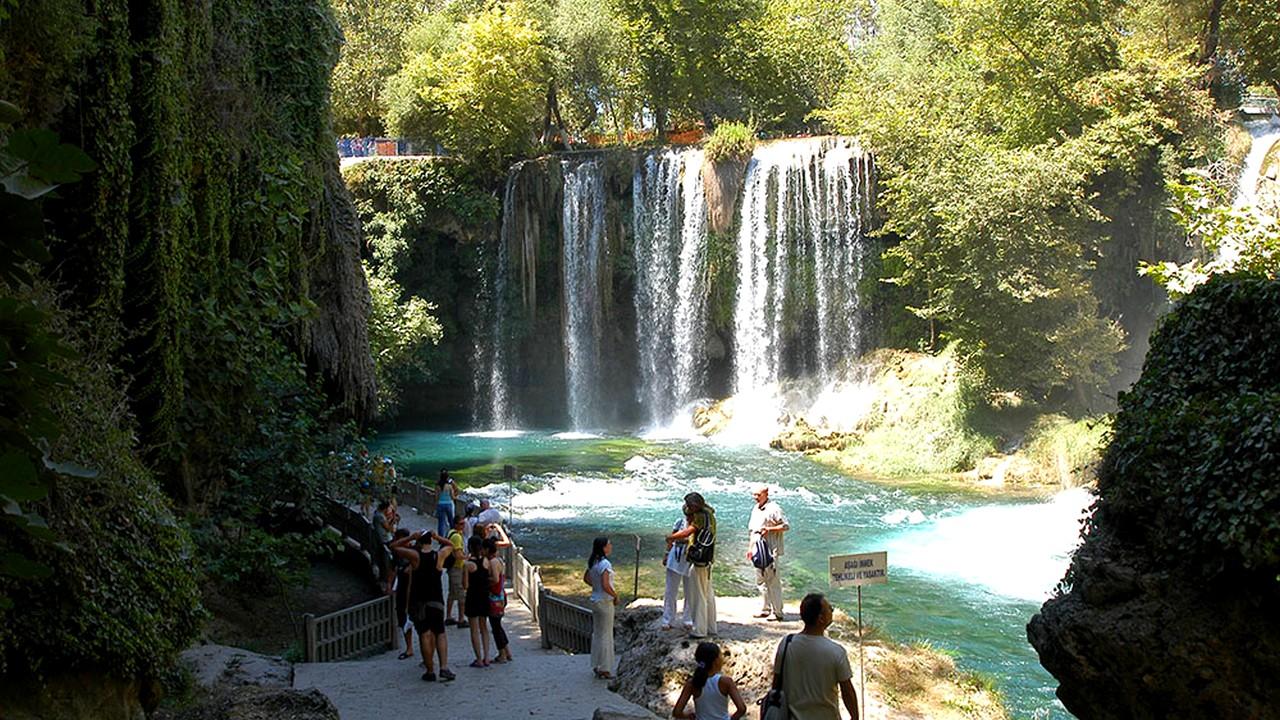 Duden waterfall arouses the interest of many tourists both in the summer months and in winter. To look at this natural landmark guests can take part in excursion programs (with an organized tour group). These programs include a tour of the Upper Duden, which is located in the National Park.

In order to see the waterfall, it is necessary to purchase an entrance ticket, the cost of which is:

Toddlers under the age of seven are allowed to visit this Turkish landmark for free.

No category of tourists is charged for seeing the natural landmark flowing into the sea.

In 2015, the Lower Düden was equipped with modern lighting. Nowadays, thanks to modern lighting in the evening and night hours, the waterfall takes on an amazing appearance. 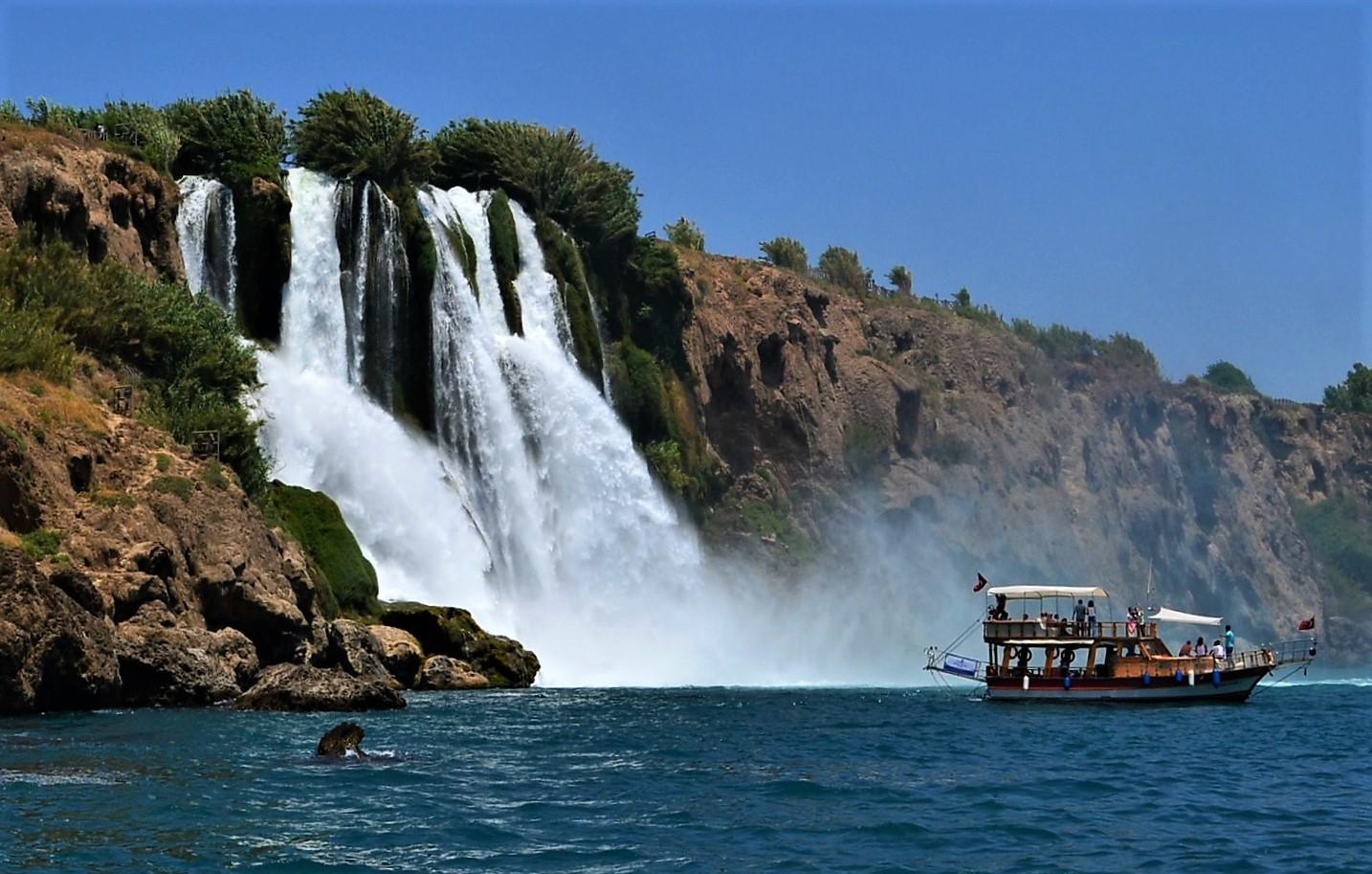 The beautiful landscape of the Lower Cascade is best viewed from the sea side. You can get there only as part of a tourist tour group. Registration and picking up for the tour is done at the pier of the Old Town.

You can go on your own (by public transport) or as part of an organized tour group.

Description of the territory 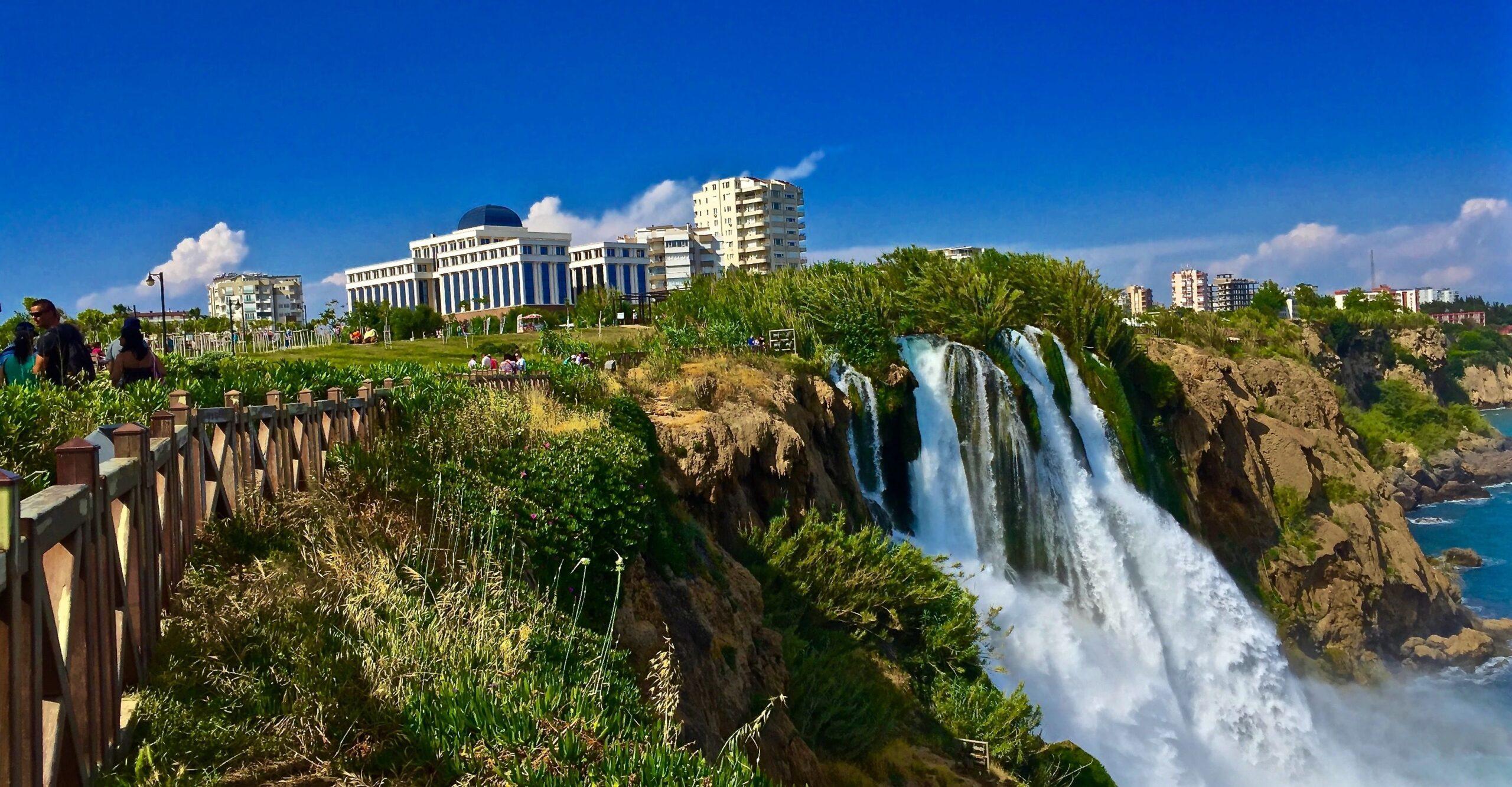 The National Park, through which you can get to the Lower Cascade, has a gate. It is next to them there is a ticket office, where tourists can buy tickets.

Such scenery gives guests the feeling of an ancient setting. Along the walkway, travelers reach the observation deck, from where the most beautiful picture opens up – the fall from a great height of streams of water.

The main characteristics of the waterfall:

To look at the waterfall from below, you have to go through an underground tunnel. Its entrance is designed as a cave next to the observation deck.

Experienced tourists advise to visit the sight to use shoes with a thick rubberized sole (so that it was not slippery), otherwise you can slip and get injured.

READ
The 11 best beaches on the Costa Blanca. Spain

As you move toward the end of the tunnel, tourists pass under a waterfall.

Near the exit of the tunnel, there is another attraction – ancient tombs dating back to the II-III centuries AD.

From the cave hikers can also get to the place where water streams fall (up). There is a special staircase for this.

The upper viewing platform is equipped with the hinged bridge, placed directly under the water streams. Next to the bridge is a vinar or sycamore, which passes under the waterfall. Don’t forget to be careful, as streams of water flow over the cliff walls onto tourists’ heads. 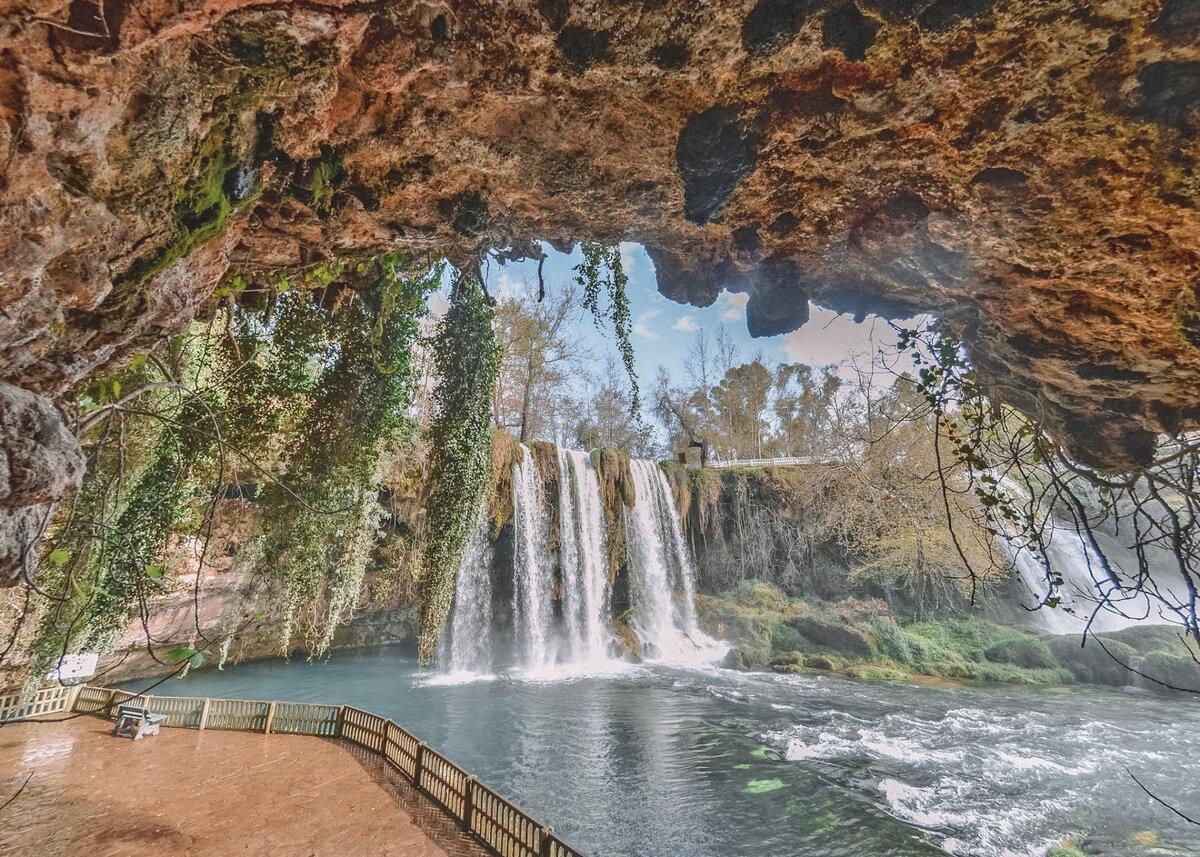 The waterfall is characterized by diverse nature, so it is ideal for numerous types of tourism.

Perfectly developed infrastructure facilitates long stay of visitors and tourists on the territory of the National Park (you can spend a whole day here).

There are also numerous sites suitable for photography.

In the lake, located at the foot of the waterfall, swimming is prohibited. There is a fine for violators.

At any time, guests can explore the part of the Duden where the river flows into the sea. As the streams of water fall from a height of 45 meters, guests of the National Park have an amazing picture in front of them. The fall rate of the water jet is the maximum among the river waters that flow into the sea.

The infrastructure in the park part of the Lower Düden is also excellent. 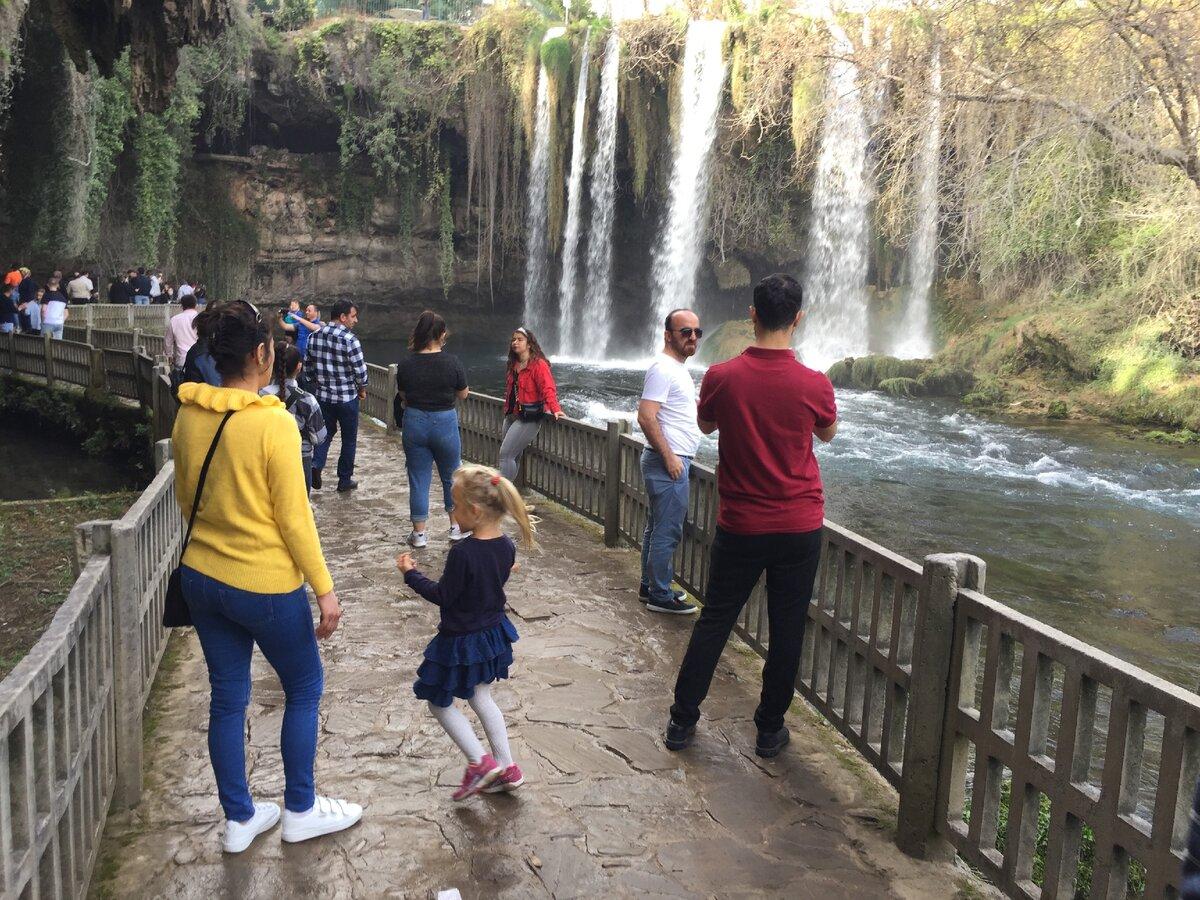 The National Park has good entertainment options. Among the available options are:

Near the park are bars, cafes, special places for snacks.

To get to the observation terraces on your own, you need to follow the signs that are installed along the pedestrian paths.

The noise of falling streams of water can be heard almost a kilometer radius from the waterfall.

If you wish, you can go to see the waterfalls from the sea (by speedboat). The advantage of this choice is that you can view the natural landmark for 10-15 minutes (the boat “slows down”).

There are also special tours for fans of extreme travel. The essence of these programs is to travel by boat directly under the waterfall.

Not far from the national park is located airstrip (about ten kilometers), so you can admire the viewports planes soaring in the sky.

Residents often refer to the lower waterfall as the “Falling Watermelon”. The unusual story is related to the watermelon melons flooded in the river. Read more about all the facts about the natural water attractions on ResortTurkey.