Genoa is an ancient Italian city that attracts tourists with the warm coastal waters of the bay, beautiful palaces and interesting festivals. 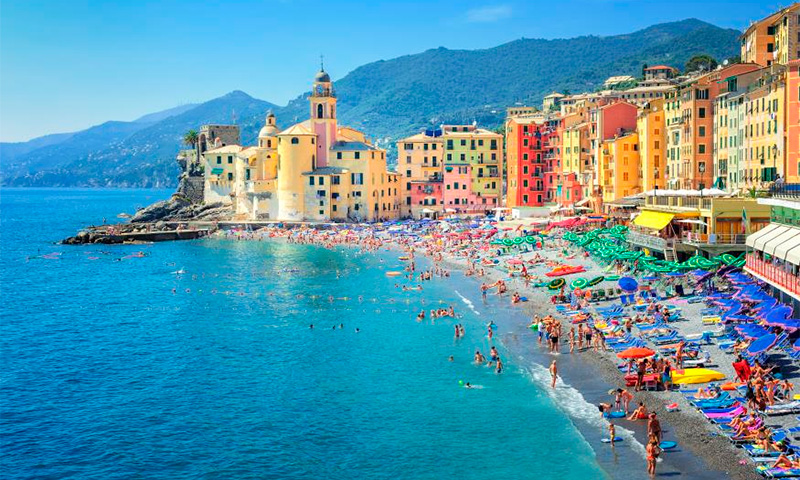 Who comes to Genoa and why

Genoa is the administrative center of Liguria, a vast region in northwestern Italy. This is the largest seaport, which has preserved the medieval Gothic castles, lush palaces in the Renaissance style, the majestic temples. Tourists come here to appreciate the original layout of the narrow medieval streets, see the Old Port, the Princely Villa, the Church of Maria de Castello.

In Genoa, there are many museums and monuments of a bygone era. Of great interest are the Lantern Lighthouse, the palaces on Garibaldi Street, the Art Gallery of the East and the Ethnographic Museum.

Genoa – a platform for active and fun festivals:

The sea coast of Genoa attracts fans of water sports. There are swimming schools, diving centers, kiteboarding courses, windsurfing, boat rentals and equipment rentals in the city. Beautiful boats are moored in the port. After renting one of them, tourists go on a boat trip or cruise along the Italian coast.

In Liguria guests do not get bored. Fans of extreme sports tickle the nerves by flying a paraglider or jumping with a parachute. For horseback riding and hiking there are special trails around Genoa. Families with children spend their time on picturesque beaches, at the Aquarium or in the parks. 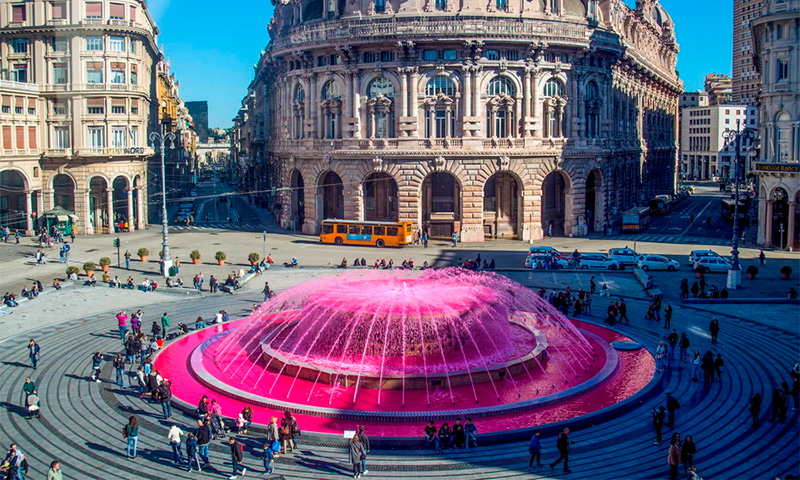 Genoa’s main square is easy to find between the business center and the Old Town. About 100 years ago it was restored and given an even square shape.

In the center there is a large fountain, one of the symbols of the city. The square is framed by ancient palaces and temples. Walking in the pedestrian zone, you can see the house of Duke Rafael de Ferrari, the Doge’s Palace, the Stock Exchange, the Carlo Felice theater, the Gothic church.

READ
Bethlehem - the city on the Jordan River, Israel 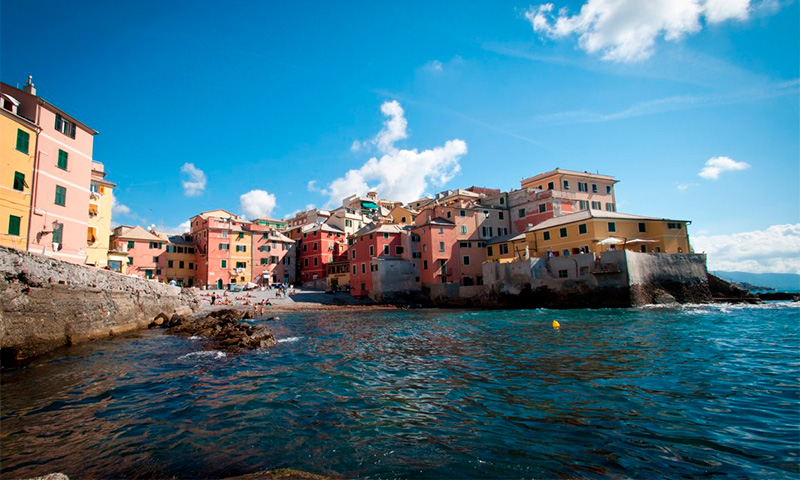 Its main attractions are the ancient castle on the Cape of Santa Chiara, the Church of Sant’Antonio, and the Neptune Square. 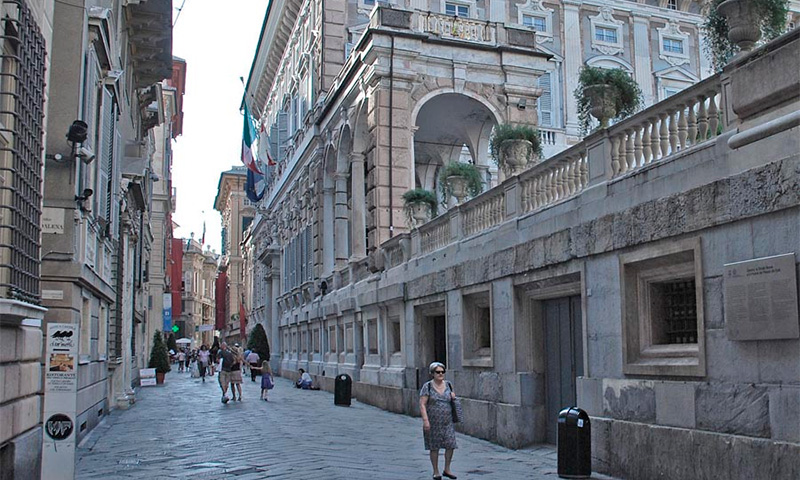 Via Garibaldi, one of the main streets of the historic center, is famous for its splendid Renaissance architecture. It was founded in 1550 by the architect Galeazzo Alessi. Its length is 250 meters and its width is 7.5 meters.

The wharf, which appeared in the 16th century, is one of the main sites of the city. For the 500th anniversary of America’s discovery it was converted into an entertainment and educational center. The project was prepared by the architect Renzo Piano, famous for his original design ideas.

On a tour of the Old Port people ride a panoramic elevator, visit the Biosphere, the Aquarium, the Palace of Sant Giorgio, the Lantern Lighthouse, and the Maritime Museum. In the harbor is moored three-masted galleon “Neptune”, fully imitating an ancient ship. 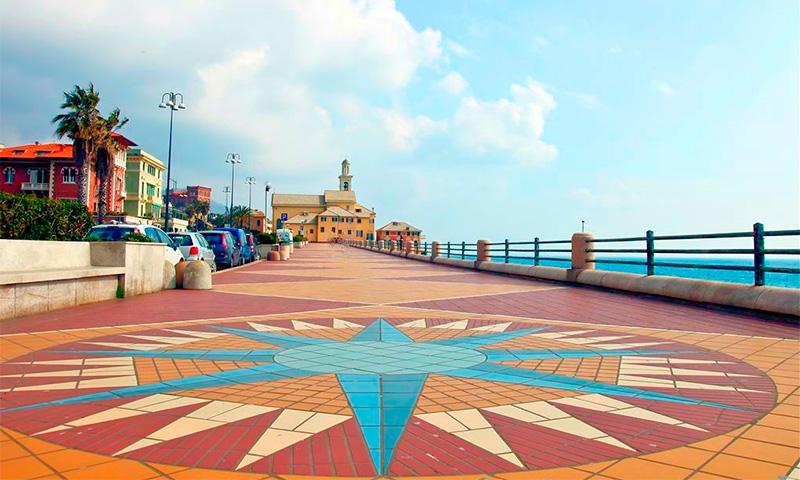 Genoa’s main promenade is 2.5 km long and connects the Boccadasse district with the Focce neighborhood. It is a lively place famous for its private beaches, restaurants, entertainment centers and sports fields. Walking here you can see the church of Sant Antoni, the Abbey of San Giuliano and the fragments of ancient fortress walls and buy souvenirs. 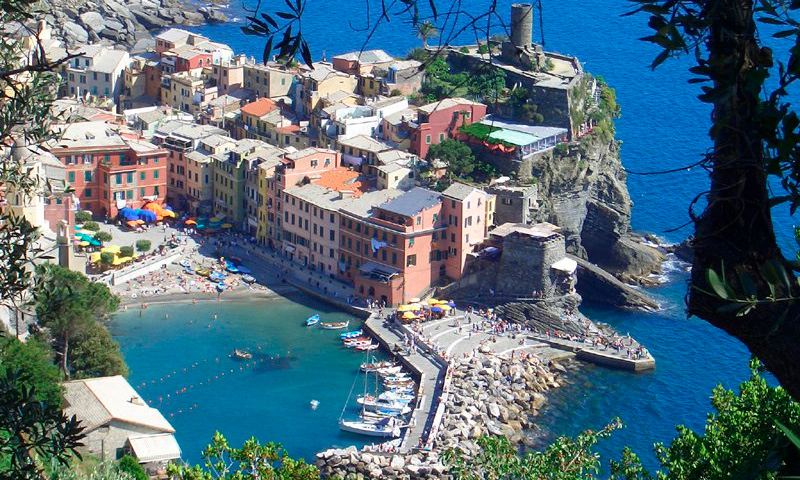 In the outskirts of Genoa there is a fishing village converted into a seaside resort. Hotels and resorts are surrounded by orange and olive groves and buried in the greenery. Along the ocean cliffs there is a road from which you can see the hills and the sea.

In the village there are villas belonging to the Genoese community – they are open museums of history and culture. On a tour you can explore the paintings and engravings of Italian artists, sculptures, ceramics, glass, antique furniture.

READ
7 things to know before you travel to Marrakech, Morocco 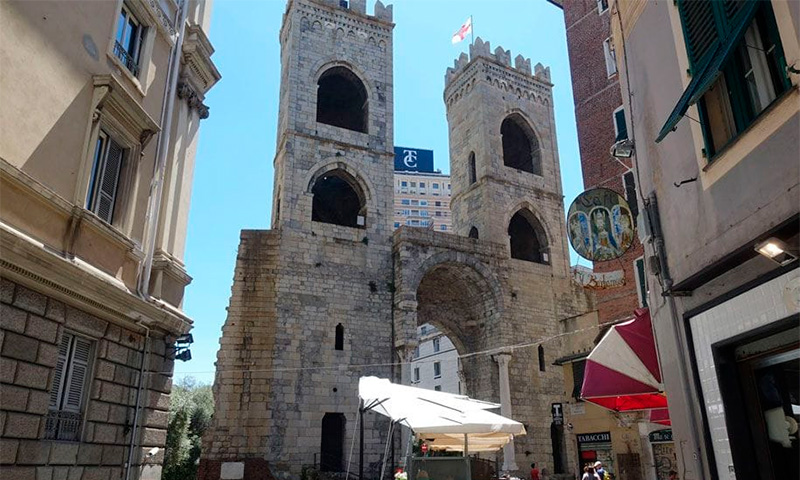 The well-preserved ancient gate to the city is part of a fortress wall dating back to the 12th century. They stand on top of a hill in the historic part of Genoa.

The gate is two powerful semicircular towers with crenellated roof and narrow windows, connected to each other by a stone arch. For many years the inner rooms were used as a prison. They have now been restored and are available for tours. 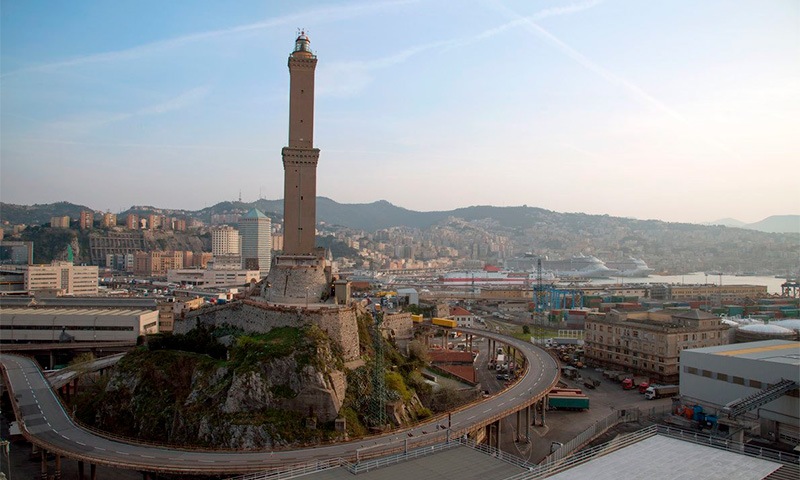 The oldest lighthouse of the port of Genoa is the highest lighthouse in the Mediterranean. The height of the stone tower is 77 meters.

At its summit lead 375 steep steps. The lighthouse was damaged and rebuilt several times, but did not cease to perform an important function: to give navigation signals to ships. In the last century, the structure was modernized with electricity and a rotating Fresnel lens, which improved light transmission. 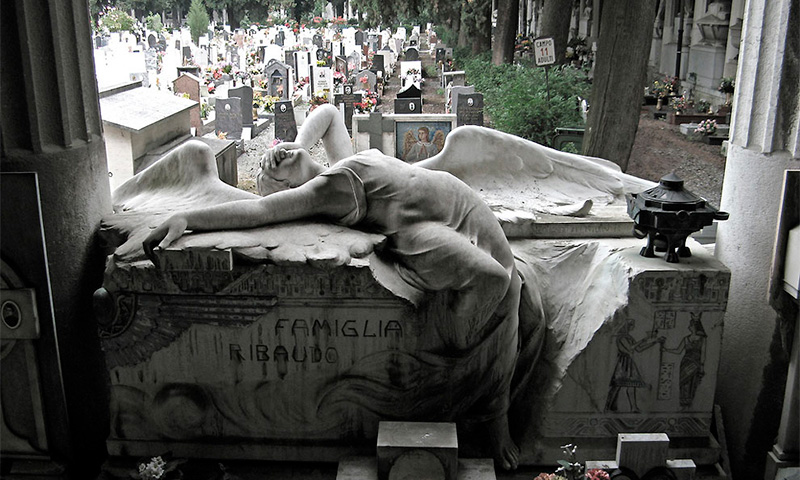 The famous cemetery is spread out on the hillside on the outskirts of Genoa. The first burials appeared here in 1804. The necropolis, designed by Carlo Barabino, quickly became popular with the local nobility. Among the park, planted with oleander, myrtle and laurel, famous people were buried.

There is a mausoleum of the national hero Giuseppe Mazzini, the graves of the opera singer Michele Novaro, the writer Felice Romani, the violinist Ernesto Sivori. The necropolis is decorated with marble sculptures of high artistic value.

Christ of the Abyss 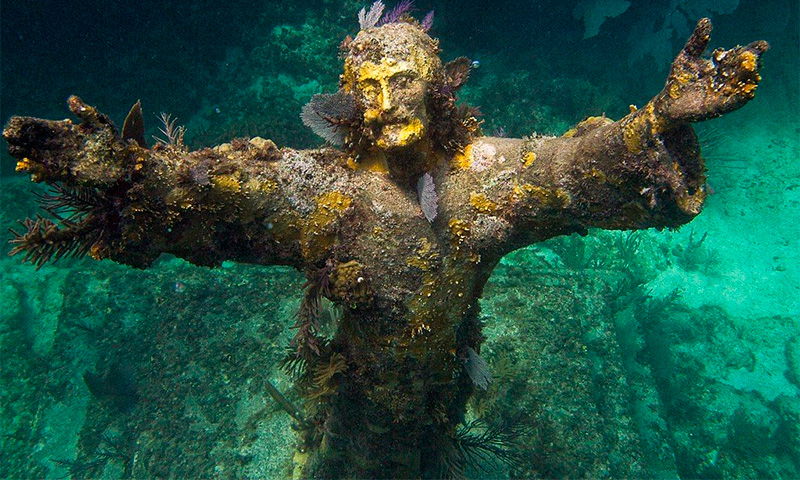 In the bay of San Fruttuoso under the water is a sculpture of Jesus Christ, 2.5 meters high. It was placed on the bottom of the sea on August 22, 1954 at the initiative of the famous diver Duilio Marcante. In this way he commemorated a fellow scuba diver who had died in the bay.

The bronze statue stands with its arms outstretched upward. The savior speaks to God through the thickness of the water and asks for protection for people who have tied their lives to the sea. Christ of the Abyss is a popular attraction with tourists and divers. 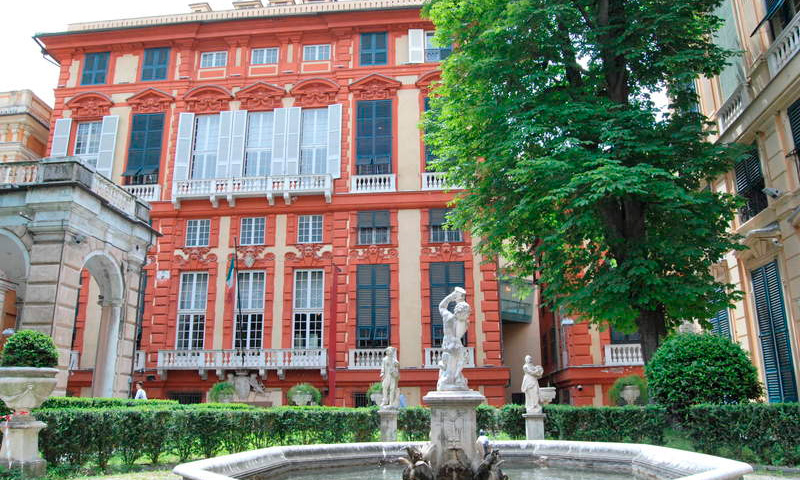 Via Garibaldi adorns a splendid Renaissance palace, built in 1675 for the family of the Duke of Brignole Sale. The exterior walls, lined with bright plaster, have small balconies, windows, and are finished with tracery stucco. The inner chambers are decorated with tapestries and frescoes. 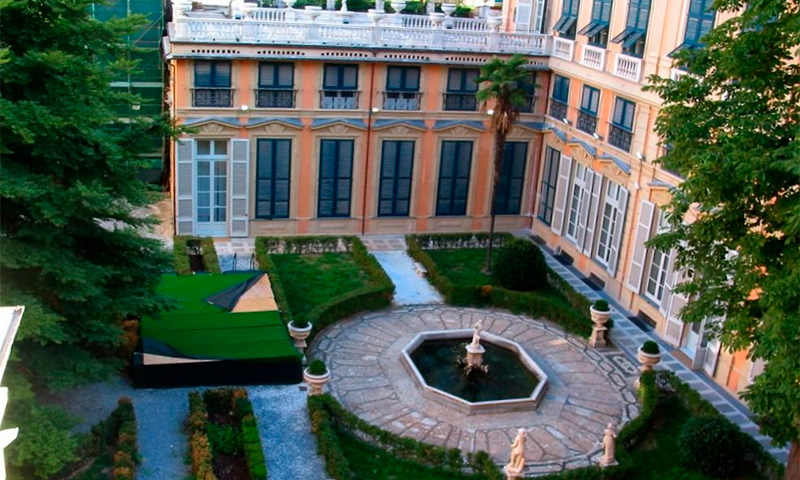 In 1540 the elegant White Palace was built in the center of Genoa at the behest of Luca Grimaldi. The architectural complex changed owners several times, each of whom carried out renovations, redecorating as they saw fit. The last owner bequeathed Palazzo Bianco to the city.

Since 1889 it has been home to an art museum. Its spacious halls display works by Van Dyck, Rubens, Paolo Veronese, and Barnab da Modena. Paintings, frescoes, engravings, and sculptures are on display. 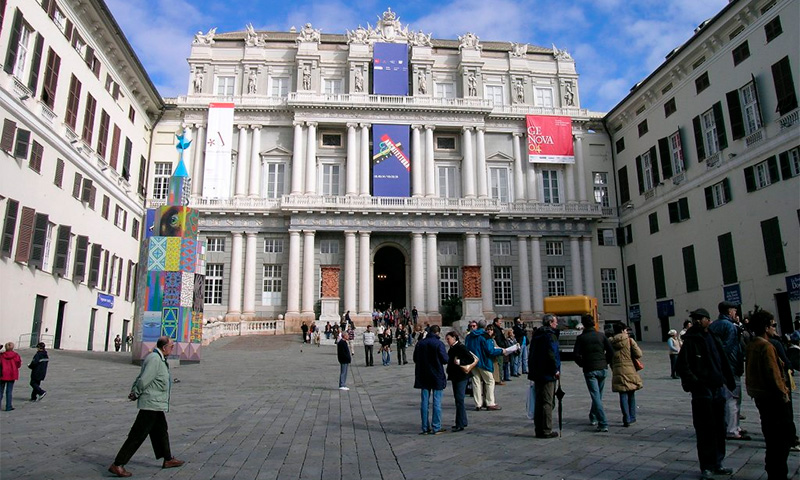 In Piazza Ferrari there is a three-story bright mansion built three hundred years ago for the rulers of the city. The facade of the Doge’s Palace is decorated with marble columns and sculptures. The rooms are full of sun and light, so they are used for celebrations and exhibitions.

Part of the palace is converted into a museum. There are paintings of Italian and foreign artists, antique furniture, silk tapestries. 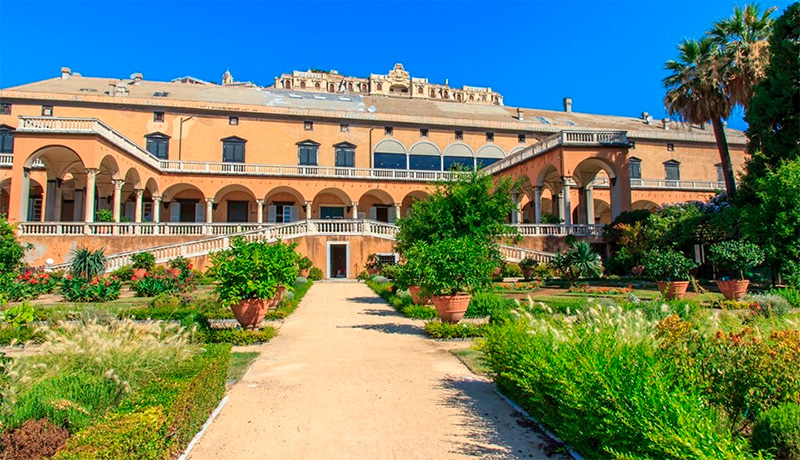 Not far from Ferrari Square on the coast of the Gulf of Genoa you can find the Princely Villa, built in the middle of the 16th century. Construction was carried out under the direction of Prince Andrea Doria. The palace is decorated with an arched terrace, balconies and columns.

The princely apartments are decorated with murals and antique frescos. In the rooms the magnificent aristocratic interior is preserved. In front of the main entrance there is a large marble fountain in the shape of Neptune. The palace is surrounded by a park in the Italian style. 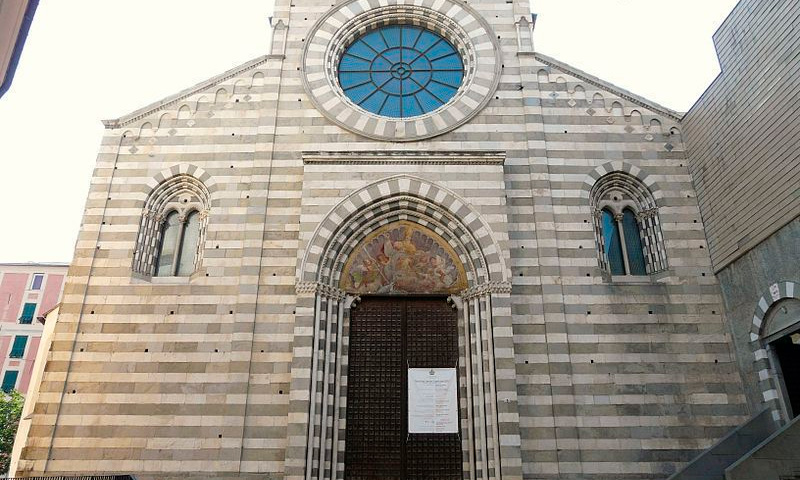 The Gothic church in the center of Genoa, erected by the Augustinians in 1260, is well preserved to this day. The façade, with its bichromatic bands of blue stone and white marble, attracts attention. Above the door is a large round rose window.

Inside the church there is a museum. In it ancient frescos, sculptures and religious utensils are preserved. The pearl of the exposition is the marble tombstone of Margherita di Bramante, dating back to the XIV century. 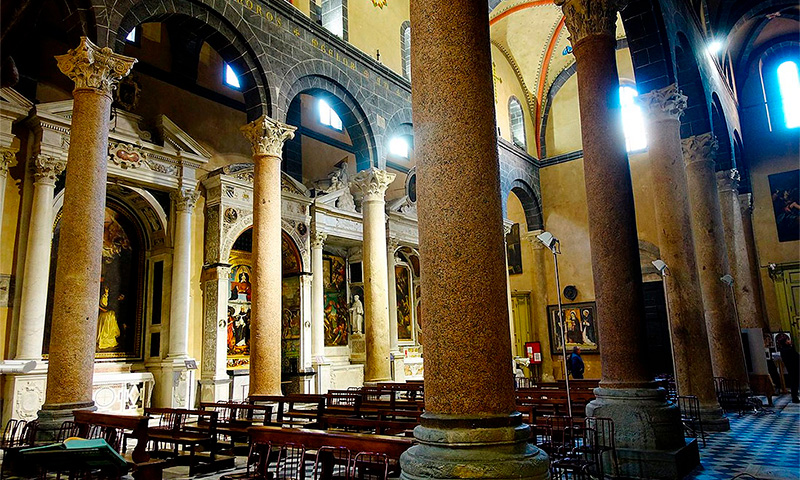 The 10th century church stands on the hill of Castello. It was built by the Dominicans on the site of an ancient Roman temple. The Romanesque building is simple and elegant. Inside there are works of art donated to the church at different historical periods. 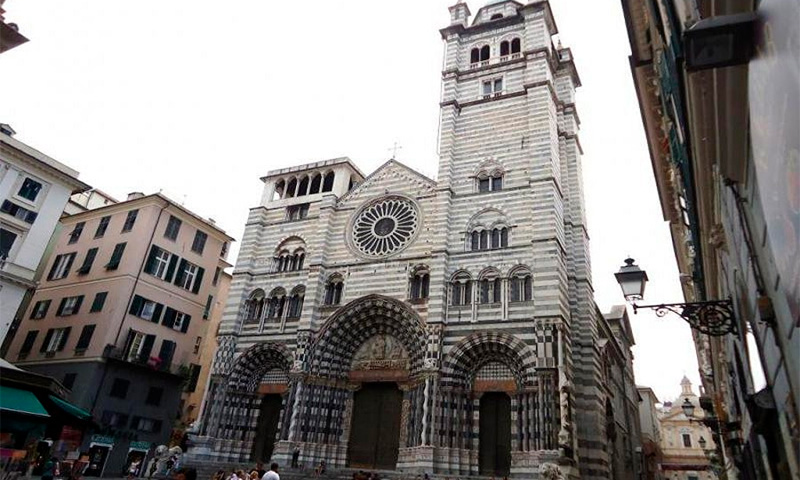 A cathedral dedicated to St. Lawrence, erected in the 12th century. The medieval Romanesque structure has a square bell tower with small arched windows, a central rose window, and a viewing platform under the roof.

At the cathedral there is a museum of church treasures. Among the exhibits is the Holy Chalice, brought from Caesarea. Legend has it that Jesus Christ drank from it during the Last Supper. 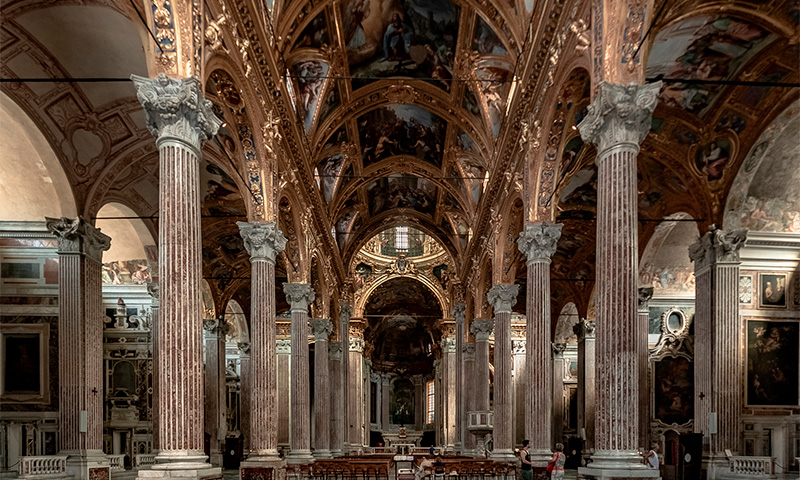 The Baroque Catholic cathedral appeared in Genoa in the 17th century. The marble-clad facade is decorated with a triangular pediment and columns. On the sides there are towers topped with graceful domes. The interior decoration is represented by the paintings of the famous Italian painters on religious themes.

The central dome is painted with the Assumption fresco by Giovanni Andrea Ansaldo. The chapels are decorated with images of saints, sculptures of Madonna and archangels. 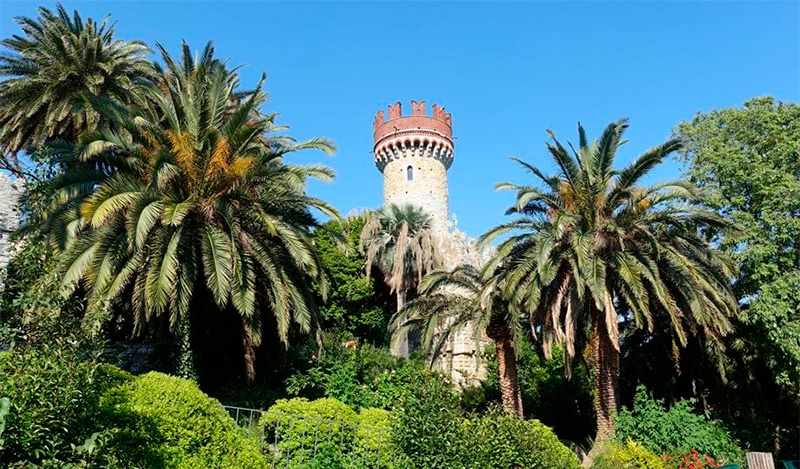 The Gothic five-story castle, built at the end of the 19th century on Montegalletto Hill, is well visible from all corners of the city. Inside the high tower is a museum of world culture, presenting archaeological and ethnographic finds collected by the castle’s former owners during their travels in Africa, Oceania and the Americas. 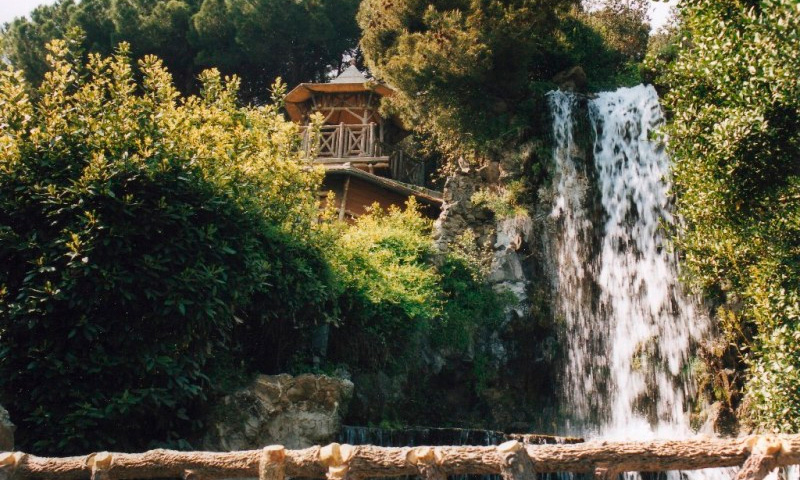 The museum exhibition, amassed by Edoardo Chiossone, introduces the art of Asian countries. The artist, who lived in the East for more than 20 years, bequeathed the collection to the city.

The House of Christopher Columbus 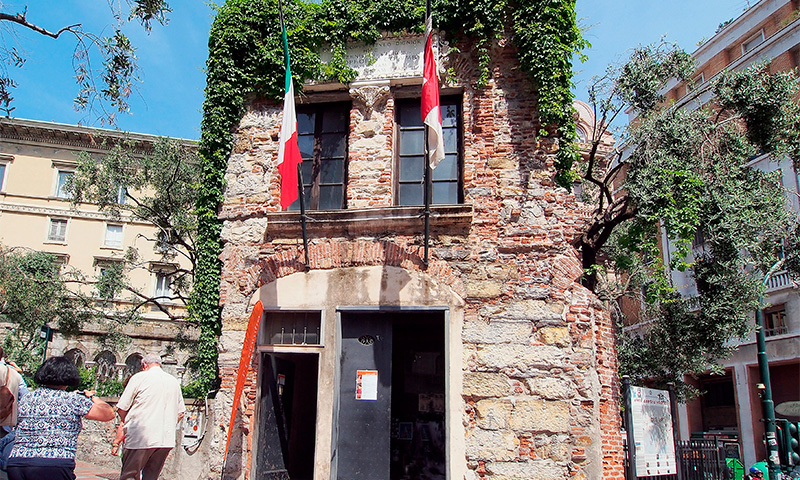 It was in Genoa where Christopher Columbus was born. The house where the famous navigator lived was destroyed during the siege of the city in 1684. But it was soon rebuilt from the ruins, having changed beyond recognition. Now there is a museum in the two-story building, preserving personal belongings and documents belonging to Christopher Columbus. 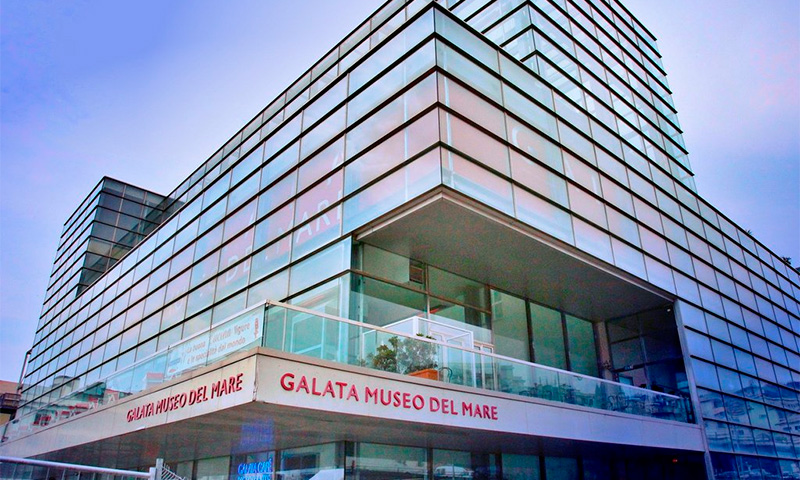 In 2004, the old shipyard became home to the Maritime Museum. Housed in a four-story 17th century mansion, the exhibit reveals the history of seafaring.

Mock-ups of old and modern ships, pre-Columbian maps and atlases, navigation and hydrographic objects attract visitors’ attention. In a separate exhibition there are paintings of ships and seascapes. 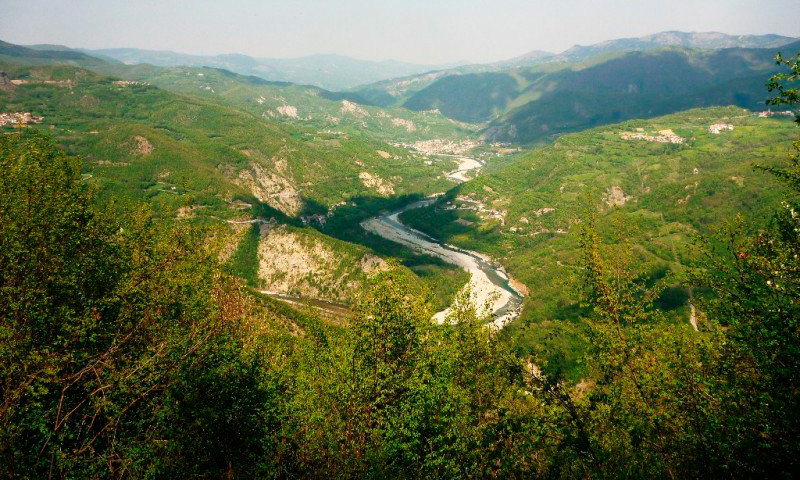 Within the park are preserved ancient cave paintings, an ancient abbey and inactive manganese mines. 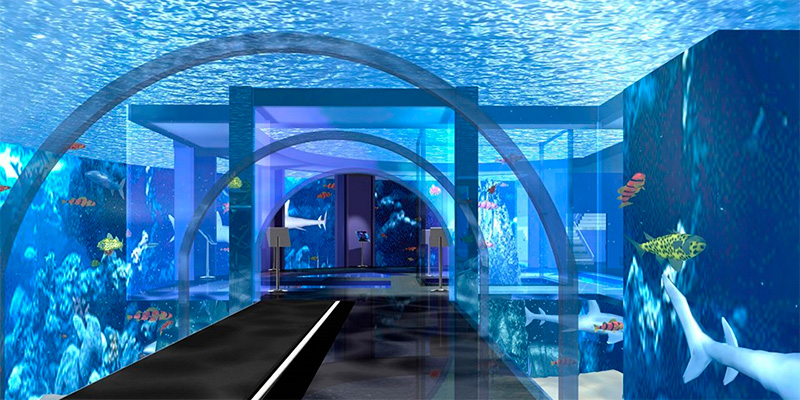 The largest Italian aquarium opened in Genoa in the area of the old harbor. It is dedicated to the famous native of the city, Christopher Columbus, so it is shaped like a ship. In the large aquariums live inhabitants of different seas and oceans. 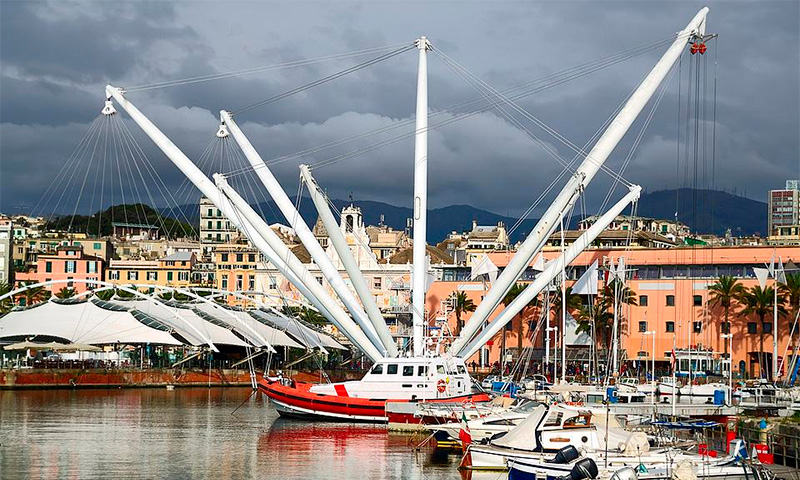 A panoramic elevator is installed in the old port. The attraction is a metal construction, which raises people in a round cabin to a height of 40 meters.

The capsule is designed for 30 people, each person has a special place. Excellent panorama of the port and the historic city center opens up from the top. The glass wall of the capsule provides an excellent overview and allows taking high-quality photos. 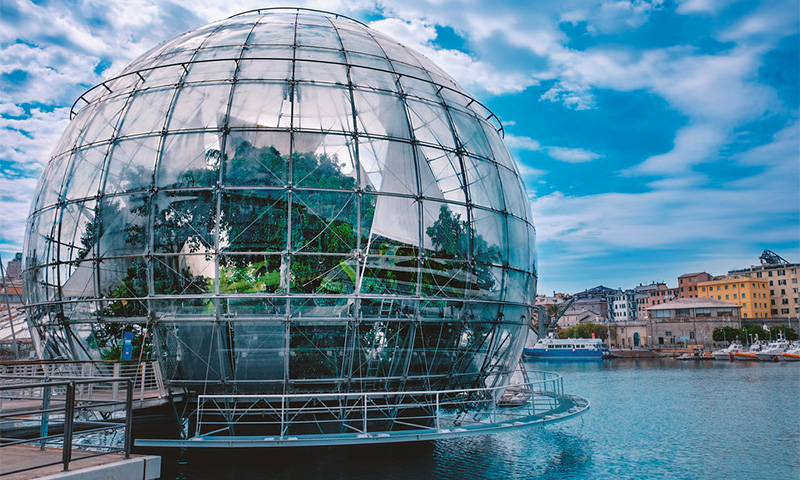 Near the Aquarium you can see a twenty-meter transparent sphere located on the shore of the bay. The structure, imitating the planet Earth, is actually a botanical garden. Inside is a greenhouse with tropical plants.