Top 25: The main sights in and around Ryazan worth visiting 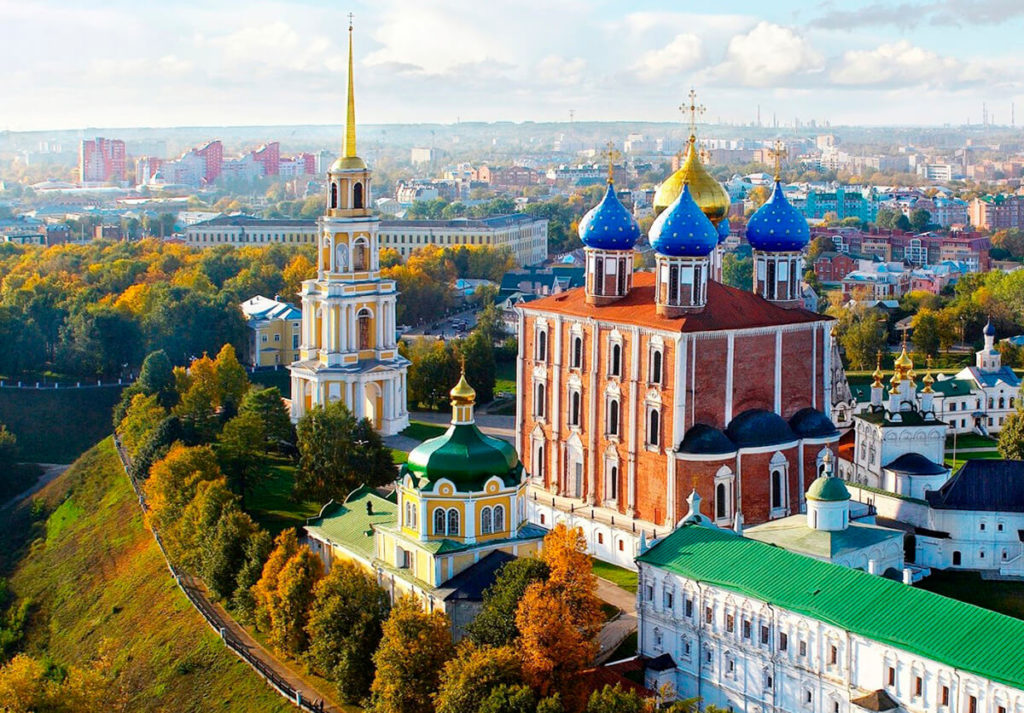 Brief description Ryazan is one of the oldest cities in Russia, which has almost a thousand years of history and is home to many famous personalities: Konstantin Paustovsky, Sergei Yesenin, Konstantin Tsiolkovsky. In addition, people go to Ryazan and the Ryazan region to visit the many sights that are located there.

Tripster.ru – the leading online booking service for excursions in Russia.

Ostrovok.ru – one of the most famous Booking analogues in Russia. It offers accommodation around the world.

Aviasales.ru – an assistant in the search for cheap air tickets.

Travelata.ru – hypermarket tours with discounts up to 50%.

Where to go and what to see in Ryazan in 1 day by yourself?

The most interesting and beautiful places, photos with descriptions.

There are more than 50 objects of the Kremlin architecture in Russia, but many of them are not preserved or have been destroyed at all. The Kremlin in Ryazan has survived to this day, preserving the architecture and spirit of that era. According to written sources, originally the Kremlin was a fortress, which was built simultaneously with the city, then called Pereyaslavl-Ryazan. The need for construction was due to the proximity to the border with the Tatar-Mongol yoke.

But it is impossible to say that the Ryazan Kremlin has reached us in its original form, as well as any historic building. At the end of XVIII century under the government of Catherine II the city received its present name, and also began to actively rebuild. In particular the dilapidated walls and towers of the Kremlin were demolished, after which a major reconstruction began.

During World War II Soviet artillery firing points were located in the Kremlin. Although the city was bombed more than once, the building was not hit. There is a legend that German pilots were given an order not to drop bombs on the Ryazan Kremlin in order to preserve the cultural heritage.

Now the Kremlin is a huge architectural ensemble, where you can enter through one and 4 gates. Connoisseurs of orthodox architecture will be pleased with the many cathedrals located inside, and history buffs will be able to satisfy their interest in one of the museums and pay attention to the numerous exhibitions on the territory of the Kremlin. 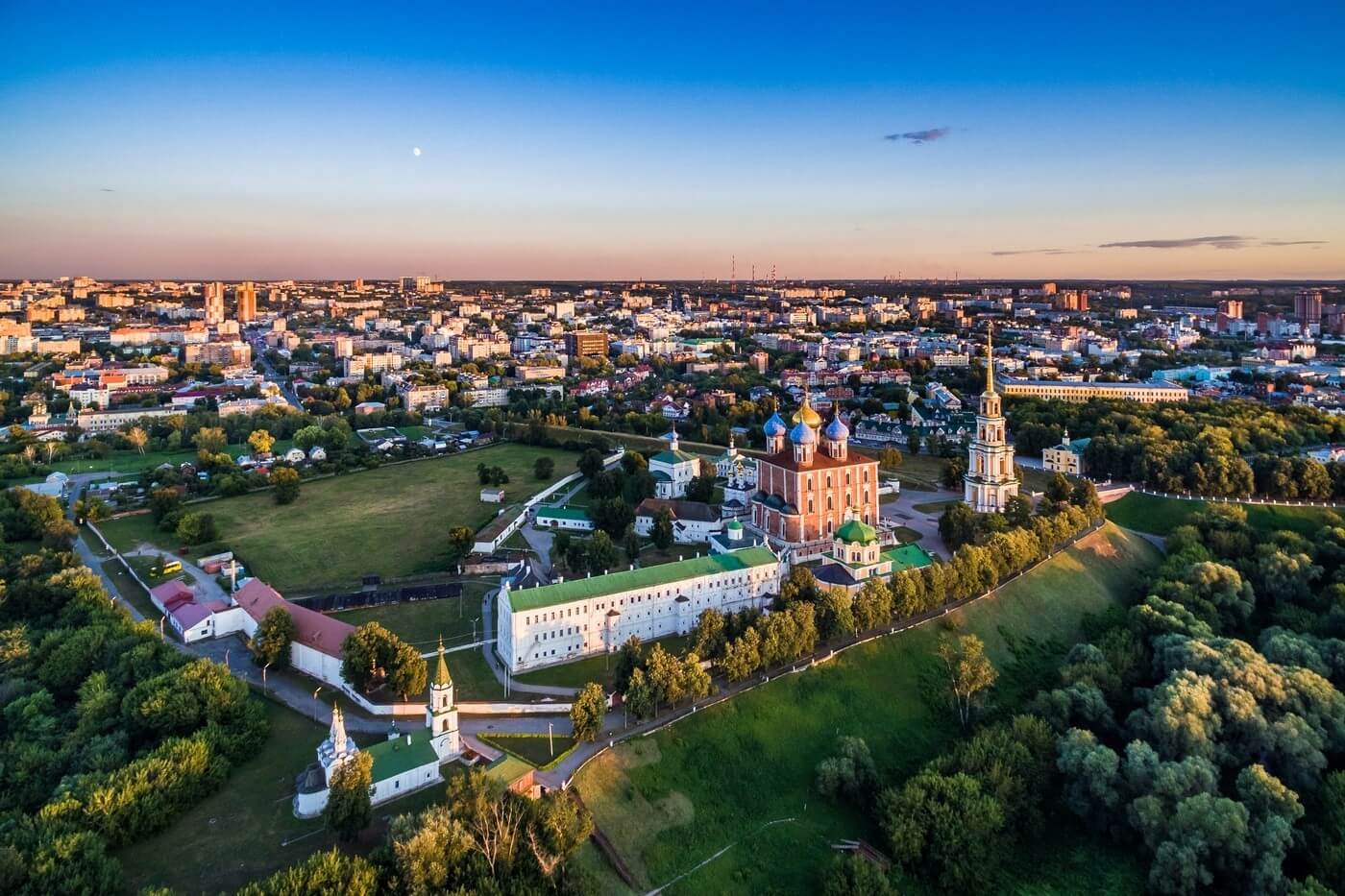 After 100 years, the temple greatly dilapidated, the roof began to leak, snow flew into the holes in the winter, and there were dozens of bird’s nests under the roof. Then the question arose: To dismantle the cathedral or to find money to rebuild it. Eventually, through the efforts of an architect from Moscow and the local population, the building was restored and preserved to this day.

After the October Revolution in 1917, services stopped, the church property was confiscated, and a planetarium and museum were opened in the building. Assumption Cathedral back into the possession of the Ryazan diocese in 1992, after which another major restoration of the building and its interior decoration was carried out.

The site contains a collection of attractions of Ryazan – photos, descriptions and tips for travelers. The list is based on popular travel guides and presented by type, name and rating. Here you can find answers to questions: what to see in Ryazan, where to go and where are the popular and interesting places of Ryazan.

Assumption Cathedral (XVI-XVII century) – Cathedral of the Ryazan Metropolis of the Russian Orthodox Church and the city of Ryazan. Located on the site of the green (powder) chambers, and the Prikaznaya House. Was built by architect Yakov Bukhvostov in place of collapsed white-stone Assumption Cathedral, built by his predecessors. Today it has the highest iconostasis in Russia. As in many old Russian cities, Ryazan has a Kremlin – a kind of point of reference in history, an important architectural landmark.

Ryazan Kremlin, the oldest historical and architectural museum in Russia, is a whole complex of buildings-monuments of architecture: Old Russian and Classicism style. The oldest structures date back to the 15th century – the last period of prosperity of the Ryazan princedom. Unfortunately, not all historical and architectural heritage of the Kremlin has survived unchanged to this day. Some elements – ramparts and towers – have not survived at all. Nevertheless this unique architectural landscape, as it exists today, greatly decorates the city. The view of the Kremlin from the Trubezh river embankment is majestic and noble.

An extensive museum, now located in the Kremlin, gives a complete picture of the culture and art of Pereyaslavl Ryazan – a fortified ancient fortress, from which, in fact, modern Ryazan began.

Access to the territory of the Kremlin is free.

And what sights of Ryazan did you like? Next to the photo there are icons, by clicking on which you can rate this or that place. The Theater Square used to be called the Yamskaya Sloboda, which was located on the southern outskirts of the city. On the site of the Emerald store and the Institute of Culture there were stone towers, marking the boundary of the city. In the early 1940s, they were demolished.

In 1788 was erected church of St. Nicholas and Yamskaya. In 1822 a bell tower was added to the church.

On May 30, 1819, Emperor Alexander I, who visited Ryazan, stayed in the southern part of the city in a “small, but clean and neat” house. At the request of local residents in memory of this event in the center of Yamskaya Square was erected a chapel. It stood on the spot where the fountain now stands. After the revolution of 1917 the chapel was torn down. However, the appearance of the village remained unchanged until the 1940s.

The square’s landmarks include: the Drama Theater, the “Masks” fountain, the Ryazan Institute (branch) of MGUKI, the monument to K. Tsiolkovsky

In photo mode you can view the sights in Ryazan by photo only. The picturesque White Lake is located in Klepikovsky district of Ryazan Region, 22 kilometers from the town of Spas-Klepiki, north of Lake Velikoye. The area of the lake is 33.4 hectares, its length is 848 meters, and its maximum depth is more than 100 meters. In addition to the anomalous depth, the lake is distinguished by unusual water purity. The lake is of karstic origin and was formed by the erosion of rocks.

The lake is surrounded by pine forests, its banks are covered with reeds. The lake has a muddy bottom and a sandy shore. Underwater vegetation of the lake is represented by a lot of algae. In the lake inhabit such species of fish as ide, pike, roach, tench, perch, ruff, crucian carp, gudgeon. The lake is also home to crayfish. The lake is great for fishing, both from the shore and from a boat. Archangel Cathedral is a monument of old Russian architecture of 15th-17th centuries, one of the oldest buildings of Ryazan Kremlin. This is a former princely house church and at the same time – the burial vault of the Ryazan bishops (22 burials), including the famous religious and public figure, associate of Peter the Great Stephen Yavorsky. The cathedral is a four-domed cross-winged one-domed temple with three apses and three entrances. Despite the considerable rebuilding after a destructive fire in 1647, the cathedral preserved typical features of the 15th century architecture. In the 19th century a lowered volume refectory with a splendid portal in the Pseudo-Russian style was added to the cathedral. Ancient settlement of Staraya Ryazan is located a few kilometers from the town of Spassk-Ryazansky, on the banks of the Oka. The city of Staraya Ryazan, at that time called Ryazan, was the capital of the Ryazan Duchy in the XII – XIII centuries. The first written mention of Ryazan is dated 1096. During its heyday, Ryazan was a fortified, powerful outpost. In 1237, Ryazan was completely destroyed by Batyi Khan. Later the city was repeatedly destroyed and rebuilt again. By the middle of the 14th century the capital was gradually moved to Pereyaslavl – Ryazan.

Old Ryazan consisted of Northern and Southern fortified settlements, built later. Nowadays the area of the ancient settlement is about 60 hectares. Here you can see what remains of stone foundations of three churches: Assumption, Boris and Gleb, and Savior. Above the remnants of the foundation of the Boris and Gleb Cathedral, a stone arch is preserved. The earth ramparts around the settlement are also preserved.

Since the XIX century, on the territory of the settlement repeatedly conducted archaeological excavations. In the process of excavations there were found craft workshops, mass graves of residents of Old Ryazan, arrowheads, treasures with gold and silver products and much more. In 1822 a treasure trove with unique gold jewelry was found here, in 1950 and 1966 treasure troves with valuable jewelry were discovered. The last known treasure was found on the territory of the ancient settlement in 2005. All in all, 16 treasures have been found there.

The ancient settlement of Old Ryazan is included in the Ryazan Historical and Architectural Museum-Ryazan Kremlin. The Oka State Nature Biosphere Reserve is located on the territory of Spassky and Spas-Klepikovsky districts of the Ryazan region, on the southeast of the Meshcherskaya lowlands. It was created in 1935 in order to protect the Russian vykhuli. The area of the reserve is 55,744 hectares, with a conservation zone of 22,985 hectares around the reserve. Forests, bogs, open fields, lakes and rivers are located within the reserve.

Pine and birch forests predominate on the territory of the reserve. There is a large number of black alder forests – peat bogs or swampy forests where black alder grows. The real pearl of the Reserve is the floodplain meadows. There are rare plants in the reserve, including those listed in the Red Book, such as the hellebore, the real lady’s slipper orchid, the neotisantha clobuccana and other plants.

The animal world of the reserve is particularly rich. It is represented by mammals, birds, amphibians, reptiles, fish and invertebrates. Among the protected rare animals there are Russian otter, river otter, European mink, edible and grass frogs, white-tailed eagle and other representatives of fauna. Numerous populations of various rodents, wolves, foxes, moose, roe deer, sandpipers, cuckoos, common grasshoppers, vipers and so on. The water bodies are inhabited by numerous perch, pike, bream, ide and other fish species. Also, in the reserve operates a nursery of cranes of rare species, among which the Siberian crane occupies a special place.

Would you like to know how well you know the sights of Ryazan? The resort village is located 11 kilometers from the left bank of the Ryazan River at the entrance to the Meshchera on the bank of the old river Oka. Near the territory of the district the Solotcha river of the same name flows into the old river.

The neighborhood is surrounded from all sides by the Meshcheri National Park, the urban forests of the area are protected – multi-storey building is prohibited here.

Solotcha has a lot of old wooden houses with carved porches and colored stained-glass windows. In one of the streets there is a house that used to belong to a famous painter and engraver academician I. P. Pozhalustin at the end of the 19th century. In this house at different times lived, worked and visited V. Veresaev, K. Paustovsky, A. Gaidar, A. Fadeev, K. Simonov, V. Grossman, F. Panfyorov, A. Solzhenitsyn, V. Shalamov and others.

In Solotcha is Solotchinsky monastery of the Nativity of the Virgin, founded in 1390 by Prince Oleg Ivanovich of Ryazan.

The most popular attractions in Ryazan with descriptions and photos for all tastes. Choose the best places to visit famous places in Ryazan on our site.