The British Isles are famous for legends of ghosts, witchcraft and other amazing things. These stories attract those who believe in the existence of ghosts and otherworldly forces every year.

In honor of the approaching Halloween, I invite you tonight to take a virtual walk through the dark and mysterious places where sometimes unexplained phenomena take place. 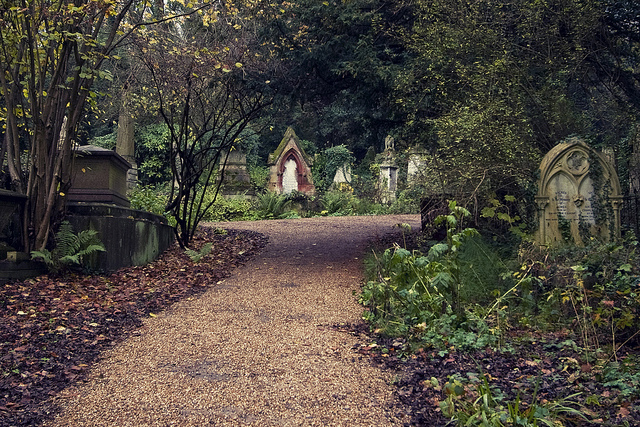 Highgate Cemetery is the perfect place to make a horror film. Ancient graves and crypts, tombstones wrapped in ivy, headless angels. There are many chilling stories associated with this place. In the sixties the London newspapers wrote about some very strange incidents – a vampire allegedly got up here and attacked passers-by who didn’t have time to leave the area before dark. A lot of amazing things were happening here, and there were even eyewitnesses who watched the reanimated dead emerge from the graves under the cover of darkness. So, my friends, it’s better to avoid this place at night, and come here during the day to examine closely the bright examples of Gothic architecture presented here, and to find one of the main attractions of the cemetery – the tomb of Karl Marx.

The parish priest’s mansion, built on the site of a ruined Benedictine monastery in the village of Borli, became famous for numerous paranormal phenomena. In the 1920s, mysterious events occurring in the house were even mentioned in the pages of the Daily Mail. According to one legend, a nun who lived in the very old monastery that later replaced the mansion fell in love with a monk from a neighbouring monastery. The monk reciprocated, but before they could escape, the affair was discovered and the lovers were brutally murdered. According to one version, the nun was walled up alive within the walls of her monastery. Since then, the sad silhouette of the nun has repeatedly appeared near the site of her death. Harry Price, a famous researcher of such mysterious phenomena, has devoted two books to the mansion, in which he describes the supernatural events in detail. In 1939 the house burned down, but the ghosts still come out for their quiet night walks, scaring the locals and attracting poltergeist fans from all over the world.

Pendle Hill in Lancashire was haunted in the 17th century as a place where witches would gather for Sabbaths and perform their witchcraft rituals. The area is associated with one of the most notorious trials against witches, which in 1612 resulted in the hanging of ten men who “sold their souls to the devil and killed many innocent people by means of witchcraft. Since then dark ghosts have terrorized the Pendle Hill neighborhood, and God forbid you should get lost here on a cold night! But some intrepid explorers of otherworldly forces climb the mountain every Halloween, hoping to witness paranormal phenomena.

The Red Lion pub, Avebury The Red Lion is not the only English pub to be haunted. Perhaps the reason for such popularity among ghosts lies in the fact that over the years the old buildings have become silent eyewitnesses to many incidents and managed to “grow” legends. Though, perhaps, the whole point is that even ghosts sometimes want to knock over a pint or two of aromatic ale (sometimes – literally!). Anyway, the Red Lion boasts a reputation as Britain’s most enchanted drinking establishment. It is remarkable because of its location inside the ancient and the longest in Europe Avebury Stone Circle – a circular composition of stone blocks, which served as a cult pagan structure long before Stonehenge was built. The most famous ghost of the Red Lion pub is the spirit of a woman called Florrie who lived in the building in the 17th century when it was a farm. Her husband was a soldier. When he returned from the war, he found Florrie with a lover. In a fit of jealousy, he shot his rival and stabbed his unfaithful wife and threw her body into a well. Florrie’s spirit has been appearing at the site ever since. When crockery in the pub inexplicably disappears and salt and pepper shakers start bouncing, there’s no doubt that it’s all Florrie’s doing.

READ
Holidays in Balchik will introduce you to the culture of the country. Balchik's main sights

Ancient Ram Inn, Wotton-under-Edge Even the most hardened sceptic, who denies the existence of ghosts and the afterlife, will shudder with inexplicable horror on a visit to this 12th-century house, once a tavern and inn. Creaky floorboards, bare uneven walls, an inexplicable grave cold, the smell of damp, small dimly lit rooms – this is exactly how a real haunted house should be! The current owner of this spooky place is happy to arrange small tours for anyone who wants to visit, detailing all the cases of paranormal activity seen in the house over the past few centuries. Every nook here is haunted by some creepy demon or ghost, and in the middle of the night you can hear banging, grinding, and crying babies. What hasn’t happened here? To begin with, the house was built on the site of ancient pagan burials, and in the Middle Ages satanists used to gather here and hold ritual murders – this is confirmed by the results of excavations.

Glamis Castle, Scotland One of the most beautiful castles in Scotland, Glamis Castle is like an illustration to fairy tales about beautiful princesses, wicked witches and dragons. By the way, Elizabeth Bowes-Lyon, the beloved Queen Mother, spent her childhood here. Impressive architecture and 600 years of history isn’t the only thing that attracts tourists here. Many mystical stories and legends are associated with this place. The castle is home to several exuberant ghosts. Perhaps the most frightening is the Bearded Earl (Lord Glamis, who lived here in the XV century). He was a cruel and ruthless man. One day he decided to gamble on Sunday, but none of the castle’s servants or guests supported his idea – gambling on Sunday was a sin. Outraged at this disobedience, the Earl exclaimed: “I am not afraid to play cards with the devil himself!” The next day a strange stranger appeared at the castle. He turned out to be the devil, who had condemned the Bearded Earl to eternal torment. Another ghost of Glamis Castle was the so-called White Lady. In 1532 Lady Janet Douglas, mistress of the castle, was accused of witchcraft and burned alive at the stake. Since then the silhouette of the White Lady, enveloped in flames, regularly appears above the towers of the castle. There are also many legends about the Chamber of Secrets and the dark secrets it hid. One such terrible secret is the Monster of Glamis, the ghost of an incredibly ugly child who was kept locked up his entire life.

READ
Italy's most mysterious and spooky villages to visit in November

The Tower of London The Tower of London is not only one of the main attractions of the British capital. The place has a strong connection with the otherworld. However, it’s not as surprising as it might seem at first glance, given how many people have been hanged, beheaded and tortured within the walls of this grim fortress. Among the ghosts of the Tower there are VIPs: they were of noble birth, possessed power and money – and in a moment they lost everything. And such personalities are not ready to leave this world quietly! Take, for example, the ghost of Anne Boleyn, the second wife of Henry VIII, beheaded here in 1536, who regularly appears in the Tower.

The blood of a fierce battle soaked these Scottish lands. An important battle that influenced the course of British history was fought here during the Second Jacobite Rebellion of April 16, 1746 – between the Scottish Home Guard led by Charles Edward Stuart, the pretender to the British throne, and the British government troops, led by the Duke of Cumberland. The result of the battle was the complete defeat of the Scots. Incidentally, the battle of Culloden was the last field battle on the island of Great Britain. Of course, such a bloody and cruel battle left many souls on the battlefield, doomed to eternal torment. Since then, every year on the day of the Battle of Culloden, the cries of warriors continue to fight an eternal battle in the afterlife over the wasteland.

A quiet Welsh manor house with an unpronounceable name seems rather harmless at first glance. But it isn’t! Ghosts from the dark past still haunt the inhabitants of the old house. Unexplained phenomena occur here literally at every step: in the corridors, on the stairs, in the rooms. People have said they have not only seen ghosts, but have touched them and even smelled their scents; apparently, the otherworldly forces that love the place love violets, lavender, and… roast beef! The spirit of Edward Pritchard (he was Lord of the Manor during the English Civil War in the 17th century) is still haunted. Isn’t that why he is so tormented that he defected to the king by betraying his associates. The ghost of a housekeeper named Mattie, who lived here in the 19th century, wanders the staircases and corridors at night, rustling her clothes. A mysterious stone pentagram was found in one of the manor’s walls: I wonder if it was put there to ward off evil spirits or, on the contrary, to put a curse on the house’s inhabitants.

Berry Pomeroy Castle, Devon This 14th-century castle is haunted by several ghosts from the Pomeroy family to whom it belonged. Among them are the White Lady and the Blue Lady. According to legend, the White Lady is Lady Margaret Pomeroy, who was starved to death by her own sister, Lady Eleanor. Eleanor was always jealous of her younger and prettier sister, so she locked her in a castle tower and kept her there until the poor thing starved to death. Margaret’s ghost, a white figure with long flowing hair, is often seen hovering over the very tower in which she died. The Blue Lady, a ghost in a blue hooded cape, also bore the name of Powomroy. Legend has it that she strangled her own child, and so cannot find peace. Sometimes in the vicinity of the castle you can hear the creaking of non-existent doors, someone’s footsteps and children’s cries. The rumor attributes them to the ghost of that very unfortunate child.

Maybe the ghost stories are just beautiful legends invented by someone. Then why do completely different people encounter paranormal phenomena over and over again? In any case, one thing is clear: Britain holds many dark secrets and unsolved mysteries – that’s why we love it!