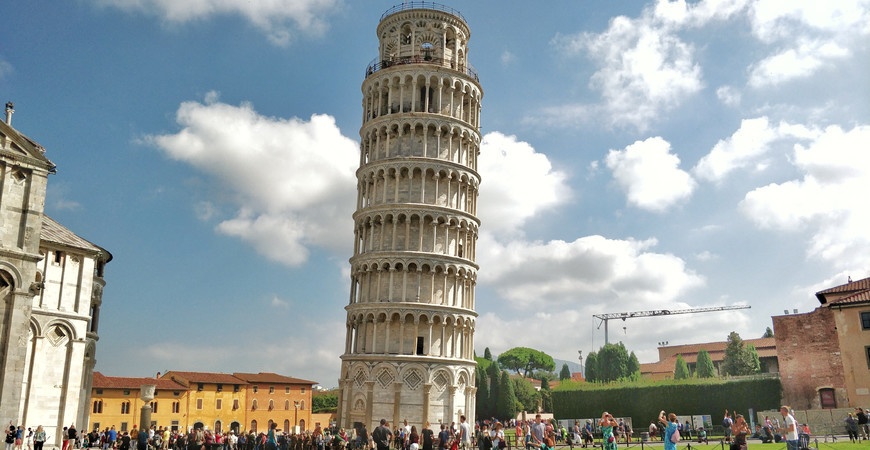 The Tower of Pisa is one of the most famous landmarks of Italy. Its popularity is due primarily to the eight-level structure, visible to the naked eye deviation from the vertical axis, as well as a unique architectural appearance. Every year thousands of tourists come to see the “falling” tower, to climb to the observation deck, which opens up stunning views of the city and the surrounding expanses, as well as to take pictures against the background of the sight.

The bell tower, or campanile, is part of an architectural and religious ensemble together with the Cathedral of Pisa – Duomo di Santa Maria Assunta, the Baptistery of San Giovanni and the monumental cemetery of Campo Santo. In 1987 the complex was included in the list of UNESCO World Heritage Sites.

Where is the Tower of Pisa

The landmark, which has become one of the symbols of Italy, is located in Piazza dei Miracoli (aka Piazza del Duomo), within the fortress walls of the historic center of Pisa. The city, in turn, is located in northeastern Tuscany, famous for its spectacular scenery, which belongs to the central regions of the country.

Unlike the traditional bell towers of Catholic churches, the Campanile is not adjacent to the Duomo, but is a separate structure.

Every tourist and traveler coming to Pisa seeks first of all to visit Piazza della Miracle to see with their own eyes the tilted tower, an image familiar to almost everyone since the school years. Many people want to make sure that this is not an illusion or a clever hoax invented to draw attention to the city, and are trying to understand why it, which has stood in this position for centuries, has not collapsed, contrary to the laws of physics, earth gravity and common sense.

By the way, the second name of Piazza del Duomo, Piazza dei Miracoli, became popular in the postwar period thanks to the ubiquitous tourists. They regarded the architectural ensemble here as a true marvel, and the tilted Campanile as its crowning jewel.

Why the Leaning Tower of Pisa is falling

There are many legends about the unique landmark of Pisa. One of them tells of the architect Pisano, who did not receive the promised remuneration for his work. Leaving the city, he called the tower after him, which tried to take a step in the direction of the master, but only bent over, and never managed to get off the ground. Everyone understands that the plot is made up and has no relation to the real events, but nevertheless, the beautiful tale has been passed from mouth to mouth for centuries.

In fact, everything looks much more prosaic. The tilt of the Leaning Tower of Pisa was caused by errors in calculations and incompetence in the analysis of soil conditions. First of all, the foundation under the foundation on the southern side was much weaker than on the northern side. The underground structure itself was sunk only three meters, and this despite the fact that the height of the bell tower is almost 60 meters.

The first vertical deflections of the tower appeared after the construction of the third floor. Instead of finding a solution to strengthen the foundation, construction was suspended indefinitely. Later on they tried to level the belfry in different ways, including by increasing the height of the storeys on the banked side. But all the innovations turned out to be futile – the campanile kept climbing upwards and kept leaning down. The eighth floor, added later, is located at a small angle to the axis of the building, but it is flatter to the ground level.

At the end of the last century, the tower was straightened. Extensive work was carried out to strengthen the foundation and excavations were made to shrink the structure from the opposite side to the direction of fall. Activities to correct the axis of the bell tower continued in the XXI century. The state of the landmark is under constant control.

Despite the positive results of stabilizing the spatial position of the Campanile Duomo, scientists fear that it may collapse due to seismic activity.

The slope of the Leaning Tower of Pisa is unstable. In recent decades, it has fluctuated between 4.2 and 5.5 and 3.9 degrees. There is an opinion that the effect of the fall could have been planned originally, but no confirmation has been found.

The Tower of Pisa today

The unique landmark has several names – Torre di Pisa, Torre Pendente (tilted), Campanile Duomo di Santa Maria Assunta, etc. But in the Russian-speaking world it is known as the Tower of Pisa.

The façade of the first floor of the eight-tiered structure of white marble is decorated with arcature – a decorative belt of false arches with columns, as well as stucco and carved elements. All other floors are surrounded by covered galleries that give an openwork effect to the facade. The arcades are supported by columns with Romanesque capitals.

The upper annex contains 7 bells. The biggest one is the 2.6-ton Assunta, the smallest is Vespruccio (120 kg) and the oldest is Pascuereccia (1262). In the Middle Ages each bell sounded at a certain time, alerting the townspeople to a particular event.

The tower is hollow inside with a diameter of about 15 meters on the outer walls and about 7 meters on the inner ones. On the first floor level there is the Fish Hall, which gets its name from the wall bas-relief in the shape of a fish. The entrance is on the west side. There are 3 spiral staircases leading to the top – from the 1st floor to the 6th floor with an exit to the outer gallery, from the 6th floor to the 7th floor, and the smallest one – to the upper level.

People who suffer from cardiovascular and mental diseases, to climb the Leaning Tower of Pisa is not recommended.

The Campanile was the third monumental structure in the Piazza dei Marmi, after the Duomo and the Baptistery. Its construction began in 1173, was carried out in three stages and was completed almost 180 years later. Some scholars attribute the project to Diotisalvi, the first architect of the nearby Baptistery. Others argue that the work may belong to Gerardi. However, according to Giorgio Vasari, author of the monumental work on famous painters, sculptors and architects, the construction of the Tower of Pisa was started by Bonanno Pisano. This was confirmed by the discovery in the nineteenth century of a grave near the bell tower with the inscription on the tombstone “citizen of Pisa Bonanno”.

The first investment in the construction of the campanile was the sum of 60 soledos bequeathed by Signora Berta di Bernardo. The sum was received in January 1172.

The first phase of the tower was completed in 1178, following the discovery of subsidence under the three-story structure. Full-scale work resumed under the direction of Giovanni di Simone and Giovanni Pisano in 1272-75. In the second phase, the bell tower grew another three levels, getting an artificial bend in the opposite direction from the slope. This time construction had to stop due to the defeat of Pisa by Genoa in the naval battle of Meloria (1284). This event was the beginning of the end of the military and commercial ambitions of the Republic of Pisa.

In the first half of the 14th century the 7th floor was built, and by 1371 an extension for the bells, which became the 8th level of the tower, was erected. It is assumed that the last architect of the campanile was the son of the famous Italian master Andrea Pisano – Tomasso. He is credited with the successful combination of the Romanesque style of the lower part of the structure with the Gothic style of its top.

Claims that Galileo Galilei conducted public experiments on dropping objects of different masses from the Leaning Tower of Pisa were questioned in the last century. Researchers have noticed the absence in Galileo’s books of references to this event, described by his pupil and biographer Vincenzo Viviani.

Serious restoration work aimed at stabilizing the position of the tower began in the XIX century. At that time they tried to pump out groundwater and extract a small amount of soil from under the underside. The result was opposite: the structure sagged and its roll increased. In the 90s of last century, the threat of collapse of the bell tower became real, so they had to close access to it for tourists and to carry out unique work to stop the progression of the slope. The unique design and the latest technology allowed to stabilize the position and even reduce the tilt.

On October 15, 2001, the Leaning Tower of Pisa reopened to the public once again. In 2008 it was announced to stop its further decline. Until then, the deviation continued to increase by 1 mm per year. At the end of 2018, experts reported that the tilt of the bell tower began to decrease.

The Leaning Tower of Pisa is open daily:

Admission ceases 30 minutes before the closure of the attractions.

In special cases – in bad weather, for reasons of public order, for security reasons, during ceremonies and public events – admission may be restricted without prior notice.

The cost of a visit is 20 euros per person. It is recommended to buy tickets online on the official website, as if there are no seats available you will not be able to climb the tower. The sale begins no earlier than 20 days before the visit. You should choose not only the date, but also a specific time, as the number of people in the tower at the same time is strictly regulated.

READ
Sao Tome and Principe: where is it, when to go, what to see

You can book tours of Italy, including a tour of the Leaning Tower of Pisa, in the nearest travel agency, while already on site. But it is better to choose in advance a Russian-speaking guide with the service “Experts. Tourister. Ru” service.

How to get to the Tower of Pisa

From Pisa’s Galileo Galilei airport along Piazza dei Miracoli take buses E3 and E25. Get off at the “Torre 1” stop, then head towards Porta Santa Maria Pisa.

The nearest bus stop from the Tower of Pisa is “Via Contessa Matilde, 62” on the north-eastern side of Piazza della Wonderland, opposite Porta San Ranierino. It can be reached by buses 21, E3 and the Navetta E shuttle from Pisa train station – Stazione Pisa Centrale.

Porta San Ranierino leads to the street of the same name. The Tower of Pisa is just a few tens of meters to the right, where you must turn off.

To order a cab you can use mobile applications It Taxi and eTaxi.