Valley of the Temples in Sicily

One of the most famous attractions of the island of Sicily and all of Italy, which is very popular with tourists is the Valley of the Temples.

This outstanding monument of ancient architecture was included by UNESCO in the list of world cultural heritage sites. This significant discovery was made by the Italian archaeologist Domenico Antonio Lofaso Pietrasanta at the end of the XIX century. The site was originally a large Greek city, Akragas, founded in 581 B.C. by settlers from the island of Rhodes, but it reached its peak under the tyrant Falere and became the center of economic life in Sicily. The city was situated in a very advantageous position and was therefore attractive to other nations. During the Carthaginian attack in 406 BC, the city was badly damaged and was under the yoke of Carthage for another 20 years until the inhabitants, with the help of Corinth, drove the invaders out. In 210 AD, Akragas was occupied by Roman soldiers and renamed Agrigentum, but in the seventh century, the Romans were forced to leave the city because of the threat of invasion by Arab tribes, they moved to the hilltop nearby, here is now the modern city of Agrigento.

On the site of the once mighty city of Akragas, there remains the Valley of the Temples of the ancient Greek gods, most of which date back to the V-VI centuries BC. There are temples of Zeus, Hercules, Hera, Vulcan, Asclepius, and other gods.

This temple is dedicated to the ancient Greek hero Hercules or Hercules and is considered to be the oldest in the Valley of the Temples. There used to be 38 columns supporting the vault of the temple, but now only 8 of them remain. Hercules, a half-man, half-god, son of Zeus who ascended to Olympus after his death, was one of the most venerated gods in Agragas.

The ruins of the temple of Hera or Juno, the supreme goddess of Greek mythology, are near the wall that protects the city and the temple. The temple has survived a lot – first a fire in 405 BC, then, in the Middle Ages it was destroyed by an earthquake.

The temple of Zeus, the most important among the Greek gods is situated in the western part of the Valley of the Temples. Construction of this temple was timed to coincide with the anniversary of the victory over Carthage in 480 BC, but it was never completed. Today, the remains of the statues of the mighty Atlanteans can be seen on the site of the temple.

The temple of Concordia or Concordia is the best preserved of all, and it is believed that this was due to the fact that in the VI century there was opened a Christian church. Locals who converted to Christianity protected the former temple from destruction. After the church was partially demolished in 1748, the arches, visible through the holes in the roof, remained.

The Temple of Vulcan or Hephaestus was built in the 5th century BC. Archaeologists believe that it is one of the oldest buildings in the Valley of the Temples, after the Temple of Hercules. Unfortunately now it is also the most poorly preserved building.

In the Valley of the Temples is the Archaeological Museum, which contains artifacts found during excavations. The most famous exhibit is a statue of the titan Atlantean, 8 meters high, which was found on the site of the Temple of Zeus, as well as a rich collection of ancient ceramics.

Tourists can visit the Valley of the Temples during a trip to Agrigento, Sicily. 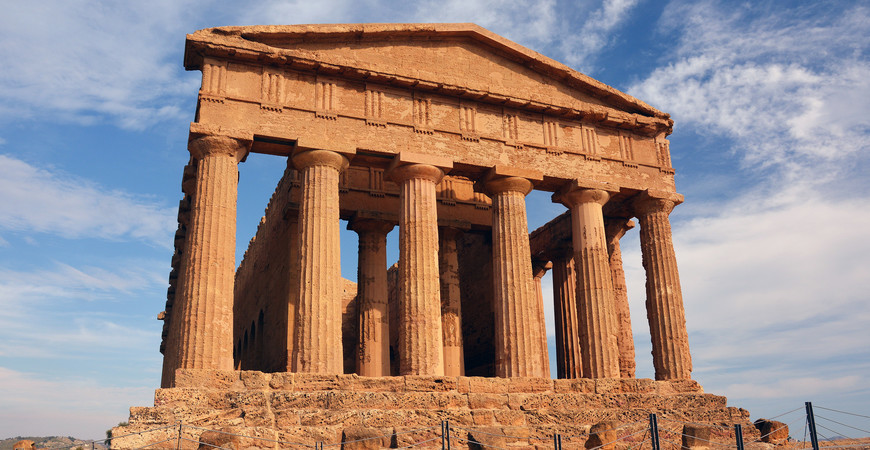 In Italy churches are practically at every turn, but the complex near Agrigento is unlike anything else. The Sicilian city is world famous for its V-VI century BC ruins. The Valley of the Temples is the center of the remains of religious buildings of that time. Since 1997, this complex is a UNESCO World Heritage Site. If the beach in Sicily is not all you’re interested in, be sure to go see the ruins.

READ
Las Lajas Church: a brief description of Colombia's wonder of the world

Over 1300 hectares of land are occupied by temple buildings, left over from the time of the Greek settlers. In the 6th century BC the natives of the area founded a colony in what is now the valley, called Akragas, and it soon became one of the largest Greek settlements of the time. In the 6th century BC the city was surrounded by a strong fortress wall with nine gates. By the 5th century BC, Akragas had reached its heyday. Two centuries later the territory was conquered by the Carthaginians, and the area fell into decline. The second life was given to the city by the Romans, who renamed it Agrigent.

All the temples, tombs, and plazas in the Valley are witnesses to the turbulent history of the region. Archaeological excavations have unearthed the remains of a dozen temples and three sanctuaries as well as countless tombs, the remains of fortification systems, market squares that served as meeting places and the city council building.

The oldest temple of the complex the Temple of Hercules was built around 510 BC. Scientists have been able to establish that the building was restored during the Roman Empire, but it was later destroyed again. In the 1920s, an expedition by archaeologist Alexander Hardcastle raised eight of the temple’s columns (out of 36).

Built in honor of the victory over Carthage, the Olympeion (Temple of Zeus the Olympic) was to be the largest Doric temple in the world. Its area was more than 6,000 square meters, and the height of the columns ranged from 14.5 to 19.2 meters. There were Atlantean figures along the entire perimeter. Only one has survived, its original is on display in the Regional Archaeological Museum, here, and at the foot of the temple lies a modern copy.

Panorama of the Valley of the Temples complex on Google Maps

The best preserved temple of Concordia (or Concordia). It was built in the middle of V century BC, and since the end of VI century until the XVIII century, the building belonged to the Christian Church of Peter and Paul. The temple of Juno (Hera Lacinia), of which only a part of the colonnade has survived, is also noteworthy. The rest of the building was damaged in a fire that took place 50 years after its creation (400 B.C.).

The temple of Castor and Pollux is a symbol of the city of Agrigento, although only four columns remain. The heroes, whose name is given to the temple, were the ancient patrons of warriors and sailors, so they were highly revered in the city. The temple of Vulcan was built in the V century BC. Archaeologists suggest that it was the largest in the entire valley, but it is impossible to confirm this with certainty. Today it is the most destroyed.

Excavations in the Valley of the Temples continue today. In particular, the restoration of the Temple of Asclepius of the V century BC is still underway. Archaeologists have found that the building was attached a hospital or inn for 28 people. The first option is more likely to be true, because the figures were found near the shrine, which the ancients presented as a gift to the god-healer.

In addition to the many temples in the park you can see the sanctuary of Demeter and Persephone, the area of the agora, where all the social life of the settlement was concentrated, the Hall of Council and Imnasium, a place of recreation, education and sports.

When going to the Valley of the Temples, make sure you have comfortable shoes for long walks. If you are traveling in the summer, be sure to bring hats and sunglasses. Make sure you get drinking water, as it is only available at the park entrance.