Castle Malbork – Marienburg: the largest brick castle in the world

Malbork Castle is one of the many castles built by the German Knights of the Teutonic Order. It is a historical monument and a masterpiece of Gothic defensive architecture. 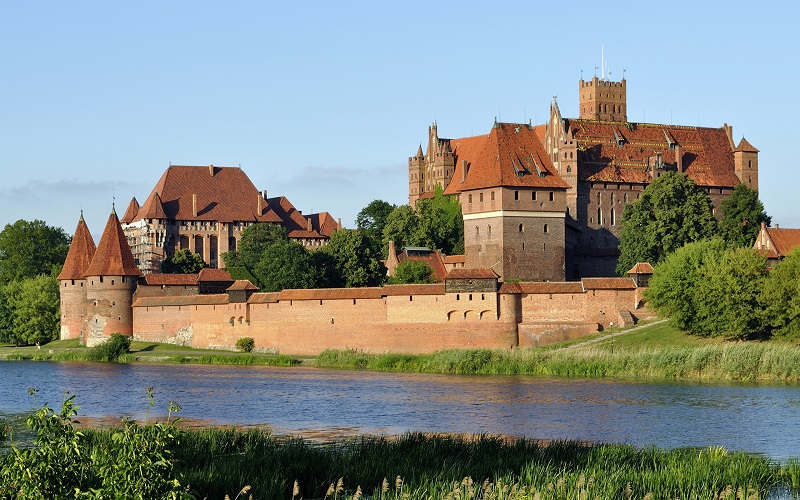 View of Malbork from the south-west

Over its centuries-long history it has undergone several major restorations, the largest of which was after World War II. Today Malbork has been fully restored and is one of the most popular tourist destinations in Poland and one of the largest castles in the world. It is on the list of UNESCO World Heritage Sites.

The castle will be of interest mainly to fans and connoisseurs of the medieval era. Inside the castle is a museum with an interesting collection.

A few facts about Malbork Castle 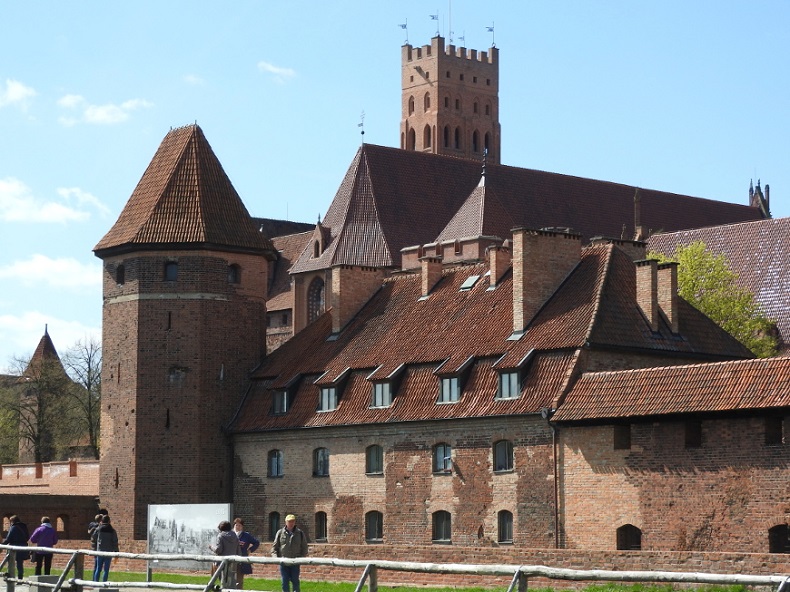 Ticket price: 47 PLN in summer, 45 PLN in winter. Audioguides with GPS (in major world languages, including Russian) are included in the ticket price. Children under 7 years old free of charge. On Mondays – 8 zlotys.

Malbork Castle Museum offers a viewing area and a huge number of buildings and rooms, on the tour of which it will take several hours. Gothic castle includes three castles: Lower, Middle and Upper. For those who want to climb the tower you must buy an additional ticket for 8 PLN.

Museum of the castle offers many exhibitions, the most interesting of them: a collection of weapons and armor, ceramics and amber. In the museum you can see ancient tapestries, stained glass, coins, gravestones, paintings, sculptures and much more.

There are souvenir stores in the castle where you can buy magnets, books and posters with the castle. You can eat at the Gothic Café and Restaurant. The museum also offers guided tours of the castle at night in historical costume. Since 2000, an annual festival of medieval culture of Europe “Siege of Malbork” is held in the castle, where you can watch the knightly duels and equestrian shows. 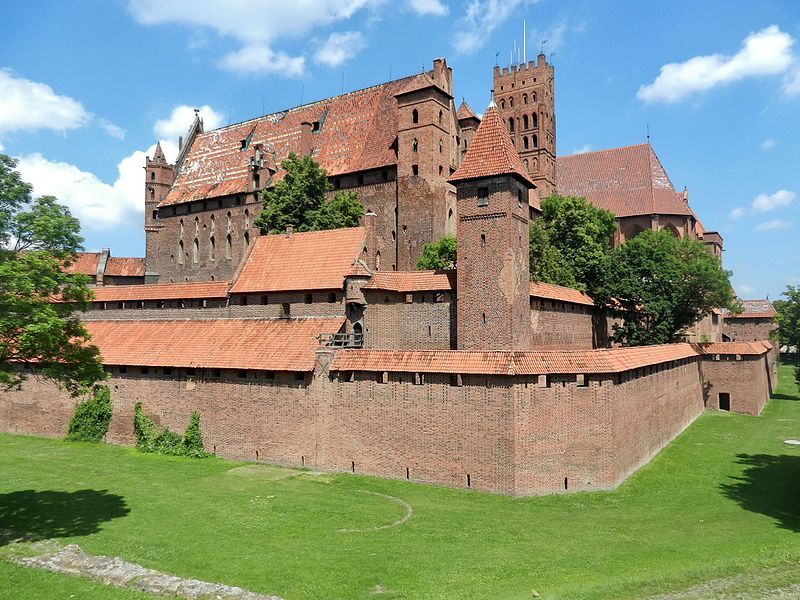 The history of Malbork is a magical tale with a happy ending. Despite the venerable age of more than 8 centuries, wars and social upheavals the castle has managed to revive from the ruins and become a center of attraction for tourists from all over the world.

The fate of the Teutonic castles in the Kaliningrad region is much sadder – they are increasingly destroyed by time and lack of repair. The most significant of them – the Royal Castle – managed to survive British bombing and the storming of Koenigsberg in 1945, although it was badly damaged by fire. In 1967 it was blown up by the Soviets as a relic of the past and an echo of enemy German culture.

Grandmasters of the Teutonic Order, The Middle Castle, Malbork

The Castle-Monastery of Marienburg in honor of the Virgin Mary was founded in 1274 by the largest monastic knightly order, the Teutonic Order (also often referred to as the German Order). The Teutons began their crusade against the Prussians in 1230. Under the pretext of converting the Prussian tribes to Christianity, they seized their lands, erected castles on them, around which German cities were formed. Colonization of the Prussians gradually led to the destruction of culture, language, and the Prussian nation itself. 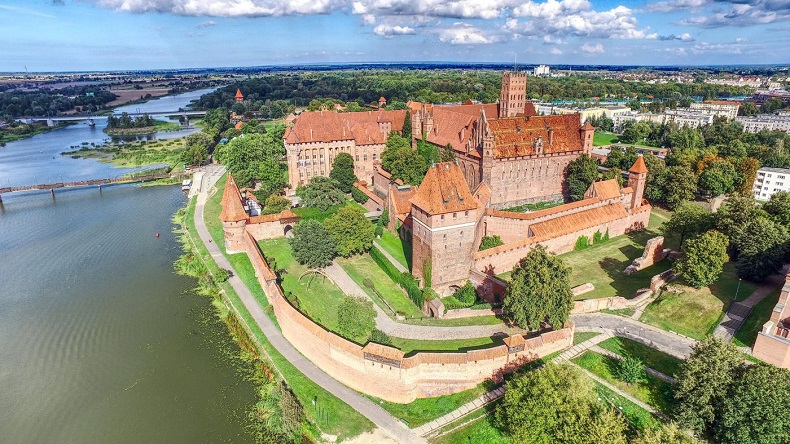 The Grand Master of the Order Siegfried von Feuchtwangen moved his residence from Venice to Marienburg in 1309. Thus the capital of the Teutonic Order was established in Marienburg. Over the next few decades the Castle and defensive walls with moats were erected which greatly increased the size of the castle area. A mosaic statue of Our Lady with the Child, 8 meters high, was brought from Venice. The Middle Castle with the Great Refectory was also built. A small modest fortress turned into a powerful citadel. In 1410 the Battle of Grunwald took place, which was the greatest battle of the Middle Ages, fought between the Teutonians on one side and Poland and Lithuania on the other. The Teutons were crushingly defeated, after which the victors marched to Marienburg, the capital of the Teutonic state. The siege of the castle lasted two months, but the Polish-Lithuanian army never dared to storm it and the siege was lifted. 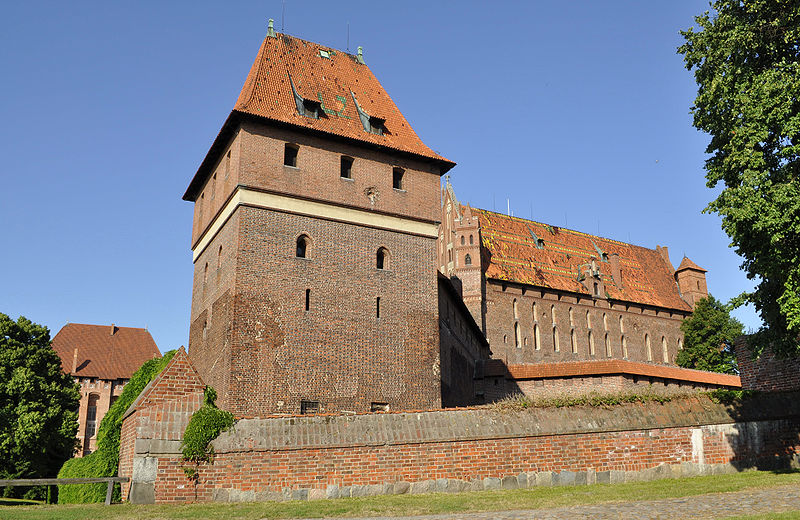 The final defeat for the Teutonians came at the end of the Thirteen Years’ War (1554-1466). It resulted in Poland gaining possession of some Teutonic lands and access to the Baltic Sea, and the Teutonic Order became a vassal of Poland. As for Marienburg, it had to endure a long siege again. The Grand Master moved to Königsberg – it was here that the capital of the Teutonic Order was moved. In 1457 the mercenaries who guarded the castle, to whom the Teutonians owed their services, sold Marienburg to the Polish king Casimir IV. Polish troops with the king triumphantly entered the castle.

The Kingdom of Poland – Rzeczpospolita 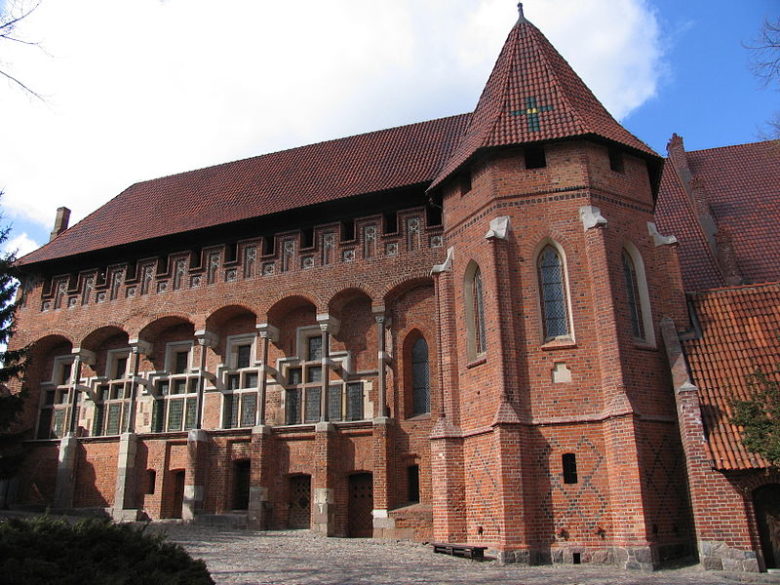 Palace of the Grandmasters

Marienburg became Malbork and from 1466 to 1772 was the capital of the Malbork Province of the Rzeczpospolita (Polish Kingdom). The Palace of the Grand Masters became one of the royal residences. On July 17, 1626 the castle was seized again, this time by the Swedes, the Polish-Swedish war was going on. In 1635 there was a truce and Malbork again became Polish.

READ
9 things to do in Aberdeen, UK

In 1772 the first partition of the Rzeczpospolita took place and Malbork became part of West Prussia.

After Malbork became part of West Prussia a large-scale reconstruction of the castle and the demolition of historic buildings began. The High Castle was turned into a barracks, a riding hall was organized in the Great Refectory, and a cotton mill and weaving apartments were opened in the Grandmaster’s Palace. The castle, a monument to the monastic state of the Teutonic Order, was rapidly falling into decay.

The greatest destruction took place in 1801-1804, when the medieval vaults were torn down, new floors were built, the facades were plastered, and Gothic windows were bricked up and new ones carved. In 1803 the Romantic poet Maximilian Schenkendorf, a student of Königsberg University, published an article in a newspaper where he protested against the destruction of the castle. This caused a wide public response and was a new milestone in the fate of Malbork, the demolition of the medieval monument was halted. 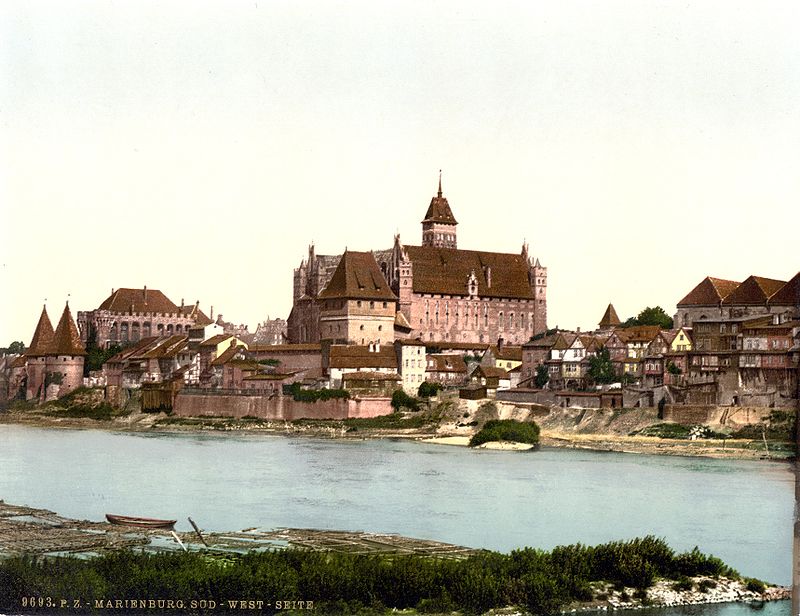 In 1816 began the era of the Great Reconstruction, which lasted until the 1930s. It resulted not only in the restoration of the castle’s historical appearance, but also in the placement of unique objects of culture and art. The reconstruction was of national importance, Emperor Wilhelm II visited the castle more than 30 times. The greatest contribution to the reconstruction of the castle was made by the German architect Konrad Steinbrecht (1849-1923), he is called the “savior of Marienburg”. 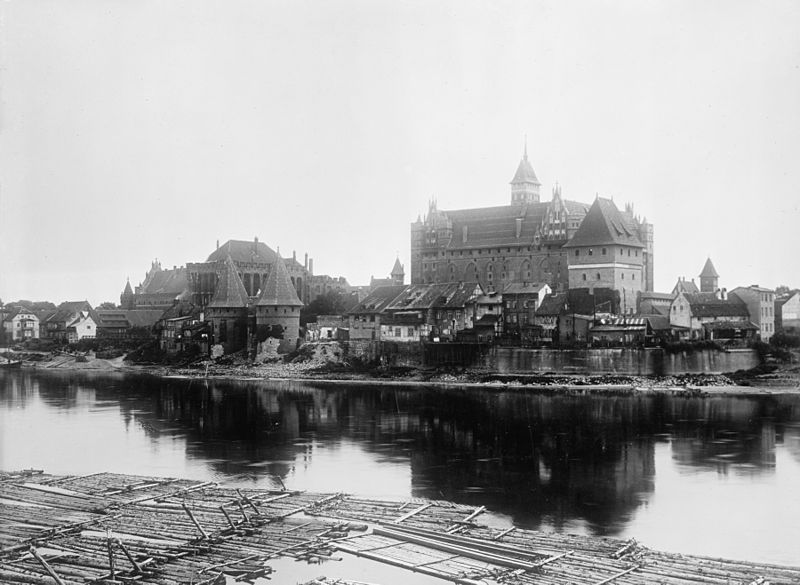 In the 1930s, Malbork Castle was often used for Nazi meetings, celebrations, and parades. Famous figures and officers of Nazism often came here. In 1937, it became the “German Youth Castle”.

READ
10 free things to do in Florence, Italy

In 1945, during the offensive of the 2nd Shock Army of the 2nd Belorussian Front of the Red Army, the German troops used the castle as a shelter. For two months the castle had been under siege and bombarded with heavy artillery. As a result, the castle was severely destroyed, especially its eastern side. Retreating German troops blew up bridges on the Nogat River.

After the end of World War II one part of the territory of East Prussia (former West Prussia) went back to Poland, and the other part went to the USSR (Kaliningrad Oblast). Marienburg-Malbork became Polish again. The city of Malbork was destroyed by 80%, the castle by 50-60%.

Ruins of Castle Marienburg in 1945

The ruins of the Old Town of Malbork were dismantled into bricks and taken to Warsaw for its restoration. Only the church, the town hall, the city gates and fragments of defensive walls remained of the medieval part of the city. The deployment of the Polish army saved the castle from plundering, and the Museum of the Polish Army was created there. The castle was cleared of rubble and the roof was repaired.

The restored Malbork in 2016. Traces of destruction can easily be seen by the bricks of a different color

We have to hand it to Poland, in the name of history, it still decided to restore the German castle, despite the enormous destruction. In 1950, the castle was transferred to the Ministry of Culture and Art, and in 1961 it was opened in the Historical and Art Museum. Restoration work began, which lasted until 2016. In 1965, an exhibition of amber was opened here, which aroused great interest. In 1997 the castle was included by UNESCO in the list of World Heritage Sites. 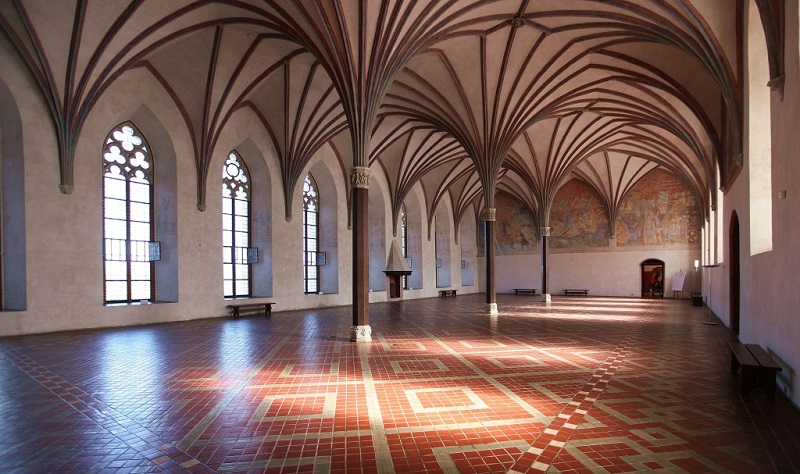 The most impressive and spectacular hall in Malbork is the Great Refectory of the Middle Castle – medieval knights’ feasts were held here. The huge palm vaults of the castle are supported by three columns. 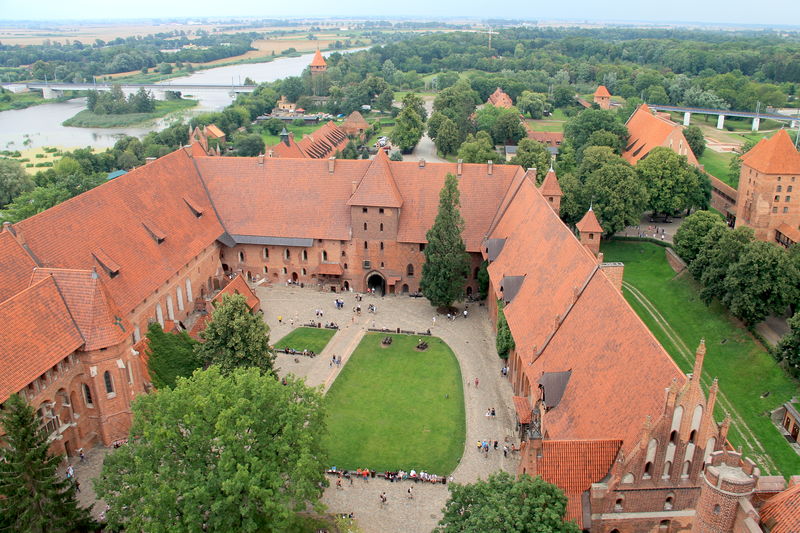 View from the Tower of Malbork

Climb the narrow spiral staircase to the High Tower and see the castle from above. 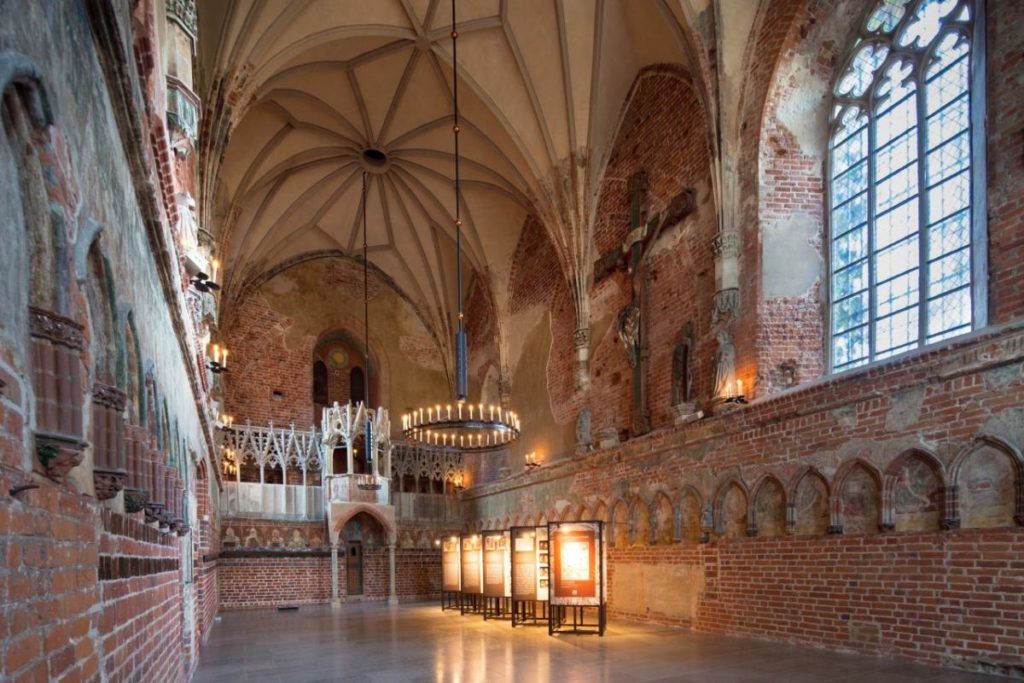 The Church of St. Mary is in the High Castle, built in 1344 on the site of the monastery chapel. A polygonal choir was built, the outer facade of which housed an eight-meter statue of the Madonna and Child. It was called the Colossus of Malbork for its enormous size. For many centuries Madonna adorned the castle and became its symbol, until in 1945 the church with the tower and the statue collapsed due to shelling. 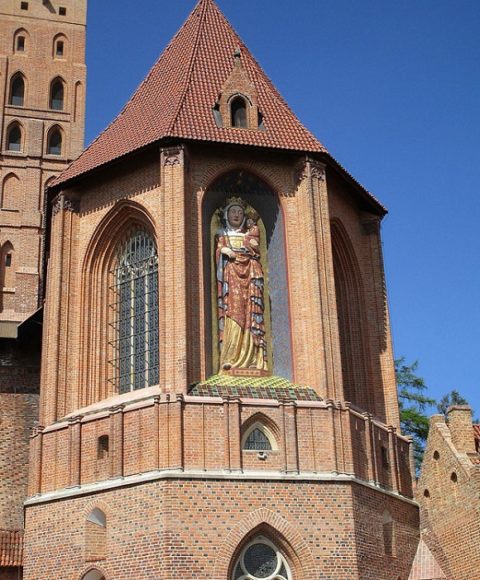 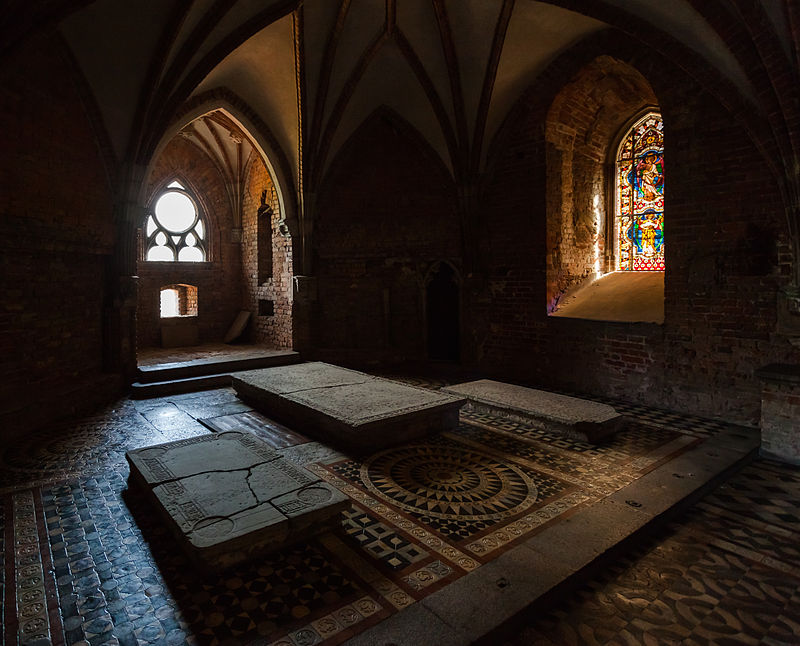 Tombstones in the Chapel of St. Anne

Beneath the church is the Chapel of Anne, which functioned as a crypt, serving as the burial place for Grandmasters.