What to see in Paris: Top 25 attractions 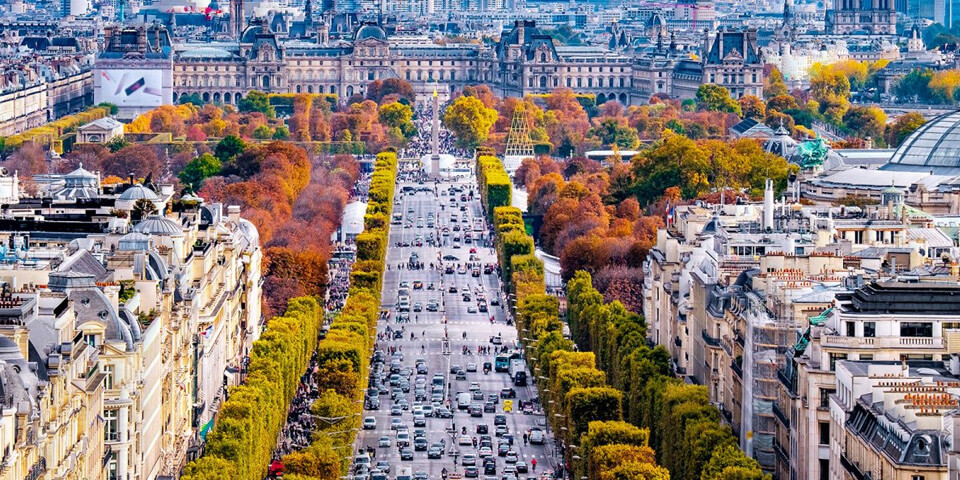 France has been the leader in the number of tourists for several years. In 2017, 83.7 million people visited this country, and 30 million of them came to Paris. This city attracts not only romantics, but also those who are interested in the rich history of this country.

Paris has a lot of attractions that must be visited. Of course in a couple of days or even a week is difficult to walk around all the memorable places. But in this selection gathered the most interesting sights of the capital of France, which should have time to visit during the trip! 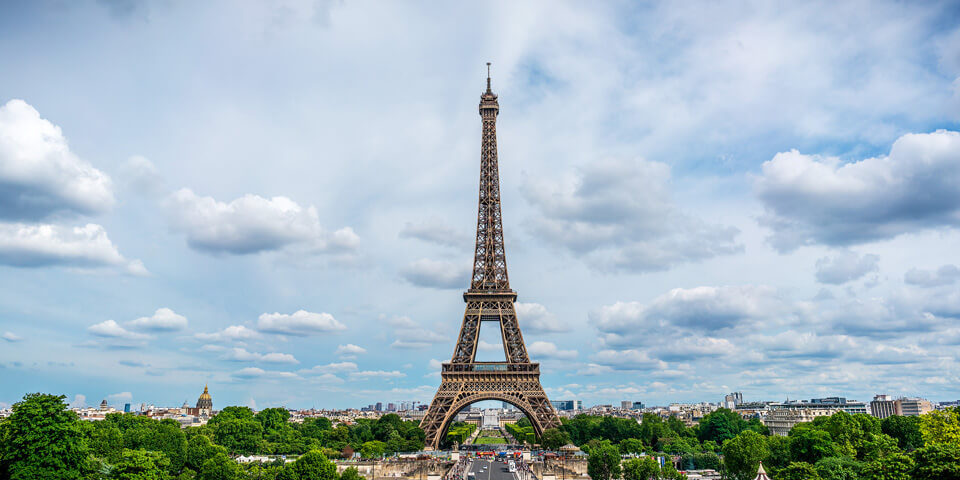 The symbol of Paris is undoubtedly the Eiffel Tower. This 300-meter structure was named after the designer, Gustave Eiffel. Interestingly enough, the tower was originally built temporarily as an entrance arch to the World’s Fair in 1889. Now Eiffel’s creation is the most photographed landmark in the world. The tower is designed for tourists, you can even take an elevator to the top and see Paris! 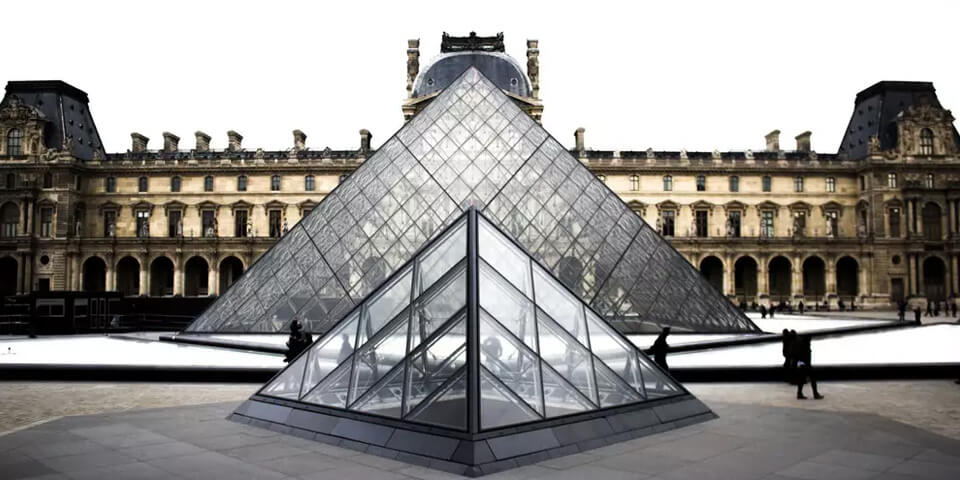 Another jewel of Paris, the famous Louvre Museum. More than 9 million people visited it in 2014 alone, making it the most popular museum in the world. No wonder, because it is located in an ancient royal palace and can amaze not only the history of France from and to, but also the history of the whole world. Unique artifacts from antiquity to the 19th century are spread over 100,000 square meters. 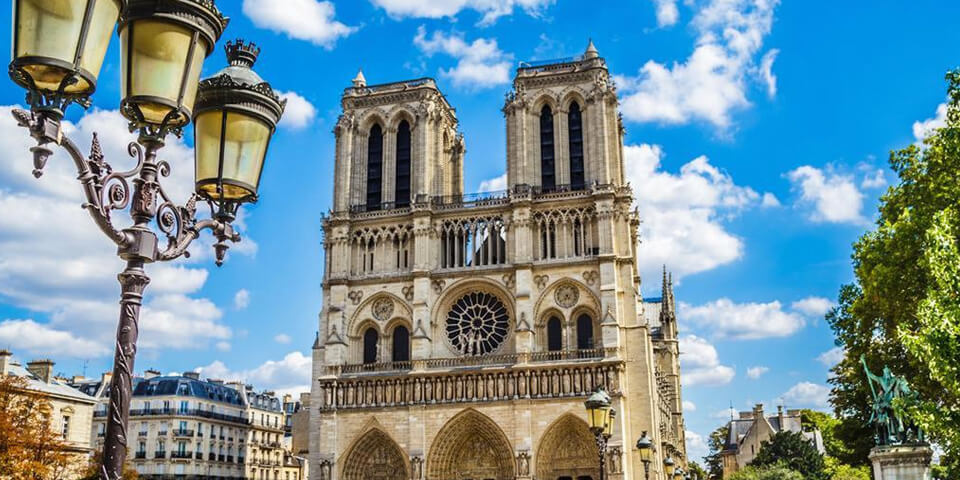 Notre Dame de Paris is another of the city’s indispensable symbols. It is a true classic of Gothic architecture with a rich history and legend. Everyone has heard about the famous novel by Victor Hugo, right? The cathedral was built almost two centuries, from 1163 to 1345, and before that there were four Christian shrines in its place. Now the landmark is a symbol of Paris and one of the most iconic Catholic churches. 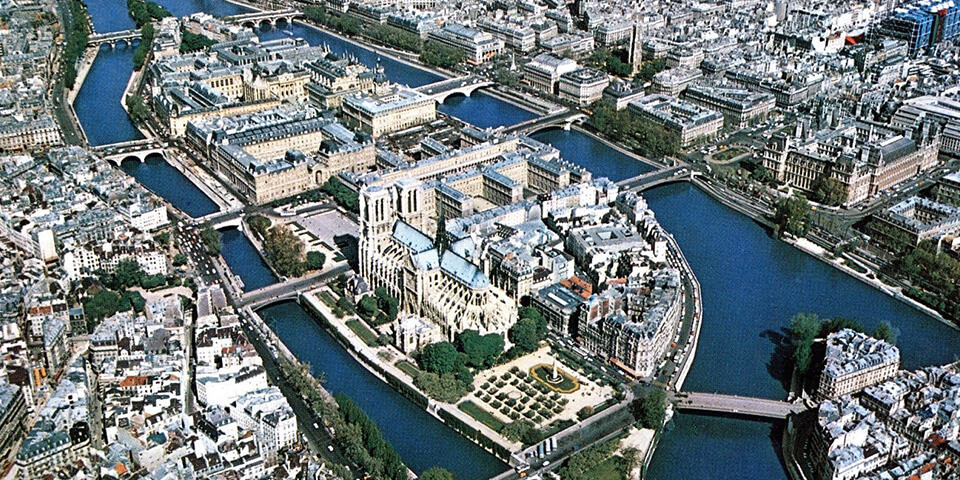 In the middle of the River Seine, on which Paris is located, two islets have survived to this day. One of them, Cité, is the oldest part of the city. It was inhabited in the I century BC, so all the important buildings of Paris were built here. Yes, it is the location of St. Chapel, the Cathedral of Notre Dame, the Conciergerie and many other historical sites of the city. A walk around the island of Cité will be unforgettable! 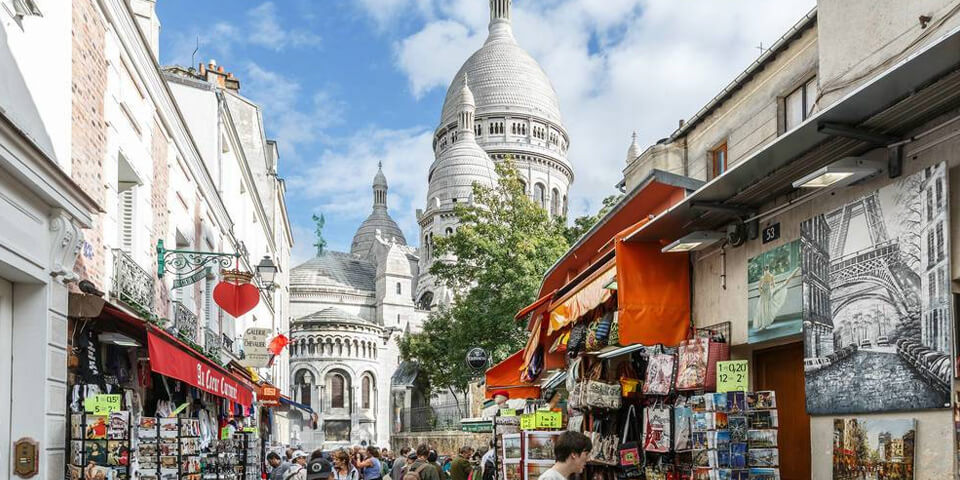 While in Paris is necessary to ascend the highest point of the city – the hill of Montmartre. Its height is 130 meters and it was inhabited already in the heyday of the Roman Empire. On the hill there were temples in honor of Mars and Mercury, here was beheaded the first bishop of Paris for the promotion of Christianity. And now on the hill is the Basilica of the Sacré Coeur. But it can only be reached by taking the famous Montmartre stairs!

6 The Palace of Versailles 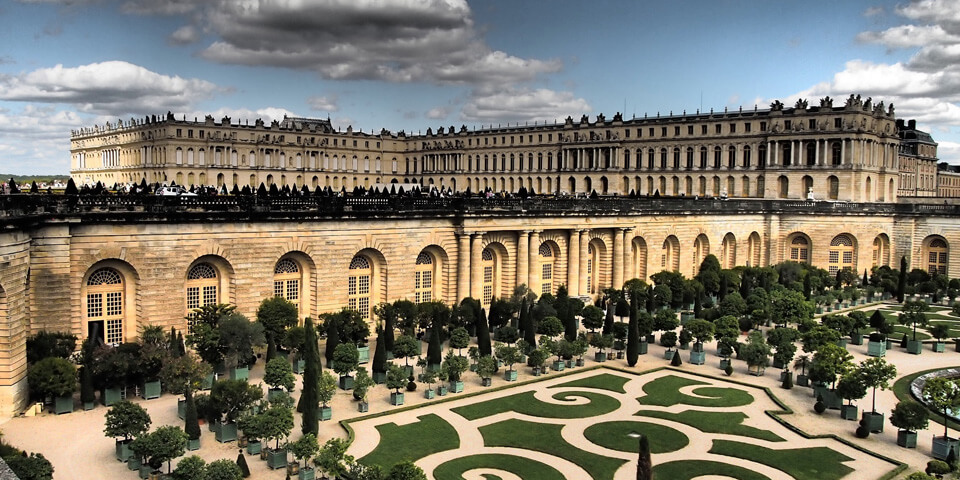 It’s hard to believe that this majestic palace was a hunting lodge. In 1661, with the easy hand of Louis XIV, the royal palace was moved here. The residence of French kings became a museum only after the Great French Revolution. On this territory there is not only the classic creation of the Sun King – a palace, but also a huge park. It is one of the largest and most recognizable in Europe. 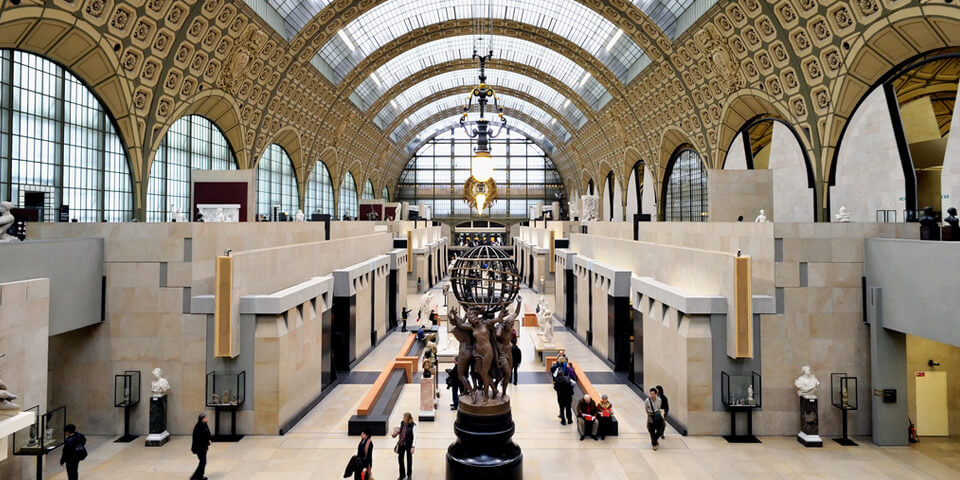 While the Louvre has a huge collection of exhibits before 1850, the Musée d’Orsay highlights the period from 1850 to 1910. This third most popular museum displays masterpieces of Impressionism and Post-Impressionism. There are not only paintings, but also photography, furniture, sculpture, music and other areas of creativity. The museum also often hosts plays and concerts. 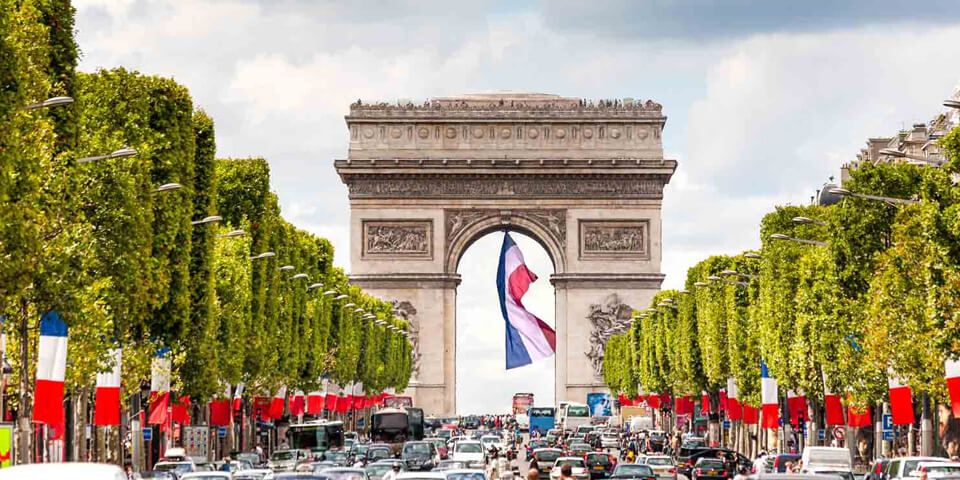 This outstanding monument on Place Charles de Gaulle was under construction for more than 30 years. Napoleon had it built to honor his future victories. We know the history of the conqueror, but the Arc de Triomphe is still standing. Its imposing size attracts tourists who want to see architect Jean Chalgren’s masterpiece with their own eyes. 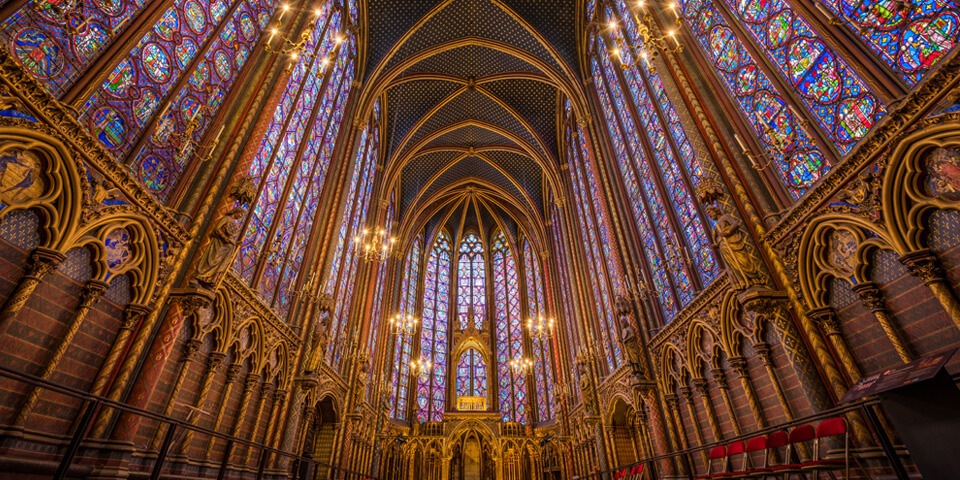 This Gothic chapel appeals to all lovers of the architecture of this period. It was built by order of King Louis the Saint in the 13th century. Among the smaller churches, it is considered the most beautiful, and for good reason. In the chapel there is the most complete collection of stained glass art of that century. Tourists are advised to visit the chapel on a sunny day, then you can appreciate all the beauty of the stained glass windows! 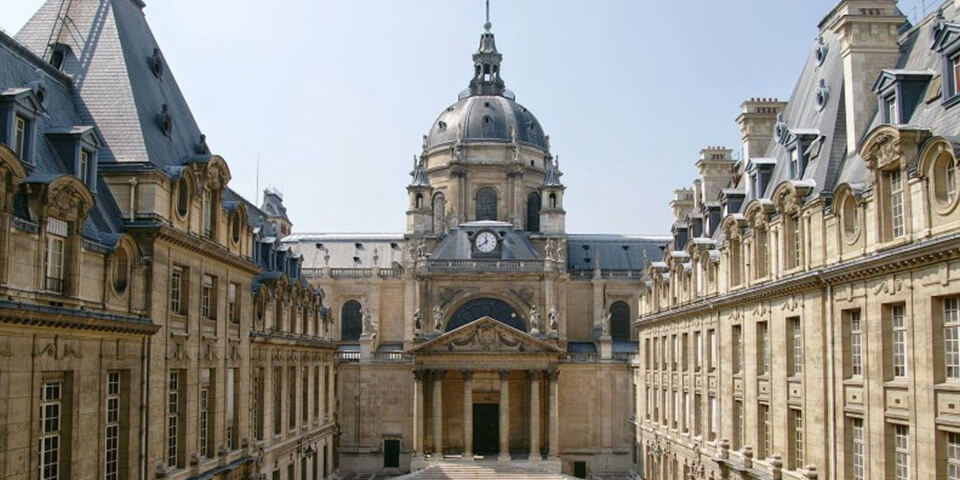 Sorbonne University is famous all over the world – it is one of the oldest educational institutions in Europe, and all over the world. But for architecture lovers the name Sorbonne has a different meaning. This is the name of the center of the University of Paris, its heart. This building is a historical monument and its facade belongs to the Sorbonne church. The Sorbonne now houses the rectorate of the Paris Academy and the interuniversity library.

11 Basilica of the Sacré Coeur. 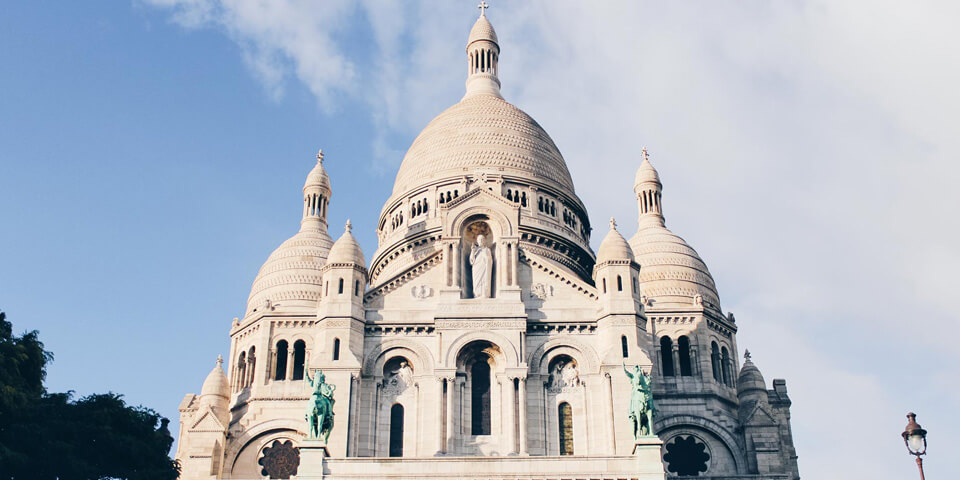 The name of this temple literally translates as “Basilica of the Sacred Heart,” or Heart of Christ. The Sacré Coeur was built in the late 19th and early 20th centuries on top of the Montmartre Hill. Since the basilica is located at the highest point of the city, from its top you can see an incredibly beautiful panorama of Paris. 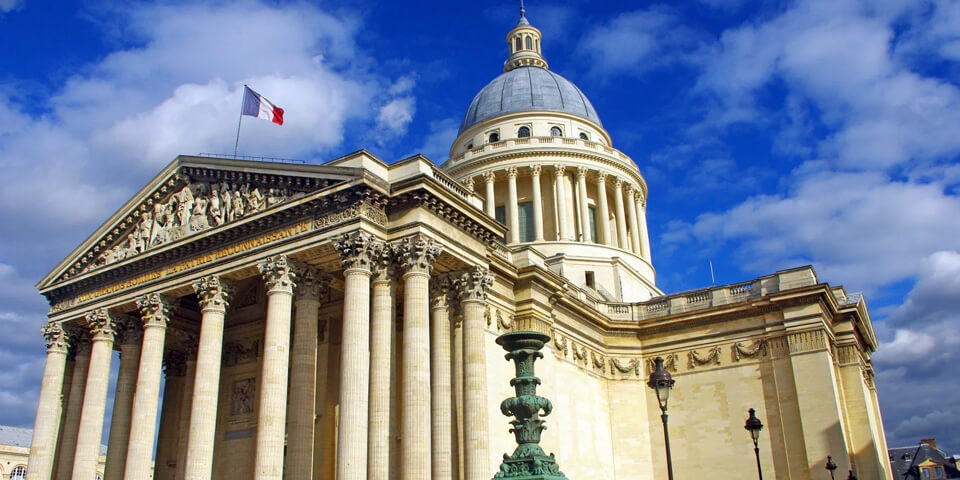 This temple was built on the site of the church of Saint Genevieve, which was held in great esteem by the faithful. The architect J. Sufflot was inspired in the construction by the Roman Pantheon, the temple of all the gods. This temple is now the resting place of France’s greatest men, such as Voltaire, Victor Hugo, Emile Zola and other figures. 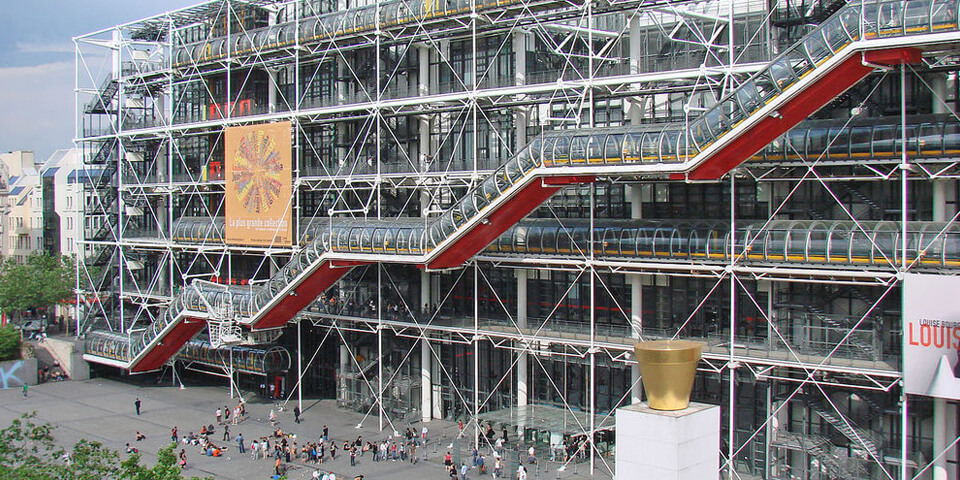 Unlike the Louvre and the Musée d’Orsay, this center is home to a collection of contemporary art. Not only do they study and collect 20th and 21st century masterpieces, but they also support emerging and developing artists. The building opened in 1977 and has since become a rather popular structure in Paris.

READ
Nigeria. The country is one of the largest oil exporters in the world 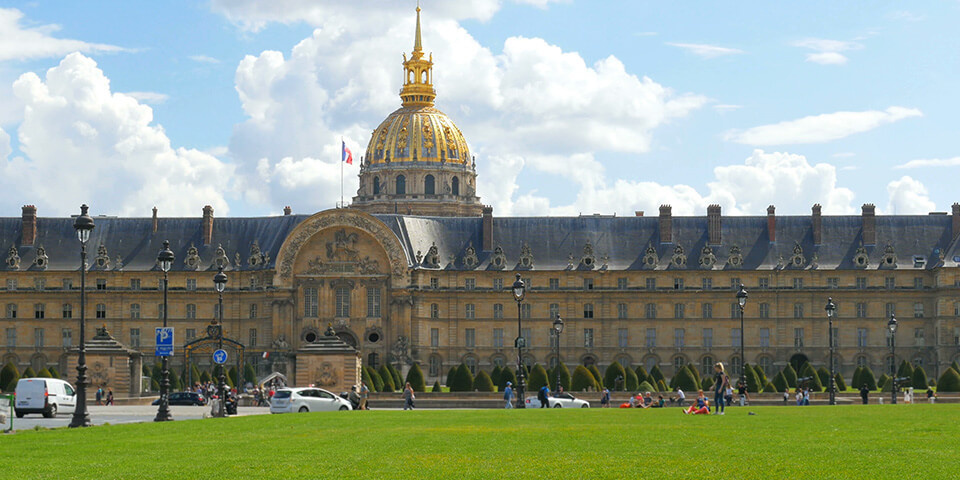 This palace has this name thanks to King Louis XIV. In 1670, he ordered the construction of a building for deserving disabled war veterans. This palace became the first house in Europe for the disabled. Now it is still home to the disabled, and there are also museums and the tomb of Napoleon Bonaparte himself. 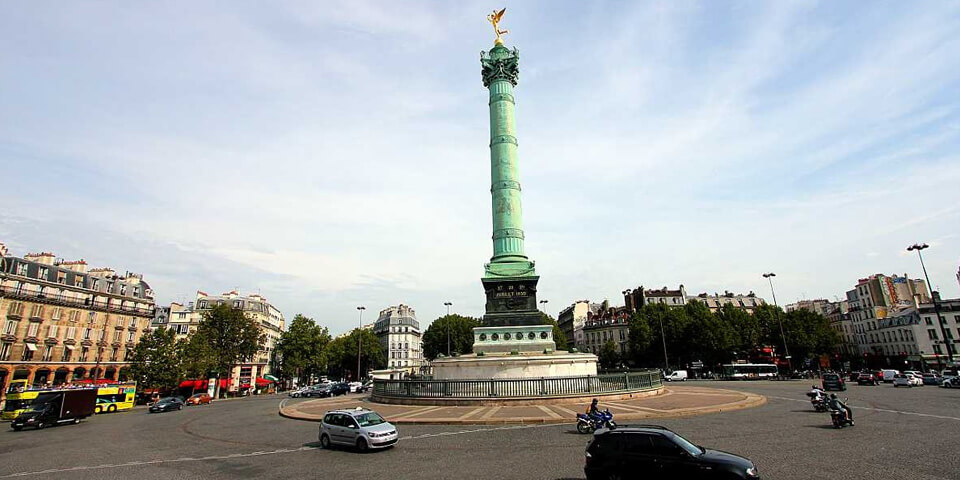 Bastille Day is an expression everyone has probably heard. For French history, this day was a landmark event, and it is not surprising that there is a square of the same name in Paris. Here was the fortress of the Bastille, which was destroyed during the Great French Revolution. Now you can see the July Column on the square and visit the Opéra Bastille. 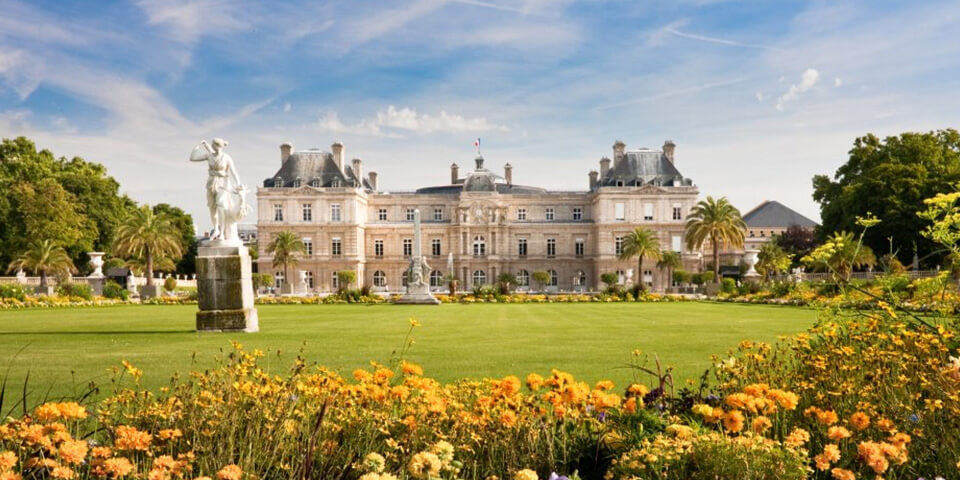 There are many palaces and park ensembles in Paris, and the Luxembourg Garden is one of the most famous. Previously these 26 hectares belonged to the king, but now to the state. In addition to the amazingly beautiful gardens here stands the Luxembourg Palace, which is the seat of the Senate. The park has many attractions, such as a theater of miniatures, ponies, a children’s carousel and much more. 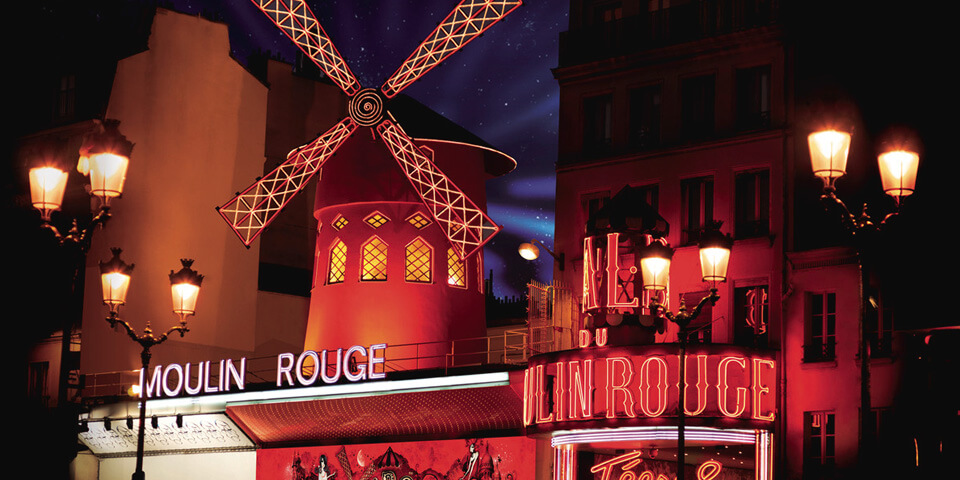 Another symbol of Paris that everyone has heard of is the famous Cabaret Moulin Rouge. It was opened the same year as the Eiffel Tower, timed to coincide with the opening of the World’s Fair. This institution in different years has inspired many directors and singers, about six films about the Moulin Rouge were made. There are also books and a series of paintings devoted to the cabaret. 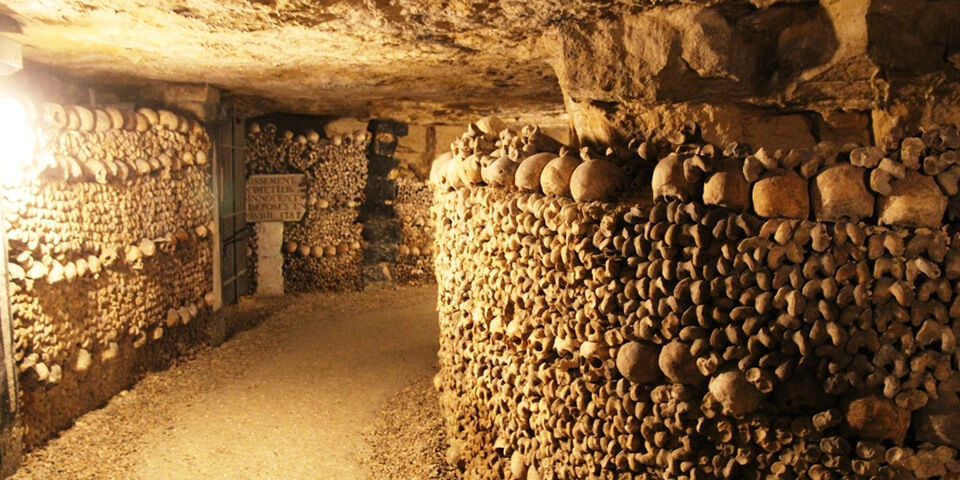 For the real extreme, a walk through the Paris Catacombs is suitable. The history of these 1.5-kilometer tunnels began back in the days of the Roman quarries. After the cemetery of the Innocents overflowed due to the plague epidemic and the Night of Bartholomew, it was decided to make a reburial. The remains of more than 6 million Parisians were moved to the quarries, turning them into a huge crypt. However, the tunnel is very popular with tourists.

READ
The City of Byblos, Lebanon - the Pearl of Phoenicia

One of the most important landmarks of Paris is the Champs-Elysées. This 1.9 km long street attracts thousands of tourists every day. Champs-Elysées are part of the so-called historical axis of Paris, and stretches from the Place de la Concorde to the Arc de Triomphe. This street is divided into two parts – walking and shopping, and both are interesting for visitors to the capital. 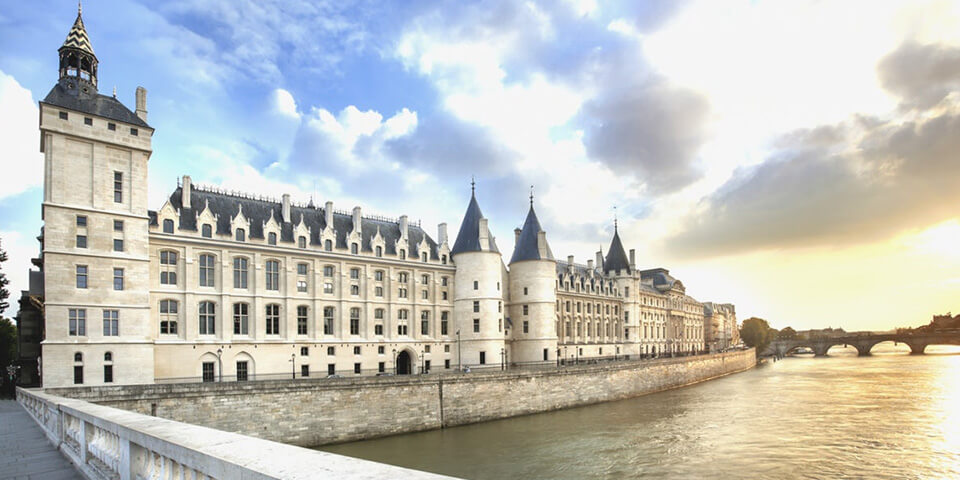 Not only the Chapel of Saint-Chapelle, but also the former royal castle of Conciergerie has been preserved since the time of the Capetians. The first structures on the site appeared as early as the 6th century, when King Clovis moved the royal residence to Paris. Then several generations of kings had a hand in the appearance of the castle. It later became a prison, and was a palace of justice almost until the French Revolution. 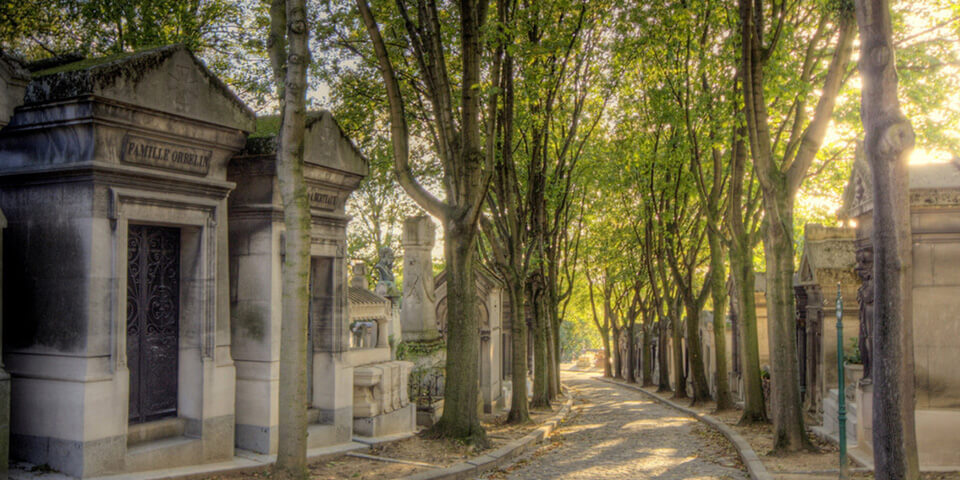 It’s hard to call a cemetery a great place to walk, but in Paris it can be. The Père-Lachaise area is the largest cemetery in Paris and is also a museum of tomb sculpture. For lovers of cemetery romance, a tour of the 48 hectares of this place will leave an unforgettable impression. The history of this cemetery is several centuries old. 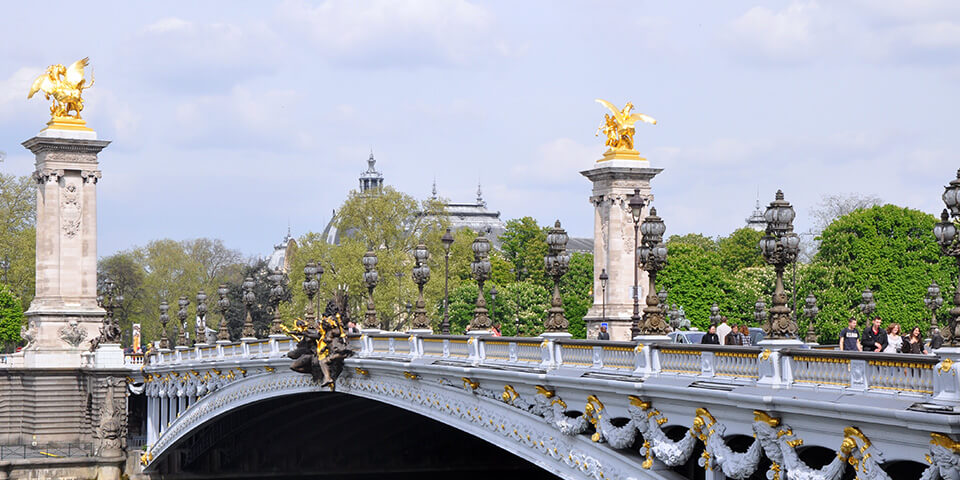 Between the Champs-Élysées and the Maison des Invalides there is the 160-metre-long Pont d’Alexandre III. Anyone can walk across the structure, which was named after the Russian emperor by his son Nicholas II. The latter laid this bridge to commemorate the Franco-Russian alliance in 1896. There are pegasi, angels, and nymphs, and the bridge itself is often called the most graceful in Paris. 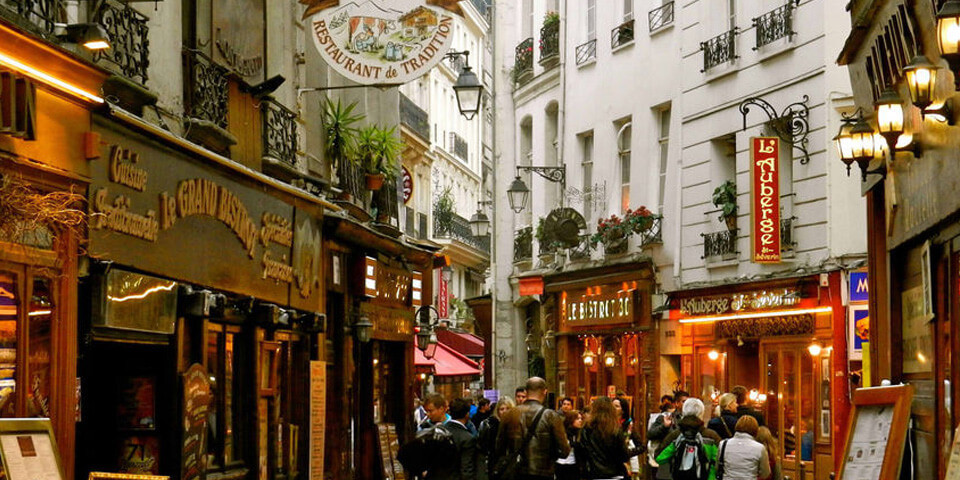 Visit a veritable cluster of institutions of higher learning in the French capital in the Latin Quarter. Here is located and the famous Sorbonne, and in reality only part of the University of Paris, and the Higher Normal School, and the University of Pierre and Marie Curie. And there are also tourist attractions – the Pantheon, the Thermae of Cluny, the Luxembourg Garden. Because of the influx of tourists, it is now too expensive for students to live in this neighborhood!

READ
A tropical paradise in the Caribbean 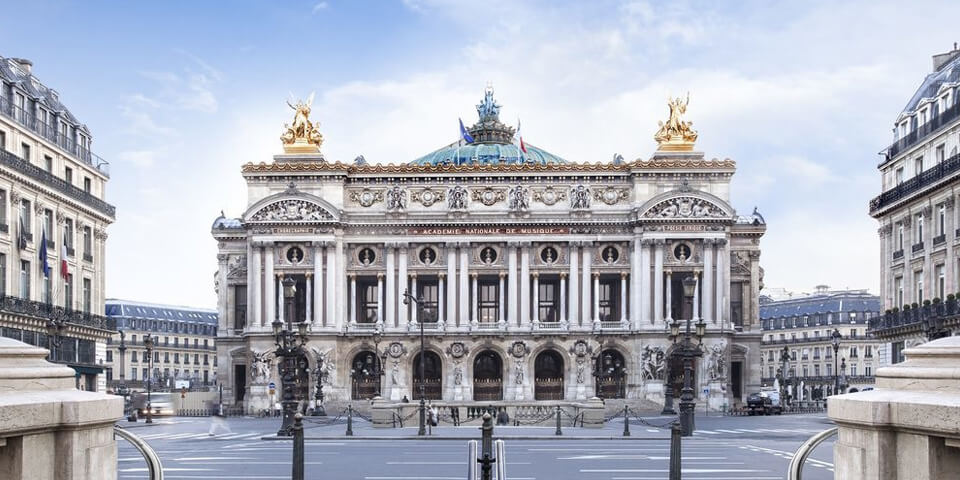 Opera lovers can visit the most important theater in the world, the Opéra Garnier. This beaux-arts style building was built in the 19th century by architect Charles Garnier. This majestic structure inspired the author of the famous novel The Phantom of the Opera. Today, the Opera Garnier is one of the most recognizable theaters worldwide. 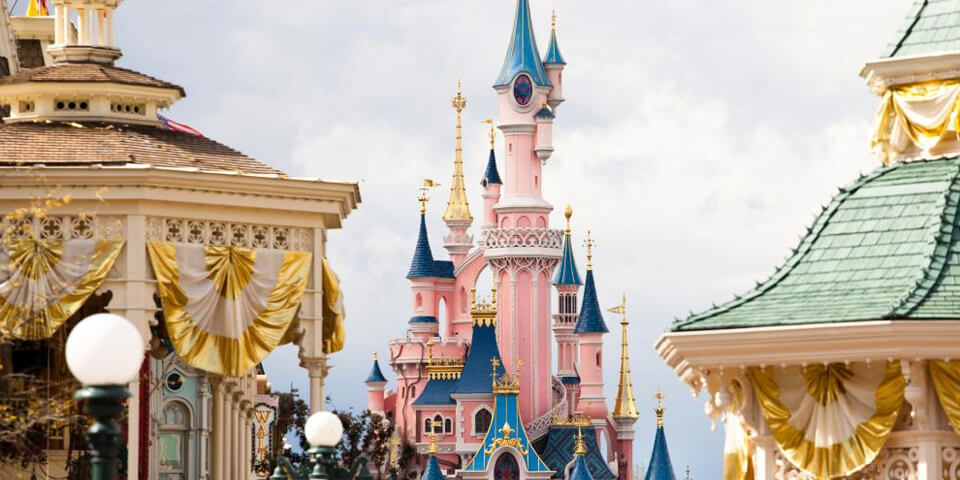 Located just outside of Paris, this Disneyland attracts more than 12 million visitors annually. It was founded in 1992 and was at the time the first Disney theme park in Europe. It has everything for relaxation and fun, from hotels and a golf course to the Castle of Sleeping Beauty.

This is a small fraction of the adventure that lurks in the streets of the capital of France. In Paris you can find interesting places all the time, because the whole city is permeated with the history of the country!