The Rock of Turki, a slice of Antarctica in southern Europe

On the map, the island of Sicily looks like an irregular triangle separated from the shores of mainland Italy by just a few kilometers of sea. Covering an area of 26000 square kilometers it harbors an immense historical wealth as a reminder of the various cultures that lived here in the past, many mountains, including the world-famous volcano Etna, architectural gems of Baroque in the form of many cities and kilometers of beautiful beaches .

A little-known natural phenomenon, located on the southwestern coast of the island near the world-famous archaeological site of Agrigento. The Italians call this magical corner of the coast the Scala dei Turki or the Staircase of the Turks. It is said that this miracle floats between heaven and earth . The rocky massif that juts into the sea along the coast of Realmonte near Porto Empedocle looks from a distance like a piece of coastline more characteristic of the North Pole than of southern Europe. The white stone wall resembles a circle of ice covered with snow. The shining rock, blown by wind and rain for centuries, has turned into a unique formation that resembles a huge staircase rising from the sea. 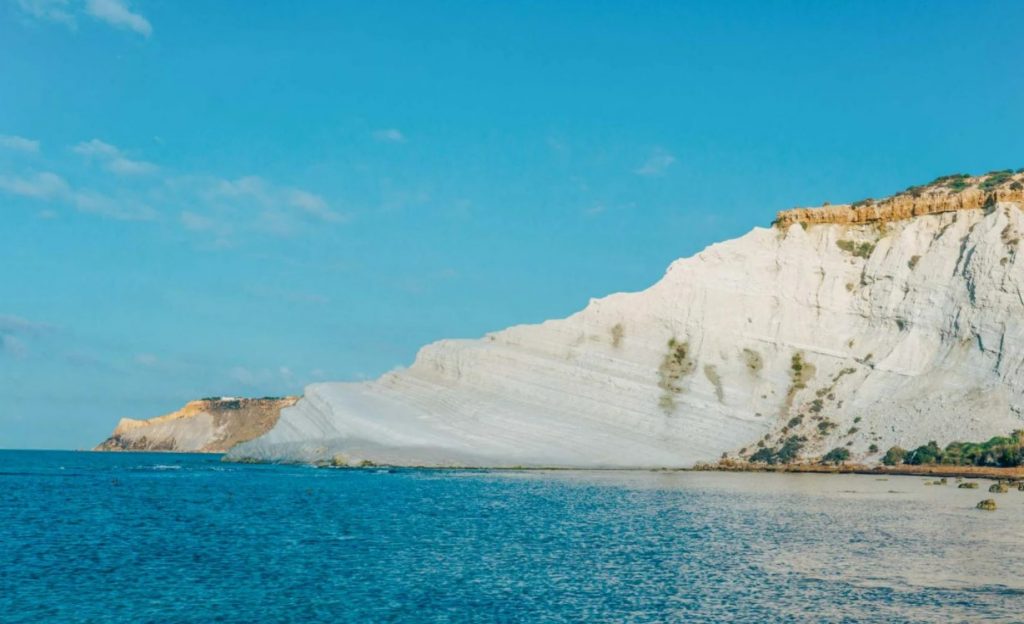 A great place for sunbathing

At first glance, this place may seem cold . Lots of people wander, walk, have picnics and even sunbathe right in the snow. It all seems rather paradoxical, considering that the snow lying next to it brings a certain chill.

The unusual color of the reef is due to its mineral composition . A mixture of clay and carbonate, called saliva, gave the rock a bright white hue. The sediment, which then settled regularly in one place over the centuries, formed an unusual shape resembling a huge, irregularly shaped staircase. This area is so unique and distinctive that in August 2007 the town of Realmonte, which owns the Rock dei Turki, submitted an official request to UNESCO for the inclusion of this unique geological site in the List of World Natural and Cultural Heritage. 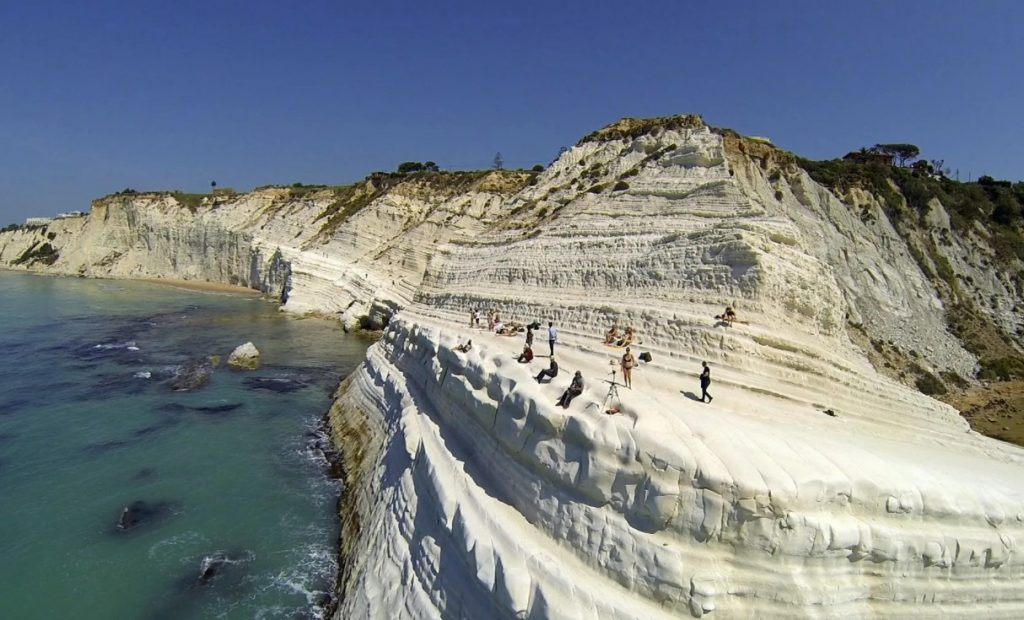 A great place for sunbathing

How a purely Italian place got its name in Turkish

How the unusually white formation surrounding the beautiful sandy beaches got its name The Rock is already clear, but what do the Turks have to do with it? There is also a logical explanation. In the past, the entire area was raided by Saracens (the original name of the Turkish invaders). Turkish pirates regularly found refuge here. According to legend, their ships were moored in the nearby waters, and the rock formations served as a kind of natural shelter from gusts of unpleasant wind.

From this shelter they could also easily climb up the rock between the bays , and by traversing the top of the massif they could plunder neighboring villages and dwellings in a surprise attack. It is said that the Turks stopped their raids on the town of Scala after confronting the population of the current village of Porto Empedocle, which was the only one that defended itself.

How a purely Italian place got its name in Turkish

A place fit for gods, writers, and the chief Italian commissioner

Even the ancient inhabitants of Sicily had many questions about the place . Because of their misunderstanding and confusion, they associated the place with the gods. The unnaturally snow-white formation caused them a certain confusion. They had no real explanation for such an interesting formation located on the yellow-brown sandy beaches surrounding it, and so they thought the Rock was a place created by the gods, for entertainment.

Centuries later, the famous Italian writer Andrea Camilleri chose this place. He came here to relax and get inspiration for his works. He was so impressed by the area that he mentioned it several times in his most famous work, Commissario Montalban. His home is quite nearby, in a town with the fictional name Vigata, so the Scala dei Turki also appears in the film adaptations of his stories .

The Rock dei Turki is a stepped rock on the Realmont coast near Porto Empedocle in the province of Agrigento. The cliff, overlooking the sea, became popular after being mentioned in Andrea Camilleri’s novels about Commissario Montalbano

In Italian the name of the cliff can be translated as “Turkish Steps”. This picturesque place attracts many tourists who love the sea and Sicily. 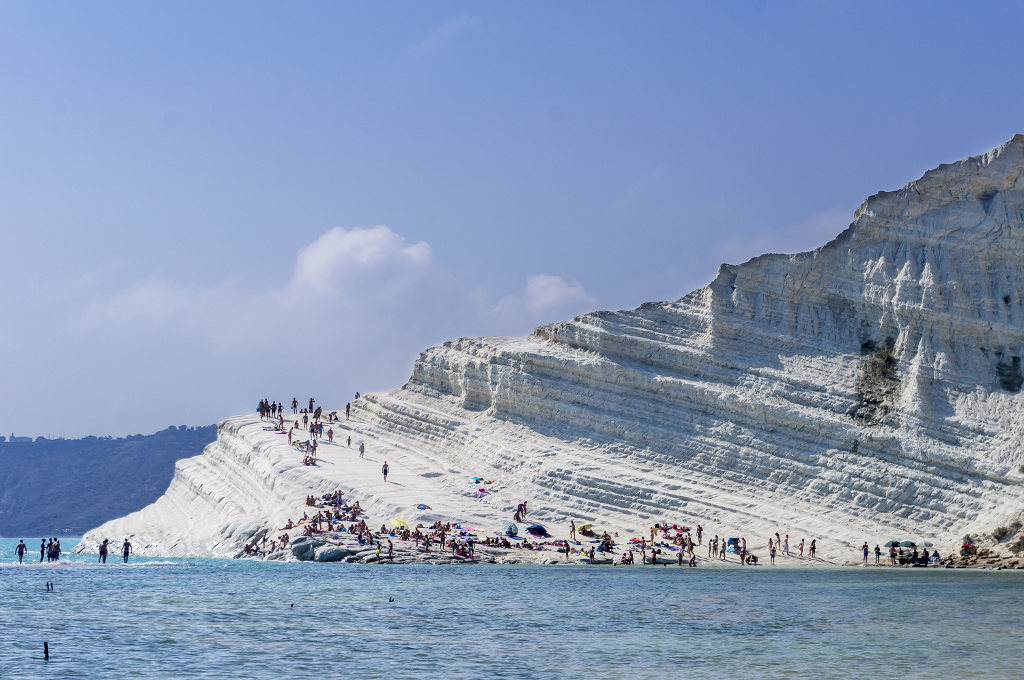 The white rock is composed of soft limestone. Nature, a great artist, with the help of wind and water has created smooth steps and terraces. Climbing these steps, it seems that you find yourself on top of a giant bezhe. Against the whiteness of the steps the sea seems even more azure blue. The local boys often dive from the highest ledges, but it’s better not to take their example, and just watch this spectacle from the side. 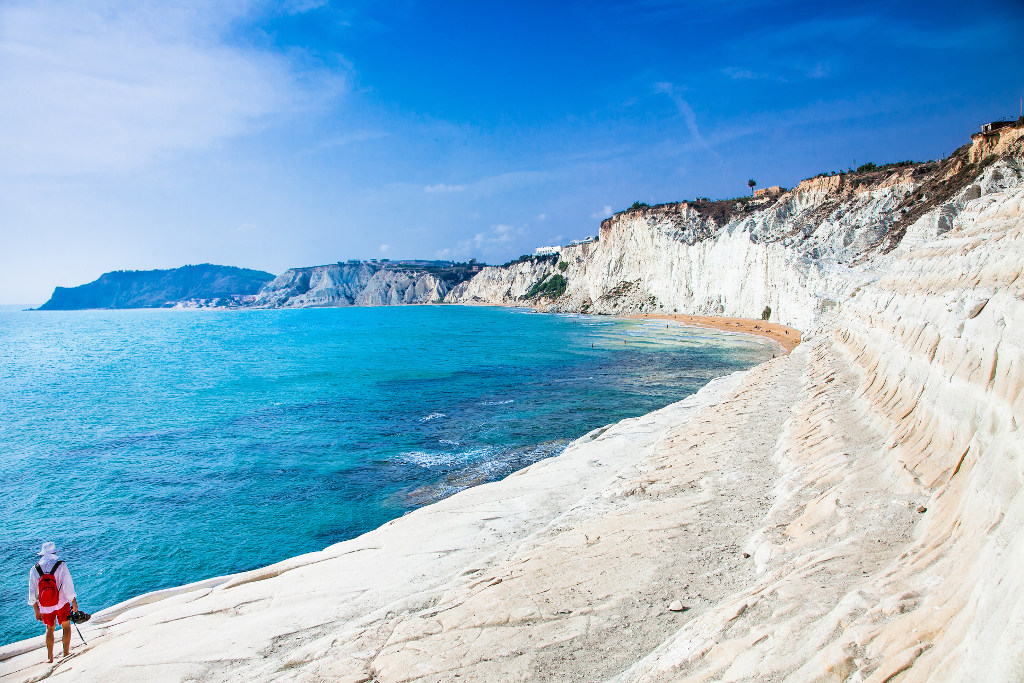 In summer, the sun is very hot here, but the rocks are not overheated – you can walk barefoot on them. You just need to be careful not to slip, especially on the wet rocks. The most adventurous cross the entire cliff and swim on the sparsely populated western beach. By the way, according to one version, the “Turkish Staircase” was named because Turkish and Arab ships used to find refuge in its harbor. 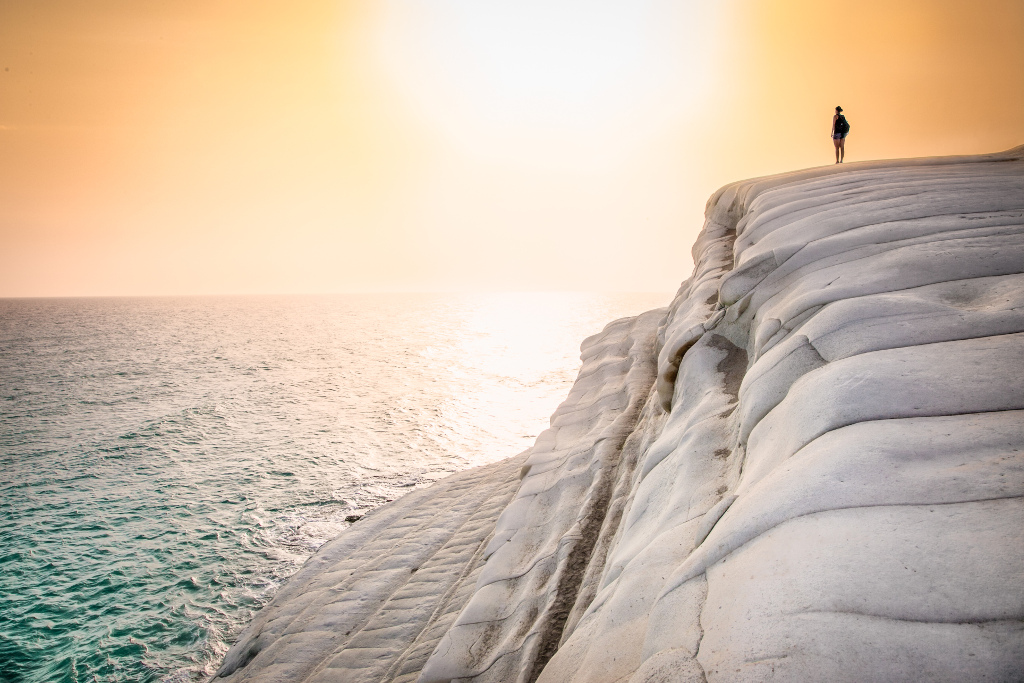 You can get to the Scala dei Turki by taking S.S. 115 and then taking road number 68. To get to the mountain from the east, you must cross the Realmonte, and from the west, go through Porto Empedocle.

By bus: In summer, there is a bus from Porto Empedocle.

Parking: There is a pay parking lot, but in high season it’s better to arrive early to have enough space.

Beaches: There are two beaches near the mountain. 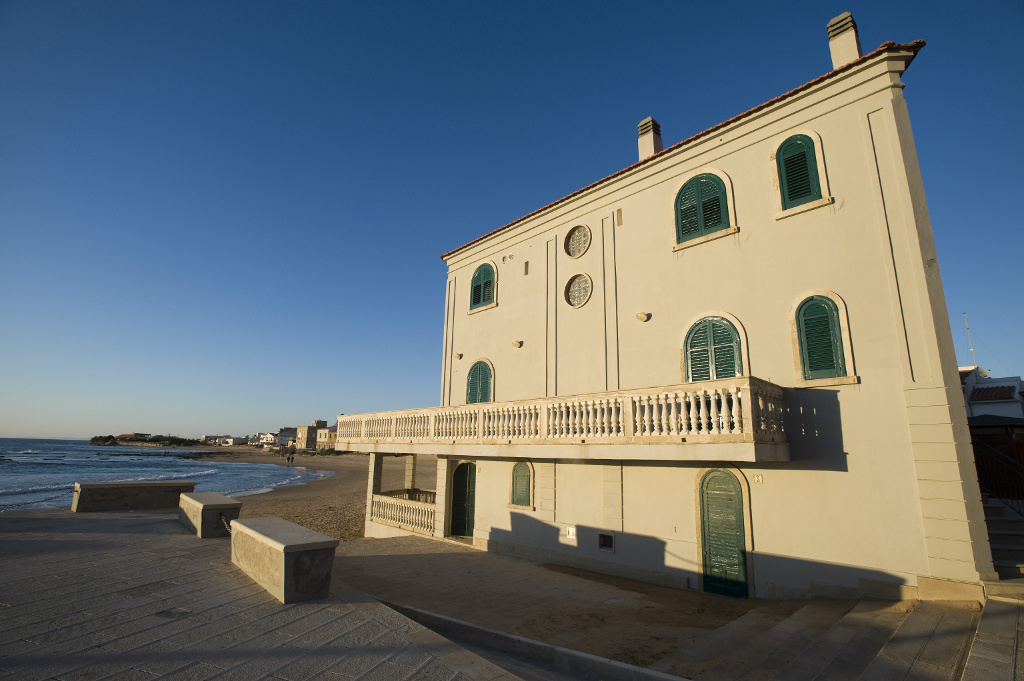 At the entrance of the town you will see the greeting: “Welcome to Vigata”. This is not a mistake, we are talking about the fictional town from the novels of Andrea Camilleri. The famous writer was born here and there is a bronze monument to Commissar Montalbano on the main street. However, a stroll along the lively Via Roma and a visit to one of the elegant outdoor cafés is not the only reason to visit Porto Empedocle, or “a Marina” as it is called by the people of Agrigento, implying that it used to be the city’s commercial port. Here you will find the beautiful and massive Tower of Charles V, formerly a military fortification and then a prison. Inside the tower there is the Armory and a permanent exhibition of works by Giuseppe Agnello, author of the statue of Commissar Montalbano. There is also a ferry from the port to the Pelagic Islands.

Thank you for reading us again!

By uploading photos to “Your Italy” you accept the following terms and conditions: 1. All users who fill in the form with their name, contact details and the description of their photo are allowed to take part. 2. The photo must be original and the rights to it must belong to the user. 3. Uploaded photos must not contain: 3.1. recognisable people if they have not given permission to publish their photos on Your Italy; 3.2. logos and trademarks if their copyright holders have not authorised Your Italy to publish them; 3.3. nude bodies if they are not works of art, obscene, immoral, unacceptable images; 3. 4. any objects that infringe the rights of third parties; 3.5. by placing a picture in a photo gallery, users agree to its placement in this gallery and in the materials of the site with an explicit indication of the author of this picture, as well as in the publications of social networks related to this site. 4. The users also agree to be contacted by representatives of “Your Italy” to discuss other possible uses of the image provided.