Tunisia is a country to which one goes first of all to get to the sea. We have already told you where Tunisia is and what the sea is like in Tunisia, and now we want to tell you what the beaches of Tunisia are . From the article you will learn what you can expect from each of the resorts in terms of beach holidays, and will be able to decide for yourself where the best beaches in Tunisia – both by objective criteria and by matching your personal needs and tastes. 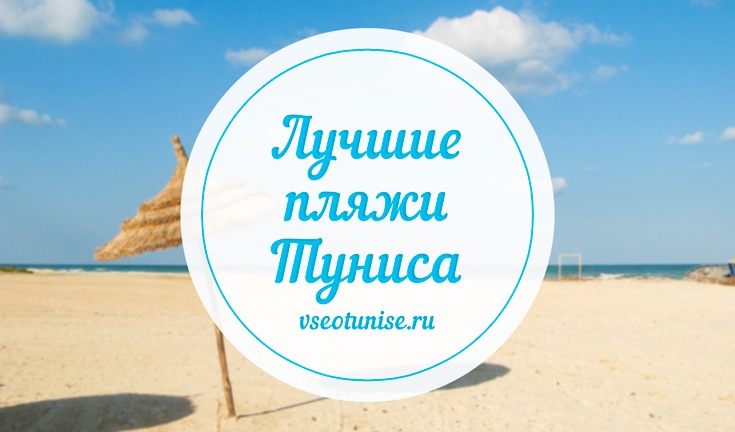 Where are the best beaches in Tunisia? Overview

Most of the coastline of Tunisia falls on the beaches , so it is not surprising that this country has become such an attractive place to vacation in the bathing season. And it is not just the quantity but also the quality of the beaches: there are almost no steep, rocky shores, especially near the popular resorts .

To run into a rocky slope is possible only in a few sections of the coast of Mahdia and Hammamet, otherwise the beaches consist of very fine and light sand, pleasant to the touch.

The width of the beach zone rarely happens more than 50 meters, but this is usually compensated by its length and a gentle descent into the water, which is especially tempting for families with children.

Many consider the benchmark for sand on the exotic resort of white, and, unfortunately, pure white is not found here. But something very close you can find in Mahdia and on the island of Djerba, as well as in some places in Hammamet. All these resorts can be considered a good choice for a beach holiday, although there are nuances.

When choosing a resort, you have to decide for yourself how well-appointed vacation you want. All beaches in Tunisia are municipal property, but their cleanliness is not the same, as well as amenities and the number of tourists.

The beaches of the resort of Monastir with Ribat fortress (scroll with the mouse to see the panorama):

Hammamet and Sousse are the resorts with the most developed tourist infrastructure, so their beaches are usually very crowded. This can be a plus, because it means that there are usually all the amenities and entertainment one would expect from a beach vacation. But on the other hand, it is a minus for those who do not like crowds and prefer cleanliness. 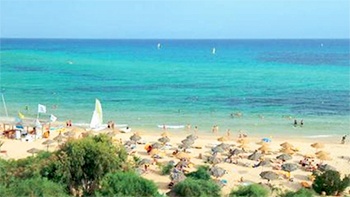 Despite the fact that all officially recognized beaches must be cleaned in time, this does not always happen, and in Hammamet and Sousse the sand is often strewn with trash and other human waste. The cleanliness of the sea leaves much to be desired.

The beaches of Mahdia and the island of Djerba are much more spacious. Here you can find a lot of undeveloped corners. It is also much easier to find “wild” beaches, but you have to be very careful. Local laws are strict and what is allowed in tourist areas can cause a very negative reaction of locals if they bump into you outside.

Girls in any case should not rest on the “wild” beaches unaccompanied by men. Also, it is highly undesirable that you were caught expressing intimate feelings for your loved one. And certainly girls in Tunisia should not sunbathe topless or even naked.

If the women can easily expose the upper part of the body in some hotels, then the full nudity is prohibited, regardless of gender. For this reason there is no nudist beaches in Tunisia.

Almost all the beaches of Hammamet are developed tourist industry, and for a reason: the sea is very quiet and the sand is fine and uniform. The beaches run along the coastline, almost uninterrupted, and you can walk to Yasmine Hammamet, the yacht port, without leaving the sandy strip while walking.

There are almost no stretches of beach in Hammamet without crowds, but the situation is much better than in Sousse. The cleanliness of the sand and sea are monitored, not only at the hotels, but also remove debris and seaweed on time. 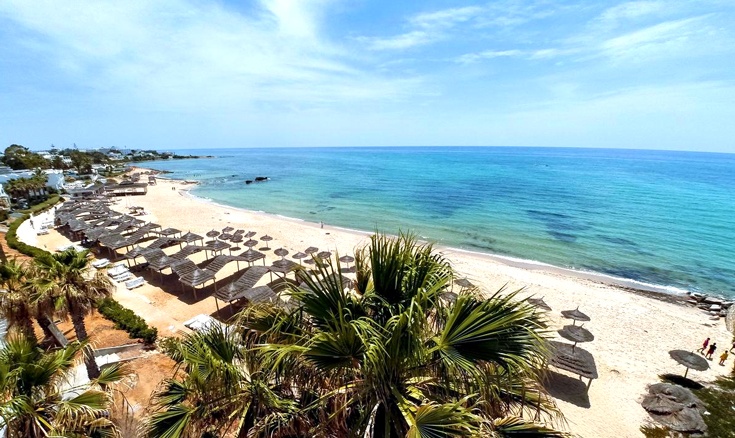 The beach at the 4-star Hotel Bel Azur in Hammamet, Tunisia

The cultural center of Hammamet and some other places are less crowded, but still this resort is oriented to an active beach holiday. By the beach here you can find a lot of water attractions, rent sun beds or equipment for water and beach sports. Also on the beaches there are always a lot of institutions where you can buy food or drinks.

Hammamet can be a perfect choice for people who do not want to break away from the hectic pace of life, but have high quality requirements.

Hotels with good reviews for vacations in Hammamet:

The Beaches of Djerba

The island of Djerba is the warmest resort in Tunisia due to its proximity to the Sahara and the fact that the beaches on the northeastern side of the island are protected from the cold currents by a sand spit. The bathing season here is longer than elsewhere, but you should prepare for a quiet and measured vacation. Due to the large width of the beaches (sometimes up to several hundred meters), it is spacious, even in the most developed areas of civilization.

The beach of one of the hotels of Djerba on the photo panorama:

Only a small part of the shoreline is occupied by hotels, and by renting a car you can easily find a deserted bay or lagoon. Unfortunately, the sea may not be too clean, not at the expense of garbage, as in Sousse, but because of the seaweed nailed to the shore. They are usually cleaned only on the territory of hotels. However, they will disturb only those who like to splash in shallow water: if you go further away, there will be no algae.

This is one of the wild beaches on the island of Djerba in Midoun (turn the photo to see the panorama in full):

The sand on Djerba is not as fine and uniform as in other resorts. The best is in the south of the island, but it is the southern part that is the worst developed by tourism. In the northern and northeastern part, where most hotels, the sand is coarse or mixed.

Hotels for holidays on the island of Djerba with good reviews:

Which beach in Sousse?

Of all the listed resorts, Sousse is the least “beachy.” To sunbathe quietly on the clean sand or splash in the sea you are unlikely to be given, and it’s not just about other holidaymakers, who come here in the thousands. Local residents, wishing to stick their goods and services to you, can be extremely intrusive, especially in the beach area.

On the municipal beaches of Sousse it is better not to go at all: despite the fact that specially appointed workers are supposed to clean them, it happens not everywhere, and the locals go there willingly, all day and whole families, and they are not always friendly to tourists.

Municipal beach Bou Jaafar in Sousse on the photo panorama (you can rotate the photo with the mouse):

On the beaches, divided between the hotels, the situation is better. And the livability and cleanliness of beaches and the quality of recreation in general are not homogeneous here. The resort area can be divided into two zones, the Sousse and the port of El Kantaoui, which was created especially for the needs of tourism. The closer to El Kantaoui , the better and more comfortable are the beaches (and the more luxury hotels). The beaches immediately around El Kantaoui meet the highest quality standards.

Sousse is best suited to holidaymakers who wish to spend limited time at sea but who want to enjoy all the other activities an exotic country has to offer.

Panorama of one of the beaches in Sousse:

Hotels in Sousse with good reviews: 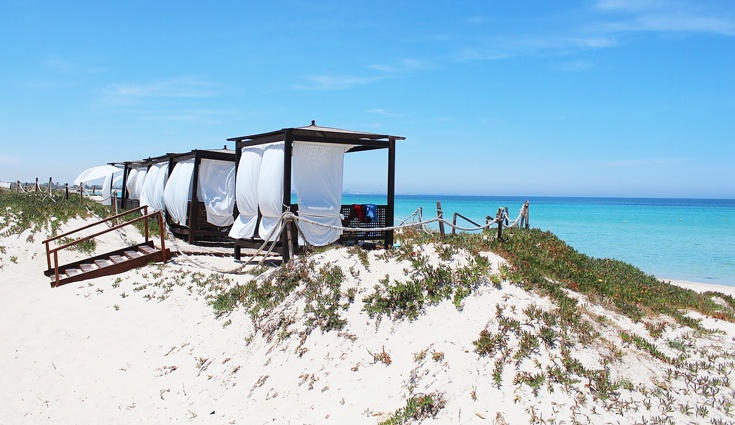 Almost the entire beach area of Mahdia is occupied by hotels, in every way improving it and taking care of the purity of the sand and sea. “Wild” beaches, incredibly picturesque, but not too comfortable for swimming, can be found on the south coast. This is where local divers have settled, attracted by the transparent water of the local bays. Yet it is not snorkelling that is usually the reason for going to Mahdia.

This resort is ideal for family holidays, especially holidays with children. The descent into the sea everywhere is very gentle, so that even the kids will be able to turn around. The beaches here are not too wide, but it does not prevent them to be extremely attractive due to the smallest, as a powder, and almost white sand. Algae at the beach is not much, and they are usually cleaned up in time.

Hotels with a private beach in Tunisia

If you go to Tunisia to swim and sunbathe, in most cases you will be better to settle in a hotel with its own beach. The positive sides of this choice are many. Areas of the beach, managed by the hotel, is usually cleaned by staff, and the sea is cleared of seaweed. The rules of conduct are more free.

Hotels of high enough level do not let strangers in their territory, which is especially important if you are tired of annoying traders who constantly invade the public beach and try to impose their goods on you. 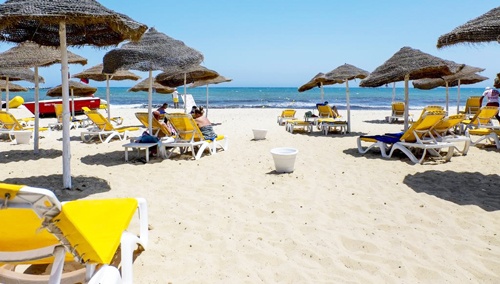 Not only does this hotel boast a private beach, which is a four-minute walk away, but it also has many other attractive features. In addition to the beach, guests will find several swimming pools, one with a hot tub and located in a picturesque three-story garden with artificial grottoes and a slide. There are also spa and thalasso treatments available. 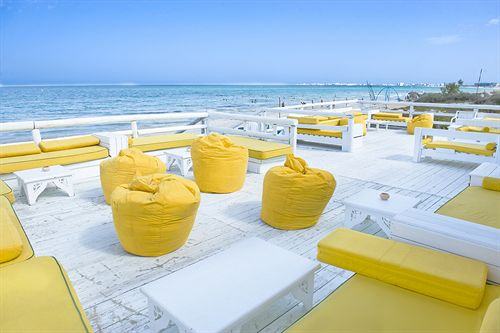 Designed in the traditional Tunisian style, LTI Mahdia Beach Hotel not only has its own beach, but also is located directly on it. The sand on it is of the highest quality, which is characteristic of the beaches of Mahdia: fine and almost white. In addition to the sea, vacationers can enjoy swimming in the huge outdoor pool of complex shape, which serves as a real decoration of the hotel. In addition, the hotel has an indoor pool and a heated pool. The rooms have picturesque views of the sea or garden.

Prices for tours to LTI Mahdia Beach start from 80 thousand for a week of rest for two people on the program “ultra all inclusive”. 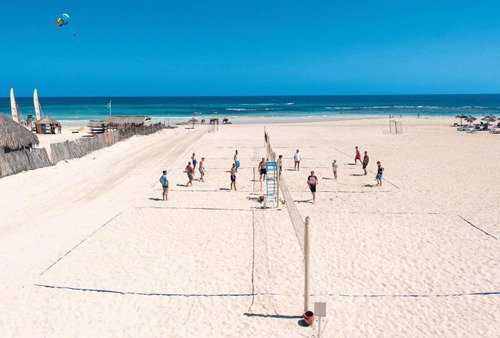 One of the best hotels for a beach holiday on the island of Djerba. The hotel has several pools, there is a pool by the bar. The hotel has a huge area and an equally huge selection of activities. The rooms are modern, and the hotel was renovated in 2011. The most popular months for vacationing in this hotel are July, June, October.