The history of the European Union began in 1951 with the formation of the European Coal and Steel Community (ECS), which consisted of six countries (Belgium, France, Italy, Luxembourg, the Netherlands and Germany). Within the countries, all tariff and quantitative restrictions on trade in these goods were lifted.

On March 25, 1957, the Treaty of Rome was signed to create the European Economic Community (EEC) on the basis of the EEU and the European Atomic Energy Community.

On June 14, 1985, the Schengen Agreement on the free movement of goods, capital and citizens, a treaty providing for the abolition of customs barriers within the European Union and tightening controls at its external borders, was signed (entered into force on March 26, 1995).

On February 7, 1992, the Treaty establishing the European Union was signed in Maastricht, Netherlands (entered into force on November 1, 1993). The Treaty completed the work of previous years to regulate the monetary and political systems of European countries.

In order to achieve the highest form of economic integration between the EU states, the euro was created, the single monetary unit of the EU. Non-cash euro was introduced in the territory of the EU Member States on January 1, 1999, while cash banknotes were introduced on January 1, 2002. The Euro replaced the ECU, which was the conventional unit of account of the European Community, which was a basket of currencies of all EU member states.

The European Union is responsible for, among other things, the common market, customs union, the single currency (some members retain their own currency), common agricultural policy and common fisheries policy.

Institutions of the European Union:

The highest political body of the European Union is the European Council . As a meeting of heads of state at the highest level, the Council actually defines the tasks of the Union and its relations with the member states. The sessions are chaired by the president or prime minister of the country presiding over the EU’s governing bodies, alternately for a six-month period.

The European Parliament is an assembly of 786 deputies directly elected by citizens of EU member states for a period of five years. Deputies are grouped together according to political orientation.

In order to carry out a unified monetary and financial policy and to equalize the level of economic development of the different regions within the EU, the following institutions have been created: the Single Central Bank, the European Investment Bank, the European Court of Auditors, the European Development Fund, the Economic and Social Committee, the Committee of the Regions.

WHICH COUNTRIES ARE MEMBERS OF THE EUROPEAN UNION?

The European Union (EU) is a unique economic and political association of 27 European countries that have formed a “common market,” primarily ensuring the free movement of goods and people.

It has a single currency, the euro, which is used by 19 member states as of 2022, and its own parliament, which has the power to make decisions in a wide range of areas, from issues related to environmental protection to setting tariffs on mobile telecommunications.

MAP OF THE EU COUNTRIES 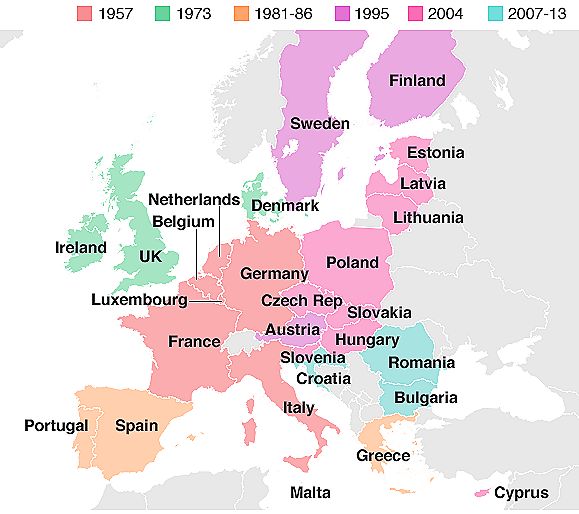 The current list of countries in the EU in 2022 (as of today) is as follows.

On Thursday, June 23, 2016, the United Kingdom held a referendum known to the world as Brexit . More than 30 million people took part in the vote. The final turnout was 71.8%. As a result, 51.9% of Britons expressed their desire to leave the European Union. The majority of the citizens of England and Wales supported the exit from the EU, while the residents of Scotland and Northern Ireland were against it.

According to article 50 of the Lisbon Treaty, which entered into force in 2009, any country has the right to leave the European Union. This article regulates the procedure of exit from the EU, in particular, a maximum of 2 years is provided for final agreement of conditions. The official start of the process of Britain’s secession from the European Union was scheduled for March 29, 2019. This was followed by a six-month extension until October 31, 2019 .

Important. At midnight from January 31 to February 1, 2020 Central European Time, the United Kingdom formally withdrew from the European Union. The country lost representation and voting rights in the EU, but remained part of the single economic space until the end of 2020. Within 11 months, Britain and the European Union had to agree on new terms of trade and cooperation. Negotiations are currently ongoing.

The list of countries entering the EU in 2022 includes 27 states .

Creation of the European Union

The idea of creating the European Union arose against the backdrop of the horrific consequences of World War II. To avoid a repetition of such events and to link countries together economically as much as possible, in 1950 the French Foreign Minister Robert Schuman suggested uniting the coal and steel industries of Europe.

READ
The most beautiful bridges in the world

As a result, in 1951 six states – France, West Germany, Italy, Belgium, the Netherlands, and Luxembourg – signed the Treaty of Paris and created the European Coal and Steel Community. The rapid growth of trade relations over 6 years led to the conclusion of the 1957 Rome Accords, which conditioned the formation of the European Economic Community, the basis of the modern EU .

The European Union in its present form was created on the basis of the Maastricht Treaty in force since November 1, 1993, which led to the creation of the single European currency, the Euro. The Treaties of Amsterdam (1997), Nice (2001) and Lisbon (2009) subsequently amended the main agreements of the EU.

Accession of countries to the European Union

The first wave of EU enlargement occurred in 1973, when Britain, Ireland and Denmark joined the union. In 1981, Greece joined, and 5 years later (1986) Portugal and Spain joined. In 1995 Austria, Finland and Sweden joined the European Union.

The largest expansion took place in 2004, when the EU received 10 new members – Cyprus, the Czech Republic, Estonia, Hungary, Latvia, Lithuania, Malta, Poland, Slovakia and Slovenia. Romania and Bulgaria joined in 2007, and the last country to join the EU in 2013 was Croatia.

Functioning of the EU

The combined population of the EU member states exceeds 510 million people . Formerly a purely economic union, over the years it has evolved into a powerful political association, jointly addressing issues of security, migration, climate change, health, education and more. The fundamental principles of the EU are based on a single internal market ensuring the free movement of goods, services, money and people, including labor.

The core values of the EU include the rule of law, freedom, democracy, equality, and respect for human rights and dignity. Seven main institutions ensure the functioning of the EU:

The Council of the European Union.

The Court of Justice of the European Union.

Despite the nominal independence of each EU member and collective decision-making, individual countries dominate this association. For example, until 2021, four countries – Germany, France, Italy and the United Kingdom – accounted for more than half of the contributions to the overall budget of the European Union. In comparison, the aggregate share of the Baltic states-Lithuania, Latvia, and Estonia-is less than 1%. After Brexit, the situation is beginning to change.

Many EU member states receive considerable funds from the general budget to maintain the economy and social development, which significantly exceed the amount of their initial contributions. As a result, they partly lose their sovereignty and their ability to significantly influence major decisions made within the European Union. Germany has been the political and economic leader of the EU for many years.

As mentioned above, the list of EU countries in 2022 includes 27 members. The most recent addition was in 2013, when Croatia joined the union. Four Western European states – Iceland, Norway, Switzerland and Liechtenstein – are not part of the EU, but are closely integrated into the single economic market and are members of the Schengen Area.

In order to join the EU, a candidate country must meet the so-called Copenhagen criteria, which are based on democratic governance, respect for human rights, a functioning market economy and commitment to EU goals and intentions. The right to enter the European Union on the basis of geography is laid down in Article 49 of the Maastricht Treaty.

READ
Where to spend a vacation? Abkhazia

Important. On June 23, 2022 at the summit in Brussels, the European Council granted Ukraine and Moldova the status of candidates for accession to the European Union. The given decision was unanimously supported by all leaders of the states and the governments. In addition, community leaders confirmed Georgia’s European perspective. Earlier, in 2014, the European Union signed association agreements with Ukraine, Georgia and Moldova.

All countries except Albania and Northern Macedonia are negotiating to join the EU. Bosnia and Herzegovina and Kosovo are considered potential candidates. According to the statements of high-ranking European officials, we can conclude that no new countries are expected to join the EU in the next few years.