The most beautiful cities in Italy – TOP 12

Distant and beautiful Italy has always fascinated and beckoned people. Center of education, enlightenment and the development of the arts in Europe, which has influenced all neighboring states. In addition to beautiful landscapes, each of the Italian cities keeps a piece of common heritage in the form of magnificent buildings and monuments. Here are the most beautiful cities in Italy, which should visit the traveler! 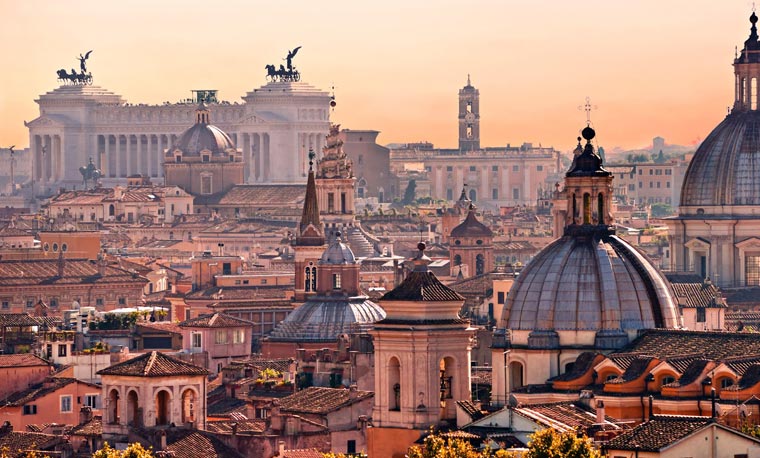 No one would argue that Rome is the most beautiful city in Italy. The capital of the once powerful Roman Empire and to this day attracts tourists from all over the world. “The City on Seven Hills has many unique cultural heritage sites. Over the centuries Rome has been transformed many times. Here you can see the famous Colosseum amphitheater, in the arena of which gladiators and wild beasts fought; the luxurious Pantheon temple, the home of the ancient Roman gods; as well as many medieval cathedrals and churches, which show the development of Catholicism. St. Peter’s Cathedral, for example, is the largest Catholic church in Europe. In addition, visitors can admire the majestic fountains: the Trevi Fountain, the Four Rivers Fountain and the Fountain of the Turtles, which are incredibly beautiful. 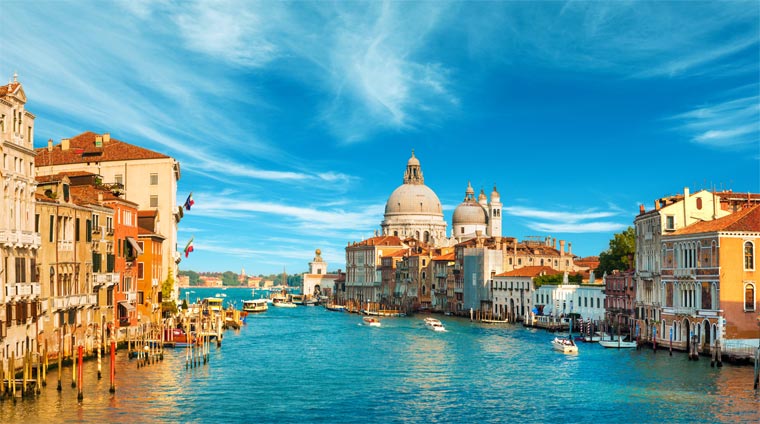 It would be inexcusable not to include Venice in the list of the most beautiful cities in Italy, which has always been an amazing and extremely romantic place. The city on the islands of the Venetian Lagoon is known for its canals, the houses on stilts and the leisurely gondoliers that move along the canals. The main “street” of the city is the Grand Canal, depicted in most images of the city on the water. Venice is famous not only for its seasonal floods, but also for its gorgeous, exquisite architecture. One only has to look at the Doge’s Palace or St. Mark’s Basilica to see how different and interesting styles have blended into the local culture. From the many beautiful bridges of Venice want to single out Rialto Bridge and Bridge of the Sighs, which are not only ancient but also the most important monuments of the city. Burano Island with its brightly colored houses is a great tourist attraction. 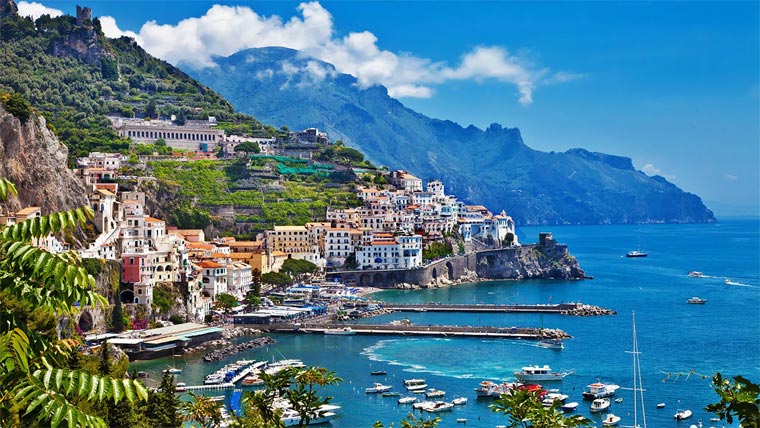 The majestic port of Naples, located at the foot of the famous volcano Vesuvius is not only the most beautiful city in Italy, but also one of the most famous and popular among tourists. This location has made Naples one of the most popular motifs of many Italian artists. Apart from the beautiful natural panoramas, Naples also boasts some remarkable architectural monuments. The National Museum and National Art Gallery with works by Caravaggio, El Greco or Raphael and the National Archaeological Museum of Naples with pieces from Pompeii excavations are extremely important cultural centers. Castel del Ovo, or egg castle, which is a very unusual fortress, is widely known. In addition, the city has a huge number of Gothic cathedrals, churches and Christian monasteries. 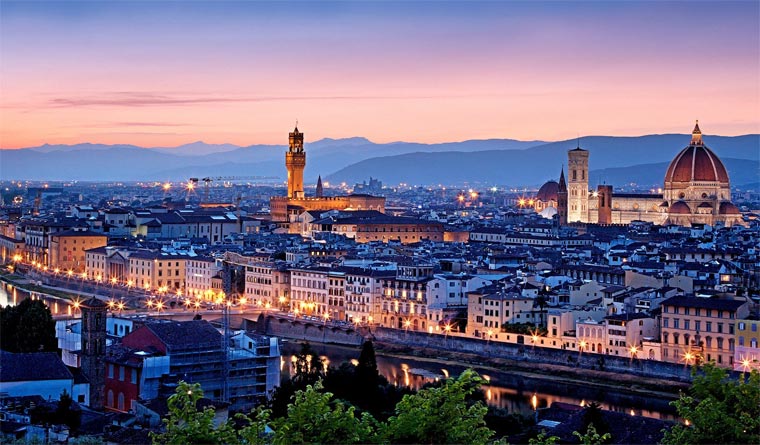 Florence can safely be called the cultural capital of the past. It is an incredibly picturesque Italian city on the Arno River, which has brought to the world the talents of Michelangelo and Leonardo da Vinci, Dante and Donatello and many other outstanding personalities. Strolling through the local streets, you can sense its rich past. The city’s architectural treasures include the cathedral of Santa Maria del Fiore, which is striking in its scope and detail, the church of Santa Maria Novella, as well as numerous palaces. Architectural ensembles such as Palazzo Strozzi, Palazzo Pitti or Bargello simply cannot fail to make a strong impression. This is where the residences of aristocrats and monarchs were located. Florence is rich in various museums. So in the Uffizi gallery collected outstanding works of art from paintings and icons to frescoes and sculptures. 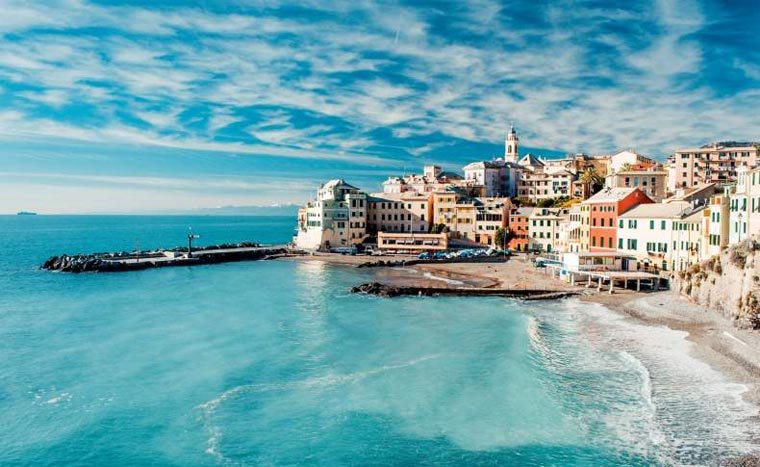 Genoa is the largest seaport and one of the most beautiful cities in Italy, famous for its incredible scenery and rich cultural heritage. Every year thousands of travelers come here to stroll through Piazza Ferrari, climb the famous Lantern lighthouse or visit the huge St. Lawrence Cathedral. These are indeed unique sights, but beautiful Genoa contains many more interesting sites! Lovers of luxury architecture will be impressed by the ensemble of Palazzi dei Rolli palaces, formerly home to members of the ruling dynasties. Genoa, being a port city, also has a maritime attraction. In the bay of San Fruttuoso there is a two-meter statue of Christ of the Abyss, which stands directly on the bottom. Installed in honor of the dead divers, it has been one of the visiting cards of Genoa for half a century. 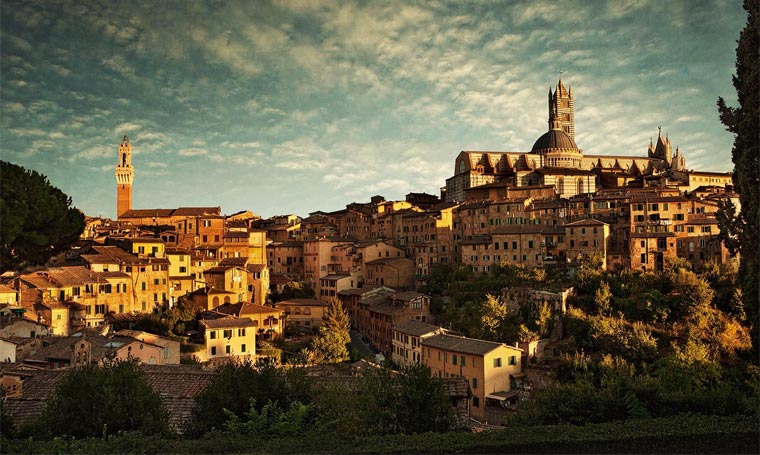 Speaking of historical monuments, it is impossible not to mention the beautiful Italian city of Siena. This city, whose name dates back to the tribes of Etruscans or Gauls, has a huge number of magnificent buildings. Not for nothing UNESCO included Siena in the list of world heritage, because there really is a lot to admire! It’s a fantastic country of medieval castles and cathedrals! Just look at the Church of St. Clement and the Cathedral of Siena! These are magnificent examples of Gothic architecture, which is permeated with the spirit of Catholicism. The whole Old Town area is one of the most important tourist attractions in Italy. Siena is the city of students: many universities and cultural monuments make the city a haven for students and tourists. 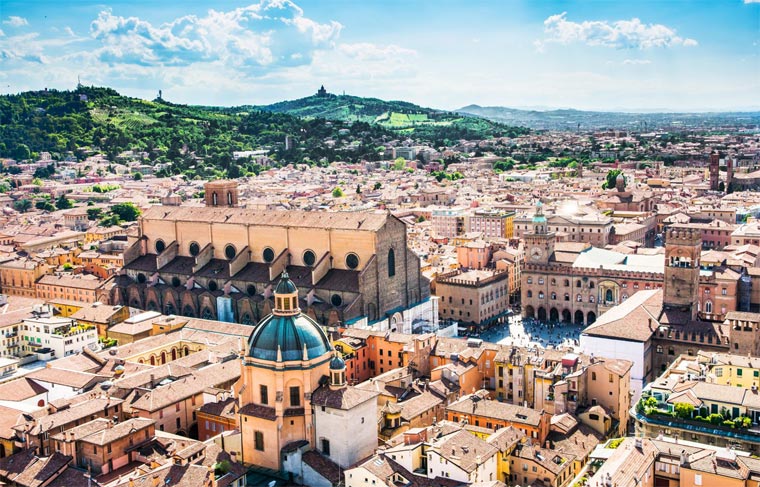 Bologna is the oldest university center in Europe. The first university appeared here back in 1088, turning the course of life and development to education and enlightenment. Bologna can be called without exaggeration the most prosperous city in Italy, because the level of income and quality of life here is high. Cultural traditions and values are another of the city’s riches. The main squares of Bologna are Piazza Nettuno and Piazza Maggiore. Opera lovers will be delighted, because here is the famous all over the country opera theater “Teatro Comunale di Bologna”. Immortal works by Italian and other classics come to life on its stage. While visiting this beautiful city tourists can also admire the Gothic palazzo di Re Enzo and palazzo del Podestà, the unfinished San Petronio Basilica or the ensemble of churches in Santo Stefano. 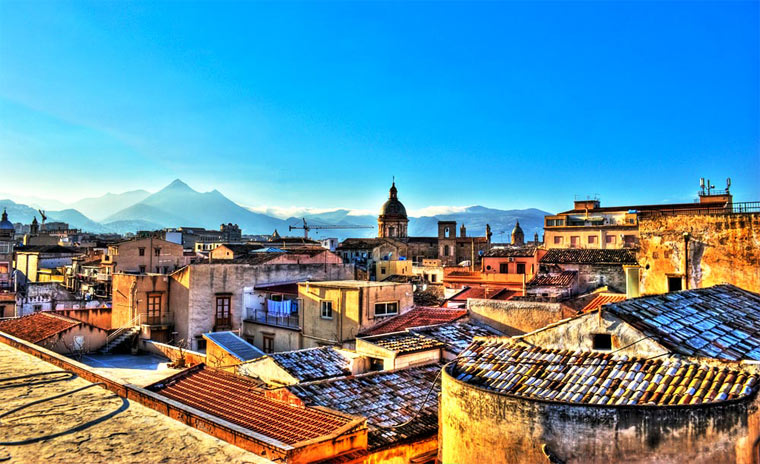 The main city of the island of Sicily certainly attracts the eye with its beauty. It sits on the shore of a vast sea with quiet bays and high hills. A place worthy of a painter’s brush. In Palermo there are nearly three hundred different Catholic churches! Many of them are Gothic, others a version of the Baroque, once very popular in Europe. Some buildings, like the Royal Palace, are decades old and incorporate many features of different styles. The city has beautiful squares, such as Piazza Pretoria with its magnificent fountain. It is an ideal place for a walk during the day as well as a fan. Palermo has a local underground cemetery called the Catacombs of the Capuchins, which receives considerable attention from tourists. 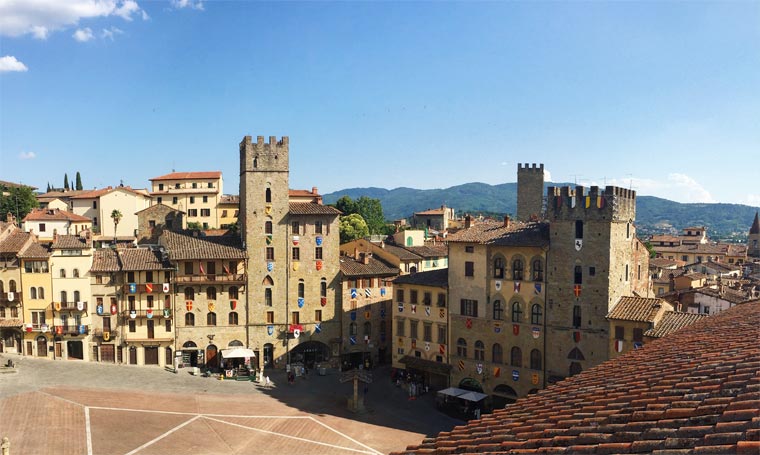 The beautiful city of Arezzo is nestled in a picturesque area of Italy: at the head of the Arno River and surrounded by rugged mountains. The central square of Arezzo is the heart of the old town, which preserves the memory of a solid past. Its architectural heritage includes the Cathedral, which was built on the site of a small early Christian church. It’s a huge structure that’s been under construction for several centuries, and it’s over 500 years old since it was completed! The city also has museums of the painter Vasari and the famous poet Petrarch, which once served as homes to these prominent figures. Of modern attractions, the UnoAErre Jewelry Museum is worth mentioning, with its rich collection of precious metals and stones. 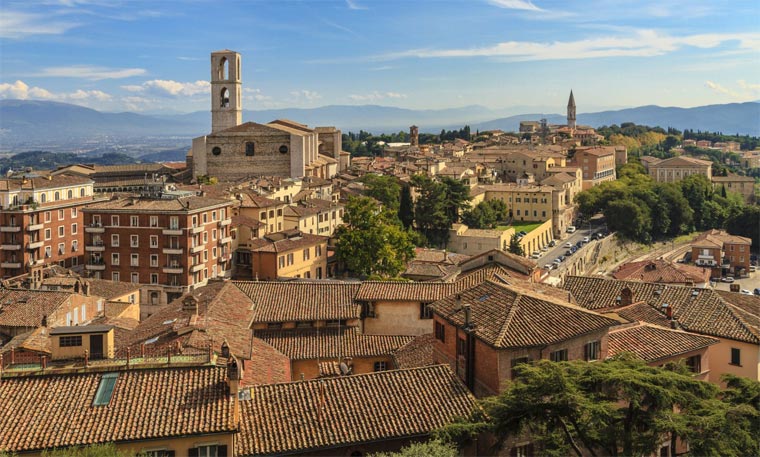 Perugia is a very beautiful city in Italy, where different cultures and styles of art merge. Here you can easily find buildings from the time of the first Etruscans, as well as many luxurious Gothic cathedrals and even works from the Baroque period. Walking through this small but pleasant town, you can see the powerful temple of the Knights Templar, the Church of San Bevignate, pass the ancient fountain of Maggiore and admire the ornate Church of San Bernardino. In the Chapel of San Severo, lovers of painting and the fine arts will find a fresco that was alternately painted by Raphael and Perugino. This quiet and picturesque Italian town annually attracts a huge number of guests wishing to join the local history. 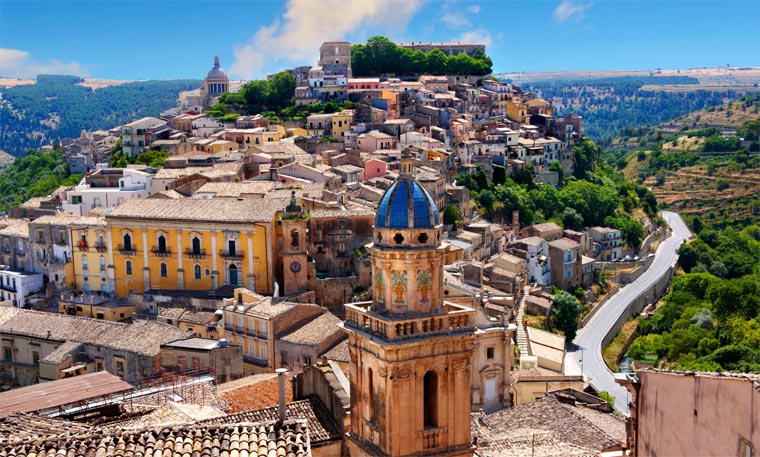 Sunny Sicily has always attracted tourists with its friendly weather and beautiful views. It is worth noting that the nature on this island has really tried its best, creating a unique place. The beautiful green hills, the river terraces and the harmonious stone buildings in the “Sicilian Baroque” style make Ragusa one of the most beautiful cities in Italy. Most of the local cultural and historical monuments are various churches. The most important are the Cathedral of San Giorgio, the Cathedral of San Giovanni Battista and the Church of San Francesco all’Immacolata. These are truly majestic structures that are steeped in the spirit of antiquity and inspire respect for all who approach them. Despite the rapid industrial development, this small town carefully preserves and protects its rich past.

I didn’t want to conclude the list of the most beautiful cities in Italy without mentioning Urbino. It is spread out among picturesque green hills and mountains. This city dates back to the Renaissance, so its cultural heritage cannot fail to impress. The city’s churches were painted by such great masters as Raphael and Uccello, and are a great source of inspiration for lovers of painting and sculpture. In this respect, the local Cathedral, which boasts a rich collection of works by great painters, is particularly notable. The mastery of ancient architects and painters can also be seen in the churches of San Domenico and San Spirito. The Castle of the Dukes of Urbino, a monumental structure that now houses the National Gallery of the Marche, is the crowning jewel of Renaissance architecture. It is no coincidence that this building was included in the list of world cultural heritage of UNESCO.