The Gambia: The Abuko Reserve

Friendly, sun-drenched and peaceful The Gambia is relatively close to Europe and its seaside resorts around Banjul are ideal for relaxing on the beach or by the pool. Not surprisingly, The Gambia is increasingly chosen by people planning winter vacations who don’t want to spend their vacation skiing on snowy slopes. If you like adventure, head inland for the more classic landscapes of the West African region, or take a cruise on the Gambia River to see chimpanzees playing on the banks or hippos idling in the shallows.

History and monument lovers will appreciate the opportunity to visit the island of Kunta Kinteh, where there are the ruins of a 17th-century fort. The Gambia is also one of the favorite places of birdwatchers, who are particularly fond of Bao Bolon Wetland Reserve. These vast wetlands are home to a huge number of bird species, which can be freely observed in their natural habitat.

People visiting The Gambia for the first time are sure to find many things to delight them and encourage them to plan their next trip. For some it will be a chance to experience the magical world of birds, for some it will be a chance to bum around on the golden sandy beaches where there are no crowds yet, for some it will be the beautiful local culture and unique atmosphere. And although The Gambia is the smallest country in continental Africa in terms of the number of tourist attractions and places to visit, it is not inferior to its neighbors . The Gambia is undoubtedly one of the most interesting and diverse destinations on the continent. 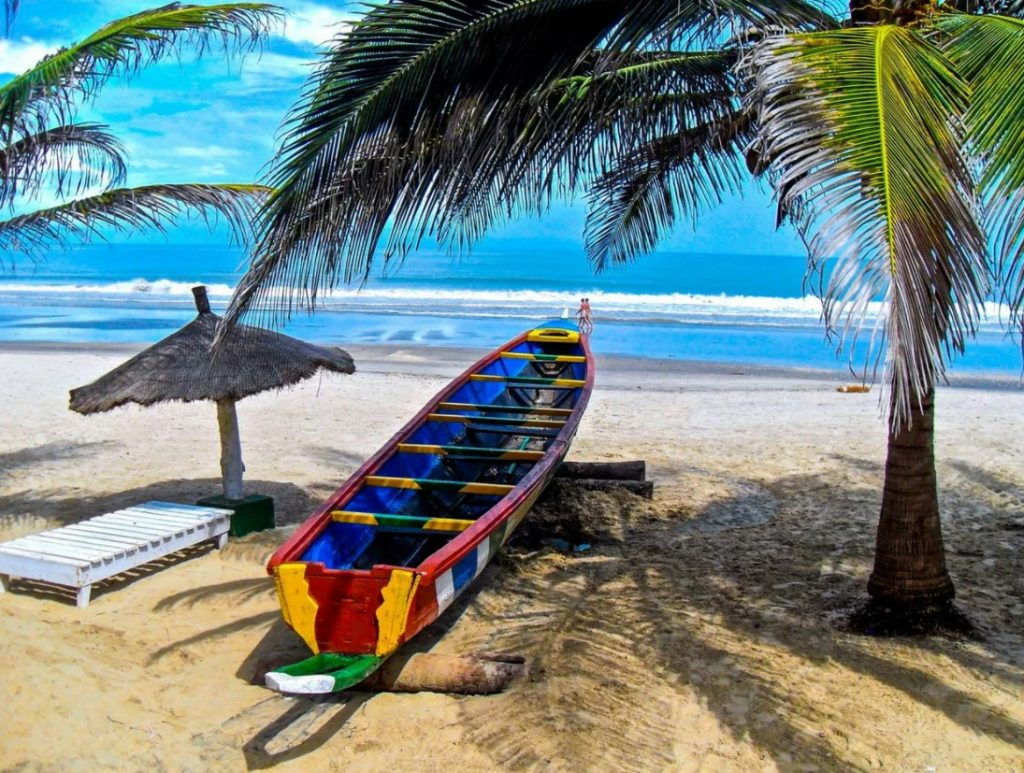 The Gambia: The Abuko Reserve

Abuko is unique compared to other reserves on the African continent in many ways . First, it is tiny because The Gambia is also a small country, so it is easy to get to no matter where exactly the hotel is located. In addition, it is as easy to get around the park area as it is to get around the whole country. However, the small size does not mean that there is nothing to admire there. With an amazing variety of plants and animals, this well-managed preserve is one of the best places to watch birds in the region. It is estimated to be home to more than 250 species of birds, including some very rare ones. The reserve covers 106 hectares, and well-maintained trails lead visitors to places worth visiting.

There are 52 species of mammals, including the South Sahara canine, dudger, porcupine, gallago, and marmot. It is also home to three species of monkeys: the sea bream, the endangered red gerezan and the red pats. Nile crocodiles and venomous species, including pythons, hissing vipers, green mambas, spitting cobras and black and white cobras, are particularly famous inhabitants of the Abuco Reserve . Among the many bird species that inhabit the small area of the reserve are quail hawks, black-headed wolves, and gray wolves. Abuko is the only place in The Gambia where you can see green and long-tailed aurochs, pearl and black-headed flapper. 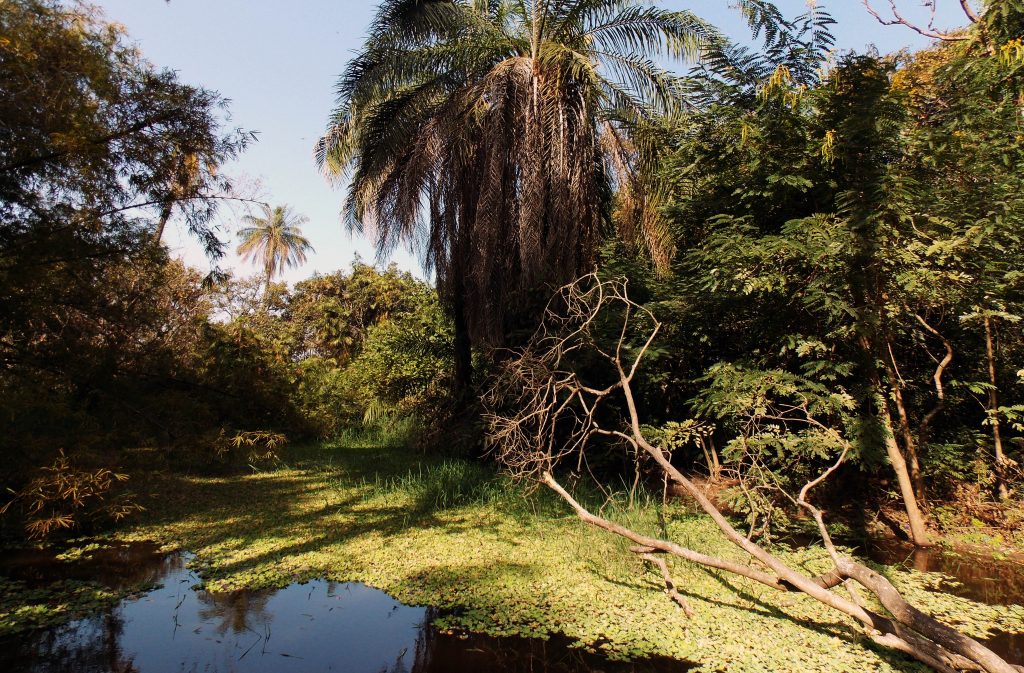 Makasutu on Mandinka means “sacred forest,” and it is a unique place both culturally and in terms of nature. The project originated in the early 1990s, when two Englishmen decided to buy the surrounding land in order to restore the nature destroyed by the forest. After restoring the forest cover, they created the reserve, which is now open to the public. It is an extraordinary place, combining a variety of landscapes and covering as many as five African ecosystems in an area of several hundred hectares. In this small area you can observe savannah, gallery forest, mangrove forest, palm forest and swamps, as well as meet many different animals including baboons, giant lizards and waterfowl. The region is inhabited by the Mandinka tribe, whose traditions and history can be learned during a visit to the reserve.

Two huge mountain goats among the swirling waves, a blue lion and a blacksmith in love are just some of the amazing creations waiting for tourists arriving in the village of Kubuneh, just a few kilometers from the Makasutu Cultural Forest. The simple homes of the African settlement have been transformed by an international group of talented artists into a surprising and thought-provoking collection of street art. Their works have brought a touch of surreal beauty to this corner of West Africa. The idea for this art installation was born in 2009, when Lawrence Williams, one of the founders of Makasutu, began working with a Gambian artist to create murals that adorn the space on the edge of the reserve.

READ
Where to go in Sicily, Italy in the fall? 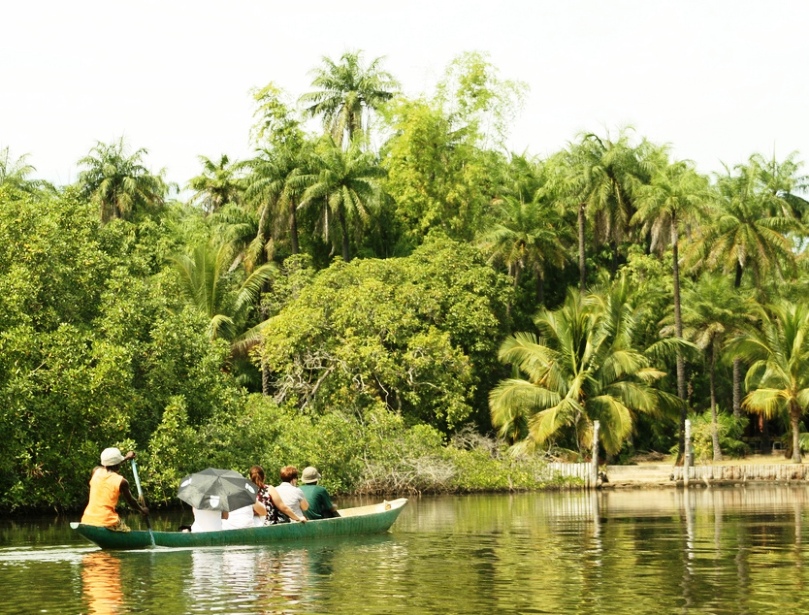 In the late 1980s, a chimpanzee rehabilitation center was opened in the heart of Gambia National Park, which includes the Baboon Islands archipelago. It is one of the most important nature reserves in the country. The area of the park is closed to visitors, even park staff are not allowed on the islands, but the nearby towns of Kuntaour and Janjanbureh organize boat trips on the Gambia River around the archipelago islands, where you can admire these remarkable mammals in their natural habitat. In addition to chimpanzees, the park area is also home to other wild animals, including hippos, manatees, crocodiles, and various species of birds. Experienced guides will tell you the history of the reserve’s creation and introduce you to the life and nature of the monkeys.

For many tourists the reason to visit The Gambia is the local beaches, and it is not surprising, because there are many of them. So, a visit to interesting places can be combined with a lazy vacation at one of the luxurious seaside resorts. The main advantage of The Gambia is a small territory, which allows you to move around the different regions. During a vacation in The Gambia it is impossible to get bored, because this smallest country in Africa has a lot to offer. 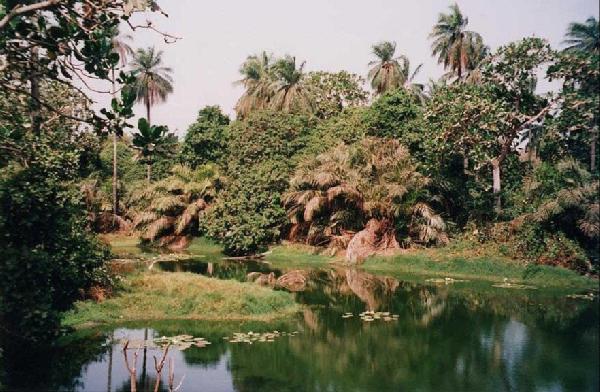 Abuko Nature Reserve is the most famous nature reserve in the West African state of The Gambia with an area of approximately 102 hectares.

Established in 1968, the reserve is about three kilometers south of Combo St. Mary in the West Coast region, and is easily accessible by the South Bank Road, which continues south to Brikama. It is about twenty kilometers south of downtown Serecunda, not far from the Abuco site. The site is almost rectangular in plan and runs southwest from the entrance to Banjul International Airport.

A large nature reserve of about one hundred hectares (data vary) is located on either side of the banks of the small Lamine Bolong River, which is a tributary of the Gambia River. Through several smaller dams, thus forming ponds, it flows in a northeasterly direction toward the mangroves. Because of the periods of the year, between the rainy season and the dry season, the size of the lamina also varies. During the dry season, the riverbed dries up completely, and Bambo Pool (Bambo means “crocodile” in Mandinka) pond loses a large surface area.

The nature reserve can only be explored on foot; There are several observation decks along the marked route, about three kilometers long, where you can observe and photograph the animals in peace and quiet.

The reserve was created at the source of the Abuco, which later becomes the small Lamin River. Thanks to a fence for water extraction in 1916, the gallery forest became denser and game numbers increased markedly. Local residents secretly took advantage of the site and gained access through the fence. They grazed their cattle, made palm wine and poached. When a big cat joined the hunt in 1967, the locals hoped for help from forester Eddie Brewer. The official inspected the site on site and was thrilled to find this patch of rainforest in the surrounding savannah landscape.

In March 1968, with the support of Brewer, who was later appointed director of conservation, the Gambian government effectively classified the site as a reserve. In 1978, the area was expanded from 73 hectares to 102 hectares and with the help of the international conservation organization World Wildlife Fund (WWF), the park was fenced off with a fence up to three meters high.

The fence was renewed in 2007 with an investment of 8.9 million dalasi (about 254,000 euros). In the past, animals have fled the area and have been seen in nearby areas.

READ
6 tips on what not to miss in Sri Lanka

The flora consists of a typical savanna landscape and gallery forest, which makes up one third of the area. The preserve is the most botanically extensive example in the entire country. Typical trees growing up to thirty meters are the African oil palm (Elaeis guineensis), the African redwood (Khaya senegalensis), the thali (Erythrophleum guineense), the iroko (Chlorophora regia) and Anthocleista djalonensis. Liana (Saba senegalensis) covered the dead trees with a dense green carpet. Mandinka call them Kaba, and their fruits are edible.

There are several aviaries at one end of the site that serve as shelters for animals in need. Among them is an aviary that houses a pack of hyenas (Crocuta crocuta). They are fed for the visitor, after which they have to fight the vultures for their prey. In another aviary you can see lions up close, but there are no more of them in the wild in The Gambia. Chimpanzees, formerly bred in the reserve, are now released into the wild on Babouin Island. You can also see bushbucks, various kinds of monkeys, and turtles.

In the sanctuary itself, you will often see monkeys such as monkey marmosets and pasque macaques. Porcupines, bushbuck (Tragelaphus scriptus), duikers, galago (Galago senegalensis) and Nile crocodiles (Crocodylus niloticus) and several species of snakes are also found.

The Abuco Preserve is a major attraction for tourists. Of the more than 100,000 tourists entering the country each year, about one-third also visit this reserve. A moderate entrance fee is required to enter the reserve with a substantial discount for the local population.

At the Darwin Field Station, about 300 meters from the entrance, the reserve has a small natural history exhibit. The building was completely renovated in 2004 after the more than 30-year-old building needed repeated repairs. The building is also the headquarters of the Makasutu Wildlife Foundation.

The reserve, with its Darwin Field Station, is also the destination for numerous local school classes. Gambian youth are taught how important conservation is.

The 1989 BBC documentary Pearl in the Sun (German title: Das Juwel in der Savannah) focuses on the flora and fauna of The Gambia and, for the most part, the Abouko Reserve in a 30-minute compilation.