Puerta del Sol (Puerta del Sol) is Madrid’s main square, which is important not only for tourists, but also for locals. Here are the iconic landmarks and symbols of the city associated with its history. 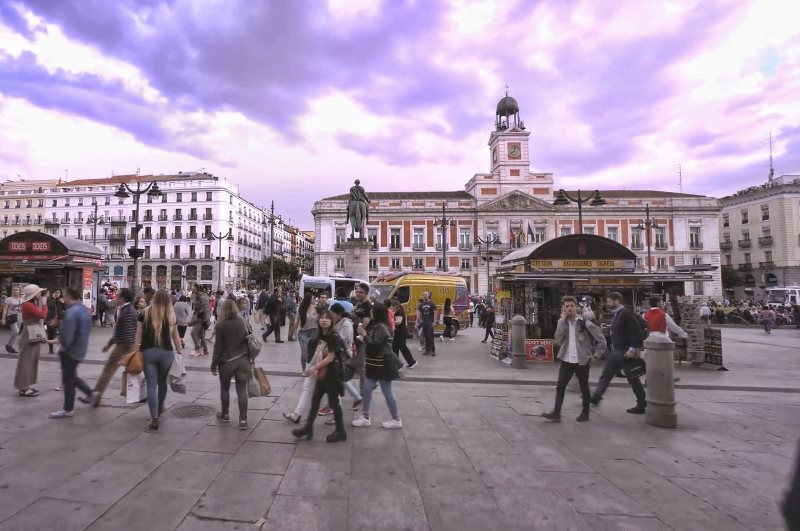 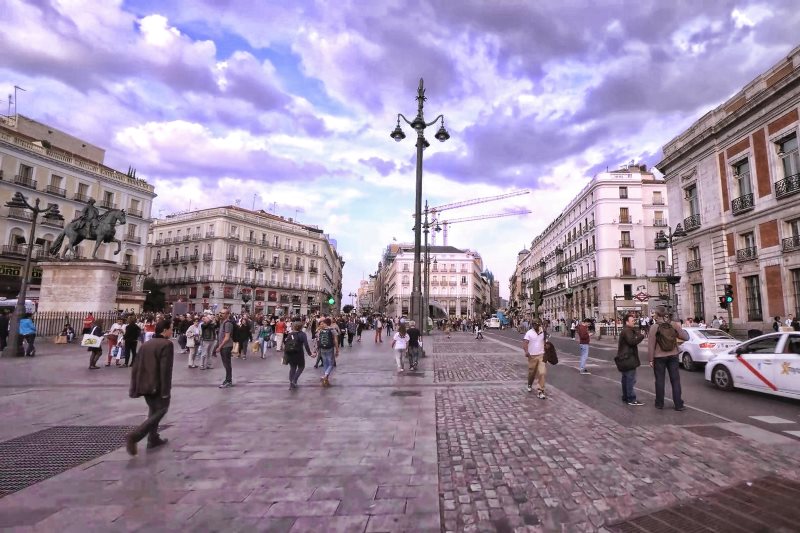 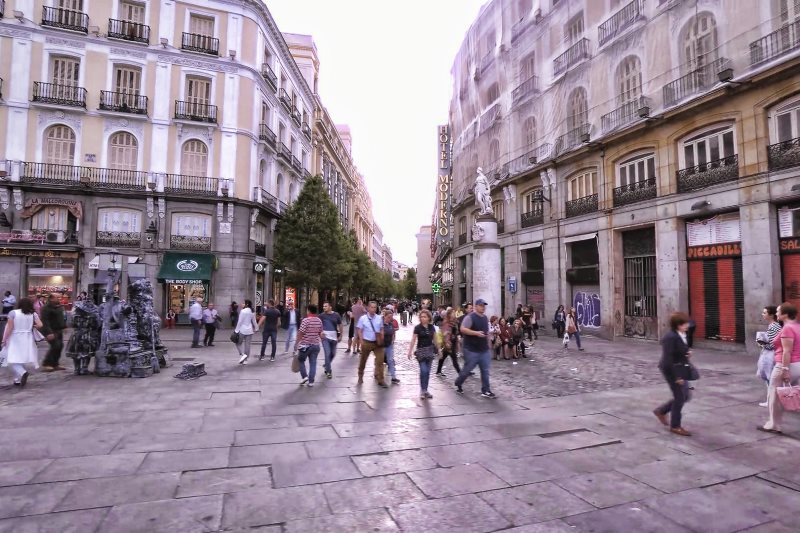 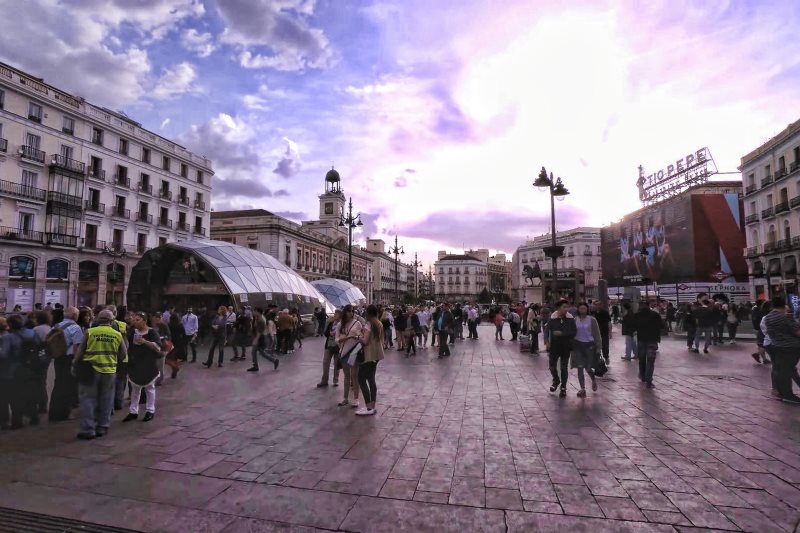 Description and history of Puerta del Sol in Madrid

This lively square in Madrid is just a short walk from the equally famous Plaza Mayor. Originally, Puerta del Sol was a section of the city gate that stood to the east and was decorated with an image of the sun. Hence the square’s generally unique name: Puerta – gate, Sol – sun (usually plazas in Spain are called Plaza, not Puerta) . The fortress was destroyed back in 1570 because of the need to expand the city, but the name Puerta del Sol has been preserved to this day.

Puerta del Sol got its current appearance during the reconstruction made between 1854 and 1860. The famous Spanish architects of that time Lucio del Valle, Juan Rivera and Jose Morer designed the project according to which the architectural ensemble of the square should appear in the form of a crescent. To achieve this, the Post House was extensively reconstructed and residential buildings with identical facades were built, defining a semicircular space. The architects also decided to demolish some buildings, in particular the convent of San Felipe and the convent of Our Lady of Victory, in order to realize the project.

Now Puerta del Sol is the central square in Madrid, where the citizens meet the New Year and other holidays. Also Puerta del Sol was and is one of the main centers of public transport in the city. Here drove the first car in Madrid, and here October 17, 1919 was opened the first subway line. Nowadays there is a multimodal station under the Puerta del Sol which connects the commuter trains and the RENFE rail network. 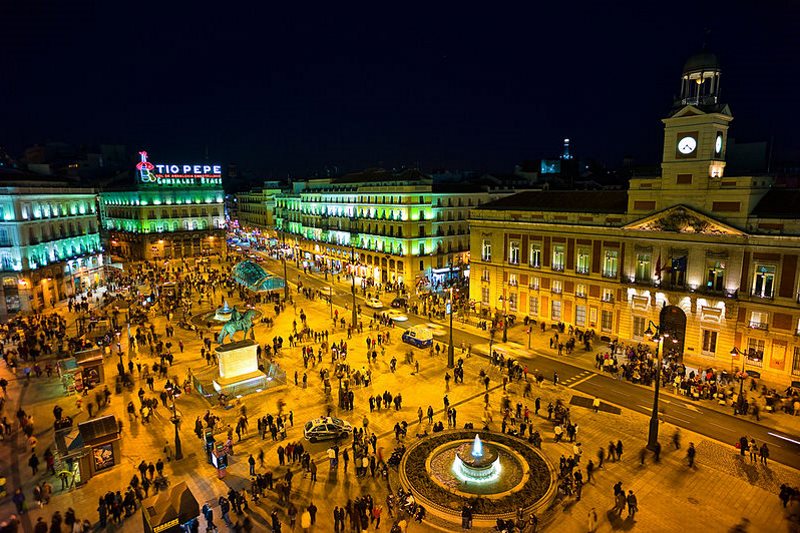 Puerta del Sol in Madrid: what to see

In the Puerta del Sol, it is worth paying attention to several iconic landmarks that adorn the city. Among them are the Post House, Kilometer Zero, the Bear and the Strawberry Tree, the Statue of Charles III, and the Statue of Mariblanca.

La Casa de Correos (House of the Post) was built in 1768; it is the oldest and most prominent building on the Puerta del Sol. It was originally built for the postal service, but now serves as the office of the Presidency of the Community of Madrid.

The tower of the building is decorated by an ancient clock opened in 1866 by Queen Isabel II. In addition, it is associated with a very important Spanish tradition – on December 31 the chime of this clock informs the country of the beginning of the New Year. Celebrants gather on the Puerta del Sol, and during the chime of the clock they eat twelve grapes for the fulfillment of a wish. That is why the Post House has a special meaning for the Spaniards.

Puerta del Sol is the central square of Madrid. It has a “zero point”, the place from which the counting of road distances in Spain begins, and there is also a sculpture “The Bear and the Strawberry Tree”, the symbol of the capital. 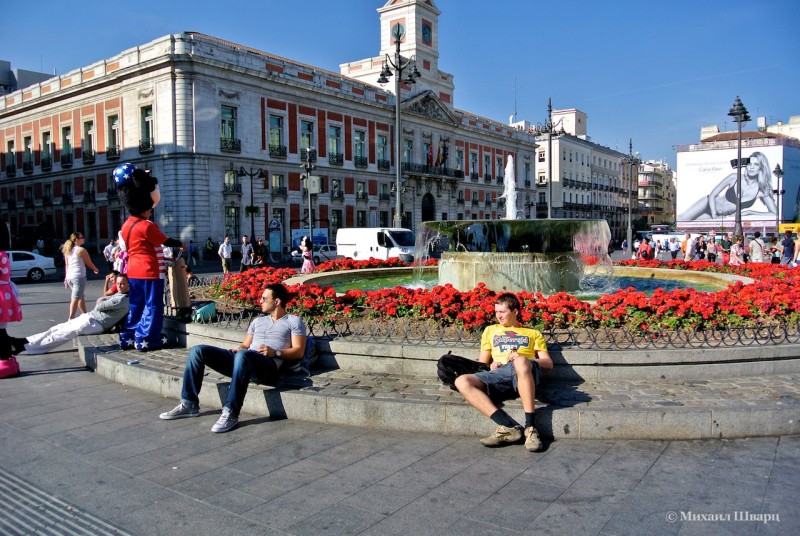 Puerta del Sol Square, with the Post House in the background

“The heart” of Madrid is called Puerta del Sol (Puerta del Sol) square, which means “Gate of the Sun” in Spanish. Once here really stood the Sun Gate, they were part of the fortress wall. They were torn down by order of the Spanish King Carlos I back in 1521. 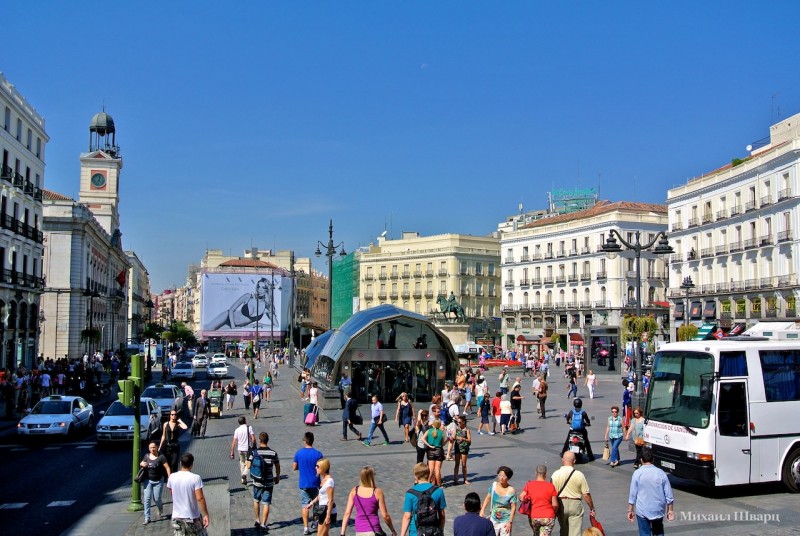 Today, Puerta del Sol is a semi-circular plaza where Madrid’s three main streets (Mallor, Alcala, San Jerónimo) and several smaller ones converge. This is one of the main hubs of public transport in the city.

In the square itself and the surrounding streets you’ll find many stores and souvenir stalls, restaurants and cafes, as well as grocery stores with traditional Spanish delicacies. Puerta del Sol is a favorite strollers for tourists and locals. In the evenings the square is illuminated by 300 lights which makes it especially beautiful. 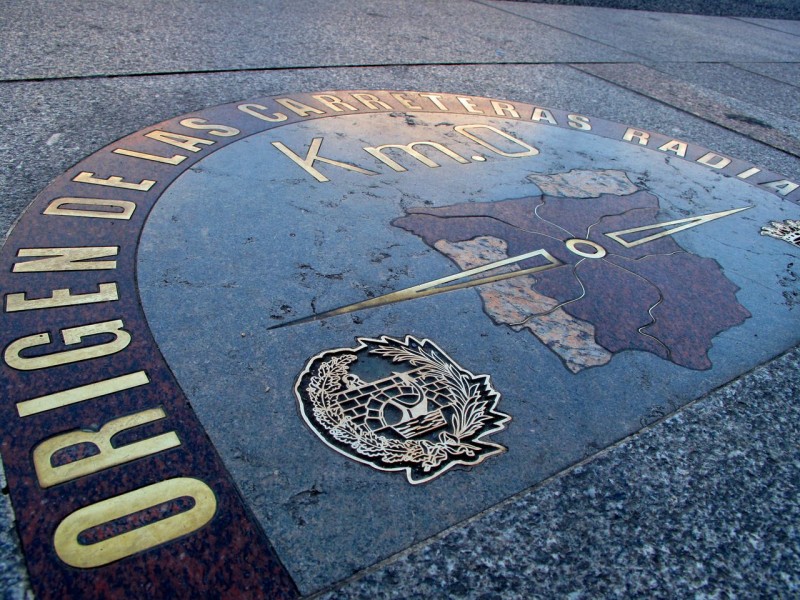 For a long time Puerta del Sol was considered the geographical center of Spain. Here is the famous “zero point” – the place from which all roads in Spain begin – “kilómetro cero”. The zero point is a bronze plate with the inscription “Km 0” embedded in the sidewalk of the former “Casa de Correos”, which once housed Madrid’s main post office. They say that when you step on this “zero point”, you should make a wish – it will surely come true! 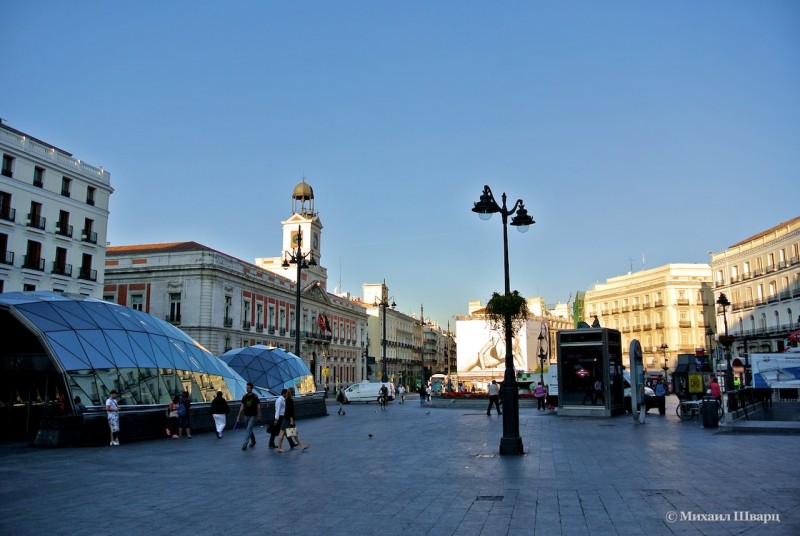 The building of the former House of the Post

The grandiose former Post Office building (built in 1761), which now houses the Government of the Autonomous Region of Madrid, has a tower with a ball. It has an antique clock, which until then belonged to the Buen Suceso Church. It means as much to Spaniards as the Kremlin chimes to the inhabitants of Russia. This is the main clock in Spain – they announce the arrival of the New Year. 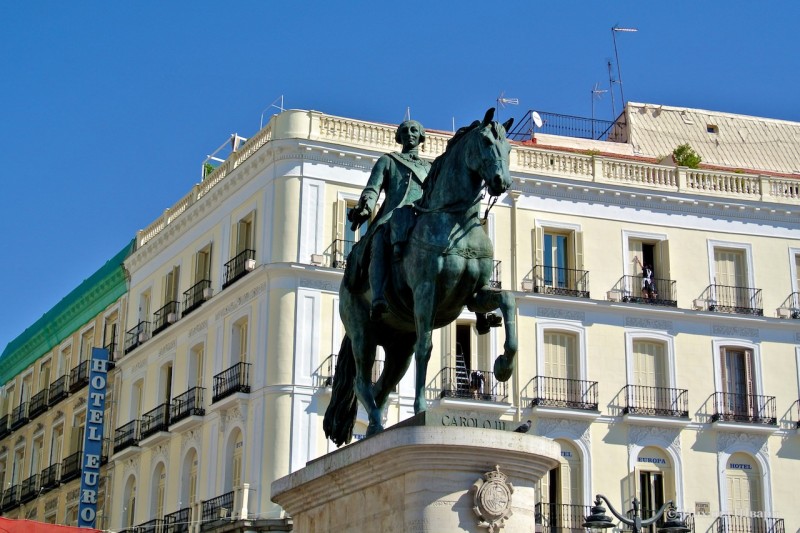 In the center of the square is a bronze equestrian statue of King Carlos III. This nine-meter monument was erected here in 1994.

The Bear and the Strawberry Tree 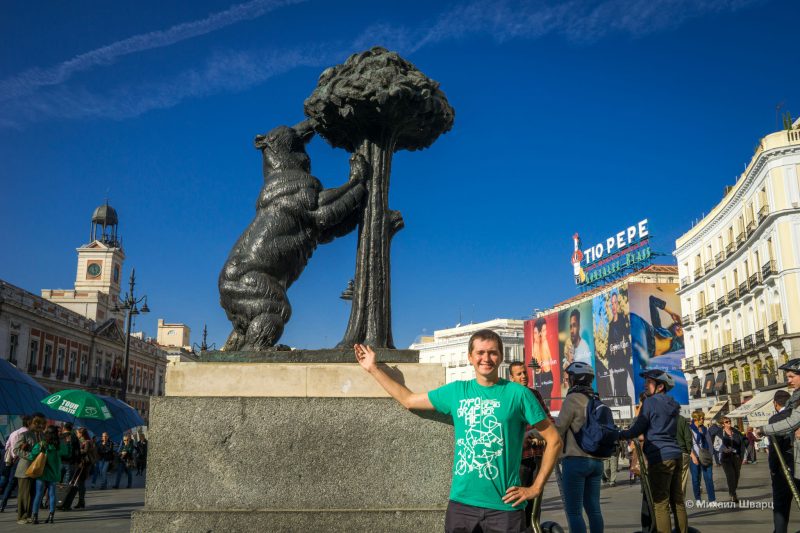 The Bear and the Strawberry Tree

Another monument on the Puerta del Sol Square, the Bear with a Strawberry Tree (madroño), appeared in the 11th century. There is no exact information about the origin of the statue. It is believed that the bear symbolizes the mountains, and the tree represents pastures. Now it has become an official symbol of Madrid and adorns its coat of arms, as well as being used in many souvenirs. The place near the monument has become a traditional meeting place for lovers.

On the Puerta del Sol in 1830, the first gas lanterns in Madrid were lit. They were replaced by electric ones in 1878. The first horse and streetcar routes also ran through the square. It is also where the first subway station, the Sol, opened in 1919. 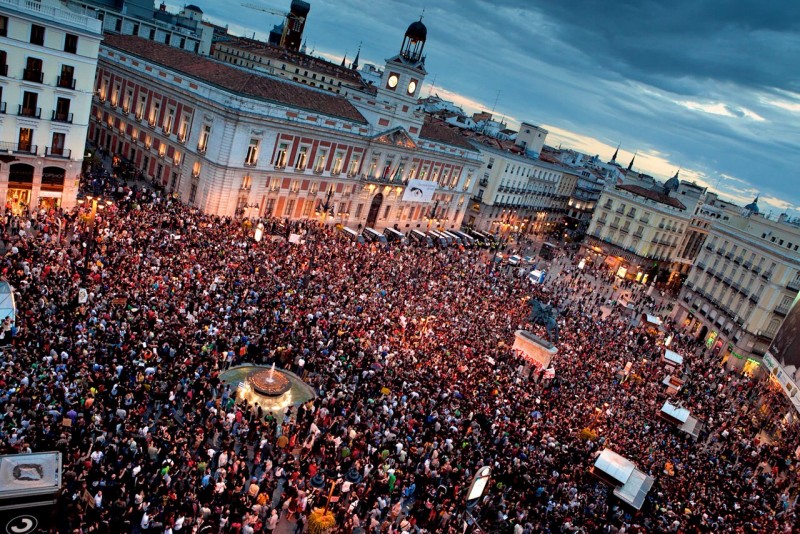 Puerta del Sol has seen a lot of turmoil in its lifetime. In 1808 it was here that the uprising against Napoleon broke out and the First Spanish Revolution began. The “Constitution of Cadiz” of 1812 was solemnly proclaimed in the square, which in 1814 was solemnly burned here. The Spanish Republic was proclaimed from the balcony of the Ministry of the Interior (which was then located in the “Post House”) on April 14th, 1931 (it fell in 1939).

And many more historically significant moments saw this ancient square. There is a memorial plaque to the tragic event of the terrorist attack in 2004, the most barbarous in Spanish history (the explosions in the trains killed 192 people).

Puerta del Sol has been rebuilt many times. From 1860 to 1868, old buildings were torn down and rebuilt houses, which stand on the square to this day. The square got its current appearance after the 1984-1986 reconstruction.

How do I get to Puerta del Sol?