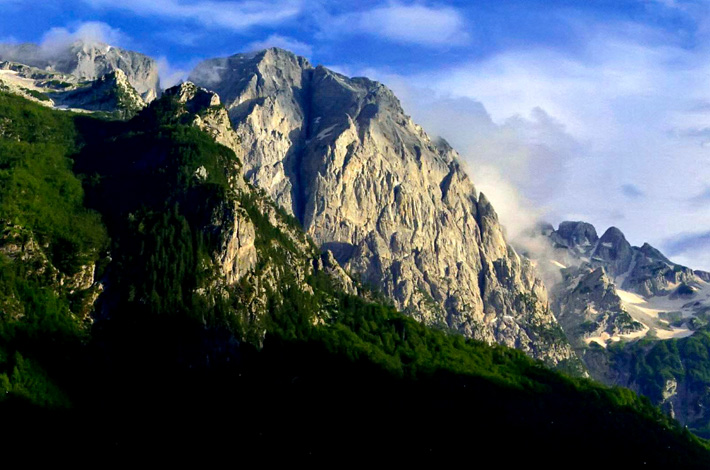 In the photo, Prokletiye is the highest peaks of the Dinaric Plateau. The name sounding terrifying enough corresponds to the appearance of these dark rocks and the legends that surround these places since ancient times.

The Dinaric highlands is the common name for a group of mountain ranges and massifs on the Balkan Peninsula. In the west, abruptly breaking towards the Adriatic Sea, they stretch along the coast of Croatia, Montenegro and northwestern Albania – from the southern foothills of the Julian Alps in the north to the Drin River valley in the south. In the east, the highlands extend to the Middle Danube (Pannonian) Plain and the Ibar River valley, occupying the inland territories of Slovenia, Bosnia and Herzegovina, Serbia and the partially recognized Republic of Kosovo.

The northwestern part of the Dinaric highlands is coastal and the highest. The Dinaric Plateau consists of plateaus separated by mountain ranges and deep gorges of the Neretva, Vrbas and Tara rivers, mostly stretching from northwest to southeast. In its middle course Tara forms the deepest (up to 1300 m) canyon in Europe and 82 km long, which is included in the UNESCO World Heritage List as part of the National Park Durmitor. The highest ranges are Snežnik, Velebit, Dinara, Čvrsnica, Durmitor and Prokletie, where is the highest point of the plateau – mountain Jezerza. Above 2000 m the mountains show the traces of ancient glaciation.

The plateaus are mostly formed by limestone, it is a classic area of karst in all its diversity: plains-fields (there are about 130 of them, the largest is Livanesko Polje, 405 km 2 ), sinkholes, sinkholes (such as Rysnik, up to 80 m deep), karst fields, disappearing rivers and caves. The name “karst” comes from the limestone Karst Plateau in Slovenia and the eastern tip of Italy with heights of about 600 m.

The eastern highlands are an area of shale, sandstone, volcanic and ancient crystalline rocks. The local mountain ranges – Romania, Javor and Zlatibor – are separated by a set of intra-mountain basins (the largest – Sarajevo and Kosovo Pole) and relatively wide valleys of the Bosna, Drina and West Morava rivers with numerous tributaries.

Tectonically, the Dinaric Plateau corresponds to the Dinaric folded system (Dinarides) of the Alpine-Himalayan moving belt. Dinaric highlands – a zone of high seismicity, the most catastrophic earthquakes of modern times took place in 1963, 1969 and 1979.

The ridges of the Dinaric highlands are an area of hundreds of rivers and lakes with many waterfalls and rapids. 75% of the rivers belong to the Black Sea basin. The largest is the Sava, the longest tributary of the Danube, flowing for 1005 km before flowing into it near Belgrade, Serbia. 25% of the rivers belong to the Adriatic basin, the longest being the Drina (160 km). The rivers of this basin are immeasurably shorter, as they flow through areas of developed karst, and water actively escapes into underground cavities. For the same reason they are crystal clear, they have a lot of fish. Most rivers can not navigate, except for a few, and that in the lower reaches. Many of them have hydropower plants, and quite large ones at that.

In the mountains there is the most extensive network of underground rivers in Europe. The longest is the Trebišnica (total length – 187 km, underground – 89 km). The River Reka is no less famous: it goes underground in the Škocjanska Caves, a UNESCO World Heritage Site, and runs for 34 km underground. Pivka River flows in the deep Slovenian caves of Postojnska Jama.

There are more than 200 lakes in the uplands, all of them of different origin: karstic, tectonic, glacial, travertine lakes. The area of most of them does not exceed 10 km 2 .

The natural isolation of certain areas of the highlands has greatly contributed to the emergence of many state formations.

Travertine lakes are formed as a result of the accumulation of marl in river beds, the largest being the Plitvice Lakes. They are the main natural object of the Plitvice Lakes National Park. Lake Shkoder – a former gulf of the Adriatic Sea and the largest lake of the Balkan Peninsula (area 391 km 2, depth 44 m) – of mixed karst-tectonic origin. On the karst plateau there is the famous “pulsating” Lake Zerknica, which changes its area depending on the season.

The uniqueness of the Dinaric Plateau as a natural object is that this is one of the few places in Europe, where significant areas of natural forest have survived.

In the lower part of the seaside slopes – the Mediterranean shrub thickets (macaws and frigana). In the interior – mountain steppes and treeless karst heaths. In the east, the lowlands are broad-leaved forests dominated by oak, beech, hornbeam, ash and chestnut, and above 1200-1500 m they are replaced by coniferous forests of spruce and pine.

The dense forests and canyons with rivers are home to many species of animals, including brown bear, lynx, roe deer and chamois. A large variety of rare species of birds: Griffon Vulture, peregrine falcon, and Siberian Grouse. There are huge colonies of hand-wings in the caves: Common longwing, lesser horseshoe bat, snub-nosed long-eared bat.

The Greeks tried to gain a foothold on its banks, but were forced to fight the Illyrians and then yield to the Romans, who took all Illyria in the Third Macedonian War (171-168 BC).

Then for centuries the Drina River was the natural border between the Western Roman and Eastern Roman empires, which later made it also the border between the Orthodox and Catholic worlds. And in combination with Islam, imposed during the Ottoman period, such a boundary still largely determines the relationship of entire countries and peoples along the banks of the Drina.

After the Battle of Kosovo in 1389, the Ottoman Empire permanently established itself in this part of Europe. At the beginning of the 19th century, Austria strengthened its position on the Adriatic coast by taking over Dalmatia and incorporating it into the Austrian Empire.

By the mid-19th century, about half the population of the highlands were Muslim, a quarter were Catholics, and a quarter were Orthodox. The tensions between the Serbs and the Austrians led to the assassination of Archduke Franz Ferdinand in Sarajevo on June 28, 1914, and the beginning of World War I. It resulted in the dissolution of the Austro-Hungarian Empire, the elimination of the Ottoman Empire, and the formation of several states in the highlands.

World War II broke out, and in 1941 Germany and Italy invaded Yugoslavia, causing enormous civilian casualties and large-scale guerrilla warfare. After half a century of peace, Yugoslavia fell apart, leading to a series of Balkan wars between 1991 and 2001 and acts of ethnic and religious genocide.

By now, the wounds have healed, the coast and mountains have become a tourist paradise, and life has steadily improved for the local population.

READ
Paris is the city of lovers, France