This is a great way to visit the St. Andrew’s Cathedral (Italy, Amalfi). It is absolutely unique in its significance as a cathedral that brings together pilgrims from all over the Orthodox world.

So, I hope I am prepared a little and ready to leave my review of such a “complex” cathedral, as the Cathedral of St. Andrew, which is located in Italy, in the city of Amalfi. It’s complicated for me because I’ve always wanted to see it and to stand next to the relics of St. Andrew. They say that once a year his relics are taken out of the temple, and everyone can touch them, but the information about this action on the Internet, I have not found, and the opportunity to coincide our trip to Italy to this date, we have not.

Before moving on to the story of the cathedral itself, I want to give some information about the saint, whose relics are at rest there. So, the Apostle Andrew was the first disciple of Christ and that’s why later he was called Andrew the First-Called. By the way, while I was looking for information about him, I found out that since he was crucified on an oblique cross, that’s where the name Andrew’s Cross (and then the Andreev’s flag) came from.

It is believed that the Apostle Andrew himself was never in Amalfi. He died in the Greek city of Patras, but during the Crusader invasion some of his relics were stolen (13th century) and brought to Italy, to a town near Naples – Amalfi. In those days, this city was the capital of the Duchy of Amalfi, which was in contention for the title of major maritime power in the Western Mediterranean.

It is believed that not all of St. Andrew’s relics are kept in the Amalfi Cathedral: his head rests in Greek Patras (it did not return there until 1964) – although I read somewhere that part of his head is kept in the Vatican, his feet – in Athos, and his right hand, called the right hand, in Moscow, in the Cathedral of the Epiphany.

READ
Samarkand - the Heart of Uzbekistan

And now turning to the story of the cathedral itself. It is built in the Norman-Byzantine style (as they say, the rarest). The building is very beautiful, interesting not only because of the stairs (62 steps) leading upward, but also because of the beautiful mosaic frescoes, which sparkle in the sun 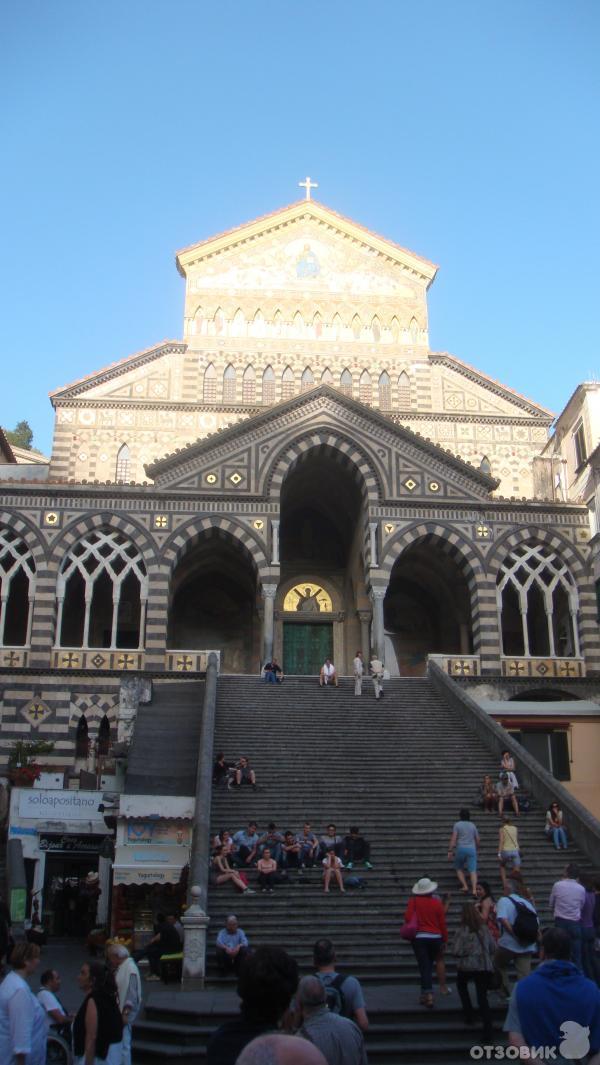 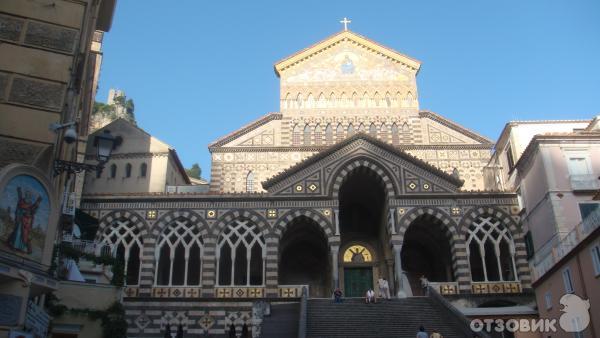 Frescoes of the 12 apostles 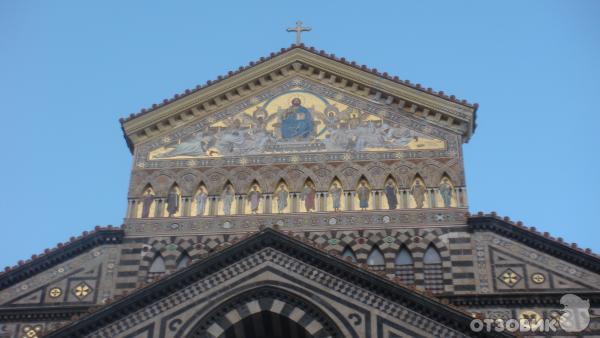 The cathedral was built in the 9th century, later complemented by separate additions, and in particular the beautiful bell tower, visible from anywhere in the city and, of course, from the sea. 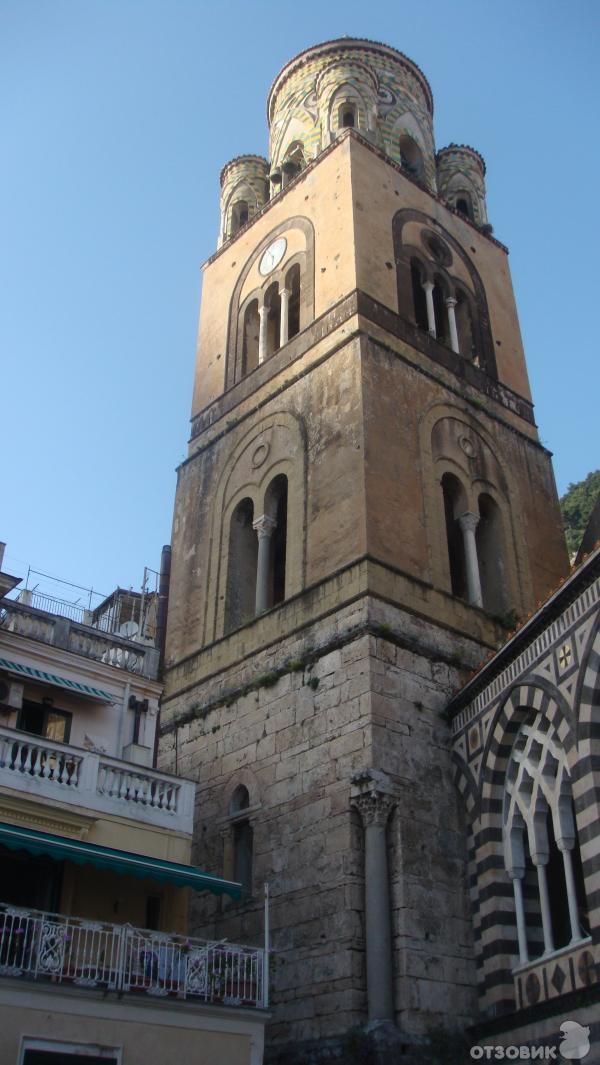 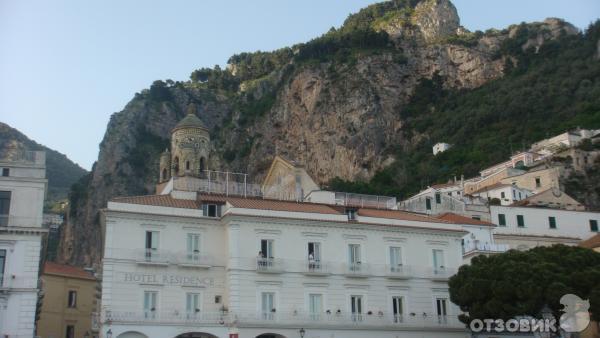 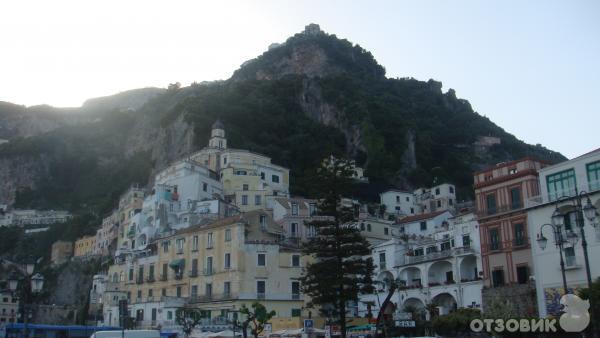 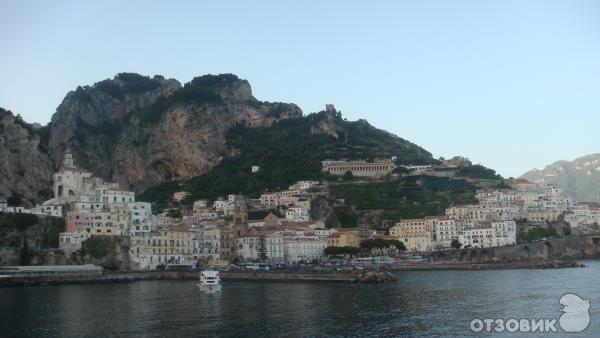 The facade of the cathedral was badly damaged in an earthquake in 1891, so what we see now is a reconstructed copy.

Above the entrance to the cathedral the mosaic of the Apostle Andrew draws attention. 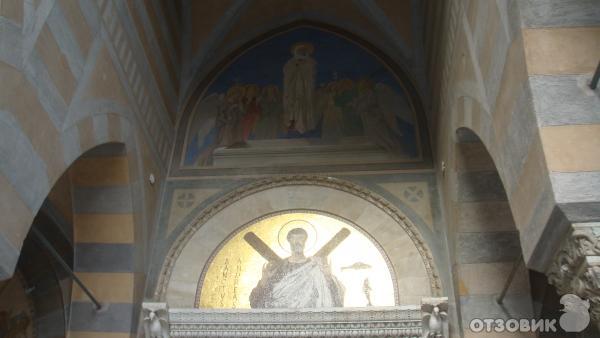 Going up the steps, there is a fancy colonnade to the left and right. 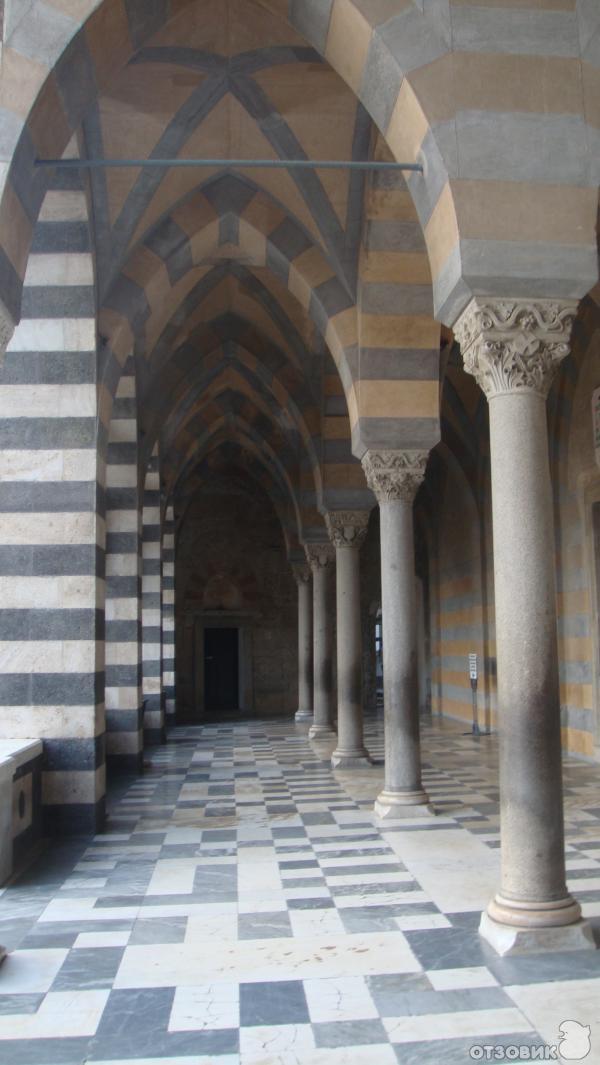 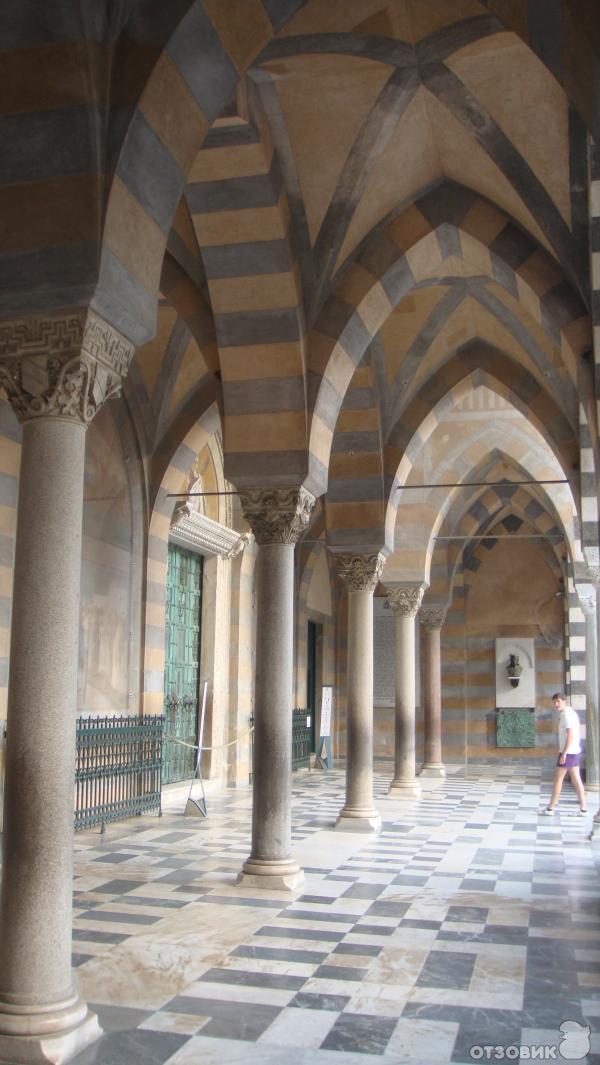 So, we go inside. 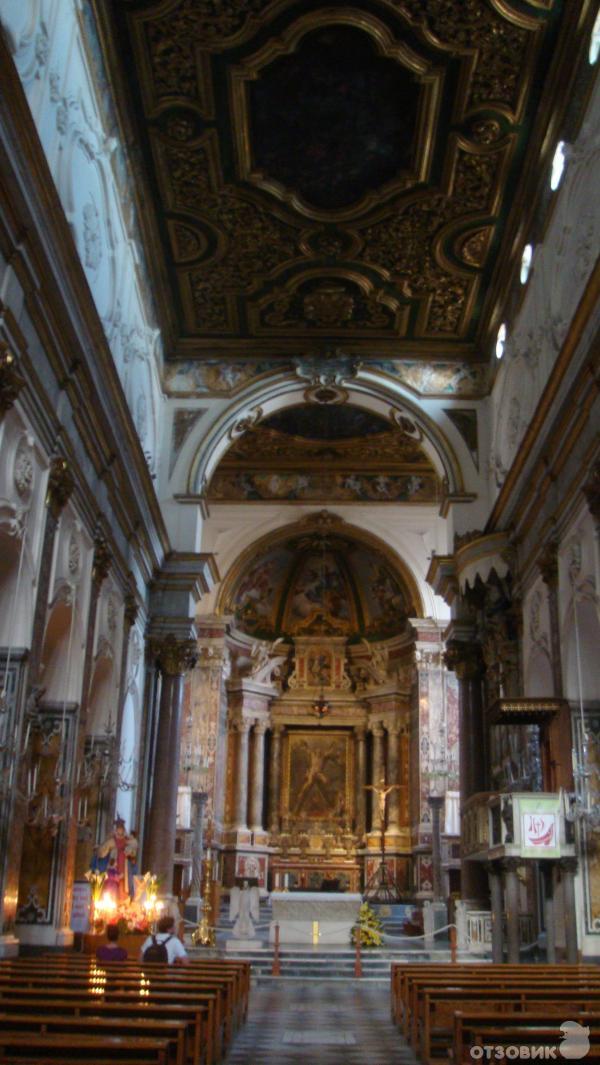 Surprisingly, whether we were in the cathedral late, but in the evening there were very few people, you could say, almost no one. 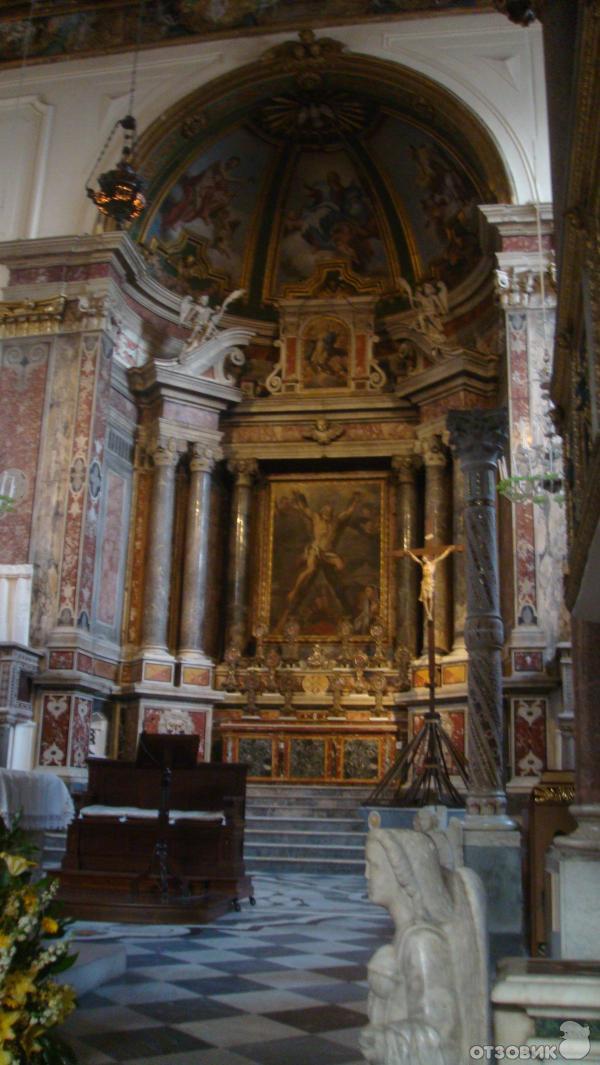 I took a few pictures, we were tired, so I took them on the move.

But in general I started a little wrong. In fact, first we get to the ancient basilica of the cathedral (belongs to 9th century), which is called the Basilica of the Crucifixion. Now there’s something like a small museum set up here. 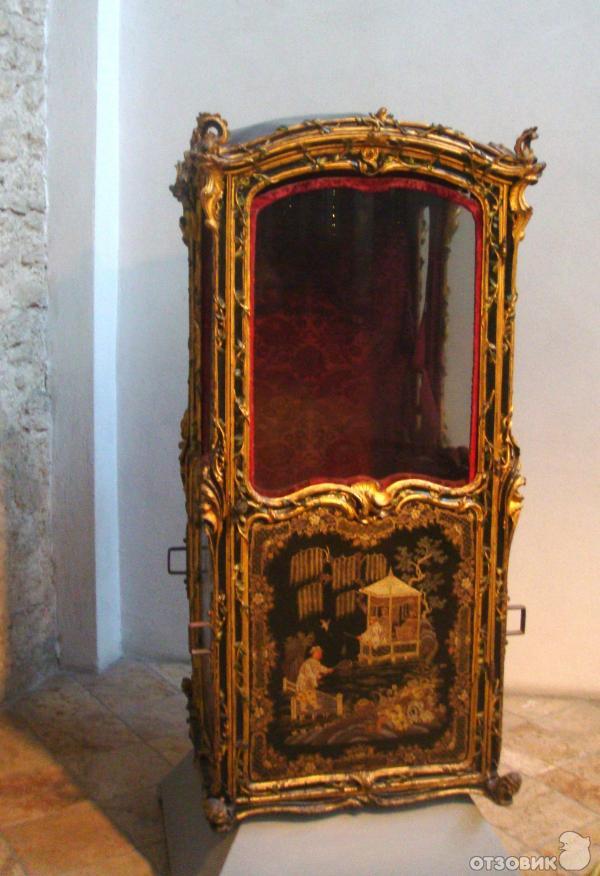 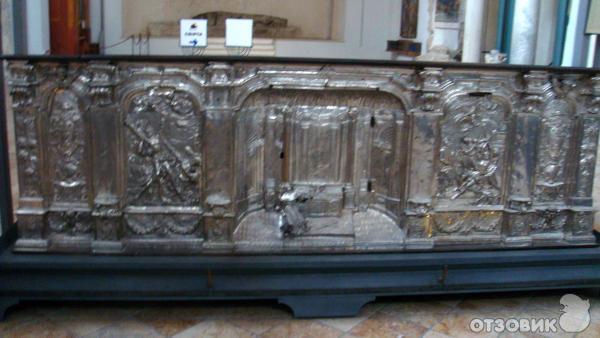 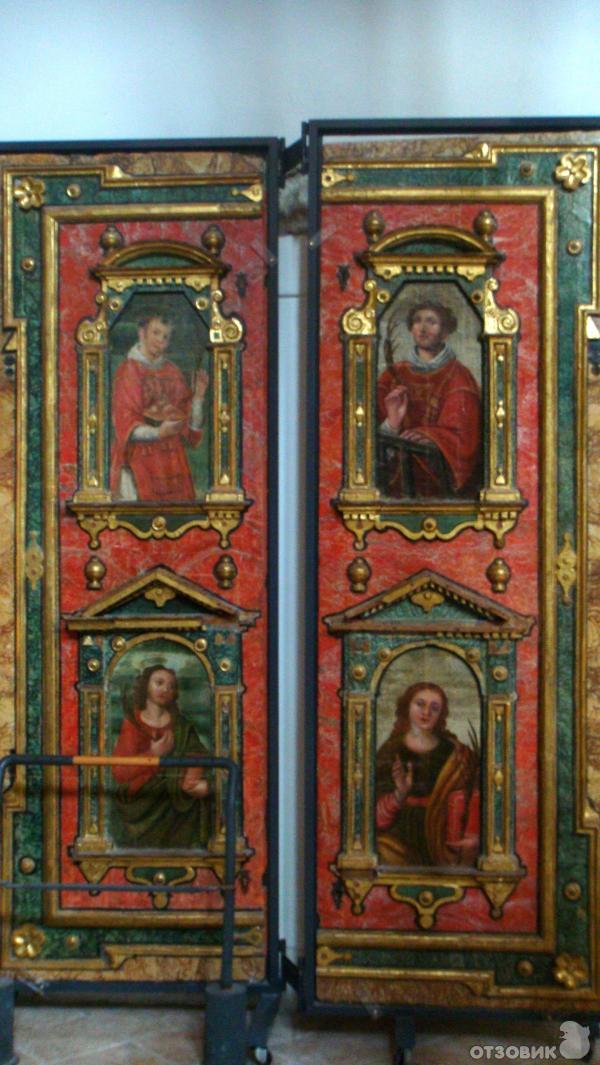 Many of the frescoes have been lost, but some have survived since the 14th century (!) 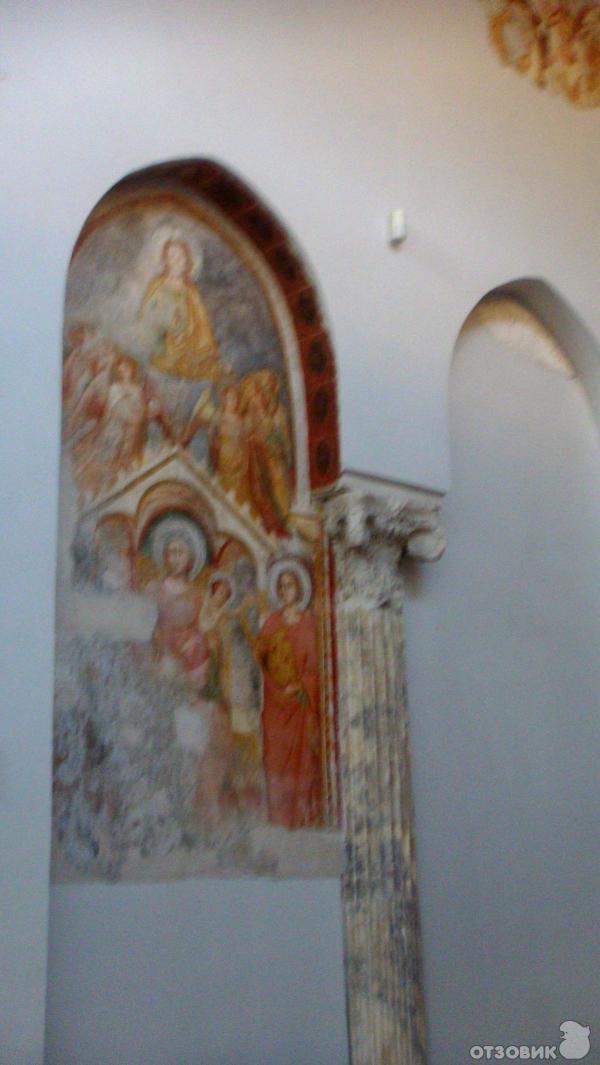 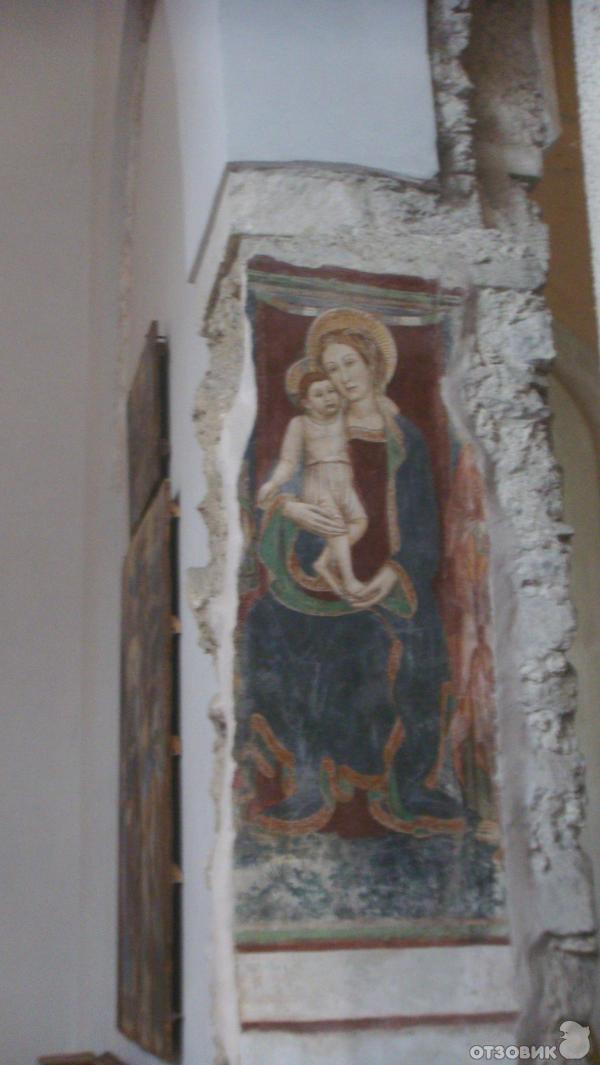 As I wrote above, the Amalfi Cathedral is a complex of buildings that also includes a monastery courtyard, called the “courtyard of paradise”. 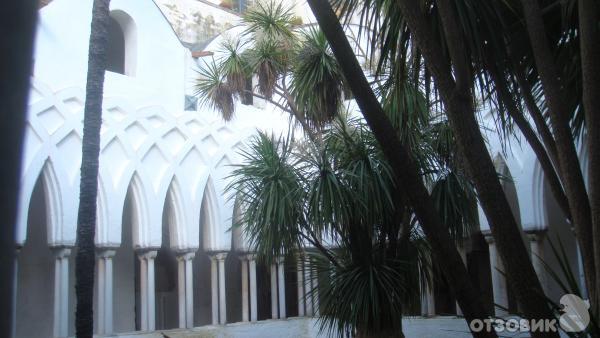 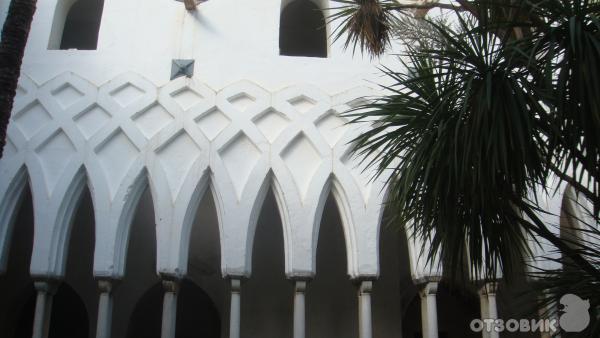 For several centuries this courtyard was nothing more than a cemetery where noble citizens were buried (until 1600). It was only in 1908 that this “patio of paradise” was restored and today we see 120 columns in the Moorish style. This place immediately reminded me of the Villa Rufolo in Ravello, where the Moorish style of architecture was also applied.

READ
The most romantic places in Bologna, Italy

But let’s go on, to the crypt, which dates back to the 13th century. This is probably the most beautiful and interesting part of the Amalfi Cathedral of St. Andrew. The crypt was slightly remodeled in the 17th century, with frescoes and stucco added. 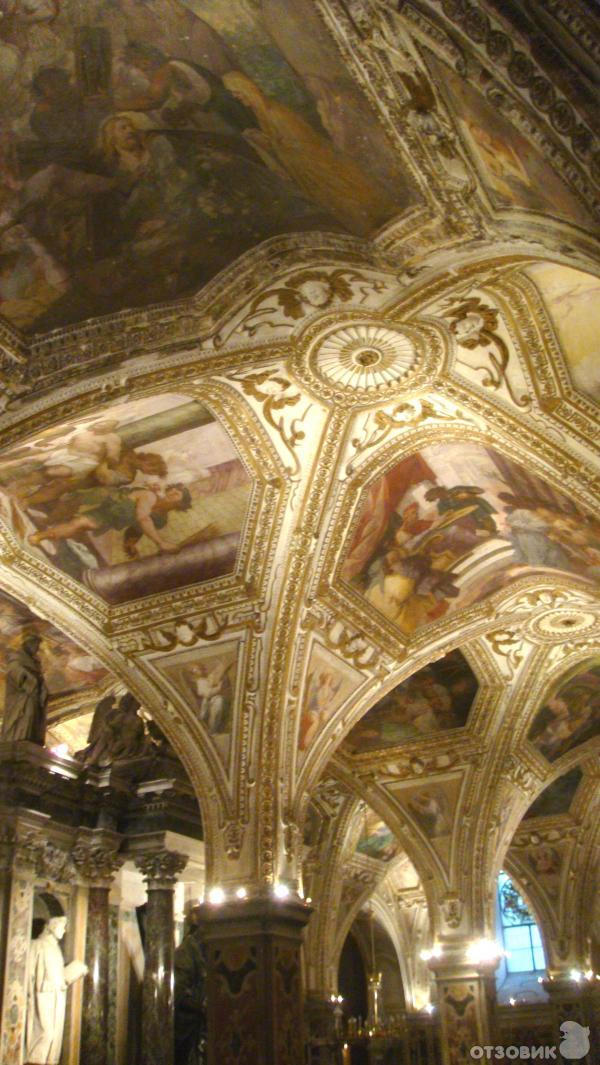 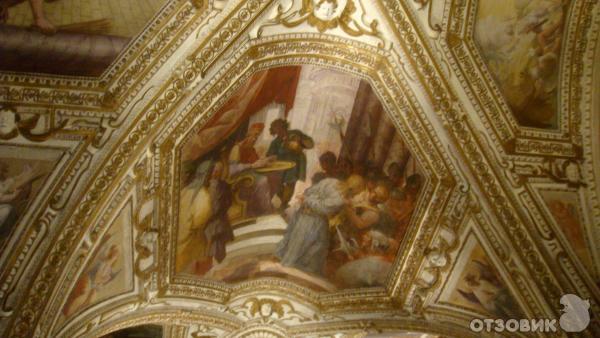 All frescoes are combined into one cycle, The Passion of the Christ. The main attraction, or rather, the relic of the crypt are the relics of St. Andrew.

Here is also a bronze sculpture of St. Andrew, more than two meters in height, and on the sides of the marble sculptures of the son of the famous Lorenzo Bernini – Pietro. 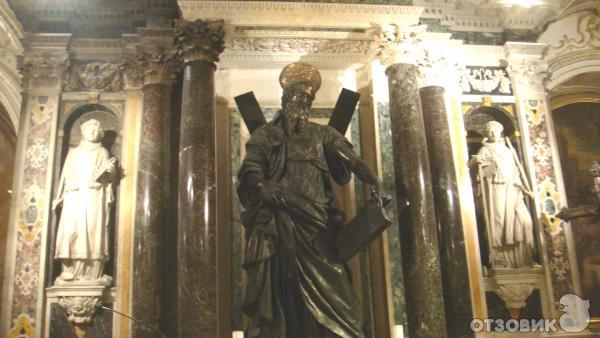 That’s my story of this famous, majestic and beautiful cathedral. A cathedral grandiose and refined.

I will say that the grandeur, uniqueness and beauty of the cathedral amazed me. And Amalfi itself, however, as well as all the Amalfi coast for a long time remembered for its romance, charm and uniqueness.

The crypt with the relics of St. Andrew in the Cathedral of Amalfi

The dominant feature of the ancient city of Amalfi (founded by the ancient Romans), a UNESCO World Heritage Site, is its magnificent medieval cathedral from the 12th century dedicated to the Apostle and St. Andrew – pictured

In front of the cathedral stands a sculpture of the Apostle Andrew, as he is also the patron saint of the city.

Gothic portal of the cathedral has a grand medieval staircase.

The main entrance and the bronze doors were taken out of Constantinople by crusaders in the 13th century.

Nowadays the interior of the cathedral itself is in baroque style, since it has been repeatedly rebuilt in the 16th and 18th centuries.

The main attraction of the Cathedral of Amalfi – are the relics of St. Andrew, also taken out of Constantinople – in 1206, after the capture and looting of the capital of Byzantium.

The crypt has also been redecorated more than once since the 13th century, and what we see now was done in the 17th century in the Baroque style.

The main altar of the crypt was made by the famous master Domenico Fontana in the 16th century. He also made and silver cancer, which is located and the relics of the Apostle.

On the monumental tomb the Apostle is depicted with a large cross, since it is known that St. Andrew was in the habit of putting crosses everywhere – wherever he was.

The cross on which St. Andrew was crucified in the 1st century had the form of the letter X and was called St. Andrew’s Cross.

The bronze statue of St. Andrew is the work of Michelangelo Nacheroni; on either side of the Apostle are the first deacons of the Western and Eastern Churches – St. Stephen and St. Lawrence, works of the famous 17th century master Bernini.

The cathedral and its crypt are a must-see if you find yourself in Amalfi.

✔️ Cashback of 2% when booking Rail Tickets on Yandex.Travel.