Watching the northern lights is a magical experience and a vivid sense of indescribable excitement. Norway is the perfect place for those who want to see the Earth’s magnetic field.

Read in our article about the best places to watch this spectacular phenomenon, as well as some tips for planning such an adventure.

From school astronomy course we all remember what the northern lights are. How it is formed and why. For those who don’t remember it, you can read about it. Here are a few facts about that remarkable phenomenon:

Northern Lights can be seen from space

Other planets also have aurora borealis

Jupiter and Saturn, Uranus and Neptune. Auroras on Jupiter and Saturn are larger and more powerful than on Earth because the magnetic fields of these planets are more intense. On Uranus, the auroras look very strange because the planet’s magnetic field is oriented approximately on a vertical axis, but the planet itself rotates on its side. This means that instead of bright rings, Uranus’ auroras look more like single bright spots.

The glow can be applauded.

In addition to the magical visual show, the glow also creates a strange sound that has been described as similar to the sound of applause (crackling, faint hissing) – and why not? Nevertheless, the sound coming from the northern lights is extremely rare.

Most often the northern lights are green

Green is the most common color for any polar lights. Then comes pink, a mixture of green and red, red, yellow and finally blue.

Where to see the aurora borealis in Norway

In northern Norway, here are some places: 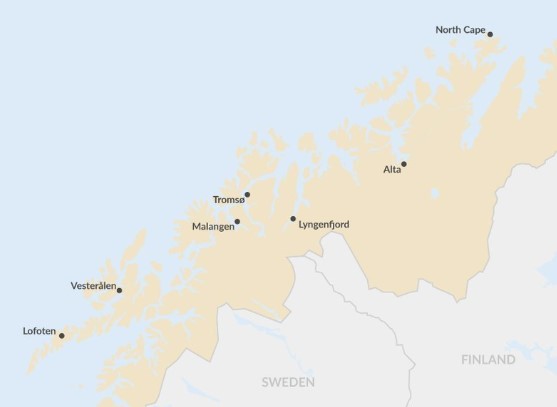 The lights are always on, but because of sunshine people can’t see them all the time. That’s why polar nights come in handy, because they allow you to watch the magic. It is better to choose a dark, cloudless night, then the aurora borealis will definitely be visible.

Experience shows that the aurora most often brightens a few hours before and after midnight. The northern lights are affected by solar activity, as strong solar winds intensify the glow. The glow is strongest when the active surface area of the Sun faces the Earth. Thus, spectacular displays of northern lights occur at about 27-day intervals, just the time it takes for the sun to wrap around its axis.

October, February, and March are the best months to observe the aurora. The glow can be seen from late September to mid-April, but the brightest phenomena can be seen in late September-October and March. In addition, during these months the nights are not yet the coldest in Norway, which allows you to admire the aurora from the comfort of your own home.

Watching the glow will require patience. After all, the spectacle can begin at any moment. Many people find that cold, dry weather creates the clearest aurora, and strong winds can help clear the sky of clouds in coastal areas. Try to avoid a full moon, as its bright light can make the luminosity less intense. 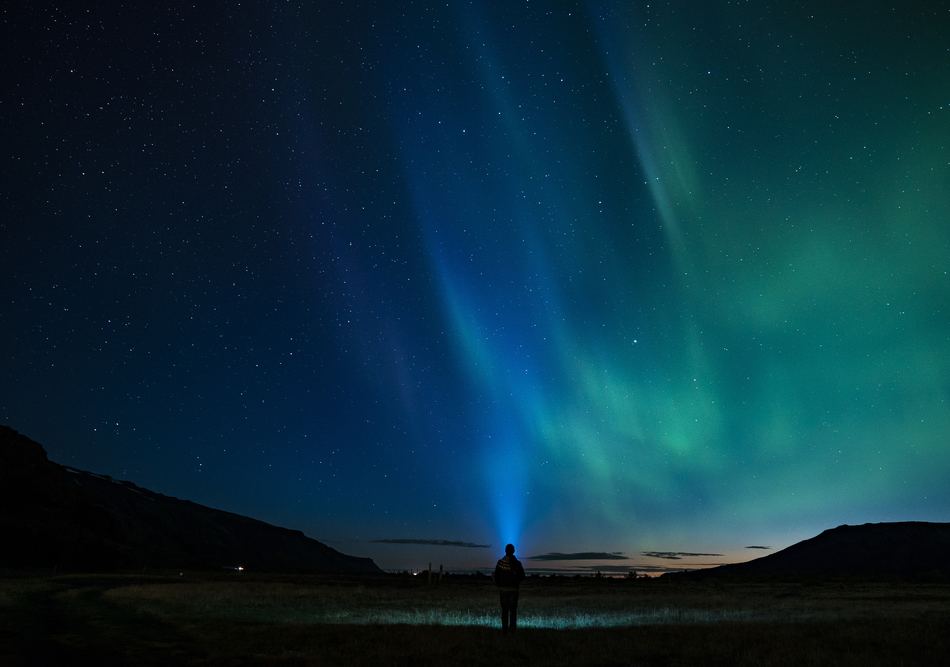 1. Keep an eye on cloud cover and the weather forecast. Weather is the most significant obstacle to observing the northern lights. You can follow the weather from here. A reliable geomagnetic disturbance forecast can be found here.

2. Try to find places to observe away from light sources, as the brightness of the aurora borealis may be slightly distorted by light from buildings and fumes from roads.

READ
Medieval Spello - history and art in the heart of Umbria

3. The full moon can give the same effect and can really help you, especially if you plan to take pictures, with its light it can illuminate the foreground and surroundings, thereby making it easier to focus and you get a clear image.

4. Stock up on warm clothing. Patience will be required, you may have to wait in the cold for more than an hour until the magical nature show begins. So take care of the availability of warm clothing such as mittens, fleece, scarf, wool sweater, thermal underwear, down jacket and warm shoes are not even a question. Warmers would be nice too.

5. Prepare snacks. A thermos tea/coffee and a couple of sandwiches will brighten up any wait.

6. Download an app that helps you keep track of the possibility of northern lights in a particular location. Very handy if you don’t have time to track solar activity, moon phases and cloud cover on your own. Such apps exist for both Android and iOS smartphones.

7. There are ready-made northern lights observation tours, with a guide, lodging, and various packages of your choice.

For those who love taking pictures:

1. use an amateur or, better yet, a professional camera.

2. take interchangeable lenses, who knows where, what size and intensity the glow will be.

3. better if you have a remote control, it’s convenient to control and take pictures without touching the camera.

4. A tripod is a must, so your photos come out sharp.

5. 5. fully charge the battery on your device, it gets dead quicker in the cold. You may need to get an extra battery or a portable battery. Keep all chargers warm (in your pocket, or under your jacket).

6. Deactivate the flash and forget the automatic settings.

8. The lens should be in manual focus mode.

The best places to see the Northern Lights in Norway

The Northern Lights are shrouded in legend: the Vikings believed it was the glow of the swords of Valhalla, and the Icelanders believed that elves danced that way. Even today this beautiful phenomenon is unpredictable and depends on many conditions. We will tell you about the countries and places where you can see it. 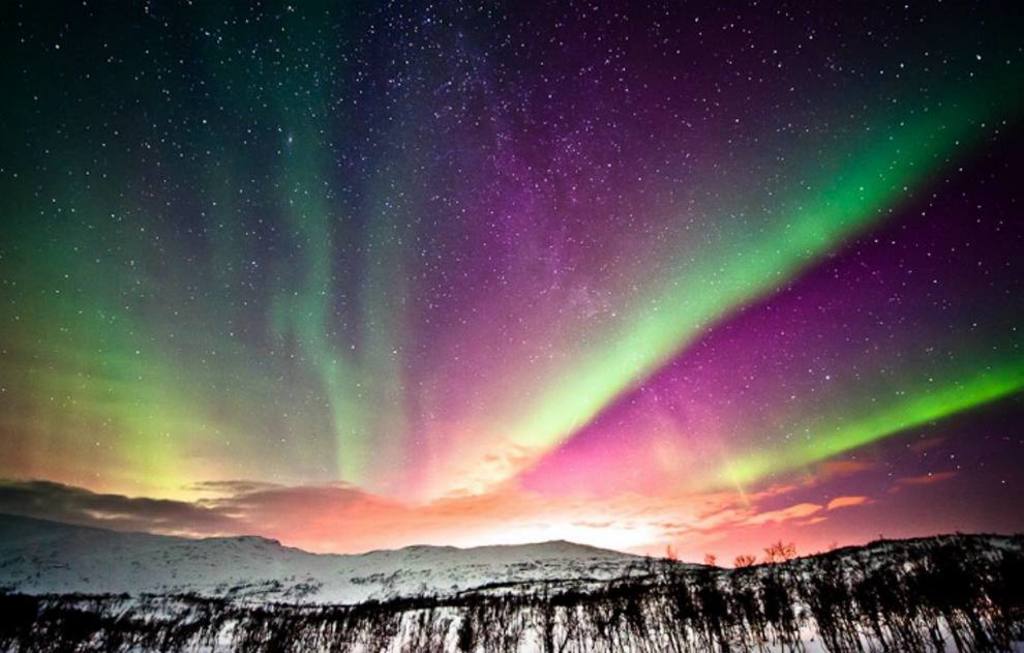 Norway is one of the best places on earth to see the northern lights. The so-called “Aurora Belt” runs from the Lofoten Islands to Cape Nordkapp, with the largest towns in the area being Tromsø and Alta. The most comfortable way to admire the light is in Longyear, a settlement on the Svalbard archipelago, where you can rent rooms with a glass roof (you can book a room here). The most extreme way is to go to the Norwegian part of Lapland and stay in an igloo hotel, and watch a dog-sled race at the same time.

When to go: late September to March 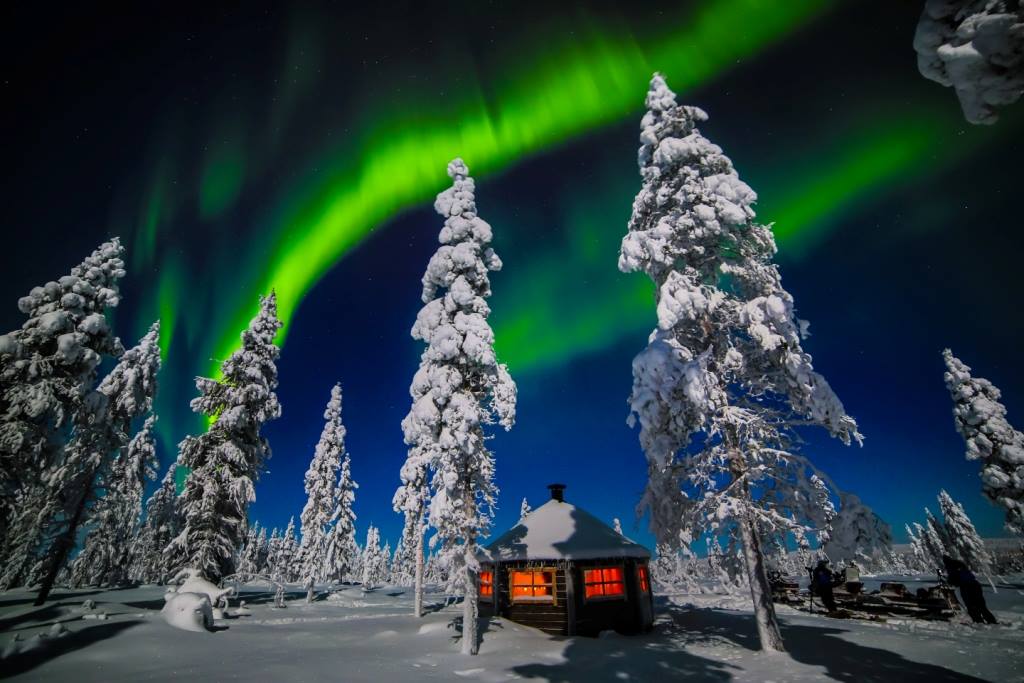 The areas of the villages of Sodankylä, Ivalo and the city of Rovaniemi boast that they see the northern lights every other night. In Rovaniemi the brightest glow is in February, on this occasion the city holds a festival of northern lights (Revontuli Festivaali). And in the vicinity of the village of Kilpisjärvi lights appear every three nights out of four and are reflected in a frozen lake.

40 kilometers from the village of Ivalo, which consists of hundreds of igloos with transparent ceilings (you can book here).

READ
Sunbathing in the Bahamas: popular islands for vacations

When to go: from October to March 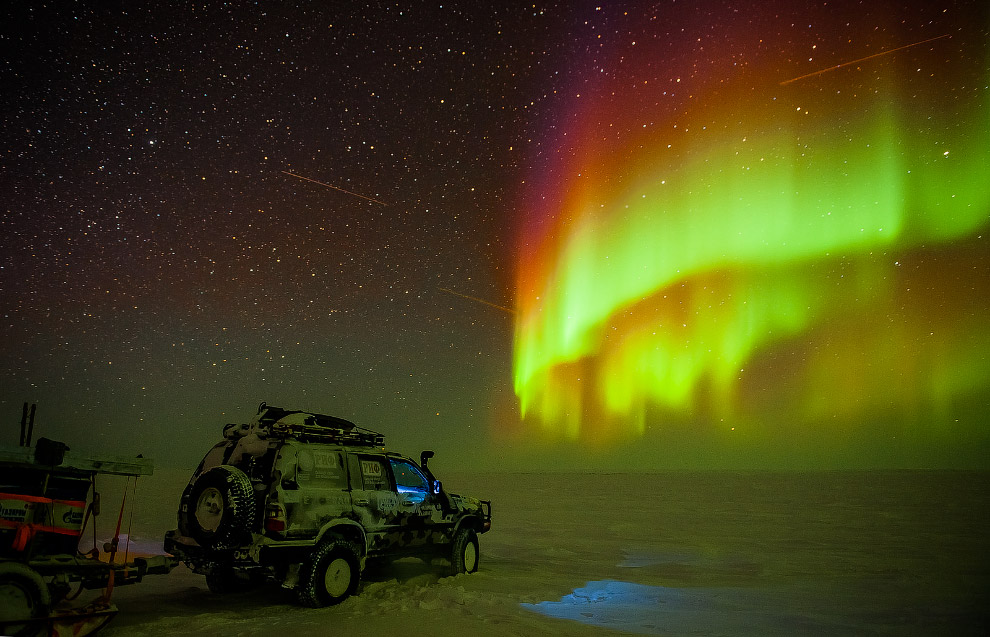 In Russia, the Arctic Circle runs along the entire country and the northern lights can be seen in winter in many northern regions. From Moscow and St. Petersburg it is most convenient to go for northern lights to Murmansk and Arkhangelsk regions.

In Murmansk region northern lights are best seen in Vidyaevo, Teriberka, Polar and Pechenga settlements. Also pay attention to the Khibiny Mountains in Kirov region, where the northern lights are seen at the recreation center “Kuelporr”, where there is a transfer by snowmobile with sledges from Kirovsk, as well as in the urban settlement of Kukisvumchorr.

From time to time northern lights can also be seen in Arkhangelsk, but it is better to go to the north of the region, where there is less light pollution. 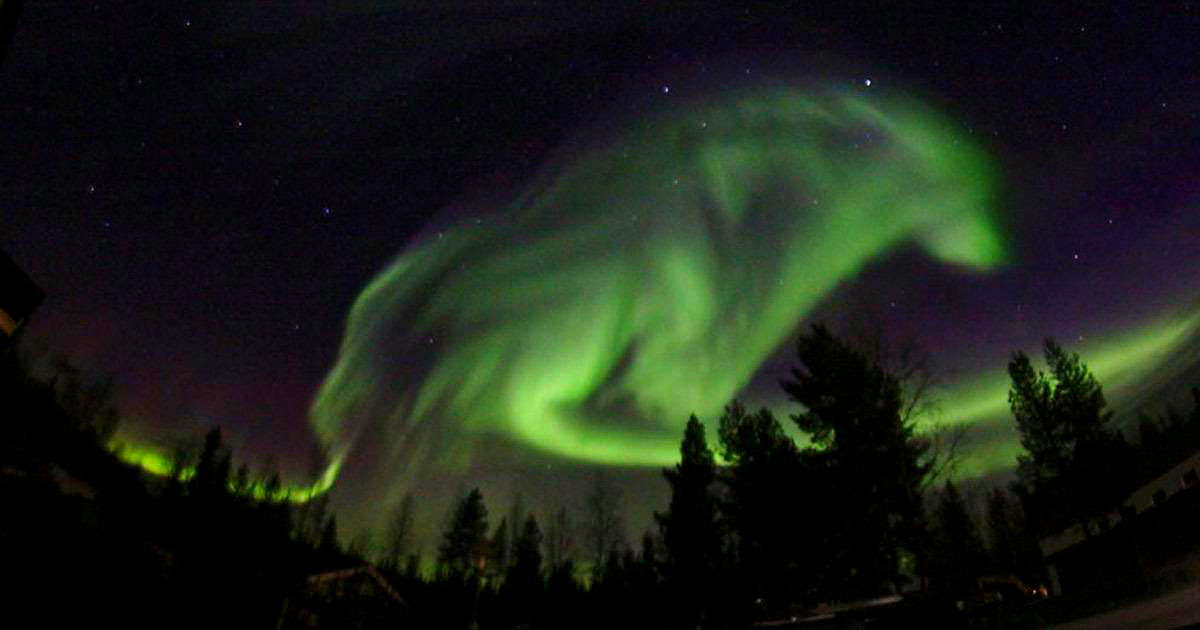 The Arctic region of Sweden, which covers the entire northwest of the country, is famous for its magnificent northern lights. The Aurora Sky Station in Abisku National Park, at 900 meters above sea level, is considered to be the best viewing platform, where up to 200 northern lights occur per year.

When to go: early September to late March 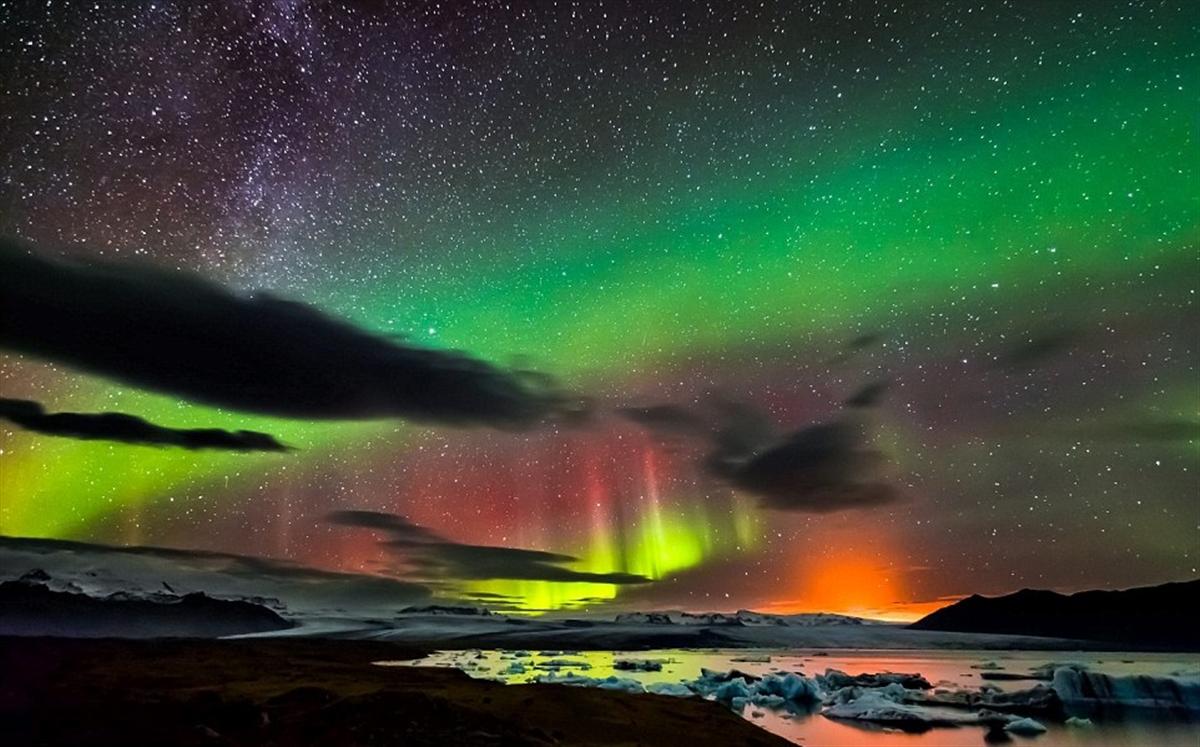 Iceland is a great destination for those who want to admire the light without feeling uncomfortable because thanks to the warm current of the Gulf Stream temperatures on the island rarely drop below zero. 60 kilometers from Reykjavik, in the town of Stokxeiri there is a Center of Icelandic Wonders, dedicated to trolls, elves and northern lights. More chances to see the aurora are in the town of Akureyri, in the north, where the weather is driest on the island, or in the glacial lagoon of Jökülsaurloun in the southeast.

READ
The History of a Fortress. Palanok Castle.

When to go: from October to March 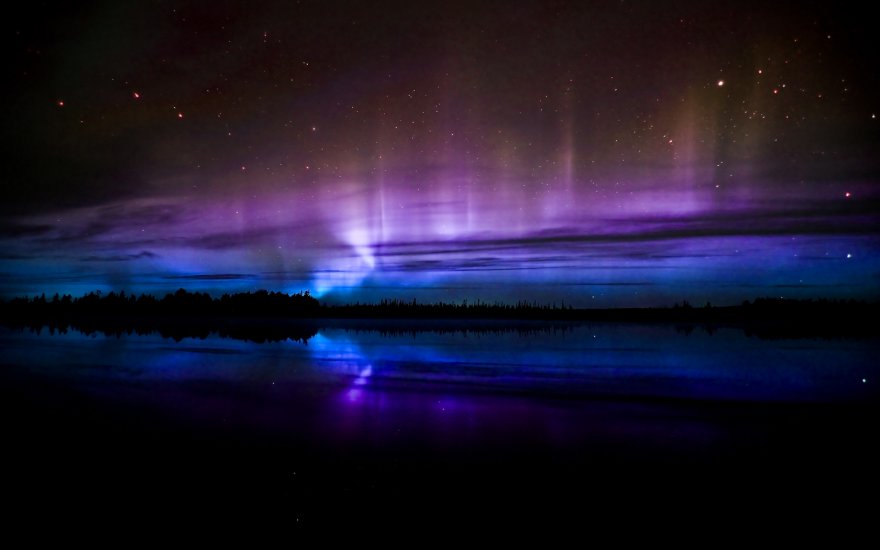 The best chance of seeing the aurora is when the weather is dry, cold and clear, away from the city, between 9 p.m. and 1 a.m. It also depends on solar activity (the higher the activity, the brighter the aurora borealis). See the northern lights probability forecast at this site.