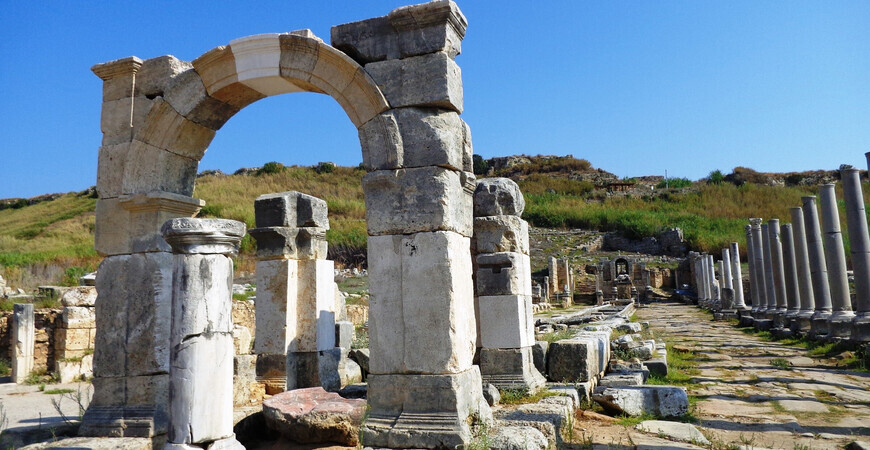 The ancient city of Perge is one of the archaeological sites of Turkey. Since 2009 is included in the list of UNESCO sites.

Located this historic place 18 kilometers east of the resort town of Antalya. Perge (less frequently referred to as Perga) was once the most important city of ancient Pamphylia. The settlement gave the world the famous mathematician and astronomer Apollonius. Perhaps the name of the great native is not familiar to everyone, but everyone has encountered the results of his work in math classes. We are talking about the hyperbola and the parabola.

In ancient times, Perge was known as a sanctuary dedicated to the goddess Artemis. The temple to the patroness of all living things stood on a hill outside the city. Unfortunately, intensive excavations were unsuccessful – archeologists found no traces of the majestic construction. Only coins with the image of the goddess and the temple, minted in the city.

Ruins and sights of Perge in Turkey

Lovers of antiquity will not be disappointed, because on the territory of the ancient town there is something to look at and without the temple of Artemis. Moreover, Perge – is the real open-air museum.

Excavations have been conducted here since 1946. Among the latest finds are well-preserved Greek mosaics depicting the ocean and jellyfish. In 2017, a mosaic depicting the sacrifice of Iphigenia (an epithet of Artemis) was added to the collection. Because of the attractive appearance of these and other mosaics, the township has been dubbed Turkey’s second Zeugma.

The first landmark that comes across the way of tourists is the amphitheater. It dates back to the II century and combines Roman and Greek architectural features. In the Roman style there is a semi-circular aisle between the rows and a 25-meter stage, standing on a high podium. Once it was decorated with reliefs dedicated to mythological plots and episodes from the life of Dionysus. Nowadays almost all the sculptures and reliefs are stored in Antalya Archaeological Museum. There were about 15.000 people in the amphitheater at one time.

READ
Kenya is the most developed country in equatorial Africa

The stadium was characterized by a slightly smaller capacity of 12,000 spectators. The ruins are located directly opposite the amphitheater. The construction is 234 meters long and 34 meters wide. Such parameters make the stadium one of the largest of its kind. Of all ancient stadiums only Afrodisias is considered more complete.

The stadium consisted of 12 rows of seats resting on the barrel-vaulted structure. There were about 39 vaults in all. It is noteworthy that some of the arches served as an entrance, while the other served as a place for trading rows. If you look closely, you can find inscriptions left by shop owners. These give information about the traders and the merchandise sold there. The arena for gladiatorial fights is adjacent to the stadium to the north.

This is the name of the southern gate through which travelers enter the ancient city of Perge. Built in the IV century during the reign of Emperor Septimius Severus. The gate was fortified with high towers.

The Hellenistic Gate is the most iconic symbol of the city of Perge. The Hellenistic gate is the most emblematic symbol of the city of Perge. Behind the gate there is an inner courtyard with two-storey colonnade. The upper level was occupied by the statues of the founders of the ancient city, the lower level by statues of Greek gods. Sculptural images of Roman emperors were located in the northern part of the courtyard. Now all the artifacts adorn the Archaeological Museum of Antalya.

Note the remains of the fountain complex, which consisted of a pond and a decorative facade, to the south of the gate.

The city boasted several bath complexes. The Thermae, on the north side of the settlement, had a typical Roman layout with five rooms. The walls lined with travertine are still visible today. The building is considered one of the best examples of monumental baths in the Pamphylia region.

On the west side of the Hellenistic gate are the ruins of another bath. The building consisted of south-facing windows. Here one can see the thin marble slabs. A few rooms show an open heating system.

In the open-air museum you will find a number of ruined churches. Look for traces of Christian shrines in the southern part of the city. The remains of this temple with its apse date back to the 6th century A.D. The three-nave basilica, or what is left of it, is in the central part of Perge.

This is a square with the size 65 by 65 meters. It was built in the IV century A.D. It was once surrounded by a colonnade. Under the horizontal ceiling of the arches there were stores.

The Acropolis and the Necropolis

The inconspicuous building on top is the acropolis. If you’re not too lazy to go inside, you’ll see the ruins of the marble columns and vaulted ceilings.

The main necropolis of Perge was outside the city, on the west side. A smaller cemetery was set up on the east side. Many tombs and sarcophagi were discovered during excavations of the necropolises. The best samples went to the same archaeological museum.

Excursions to the ancient city of Perge

The place is popular with fans of organized tours. In addition to a visit to Perge, the program usually includes viewing the historical sites of Aspendos, the amphitheater of Side, the waterfall Kursunlu. The tour is held in one day. The starting point is Antalya, but there are also exceptions. Tours are purchased from local operators. Guide services are usually included.

The exact date of the foundation of the settlement is unknown. Some archeologists believe that the history of the city began after the Trojan War in XIII century B.C. Allegedly, Greek emigrants, headed by the famous visionaries Calchas, Amphilochus and Mops, arrived here. The first inhabitants settled in the area of the acropolis. It was a somewhat strange choice at the time – coastal territories were usually settled. Perge was separated from the sea by a distance of 20 km.

READ
Things to see in Jerusalem: Dome of the Rock Mosque

According to the second version, the city existed in 1000 BC. Such conclusions were made by scientists on the basis of the discovered Hittite plate. Adherents of this opinion identify the city with the name Parkha.

Until 334 BC the ancient city was in the zone of Persian influence. In 333 BC Alexander of Macedon conquered the settlement. The inhabitants did not resist the seizure, on the contrary, they themselves opened the gates to the Macedonians.

In 188 B.C. the city was ruled by the Romans. The first century A.D. is considered the earliest time when Christianity began and is attributed to the Apostle Paul. The preacher visited the city on many occasions. After the second visit the first church was founded in Perga.

The last period of prosperity fell on the V-VI centuries AD. In the VIII century, Perge was no more – the city was destroyed during the Arab invasions and was never rebuilt.

Tips for visitors to the ancient city of Perge

The most convenient way is to go from Antalya. You can get not only as part of a tour, but also on their own.

On the high-speed streetcar: In Antalya they are called AntRay. Transport connects the center of the resort with the outlying areas. It goes in the direction of the EXPO. Be careful: the traffic is forked. This means that part of the trains takes passengers to, the airport, part – to EXPO. Get off at Aksu station. Travel time (from the city center) will be half an hour. From the bus stop, it will take about 15 minutes to get to the landmark: go straight down Perge Street.

READ
Top four places to go in Germany in summer

By bus: Regular buses go to Aksu from the Ilceler Terminali of the local bus station. Tickets can be bought from the driver. It is possible to take transport number AC05. Ask to stop at “Perge Yolu” and then follow the signs.

By Car : The destination is near the D400 highway that connects Antalya to Side and Alanya. After you have left Aksu behind you, take the İsmaıl Ogan Cd and after 180 meters turn right onto Perge Yolu and then left onto Atatürk Cd. Drive straight on until you see the ruins. The total journey will not take more than half an hour.

By cab: the car can be called by using special buttons on the poles, stops and trees. Transport arrives within 5 minutes. There are many cars waiting for your clients at the stands of Mmerkez Taksi, Ozgur Taxi, and Kaleici Taxi.