The three churches, the 3 main landmarks of Bordeaux: Saint-André Cathedral, Saint-Michel Basilica and Saint-Seurin Basilica are part of the UNESCO World Heritage List as part of the pilgrimage route to the Spanish city of Santiago de Compostela.

The sights of Bordeaux in the historic center can be seen during the city’s tourist itineraries: What to see in Bordeaux

The capital of the New Aquitaine region, known worldwide for its famous vineyards, also has a prestigious architectural heritage. A jewel of the 18th century, Bordeaux’s City of Art and History, a UNESCO World Heritage Site since 2007, takes visitors back to the Age of Enlightenment. A remarkable urban and architectural ensemble which can be enjoyed on a scenic walk along the banks of the Garonne, its elegant streets and the city’s imposing squares. Landmarks inherited from this period include the lively Place de la Comédie, with its neoclassical Grand Theatre decorated with imposing Corinthian columns, the Place de la Bourse with its fountain of the Three Graces and the Allées de Tourny. A walk through the historic center is a wonderful way to discover medieval Bordeaux: the Saint-André Cathedral with its carved portals, the Gothic choir and the Renaissance organ loft, the imposing Caillaux Gate dedicated to Charles VIII, the Sainte-Croix church with its Romanesque Saintonge facade and the Great Bell Tower (Grosse Cloche), the bell tower of the old town hall, are all reminders of that era. Separated from Saint-André Cathedral, the 15th century Pey Berland tower offers a spectacular view of the city’s rooftops and spires. Such a view, though, must be earned by climbing the 231 steps of the narrow spiral staircase! Not far from this Gothic jewel is the famous Rue Sainte-Catherine, a long pedestrian shopping street popular with shoppers, which connects Place Victoire to Place de la Comédie.

READ
The 24 best sights in Mordovia - descriptions and photos 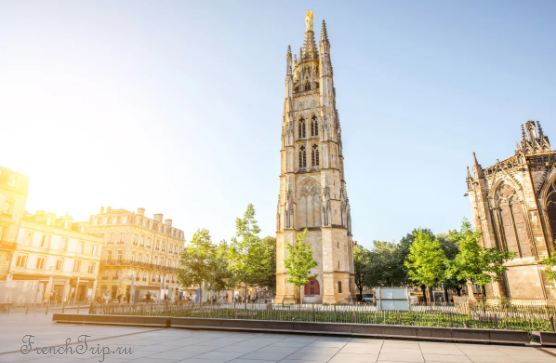 The banks of the Garonne

Garden lovers will prefer the banks of the Garonne, where the beautiful Jardin des Lumières (Garden of Enlightenment) stretches on either side of a beautiful water mirror. This vast space with walkways and flowerbeds, with a beautiful view of the river and the Bastide district, located on the right bank, is dotted with street lamps that magically illuminate it at dusk.

Then you can continue your walk to the huge Esplanade des Quinconces . On one side of it rise two rostral columns and on the other is the famous monument to the Girondins, built at the end of the 19th century to commemorate the Girondist Members of Parliament who fell victims to terror. The latter, listed as a historic monument, consists of two pools decorated with bronze water horses and a column 43 meters high, on top of which stands the Statue of Liberty, breaking the chains. A few blocks away is the public park, a 10-hectare English garden popular with joggers and for walking, including a botanical garden, library and natural history museum.

Bordeaux (France) – the most detailed information about the city with photos. The main sights of Bordeaux with descriptions, guides and maps.

Bordeaux is a city in southwestern France, the capital of the historical region of Aquitaine and the Gironde department. It is famous for its wines, which are considered some of the best in the world, as well as the largest student population in the country. Bordeaux is an elegant southern French city with a charming provincial charm. It is known for its rich cultural and historical heritage, thanks to which it is included in the list of UNESCO sites. This old market town is called the “port of the moon” because of its location on the curved, crescent-shaped Garonne River.

Things to do (Bordeaux): 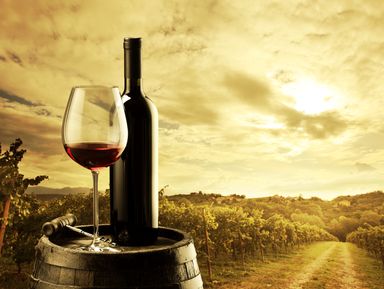 Wine tour of the Medoc.

Explore the wine region and savour some wonderful Medoc wines 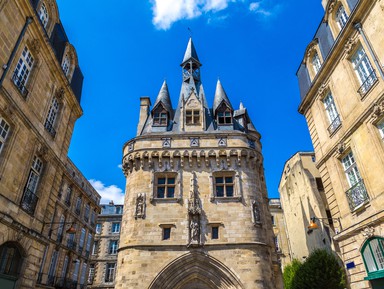 Charm and taste of Bordeaux

Bordeaux is located in the north of Aquitaine, 500 km southwest of Paris, in the Garrona bend. The river divides the city in two parts: the historical center and port on the left bank and modern districts on the right. The climate of Bordeaux is transitional from temperate maritime to Mediterranean subtropical. Summers are comparatively hot and sunny, and winters are mild, although cool because of the prevailing westerly winds. 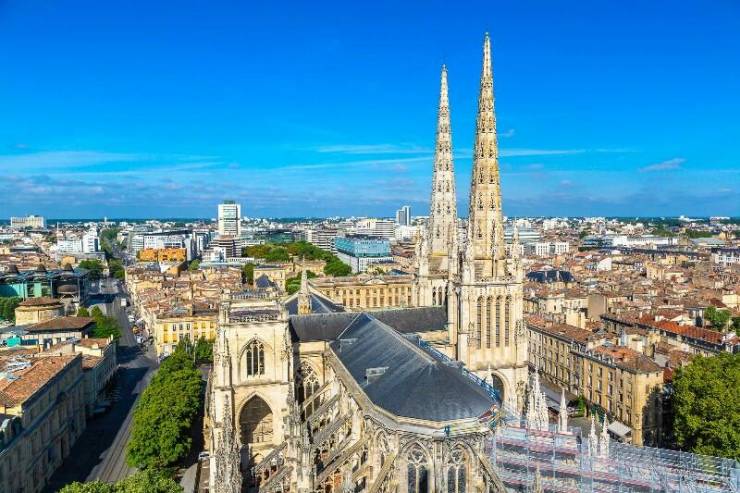 Bordeaux was founded more than two thousand years ago. The origins of the city go back to the Celtic settlement of Bourdigalle. In the 1st century BC it was conquered by the Romans, led by Julius Caesar, and became the center of Aquitaine Gaul. 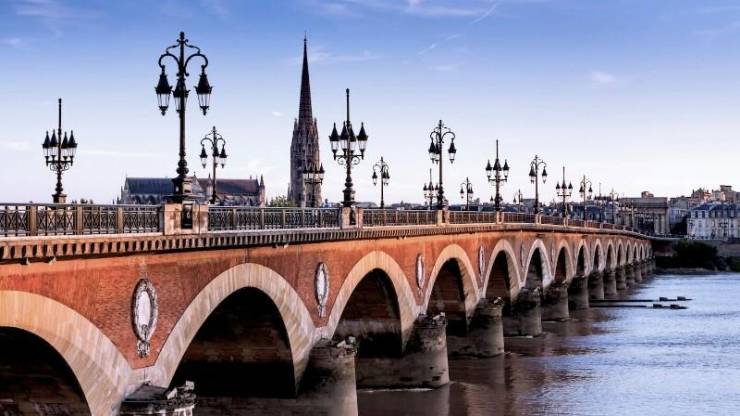 In the Middle Ages Bordeaux was quite a prosperous city. After the English kings of the Anjou dynasty became dukes of the region, beautiful new buildings were built, the cathedral was expanded, and wine production developed. The city also had considerable liberties, which were terminated after the end of the Hundred Years’ War, when Bordeaux became part of the Kingdom of France. 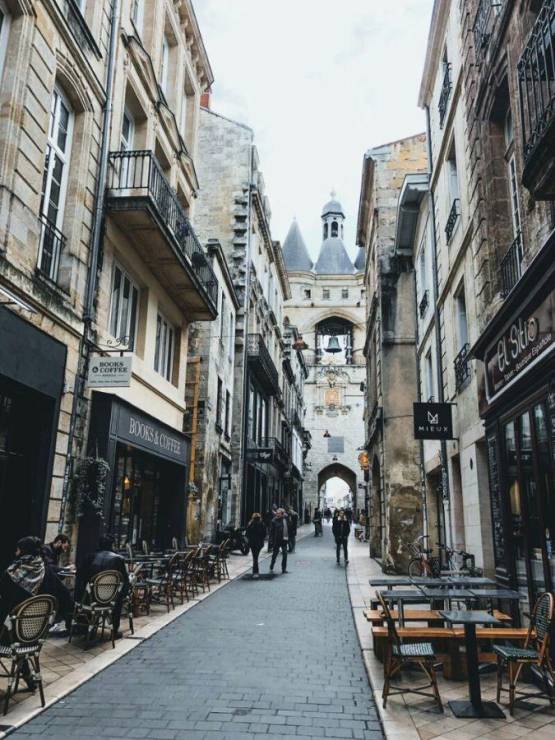 The streets of Bordeaux

After a period of decline, Bordeaux began to grow rich on trade with the Americas. In 1746, the Marquis de Tourny wanted to make the city one of the most beautiful in France. After that, the center of Bordeaux was greatly rebuilt in the Classical style. In the new time, the city continued to grow rich on trade. Trade flowed through Bordeaux from the French metropolises. During World War II, the city was bombed several times. 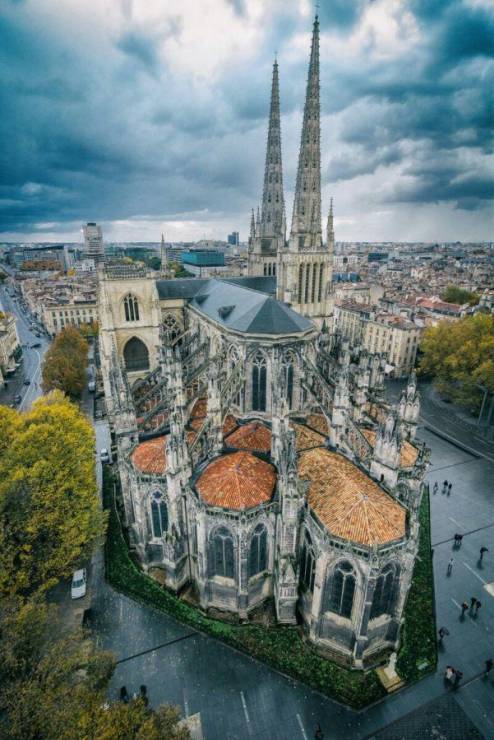 St. Andrew’s Cathedral is the most beautiful religious monument in Bordeaux, located in the heart of the city. The building was built by the local archbishops between the 12th and 14th centuries mainly in Gothic style. In 1789, during the French Revolution, the cathedral lost almost all of its decorations and religious treasures, and the building itself was used to store fodder. In the 19th century, the church was significantly damaged by fire. The building was subsequently carefully restored, although it lost its antique furniture. 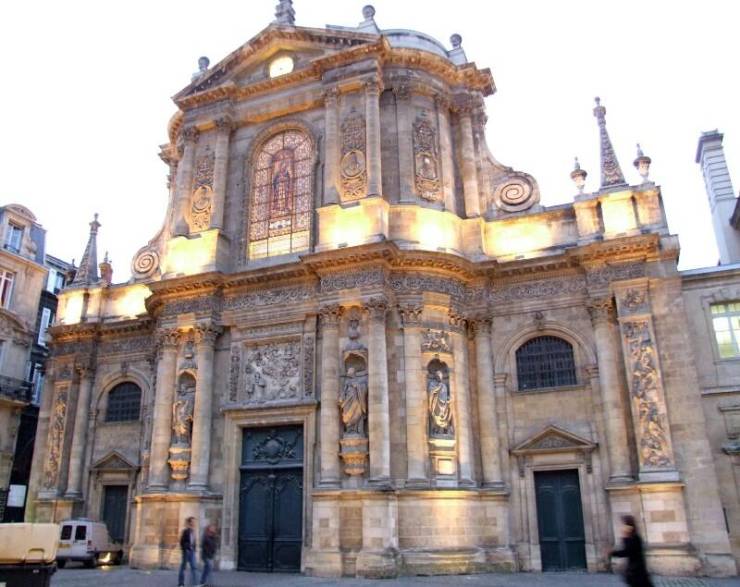 Notre Dame is a Baroque-style Catholic church completed in 1707. 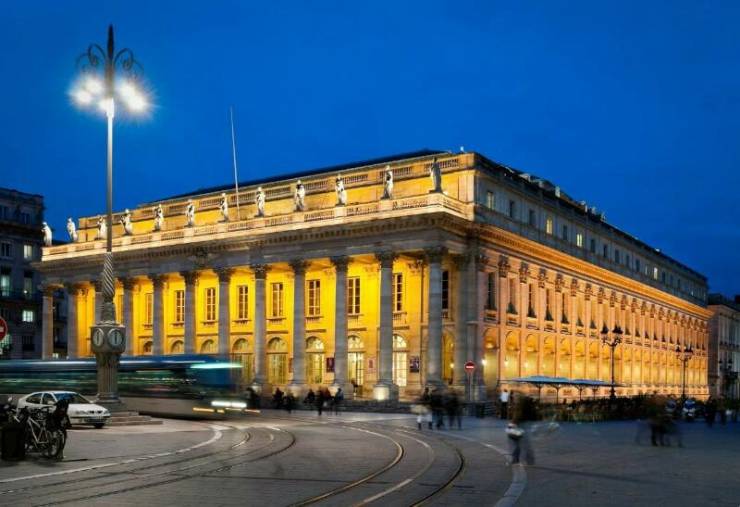 Le Grand (grand) theater is a masterpiece of classicism, completed in 1780. The theater building is one of the most symbolic in Bordeaux and was built on the site of an ancient Roman forum. The architect is Victor Louis, who also designed the Palais Royal and Théâtre Français in Paris. One of the interesting features of Le Grand Theatre are the 12 colossal Corinthian columns and statues of the nine Muses and Goddesses. 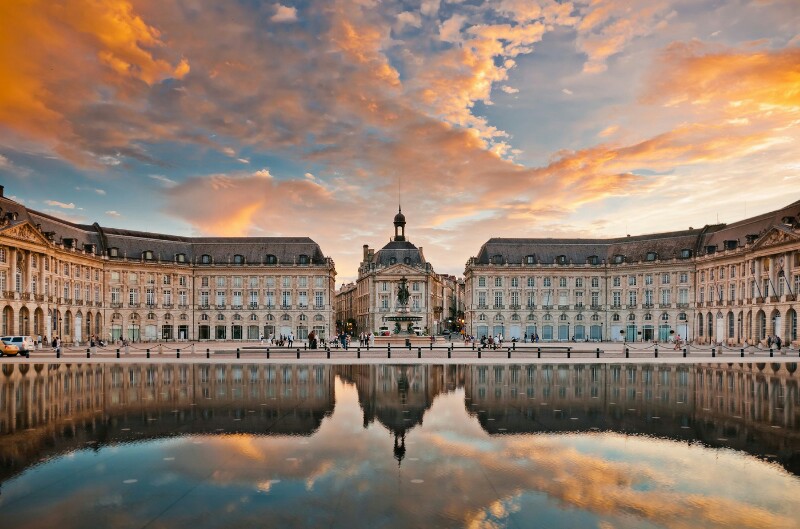 The Place de la Bourse is one of the symbols of Bordeaux. This place played an important role in the development of the city and trade. The square has a beautiful classic 18th century architecture. In the center is the fountain of the Three Graces, which is surrounded by the old stock exchange and the customs museum. 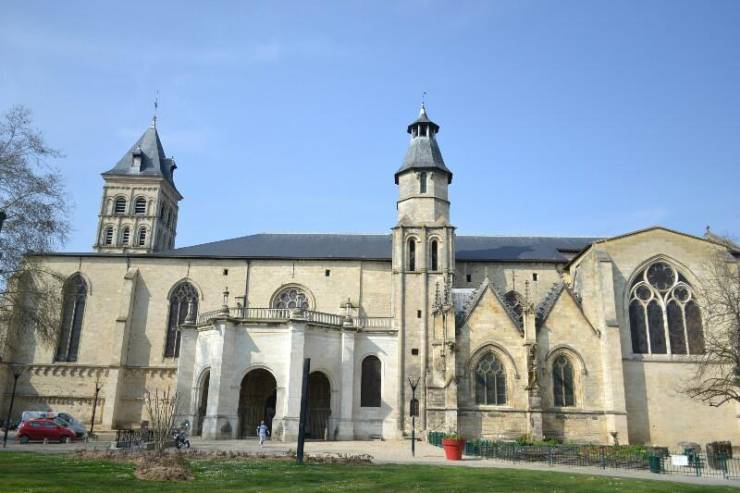 St. Serin is an exquisite Romanesque basilica that is a stop on the medieval religious route of St. James in Santiago de Compostela and is listed as a UNESCO World Heritage Site. The origins of the church go back to the 11th century. It has a beautiful choir and ornate chapels. The oldest part of the basilica is the 11th century crypt, which contains ancient relics and sarcophagi from the 6th and 7th centuries. 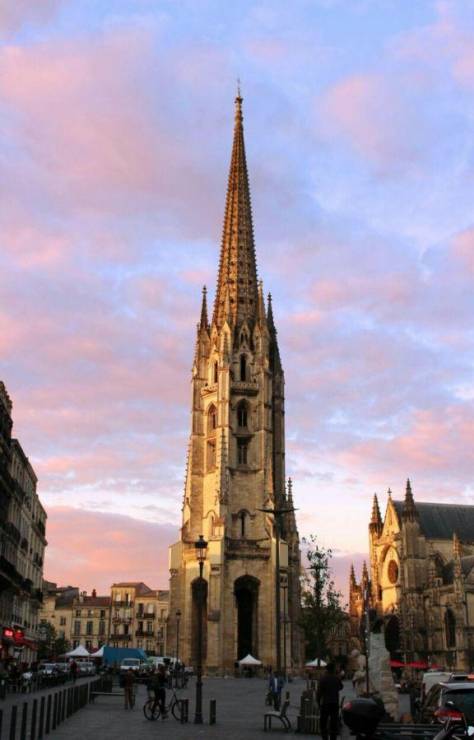 Saint-Michel is a grandiose early Gothic basilica dedicated to the Archangel Michael. It took 200 years to build, starting in the 14th century. Saint-Michel Basilica is also a stop on the road of Saint James and a UNESCO World Heritage Site. The church has rich Gothic decorations and a freestanding bell tower, which offers a beautiful view of Bordeaux. A weekly farmer’s market and flea market are held on the square in front of the basilica, and the neighborhoods around it are the most colorful and atmospheric in the entire city. 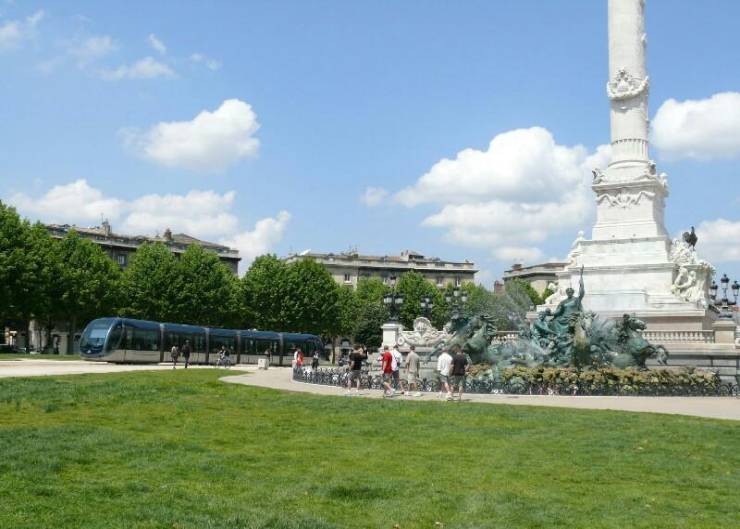 Esplanade des Quinconces is one of the largest squares in Europe. It is located in the heart of Bordeaux near Le Grand Théâtre. On the square there is a monumental fountain of the early 19th century, destroyed during World War II. To the south is Rue Saint-Catherine, the busiest shopping area in the city. It is also the oldest existing street in Bordeaux. 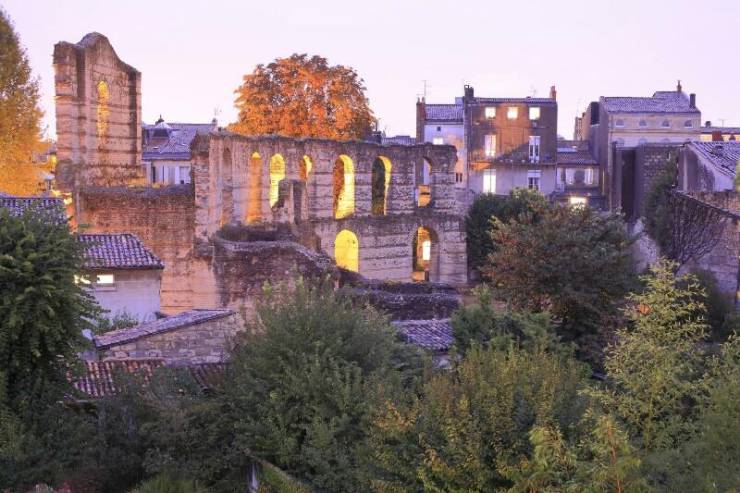 The Palais Gallien is the only surviving Roman monument in Bordeaux. This amphitheater could hold 15,000 spectators and was built in the 2nd century AD for gladiatorial fights. 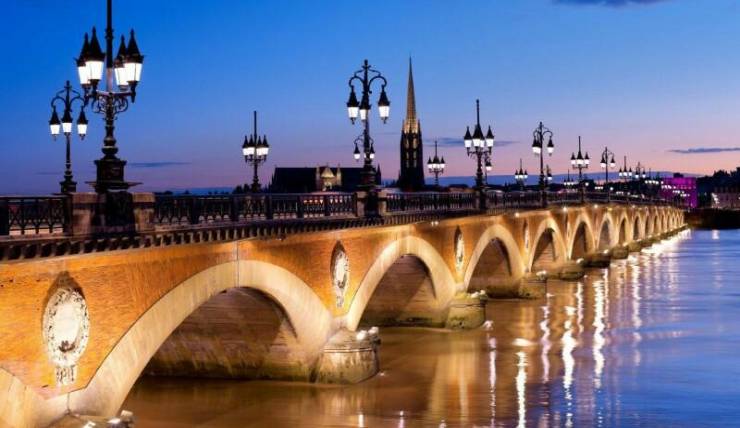 The Pont de Pierre, a stone bridge of the first half of the 19th century, is one of Bordeaux’s iconic landmarks. It crosses the Garrona and has 17 graceful arches supported by pile foundations. 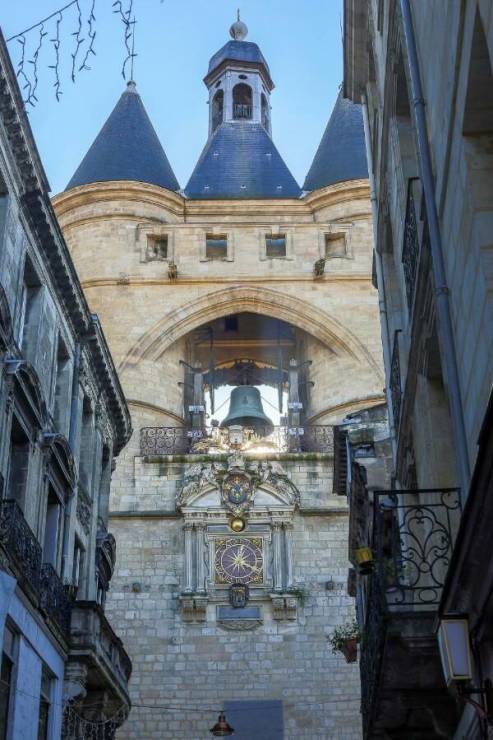 The Grosse Cloche (Grand Bell) is one of the oldest bell towers in France, located in the heart of the city. It was built in the Middle Ages. The bell on them was added in 1775. It weighs almost 8 tons. 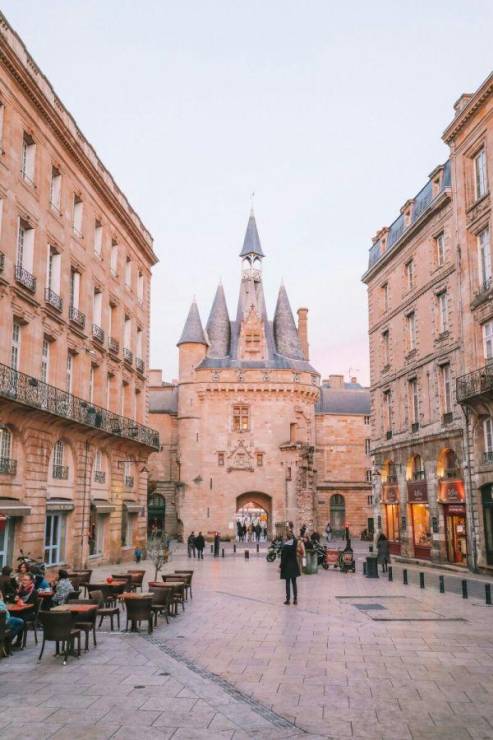 Porte Cailhau is a beautiful medieval gate of the late 15th century, built by the French king Charles VIII. It is 35 meters high and was built into the city walls. 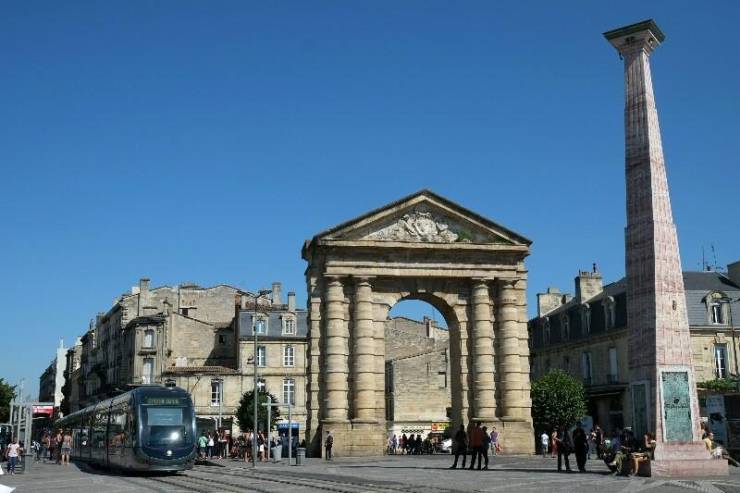 Victory Square is one of Bordeaux’s central squares, famous for its arch and marble column dedicated to the wine industry. 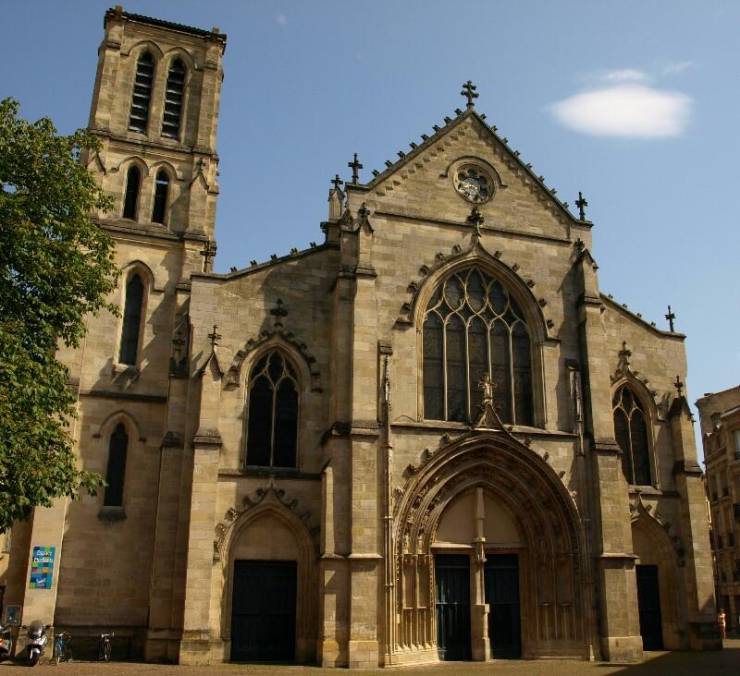 The Church of Saint-Pierre is an old French Gothic church built between the 14th and 15th centuries on the site of an older medieval 12th-century church. The church of St. Peter is one of the oldest in Bordeaux. A Christian parish has existed here since the 6th century.

Castles in the vicinity of Bordeaux 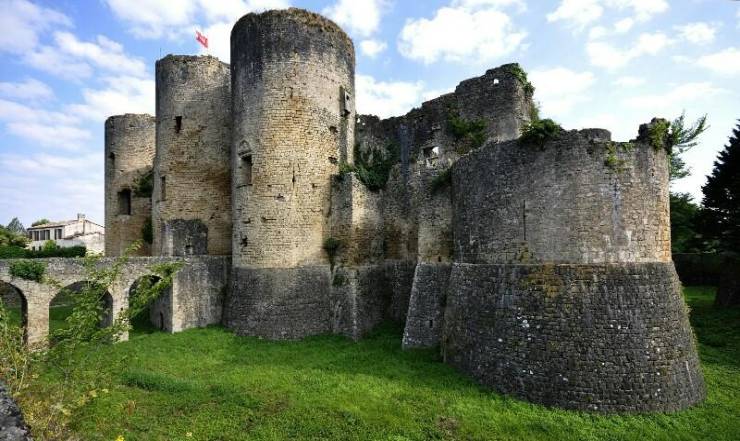 Château Royal de Cazeneuve is a beautiful medieval castle, residence of the kings of Navarra. It is located 60 km south of Bordeaux. 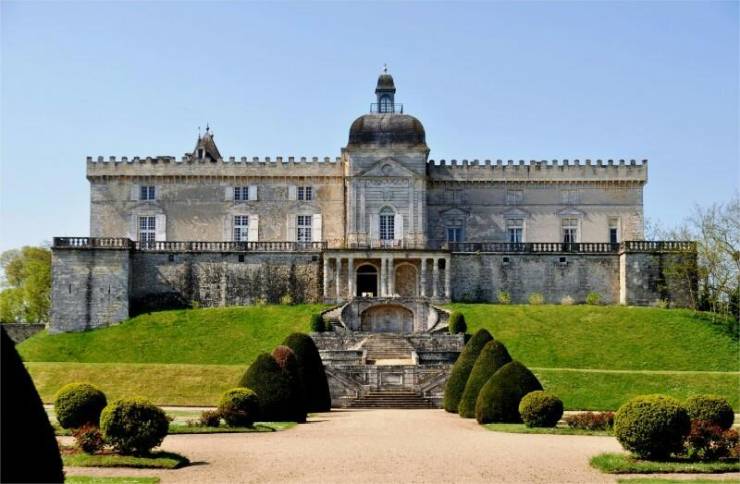 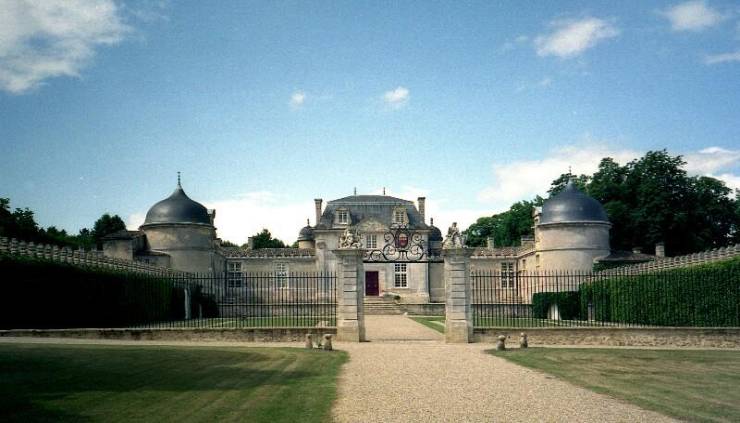 Château de Malle is a splendid residence of Jacques de Malle, built in the 17th century. The castle is surrounded by beautiful gardens in the Italian style. 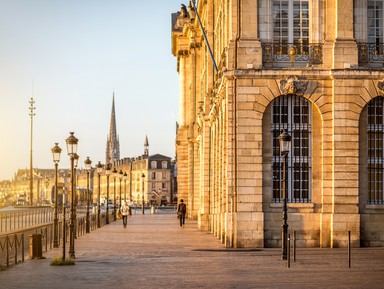 An entertaining trip to Bordeaux to discover the city and its secrets. 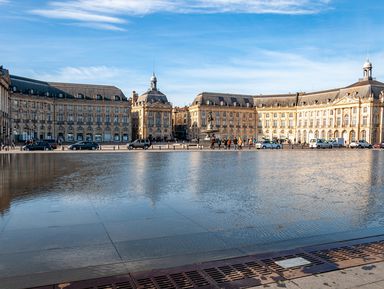 Fall in love with the atmosphere, architecture and fine wines of Bordeaux on a friendly guided tour.