Friends are known for trouble. Over the past two years, some states have opened to us, the tourists, from an unexpected side. Those who boasted of a “thousand smiles” have shown their guests a wolf’s grin. Conversely, “non-tourist” countries have shown their hospitality. Now tourists have to decide whether they are willing to endure bullying for the sake of the trip. And if they are ready, what exactly and how much. Montenegro in this ugly world has shown itself quite well. Last two years the conditions of entry changed from good to acceptable. Only, has upset recent New Year’s prank, when only the inoculated and diseased were allowed into the country. The outrage lasted ten days, and was probably due to problems with food. The small state is highly dependent on tourist traffic. Therefore, there is a chance that in the next summer season authorities will not be too brutal with the entry conditions.

However, Montenegro has an unpleasant feature: its officials love to change measures and do it every two weeks. Resolved to travel a tourist must act quickly. To quickly find a place to stay by the sea or in the mountains can be difficult. But there is a helping hand: the capital of the country – Podgorica. Near the city there is neither the sea nor the mountains, but there are high-quality apartments. The price does not depend on the season. You can rent a decent apartment in a modern house for 25 euros a day, or even cheaper.

And then think about what to do next and plan your route around the country. In spare time from these troubles, I advise to explore the capital of Montenegro.

This summer I once again found myself in Podgorica. In search of ideas for a walk, I glanced at Tourister. The city has been visited by many people. Very many. But the trouble is that almost everyone was passing through. Everyone mentioned a couple of interesting places, but nothing more. That’s when I had the idea to write something like a guide to Podgorica. To list and photograph the main attractions. And let the tourists themselves choose from my list of attractions for excursions.

READ
Bali - an unforgettable vacation in the islands of Indonesia

So, what to see in Podgorica in three days? I usually look for the answer in history. The history of Podgorica begins with the settlements of the Stone Age. In ancient times, on the slope of the rivers Moraca and Zeta was the Illyrian city of Dokleja. The Romans at the beginning of the new era made it the capital of the province. The Slavs who replaced the Romans founded their settlement a little further south, at the confluence of the Ribnica river into the Moraca, and named it after the river – Ribnica. In the Middle Ages these areas were part of the states of Duklja and Zeta. Since the 14th century, the city was called Podgorica, and it became an important trade center on the road connecting Dubrovnik, Niksic and Trebinje. In 1474 Podgorica was conquered by the Ottomans and turned the trading town into a military base. It took four hundred years to liberate the city from the Ottomans. The city immediately began to develop rapidly. Factories and even a bank opened. In 1918, in Podgorica, the National Assembly (parliament) of Montenegro decided to unite the country to the Kingdom of Serbs, Croats and Slovenes, although not all residents were in agreement with this. After World War II, Montenegro became a republic of SFRY, and Podgorica changed its name to Titograd and was so called until 1992. Since 2006, Podgorica is the capital of independent Montenegro.

Armed with historical knowledge, we set off. I suggest that we start with the oldest part of Podgorica – the ruins of ancient Dokleja, which is located three kilometers north of the modern city. The way there is interesting and picturesque. It begins from a pleasant park on Gorica Hill.

Under the hill stands the ancient church of St. George. The age of the temple is unknown, but according to experts, it is not less than nine hundred years old. This is the oldest of the active churches of Montenegro.

READ
The 10 best sights of Calella - description and photos

There are legends that from the temple to the shore of Morachi there is an underground passage. Those who wish may look for it. And we go further.

The top of the hill is decorated with the monument to Partisan fighters, erected in 1957 in memory of the anti-fascists who died. The remains of ninety seven heroes are buried here.

From the top of the hill we walk along the path down to the river and cross it over the footbridge. Then we have to walk along the highway. It is not very comfortable. But you can admire the picturesque canyon of Moraca.

The name of this city is not quite on the lips of ordinary people who are not seriously into geography and travel. However, anyone who has been to this Balkan country, located on the Adriatic Sea coast, can immediately answer this question. The capital of Montenegro is Podgorica. And it is not just the capital city, it is one of the most often visited places by tourists.

What to see in Podgorica? What sights are there in this city? About all this is told in the article.

General information about the city

Podgorica is an amazing city of a wonderful country. In fact, Montenegro has two capitals with different definitions, which are enshrined in the constitution. The official and spiritual capital – Cetinje, the actual – Podgorica, which has the status of the main city, where the government and parliament are located, as well as concentrated all the political and business life.

The population is equal to 170 thousand people (25% of the population of the state). This is the biggest city of Montenegro, and it is inland by 60 kilometers from the Adriatic Sea coast. However, it is also a resort city. On a single plain Montenegro flows five major rivers, and they capture the area of Podgorica. Through them spanned 160 bridges. A variety of nationalities live there: Montenegrins, Albanians, Serbs.

This region is surrounded by picturesque hills, amazingly beautiful and is the most attractive place for holidays. The sights of Podgorica (photo in the article) are beautiful and fascinating.

Podgorica is one of the oldest cities in Montenegro. The first settlement was situated here in the stone century. The first mention of the city dates back to 1326.

It had several names: Ribnica, Burggrurica, Bogurtlen. From 1946 to 1992 it was called Titograd, and the modern name is a historical name, which was given to it in honor of the hill on which it stands.

The first people lived here in the Stone Age. The subsequent history of these places is anchored in the narrow streets and the walls of the structures of the Old City. There are colorful mosques that have survived since Ottoman times. Its Orthodox churches are striking for their identity, grandeur and peace.

In this city is intricately intertwined centuries-old cultural traditions and business modern pragmatism. The excellences of this place, which differs from other European capitals, can be fully realized only after seeing the sights of Podgorica.

The river has its source at Mount Rzac, located in the north of the country. The Morača River flows into Lake Skadar, forming in the territory of Podgorica municipality a canyon (30 km long) 1200 meters deep. This is the second deepest canyon in the world after the Fish River canyon in Namibia. This area has become famous worldwide for the majestic beauty of the steep cliffs. Here you can especially see how human power transforms the power of nature. People have built 130 tunnels on this stretch of river, built roads and railroads, and built observation decks and bridges. 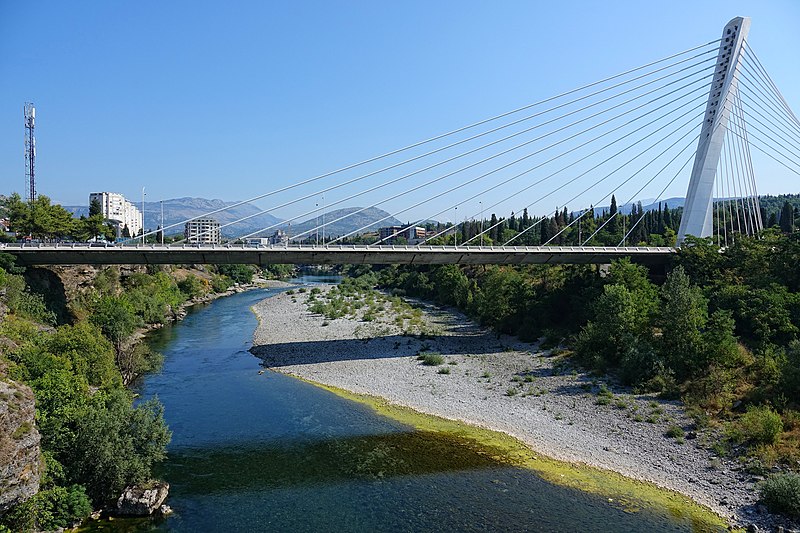 About 40 kilometers from Podgorica, at the height of 1443 meters at the foot of Komovi Mountain, there is a wonderful mountain lake – a natural landmark of Podgorica. It is rounded and small in size (210 by 130 meters). The depth of the lake is 17 meters.

READ
Seychelles - a place of paradise

There are many legends about the lake. One legend tells of fairytale dragons that lived in this lake. The people of the local tribe (bukumir) once decided to kill these formidable and mysterious monsters. They built a huge fire, heated stones, and threw them into the water. The dragons turned into local lizards, but they managed to put a spell on the tribe, which was that people who hated nature must disappear forever. That’s exactly what happened. The tribe assimilated, mingled with neighboring tribes, and disappeared as a separate people. 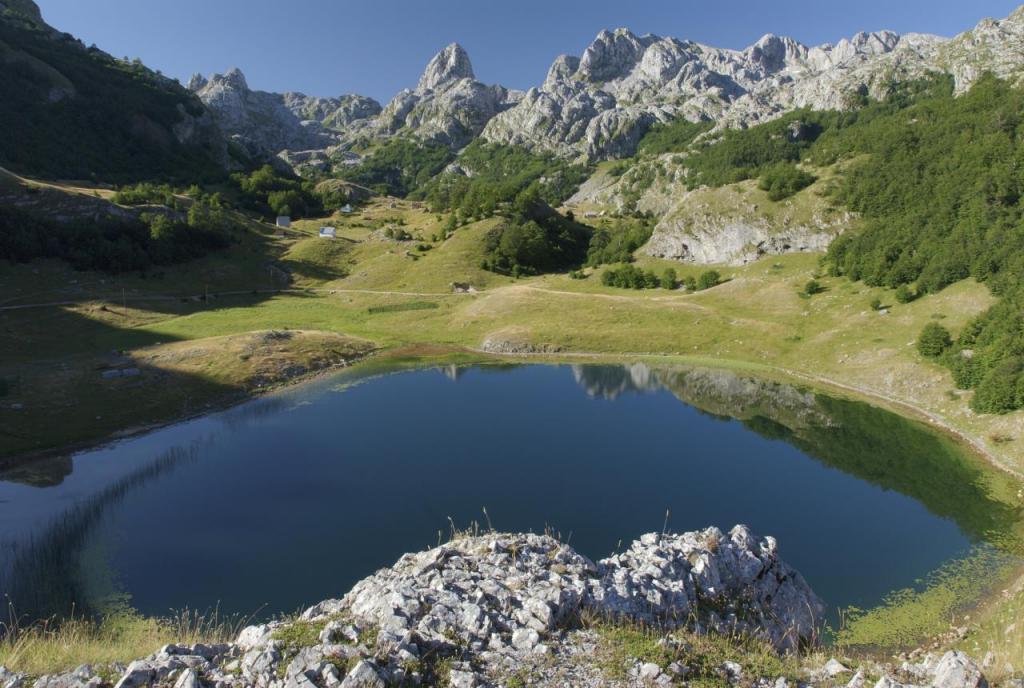 Centuries have passed since then, but the lake still gives tourists a magical holiday, full of peace and quiet, imbued with amazingly clean air. There is a good asphalt road to Bukumirsko Lake from Podgorica.

This historical landmark of Podgorica is also of interest, situated by the Gorica hill. It is situated on foot from the central part of the city.

It was built approximately in X-XI centuries and stores a few artifacts, important for Christians. The Montenegrin struggle for independence resulted in the loss of the original appearance of the building, but the church was able to preserve its architectural and cultural value. On its internal walls there are unique ancient frescos (the author is unknown), which are of great artistic value. 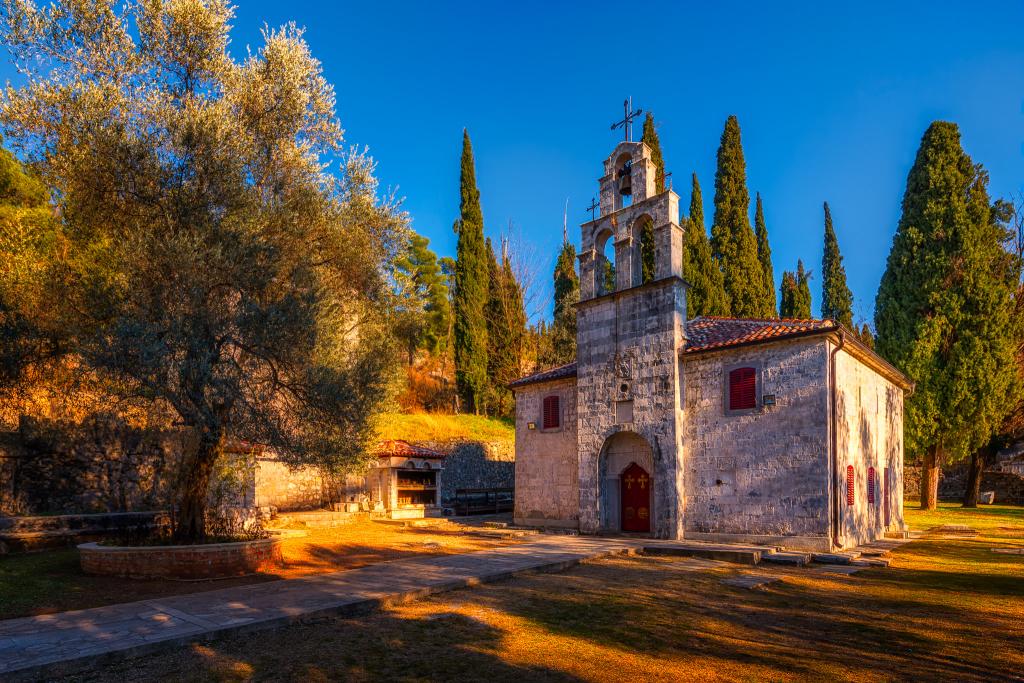 Cathedral of the Resurrection

Located in the center of Podgorica (Momyshici district) the Cathedral is the biggest church in Montenegro. The landmark of Podgorica, made in the Neobyzantine style, is covered on the front side with large unworked stone slabs of white color. On the inside, the walls of the cathedral are decorated with wall paintings. The height of the temple is 34 meters, and can accommodate 5,000 people at a time. Construction was carried out 10 years, starting in 1993.

The cathedral was built on the site of the ancient Church of the Holy Apostles, which stood here under King Milutin. It inherited great patriotic and religious traditions of Montenegro and provided a close link between the ancient spirituality and modernity. The Cathedral, which has a solemn and austere architecture, is particularly attractive with its bell tower, which weighs 11 tons.

READ
The 30 best sights in Milan - descriptions and photos 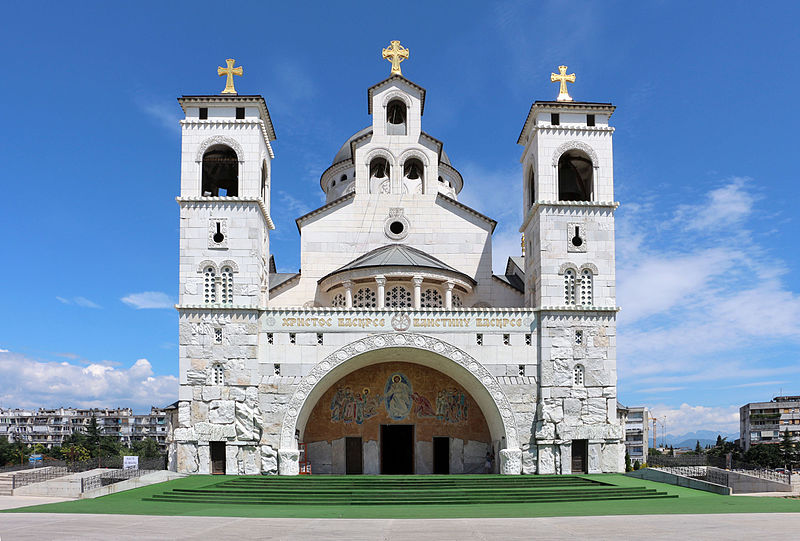 The sights of Podgorica are impossible to enumerate and describe in one story. In general, the reviews of tourists about rest in this city are positive. But there are some points that are noted by tourists who have been there.

If you decide to go to Podgorica, then only for a sightseeing tour. One day will be enough if you do sightseeing in a rental car. And it is better to eat not in tourist places, but where the locals eat. Local cafes are a good combination of good food and low prices. The most beautiful places, according to tourists, are considered bridges, especially at night.

In addition to the sights of Podgorica, tourists are also attracted by its stores. The capital of Montenegro is also the center of shopping in the country. On one section of the street there is a block with very cozy small stores, and not far away there is a “jewelry street”.