Guide to Italy: the tiny resort of Sperlonga

Italy is a multifaceted country, offering tourists all kinds of holidays. Some tourists are attracted by the historical sites and architectural monuments, some go to ski resorts, some go to agritourism, some bask in the sun, some go shopping… Our today’s article is dedicated to lovers of beach holidays and we hurry to tell you about a wonderful sea town on the Tyrrhenian Sea called Sperlonga. 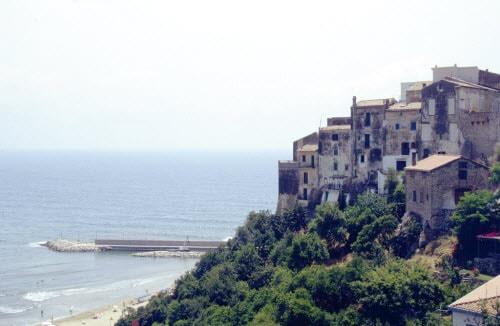 The name of the town of Sperlonga (Italy) comes from the Latin word speluncae: it means the caves of natural origin characteristic of the southern coast of the Tyrrhenian Sea. The place was originally built as a quiet fishing village. Some historians claim that the settlement was founded by the Spartans. The inhabitants of ancient Sperlonga often suffered from the raids of sea pirates, so they were forced to move into the caves. There they decorated their rooms and lived in arranged grottoes.

During the Roman Empire, Sperlonga became surrounded by villas and mansions of noble Romans. One of these country residences owned by the Emperor Tiberius. On his property was a grotto, fitted out as living quarters, which were in turn decorated with statues of famous heroes from the Odyssey. Today this grotto is one of the main attractions of the resort.

The fall of the Roman state had its effect on the fate of Sperlonga. The tiny town became a popular destination for brigands and warlike peoples. Despite much destruction, the settlement grew again and continued to live its usual life. Eventually, the locals erected an impregnable wall with a gate that reliably protected Sperlonga from new invasions by foreigners and invaders. Even today, visitors to the town can see the remains of the ancient defensive structure.

In the X century, in addition to the wall, there was a Christian church in Sperlonga, consecrated in honor of St. Peter. Over the centuries, the territory of the coastal town belonged to the Kingdom of Sicily and the Kingdom of Naples. In 1861, like all the other cities of the Apennine Peninsula, Sperlonga became part of the united Italy.

Tourism in Sperlonga appeared only at the end of the 50s of the last century. It was the construction of the road between Gaeta and Terracina that gave the impetus for the development of this area. From 1958 onwards Sperlonga became famous for its beaches which attracted Italians themselves, celebrities and foreign tourists.

Sperlonga is one of the most attractive spots on the Tyrrhenian coast. The architecture of this small town reminds you of Hellenistic Greece, the cleanliness and beauty of the coastal area and the cozy, calm and measured pace of life.

The seaside town is located in the central part of the boot-country, in one of the most famous Italian regions – Lazio. It is here, on the coast of Riviera di Ulisse, where you can enjoy an unforgettable holiday away from the stone jungle and the hustle and bustle of the city. The picturesque resort is well located on the Cape of San Marino. To get to Rome, a tourist from Sperlonga will have to cover a distance of 116 km, to Naples it is 2 km less – 114 km.

Sperlonga is home to three thousand permanent residents. However, during the vacation season, the tiny town manages to accommodate about thirty thousand people on its territory. The resort’s moderate climate pleases tourists with an early onset of the bathing season. Travelers come here as early as April. Low precipitation and an impressive number of clear and sunny days are the main factors in choosing this place for a vacation.

The coastal resort offers its guests to enjoy bathing in the clearest waters of the Tyrrhenian Sea, to laze on the well-kept beaches, which, incidentally, are constantly awarded the “Blue Flag”, to engage in water sports, make fascinating promenades through the streets of the city, buy souvenirs for friends and relatives in numerous stores and stalls, “to rock” in local nightclubs, taste traditional Italian cuisine in the resort restaurants, learn the history of the city in the local museum or take your free time in the “Golden Ring”.

How to get to Sperlonga?

You can get to the cozy town on the Tyrrhenian Sea coast by:

Like other Italian resort towns Sperlonga has a sufficient choice of hotels for all tastes, preferences and financial capabilities of its guests. Below is a list of five popular hotels of the town.

Please note! There are no five-star hotels in Sperlonga resort.

Despite its small size, Sperlonga has interesting attractions worthy of your attention. We will tell you about them below.

1. Villa Tiberius. The famous object of the era of the ancient Romans is located three kilometers from Sperlonga. The Villa of the Roman Emperor also includes a grotto and cave of the same name, which has two swimming pools. The ruins of this historical monument were found by the workers who were building the highway between Terratina and Gaeta in 1957. Most of the finds were fragments of marble statues, some from the Hellenistic era (about 180 B.C.). Historians speculate that the statue fragments were collected by monks who lived here during the early Middle Ages. The cave, grotto and villa contained approximately five hundred statues. Villa Tiberius at the time of its existence was a full-fledged dwelling consisting of several buildings. The terraces of these buildings “looked out” to the sea. At the center of the villa there was a courtyard around which there were huts and structures with living rooms, kitchens, and other outbuildings. In the grotto of Tiberius there is also a cave with pools which in the first century was decorated with sculptures of heroes of ancient Greek myths.

On a side note: the statues from the Villa of Tiberius were made by Agesander, Athenodorus and Polydorus of Rhodes. This is known from an inscription found in the cave itself. The same masters created the marble sculptural group “Laocoon”, which was found in the Thermae of Titus (Rome) and was made in the I century BC. Today this Rhodesian creation is in the Vatican.

2. the Archaeological Museum. The foundation of the National Museum of Archaeology in Sperlonga dates back to the early 1960s. The institution is located near the entrance to Villa Tiberius. It is in this building that you will see those statues that were found during excavations in the cave of the Roman emperor. The most famous are “The Abduction of Ganymede by the Eagle of Zeus”, “The Blinding of Polyphemus” and “Odysseus Holding the Body of the Slain Achilles”. In addition to the marble sculptures, the archaeological museum has ritual masks and other exhibits dating back to the second century B.C.

3. Church of Santa Maria. This religious landmark of Sperlonga is located in the historic center of the resort. The Church of Our Lady was built in 1135. The church consists of two widening naves. Inside the building, namely in the chapel of the church, there are valuable frescos dating from the 12th century. The basilica was for a long time in a terrible state, but the church of the Virgin Mary has recently been restored and today serves as a place for cultural events.

The historical center. The most interesting part of the city in terms of history occupied the top of the hill. It is here, among the distinctive streets riddled with a colossal number of beautiful but steep staircases, that you can enjoy the extraordinary panorama of the lower part of Sperlonga and the view of the Tyrrhenian Sea. In this part of the resort you will encounter three observation towers built during the Middle Ages: Torre Capovento, Torre Trullia and Torre del Nibbio, the Sabella Palace, built in the XIV century, the Church of St. Mary and St. Rocco.

Please note: it is forbidden to enter the historic part of Sperlonga by car.

5. Beaches. Of course, the main natural attraction of Sperlonga are the town’s beaches with azure clear waters and golden colored sand. The resort divides the coastal strip into two parts: eastern (from Sperlonga to Lido di Fondi) and western (from the town to Tiberius Cave). The beaches of Sperlonga are recognized as some of the most picturesque in the province of Latino. The resort authorities offer visitors both paid and free beach areas. The entire coastal area is equipped with lifeguard towers, toilet and shower stalls, comfortable descents into the water. Some beaches have volleyball courts, children’s and sports grounds. You can rent an umbrella, a beach chair and equipment for water sports as well as quench your thirst and “soak your worm” in one of the coastal cafes or restaurants. There are six beaches in Sperlonga: Della Fontana (free of charge), La Canzatora (family preferred, a small free of charge beach with stones), Bazzano (paid beach, a favorite place of the youngsters), Delle Salette (paying beach with many people), Dell’Angolo (free of charge and stony area), Delle Bambole (the most remote and small beach in Sperlonga with a bottom of pebbles and poorly developed infrastructure).

6. The tomb of Cicero in Formia. This interesting site is a mausoleum from the Roman Empire. Many historians and archaeologists believe that the tomb is near Cicero’s luxurious villa, which, unfortunately, has not survived. The historian Strabo wrote that the famous orator loved Formia and spent much time in the city. It was here that Cicero was murdered. The tragedy took place in 43 B.C. According to legend, the remains of this great man rest in the city of Formia, not in Rome.

7. The Temple of Jupiter Achnurus in Terracina. The famous attraction of the resort of Terracina is located on the top of a 200 meters high mountain called Saint Angel. The temple dedicated to Jupiter of Anxuria was built by the Etruscans in the 4th century BC. In former times, ceremonies were held inside the site to worship the main deity of the Roman Pantheon, Jupiter. Today we can see only the remains of the majestic building, namely the lower level of the sanctuary with two temples and terraces. The floors of the sanctuaries have partially preserved the ornaments of the ancient mosaics. Archaeologists are striving to recreate the true size of the temple. According to the original data, the ancient Roman landmark was of impressive size.

The peaceful resort of Sperlonga (Italy) will be an unforgettable vacation destination for those who want to escape the noise and rest from the hectic pace of city life. Clean beaches, century-old history, comfortable restaurants and hotels, as well as the successful location of the town allows you to enjoy a pleasant holiday abroad with health benefits and enrich your knowledge of the history, culture and life of the Italians of this settlement.