The Monastery of St. Gall, or St. Gallen Abbey, is a UNESCO World Heritage Site monastery of the Benedectine order in St. Gallen, Switzerland. It is considered one of the most outstanding extant monasteries of the Carolingian period. According to legend, in 612 the Irish missionary St Gall founded the monastery in honor of a miraculously ended encounter with a bear: the saint managed to “persuade” the animal not to attack. Or rather, he originally set up his cell and a small prayer room here, and the monastery itself came a little later. For more than a thousand years, the monastery was one of the most influential in Europe.

First of all the cathedral, built in Baroque style at the end of the XVIII century on the site of an old temple built in the XIV century, attracts attention. Its eastern facade is crowned by two towers with onion-shaped domes. Their height is more than 70 meters, they are elegantly decorated and adorned with a clock. The front pediment of the cathedral is decorated with a fresco depicting the Assumption of the Virgin Mary, below it there are sculptures of Saints Maurice and Desideria. The northern facade is decorated by statues of the apostles Peter and Paul and the saints whose names are closely linked to the history of the monastery – Gall, who founded it, and Otmar, who became its first abbot.

The cathedral impresses both by its architecture and interior decoration: abundance of gilding, stucco, paintings. The central nave and rotunda were designed under the direction of architect Peter Tumba, who also supervised the decoration of the monastery library. The choir was designed by Johann Michael Weyer and the east façade by Joseph Anton Feuchtmeier. The Empire style altarpiece was designed by Josef Mosbrütter and the dome was painted by Christian Wenzinger. The wall frescoes are by Johan and Matthias Ghigley.

READ
Saxony, Germany - the land of castles and excursions 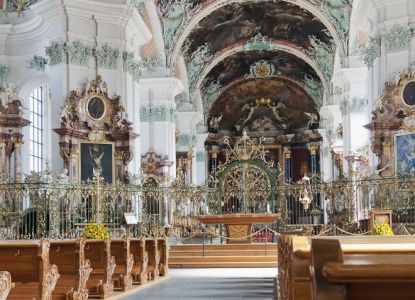 In addition to the cathedral, worth seeing are the round tower and the Charles Gate, preserved from the time of the old monastery complex, as well as the New Palace, the Arsenal, the Children’s Chapel designed by Felix Kubli and the Galla Chapel, built in 1666. The monastery courtyard is surrounded on three sides by Baroque buildings that house the school, the bishopric and the administration of the canton, of which St Gallen is the capital.

Next to the monastery is the Protestant church of St. Lawrence, built in the Gothic style. Together the church and the cathedral seem to symbolize the contradiction between the pomp and pageantry of Catholicism and the austere asceticism of Lutheranism.

The library of the monastery of St. Gallus is recognized as one of the most beautiful and certainly the oldest in the world, dating back to the eighth century. It has been declared a World Heritage Site both for its architectural value and for the unique collection of books that it houses, considered to be one of the most important in Europe. Today the library has over 2,000 ancient manuscripts dating from the 8th to 15th centuries, including ancient Irish manuscripts, a Latin handwritten Gospel, ivory tablets from around the year 900, a manuscript of the Song of the Nibelungs, and several scrolls over 2,700 years old.

Visitors are given special slippers at the entrance, because the inlaid wooden floor is also a piece of art. You should know that it is strictly forbidden to take photos or videos in the library.

How to get to the monastery?

You can get to St. Gallen by train from Zurich. The spires of the cathedral will be visible from the train station; you will need to cross the road (there is a tourist bureau) and walk in a straight line and then to the left.

READ
The 36 best sights of Amsterdam - descriptions and photos

How to get there By train from Zurich. Swiss Railways From the train station directly across the street is the tour desk. Then straight ahead and to the left, the landmark are funny statues of bears, but if they are not there when you visit St. Gallen, you will still know where to go – there, where the spires of the cathedral rise high into the sky.

The city is a UNESCO World Heritage Site thanks to its distinctive 18th century Catholic cathedral and its ancient library, which keeps around 2,000 manuscripts, each one 1,000 years old or more, among its many volumes.

The monastery of St. Gall, now located in the Swiss town of St. Gallen, was in the Middle Ages one of the largest Benedictine monasteries in Europe. In 1983, it was listed as a World Heritage Site as “a perfect example of a great Carolingian monastery.

The founder of the city (then a monastic hermitage), according to one version, is considered to be an Irish monk-traveler named Gallus, who settled here in 612. One day he met a bear in the woods and was very frightened, but he spoke to it, and oddly enough, the bear understood him.

Rumor has it that the ancient sculpture depicting St. Gall, which stands at the entrance to the library, bears this bear. In the eighth century a successor of the founding father, Otmar, founded a school of scribes and translators at the monastery; in the ninth century the abbot Gozbert founded the library, which made his name famous and brought glory to the monastery.

In front of the monastery is the Gothic Protestant Church of St. Lawrence (there was a church on this spot in the IX century), inside everything is austere, as if in spite of its neighbor – the cathedral, where late Baroque is in full bloom.

The church and the cathedral are still separated from each other by a high wall, which once separated the Protestant city from the Catholic abbey.

The layout of the monastery in the Middle Ages

The cathedral is surrounded by spacious lawns of emerald grass, on which the young lounge imposingly. Ah – the famous library was closed for repairs! Its buildings are shrouded in a construction grid and surrounded by scaffolding.

But we don’t despair, and go around the abbey in a circle. What remains of the medieval town are fragments of walls, wide gates with narrow loopholes, and even a mighty bastion tower.

When we pass through the gate, we can’t help but gasp in admiration: how beautiful the cathedral is! It was planned and built at the end of the eighteenth century, and the seat of the local bishop has been next to it ever since. Inside – spaciousness and gilding, large-scale paintings, ornate carvings, in general, everything that was needed for a man to feel small and insignificant. Perhaps the Cathedral of St. Gallen, the Cathedral of St. Urus in Solothurn, and another church in Lucerne (about it – in due course) can be compared with the Roman masterpieces of the Baroque, for they are masterpieces.

We never saw any lace. And in general tradition of local weaving and lace weaving goes back to the XV century. Across the road in a quiet street there is St. Catherine Monastery (1228) which we could only see from outside because it has been used as a library and exhibition place long time ago.