In October 2000, by decision of the Synod, the parish church of St. Demetrius of Thessaloniki in Chadyr Lunga was transformed into the St. Demetrius Nunnery (according to Abbess Elisaveta). The Orthodox church in honor of St. Demetrius of Thessaloniki is a double-domed church. It was registered 17.11.1993 in the State Service for religious affairs and cults, certificate number 705. St. Dimitriy’s Nunnery is located on the southwest side of the city of Czadyr Lunga, on a hillside. The architectural complex of the monastery is visible from the road to Ciadir-Lunga from the village Baurci, as well as from the central highway. Baurci, as well as from the central part of the city. The main gate overlooks the street leading to the outskirts of the city and beyond. To the east and north sides the territory of the temple and monastery is surrounded by a stone fence and adjoins the residential buildings; to the south and west sides there is no fence and it goes out to the hillside. The convent of St. Demetrius is an architectural complex of several buildings with individual purposes. The building of a two-tiered church of St. Demetrius of Thessaloniki has a two-tiered structure, and its architecture is not typical for Orthodox churches in the region of ATU Gagauzia (Gagauz-Yeri). The ground floor, or lower chapel, is consecrated in honor of St. Nicholas, Archbishop of Myra, the Wonderworker. There is an iconostasis and a number of icons. The space of the temple is divided into three parts by arches. There are practically no paintings on the walls of the lower side-altar, but there are large icons and stories on the biblical themes. There is no internal dome, as the church of St. Demetrius of Thessaloniki is located directly above the church of St. Nicholas. The total area of the lower side-altar does not exceed 70 sq.m. In the second tier of the structure – the upper limit, there is a church of St. Demetrius of Thessaloniki, the structure and interior decoration of which is typical for our region, except that the church has only two entrances. The main hall is equipped with spacious choirs. The iconostasis looks more modest than in most Orthodox churches of Gagauzia. The parts of relics of St. Demetrius of Thessaloniki are kept in the temple. The bell tower is an integral part of the building of the temple. The interior courtyard, on the second tier of the temple structure, has a grassy lawn and a small garden made of fruit trees at the bottom edge of which there is a belfry in the form of a crossbar with seven bells hanging on it. In front of the bell tower is a special wooden platform, on which the bell ringer ascends during the chime. The small bell has an approximate diameter of 0.25 m at the lip, the diameter of the main bell is about 1.2 m at the lip. The building of the two-domed Church of St. Demetrius of Solunskiy has two domes, the main dome is of faceted type. The dome of the bell tower is made in hipped style. In addition to the bell tower and the main cupola there are 2 small onion-shaped domes on the east side of the roof. The building is made of stone, the thickness of walls is about 50 cm, the height of the main dome is 16 meters, the height of the bell tower is 18 meters, the total internal area of the church is 264 square meters [16]. It was built from 1989 to 1994. The church was named in honor of St. Demetrius of Thessaloniki, as well as in memory of the church of the same name, which was built in 1913 and exploded on September 11, 1972, by order of the authorities [17]. In the perestroika period the head of the initiative group that advocated the revival of the Ciadir-Lunga Orthodox parish and the construction of a new church of the Holy Great Martyr Demetrius of Thessaloniki, the dean of the Comrat district churches from 1988 to 1991. 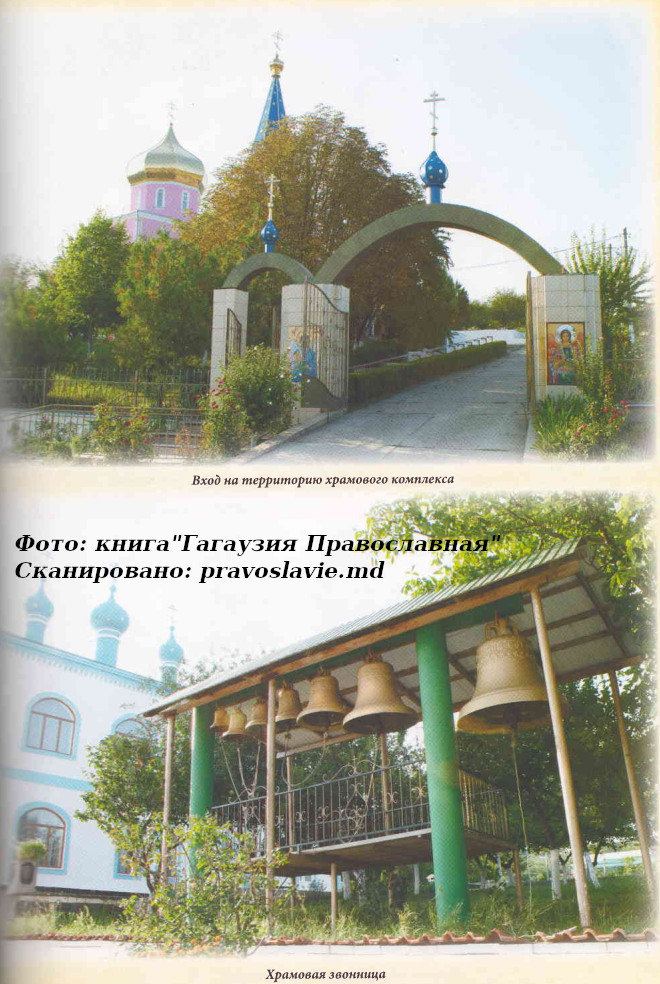 Dmitry Kioroglo failed to obtain permission from the district authorities to build a new church on the site of the exploded church [17]. Therefore, the construction of a new church was laid on the southwestern outskirts of the city, away from the hustle and bustle of the world, where it is located today. The reverend Dmitry Kioroglo personally participated in laying the first stone in the foundation of the temple, the first rector of which he later became. In the summer of 2009. Holy Synod of the Russian Orthodox Church in the monastery was appointed abbess – Abbess Elisaveta (Popova) [17]. 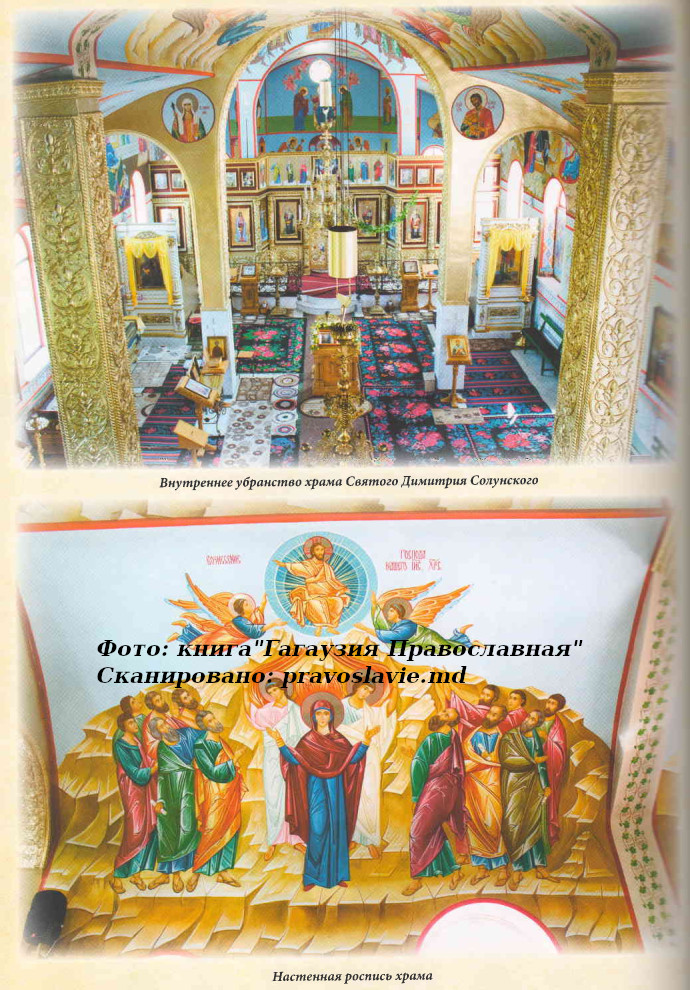 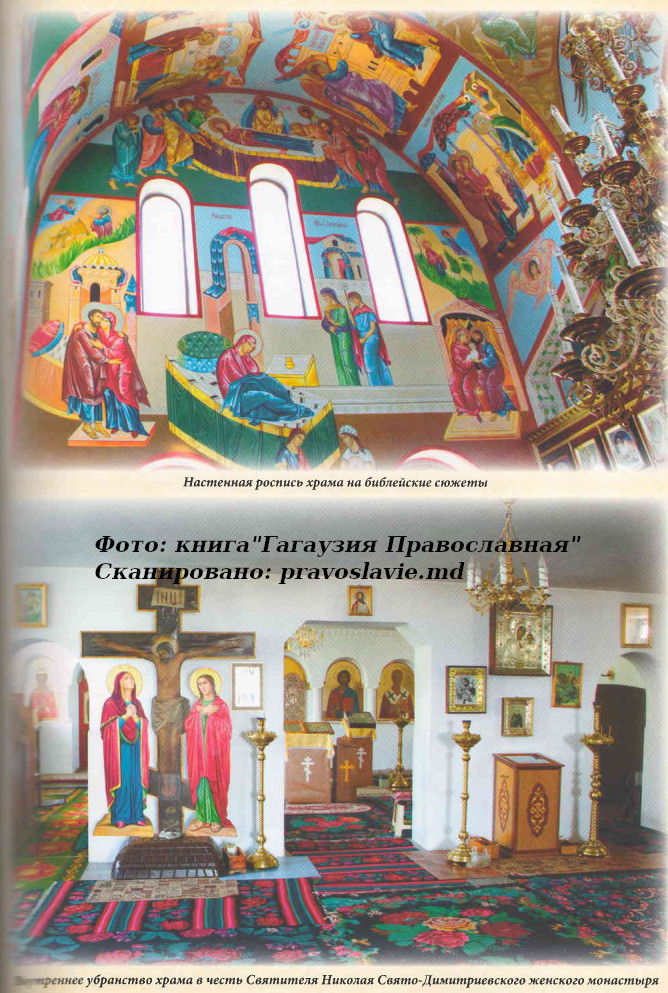 In 2014, a two-story hotel was opened at the monastery, next to the building of the old refectory and the cells of the monks. In 2018, the construction of a new spacious refectory and kitchen was completed. On the territory of the monastery there is a vineyard and greenhouses in which vegetables are grown for its needs. Work on the improvement of the St. Demetrius Nunnery is carried out continuously. Services in the church are regularly held in Church Slavonic, Moldovan and Gagauz languages. In addition, private services are performed – baptisms, weddings, consecrations, burials, and more. Sermons are also preached regularly, in the language most familiar and accessible to the parishioners.

Additional and more detailed information about the history of the St. Demetrius Nunnery in the town of Chadyr Lunga is available. Ceadir-Lunga can be obtained from the following sources and materials: district archives, archives of the Moldovan Metropolitan Church, the National Archives of the RM, Internet resources, etc.