Those who have been to Switzerland, with certainty, can say that its cities are like fairy tales. There are small towns in Switzerland, which make a big list. Some of them are included in the ratings of the best tourist destinations in Europe.

And separately consider the most picturesque little Thun – 21.7 kilometers.

The tiny commune, which became famous for its scenic views, now plays the role of a climatic health resort. The village began to develop under the monastery. Emperor Conrad III gave it great opportunities for development. Now Interlaken has become known as a resort. From here many travelers begin to explore the Jungfrau region. Interlaken is a place where avid extreme climbers can test themselves. Not everyone can stay at an altitude of about 3,500 meters for a long time. 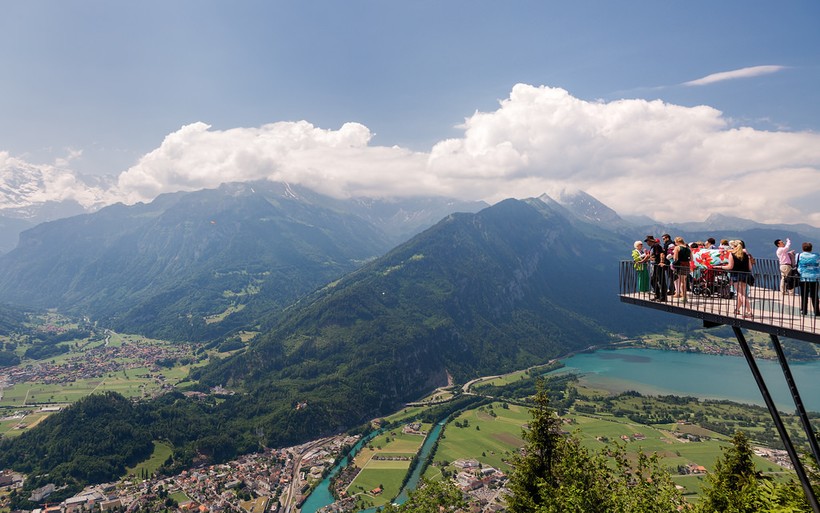 If there were a top list of the highest stations in Europe, the local train station would definitely be on it. Interlaken is loved by climbers who strive to conquer the mountain “Sphinx”, the height of which exceeds 3.5 kilometers. The idea is worth it, because on the mountain there is a platform, which offers an excellent view. Also here is an observatory, leading the list of the highest observatories in Europe. Interlaken is also loved by other representatives of extreme sports:

So if you are an avid sportsman, you should definitely put Interlaken on your travel list.

The small village of Mürren belongs to the municipality of Lauterbrunnen. It is a very nice little town, which is located at an altitude of 1,650 meters above sea level. There are no cars, and the views of the local mountains are delightful. Tourists come here to enjoy the local scenery and hiking. At the same time Murren is a famous ski resort. 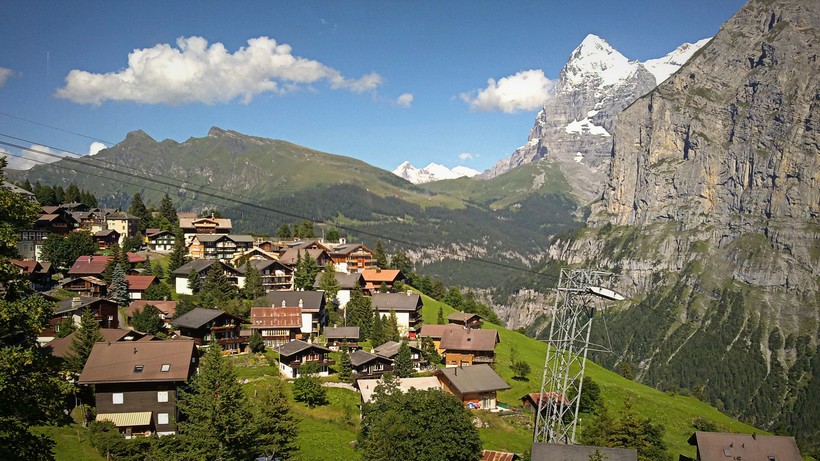 There are literally 500 people living here. It is not easy to book a room at the local hotel, as hotels cannot take more than 2 thousand tourists. If you happen to visit here, it is worth visiting the restaurant “Pitz Gloria”, noted in the shooting of one of the films about James Bond. The resort hosts such famous sporting events as the Inferno Marathon and Triathlon.

Spitz is a cute little town on Lake Thun

The mountain scenery and views of Lake Thun make travelers come to Spitz in droves. The history of this town goes back to the 10th century B.C. Even before its founding, this area was inhabited by many different tribes. And in the 10th century AD the castle was founded here. Wine making was the first city-forming business, which was promoted by the comfortable climate and sunny weather. Even now you can taste the local wines, which can pleasantly surprise any sommelier. Spitz is filled with small houses, typical of purely Swiss villages. 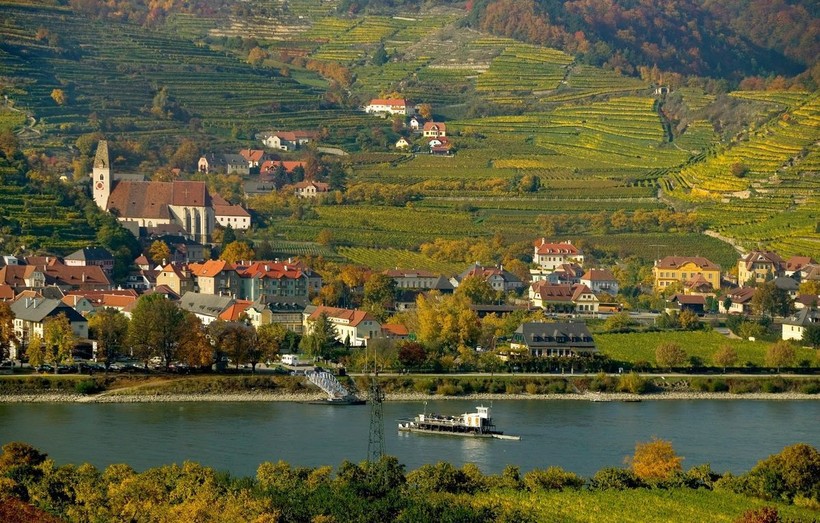 There are a lot of flowers, greenery. The most interesting attraction of the city is the medieval castle. Any tourist can visit it and see the old paintings, beautiful furniture, and near the castle walk through the park. Thanks to the lake there is a unique atmosphere. To learn more about the local secrets of wine making, you should go to the wine museum. Not far from Spitz are other castles, cable car, which runs a cable car, it will take you to the highest point of the local peak. Of course, you can climb on your own, but it is not an easy challenge, because the stairs have 11,600 steps. Locals love to play tennis, go sailing and hiking.

Thun is located near the lake of the same name. The city is among the ranks of some of the most interesting European cities. A big plus traveling to Thun is an abundance of excursions. However, just enjoying the local views that adorn the lake and the mountains is worthy of the highest praise.

READ
The 10 most perfect and successful achievements in history 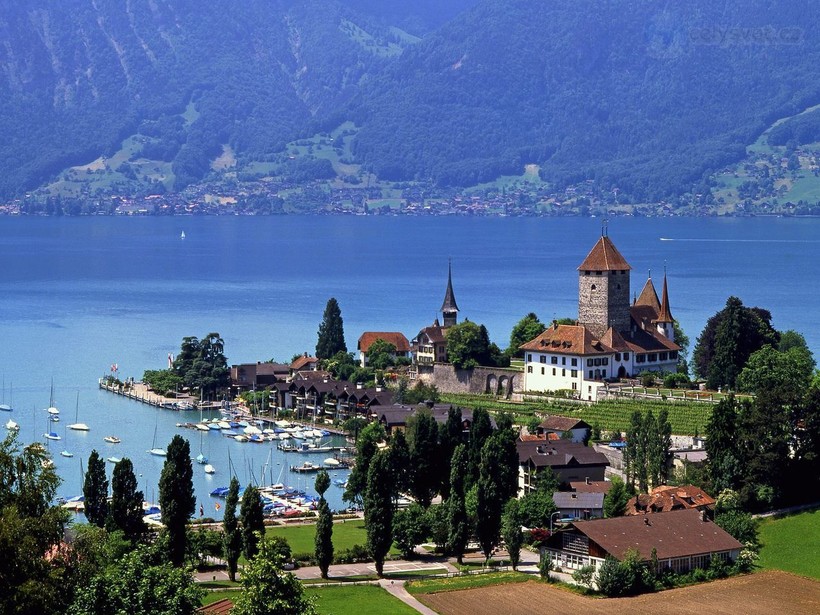 Thun is located in northwestern Switzerland, with the lake literally framing it. The Aare River also runs through the town. The air here is always fresh, but not so thin, as the height above sea level barely exceeds 550 m. The first settlements here appeared many thousands of years ago. As usual, the main city-forming building was the castle, which was ordered to build by the Duke of Tseringen. Thun is rightfully considered one of the most interesting cities in Switzerland, because for only 3 hours you can see really memorable sights. First you can go to the Old Town. There are many beautiful houses, small stores and souvenir shops. Here you can also book tours that will familiarize you with the locals, allowing you to understand the intricacies of their craftsmanship. There are streets in the old city, which residents decorate with flowers. The famous Oberehauptgasse has two tiers, which makes it unique in architectural sense. Not far from this street is a restaurant that serves traditional Swiss food. The restored church still makes an appropriate impression. The structure is very beautiful thanks to the baroque style, which is combined with the strict lines peculiar to the Reformed church. It is not at all difficult to find, as its tower is clearly visible from anywhere in the city.

The main attraction of Thun remains the castle, built closer to the XIII century. Many people associate it with a fairy-tale fortress – small but graceful, it includes a knight’s hall with a collection of medieval weapons. Inside, artifacts and antique furniture are housed. The castle serves as a museum of pottery, reminiscent of the time when Thun was the center of pottery production. Tourists especially enjoy a walk through the local park, gardens and terrace. The last point of the visit is Schadau Castle, which is surrounded by a luxurious park. The building dates back to the 19th century and was commissioned by a prominent banker. The neo-Gothic style has become dominant, and there is a museum nearby with a display of wicker objects. For now, the castle is under renovation, but in the summer of 2019 it is promised to open to the public.

The 10 most beautiful cities in Switzerland

Ironically, not always the most beautiful cities are also the most popular. The top 10 most popular cities in Switzerland are based on the number of tourists who have visited a particular city. However, popular resorts are not always so beautiful in terms of architecture.

The 10 most beautiful cities in Switzerland are my personal selection that can help you plan your itinerary in Switzerland. Together with the 10 best excursions in Switzerland, this will be a series of must see in the country.

Top 10 most beautiful cities in Switzerland

The basis for inclusion in this ranking is the beauty and authenticity of the old town, the beautiful natural views and the inherent charm of the city that reflects Swiss culture.

Switzerland’s most beautiful city, Lucerne is adored by all tourists. You’ll find a picturesque old town with painted houses, a majestic lion sculpture carved into the steep rock, and most importantly, a 14th-century covered wooden bridge spanning the River Reiss, whose tower towers over the jagged peak of Mount Pilatus.

Zurich is the gateway to Switzerland for many tourists. Maybe I’m biased (I live in Zurich and the site was originally designed specifically for Zurich), but I personally love the old city of Zurich with its medieval houses, preserved even from the 13th century, with its Lindenhof hill with a great view on the Grossmünster tower and Fraumünster, on Lake Zurich and the range of Alps on the horizon, and with its quiet craft streets of Shipfe, a shady paradise in the heat of summer. 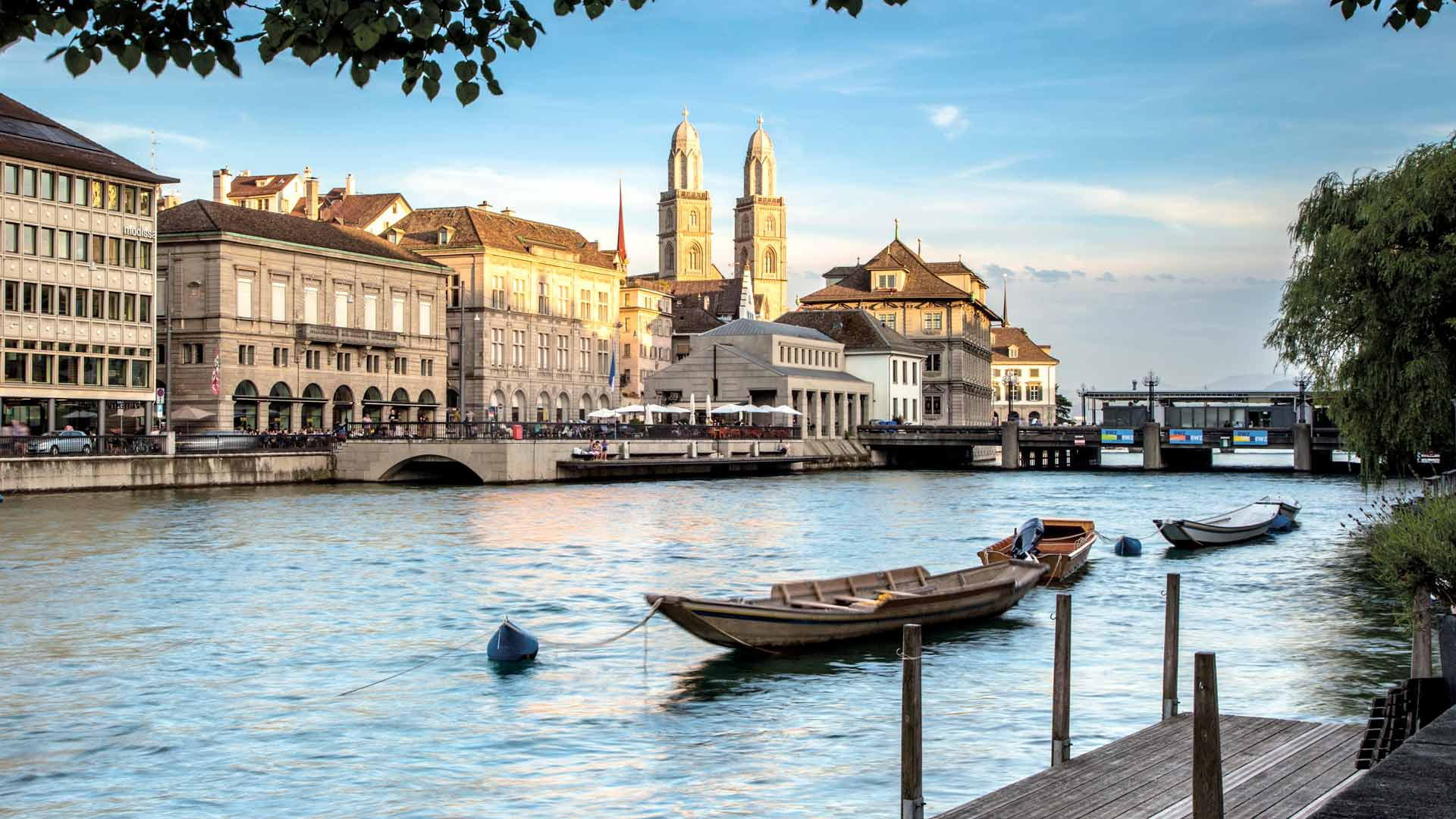 Stein am Rhein, a tiny town not far from Lake Constance, in northeastern Switzerland, captivates all tourists with its lushly painted houses. Especially fairy atmosphere here at Christmas, when all this beauty is complemented by a dressed up Christmas tree with lights.

READ
The 10 most beautiful beaches in the Caribbean 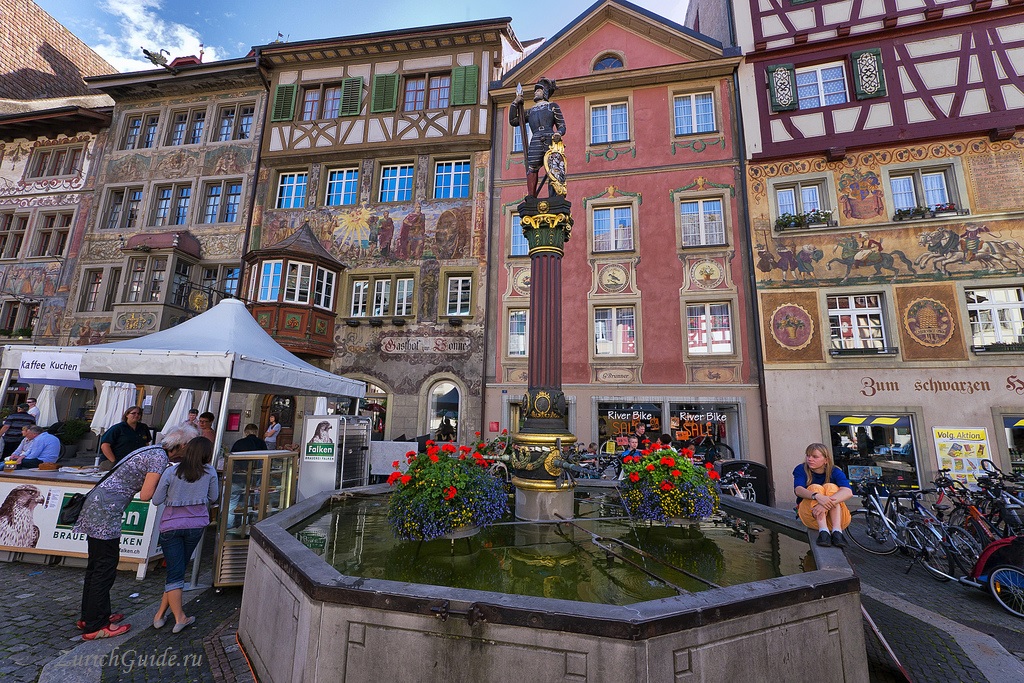 Thun is a picturesque medieval town located on the lake of the same name in the Central Switzerland, south-east of Bern. The castle of Thun as if descended from the pages of children’s fairy tales. And where else can you walk on the roofs of stores in peace? But in Thun you can, as the streets here are… two-storey!

Bern is the bureaucratic and official capital of Switzerland. To some extent the architecture corresponds to its function – gray orderly wide streets and a clock tower as the main attraction. But in summer the many fountains of Bern and its windows are decorated with bright red-green geranium bushes, and the high bridges offer spectacular views of the emerald green river. And it is impossible not to mention that the beautifully preserved old town of Bern with its arcades is a UNESCO World Heritage Site. 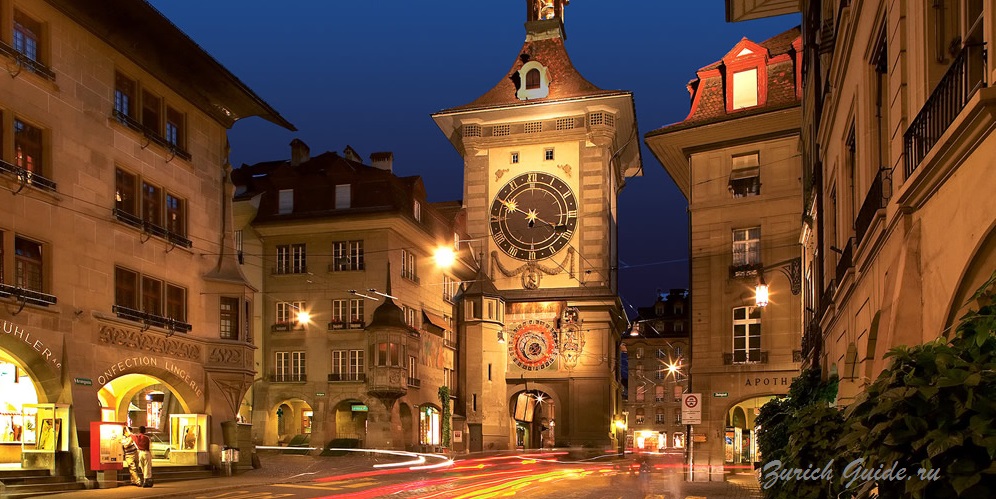 Gruyere is a tiny medieval town located on a hill in the French-speaking part of Switzerland, not far from Fribourg. Gruyere is famous all over the world for its cheese and from the architectural point of view it attracts with its charm of an old town, grown near the castle of the counts of Gruyere. Gruyere Castle is one of the most popular in Switzerland. And completing the traditional ensemble is the fantastic “Alien” Giger museum and cafe-bar, made in the same style. 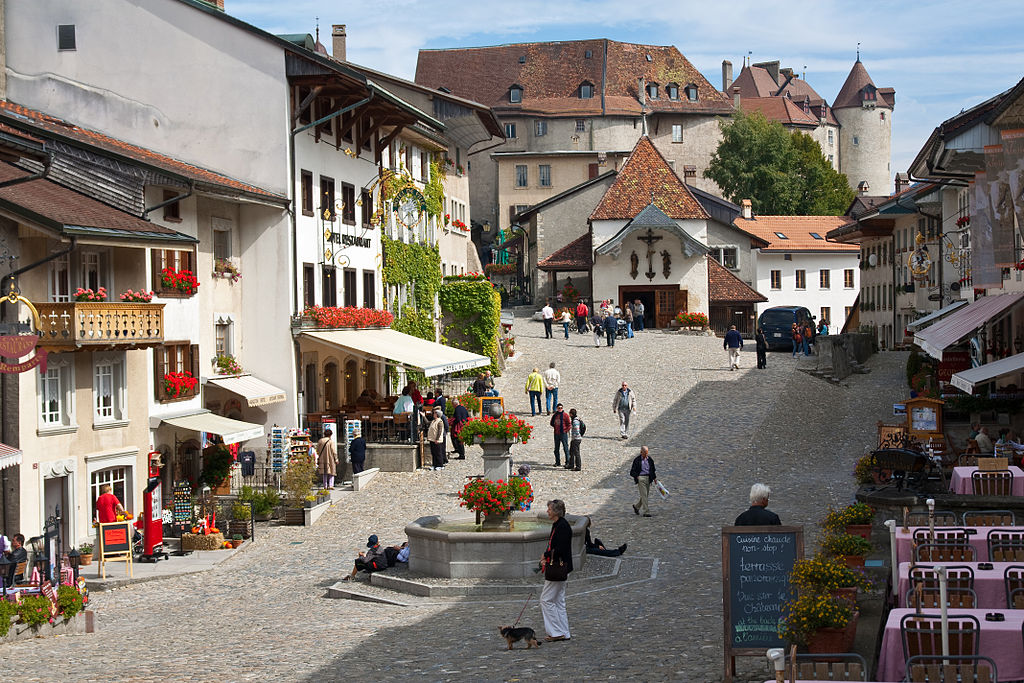 Appenzell is the capital of one of the most traditional cantons in Switzerland, where an open vote of residents is still held once a year in the central square. Appenzell will immerse you in the atmosphere of authentic Switzerland, a land of shepherds and farmers. And the brightly colored houses of Appenzell cheer you up, especially after a glass of local Appenzell beer in one of the restaurants! 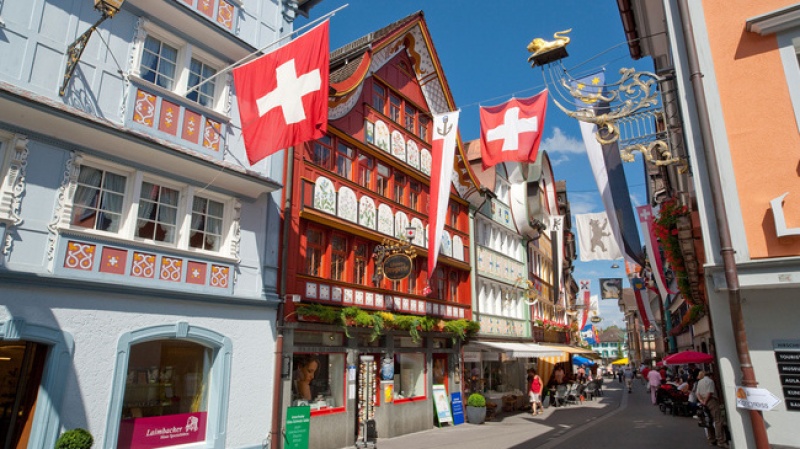 Zermatt is a terribly touristy place! The city consists only of hotels, and the crowds of tourists never disappear. But despite this, here you can see very characteristic houses, traditional for this area, built on stilts and poles of stones. And numerous Alpine chalets – what is not a house here, it’s all in the style of the chalets! 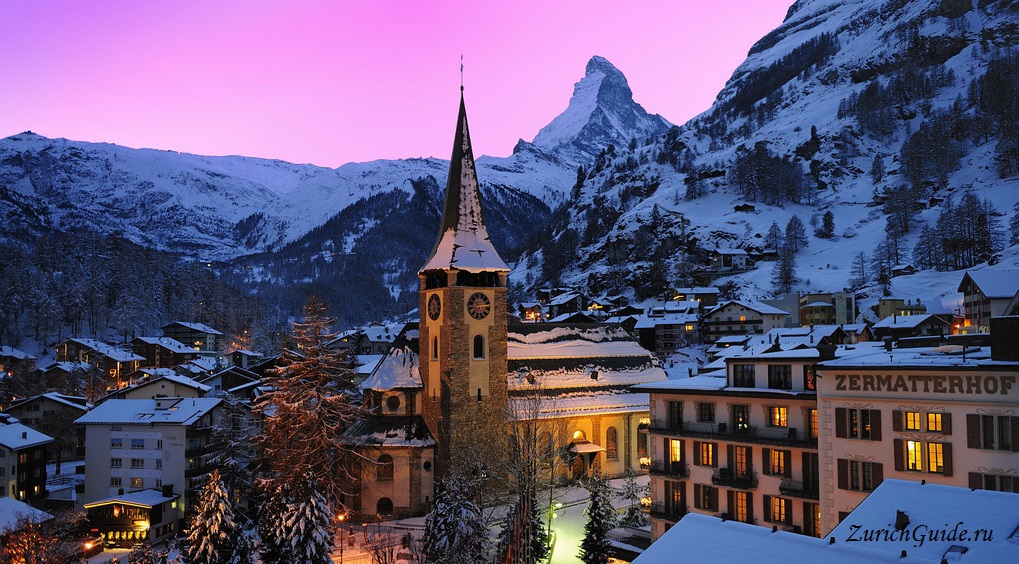 Fribourg is a big bilingual city, and the language border runs right in the middle of the city, along the river! Architecturally, Fribourg is quite beautiful: a stone old town steeply descending to the river, high bridges and beautiful views of the steep riverbanks. 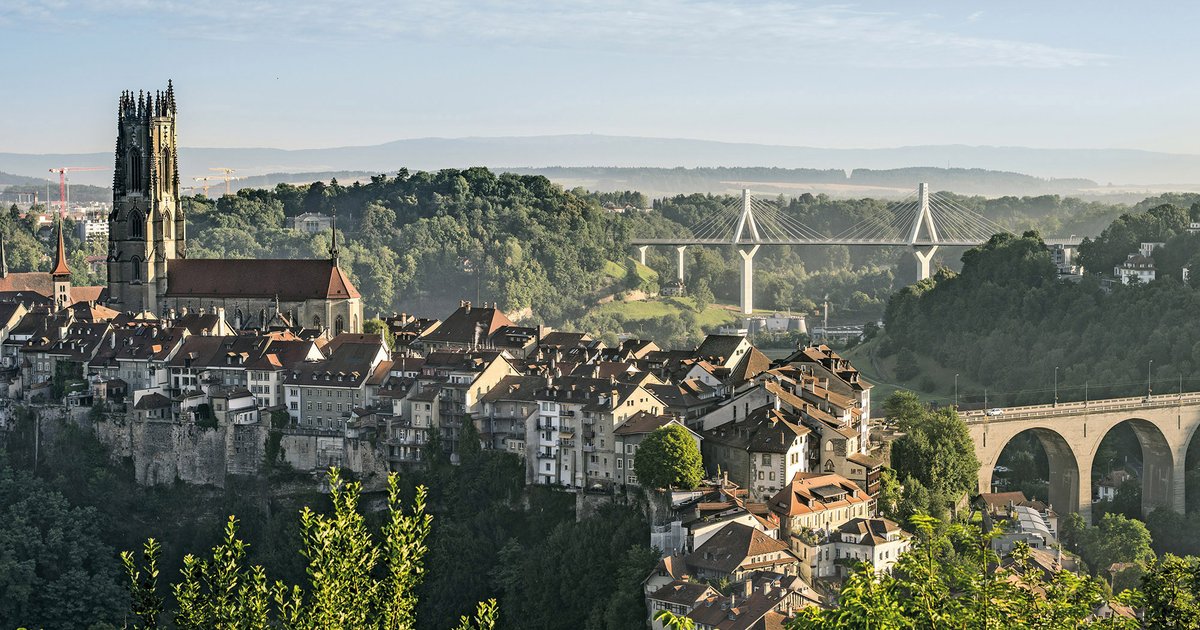 Schaffhausen is the capital of the canton of the same name, located north of Zurich, on the border with Germany. And although the city is inferior in terms of the beauty of the houses located not so far away Stein am Rhein, it nevertheless has its own pair of beautifully painted buildings, and above the entire city towers a distinctive fortress – Fort Munot. In addition, just a half-hour walk from Schaffhausen, you can see the famous Rhine Falls.