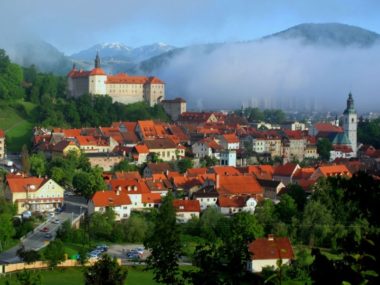 In the very beginning of Slovenia’s Gorenjska region, just 25 kilometres north of Ljubljana, lies the medieval town of Škofja Loka. It is nestled in the foothills of the Alps between two mountain rivers: Selska Sora and Polanska Sora. Škofja Loka is justly considered the best preserved medieval town in Slovenia. Walking through the local streets and squares you are transported back to the 16th century when the main buildings were built. But the history of Škofja Loki begins long before… 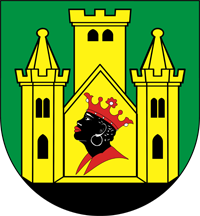 THE HISTORY OF SHKOFYA LOKI

More than a thousand years ago, more precisely in 973, the German king and Holy Roman Emperor Otto II granted the land in the mountains of Locke to the Freising bishop Abraham. Thus the settlement, originally called Lonca or Stara Loka and later renamed Shkofju Loka (from the Slovenian word škof – bishop), was founded on this place.

The settlement was located at a strategically important crossroads, so in a short time a castle was built here, which became the main residence of the bishops of Freising. For 830 years Škofja Loka was the center of their domain, which certainly left its mark on the town’s architecture.

The center of the town

The settlement gradually expanded, occupying more and more land around the confluence of the two rivers. In the 12th century another Holy Roman Emperor grants the bishops the right to mint their own coins and collect tolls.

In the middle of the 13th century Škofja Loka already had its own court, and in 1274 it received the official status of a city. At the beginning of the 14th century the city was also surrounded by a strong fortress wall. Historical documents say that the wall surrounding Shkofia Loka had five defensive towers and five city gates.

A part of this fortification wall has survived to this day and today adjoins the surrounding buildings. 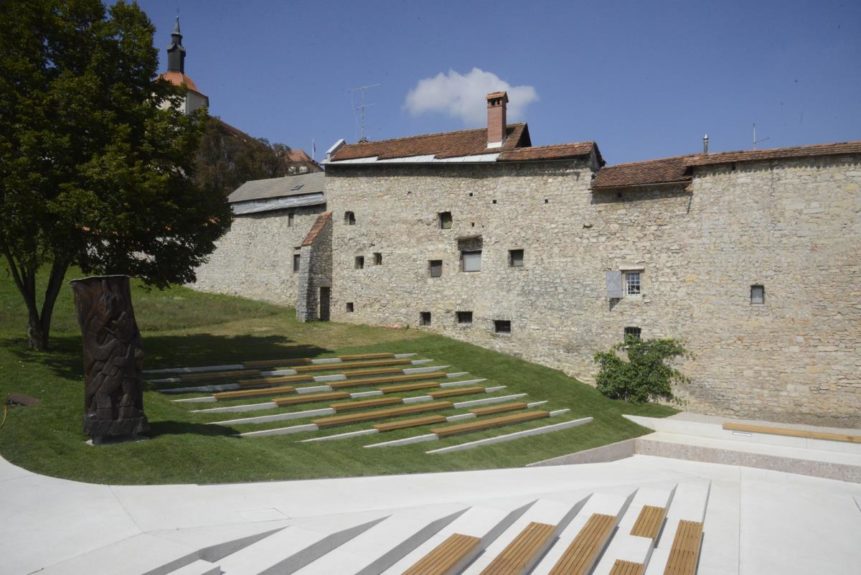 Old Wall of the City

Škofja Loka grew and developed until in the second half of the 15th century when the town began a “black” period that lasted for several decades. First, in 1457 the commander of the Celje army Jan Vitovets, who rebelled against Frederick III in his fight for the right of succession to the county of Celje, actually burns down Shkofia Loka.

In 1476 the town is attacked by the Turks. The plague and numerous fires that followed, along with the Turks, ruthlessly destroyed the town’s population and their homes. At the turn of the XV-XVI centuries in Shkofya Locke peasant riots take place and on top of that, a strong earthquake in 1511 destroys most of the city’s buildings. But all bad things come to an end at some point. Thanks to the efforts of another bishop, Philip Freising, Shkofya Loka is rebuilt after the earthquake, and the town gradually grows with new, now stone buildings. Most of these buildings have survived to this day, making Škofju Loku the best surviving medieval town in Slovenia. Although fires raged in 1660 and 1698, causing great damage to the town, the buildings were rebuilt and Loka returned to peaceful life. Along the banks of the river, the numerous water mills, which had been the main source of income in the past, are being rebuilt; the cloth and iron trade is flourishing; blacksmiths, shoemakers, tailors and bakeries are operating.

Soon, due to the ceased Turkish raids, there is no need for defensive walls: they are demolished in 1789, along with the towers and city gates.

THE SHOFIA LOCA AS PART OF THE DUCHY OF KRAJNA

In 1803 the independent bishopric of Freising, and consequently Škofja Loka, became a part of the Duchy of Krājna (a large part of present day Slovenia). At this time, Krajna, a hereditary land of the Habsburg monarchy, is not yet part of the Austrian Empire, being an independent duchy.

It is in Škofja Loka that the first street lighting in the territory of present-day Slovenia was inaugurated on August 6, 1894. Already at the beginning of World War II, Škofja Loka was occupied by Italian troops, who were soon replaced by the Germans. The first inhabitants of the town were arrested by the Gestapo as early as May 6, 1941 and a great many more suffered under the Nazis during the following war years.

Despite the active partisan movement in the Gorenj region throughout the war, Škofia Loka was liberated from the German invaders only on May 9, 1945.

For the first time after the end of the war, Škofji Loki Castle is used as a prison for German prisoners of war. WHAT TO SEE IN SHKOFJA LOKA

Škofja Loka is a small town, and all of its historical and architectural attractions are concentrated in the old center on two, well-preserved medieval squares – the Town (Mestni Trg) and the Lower (Spodnji Trg).

The town square was once home to wealthy citizens who could afford to build a stone house. The lower square was mainly occupied by wooden buildings where artisans and apprentices lived. Naturally, it was it that suffered most from the city’s many fires.

THE CASTLE OF LOCA

In the earthquake of 1511 the Loka Castle as well as many other buildings was almost completely destroyed and it was rebuilt in its present form by Bishop Philip.

Since 1959, the Loka Castle houses the City Museum, which is considered to be one of the best museums of Slovenia. You can get into the city center by crossing the Capuchin Bridge – one of the oldest historical monuments of the city. The bridge was built by Bishop Leopold in the middle of the 14th century. According to legend, the bridge ruined its creator: crossing it once on horseback, the bishop fell from his horse into the water and drowned.

In 1888 the Capuchin Bridge was renovated and equipped with new metal railings, and in its center there is a statue of the Catholic Saint John of Nepomuk. READ
The 5 best things to do in Lund, Sweden

And if you walk across the bridge, coming from the city center, right behind it you can see the church and monastery of the Capuchin order. 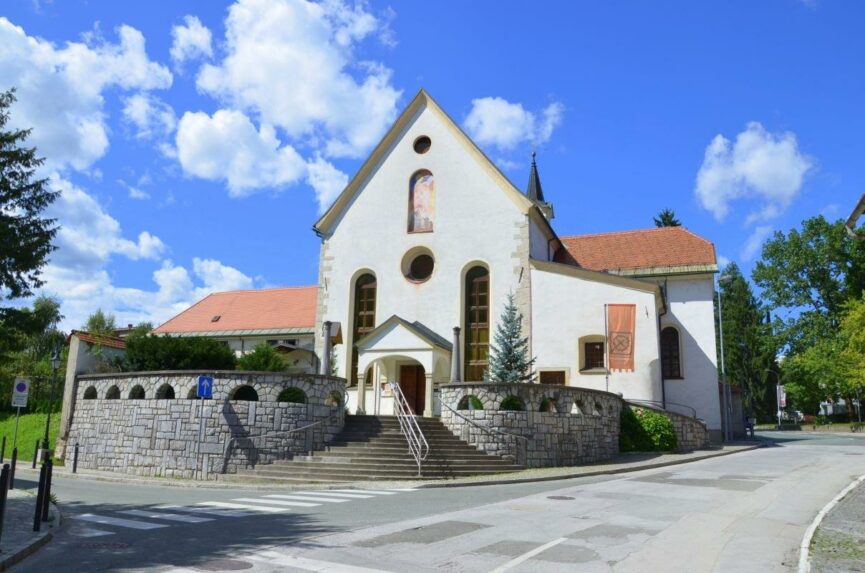 The church is unique in that it was built in 1709, strictly according to the canons of the Order. Its library contains more than 30,000 religious books, among them the first Bible translated into Slovenian by Jurij Dalmatin in 1584. The first Bible in the Slovene language

The Church of the Annunciation is a masterpiece of architecture, situated 4 km from the town itself. It has preserved many paintings, belonging to different centuries. There are several fragments of the Passion of the Lord of the XIV century, and beautiful examples of the XV century, and Gothic frescoes. The golden high altar is one of the richest altars in Slovenia, made by carver Juri Skarnos in 1652.

In addition to the main altar, there are six smaller altars in the church, among which the very beautiful St. Martin altar, made in 1680 and located in the northern part of the church should be noted.

The building of the town school for boys was built in Schkofier Locke in 1627. On the facade of the school is a stone plaque with the coat of arms of the town and the name of the founder of the school – Mihaela Paplerja. The locals wanted to have educated sons to inherit their professions. But only the wealthy townspeople could afford a private teacher. Therefore, people got together so that it would be cheaper to pay for lessons. That’s how this school came to be. The old school in Schkofjer Locke

A very interesting town building is the old barn, rebuilt after the earthquake of 1511. The building was part of the old city’s embankment walls and was used to store the “in-kind” taxes collected by landowners of the time.

Nowadays it houses a bank branch and a permanent exhibition of the famous Slovenian artist Franz Michelić. 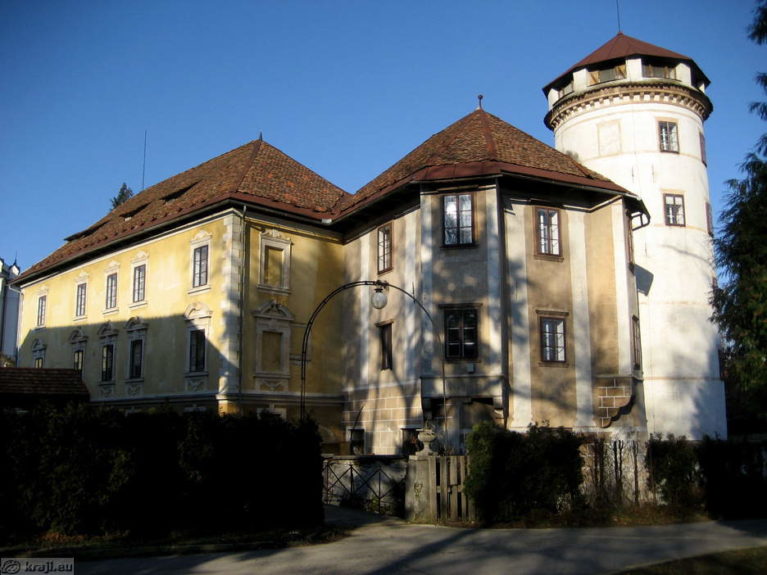 Over the centuries, these examples of the city’s culture and history have been carefully preserved.

In 1987 the town of Škofja Loka was declared a cultural heritage site.

DO YOU WANT TO EXPLORE EVERYTHING YOURSELF?

Shkofia Loka is home to the only detective guide in the world, Natalia, who has combined her experience as a homicide detective with the activities of a guide and created unique quests – investigations based on the history of this town. You will feel like real detectives, solving the medieval murder of Bishop Conrad or in pursuit of an evil witch can taste all the beauty of Shkofia Loki. Amazing adventures await you! Call and write: +38631017830, [email protected]