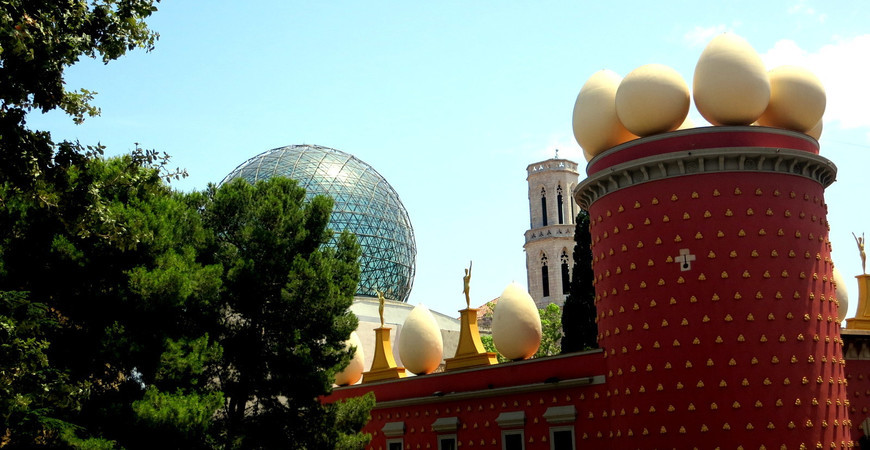 The Salvador Dali Theatre and Museum in Figueres is one of the most famous museums entirely dedicated to the life and work of the famous artist Salvador Dali. The museum is considered to be the last great work of Salvador Dali: everything in it was conceived and designed by the artist himself.

The museum is the second most popular tourist attraction in Spain, second only to the Museo del Prado in Madrid.

The official opening of the museum took place on October 28th, 1974.

History of the Museum

The museum project began in the early 1960s, when the mayor of Figueres, where Dali was born, asked the artist to donate one of his paintings to the city, but Dali decided to donate not just one work, but to create a whole museum.

The Dali Museum Theater was built on the site of the former Municipal Theater of Figueres, built in 1849. The municipal theater building was in a ruined state as a result of a fire at the end of the Spanish Civil War: the ceiling of the orchestra pit had collapsed, and the anteroom and lounge were the only parts that remained more or less intact. The artist planned to use the charm of the ruins of the former theater to house his future museum.

Since the 1970s, Dali devoted his full attention to this museum project, taking part in it and constructing its minute details until it became a reality in 1974.

One of the most notable features of the museum is the transparent dome that crowns the building: it was designed by the Murcia architect Emilio Perez Pinero. This dome has now become the emblem of the Teatro Museo and an icon of the city of Figueres.

Externally, the museum has retained the neoclassical appearance of the theater, but decorated with several masculine sculptures.

READ
Lake Orta, Italy: how to reach, what to see and where to eat

The collection of the Gala Salvador Dali Foundation contains all kinds of works of art by the great artist: paintings, drawings, sculptures, prints, installations, holograms, stereoscopes, photography, etc. Of these, about 1,500 are on display at the Teatro Museo Dali in Figueres.

Each room in the museum is an example of high art with bold compositions of paintings, sculptures, furniture, decorations and other amazing things. In many rooms, the walls and ceilings are completely covered with large wall paintings: some of them are original compositions made especially for this museum, others are enlarged copies of its famous paintings.

Under the main floor of the building is the crypt where Salvador Dali’s tomb is kept. Despite the artist’s last will – to find rest in Chateau Pubol – he was buried in the Teatro-Museum two days after his death, on 25 January 1989.

The opening hours of the Theater-Museum depend on the season:

Buy tickets for the Salvador Dali Museum directly on site in the museum ticket offices, online at the official museum site, or through the form below.

Excursions to the Dali Theatre Museum

How to get to Dali Theatre Museum from Barcelona

On your own, you can get to the Teatro Dali Museum either by car or by public transportation, such as trains or buses.

It takes 1-1,5 hours by car from Barcelona along the AP-7 Barcelona-La Junquera road to the Figueres exit. The locations of the parking lots near the museum are available on google maps.

By train you can get from Barcelona from Sants station to Figueres in 2 hours. The train from Girona will take 15 minutes. The Dali Theatre and Museum is a 12-minute walk from Figares train station.

There is a bus 602 from Barcelona airport via Girona. The travel time is 2 hours. The bus timetable is available here.

To order a cab, you can use the Non stop service recommended on the museum website.