For visitors to Madrid who are not indifferent to sports, a tour of the Santiago Bernabeu Stadium will be one of the most memorable. The stadium is the home ground of Real Madrid, and during matches a lot of excitement rages there.

A short tour gives you a chance to go behind the scenes and see for yourself places that are usually off limits.

Before you visit, it’s a good idea to read some useful information and find out how to buy tickets and what the tour program is all about.

A brief visit to the Museo de Santiago Bernabéu in Madrid

Tip 1: If you want to avoid queues for tickets to the Santiago Bernabeu at the ticket offices, order your tickets without queuing online. Make your journey easier!

Tip 2. With special offers, you’ll have everything you need to travel around the city in one purchase:

Soccer fans are wondering why the place is so named. One of the best stadiums in the world was named after Santiago Bernabéu – the famous Spanish player, coach and president of Real Madrid.

The history of the titled soccer club began in 1902, when nothing foretold a great success.

The stadium was built a little later, in 1947. Nowadays, its arena hosts spectacular games against the main rival FC Barcelona, the second most important team of Madrid – Atletico Madrid, various Spanish clubs and foreign opponents.

The capacity of the stadium is 81,044 people, and still it does not get all comers.

But a tour of the Santiago Bernabeu is available to any tourist.

It is held every day except the day of the match and the day following it. With the exception of some holidays.

The tour begins with an overview of the panoramic views of the stadium. Panoramic elevators take tourists to the top point.

After strolling through the stands, it is worth checking out the VIP box, which is occupied by politicians, famous artists and other celebrities during matches.

Then everyone goes to the guest locker rooms. The rooms where the athletes change clothes are closed because their belongings are stored there. 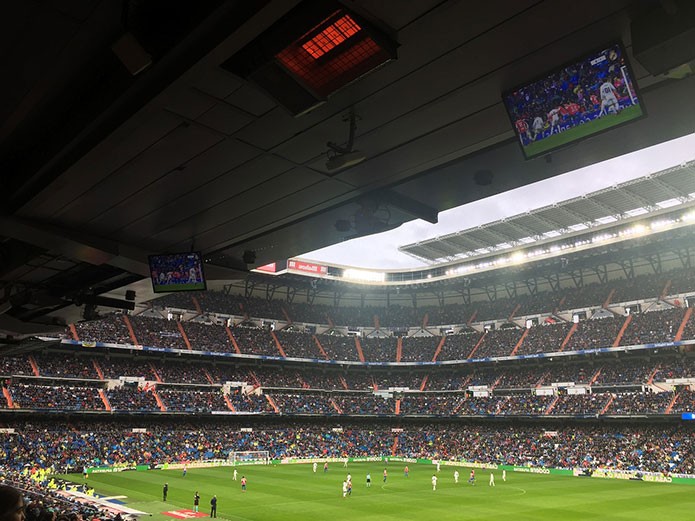 The playing field and view of the stadium: a walk on the soccer field

From the changing rooms visitors get to the soccer field. The size is 160×70 meters, which is certainly impressive.

It is worth taking a photo here: the pictures against the backdrop of the stadium turn out fantastic. 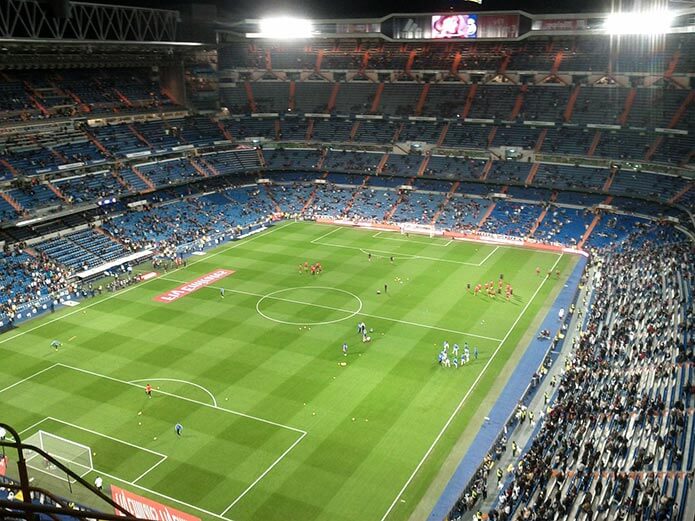 The collection of cups won by Real Madrid is amazing. You will see these awards in a special trophy room.

Here you will find the uniforms and shoes in which the most famous players of the club played, see legendary photos, and several screens broadcast the best game moments in the history of soccer. 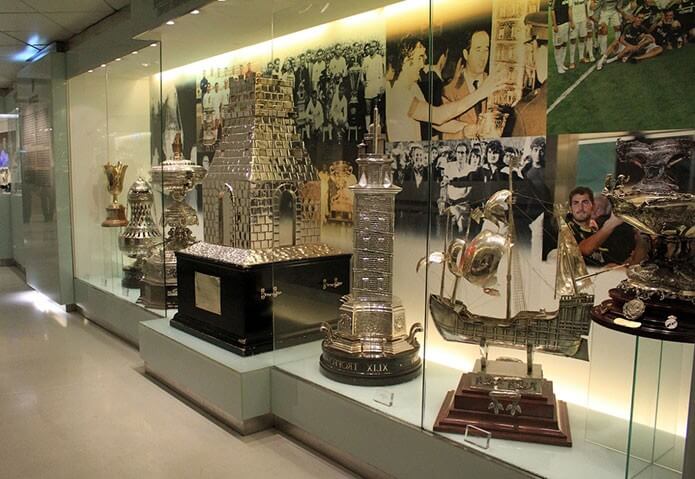 The box where the club president sits in the center stand. Here the cups and other awards are presented at the end of the decisive game.

A visit to the tunnel through which the athletes walk to the match leaves a lot of impressions.

Nearby you will see the technical area for the coaches, benches and seats for the main roster players.

The checkroom at the Santiago Bernabeu is considered one of the most modern in the world of sports.

Many fans are in awe of this space and try to have their photo taken there. 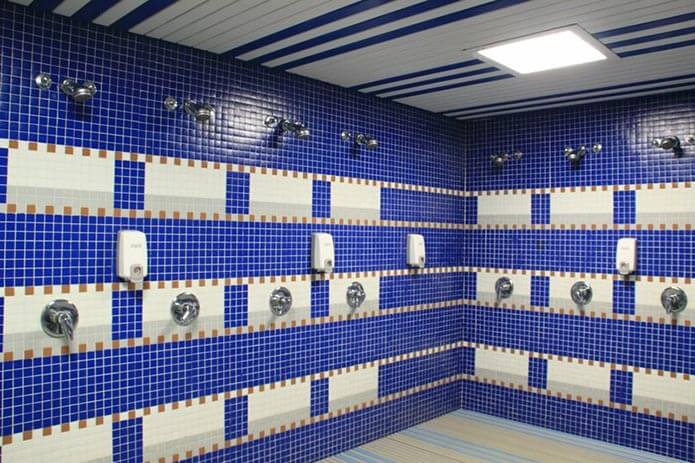 A tour of the stadium would not be complete without a visit to the press center.

There, the players, coaches and managers comment on the matches in front of hundreds of domestic and international journalists.

You will experience such emotions during the walk that your appetite will surely take over.

Then it’s time to go to the restaurant which offers perfectly cooked tuna, tapas and delicious cocktails.

For memorabilia, stop by the two-story store open at the stadium.

Buy your jerseys, balls, cleats, linens and pretty knickknacks with the Real logo.

There are even items for babies, such as diapers with the logo. 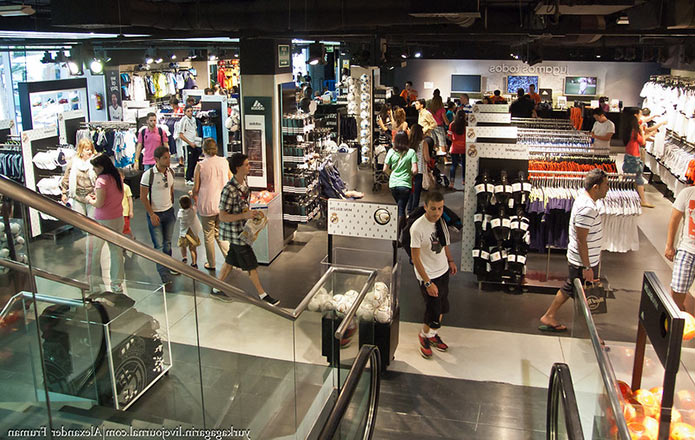 The Real Madrid museum is a great chance to learn about its most high-profile achievements. It is the heart of the stadium, which occupies an entire tier and includes hundreds of exhibits.

There are also relics dedicated to the basketball team. It’s not as widely known, but it’s won quite a few awards, too. 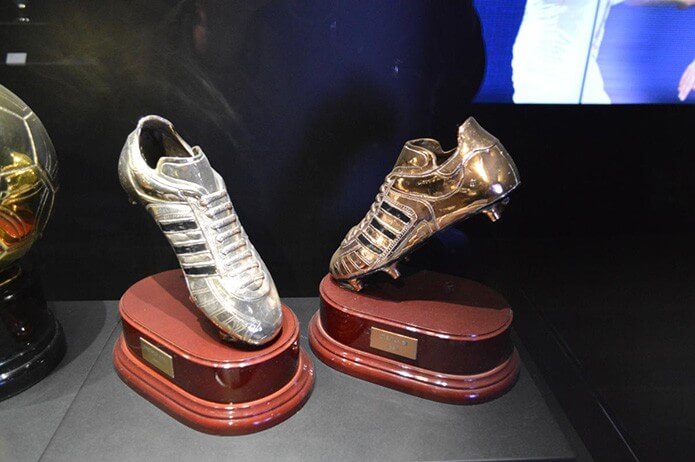 Cost of the tour and how to buy a ticket online

The price of a stadium tour is quite reasonable:

Entrance is paid at the ticket office № 10.

Tickets look unusual: each ticket has a picture of one of the players in the main team.

Since there are enough people wishing to visit the Santiago Bernabeu even during the off-season, there are always lines at the ticket office.

You’ll receive your completed tickets by email within a day.

The stadium is 4.5 km from the central part of the Spanish capital.

There are several ways to get there:

Parking near the stadium

Visitors to Madrid travelling by car will make use of parking lots. The nearest parking lots are 450-500 meters away. To be guaranteed a parking space, book in advance online.

During the 45-minute stadium tour, visit the observation deck with a good view, the VIP stand and VIP lounge, the press center, the players’ locker rooms, and learn about the history of the club in the Atletico Club Museum.

READ
The most dangerous seas

The cost of an adult ticket is 24 euros, a children’s ticket costs 12 euros.

Even if you are not a fan of soccer, do not miss the chance to take a tour of the Santiago Bernabeu.

The stadium, built with a royal scale, is really worth a visit, and it is impossible to forget the feeling of the trip. It is no coincidence that many tourists who have been behind the scenes become interested in the sport. 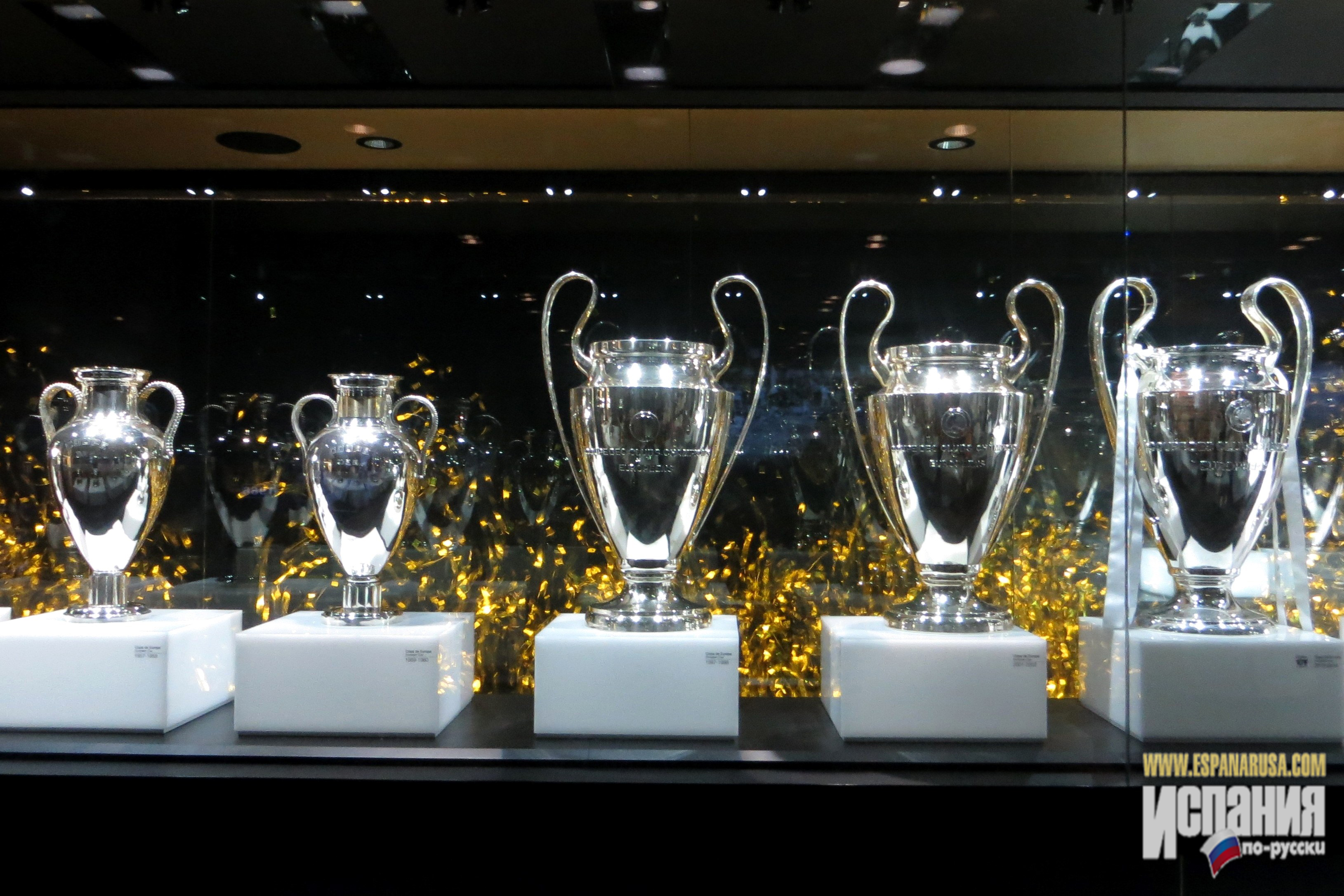 If you are a soccer fan, and especially if your favorite team is Real Madrid, you should visit the Santiago Bernabeu Stadium, the Mecca of soccer, and the home of Spain’s oldest soccer club.

“Real Madrid offers its fans the opportunity not only to visit the stadium, which amazes with its scale and thoughtful architecture, but also to get inside the holy of holies, to see the showers, locker rooms, and rest areas of the favorite team. And, of course, to visit the heart of the Santiago Bernabéu, the Real Madrid Royal Club Museum. 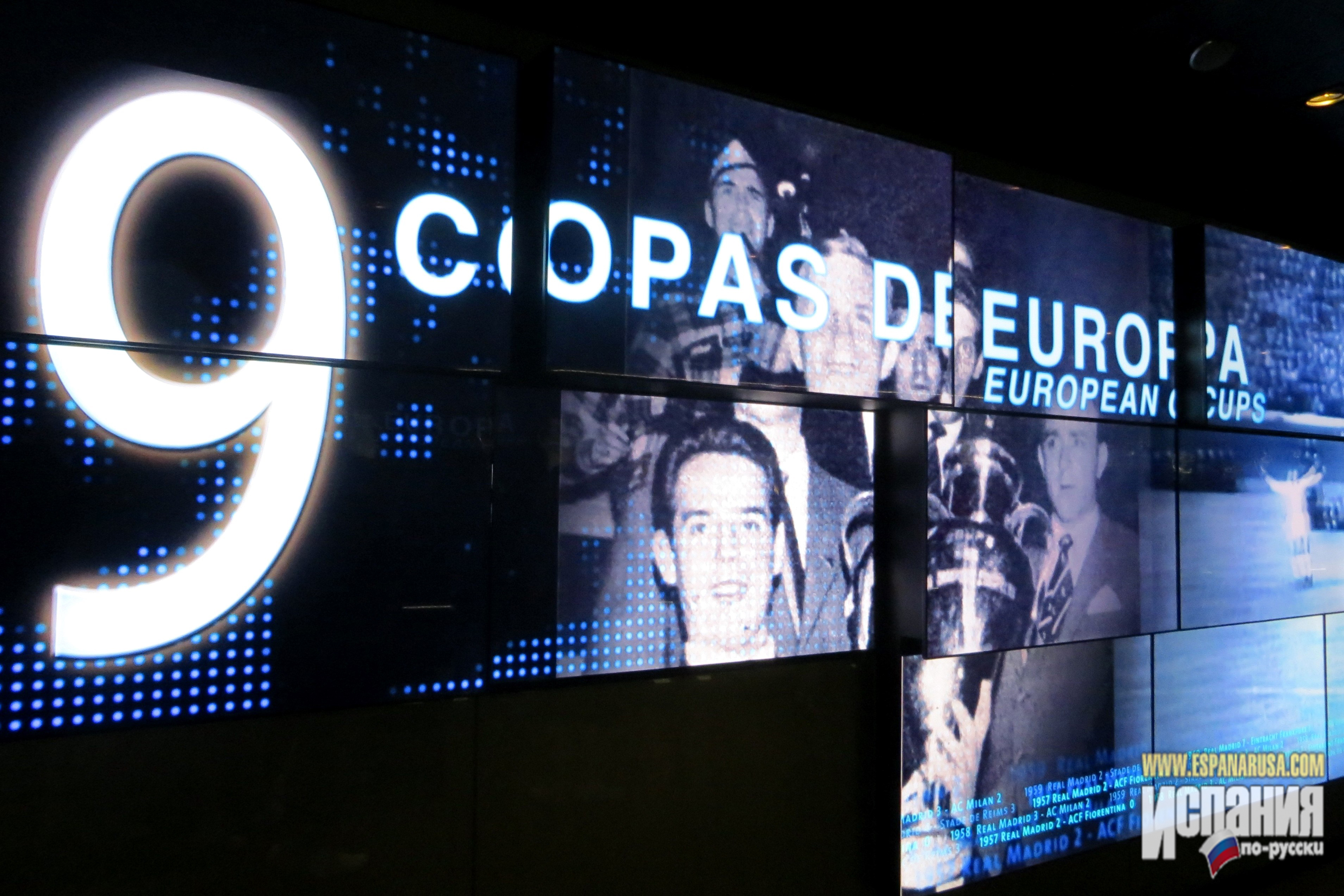 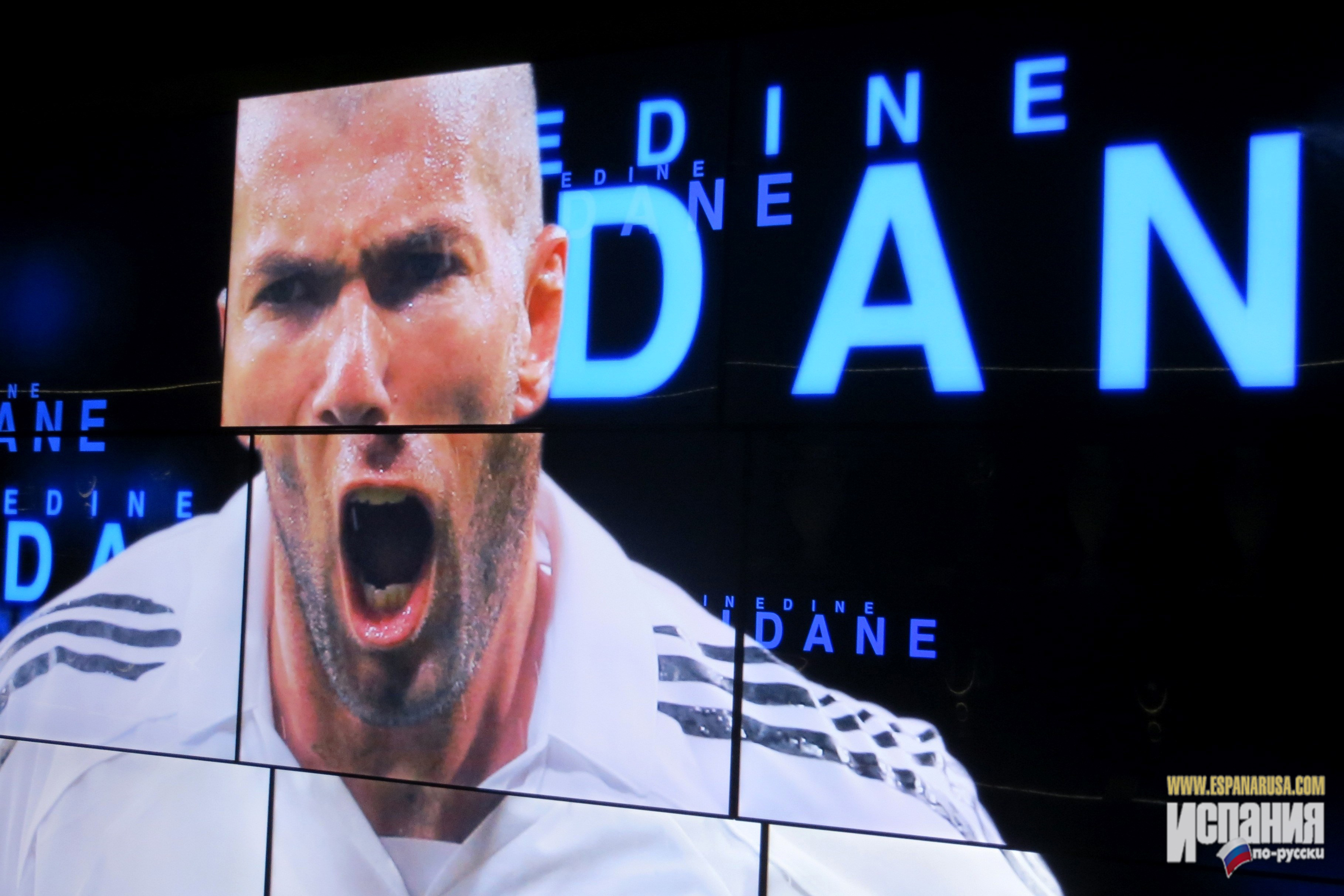 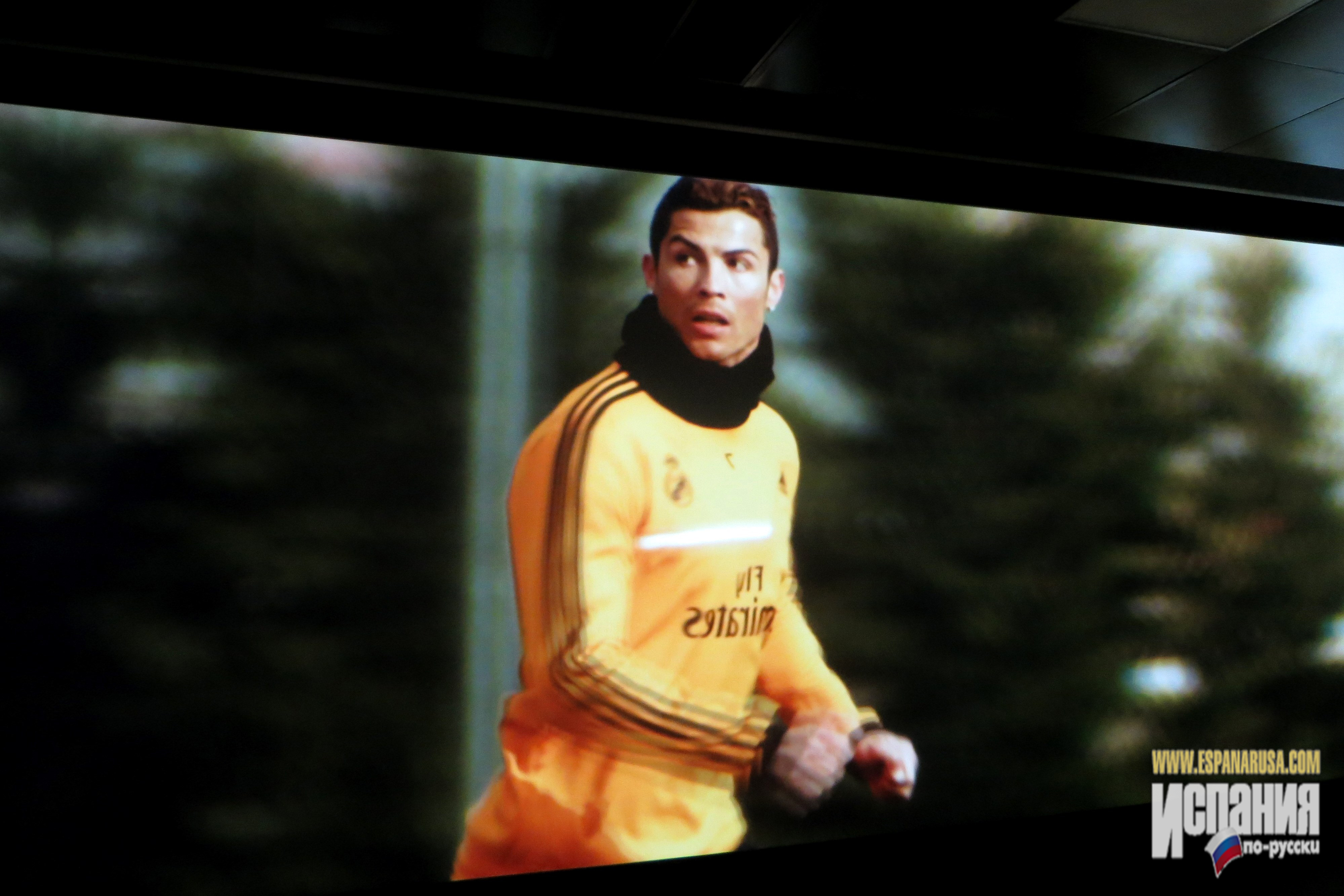 The museum in Madrid occupies an entire internal tier of the stadium, a enfilade of halls and corridors, slowly moving along which you can learn the history and achievements of the club for all time of its existence. The whole world knows almost everything about the Real Madrid club, or rather, everyone thinks they know everything about it. But this is not true. When you visit the museum, you will see hundreds of exhibits that tell the many events and secrets that have taken place in the 114 years of the glorious history of the ever young club.

The museum is equipped with the most modern means of transmitting audio-visual information: there are interactive boards, which give you maximum information about every player who has ever played for Real Madrid, and video panels on the walls, showing the most memorable moments of matches, and even an acoustic room, where you can listen to the “sounds of Real Madrid” – playback recordings of numerous cries and shouts of fans of the club in different years.

READ
Marsa Alam, Egypt. Where is it, when to go and what to see 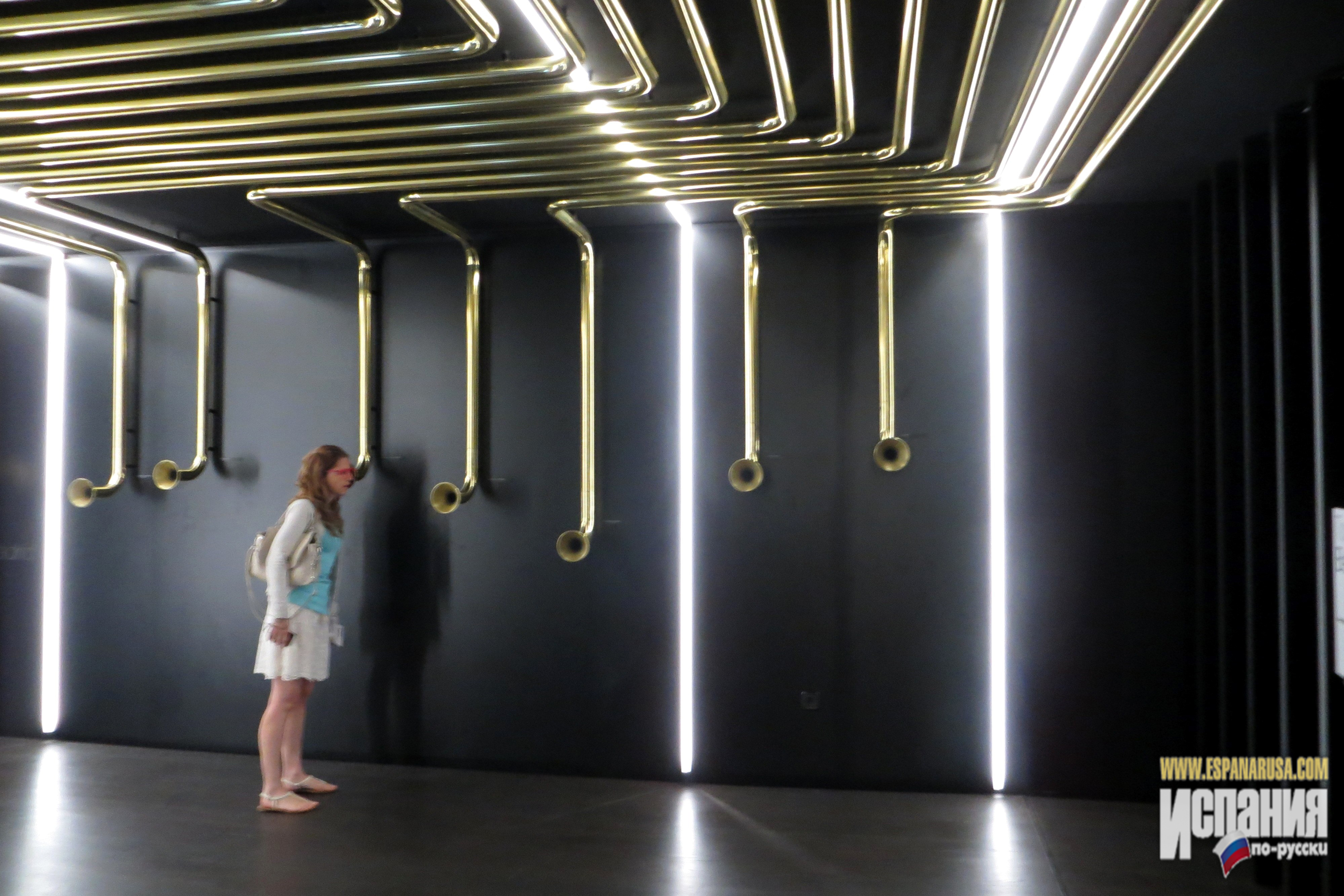 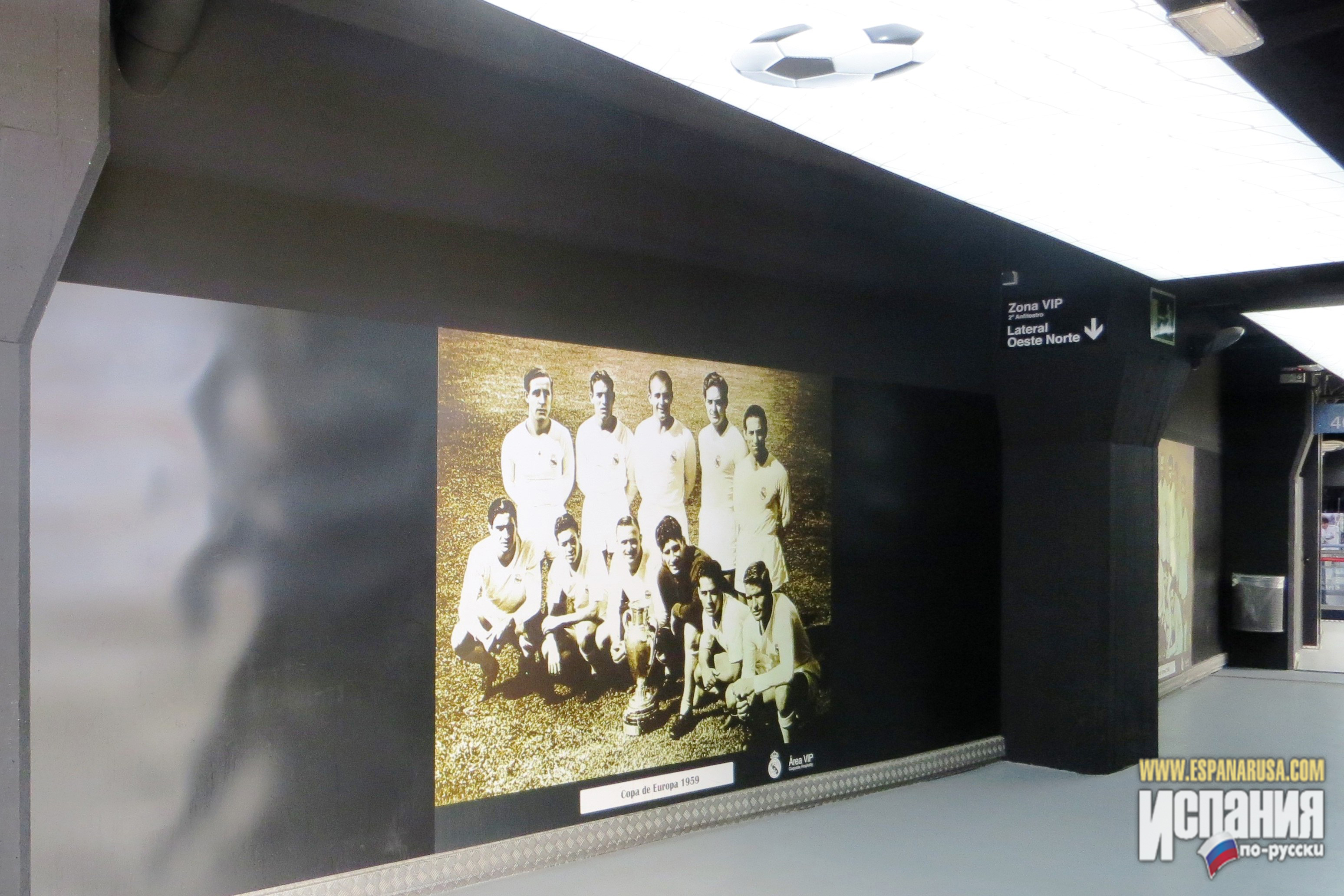 The famous Hall of Trophies of Real keeps absolutely all the awards ever won by the players of the club. Their number just amazes the imagination. Here you can see all the golden boots and golden balls, and learn the history of their owners. Among the museum treasures are the boots of legendary striker Alfredo Di Stefano, the gloves of goalkeeper Iker Casillas, as well as numerous golden boots and trophies of Raul.

Mankind could not exist without Real Madrid, as well as soccer would have hardly reached such high marks of popularity without the existence of this club, the owner of as many as 74 trophies around the world. The piggyback of the club – 31 winning games in the Spanish championship, 9 European championship cups and 3 intercontinental cups. In 2000 the club won the FIFA Grand Cup, “The best club of the XX century,” and in 2002 won the European Super Cup.

All the awards are placed in a row, and the best moments of the European championships, in which Real Madrid won, are continuously shown on the television screens on the walls. 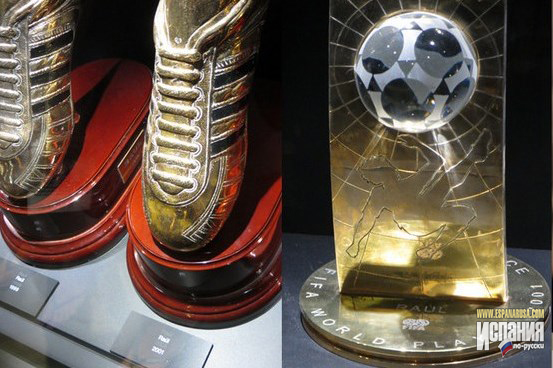 In addition to the Hall of Trophies and the Club Hall of Fame, there is a room dedicated to the current squad of players, where you can get acquainted with the current team of the Blancos. Here you can see their uniforms – boots, shorts, jerseys, decorated with names and numbers.

In light of the information received earlier about the history of the club, this room looks very symbolic. Visitors feel as if they are getting acquainted with a living legend, with the embodiment of the very spirit of the Real Madrid club. Looking at the uniforms of current players, it is remembered that “Real” was the first Spanish team to perform with numbers on their shirts, that the tradition of rewarding players for winning with money was born in this club… And that these people are known, loved and adored by the whole world!

READ
The best places to get naked

Huge plasma panels on the walls show each of the players in the current roster in full face, profile and height. They impress with the perfection of their physical characteristics, which makes fans stay in this part of the museum for a long time. 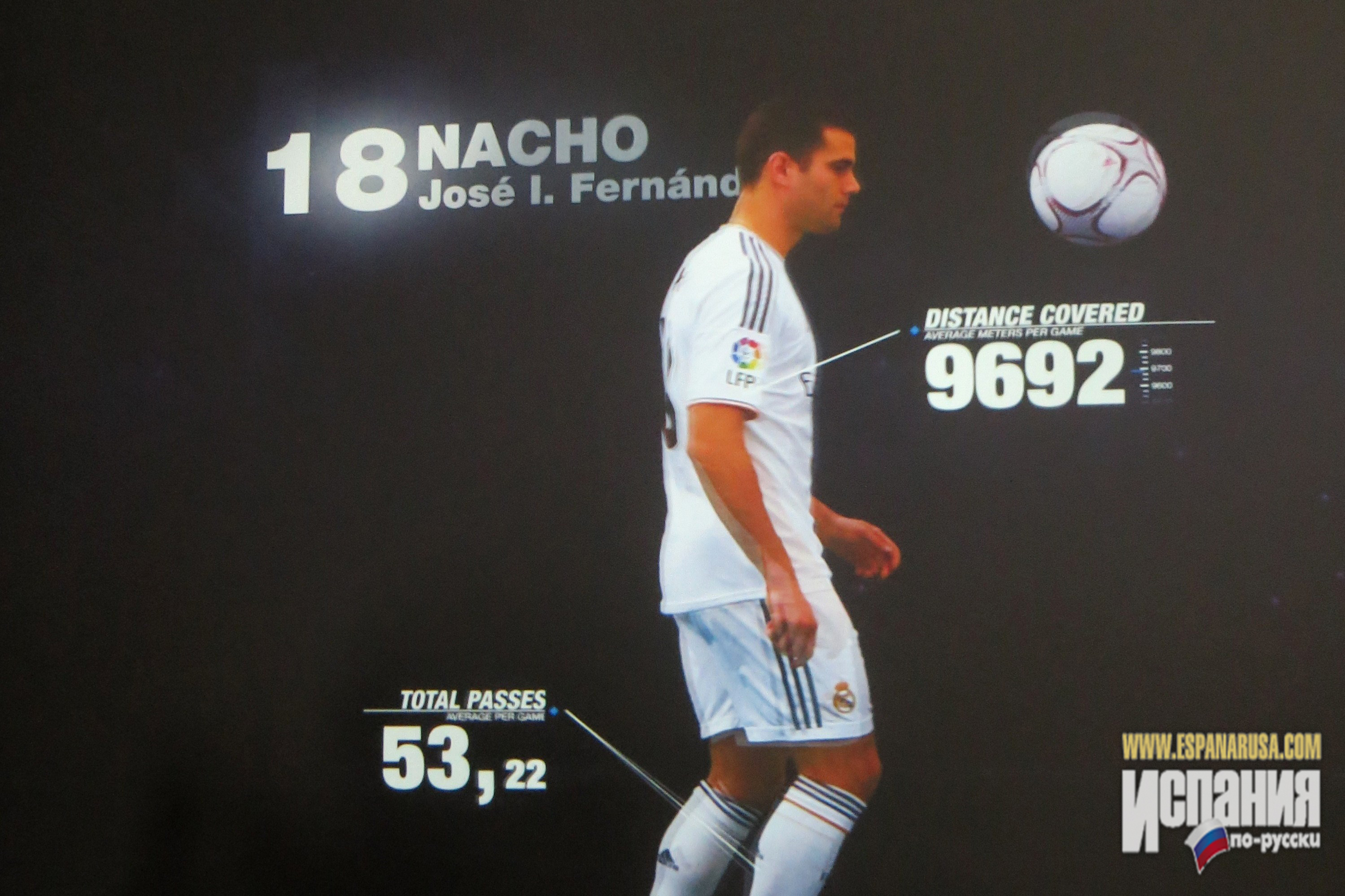 And of course, what would a Spanish museum be without a screening room? In the museum of Real Madrid club you can see on the big screen, how your favorite team is training, how the training matches are held, how the shots are practiced, and what inspires virtuoso “blancos”. Movies and commercials are shown in two languages – Spanish and English, and, what is also important, in the cinema hall you can stay as long as you want, to fully enjoy the spirit of the “living legend.

After visiting the museum, even if you are not a fan of the Real Madrid club, you will become one. And for sure you will already look differently at the interior, locker rooms, showers, and players’ rest rooms, which you will have to go through after leaving the museum. Be sure to take a photo next to your favorite player’s locker, a photo that will take its rightful place in your collection, as well as a photo with a stylized Real Madrid cup, which you will be asked to take on the way out.

A visit to the Real Madrid club museum is part of the tour of the Santiago Bernabeu Stadium. The current cost of admission tickets is 19 euros for adults, 13 euros for children under 14 years. Ticket sales: ticket office 10, next to door #7 (Paseo de la Castellana, on the Torre B side). Start of the tour: door no. 20 (Avda. Concha Espina).

Service Center for life and business “Spain the Russian way” is your guide in the world of individual tourism. Organization of tours, routs, trips, tickets for various events, excursions with the best guides, holiday arrangements. Services for discerning customers.