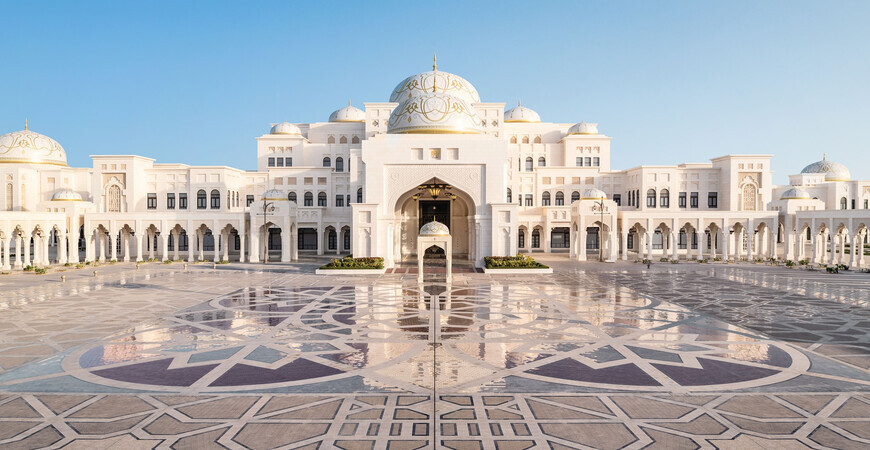 The Presidential Palace in Abu Dhabi is the epitome of grandeur and historical heritage of the United Arab Emirates.

On March 11, 2019, the landmark opened its gilded doors to ordinary visitors. Sheikhs and rulers of the state Mohammed bin Zayed Al Nahyan and Mohammed bin Rashid Al Maktoum attended the opening ceremony. And in August of the same year, Qasr Al Watan (another name of the building, which translates as the Palace of Nations) was included in the list of 20 best attractions of art and culture of the world according to the tourist website Hotel and Rest.

The recognition wasn’t hindered by the palace’s young age – the structure was completed in 2017. Praise for the man-made monument is also left by visitors. Almost all tourists remain impressed by what they have seen and advise this place to be a must-visit.

Tickets to the Royal Palace in Abu Dhabi

Tickets are purchased either online on the official website of the iconic site, or directly on site. If purchased online, the document will be sent by email. It is not necessary to print it out – just download it to your phone.

The cost for an adult is AED 60, for children from 4 to 16 years – AED 30, children under the age of 4 go free of charge. Tickets include admission to all the exhibitions of the palace, the library, the garden surrounding the building and the light show Palace in Motion.

Keep in mind that before you visit the palace, you will need to pass a security check. It is better not to take unnecessary things, and even more bulky bags, as problems may arise. As for cell phones, photo and video, it is not prohibited, but only for noncommercial use. The exception is tripods and wearable devices.

The tour and what to see at Qasr Al Watan

The tour is not included in the ticket price. It is not at all necessary to take an organized tour but if you want you can arrange it on the territory of the palace. The tour lasts 90 minutes and takes place every half hour for groups up to 30 people. Conducted in English and Arabic. A short bus transfer from the visitor center to the palace is available for all guests.

Before contemplating the interior, pay attention to the exterior. The majestic facade of the building is made of white granite and limestone. The color scheme is also not random and has its own characteristics. Thus, the blue symbolizes the waters of the Persian Gulf, yellow symbolizes the Arabian sands and white symbolizes peace and purity. This color palette decorates the palace’s interior walls. They are echoed by 5,000 geometric patterns.

The artistry and heritage of the region is fully expressed in the Great Hall. Here you will see vaulted aisles, ornaments and patterns, and mirrored cubes placed in every corner. But the most important dominant feature of the room is the central dome, which rises 60 meters above the ground and has a diameter of 37 meters. It is considered one of the largest in the world.

It is a showcase of cultural exchange and international diplomacy between the UAE and other countries. Here you can see what is given to the Arabian Sheikh. Among the most valuable exhibits is the moon-shaped jug presented to the head of the Emirates during his visit to South Korea in 2012. The object is interesting because it reflects a deep connection with nature, and its simplistic design contrasts with other gifts.

Also on display in this collection are photographs, an Arabic dagger, a sword and shield from Kazakhstan, carpets from Turkmenistan, samurai armor and a Swiss quartz rock estimated to be 20 million years old.

This is the name of another room that is used for official purposes, such as meetings of the Cabinet of Ministers, the Federal Supreme Council, the Arab League, the Gulf Cooperation Council and similar events. The round shape of the room symbolizes equality and the huge 350,000 crystal three-tiered lamp creates the necessary light and absorbs unnecessary sounds.

Business meetings often end with banquets. An idea of Emirati hospitality is made possible by the banquet hall. Seating a total of 300 people, all tables are set with 149,000 bone china cutlery.

This is where professional photographers guard visitors to take their pictures. Photos can be picked up in the gift store after the screening is over.

A craving for knowledge is never superfluous, especially if it’s a unique opportunity to view valuable Arabic manuscripts. The artifacts shed light on the region’s most notable contributions to astronomy, science, art, literature and many other fields.

The Birmingham Quran is also kept here. The manuscript, a gift from the Prince of Britain and Northern Ireland to the Crown Prince of Abu Dhabi, is considered one of the earliest and most important surviving records of the Holy Quran.

The theme of knowledge continues with the library, which has a large collection of 50,000. The shelves of the room hold publications, books on archaeology, history, humanities and social sciences, statistics, government, culture, literature, art, and other sources of public interest. The pride of the room is a manuscript of a 13th-century atlas of astronomy in the form of astronomical tables, drawings, and maps of the ancient world.

There is a gift store with high quality products in the Abu Dhabi Presidential Palace.

If you get hungry, visit Dhiyafat Qasr al Watan restaurant. Its menu includes light snacks, healthy meals, coffee and other drinks. There is a similar concept at Legma restaurant. Both establishments are located at the exit of the Royal Palace of Abu Dhabi.

Another highlight of the Emir’s attraction is the Palace in Motion light show. It starts at 7:30 p.m. Thursday through Sunday. In the 15 minutes that the show lasts, viewers can enjoy a three-act play from which they learn about the past, present and future of the state and the nation.

The image is projected onto the facade of the palace using a special system of an intelligent panel and a Riedel Artist 32 communication matrix. Creative Technology (CT) handles the technical maintenance of the show. By the way, Palace in Motion is one of the largest projection installations in the region.

By bus: you need a transport that goes to the Emirates Palace Hotel and beyond. Thus, to the Visitor Center will take № 034, 069, 009. The stop is called Qasr Al Watan. An organized shuttle service will take you to this architectural masterpiece.

By Car: The distance from Abu Dhabi International Airport is around 40 km if you take the shortest route. Take Abu Dhabi – Sweihan – Al Hayer Rd/Al Khaleej Al Arabi St/Arabian Gulf St/E20 and King Abdullah Bin Abdulaziz Al Saud St. Leave your car in the parking lot at the center. It is free of charge.

READ
5 things to do in the Costa Brava, Spain

By cab : There is a wide choice of taxi services in the Emir capital. These are services of Emirates Transport Taxi, National Taxi, Arabia Taxi, Uber. All are available through the website.

The Abu Dhabi Presidential Palace of the Sheikh in Abu Dhabi on Google’s panorama: view from outside