Towards the end of my first week in London, I caught myself thinking that when I find myself in the center, no matter where I go, I still end up in Piccadilly Square. Yes, that’s a strange observation. 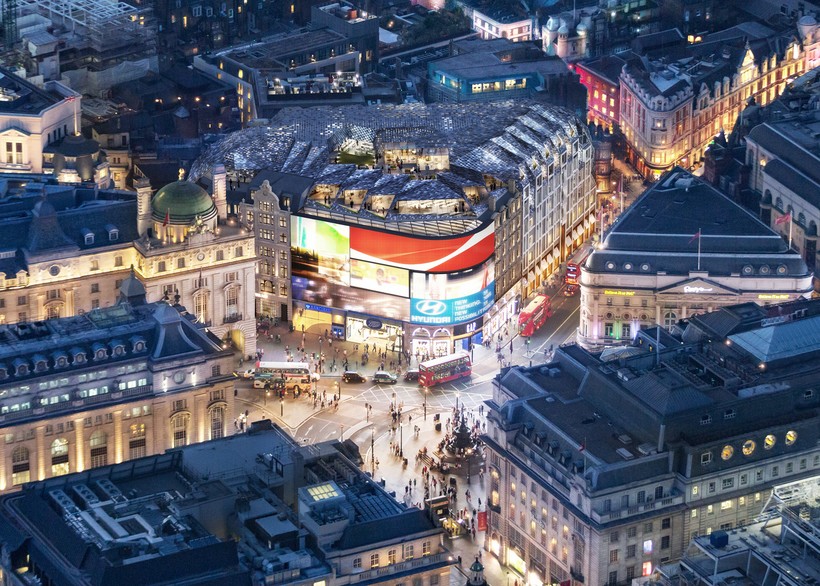 It’s not a must-see tourist attraction like Trafalgar Square and the National Gallery, but it’s the junction of three major streets: Piccadilly Street, Regent Street and Shaftesbury Avenue. You’ll find crowds of people here at all hours of the day and night.

As I said Piccadilly Square, or as it is called Piccadilly Circus, is located in the center of London at the intersection of three major streets. I, for example, walked onto it from all three.

It’s not easy to navigate through them because there are real crowds of people. However, I would still recommend taking the time to walk, if not all of them, then at least one of them:

Walking is definitely a good idea, but there are probably those among us who will want to get to the square by transportation:

READ
Traveling through Italy: islands where volcanoes are smoking

The second time I was there I decided it was a good idea to find out what the square was about and what its history was about. As it turned out, the name Piccadilly came from the activities of Robert Baker, a merchant who sold very fashionable in the 17th century picadilly collars. So Baker got rich, and his name became known all over London. Not surprisingly, later on Baker was immortalized, if not by himself, but by collars that made him a fortune.

The square itself appeared in 1819. It was needed to connect Piccadilly Street and Regent Street. The square, as Londoners like to do, was made in the shape of a circle. By the way, this is where the second part of the name “sercus” came from, one of the meanings of the word circus – “circle” or “circular square” in English. In 1886, another road was added to the square – Shaftesbury Avenue. Since then, Piccadilly Square is not a perfect circle, but the name, of course, remained.

READ
Culture and attractions of the Philippines 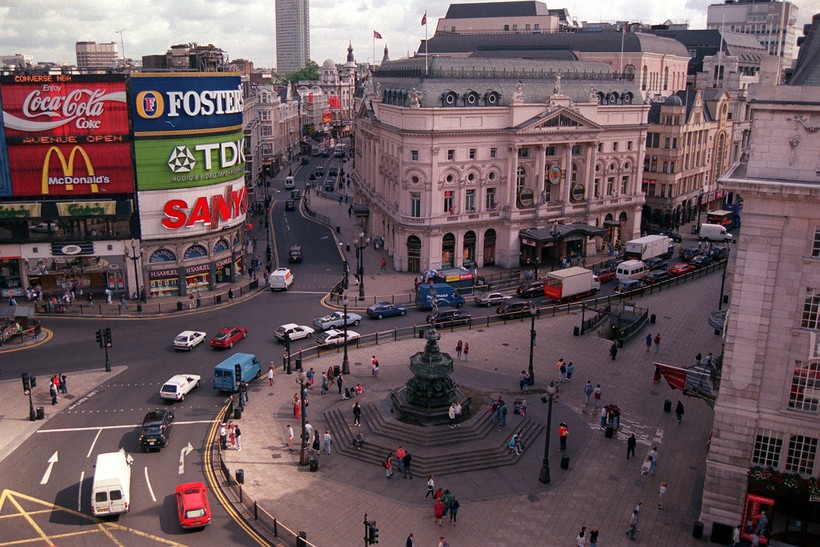 In 1906, the Piccadilly Circus subway station was opened, after which it was reconstructed due to the large crowds. In 1960, Piccadilly Square wanted to modernize, making it two stories. The project was probably impressive, at least I would have been interested to see it. However, the idea never came to fruition.

Piccadilly Square, despite its not-so-large size, has its own attractive landmarks (I suggest you definitely check them out): 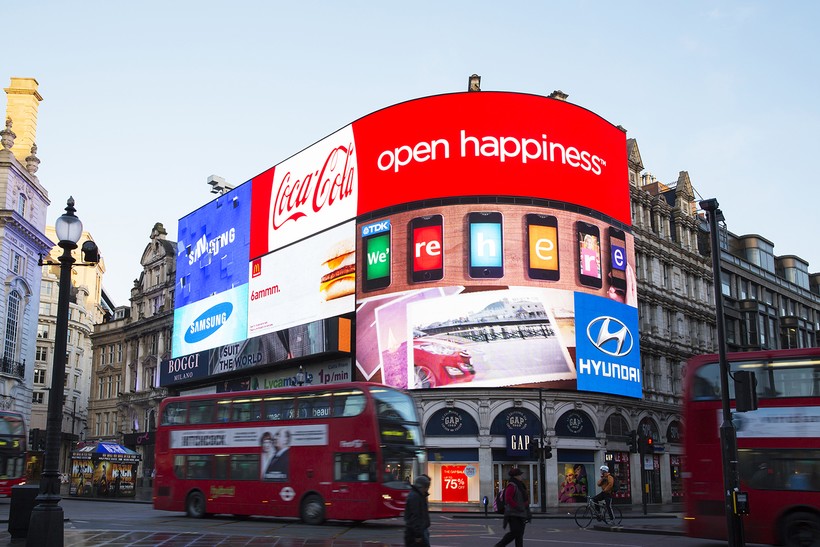 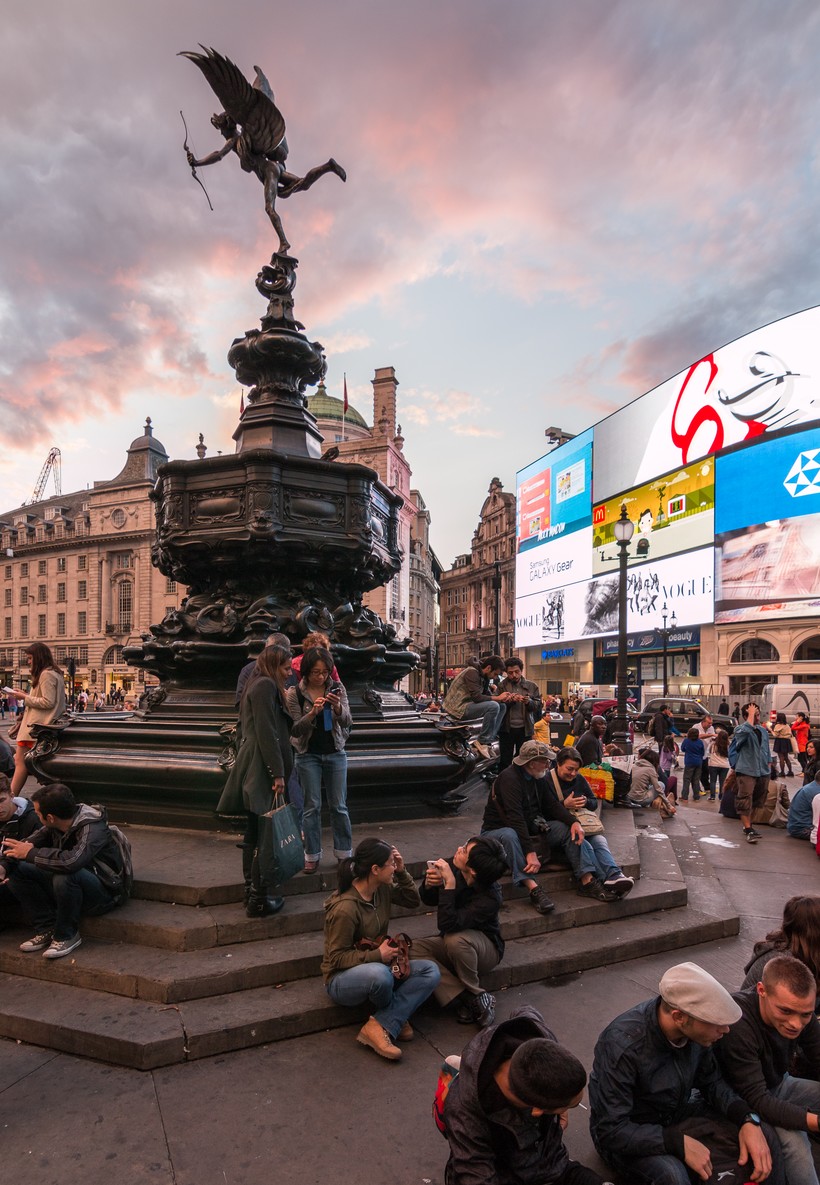 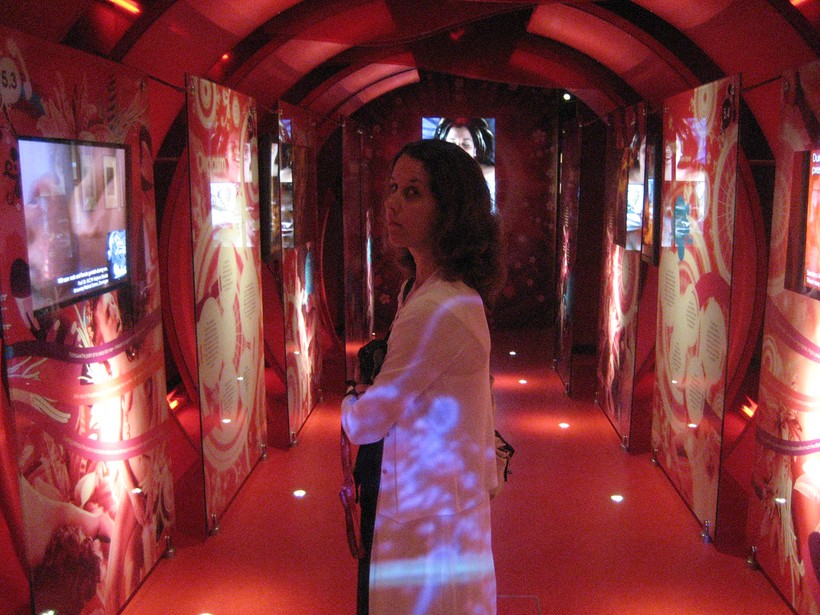 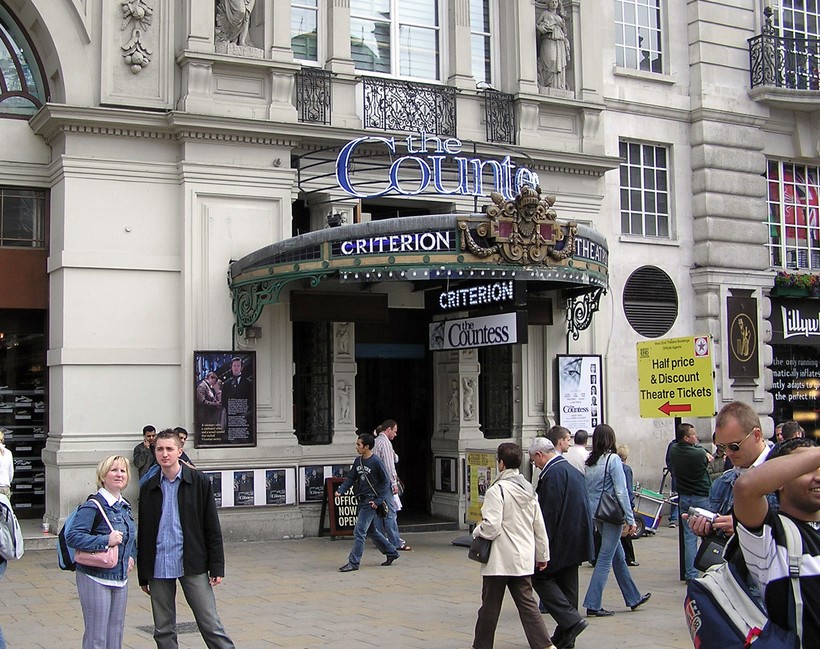 READ
What to see in Jerusalem: Jaffa Gate 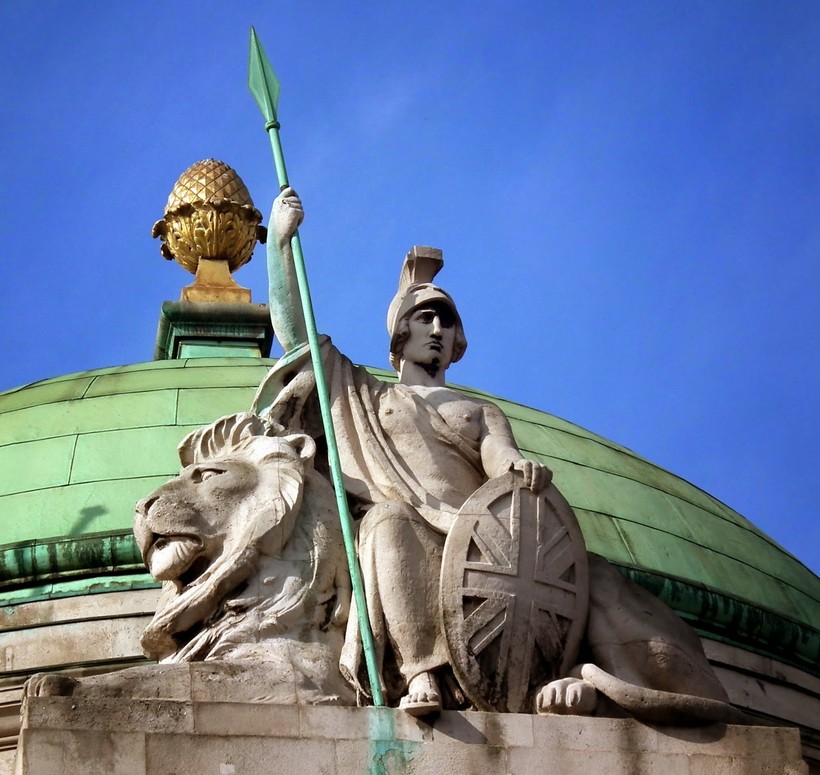 Piccadilly Square is the center of the city, so there are plenty of restaurants there. After all, it is a very popular place, so here you can find both famous and expensive restaurants, as well as with democratic prices.

In addition to the already mentioned Planet Hollywood, the famous chef Jamie Oliver’s Diner is located near the square. Prices for main courses there start at 8.8 € (7.5 £). Or, for example, the Jewel Picadilly restaurant – from 10.5 € (£9) per dish. 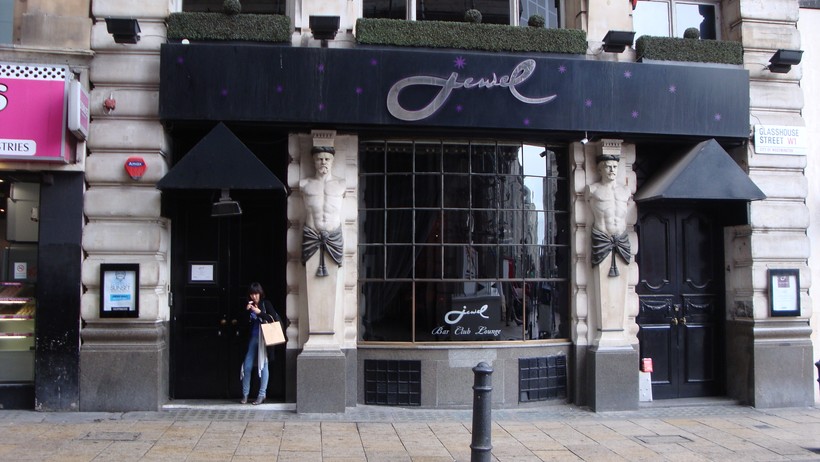 Those who want to save money can buy a meal at McDonald’s on Shaftesbury Avenue or Pizza Hut on Piccadilly Street and the square. Here you can eat for 5.8-7 € (5-6 £). I, in fact, decided not to spend too much, so I took a sandwich and a cup of coffee at Café Nero and sat down on the steps of the fountain on the square, as many Londoners do.

Piccadilly Square may not be on the first place among the main tourist places of London, but it is definitely worth to be here at least once. 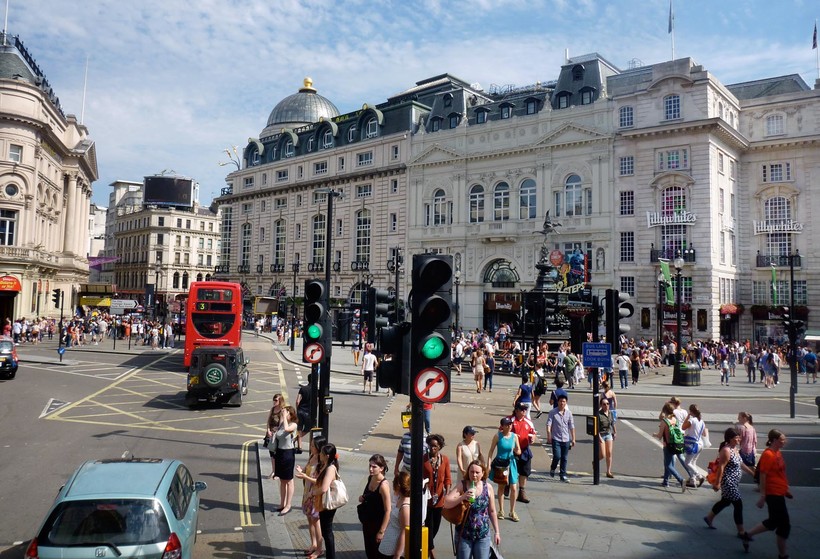 Take a leisurely stroll, or sit by the fountain with a cup of coffee, and admire the fine historical buildings, modern offices, and red double-decker buses that line the square. 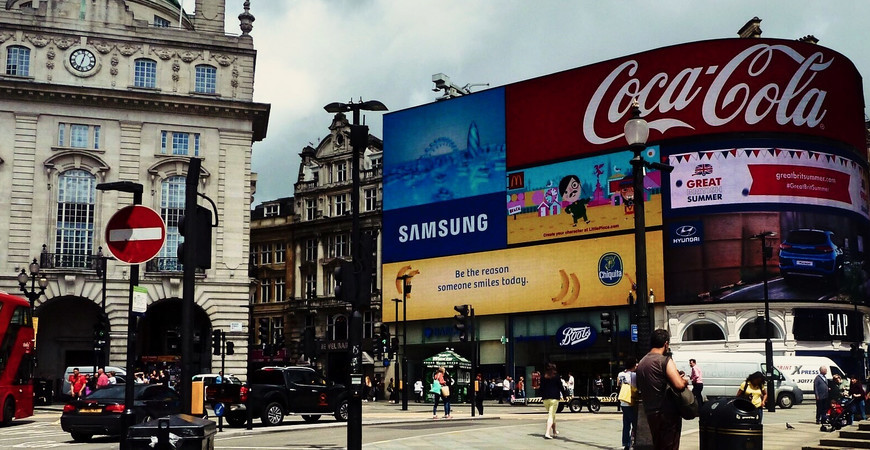 Piccadilly Circus is London’s most crowded square. It is a major transport hub and always bustling with activity. Piccadilly Square connects the lively Regent Street, Piccadilly Street and Shaftesbury Avenue.

The history of the origin of the name of the square is interesting. At the beginning of XVII Piccadilly Street had another name – Portuguese Street. On this street lived a famous businessman of the time, Robert Piccadilly. He earned millions selling rigid collars, characterized by jagged edges and a wide cord, which tightened the ends of the collar. These collars, called “piccadillies,” gave their name to the street and the square.

The square was formed in 1819. Originally it was circular in shape and connected only Ridgers Street and Piccadilly Street. In 1886, Shaftesbury Avenue was connected to Piccadilly Square. The shape of the square changed, but the word “circle” (Circus) in the name remained. In 1906, a Piccadilly Circus subway station opened under the square. The number of passengers at the new station was so great that already in 1928 it had to be reconstructed.

The small Piccadilly Square is full of unusual sights.

In the center of the square is a fountain, which is crowned by a statue of a winged naked hero. According to the idea of the author, Sir Alfred Gilbert, it is the image of Anteros, the younger brother of the more famous mythical hero Eros. Unlike his frivolous relative, Antheros represents serious love intentions and mature feelings. The statue was created in honor of Lord Shaftesbury and his philanthropic activities. However, the townspeople did not understand the artist’s intention and mistook Anteros for Eros. To smooth over the ambiguity of the situation, the sculpture was presented as the Angel of Mercy. And the place itself near the fountain became a traditional meeting place for London residents and visitors.

The attraction of Piccadilly Square, which is impossible not to pay attention to, are the huge illuminated advertising billboards. They were installed here in the early XX century and have become one of the most exclusive and expensive advertising sites in the world. Of course, about a hundred million people pass through Piccadilly Square each year. In 2017 there was a major renovation of the advertising media. Six billboards were replaced by a curved LED screen of almost eight hundred square meters. The revamped billboard is able to adjust the display of advertisements based on the gender, age and mood of passersby. Regular advertisers such as Coca-Cola and Samsung have continued to place their ads on the updated site.

Another original venue in Piccadilly is the Criterion Theater. The Criterion opened in 1874 and is one of the oldest theaters in London. The Criterion’s theater stage is entirely underground. It was dangerous to illuminate such a room with gas lamps. The Criterion was therefore one of the first theaters to have electric lighting. Today a variety of theatrical productions are still played there.

Do you prefer the cinema rather than the theater? Then check out Planet HollyWood, a restaurant that Hollywood stars love to visit.

A few more interesting places are on Piccodilly Street, in the immediate vicinity of the square. The Royal Academy of Arts is an authentic royal mansion. The Academy exhibits works of both famous classical masters and modern art. You can check into The Ritz London, or you can just stroll past and admire the chic architecture. Another great building is St. James Church, built in the 17th century. There are often classical music concerts and, on Saturdays, a traditional crafts fair held near the church.

Find and get there

Piccadilly Square is located in Westminster, the historic heart of London. It is a major transport hub, so it is easy to get here.

There are many bus routes through Piccadilly. For example 3,12, 19, 23 and others. If you want to see Piccadilly Square at night, you will need buses with the letter “N” in the number. For a full list of routes running through Piccadilly, see the official London public transport website.

You can also take the Tube to Piccadilly Circus station. Conveniently, you can get off the tube to any part of the square.

You can take the famous London cab service. Black cabs can be stopped on the street. A less expensive mini-cab can be ordered through the official Kabby website or through the Uber app.