The Mount Rushmore National Memorial in the Black Dakota Mountains is four colossal portraits of U.S. presidents carved right into a sheer wall-the most American work of art of all American wonders.

Mount Rushmore is a rather recognizable symbol of the United States. This landmark has appeared in a crazy number of movies, literary works, cartoons, anime and games. You’ve probably seen it in at least one of them. There are huge bas-reliefs of 4 U.S. presidents carved into the mountain. Each of the presidents made a huge contribution to the development of the country, so according to the developers of the project deserves to be immortalized in the granite rock.

The history of Mount Rushmore

Apparently, this mountain was “born” to be a monument to great ancestors. Back in the days when this land was inhabited by a tribe of Indians known as the Lakota, this mountain already bore the name “The Six Forefathers.” Now, of course, they are not six, but still, Rushmore is a tribute to the ancestors. The former Mount Six Forefathers is located in South Dakota near the town of Keystone.

It got its modern name when the monument began to be built. The creation of the bas-reliefs began in 1927, and the mountain was renamed in 1930. And they did it again because of the creation of sculptures in the mountain. The businessman and philanthropist Charles Rushmore allocated the fabulous sum of $5,000 for the creation of four bas-reliefs of the presidents. It was the largest private investment of that time. In addition to that, he organized and paid for expeditions to this region of the United States and was a highly respected man in South Dakota. Therefore, in order to somehow thank the sponsor, it was decided to rename the mountain and name it after the patron of the arts.

The sculptor Gutzon Borglum was commissioned to work on the project, but it was John Robinson, president of the South Dakota Historical Society, who came up with the idea of erecting the monument in the rock. The appearance of the monument, however, was not what he had in mind. Robinson saw Indians and cowboys portrayed on the monument, but Borglum managed to change his mind.

The sculptor himself was already 60 years old when construction began, but he enthusiastically took on the task. Construction continued until 1941. The work was very hard, because it was conducted at an impressive height and with the use of sophisticated tools. Just to get to the top of the mountain, it was necessary to overcome 506 steps.

In this case, it was constantly necessary to work with explosives. Dynamite was used to break off large chunks of rock. It was estimated that 360,000 tons of rock had to be removed from the construction site. After the rough work was done with dynamite, workers used pneumatic jackhammers to cut the contours of the heads. Other tools were also used for more precise work.

In the end, 14 years later and with the help of 400 workers who worked continuously on Mount Rushmore, four eighteen-meter heads of presidents were created, looking down on their nation from a bird’s eye view. Unfortunately, the sculptor himself never saw the completion of the major project of his life. He died shortly before the end, so his son finished the project.

The symbolic meaning of the monument to the presidents

Gutzon Borglum himself did not just create a monument to the Fourth Presidents of the United States, he wanted to convey something more. He wanted to remind people of the high ideals that their forefathers preached. He believed that each of the four presidents had given America something special.

For example, George Washington was placed in bas-relief on Mount Rushmore for being able to lead Americans to democracy. Thomas Jefferson was immortalized in granite because he created the Declaration of Independence. Abraham Lincoln was honored for abolishing slavery in the United States, while Theodore Roosevelt was elected because of the construction of the Panama Canal and because he promoted government and business.

That’s how the huge heads of the 4 presidents carved in the granite of Mount Rushmore appeared. The national memorial called Mount Rushmore covers an area of 517 hectares and welcomes 2 million tourists every year who want to see one of the most famous symbols of the United States. 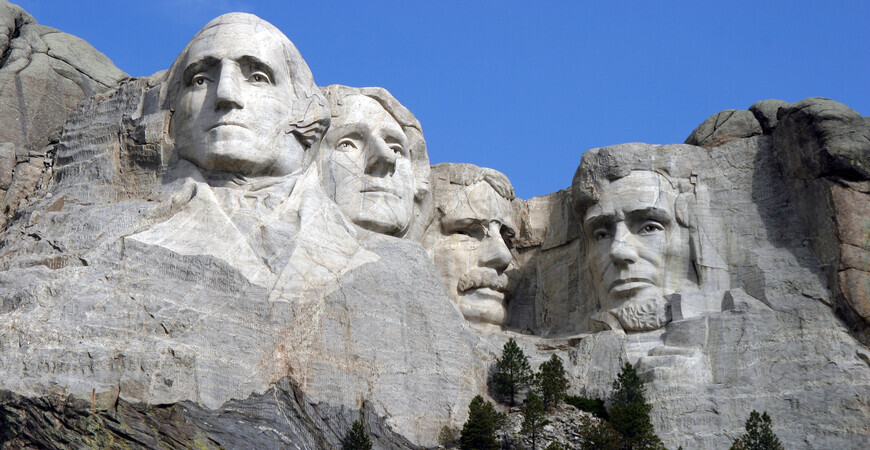 Mount Rushmore with the carved portraits of 4 American presidents is located in South Dakota. This memorial has become one of the symbols of the country immortalizing the memory of prominent politicians – George Washington, Thomas Jefferson, Abraham Lincoln, Theodore Roosevelt, who made a significant contribution to its development. Bas-reliefs are 18 meters high, and for 14 years about 400 workers under the direction of sculptor Gutzon Borglum worked on their creation. For some of them it was just a job to earn income, but others realized that they were the creators of the grand memorial, recalling the glorious pages of the history of the country.

Each year the site is visited by about 3 million travelers from different countries, the largest flow of tourists is observed in the summer months. In addition to the monument itself, visitors can visit the local museum dedicated to the sculptor and the workers who helped him, and other interesting objects.

It was sculptor Borglum who selected the persons whose faces we can see on Mount Rushmore. According to him, these presidents were the key events that influenced the development of the country. George Washington’s portrait was carved into the mountain, under whose leadership the country achieved independence from Great Britain and he became the first president of the United States. Because of Washington’s great contribution to the birth and formation of the new state, the sculptor decided to single out his image, making it the most prominent in the composition.

The author of the project chose Thomas Jefferson, who was one of the authors of the Declaration of Independence, as a symbol of the growth of the country; Louisiana was bought from France during his administration, which doubled its territory. Abraham Lincoln’s presidency came at a difficult time for the country – the Civil War, he did much to abolish slavery in the United States, so the sculptor included him in the memorial. Another important political figure is Theodore Roosevelt, whose profile is also carved in the rock. As president, he was involved in negotiating the construction of the Panama Canal, the shortest route from the Atlantic Ocean to the Pacific.

The idea for the mountain memorial belonged to historian Doan Robinson, who believed it would attract many travelers to the state. His idea was to create sculptures of the country’s discoverers or an Indian chief. But Gutzon Borglum had a point of view – it was the presidents under whom the country made significant achievements that were honored to be immortalized in this way. He also chose Mount Rushmore, which until 1930 was known as the Six Forefathers, named after Charles Rushmore, who organized the first expeditions to the area and allocated a large sum to build the memorial.

Work began in 1927 and continued until 1941. Despite the dangers associated with the natural conditions in which the project was carried out, not a single fatality occurred on it. Dynamite, pneumatic hammers and the more familiar tools of the time such as drills and chisels were used to create the sculptures. When you look at the result of their work, you understand the effort and craftsmanship it took from the workers. Borglum had planned to sculpt up to his waist, but due to lack of funding, the scale had to be scaled back. The sculptor himself did not live long enough to complete the work; it was completed by his son.

Over time, cracks began to appear in the sculptures, which were filled with a special mixture, today for the safety of the memorial Rushmore is also carefully monitored and used to combat the formation of cracks by modern means.

Travelers rarely come here just for this memorial, it’s more of a waypoint on their way to nearby national parks. One option for visiting the bas-reliefs is to book a tour with an agency that takes care of all the arrangements, including transfers. Among the advantages and accompaniment of the group by a guide, who introduces participants to the interesting facts about the place in detail. However, here you can meet many independent travelers who came here by car.

There is no charge for the sightseeing itself, but you will have to pay for parking the car (motorcycle), its full cost is $10, for pensioners – $5. The paid document is valid for a year.

What can a tourist do here? The path to the attraction begins with the alley of columns with state flags. You can not limit yourself to viewing the memorial from afar and take a walk on the so-called Presidential Trail, which is 0.6 miles long. It allows you to get up close to the bas-reliefs and experience the local nature. Tourists are advised to come here in the morning to enjoy the view and take good photos while it is still not so crowded. Many liked the evening visit – after 20:00 here you can see a light show and a movie about the history of the memorial, which tourists usually watch from the nearby amphitheater. Spectacular bas-reliefs look and in certain evening hours, when the lights are turned on.

On the territory is also an information center where you can learn more about the objects of the memorial and the hours of their work. It will be interesting to look at the museum and workshop, dedicated to the sculptor and the workers who participated in his project. The exhibition introduces the tools and techniques that were used in the construction. In addition, tourists can go to a bookstore and souvenir store, have lunch in a cafe and try the local ice cream.

READ
10 Stunning Caves in the U.S.

The bas-reliefs at Mount Rushmore are not served by public transportation routes, so a trip organized by a travel agent is a good option for many tourists. Others prefer to rent a car and travel to the site by it. It is one of the most popular and comfortable ways to travel around the U.S. and allows you to see many of the country’s many attractions along the way, without the rigid time constraints that are common on organized tours.

The mountain is near the town of Keystone and is about a four-mile drive away. The nearest airport is in Rapid City, about 32 miles from the memorial.

How to drive from Rapid City Airport

A shuttle service is also available at the airport, in the case of a large company, it will not cost as much as for a single tourist.