Mountain of Crosses is a very famous place. Many tourists and pilgrims visit this shrine, it is also popular with local residents.

A shrine in the middle of a field

The sanctuary on the hill is 12 km north of Siauliai, one of the most important cities of Lithuania. The height of the Hill of Crosses is not high. It is rather an elongated mound, grown among fields and meadows on the left bank of the river Kulpe. Mountain is about 10 m high, 60-70 m long and 40-50 m wide. The mountain has one more name – Castle. It is connected with the wooden fortress located on the hill in XI-XIV centuries. In the middle of the XIV century. it was destroyed, along with other neighboring castles during the invasion of crusaders in Lithuania. After Žemaitija was baptised, a chapel was erected on the hill. 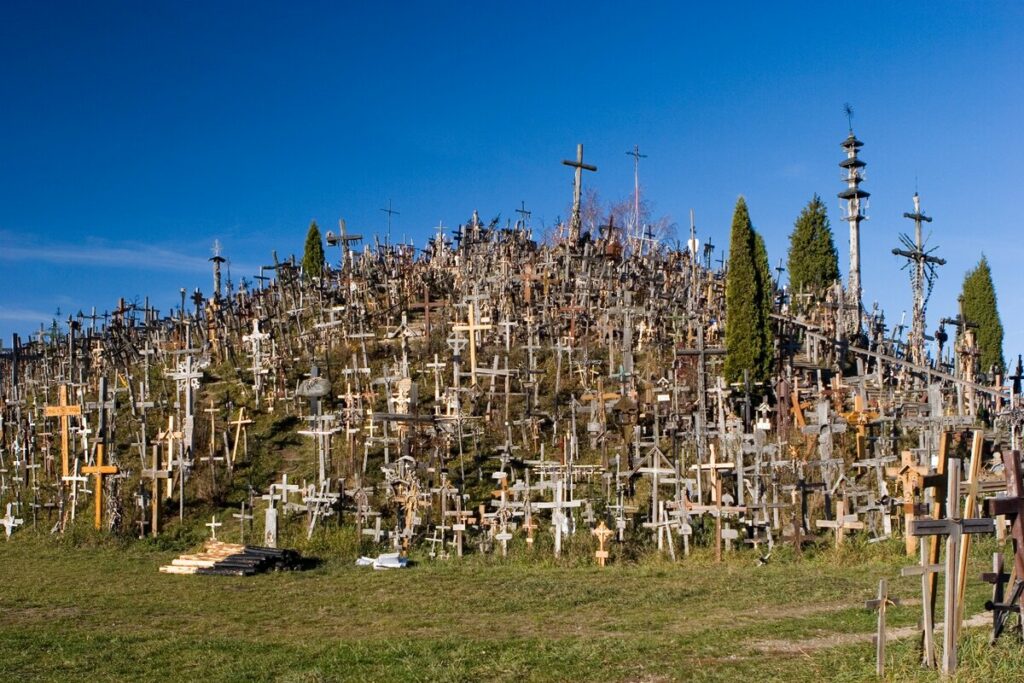 A shrine in the middle of a field

The Hill of Crosses became famous after the November Uprising, in which many Lithuanians took part. Since then, crosses have been placed on the hill in memory of the fallen rebels. This tradition was revived after the failed January Uprising, during the massive Russification of Lithuania . Crosses were also placed here in gratitude to God for recovery, praying for healing or something else. In the middle of the 19th century there were about 20 sculptures on the hill, in 1900 – about 130, and in 1914 – 200 . In the twenties of the twentieth century. hill was strewn with a veritable “forest of crosses,” the number of which was estimated at about 400. In the early 1950s there were about a thousand. After the visit of Pope John Paul II, a papal cross was erected on the Hill of Crosses. The crosses on the hill are so densely packed that one can move between them only by marked paths .

Crosses are works of art 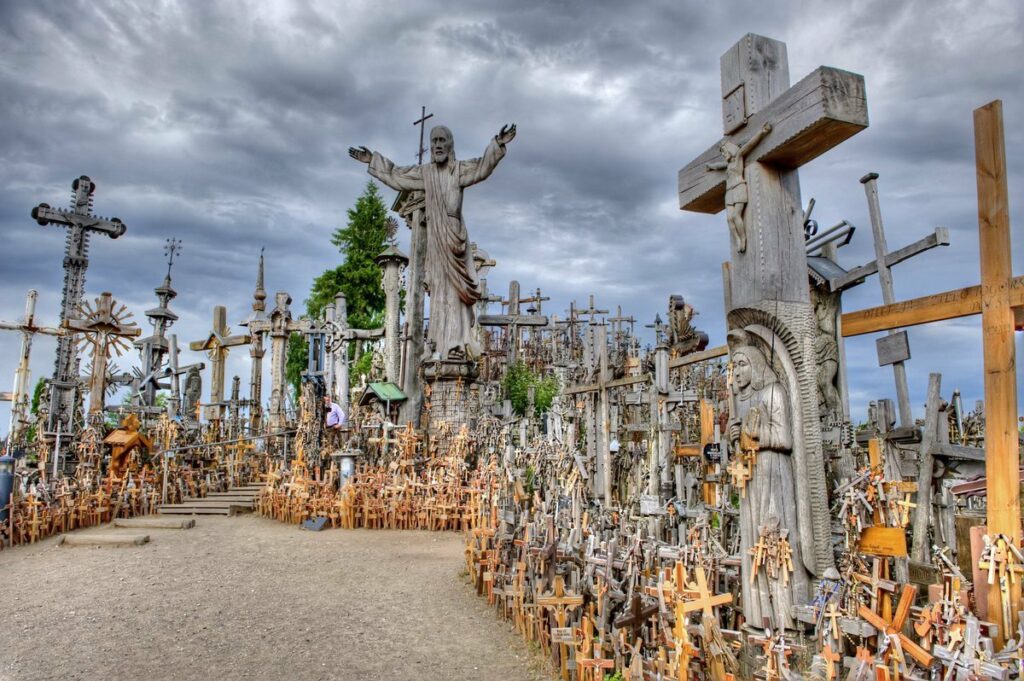 Crosses are works of art

Many of the crosses on the hill are real masterpieces, unique creations of Lithuanian craftsmanship. They are usually made of wood, usually oak, 1 to 5 meters high, often covered by a small canopy. Creating their unique work their authors skillfully combined elements of sculpture, blacksmithing, architecture, and sometimes painting. The carved ornaments decorating them bear in themselves archaic echoes of pagan motifs. Among them are the sun and birds, embodying the Tree of Life. Many of the crosses were made by self-taught folk craftsmen, of whom Vincas Svirskis is the most famous. Some of his works are made of solid oak and decorated with numerous sculptures and ornaments. Next to these unique crosses there are much more modest crosses made from two simple branches, paper or sometimes even drawn on the ground with a stick. Many of them have a plaque or leaflet with requests attached.

Swayed by gusts of wind, the fluttering crosses make wonderful sounds of different tones, reminiscent of music. When it rains, it is enriched by the noise of the drops falling on the “forest” of crosses. 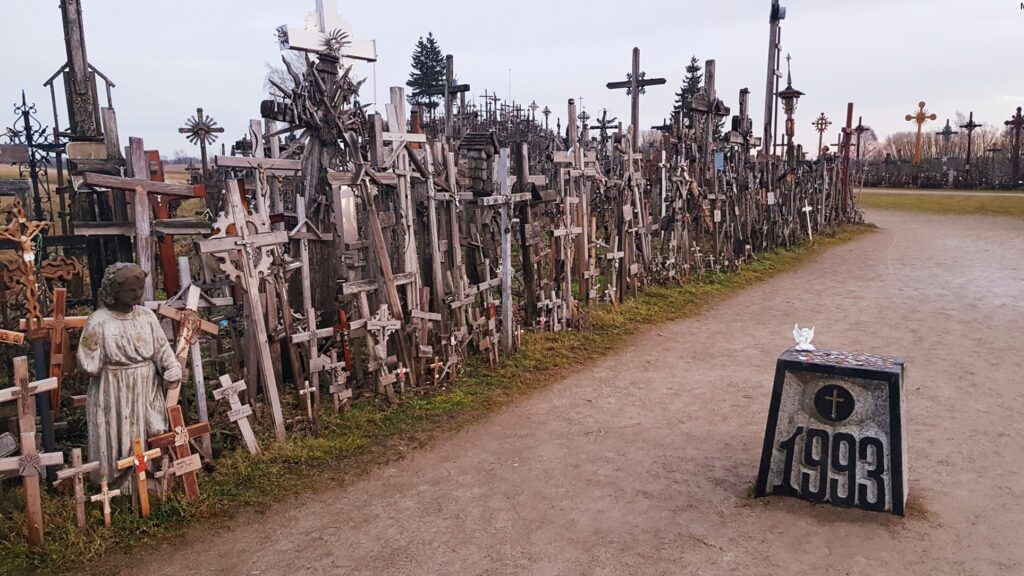 Standing up to the bulldozers

In the 1960s and 1970s the Soviet authorities repeatedly tried to destroy the sanctuary on the hill. During one of the first actions, when the authorities used military vehicles and bulldozers, the metal crosses were scrapped, the wooden crosses were burned, and the stone crosses were smashed. Today, in memory of the destroyed crosses a memorial stone has been placed in their place. The hill was empty for a while. A few years later, when the authorities relaxed their anti-religious policy, the crosses began to reappear. Often they were installed secretly, at night.

1) In the 1970s, there was a plan to flood the hill with the waters of the Kulpe River . 2) To block the way to the Hill of Crosses, its surroundings were once even declared rabies infested. 3) During archaeological research on the hill were found iron knife, arrowheads, glass beads, animal bones and fragments of pottery XIII-XIV centuries. 4) According to one of the legends, once on this hill there was a Catholic monastery, which for unknown reasons has gone under the ground. 5 ) There is a version that the tradition of placing crosses on the hill has pagan roots.

Mountain of Crosses is popularly called the Holy Mountain. It is a place of pilgrimage and one of the symbols of unity of the Lithuanian nation .

Hill of Crosses in Lithuania 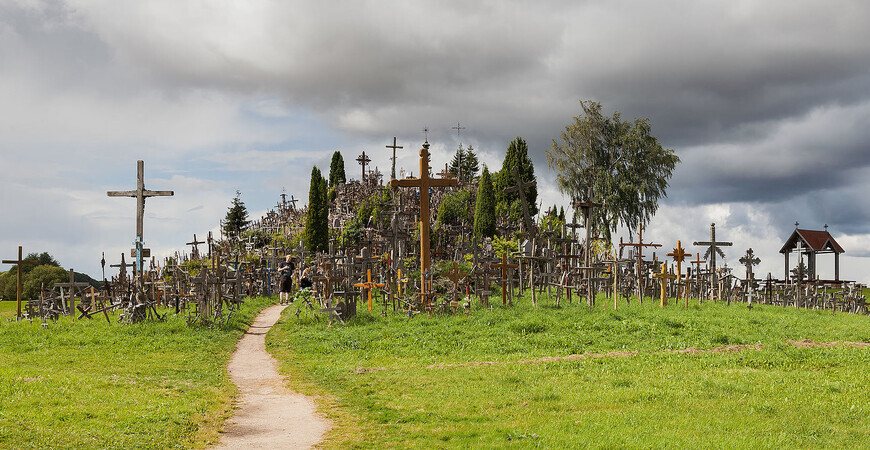 Mount of Crosses is one of the religious landmarks of Lithuania. It is a place of pilgrimage and a local shrine. The mountain is famous for the hundreds of thousands of crucifixes on a small piece of land. It is estimated that in 2007 there were about 200,000 crosses. Every year there are more and more of them.

The Hill of Crosses is an object of cultural heritage of national importance that occupies an area of 6.3786 hectares.

On the surface, Mount of Crosses looks like a cemetery, because of the large number of crucifixes on the hill, but it is not. This site has long been recognized as an archaeological site of cultural heritage.

Today, there are crucifixes of different Christian denominations on the Hill of Crosses. There is a gilded Jewish hexagon and a crescent, the symbol of the Islamic religion.

History of the Mountain of Crosses

Crucifixes on the hill are first mentioned in chronicles from 1850, but it is believed that the first crosses appeared in the early 1830s. They were erected by relatives of the victims of the uprising because the tsarist government did not allow the victims to be properly commemorated. More crucifixes appeared after the 60s of the XIX century.

At the beginning of the 20th century, the Hill of Crosses became a sacred place. Pilgrims from different countries began to come here. In addition, the hill became a place of religious services.

During the Soviet regime, the Hill of Crosses was repeatedly attacked by the government. For almost 20 years, Soviet authorities had been trying to completely raze the place to the ground. In 1961 the first attempt was made. All of the crucifixes were broken and fallen, some were burned.

READ
Top 10 most beautiful cemeteries in the United States

Up until 1984, the Soviet authorities made numerous attempts to keep people away from the site. Pilgrims came here secretly to restore the Mountain of Crosses. The hill on which the crucifixes now stand is a man-made elevation.

Since 1997, every year on the last Sunday of July, a church service has been held on the hill. In 2000, at the initiative of the Pope, a monastery was built and consecrated north of the hill. In 2007, more than 50 crosses on the hill were included in the register of cultural values in Lithuania. Today the Hill of Crosses is under the patronage of the Diocese of Šiauliai.

There are many legends and beliefs about the Hill of Crosses. It is believed that good luck will always go with anyone who leaves a crucifix on the hill.

According to one legend, the mountain was formed on the site where the monastery fell into the ground. At the time, a resident of a nearby village had a child who was terminally ill. So the father built a cross and went to the hill where the monastery once stood. He placed a crucifix on the hill with a prayer that the child would be cured. After that, a miracle happened – the child fully recovered.

After his visit to the mountain of crosses, the Pope visited the Franciscan monastery on the hill of La Verna in Italy. He urged the Franciscan brothers to erect a church at the foot of Mount of Crosses in Lithuania.

The church was designed by the architects Angelo Polecello and Nunzio Rimaudo. The monastery was solemnly consecrated in early July 2000. Asphalt roads lead to the church and there is a small parking lot nearby. On the territory of the monastery there are several chapels, its own library and a chapel decorated with stained glass windows by the artist Algirdas Dovydėnas.

READ
Sightseeing in Turkey: The tower of Hidirlik in Antalya

Where is the Mountain of Crosses

This religious landmark is located in northern Lithuania, near the city of Šiauliai. At the foot of the hill is the Franciscan monastery and on the other side is a small chapel. The information center is located half a kilometer west of the Hill of Crosses.

How to get to the Hill of Crosses in Lithuania

The hill is located 12 kilometers from the city of Siauliai. You can get to the hill by “Šiauliai – Joniškis” municipal bus, which leaves from platform No. 12 of Šiauliai bus station. You have to buy a bus ticket to “Domantu” stop. From this stop it is about 2 km to the mountain on foot.

You can reach the hill from Siauliai by car. The trip will take about 15-20 minutes along the A12 and the highway 4033. For parking near the Hill of Crosses you will have to pay the parking fee of 0.9 EUR for cars.

You can take a local cab from Siauliai to the mountain. There are Senelio Mašina, Dandinas, Taksi Šiauliuose operators in the city.