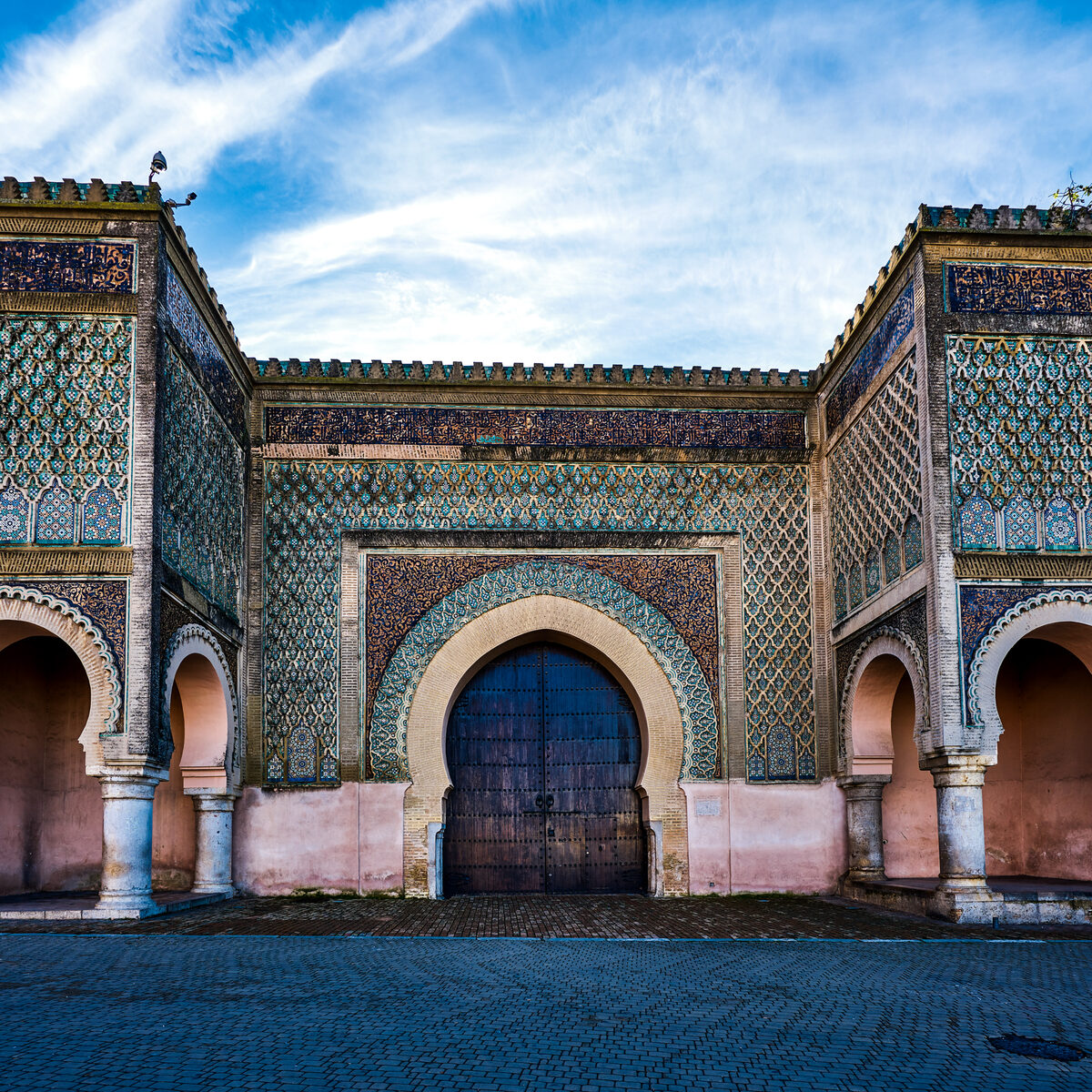 When Sultan Moulay Ismail made Meknes his capital, he wanted the most beautiful gate in the Maghreb to lead to the city. He baffled his architect, the former Christian slave Mansur. The latter nodded silently. Mansour had chosen the best tiles for the mosaics, the finest craftsmen had worked on the fine moldings, and the columns had been brought from the ruins of Volubilis in Rome.

When he saw the gate, the sultan was pleased. “Tell me, could you make a gate more beautiful than this,” the sultan asked the architect, squinting his eyes. “Oh yes, my lord,” the architect bowed. According to legend, he was executed the next morning. 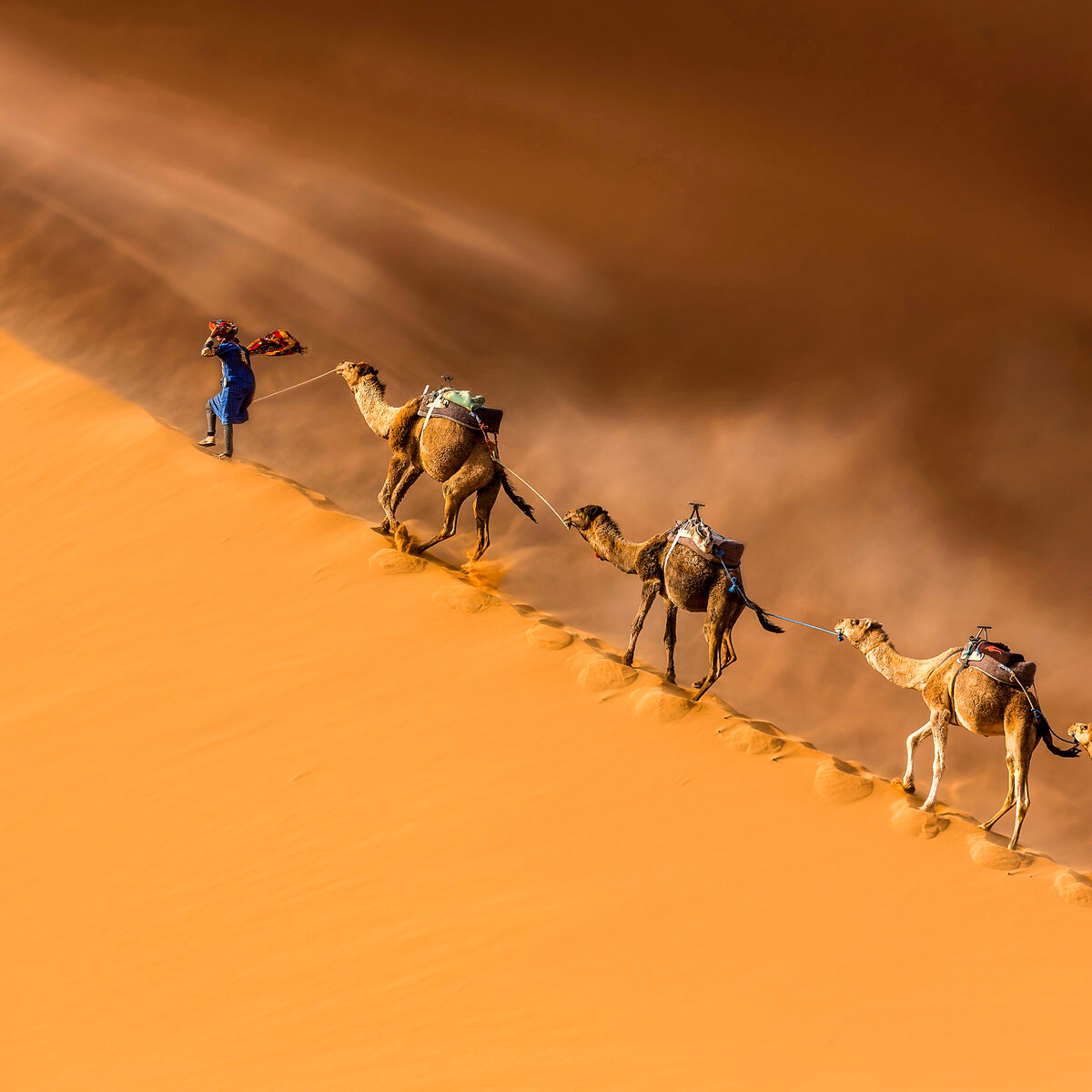 Usually one goes to Algeria or Namibia for this, but a more civilized classic could be arranged. Morocco.

The dunes of the Sahara await you in the vicinity of the village of Merzouga near the border with Algeria. You can go beyond the outskirts and immediately begin to climb a huge barkhan. The dunes here are up to 150 meters high, so you can see Algeria from the top. The dunes draw smooth lines against the bright blue sky. The caravans with tourists cast clear shadows. Photographers and those who come here find themselves in a photographic paradise. And at night the world is illuminated by huge stars – they say there are no such stars as in the desert anywhere else.

What is it, the taste of the Maghreb? It combines Berber traditions and Arabic recipes, sweetness and spice, lamb from the foothills of the Atlas Mountains and freshly caught sea bass and dorado from the Atlantic. The result is an exotic polyphony of flavors that lingers under the tongue.

Tagine is a dish cooked in a special ceramic dish – tagine. There are more tajines in Morocco than there are stars in the sky – tajine with beef and prunes, with chicken and lemon, with lamb and dates. All this is simmering with spices in a ceramic tagine until it begins to melt in your mouth.

READ
Sumava - a unique region with its castles

Couscous – this humble grits is even part of the intangible heritage of UNESCO. Crumbly, with vegetables, with spices, Moroccan couscous is different from what you may have tasted at home. The Seven Vegetables couscous is especially popular in Morocco.

Mint tea – it is served in small cups sweet and strong. Tea is poured in a special way: the kettle is lifted high and poured in a thin stream to create foam in the glass. 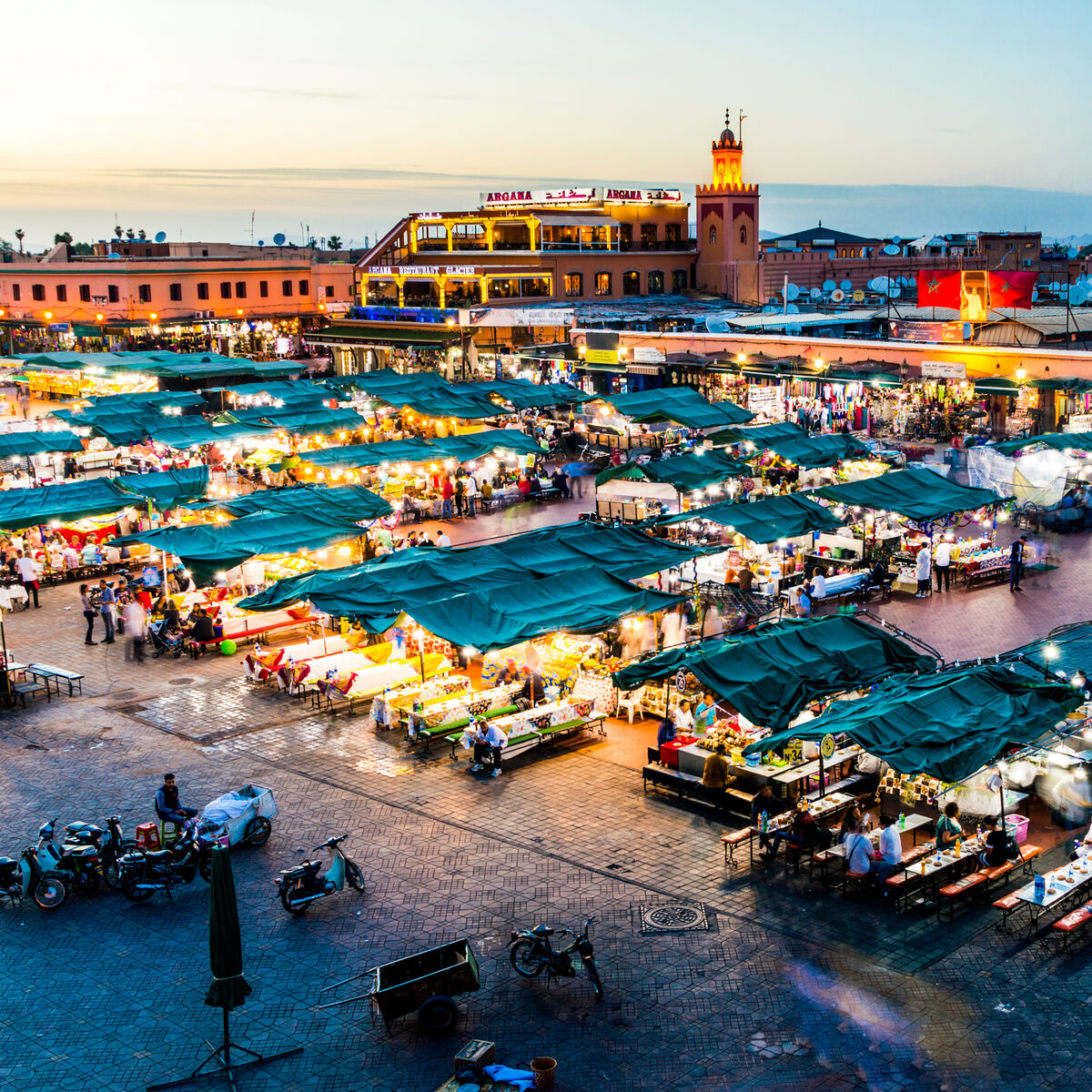 Paint your palms with henna, listen to Berber storytellers, watch the work of a juggler and a snake dance – all this you can do on the square of Jema el-Fna. Smoke rises from food stoves, Moroccan oranges are juiced, and hypnotic pulsations of ethnic Gnahoua music are heard. Every night on this square a portal to the ancient Maghreb opens.

The square takes its name from the Square of Beheadings, a thousand years ago they used to cut the heads off bandits and hang them on the city gates. Now the square is called the soul of Marrakech, the “showcase of the traditional Maghreb. 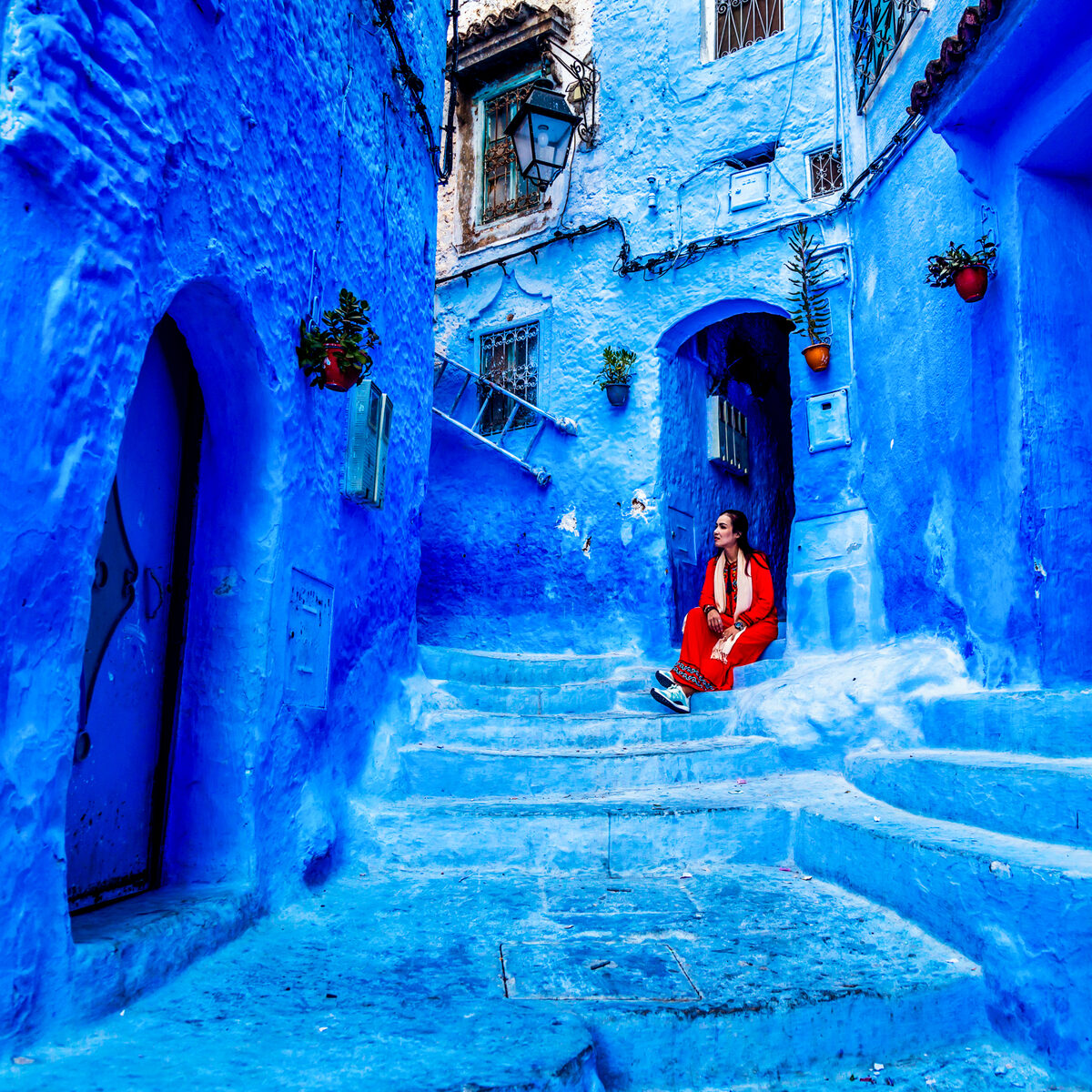 Piercing blue walls, a scattering of flower pots, arches and alleys – Chefchaouen is considered the most Instagrammable city in Morocco. The city is said to have been repainted blue by Andalusian Jews who were exiled from Spain – they believed that if you look at the color blue a lot, you can get closer to God.

Until the twentieth century, no foreigner could enter the city – only Jews and Muslims were allowed into the closed Shefshauen. Europeans learned of the blue city only when a French traveler disguised as a Jewish merchant entered it. Today tourists from all over the world come to Shefshauen to take pictures. 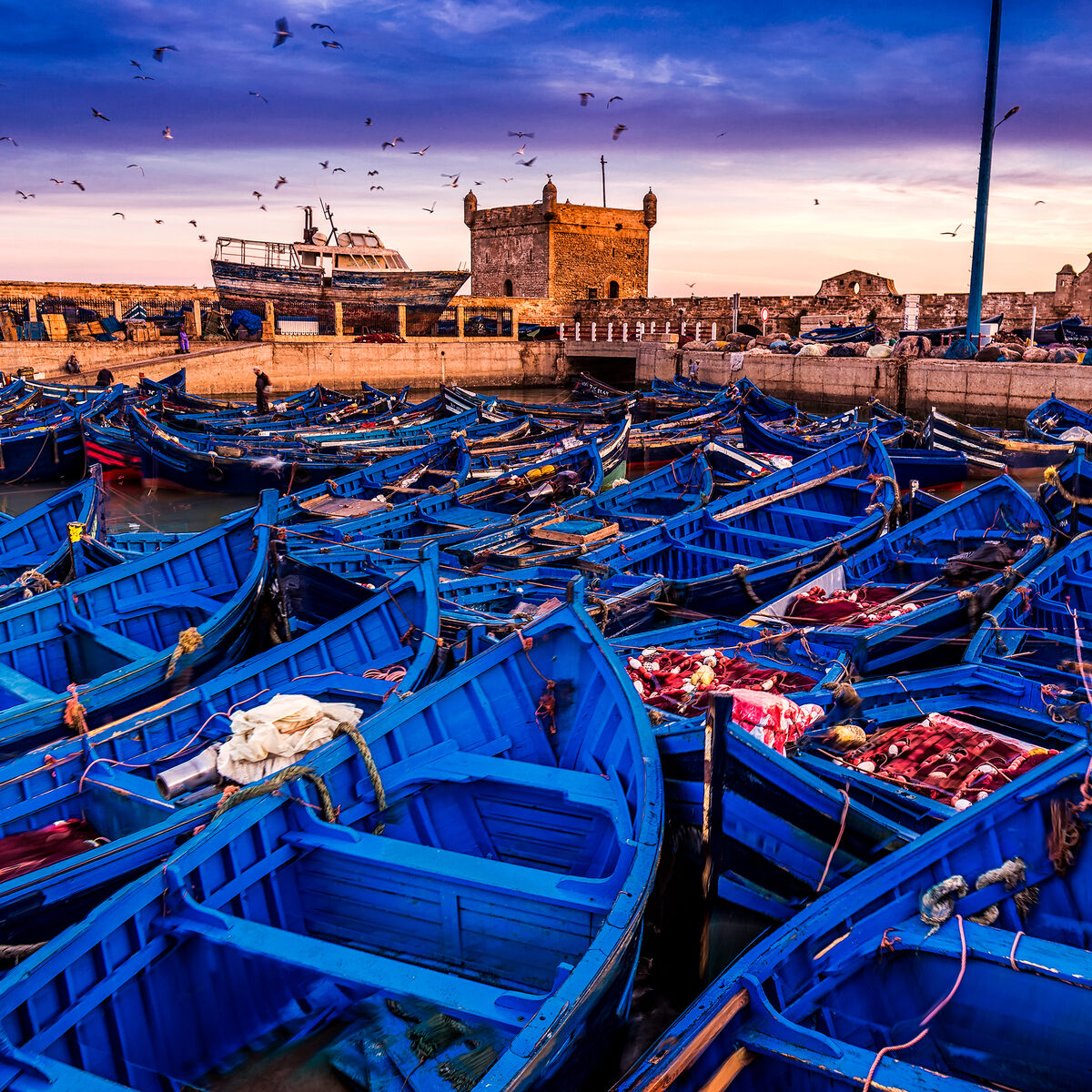 Screeching seagulls, sea nets, blue boats and ancient fishing boats – the chaos of Essaouira’s port is uncommonly photogenic. Nothing seems to have changed since the sixteenth century and a Jolly Roger sail is about to appear on the horizon.

Pirates often took refuge in the local port and the surrounding coves. Then hippies found a haven here, and Jimi Hendrix wanted to buy an entire block in Essaouira. Essaouira was the setting for the slave trade in Game of Thrones, where Daenerys bought slaves for her army. Today, tanned surfers roam the white-blue city and long beaches.

What to bring from Morocco? To go to Morocco, all you need is a small backpack. Put some tried-and-true sneakers in it. An external battery to charge your phone. A shawl to sling over your shoulders on an autumn evening. And a water bottle. To return from Morocco, you need a suitcase. To take away the atmosphere, and also a lot of nice gifts. Let’s name just the most important and necessary

Argan oil is considered one of the rarest oils in the world and Morocco is lucky to have argan trees. This oil rejuvenates and moisturizes your skin and makes your hair silky.

Tagine is a special ceramic cookware, all cooked in which melts in the mouth. Taghin is designed so that the lower part of the dish is fried, and the rest is cooked on steam. The meat in the tagine is especially tender.

Babushi is the traditional leather shoe a la Little Mook, with a long back and a sharp curved toe. They come in many colors and are decorated with bells and stones. 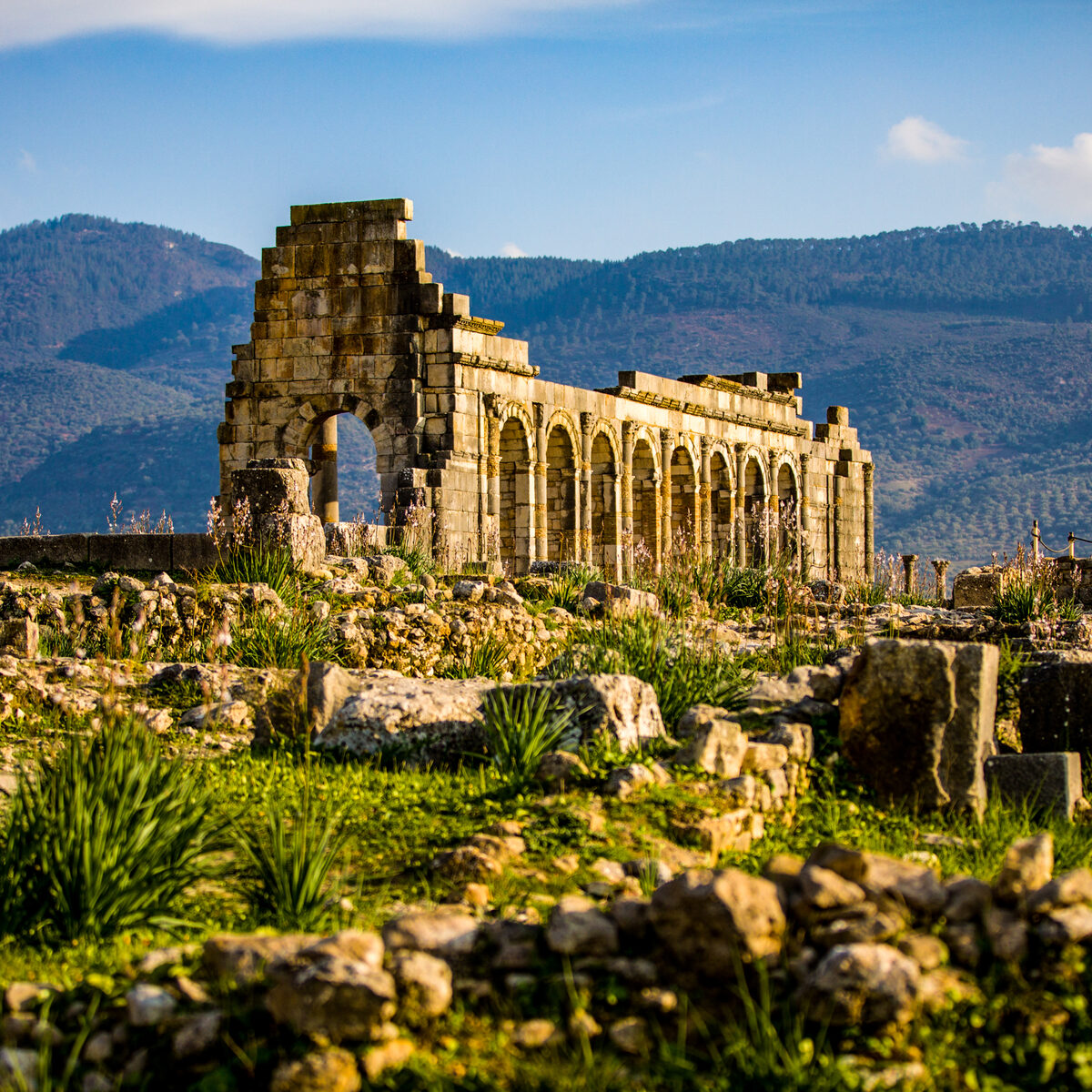 Once there were bustling olive groves and vineyards, and the Roman city of Volubilis was considered the largest city in North Africa. Volubilis means generosity – the city was generous with grain and oil. Trade flourished, columns were erected and the forum was bustling. Water was by aqueduct and the noble houses had baths with hot water.

The bustling ancient city, where the Roman patricians retired, was left with bright mosaics of the exploits of Hercules and picturesque ruins. Around the Corinthian columns Zeffirelli filmed many scenes of “Jesus of Nazareth”. 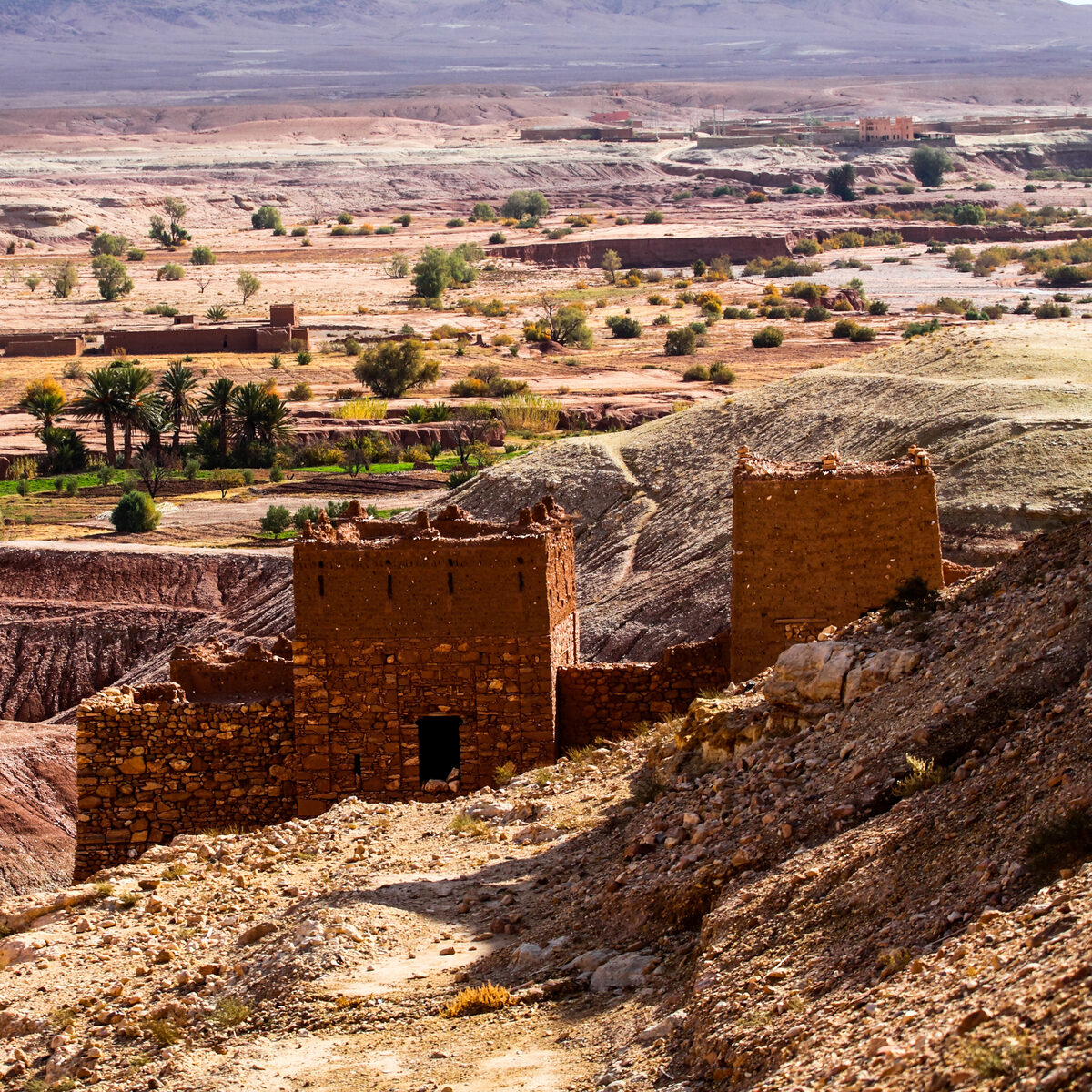 The Berber fortress was built to guard the caravans that carried goods from Marrakech to Timbuktu. Five centuries ago, camels shouted gutturally and merchants rustled in caravanserais here. And when the caravan route lost relevance, the earthen fortress was beloved by filmmakers.

Scenes from “Gladiator” and “Alexander” were filmed in the fiery red fortress. It played the role of the city of Junkai from “Game of Thrones,” where slave owners and their slaves lived. At the same time, the thousand-year-old fortress is not a scenery, but alive and real. With a tangled labyrinth of streets and locals. 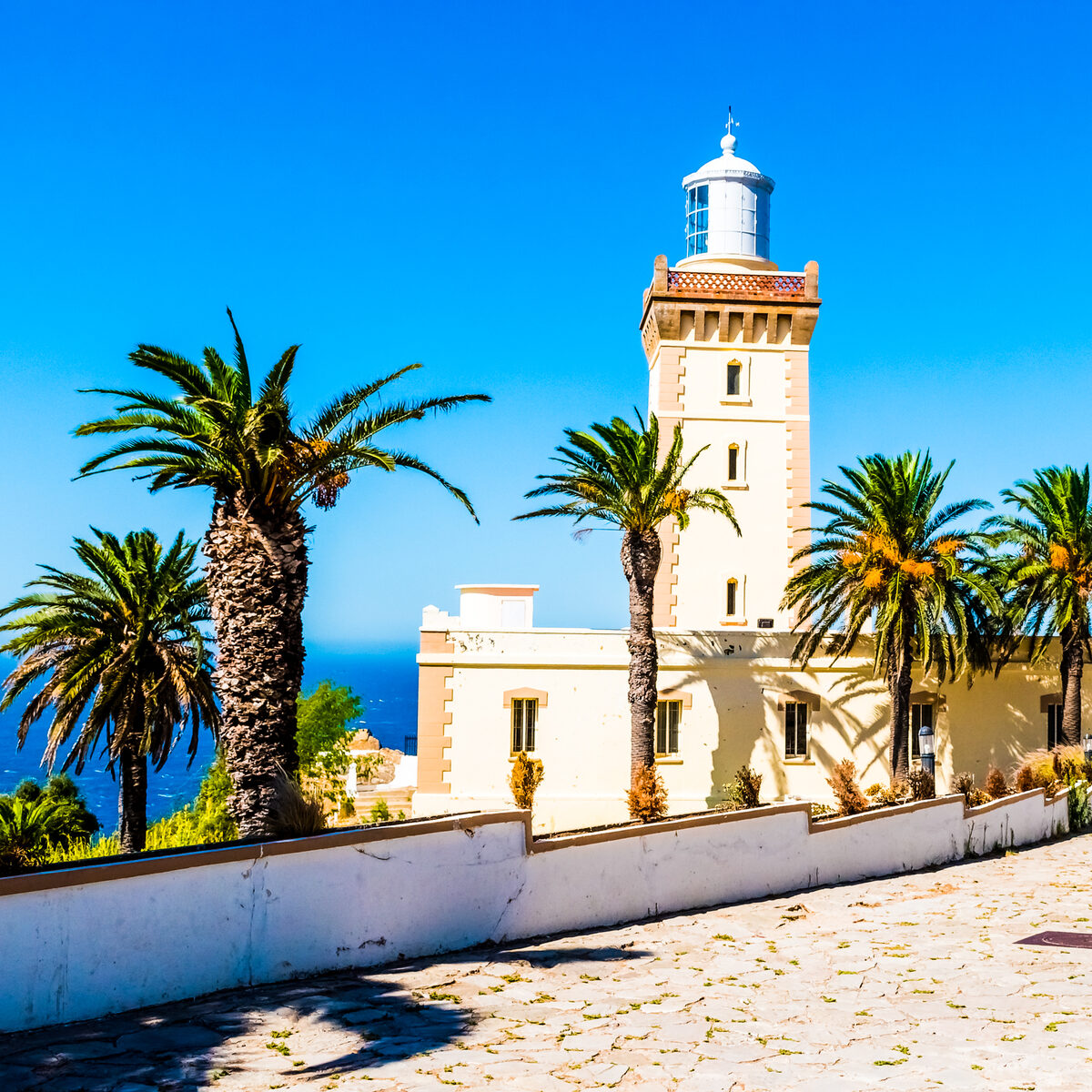 “Kasbah” in Arabic means fortress or citadel. The fortress in port Tangier was built by the Portuguese – it has a palace, a mosque and a fantastic observation deck overlooking Gibraltar. From it you can see the ships rushing on both sides of the strait, and breathe the salty air of the Atlantic. A hundred years ago, Tangier was ruled by six European countries, which attracted smugglers, spies, writers and European musicians. The atmosphere of the city is addictive – not for nothing did Jarmusch put the main character, the magnificent Tilda Swinton from the movie “Only Lovers Live”, in Tangier.