Montefalco is one of the most beautiful villages in Umbria .

Medieval village just 15 minutes from Foligno and less than an hour from Perugia, overlooking the valleys of Topino, Tiber and Clitunno, welcomes you with an explosion of colors, flowers and aromas of the typical cuisine of this wonderfully blooming land.

1)Town Hall Square. Located on the highest point of Montefalco and known as Piazza del Certame, it has an almost circular plan. All the main streets of the village converge here, so it’s a great starting point for visiting the stores and souvenir shops.

From the square you can see the town hall of 1200 with its bell tower, added in 1800 (open to the public), the Municipal Theater located in the former church of San Filippo Neri and many noble palaces including Palazzo Bernardino de Cuppis. 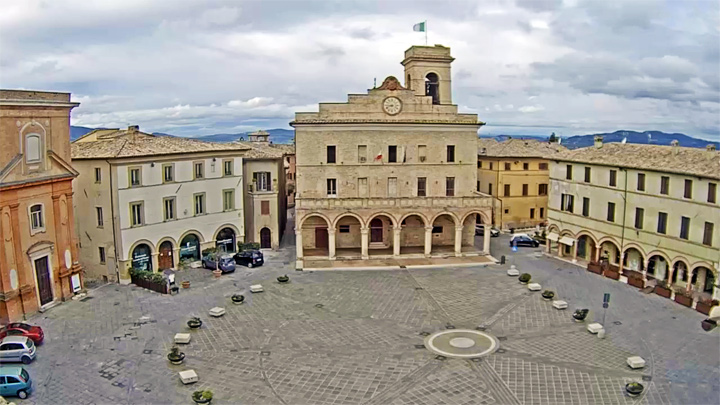 2) Church-Museum San Francesco. This museum church is a small but wonderful surprise. The apse is a beautifully preserved fresco on the life of the saint, divided into 20 episodes and 12 scenes, done in 1452 by Benozzo Gozzoli. Inside we can also admire another work by the same author, the story of San Girolamo, and in the aedicule to the left of the portal we can see the nativity scene created by Pietro Vannucci. 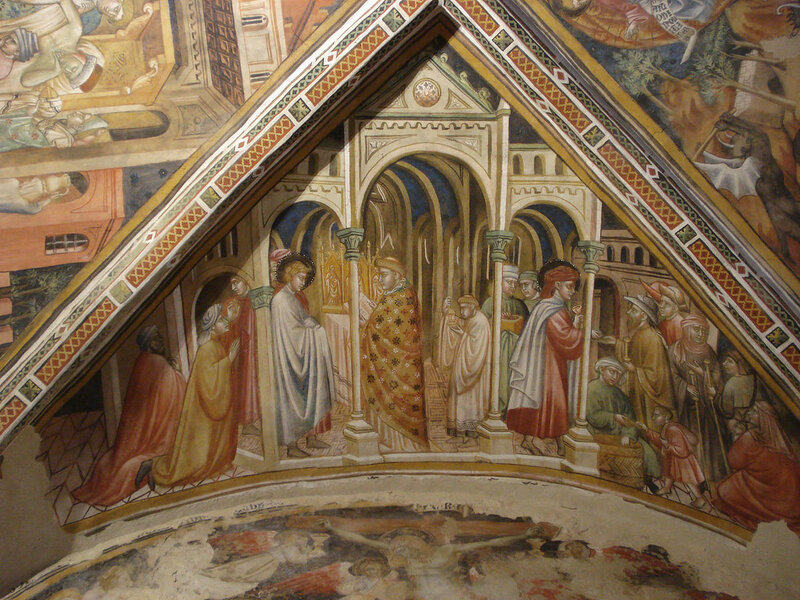 3) The sanctuary of Santa Chiara della Croce. Inside the sanitario you will find a chapel decorated with valuable frescoes from the fourteenth century and a silver urn that holds the body of Saint Montefalco (not to be confused with Santa Chiara d’Assisi). Adjoining the sanctuary is a secluded monastery with works of incredible beauty and the Santa Chiara garden, which was once the garden of the complex and today is a place for walks and reflection.

READ
10 things to do in Palma de Mallorca in one day, Spain 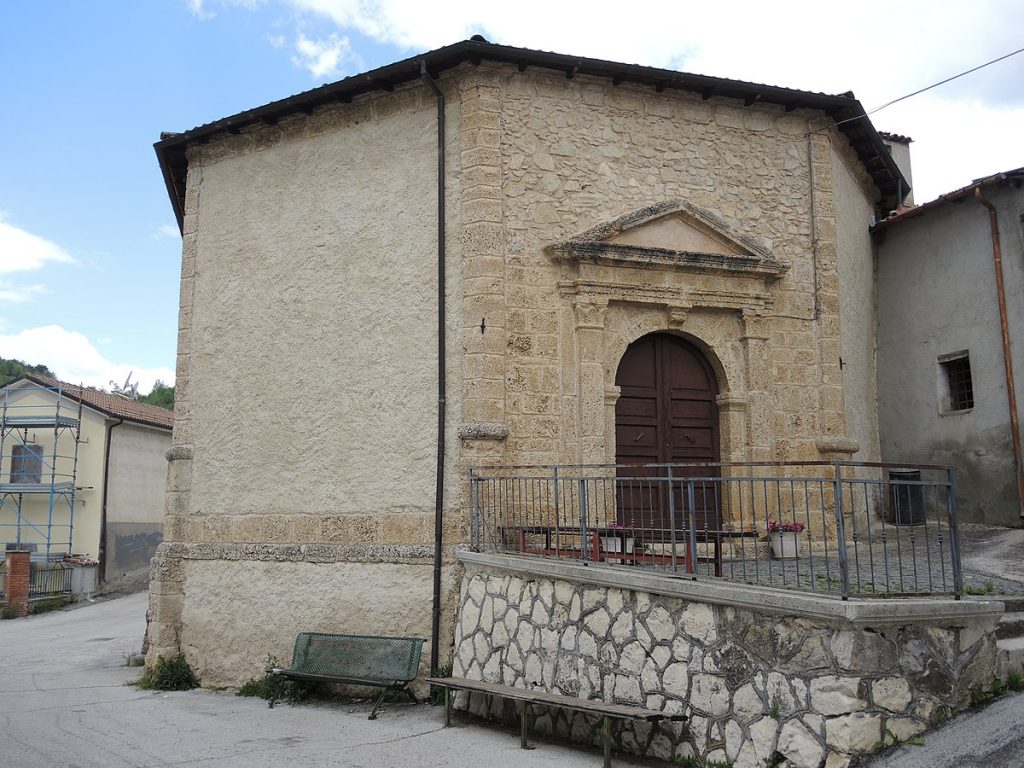 4) Church of Sant’Agostino. The Church of Sant’Agostino, built in the second half of 1200, is characterized by an elegant stone façade and a beautiful portal with small columns and capitals. The interior, consisting of a single nave, displays frescoes of the fourteenth and fifteenth century Umbrian school and a reliquary containing the body of the legendary Pellegrino di Montefalco.

5) Belvedere. Directly opposite the Porta della Rocca gate, behind the walls of the historic village, you will find a panoramic point that explains well why Montefalco was renamed the Peril of Umbria. From here you can admire the crossing of the valleys of the Tiber, Clitunno and Topino, the vineyards of Sagrantino and a respectable view of the magnificent hills of Umbria.

6) The Sagrantino Road. Montefalco is one of the villages that are part of the Sagrantino road, along with Gualdo Cattaneo, Giano del Umbria, Bevagna and Castel Ritaldi. Exploring these places will allow you to visit typical Umbrian DOCG vineyards and learn about the timeless local history and traditions. 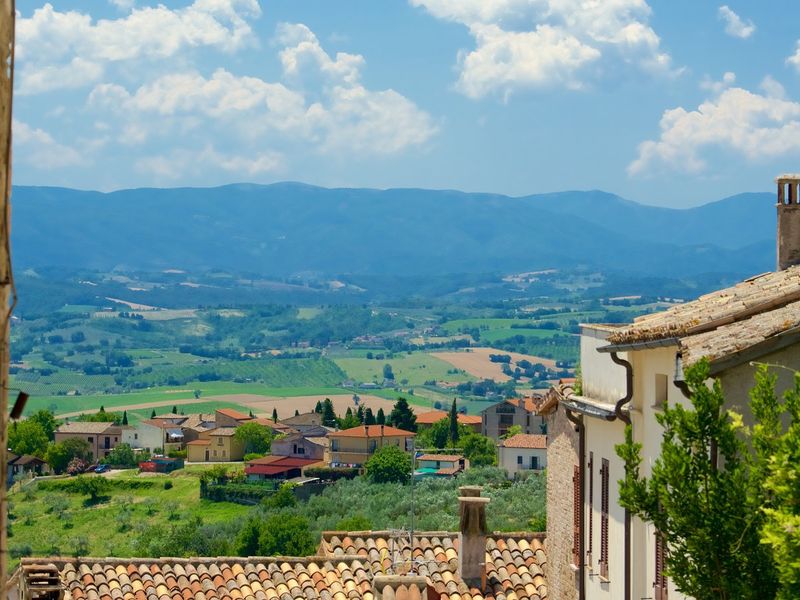 7) The walls of Montefalco. In ancient times it too had a remarkable castle. Built as a Roman castle from which you can still see the decumanus maximus and the cardo, for about a thousand years it was equipped with walls. It was destroyed during the domination of the Papal State, but parts of the fortress are still visible, such as the walls surrounding the village with its four gates of Camiano, Della Rocca, Verzier and Federico II.

Church of San Bartolomeo. This church is the oldest in the city. It has undergone several changes over the years, but in the area of the apse you can still see the single lancet window, framed by a multi-layered window decorated with vine shoots.

Inside are important works of art, such as the 8 side altars and the high altar, which hides the Madonna and Child. 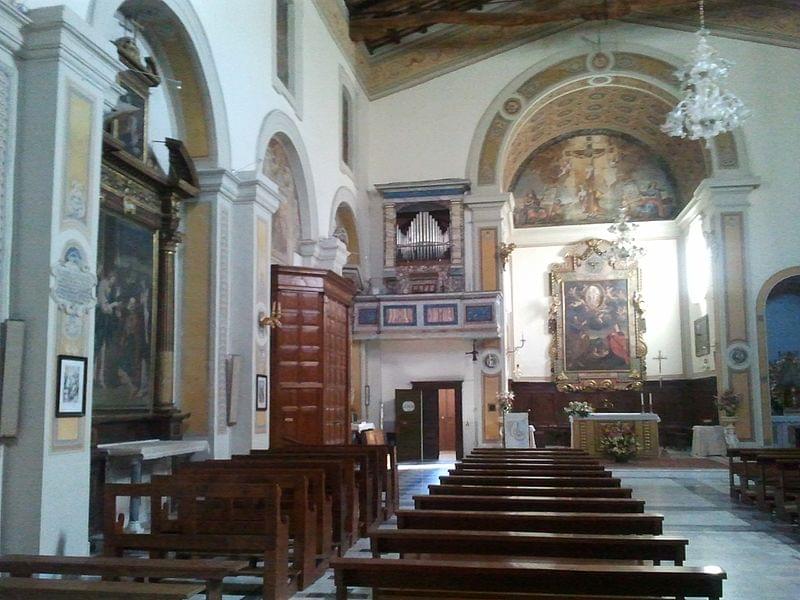 9) Open Cellars Action. Once in the city of Sagrantino, you certainly can’t miss a visit to the Cantine Aperte. The event takes place in May and its protagonists are all the cellars of the village and those outside the walls of the municipality of Montefalco. In Cantine Aperte you can taste young wine accompanied by typical appetizers.

10) Open Combines event. Montefalco is not just wine. According to the beautiful tradition of Umbria, it also produces high quality first cold-pressed olive oil. During the first week of November you can take part in open mills with guided seminars and tastings, and in early December the factories open their doors again so you can taste the new oil.

Leave your car in the Porta San Francesco parking lot and enjoy the view from the belvedere in front of the Porta della Rocca gate . Walk along the streets of Banister Umbra and Corso Mameli to reach the Beddini Pastry Bar, where you can enjoy a delicious breakfast of homemade pastries and fresh pastries. After breakfast, you can go to the church of Santa Chiara della Croce to visit not only the main buildings, but also the beautiful garden. Dedicate the morning to visiting the sanctuary to enjoy the peace that reigns there and take advantage of the silence for your meditation gathering.

After visiting the sanctuary, stop by Il Coccorone restaurant, passing through Via de Cuppis and Vicolo del Castellano. After lunch, go to the Church of Sant’Agostino to admire its fourteenth-century Umbrian frescoes. Then head to Piazza del Comune and reach the museum complex San Francesco, which houses works of great interest. End your visit to Montefalco with dinner at Federico II wine store.

3 What to do in the evening

Although Montefalco has a wide variety of wine bars, there are no real nightclubs. This is not a problem for those who want to party just move to Foligno, less than 15 minutes by car, and you will be spoilt for choice. The best pubs, clubs and discos.

READ
12 things to do in Vernazza, Italy

Montefalco is a medieval village located in Umbria, Italy’s greenest region. A chain of picturesque hills stretches between Assisi and Spoleto, on one of the peaks rises Montefalco, surrounded by a stone wall.

The name of the village is translated from Italian as “falcon mountain”. A local legend says that the Emperor Frederick II of Swabia, during his stay here, saw a great number of falcons and decided to rename Coccorone Montefalco. For all wine lovers, Montefalco is strongly associated with sagrantino, a red grape variety that grows only here. It gives powerful, tannic and full-bodied wines. The narrow streets running up to the central square are decorated with wooden barrels and permeated with wine atmosphere. Cosy oenotheques, restaurants and winery stores entice visitors with fascinating tastings.

All roads lead to the main town square, Piazza del Comune, where there is the town palace (1270) with the Loggia, the former church of San Filippo Neri (XVIII century) and the oratory of Santa Maria (XIII century).

The former church of St. Francis, dating back to 1335, is home to the City Museum. It is divided into three sections: the church, which houses 12 paintings depicting the life of the saint, the Florentine artist Benozzo Gozzoli (1420-1497), the pinacotheca, and the crypt with archeological finds.

In Montefalco, St. Chiara, who was born here and lived from 1268 to 1308, is especially revered. She came from a wealthy family and was a religious person from childhood. Chiara had supernatural powers, she was always visited by visions, the most significant of which was of Christ under the weight of a crucifix, to whom Chiara asked to take his place, the answer being that she carried her cross in her heart. After Chiara’s death, an autopsy was performed and they found a heart the size of a child’s head, with symbols on it – a crucifix, a twine, a pole, a crown of thorns and three nails. Chiara’s gallbladder also “testified” to holiness, and they found images of three globes of equal size on it, which are symbols of the Holy Trinity. The church of St. Chiara contains relics and frescoes from the 13th century.

The Gothic church of St. Augustine, built between 1279 and 1285, has a fresco by Ambrogio Lorenzetti.

From the city gate of Camiano (XIII century) there is a splendid panorama of the Spoletina valley, not without reason, Montefalco is called the terrace of Umbria. Next to the gate of Frederick II or St. Bartolomeo, the church of the same name, decorated with vines and bunches, hints that Montefalco is a famous wine center.