Mexico – the land of the Indians

There is hardly a country on earth more mysterious and ancient than Mexico. Until the Spanish conquest of the land, it was home to many Indian tribes. All of them left a rich heritage of temples, pyramids, stone colossi, unresolved bas-reliefs and frescoes.

But the Maya are the calling card of Mexico . Traces of a highly developed culture, which supposedly appeared more than 3 thousand years ago, still amazes with the development of science, astronomy, the technology of construction of buildings, richly decorated with images of fantastic animals.

Despite the desire of the Spanish conquistadors to erase the culture of the Indians to the present day has reached a huge number of artifacts, which attracts tourists from all over the world.

So where do you start on your travels in Mexico?

The capital of Mexico is a bright, bustling and colorful metropolis, populated by a huge variety of ethnic composition – Mexico City has more than 20 million people. Thanks to its multicultural makeup, the city delights by its exotic culture and diverse architecture. The Catholic Cathedral in the capital, the Frida Kahlo Museum, the National Anthropological Museum of Mexico City is a very modest list of things you can visit there. 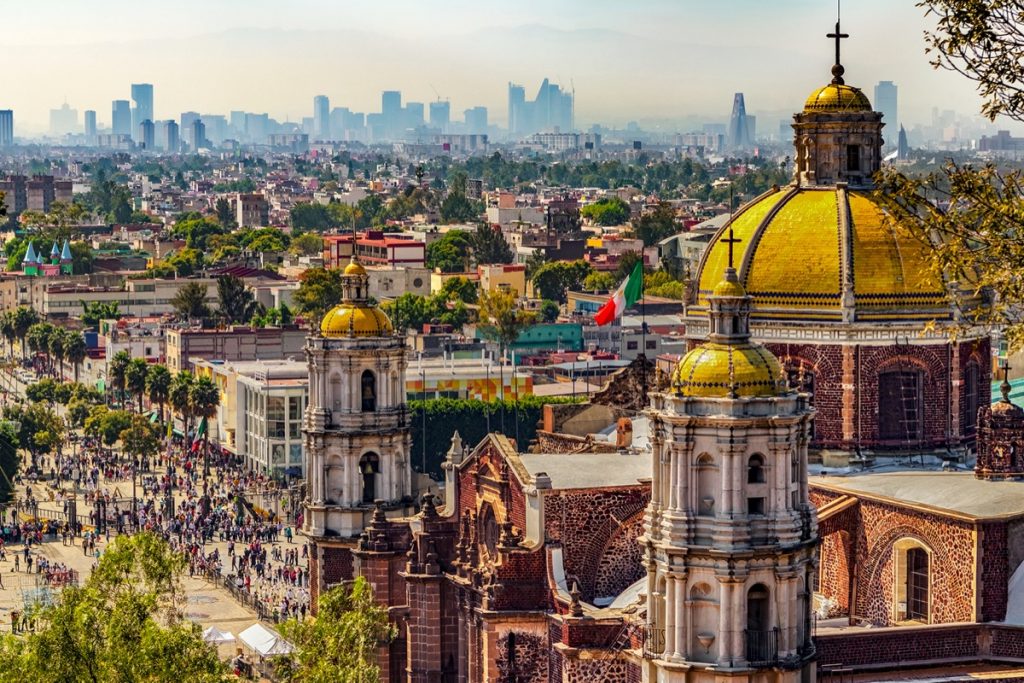 Beautiful squares and streets, colorful houses and Catholic cathedrals, fountains and squares, carnival atmosphere – all this in itself attracts tourists. But if you go 50 kilometers from Mexico City you will find the true treasure of Mexico – the temple complex of Teotihuacan occupying an area of 20 square kilometers.

The name of Teotihuacan translates as “birthplace of the gods,” and is the oldest city in the country. It is a museum complex, consisting of palaces and pyramidal buildings. There are megalithic pyramids in Teotihuacan – the Temple of the Sun and the Temple of the Moon. On top of them are equipped with platforms from which the ancient Maya were astronomical observations, and sent religious rituals. Pyramid of the Sun – the third highest on the globe. From the foot of the pyramids stretches a road called the Road of the Dead, a length of 3 kilometers, built with extraordinary mathematical precision. In the center, surrounded by the pyramids is a square called the Citadel. 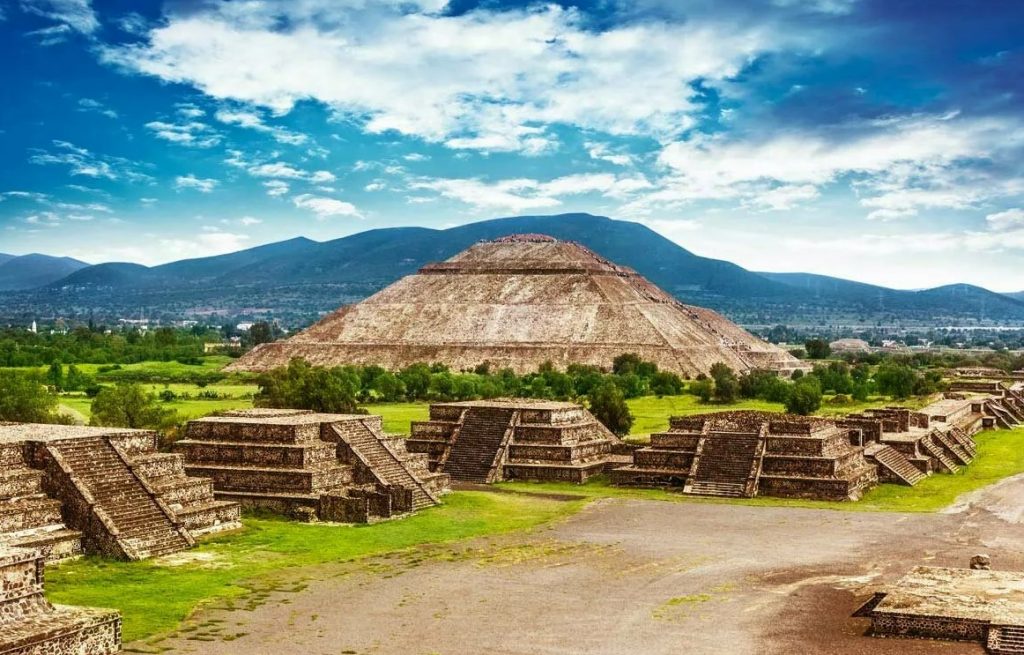 The city is undergoing archaeological excavations, and historic discoveries are made periodically. In the scientific community is still arguing about the age of the pyramids and the actual city – there are versions that Teotihuacan is much older than officially considered.

In the Yucatan, northern Mexico, is located another antiquity of the Mayan culture – the city of Chichen Itza. The attraction of the city is the pyramid of the god Kukulcan, a feathered serpent. The purpose of this site was to hold rituals, worshiping the Mayan deities. There are also some impressive archeological sites: the Warriors Temple, Temple of the Jaguars, the Stadium, and the Observatory, which were built more than 3,000 years ago. The carved stelae, snake heads, stone carvings, statues, and frescoes will keep you fascinated and amazed as you wander through the ancient plazas. 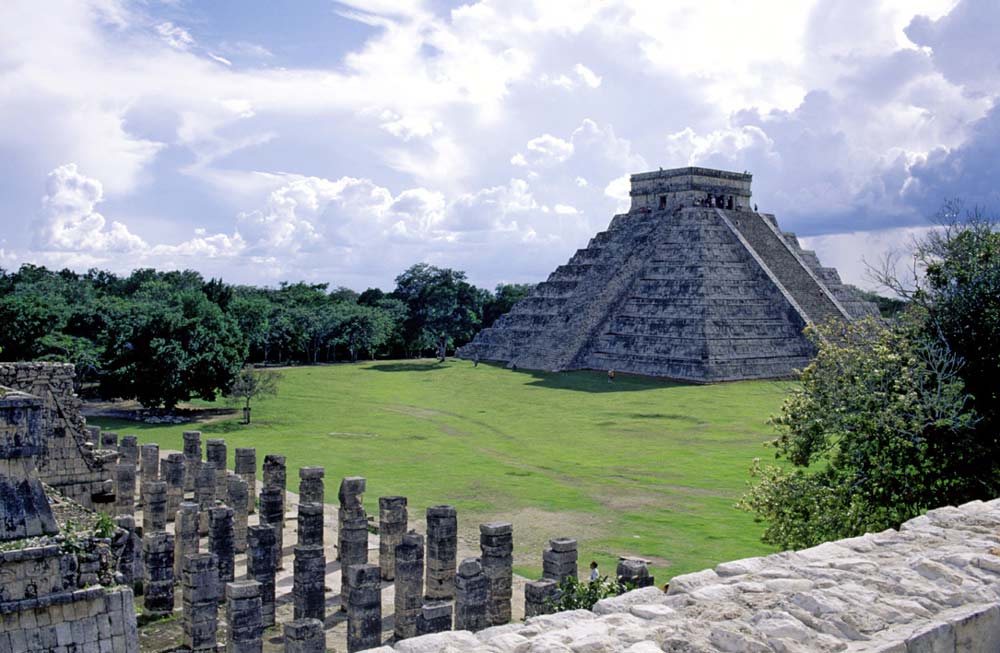 The former Mayan fishing village has grown into the magnificent resort of Cancun. Its white sandy shores bathed by the Caribbean Sea welcome millions of tourists every year. Cancun is one of the most beautiful resorts in the world and is perfect for relaxing after long tours through the ancient cities of Mexico. It will offer its guests amazing entertainment.

Underwater Sculpture Museum is an exhibition of works by English sculptor Jason de Caires Taylor. More than 500 sculptures represent different eras and ethnicities. You can see this grand underwater exhibit by scuba diving or from a boat with a transparent floor. 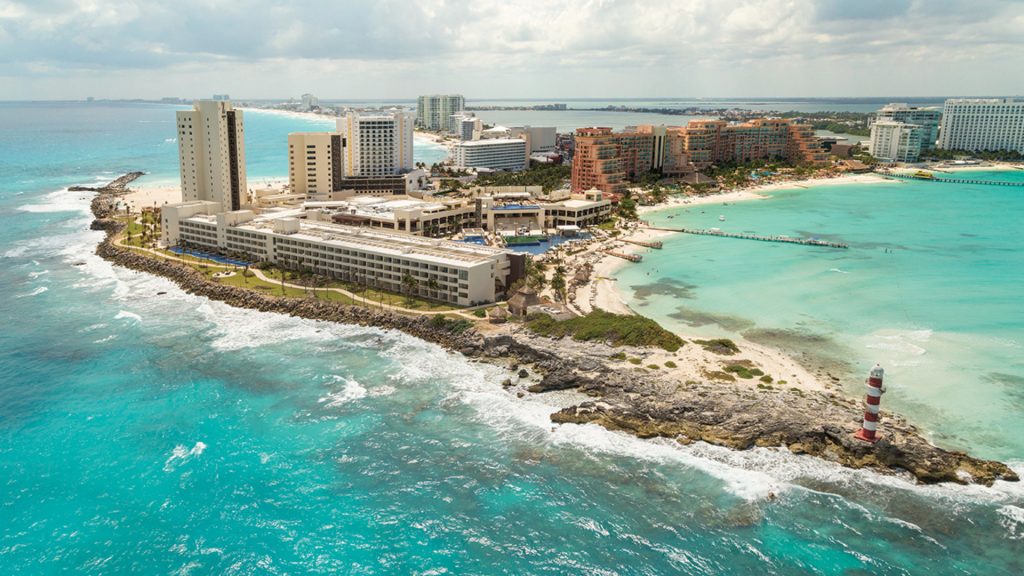 Iscaret Park immerses the traveler in the rainforests of Mexico . In the protected bushes fluttering bright butterflies, singing and whistling exotic birds, and there is a zoo in the form of an island with predatory animals. Tourists can wander through long and winding stone tunnels, enjoy a river walk along an underground river through caves, dive the coral reef, and attend an unforgettable night show where real, authentic Mayans will hold rituals spinning in frantic dance, amaze viewers with magnificent ethnic costumes and battle paint.

READ
Apia, a paradise in the middle of the Pacific Ocean

The natural lagoon Shel-Ha is famous for the crystal clear water of the Caribbean Sea, with grottoes, underground caves and wells. Tourists can swim with dolphins, mantas, and manatees with or without equipment, test themselves by jumping off the high rock of the Bold, visit various attractions, and go boating.

In northwest Mexico, there is a chain of 7 canyons, the copper-red color of the walls of which gave its name to this national park. Here, far from civilization, hot springs gush from the ground and sparkling waterfalls flow from the rocks. Since the terrain is mountainous with great elevation differences, nature in this region is very diverse – you can see coniferous forest with pines and oaks in the upper zones and tropical forest with palms and figs on the descent to the canyons. It is a true natural oasis of North America, with hiking, river walks, and rock climbing activities offered to hikers. 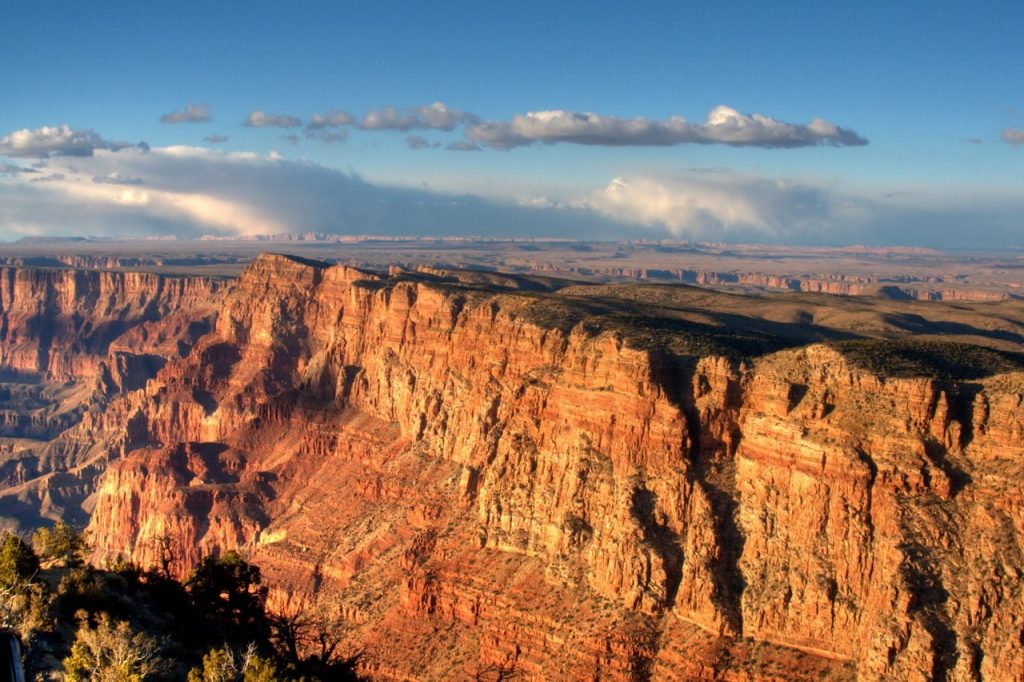 We could go on and on about the ancient Indian country which included the Mayans, the Olmecs, the Zapotecs, the Aztecs, and this is just a small part of the cultures that populated this beautiful country in ancient times. You can understand and feel the depth of the North American history if you visit Mexico, mysterious and bright, with its white sands and blue sea.

What are the origins of the Mexicans and why are they so fascinated by the Russians?

Mexicans are one of the largest and most famous peoples of Latin America. At the same time combine a lot of the most diverse ethnicities.

Let’s find out on the Ethnobase channel, from what ethnic groups modern Mexicans originated. Why they are so eagerly trying to move into the neighboring United States. And also find out why Mexicans are so fascinated by the Russians now.

Add a description So, Mexicans. This 150-million-strong nation, the 3rd largest in America after the U.S. proper and Brazilians, is now mostly Spanish-speaking.

The mariachi are a traditional Mexican folk band.

Although Mexicans do not consider themselves Spaniards at all. And many, especially those living in rural areas, have preserved the indigenous traditions and languages of their Indian ancestors in their everyday lives. For example, Nahuatl, the language of the famous Aztecs. Or the Mayan languages of the Yucatan Peninsula.

By the way, it is from the Nahuatl language, according to one version, that the name of the country came. There is an opinion that in Aztec the word Mexico means “the place in the center of the moon”. The famous Aztec capital of Tenochtitlan, which stood on stilts and islands in the middle of Lake Texcoco, was originally named thus allegorically.

Tenochtitlan – the ancient capital of Mexico

Mexicans began to form as a single ethnic group after the Spanish conquistadors conquered the territory of modern Mexico in the 1520s. At that time many settlers from the Iberian Peninsula arrived in the new overseas colonies of Spain, who married local Indian ladies.

The Mexican nation was born in a far from always peaceful amalgamation of Indians and Spaniards. In the sixteenth century alone, some 240,000 Spaniards arrived in Mexico. And over 400 thousand – in the XVII-th. They, mingling with the Indians, gave rise to the Mexican nation.

Typically, most Mexicans today are quite tan. But they have Southern European facial features.

Today Mexicans can be roughly divided into three large groups. The 1st is the Gueros or Blancos, direct descendants of Europeans (20% of the population). Mostly Spaniards. But there are also Mexicans with Irish, Italian, French, German, Jewish and even Russian blood.

Victoria Rufo – Just Maria. One of our most famous Mexican women 2nd are descendants of Indians.

Indian blood runs in the veins of practical all Mexicans in one way or another. But there are also pure Indians, descendants of the Aztecs, Mixtecs, Zapotecs and other pre-Columbian peoples.

And the 3rd group of Mexicans is everyone else, from Afro-Mexicans to Mexican Indian roots (there are those too).

All in all, Mexicans are such a racial cocktail of Indians, Europeans, and a little African-Asian blood.

And who doesn’t remember the Wild Rose – Veronica Castro?

Why are Mexicans fleeing to the United States?

Indeed, quite a few Mexicans try by hook or by crook to come to the United States. But mostly they are unskilled and illiterate manual laborers who cannot find a place in the sun in their homeland.

The U.S. has much higher wages, a higher standard of living, less corruption, and most importantly, much safer than Mexico. Every Mexican already has family or friends there. And you don’t have to learn English – Spanish is the second official language in the USA.

That’s why there are about 30 million Mexicans (up to 12% of the total American population) living in the United States today. No border wall, no matter how high it is, can protect the USA from an influx of Mexicans.

However, not everyone goes to the neighboring country for good – Mexicans keep an excellent connection with their homeland, transfer money there, and many expect to return home one day.

Why do Mexicans respect Russians so much?

Mexicans have always had and continue to have a great respect for Russians. As they explain themselves, for our mental similarities with them. For example, the focus on family values.

Yes, Russians and Mexicans still have the custom that grandmothers take care of children, children help parents, and do not put the elderly in nursing homes, and husbands take care of wives. Therefore, Mexicans see Russians as almost themselves, separating Russians from Americans and Western Europeans.

Mexican fans at the 2018 soccer championship in Russia.

Mexicans also like the Russian propensity for education, for reading books. This is something Mexicans simply admire.

Also, for some reason, Russians in Mexico are always considered to be exceptionally slim people who do not suffer from excess weight. It is believed this is because Russians eat less fast food, less fatty and sugary floury foods.