Lyon – the city of France, the historical part of which is included in the list of UNESCO

Lyon (France) – the most detailed information about the city with photos. The main attractions of Lyon with descriptions, travel guides and maps.

Lyon is a city in eastern France and the capital of the Auvergne – Rhône – Alpes region. It is the third largest city in the country and the second most important after Paris. Lyon does not often get on tourist routes, though it has a rich history going back to the time of ancient Rome. The city has maintained a magnificent historic core that is a UNESCO site and includes the oldest ancient ruins in France, charming medieval streets, atmospheric neighborhoods along the Saône and Rhône rivers, and beautiful Renaissance houses. Lyon is known for its gastronomy, cultural life and as the birthplace of the cinema. It was here that the Lumière brothers started the production of their cinematographs.

Things to do (Lyon): 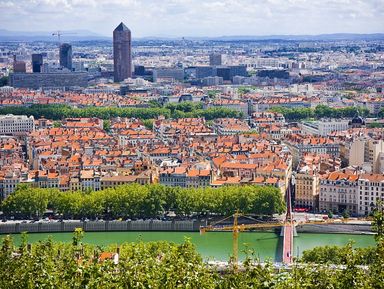 Lyon through the ages: guided walk 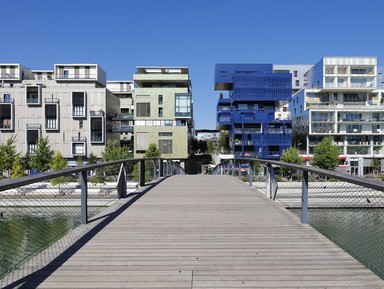 Lyon from Gallo-Roman to futuristic Confluence

A great sightseeing tour with an easy immersion in the history and culture of this multifaceted city.

Lyon is located in southeastern France at the confluence of the Rhone and Saône rivers about 400 km from Paris. The city lies in the Rhône lowlands and is surrounded by orchards and vineyards. To the west the Central Massif and to the east the Alps are situated. The climate is temperate continental with some Mediterranean influences. Winter is cool, with cold winds and a minimum of snow cover. Summers are dry, hot and sunny. 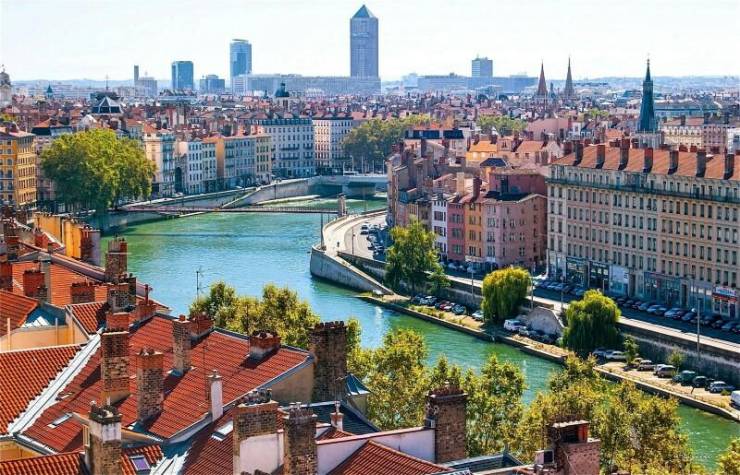 Lyon is one of the oldest cities in France. Already between the 3rd and 1st centuries, the Gallic tribe of the Segusiaves established a place of trade at the confluence of the Rhone and Saône rivers. Later on the hill of Fourvière, the fortress of Lugdun sprang up. In 43 BC, the settlement was seized by the Romans and became a Roman colony. The Romans greatly expanded and rebuilt Lugdun. The settlement was of major commercial and military importance. Many Roman emperors visited here and Claudius and Caracalla were born. 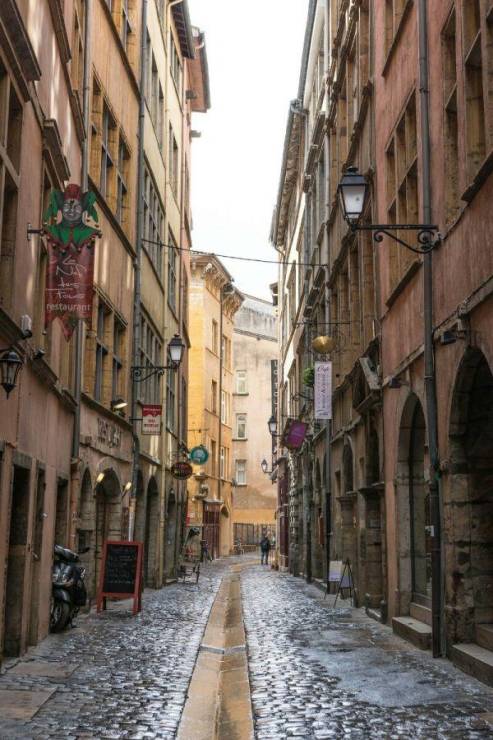 The streets of Lyon

Under the Romans, ancient Lyon flourished and was actually the capital of Gaul. Its highest period of prosperity was in the 1st and 2nd century AD. Among the many Roman buildings have survived the theater, the Odeon, the amphitheater, the aqueducts and thermae. At the end of the 2nd century AD, after the battle between Septimius Severus and Clodius Albinus, the city was sacked and burned. After that Lugdun fell into decline. 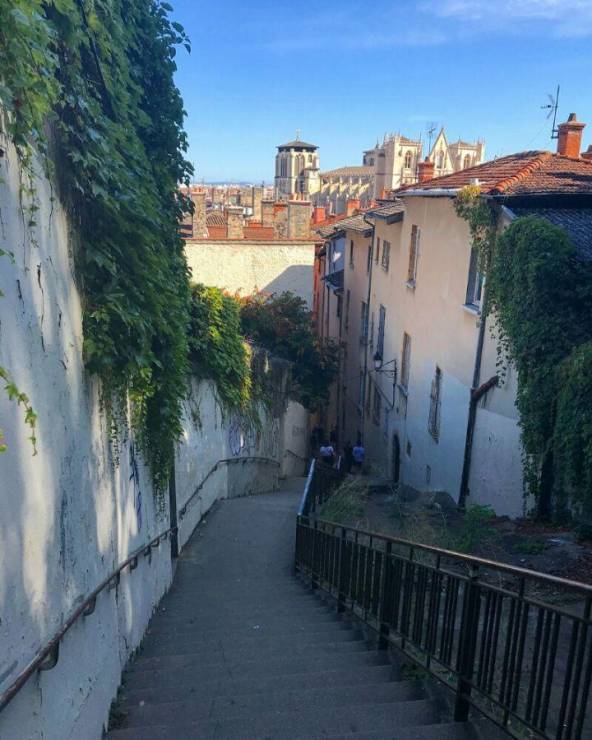 In the 5th century Lyon was no longer the capital of Gaul and was captured by the Burgundians. In the first half of the 6th century the city came under the control of the Franks. However, in the 6th-7th century it experienced constant raids and pillage. Lyon began to flourish again during the reign of Charlemagne. After the collapse of the Frankish empire, power over the city goes to the church. In the 12th century, Lyon was divided between Germany and France along the Saône River.

Two significant religious events took place in Lyon in the 13th century, the Councils of Lyon. One of them even attempted unification with the Orthodox Church. At the beginning of the 14th century Lyon was annexed to the French kingdom, which was the end of the power of the archbishops. In the 15th and 16th centuries, the city prospered thanks to trade. In 1563 and 1574, a plague raged in Lyon, claiming the lives of a third of the city’s inhabitants. 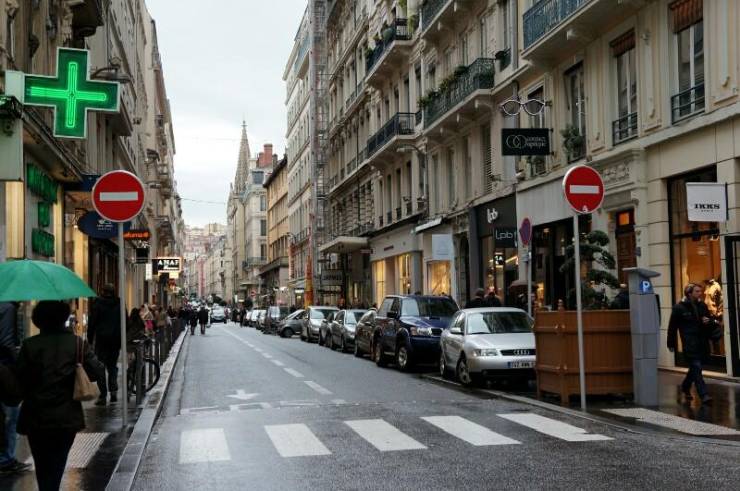 The streets of Lyon

During the French Revolution, Lyon sided with the opponents of the Convent. The townspeople rose up against the Jacobins and overthrew their dictatorship. The Convent then declared the city an enemy of the revolution. General Kellerman’s army laid siege to Lyon, and after a brutal two-month siege it was taken. On October 12, 1793, it was decided to destroy it. The Jacobins practically destroyed the old city and killed half the population. Lyon only began to revive during the reign of Napoleon. 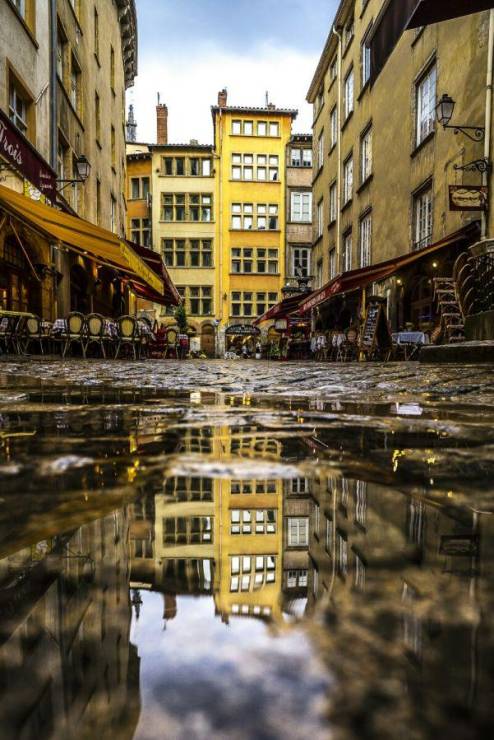 The old town of Lyon is its main attraction. It has more than 2,000 years of history and is a UNESCO World Heritage Site. Despite the scars left on the “face of the city” by the French Revolution, Lyon has preserved its unique monuments from the ancient, Middle Ages and modern times.

Lyon’s oldest site is the Fourvière Hill, where a Gallic settlement and a Roman city were founded. Later the city grew from east to west, occupying two more hills and the confluence of the Rhone and Sonne. The four historic districts cover an area of 500 hectares and will literally take you back in time to Lyon. 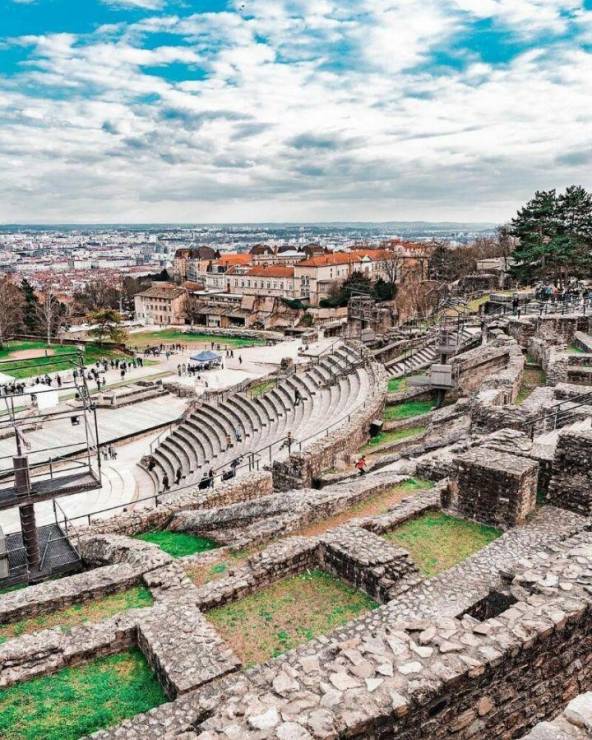 On the Fourvière Hill the ruins of Lugdun, the capital of Roman Gaul, can be discovered. Two ancient theaters are a reminder of the city’s greatness and prosperity. The Great Theater was built in the 1st century BC and expanded in the 1st century AD. The theater could seat 10,000 spectators. Nearby is a small odeon, which the Romans used for concerts and public readings. Nearby there is also an archaeological museum, where all the ancient discoveries and finds are kept. 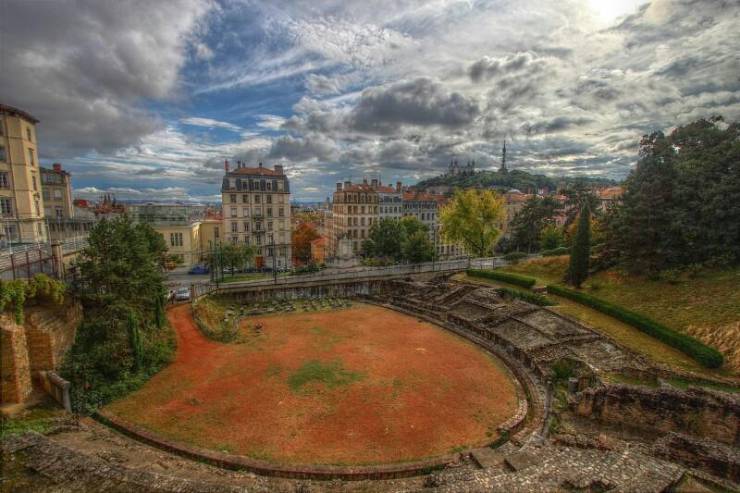 Amphitheatre of the Three Gauls

The amphitheater of the Three Gauls was built in 19 AD outside the Roman city and was enlarged on Hadrian’s orders. This structure was used for gladiatorial games. Also once a year representatives of the Gauls gathered here and swore an oath of allegiance to Rome. The amphitheater was discovered in the 19th century. 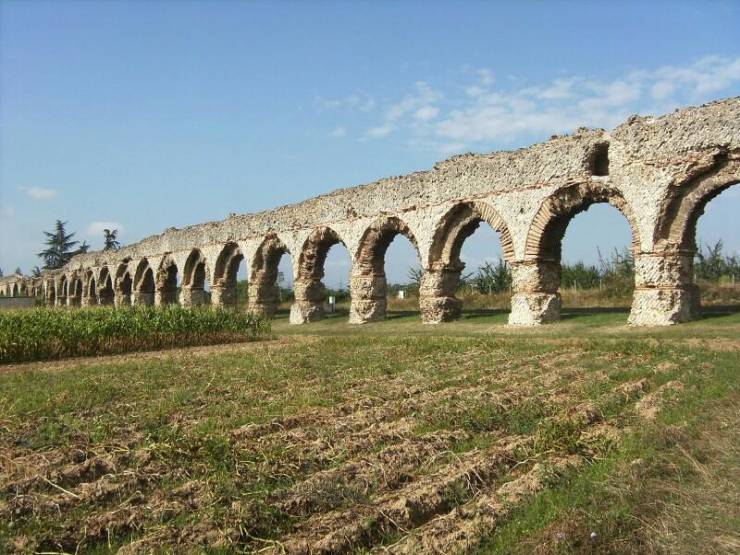 Ancient Lugdun was fed by four aqueducts. They brought clean water to the city from the nearby mountain ranges and were several tens of kilometers long. 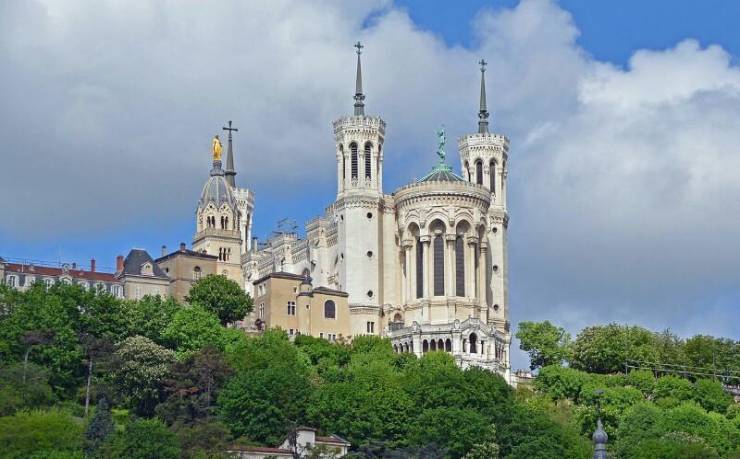 Notre-Dame de Fourvière Basilica is one of the main attractions of Lyon and is located on the top of the hill of the same name over the Saône. This stunning eclectic basilica was built in the 19th century after the Franco-Prussian War, when Lyons residents vowed to create a church dedicated to the Virgin Mary if the city was spared. The building is a mix of Gothic and Byzantine styles with an ornate interior. It is also worth climbing up here for the beautiful panorama of Lyon. 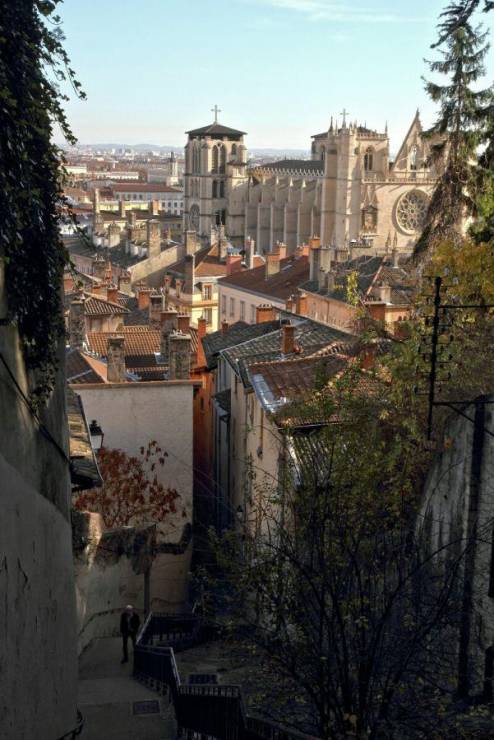 Between the Fourvière Hill and the Saône lies Old Lyon with its charming Renaissance alleyways. These narrow streets with merchant houses from the 15th and 16th centuries retain the atmosphere of the time when Lyon was a fair city. 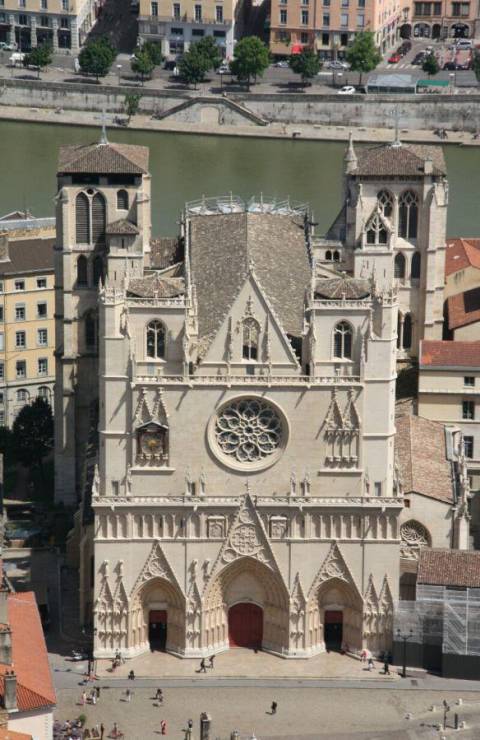 Saint-Jean Batiste Cathedral is a magnificent medieval Romanesque cathedral with a French Gothic facade. It was built in the 12th century and is known for its beautiful stained glass windows from the 13th to 14th centuries. The rose window on the facade dates from the late 14th century and the astronomical clock from the 16th century. 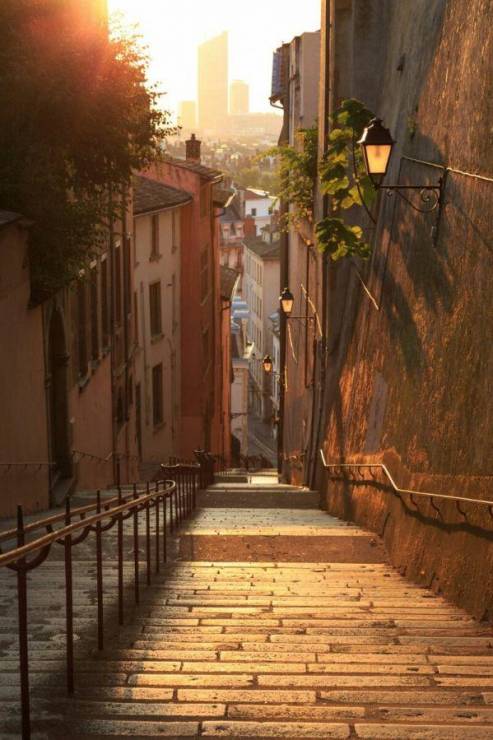 The medieval quarters around Saint-Jean Cathedral are among the most charming in Old Lyon. North of the church are full of charming narrow cobblestone streets and quiet little courtyards. The picturesque Place Neuve Saint-Jean is full of traditional restaurants. There are also several interesting museums in the area: the city’s history museum, the museum of cinema and miniatures, and the doll museum. 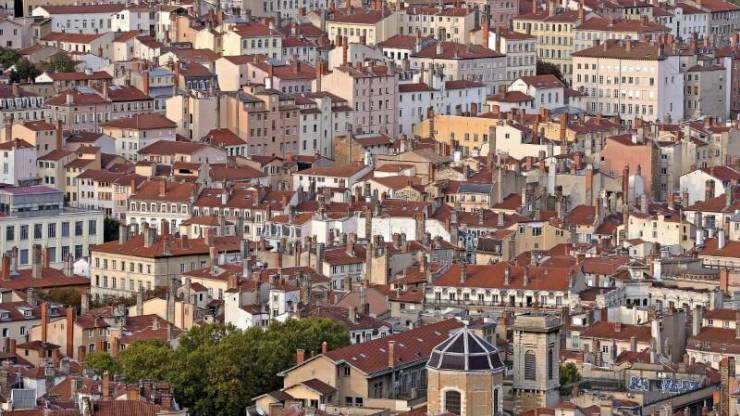 The area of weavers

On the slopes of the Croix-Rousse hill is the historic district of weavers, which was the center of the textile industry in the 19th century. It is one of the most beautiful places in Lyon with many narrow sloping streets and charming curving staircases. 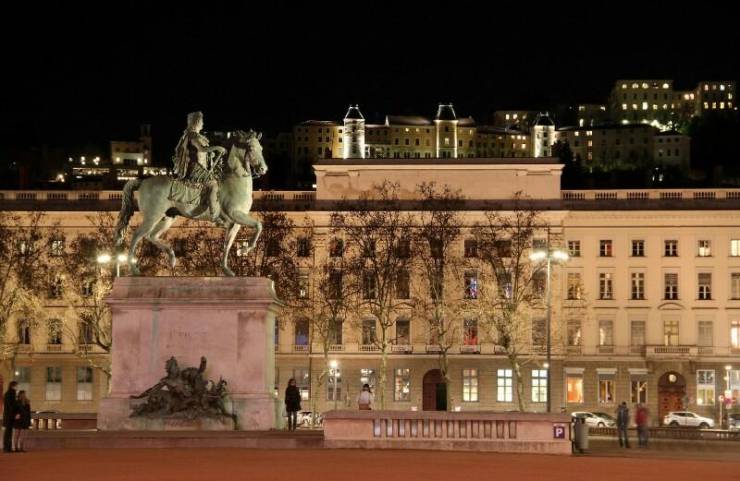 The Presqu’ile district is characterized by beautiful architecture and monumental city squares. Here you can see many majestic Baroque and Renaissance buildings. In front of the Town Hall is the grandiose Bartholdi Fountain. The central square of the area is Bellecourt Square, surrounded by elegant 19th century buildings. In the center of the square is an equestrian statue of Louis XIV. 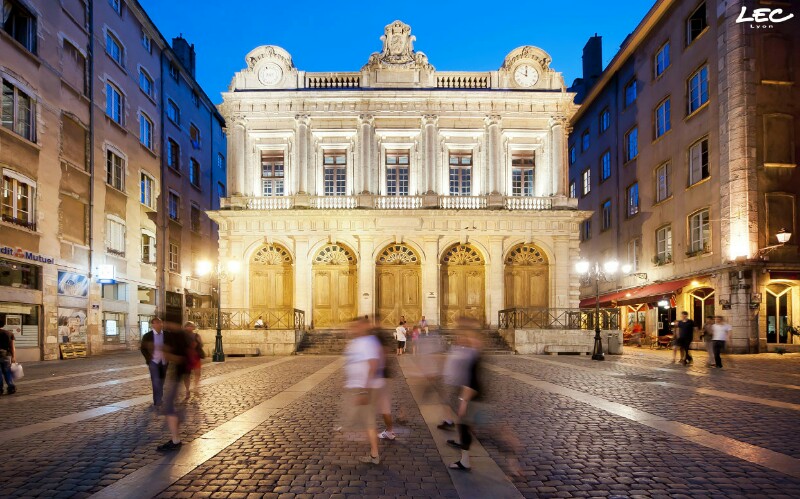 The Temple of Changes

The Temple of Changes is a historic 18th-century building designed by architect Jean-Baptiste Roche. It was used by Lyon merchants as a stock exchange. The building was abandoned after the revolution. 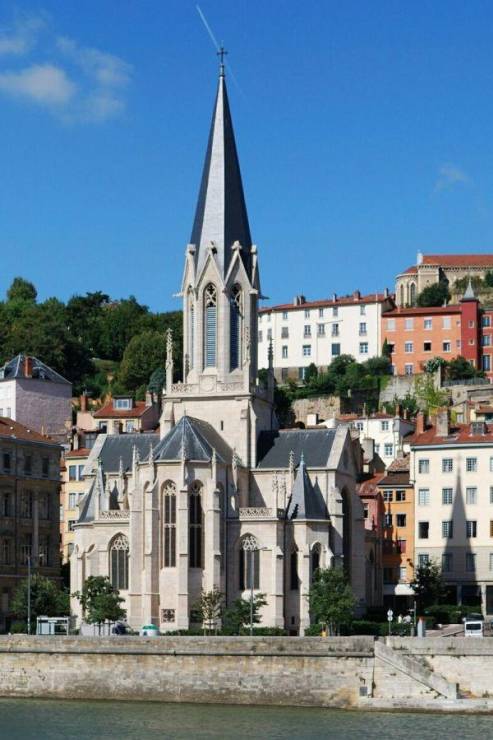 The Church of Saint George is a 19th-century neo-Gothic church on the banks of the Saône. It was built by architect Pierre Bossan and is a historical monument. 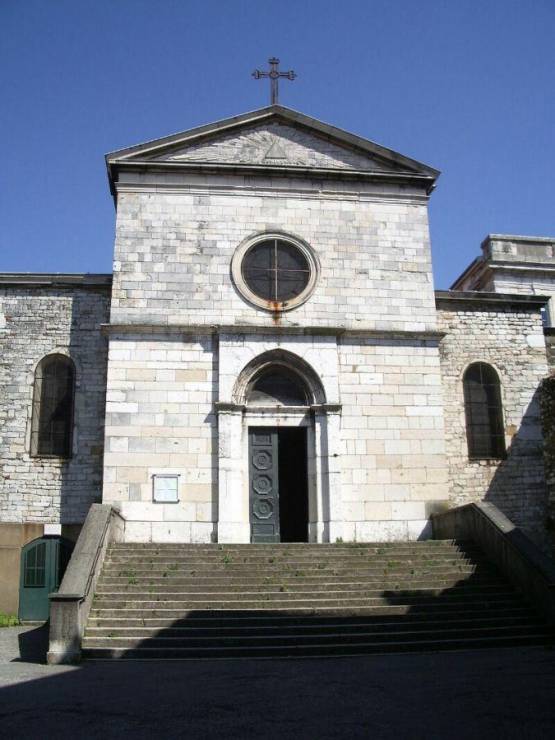 The Church of Saint Irenea is a 19th century neo-classical church built on the site of an older religious structure from the Carolingian period. Inside the walls of the church are preserved ancient stone sarcophagi from the Roman necropolis. 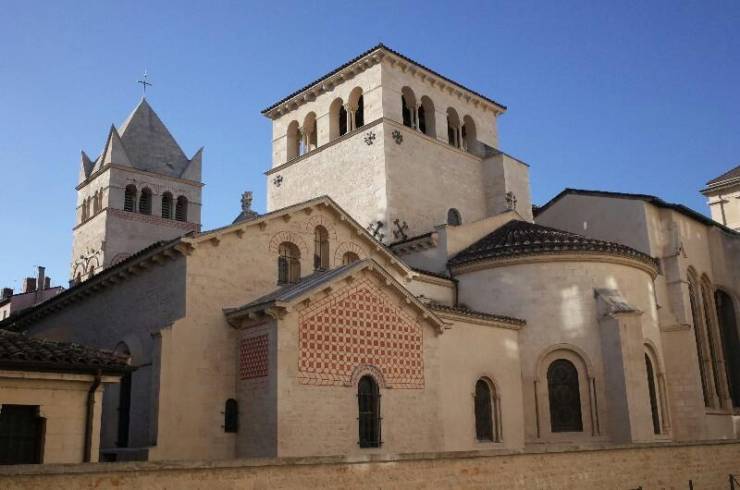 The Church of St. Martin is the only entirely Romanesque church in Lyon, dating from the late 11th century. It was built on the site of an ancient church from the Carolingian period (9th century). From the 13th century, the church was part of the abbey of the same name, which was closed after the Huguenot wars. The church was badly damaged during the French Revolution and was in danger of being destroyed in the 19th century, but fortunately it was saved and reconstructed. 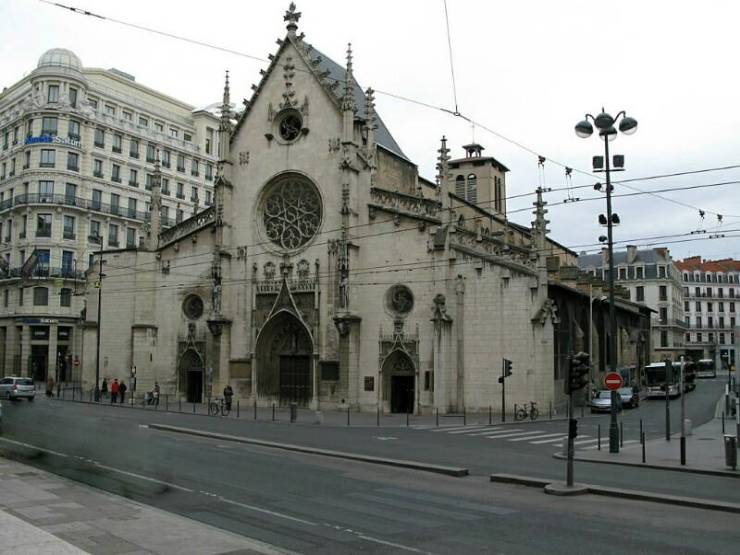 The Church of St. Bonaventure is an ancient church in the French Gothic style. It was founded in 1220, rebuilt in the 14th century and at the end of the 15th century. The church has the most beautiful organ in Lyon and old tapestries dedicated to Aubusson. 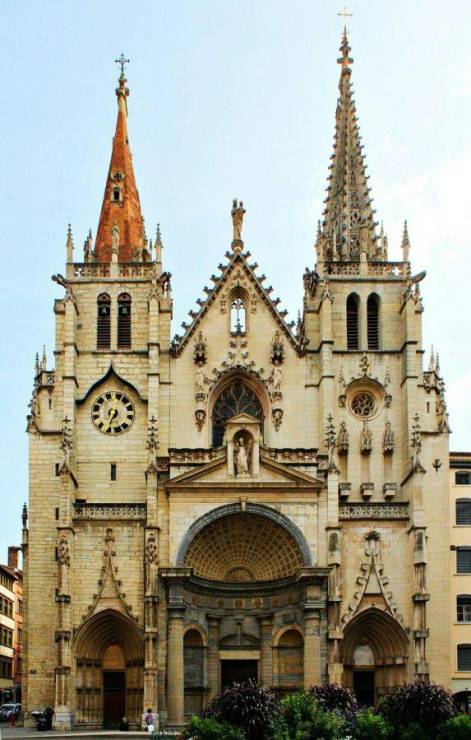 The Church of St. Nisier is one of the oldest religious buildings in Lyon. The first church on this site was built in the 6th century. Although as early as the 2nd century, the first Christians gathered here. The building was rebuilt in Gothic style between the 14th and 15th centuries.

Immerse yourself in the fate of the ancient city and the stories of the Gauls, Templars and kings on a guided tour-quest