I have previously written about Switzerland, but I have not covered some noteworthy cities in my articles. Today’s post will be about Lucerne, one of the most picturesque cities in the country.

Because of its location in central Switzerland on the shores of Lake Lucerne, surrounded by the Swiss Alps, Lucerne has long attracted thousands of tourists from all over the world. 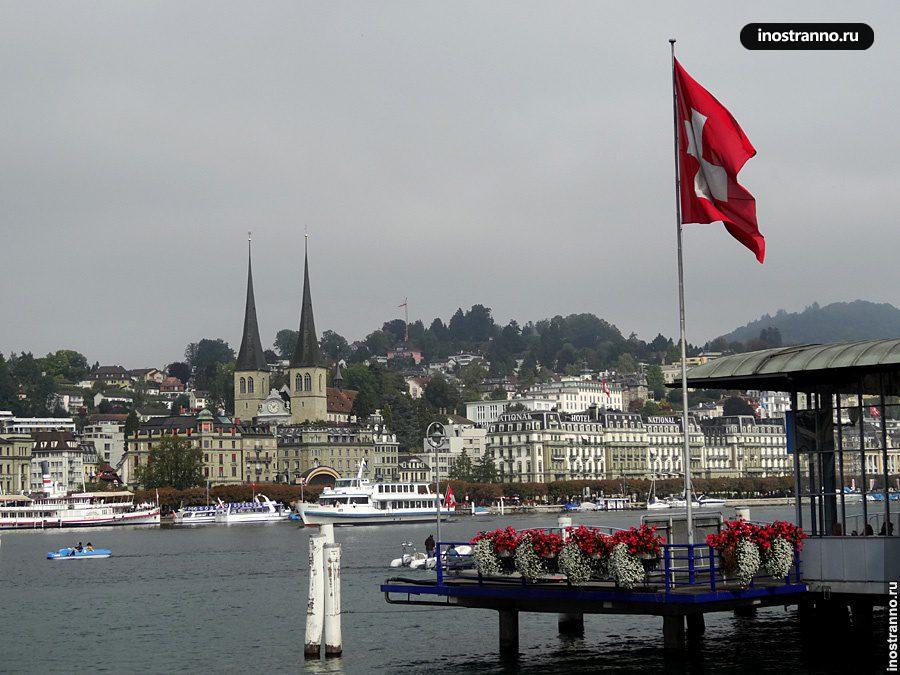 Lucerne’s main attraction and symbol is the wooden Clockwork Bridge (Kapellbrücke). This is the oldest covered bridge in Europe, built in 1333. The bridge is 204 meters long. Under the roof of the bridge you can see 158 triangular paintings, telling the most important moments of Swiss history. In the middle of the bridge is the octagonal brick water tower Wasserturm, built in 1300. It used to be a torture and watchtower, and now sells souvenirs in the tower. In 1993 the bridge was badly damaged by fire, but a year later it was restored. In the warmer months the whole bridge is decorated with red flowers. 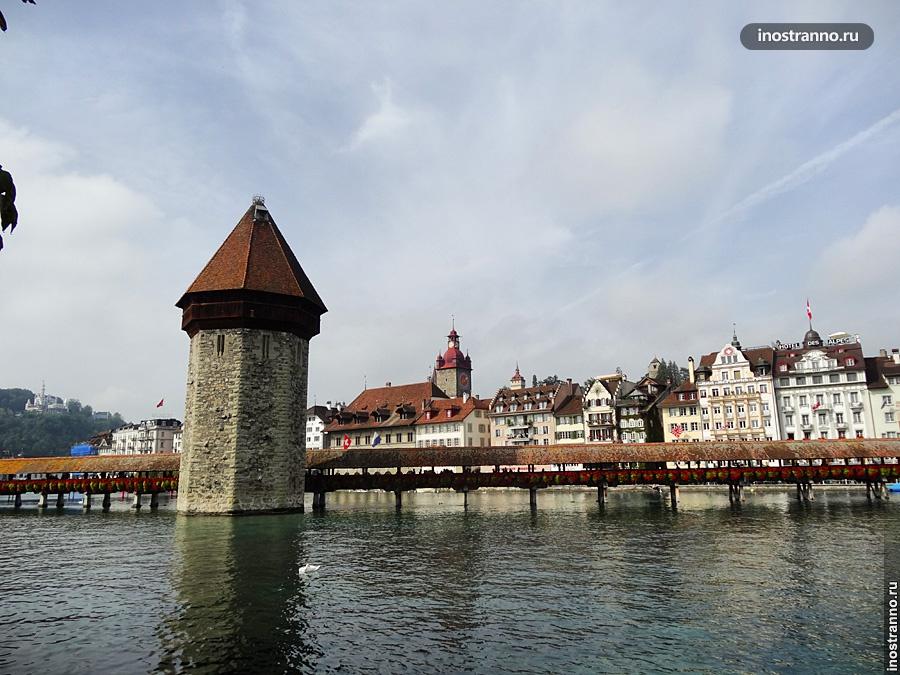 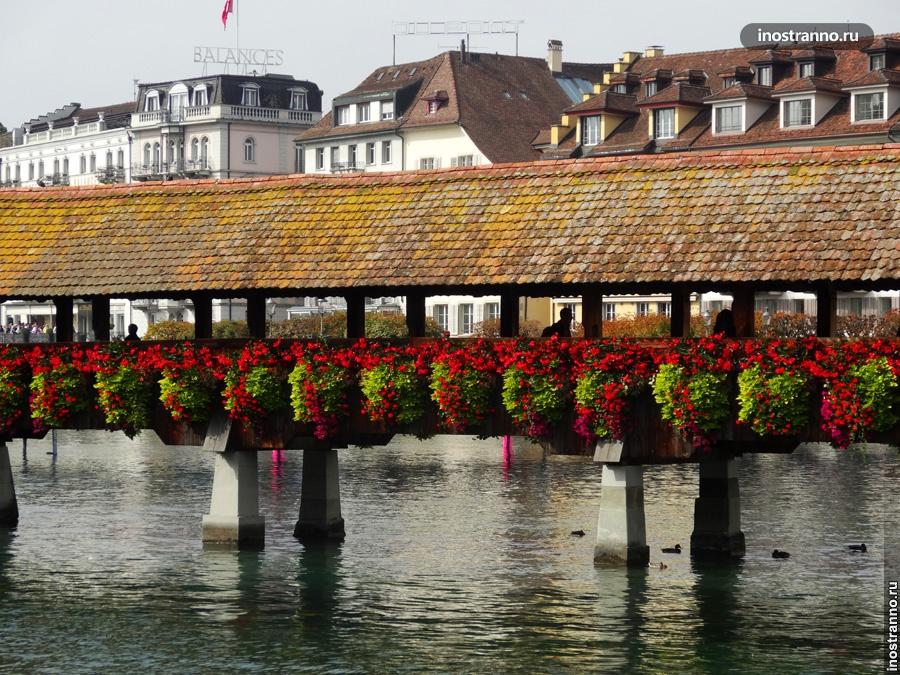 In general, Lucerne is unique in that it had three wooden bridges, which were decorated with triangular paintings. In the photo you see the second bridge Spreuerbrücke, which was built in 1408. 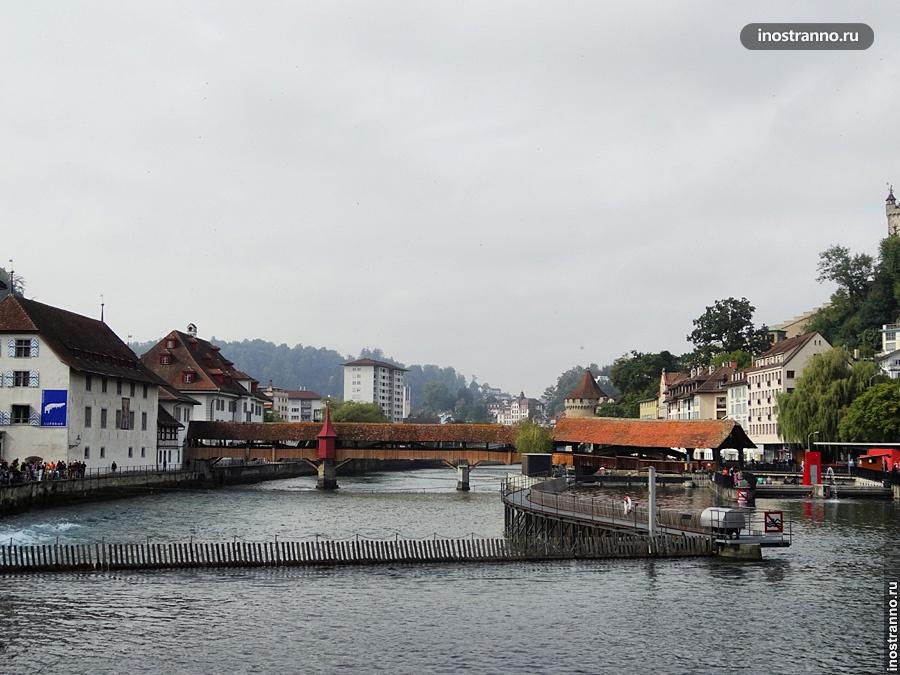 Another landmark of the city is the Dying Lion. The sculpture commemorates the valor of the Swiss Guard, who fell while resisting the storming of the Tuileries Palace and guarding Louis XVI on the day of the August 10, 1792 rebellion during the Great French Revolution. This sculpture is a high relief in the ledge of a cliff. On the bas-relief you can see the inscription HELVETIORUM FIDEI AC VIRTUTI “Dedicated to the loyalty and bravery of the Swiss”.

In contrast to the buzzy Geneva, nervous Zurich, small Interlaken, Lucerne – it’s the ideal city for leisurely walks, for living, for pleasure, because it perfectly combines the old architecture and modern buildings, biking trails conveniently spaced between roads for cars, walkways and embankments. And the clearest mountain lake adds a special charm and splendor to the city. 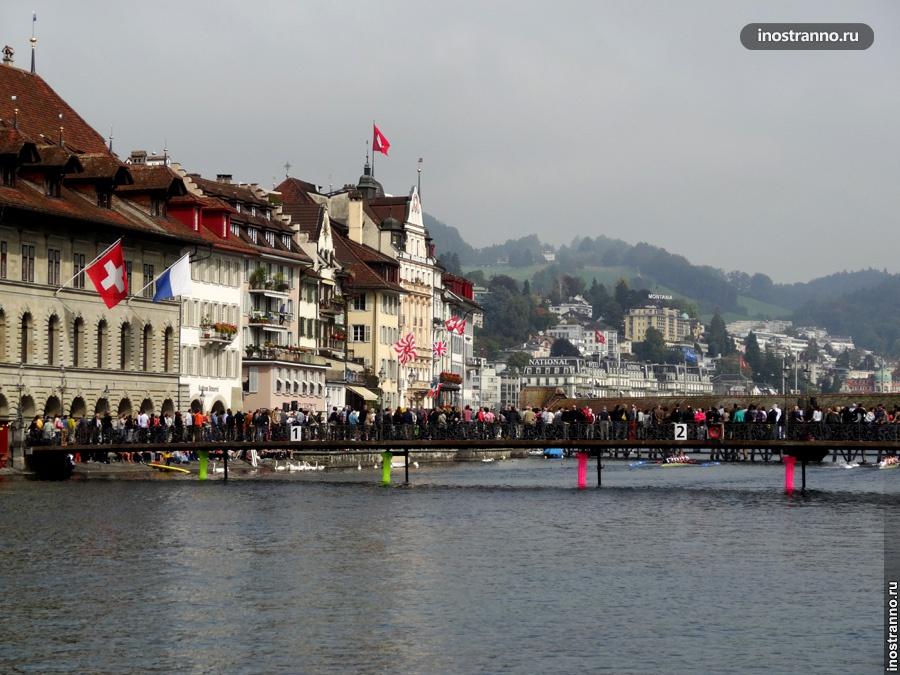 In Lucerne developed a system of public trolley buses, which operates since 1941. Until 1961 the city used streetcars, but it was decided to no longer operate them. The trolleybus network currently consists of 6 routes with the length of 38 km. The annual passenger traffic is more than 25 million people. The population of Lucerne is only 80,000. In addition to the environmentally friendly trolleybuses, many locals ride bicycles in the city, thanks to the many bicycle lanes. 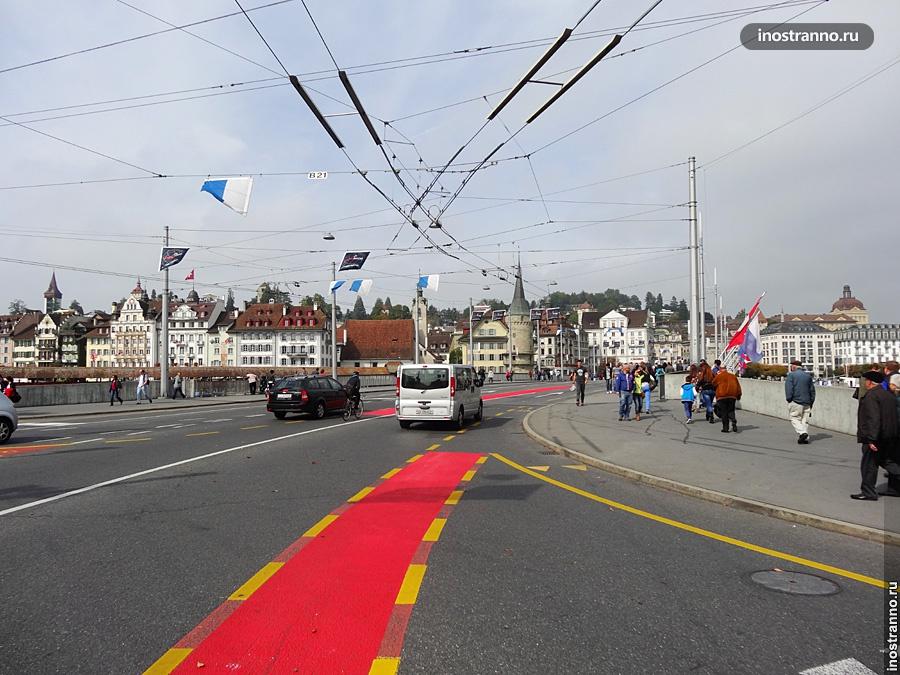 The official name of the lake on which the city stands is Lake Lucerne, although it is usually called Lake Lucerne. It is the fourth largest lake in Switzerland, 30 km long and 20 km wide. The lake was formed by ancient glaciers, so it has a strange complex shape. But around the lake are picturesque views, such as views of the mountains Riga and Pilatus. Around the lake you can take a car ride, but most tourists prefer boat rides. In addition, walks can be made on the paddle steamers of the early twentieth century and fifteen modern ships. There are a total of 32 boat stops on the lake. The cost of boat rides varies greatly, I can recommend an hour walk on the lake, the trip costs 25 Swiss francs. 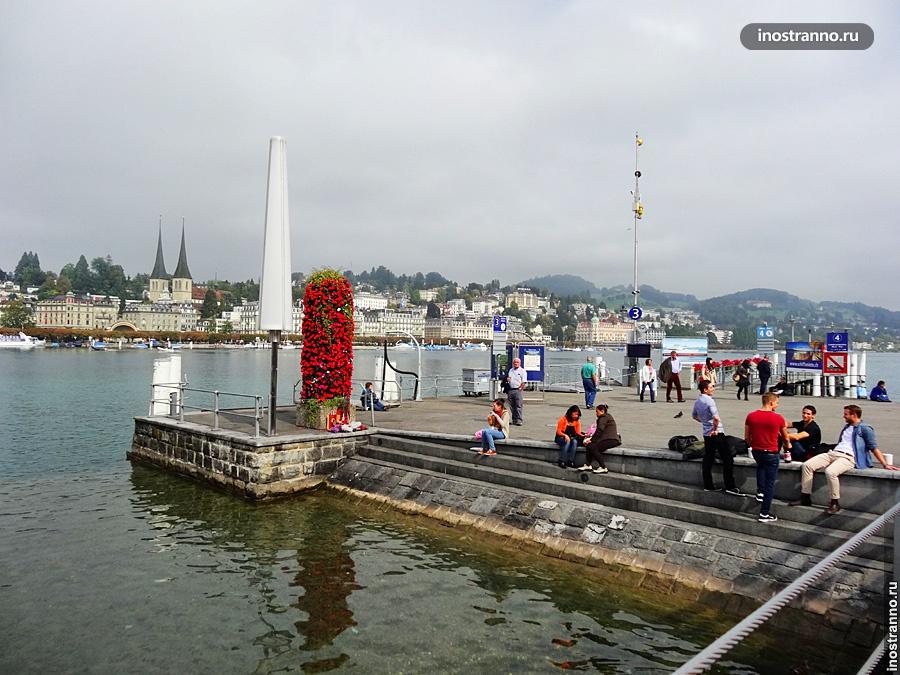 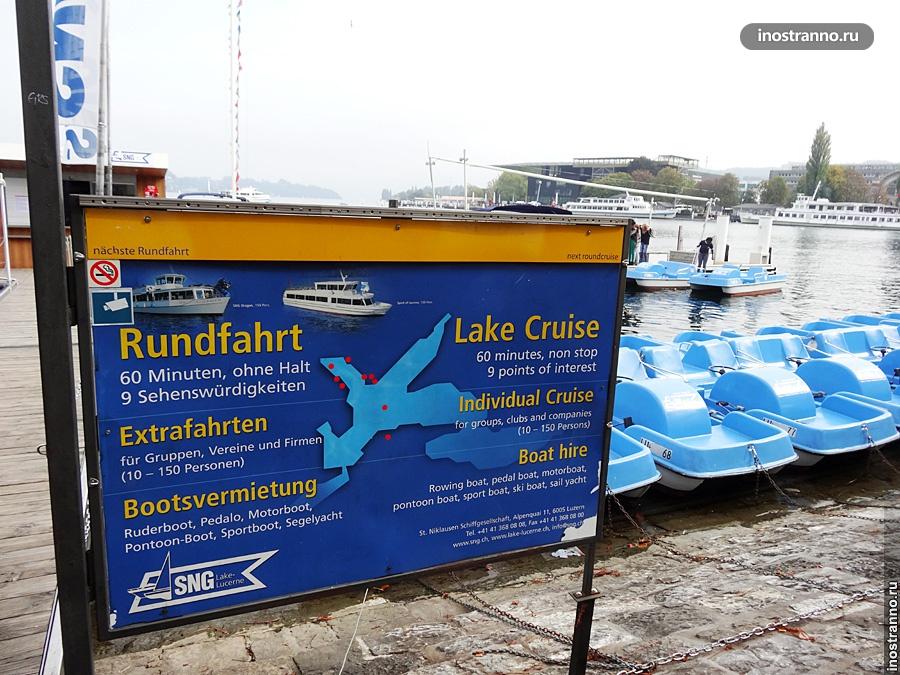 This is the main train station in Lucerne, built in 1856. The station is located in the heart of the city, right on the shore of the lake. It is convenient to get here by direct trains from Bern, Geneva, Zurich. By the way, if you like transportation, be sure to visit the Swiss Transport Museum in Lucerne. In the museum you will see 3000 exhibits – planes, trains, cars from different ages. There is a large exposition of racing cars with an interactive screen. People from all over Europe go to this museum. The entrance fee is 30 francs.

READ
South Asia in the palm of your hand: a trip to Malaysia 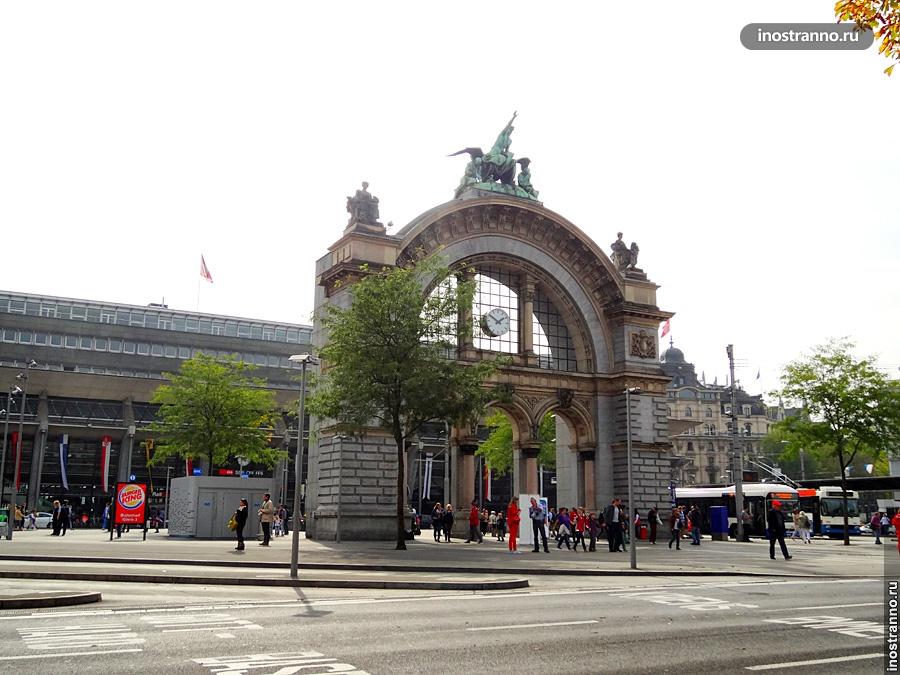 Most of the restaurants in the city center are concentrated in the Pfistergasse area on the riverfront near the Spreuerbrücke bridge and the Kornmarkt street. Here you will find Italian pizzerias, burger joints, bars, Asian, Chinese, Indian and Brazilian restaurants, etc. True, the prices in the restaurant bite, most second courses cost 20-50 francs, and the cost of a bottle of wine starts at 40 francs. 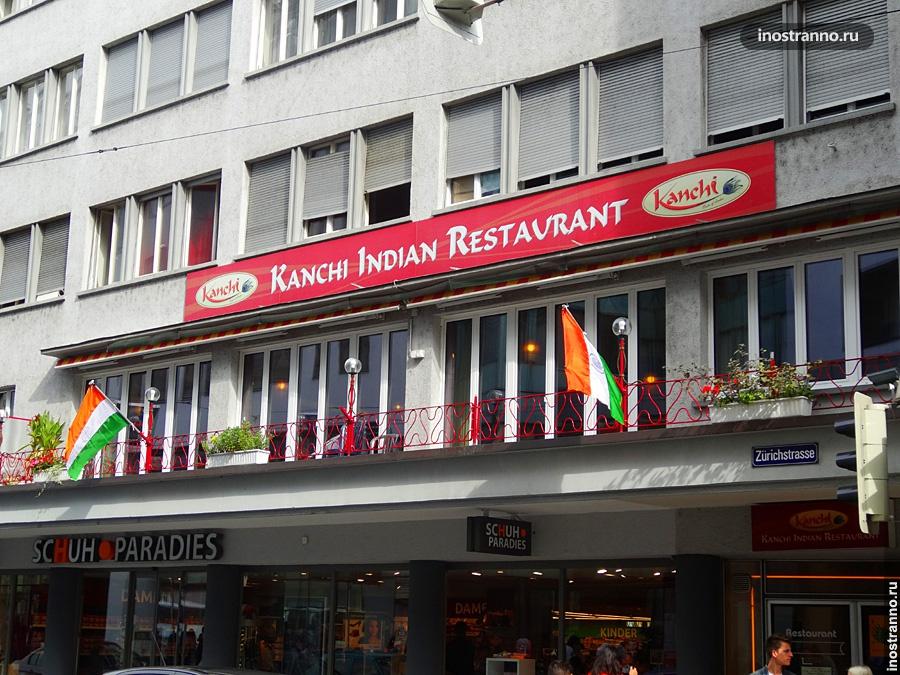 Many of the buildings on the waterfront are fashionable hotels and restaurants. It is here you can stay in the excellent Hotel des Balances, which is within walking distance of all the sights of the city. 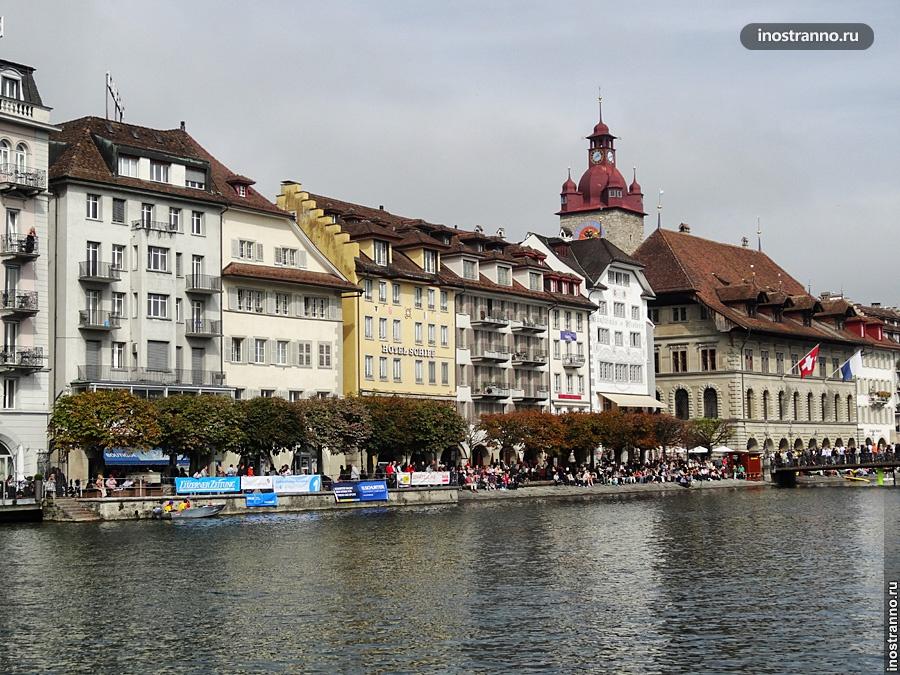 In the city center you can easily find supermarkets Coop, Migros and Spar. After all, if you are on a tight budget, you can buy sandwiches, juice and cookies in a supermarket, with which you can easily satisfy your hunger.

As a gift, I recommend chocolate at Confiserie Bachmann at Schwanenpl. 7, Luzern. During my trip I bought Swiss chocolate in various stores, and it was here that I happened to buy the most delicious chocolate. This pastry shop is famous all over Switzerland and you can buy handmade chocolates, dark chocolate and premium milk chocolate with various additives. Your friends and family will be happy with such a gift. However, you won’t be happy with the prices: a box of chocolates costs about 20 francs and a chocolate bar 4.6 francs. 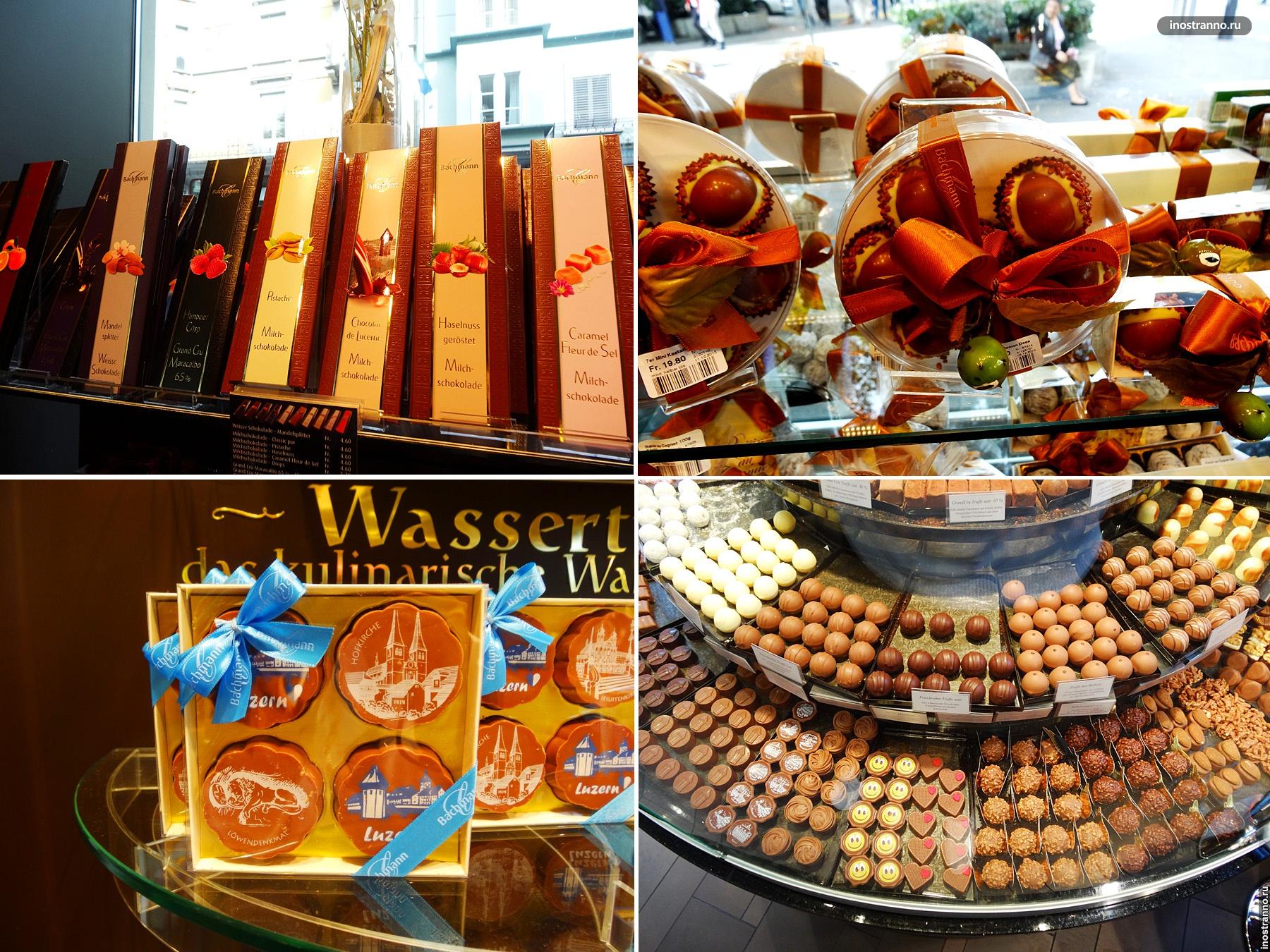 During our visit to Lucerne, there were rowing competitions on the river Reuss. 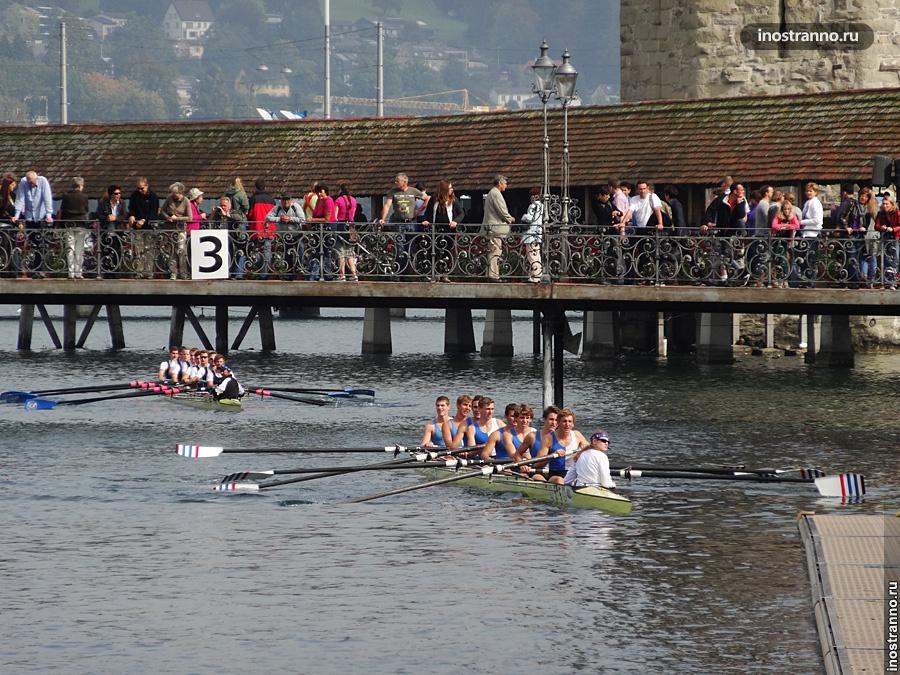 On the mountain we saw Gütsch Castle, built in 1888 by architect Emil Vogt, who decided to create the fabled Neuschwanstein Castle in Switzerland. The castle is now the boutique hotel Chateau Gutsch. One of the most expensive hotels in town and one of the most visited luxury hotels in Switzerland. The cost of a room is 180 euros per night. The hotel has a total of 27 rooms overlooking the lake, at night the view from the rooms is especially romantic, because it is a pleasure to admire the stars and the moon in front of the mountains. 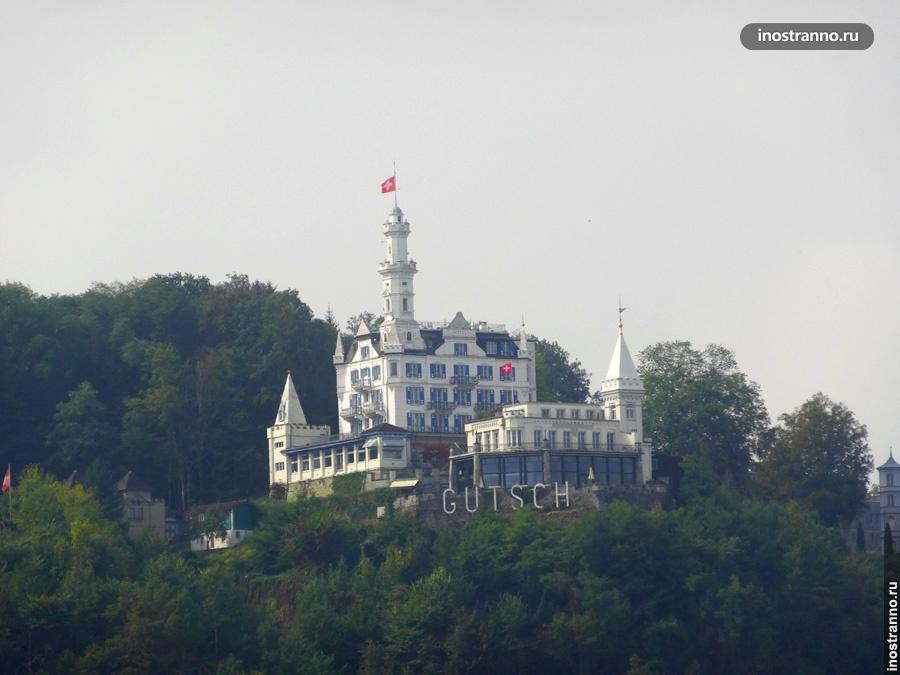 The locals show with all their appearance that life is good: they do not rush anywhere, you can see a lot of expensive cars in the city. This is not kitsch, the Swiss can really afford to buy expensive cars, it’s like in the joke about the Swiss bank and the client who deposits 5 million dollars and is told that poverty is not a vice in their country. 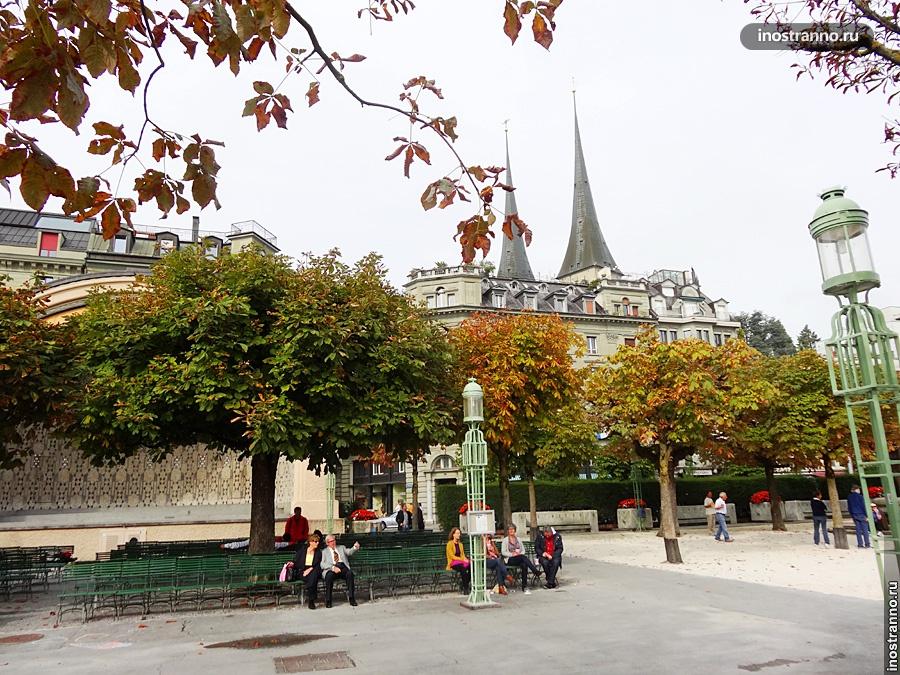 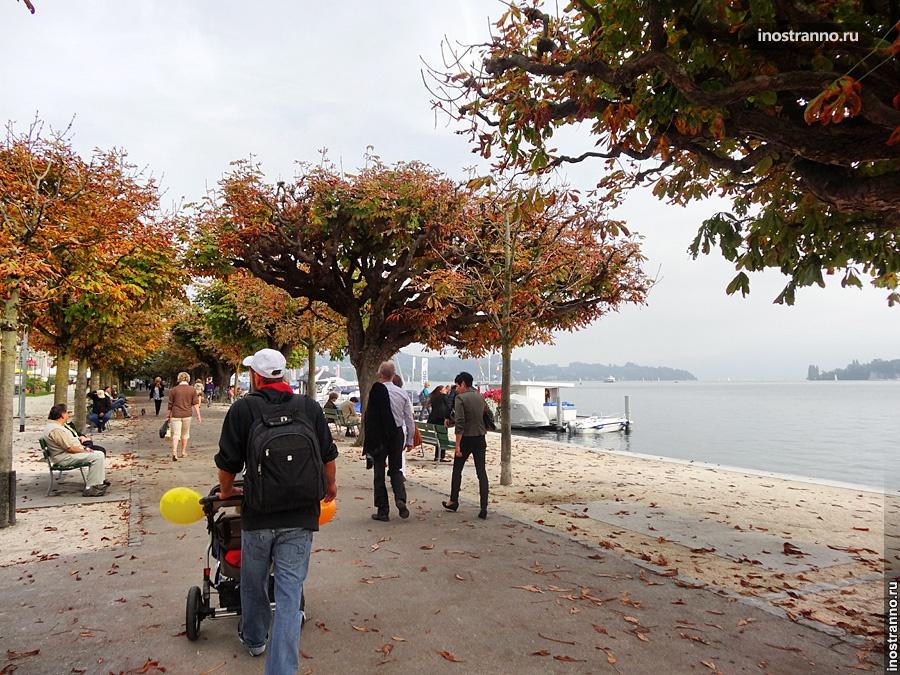 While walking around the city you are sure to come across many beautiful medieval houses, you will see small cozy courtyards and for sure you will want to stay here for a few days. Walking along the paved streets, Lucerne, we noticed that the facades of the old houses are decorated with colorful decorative paintings, telling about the events of the 19th – early 20th centuries. 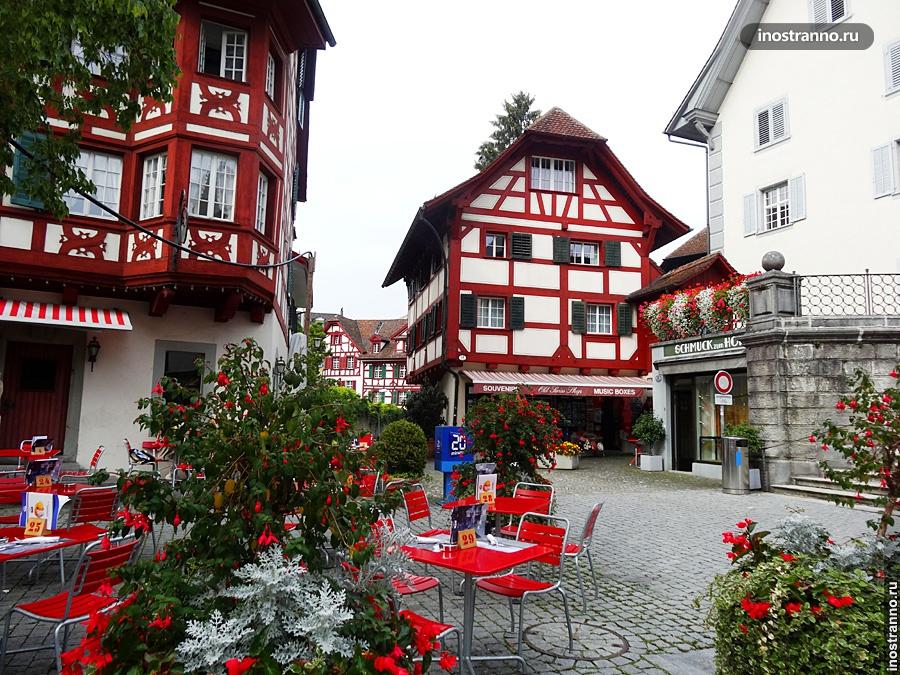 To summarize, I can say that if you’re going to Switzerland, be sure to visit this city, you will love it and remember it for many years.