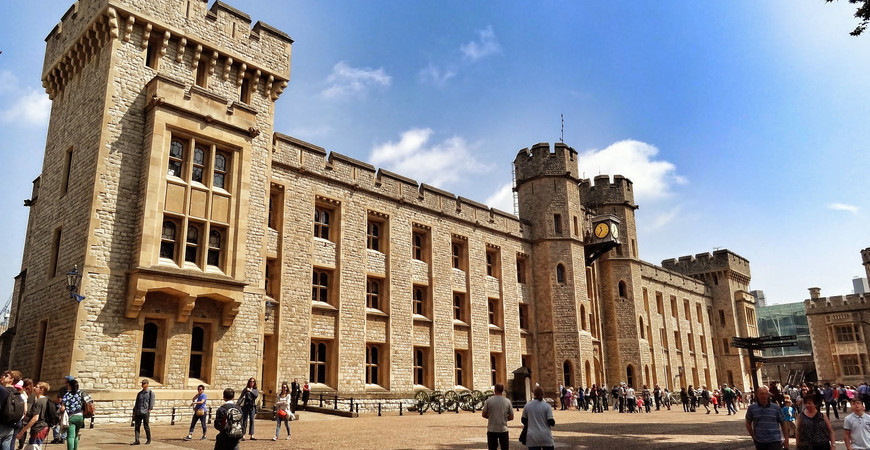 Covered by myth and legend the Tower has stood on the banks of the River Thames for almost a thousand years, and is one of the most recognisable symbols not just of London, but of Britain as a whole.

About 3 million people visit the landmark every year. It’s considered that William I the Conqueror who defeated the Anglo-Saxon armies at the Battle of Hastings ordered the construction of the fortress, after which he was crowned in Westminster.

Though the Norman bastard duke had no legal claim to the English crown, through sheer force of arms and skillful diplomacy he managed to establish himself on the shores of misty Albion, proclaiming himself king of England.

The construction of the citadel was continued by Richard the Lionheart. During his reign new strong defensive lines were built along the Tower’s perimeter: additional watchtowers, two rows of battlements and a deep moat appeared. The stone castle became the impregnable fortress of the Old World and has remained almost in its original form to this day, as it has never been exposed to destruction throughout its history.

Over the centuries, the Tower has been used as a residence for monarchs, a mint, a prison, a treasury, an armory, an observatory, and even a menagerie. The historical monument is a UNESCO World Heritage Site since 1988.

This massive donjon is a typical example of Norman military architecture. Built at the end of the 11th century, the four stories high, 32 to 36 meters in length and 27 meters in height, was the home of the rulers and courtiers. Nowadays there are interactive exhibitions. For example, the exhibitions Dressed to kill and Line of Kings are devoted to the history of weapons and armor. Here you can see what armor the knights wore, pick up swords and clubs, test your marksmanship in archery and see enlarged copies of ancient coins. The living rooms recreated the atmosphere of the palace chambers: bedroom, prayer room, podium with a throne. On the wall is a film about the life of the Middle Ages royalty. From the windows you can see the Tower Bridge.

READ
Unusual things that will surprise you in Japan

Famous prisoners of the Tower

Since 1190, the Tower became a state prison. In St Peter’s Chapel are buried the remains of 1500 prisoners who were publicly executed or secretly put to death. The first prisoner was Bishop Ralph Flambard, who managed to escape with a rope handed in a jug of milk. Then, over the centuries, a number of august figures were imprisoned, including deposed kings of Scotland and France and their families, as well as men of noble birth, aristocracy and the clergy.

Intrigue, rebellion and constant power struggles kept the casemates empty. Henry VI, the “little princes” Edward V and his brother Richard, two of Henry VIII’s six wives – Anne Boleyn and Katherine Howard, the “Queen of Nine Days” Jane Grey and her husband Guilford Dudley, the aged Countess of Salisbury – all lost their lives in the Tower. Elizabeth I, the last of the Tudor dynasty, during the reign of her cousin Mary Stuart, spent two months in prison awaiting her fate, but was released and already took the throne herself, sending her sister to execution.

Prisoners of war were often tortured. So, Guy Fawkes, who tried to blow up the Houses of Parliament, in 1605, was on the rack and gave up the names of the accomplices of the so-called “Gunpowder Plot”. The Torture Chamber is located in the dungeon of Wakefield Tower.

The last time a death sentence was carried out in the Tower was in 1941, when Joseph Jacobs was shot for espionage. And the last criminals to go to prison in 1952 were gangsters: the Kray twin brothers led a gang called The Firm. That was the end of the castle’s darkest pages. Now theatrical performances are staged, simulating the passage through the castle grounds of “prisoners” escorted by guards.

Those sentenced to death were executed outside the castle, on Tower Hill. The guilty man’s head was beheaded and impaled on a stake for all to see. Where the scaffold and scaffold stood, there is a glass structure in the form of a cushion, on which the head is dented. An inscription on the plaque tells of the “tragic fate and sometimes martyrdom of those who, in the name of faith, country and ideals, risked life and accepted death.”

READ
10 things to do in Paris, France

Guardians of the Tower

The Yeoman Warders are part of the Royal Life Guards. Only those who have served in the army for at least 22 years and have awards for distinguished service can become Yeoman Warders. The guards not only keep order, but also give tours. Every evening there is a ceremony of closing the fortress for the key. You can watch the process for a fee. Changing of the guard is not as spectacular as near Buckingham Palace, but also attracts tourists.

The first palace guards appeared in the Tower in 1485, and they are on watch to this day with the observance of tradition. The unofficial name “Beefeater” comes from the words “beef” and “eater”, and according to one version it appeared at a time when the inhabitants of the city were starving, and the guards regularly received meat rations, for which the people dubbed them “meat eaters.

Another honorable historical position is that of Ravenmaster . According to an ancient prophecy, the English monarchy would fall when the ravens left the Tower. Therefore, birds on official allowance are carefully monitored, fed and their wing feathers trimmed. There are about 10 birds in the population, each with its own name and record card, and the birds are distinguished by the ribbons on their feet.

Treasures of the British monarchy are on display at Waterloo Barracks. It is forbidden to take pictures of the exhibits; visitors pass by the glittering jewels on the travlator.

The Coronation Spoon in gilded silver has been used for more than 800 years to anoint queens and kings with holy oil. The Sovereign’s Sceptre with Cross is encrusted with the world’s largest cut diamond, Cullinan I. Another world-famous diamond Koh-I-Noor or “Mountain of Light” adorns the Imperial State Crown. Other crowns, regalia of sovereignty, tiaras and gold tableware are also in the collection.

From October through the end of May, the Tower is open from 9 a.m. to 4:30 p.m. Tuesday through Saturday; Sunday and Monday, 10 a.m. to 4:30 p.m.; and June 1 through mid-to-late September, the historic and architectural complex is open longer, until 5:30 p.m. The last opportunity to go inside is half an hour before closing time. But since it takes an average of three hours to see it, it’s best to arrive in the morning.

The ticket office is located in the Welcome Centre building opposite the entrance to the fortress, and you can book tickets in advance on the Tower’s official website.

You can buy a ticket with a donation to the Tower of London’s charitable work; it’s 10% more expensive.

Buy a ticket to the Tower of London:

Exclusive guided tour of the Tower of London:

Combination tickets with a visit to the Tower of London:

Audio guide available in many languages including Russian. Rental price: £4 for adults, £3 for children.

The tour with the beater starts from the main entrance every half hour. The last pickup is at 2:30 pm in winter and 3:30 pm in summer. The White Tower Tour is a separate tour of the White Tower and St. John the Evangelist Church, and the cost is included in the main ticket.

Visitors with children are advised to contact the Welcome Center, where they will be given free electronic bracelets for the child, on which they will record the phone number of their escorts in case the young guest gets lost.

Tourist route is carefully thought out. Navigation is facilitated by signs, and the recommended way is built in such a way that the flow of people moving in one direction. If you go up one staircase, you will go down another. The most important information is printed on the stands in 10 languages, including Russian. There is free Wi-Fi.

There are kiosks with drinks and ice cream on the territory, and you can have a snack at New Armourie Cafe. Service is on the principle of the canteen, customers choose their own dishes to their taste. Nearby on the waterfront is the Apostrophe fast food pavilion and the Perkin Reveller restaurant. The Tower is in the City District, where there is no shortage of cafes like KFC, Nero, and other food outlets.

Tower of London is a two-storey souvenir store located outside the castle walls in the Welcome Centre. You’ll find tea, medieval armour, tapestries, cushions with pictures of knights, beautiful ladies and armorial lions.

The Beefeater Shop, located at the audio-guide station, is dedicated to the guards of the Tower. There are toy yeomanry, guidebooks, postcards and magnets on display.

The Jewel House shop is next to the royal treasury. On the counters are copies of Anne Boleyn’s pearl necklace, Tudor rose pendants and other jewelry.

The Ravens shop is near Tower Green, home to crows. There are blackbird figurines, pencils with feathers, notebooks, books and mugs. Step into one of the two mirrors and you can be either wearing a crown or a knight’s helmet.

There are several forms of public transport to get to the Tower:

You can hail a cab using popular mobile apps like Hailo, Gett and Uber.