Czech Republic is one of the European countries with a rich history, culture and traditions which have found their embodiment in the monumental architecture – the construction of medieval castles. One of such creations of the great Czech architects is Litomysl Castle in Litomysl.

This elegant castle palace was built in a magnificent Renaissance style and is one of the most beautiful Renaissance structures on the European continent. Work on this truly architectural masterpiece continued from 1568 to 1581. The castle appears to tourists as a peculiar example of an immaculate and majestic arcaded castle palace.

The chateau project was originally designed in Italy, but later it was modified and augmented during construction in the Czech Republic in order to introduce an original and innovative solution that would serve as a real breakthrough in the field of architecture.

Litomyšl palace complex is a cultural and historical monument, recognized by UNESCO as a universal human heritage.

Tourists who come to the castle, can see it as it was built in 1568-1581 by the famous Italian architect Giovanni Batista Aostalli for the crown prince of the Bohemian Kingdom, Pernstein Vratislav. In a little later time, the Gothic chapel of St. Monica was added to the architectural ensemble of the castle.

Tourists admire the beautiful exterior walls of the castle, which according to the traditional local canons are painted in sgraffito technique. The castle building is constructed as an asymmetrical three-story building with four wings. The exterior facades are decorated with paintings of fabulous beauty, made up of applications made with stones made to look like diamonds.

The window openings of the castle have wide moldings and lintels. The southern facade of the château welcomes visitors with a semicircular arch with two columns framing it, the upper part of which bears the coat of arms of the families Pernstein and Marnicas de Lara. The chapel with its lancet windows and towers with a pyramidal roof blend in nicely with the castle complex.

In its original design, Château Litomichele was conceived and erected as a “castle with arcades”. This project was one of the most popular in Italy, and in the sixteenth century it was approved and accepted in the center of Europe. Looking at the castle, tourists pay attention to the amazing beauty of architectural solutions. Which were brought to the castle complex in the eighteenth century, in the form of elements of high Baroque and decoration. The castle is well preserved a number of buildings, which are only peculiar to the residence of the aristocrats of the time.

During its long history the castle has had several owners, which certainly influenced the decoration of its rooms and interior. Each change in the interior of the castle took place in accordance with the fashion and tastes of that or that time and the predilections of its owners. For example, the Hall of Mirrors was decorated with battle scenes to the glory of Eugene of Savoy’s victories.

In 1796 the castle owner Waldstein created a beautiful theater scene, which can still be seen today. The theater itself was designed by the court maestro Dominikan Dvořák. Their Lordship himself and his relatives played on those stages. In the year 55 of the 19th century the castle was purchased at an auction by the Princes of Turun and Taxis, who owned the palace and castle complex until World War II, visiting Litomyshl only occasionally.

After the end of the war, the entire castle and the surrounding area passed into the possession of the state – it was nationalized and converted into a museum of Czech music. Every year this Czech town hosts an opera festival in its beautiful chateau in honor of the composer Bedřich Smetana, who was born in one of the chateau buildings.

Most of the interiors in the castle halls are in the Renaissance style, but there are also some Neoclassical and Baroque halls. This is all reflected in the decoration of the walls, paintings and exquisite furniture. Some halls exhibit the works of outstanding masters of painting of the past centuries. Adjacent to the castle is a wonderful old park, with manicured alleys and shady pavilions, where it is so pleasant to relax. There are special tours for tourists, just to see the sights of the castle. 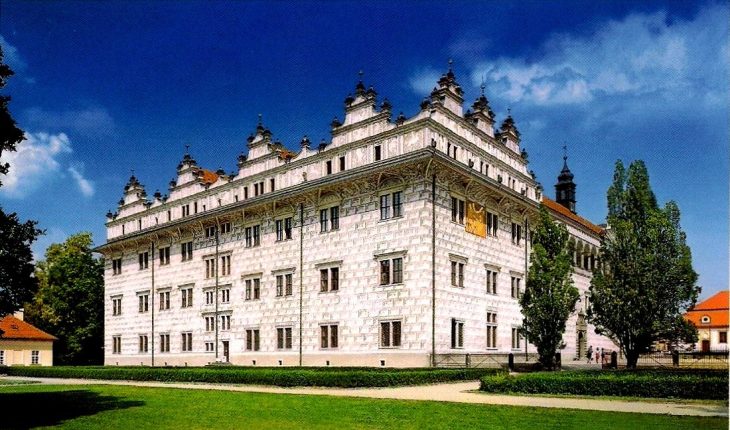 The Litomyshl Castle, the pride of the homonymous Bohemian town, will captivate the soul of any fan of Renaissance architecture. It was not in vain that it was called the most beautiful castle in East Bohemia, as its elegant and sophisticated exterior is long remembered. The beautiful white building of Litomyšl Castle is decorated with intricate arcades and majestic gables, while its walls are hand-painted in a unique sgraffito technique. In summer an international opera festival “Litomyšl Smetana”, named after the famous composer Bedřich Smetana, a native of the castle, takes place in the castle courtyard.

The first mention of the predecessor of Litomyshl Castle can be found in the chronicles of Bohemian chronicler Kozma of Prague, who mentions that in 981 a small border castle of Slavnik had stood on the site of the present-day castle. In this fortress at the end of the 9th century, the creators of the old Slavic alphabet, the preachers Cyril and Methodius, founded the Church of St. Clement, which later became the center of the diocese for the churches of western Moravia and eastern Bohemia. The documents of 1398 on the division of property between the bishop and the head of the Catholic Premonstratensian monastic order contain the first mention of a castle in Litomyšl.

In 1425 Litomyšl was occupied by the Hussite troops who destroyed all the church buildings in the town and severely damaged the medieval castle. After the end of the Hussite wars the castle was reconstructed by the new owners of Litomyšl, the Kostka family from Postupice. The foundations and some fragments of the Gothic castle of that time, which was destroyed by fires in 1460 and 1546, have been preserved inside the present-day Litomyšl Castle. 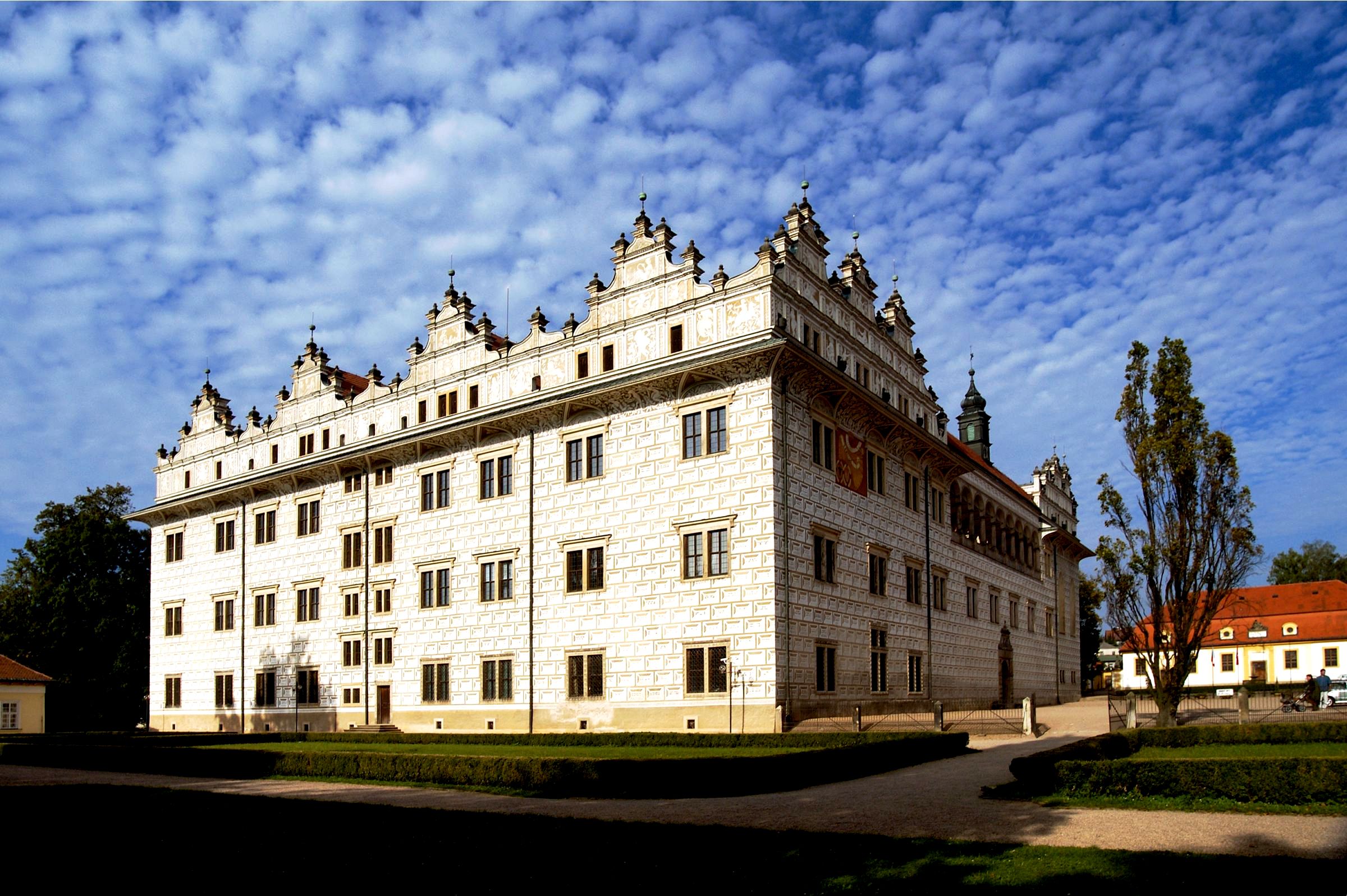 In 1547, by order of Emperor Ferdinand I, Litomyshl Castle was confiscated from the Kostka family because one of the family, Bohus Kostka, took part in the anti-Habsburg rebellion of Czech nobles. In 1560 the castle was destroyed by fire again, after which the dilapidated building was neglected for several years. The medieval ruins were acquired by the supreme chancellor of the Bohemian kingdom, Vratislav of Pernštejn, in 1567, who took advantage of his position at court to receive a royal donation to rebuild the castle. 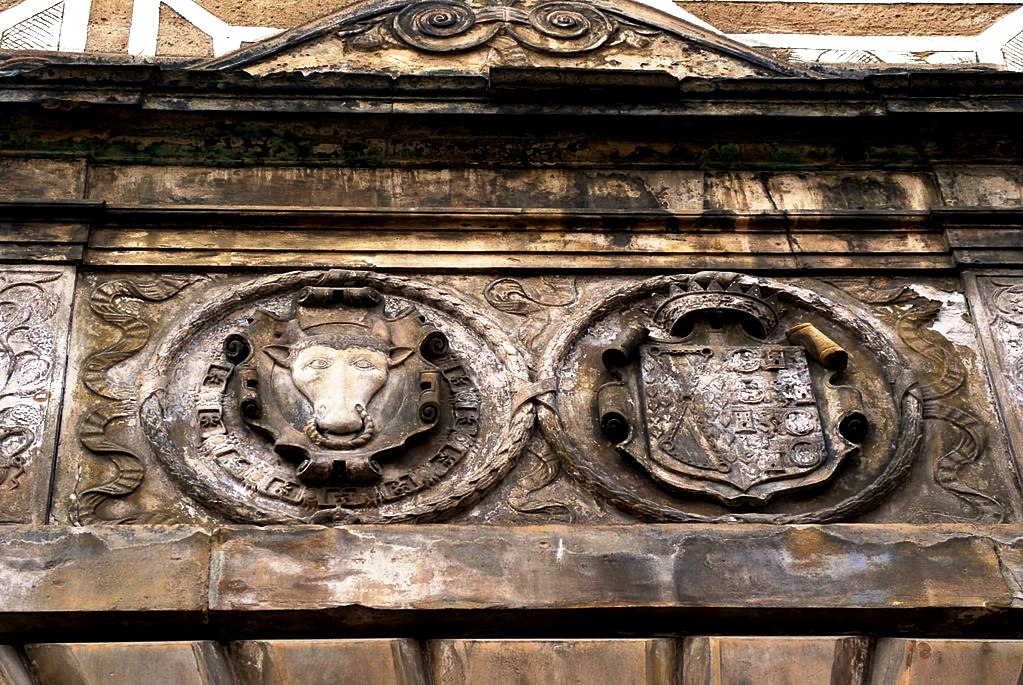 The Pernštejn family had owned Litomyšl Castle for almost a century, during which time it changed from a dilapidated and gloomy Gothic building into a veritable gem of Renaissance architecture. Construction of the new castle began in 1568 and lasted more than 12 years, the main masters were court architects Giovanni Battista Aostelli and his brother Ulrico. During this period, the same sgraffito decorations were made on the facade and gables of the castle that fascinate visitors to the Château of Litomyshl even today. 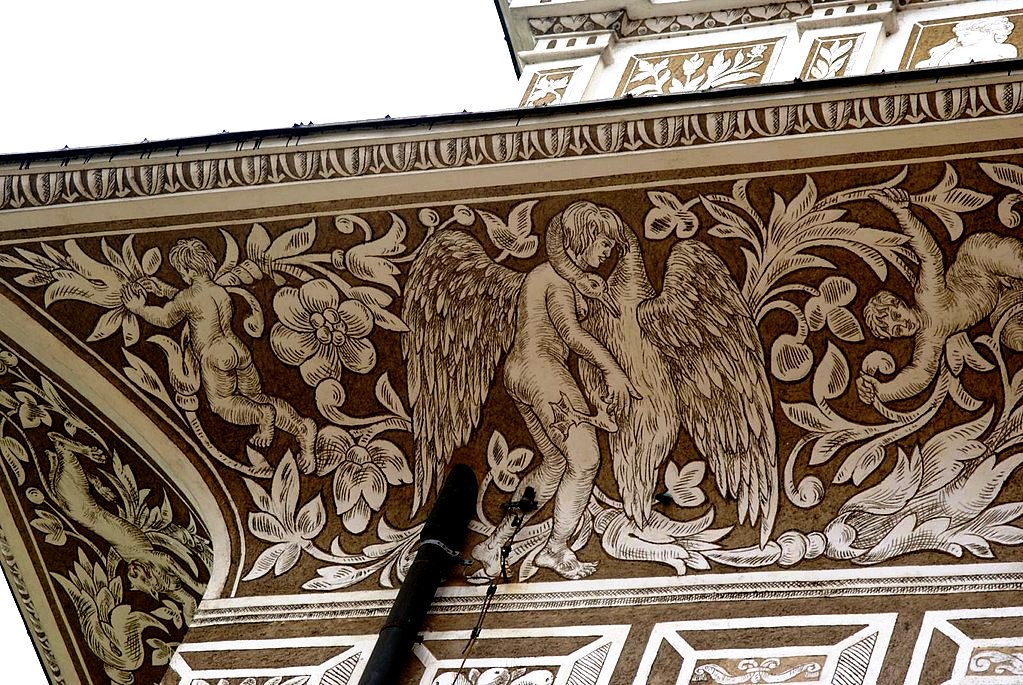 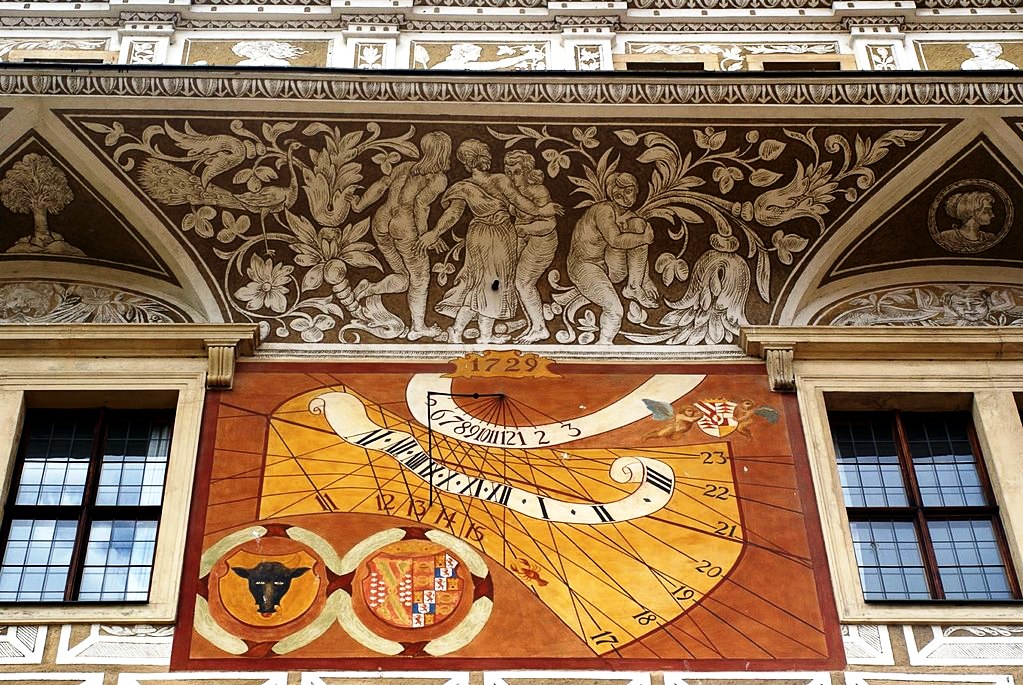 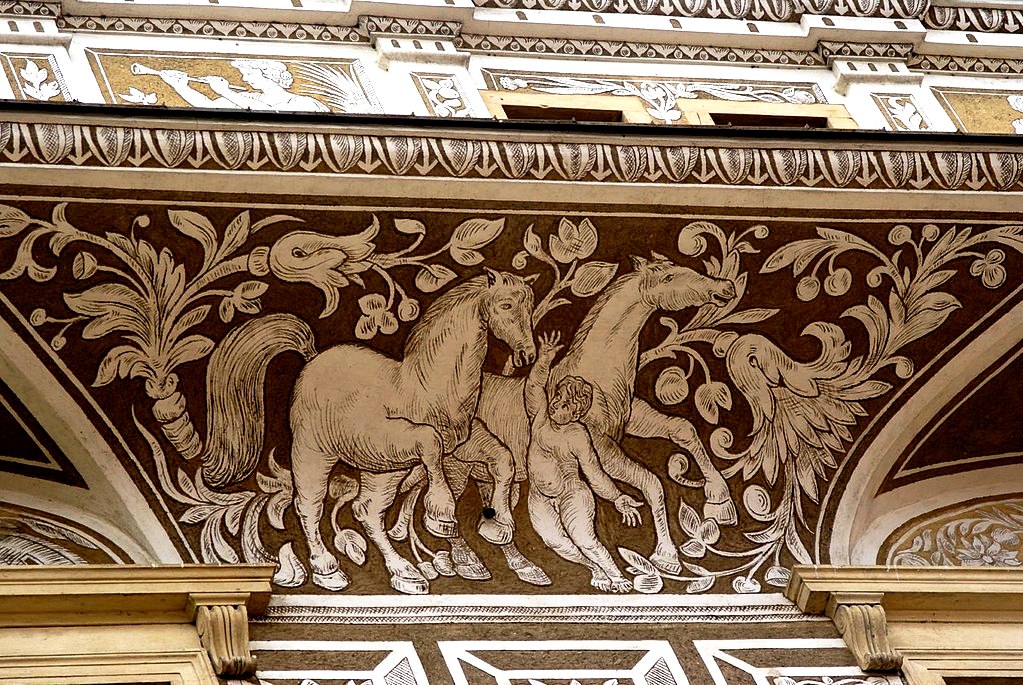 After the Perštejn family broke away in 1646, Litomyshl Castle and the surrounding land came under the ownership of the Trauttmannsdorf family. During their reign in 1719 there were made some reconstructions in High Baroque style, which were supervised by architect Frantisek Kanka. In 1753, due to marriage politics Litomyšl passed to the Waldstein-Wartenberk family, which were the last owners who undertook any significant changes in the castle architecture. The major works took place in the 1790s, when the interiors of the castle were changed following a fire and a chateau theater was built, the unusual scenery for which was created by the Viennese court painter Josef Platzer.

In 1855 Litomyshl Castle was sold at a public auction to Prince Thurn-Taxis, whose heirs continued to own the castle until the end of the Second World War. After the war the castle was nationalized and in 1962 it was declared a national monument of history and culture. In 1999 Litomyšl Castle was included in the list of UNESCO World Heritage Sites. 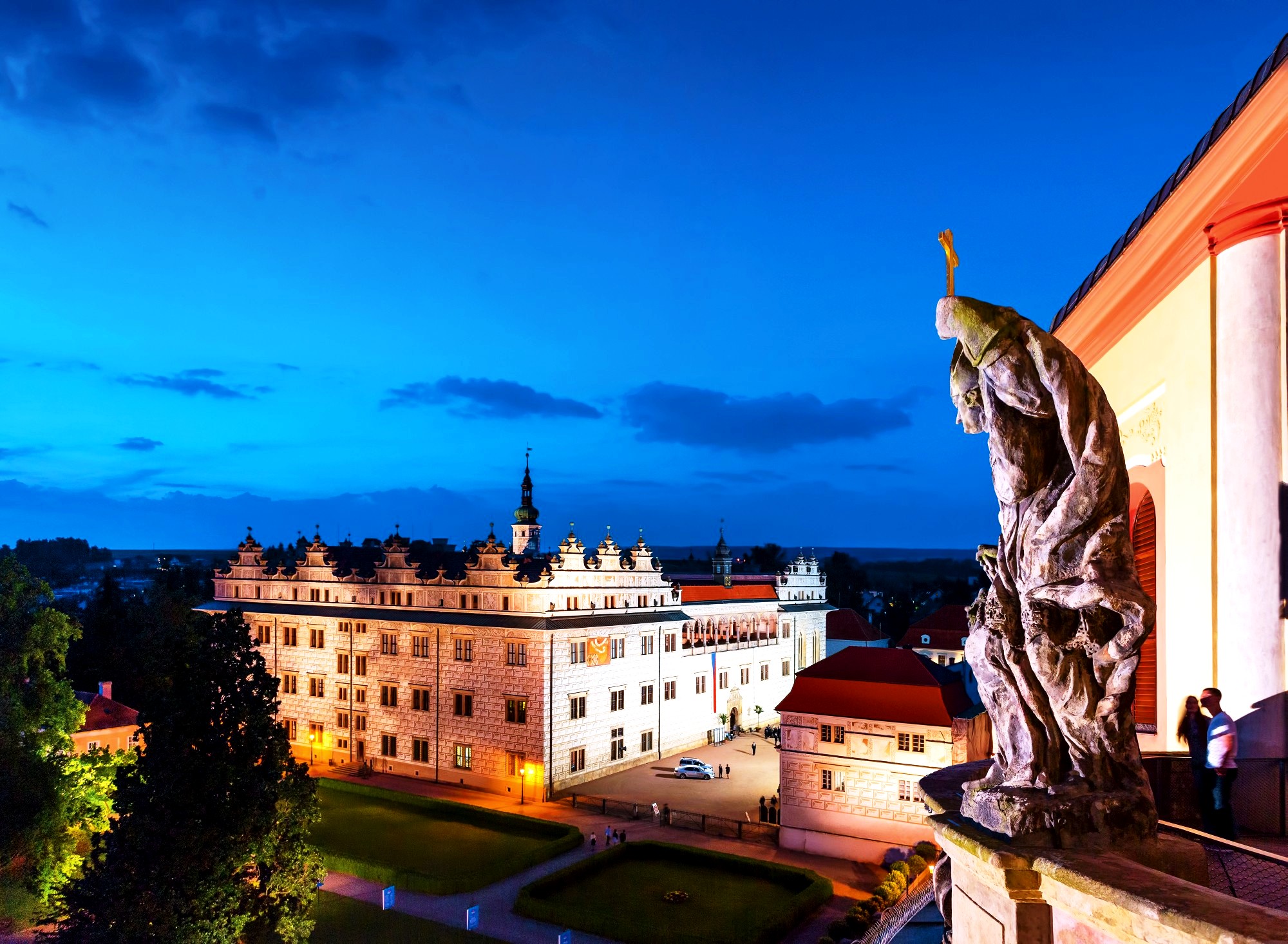 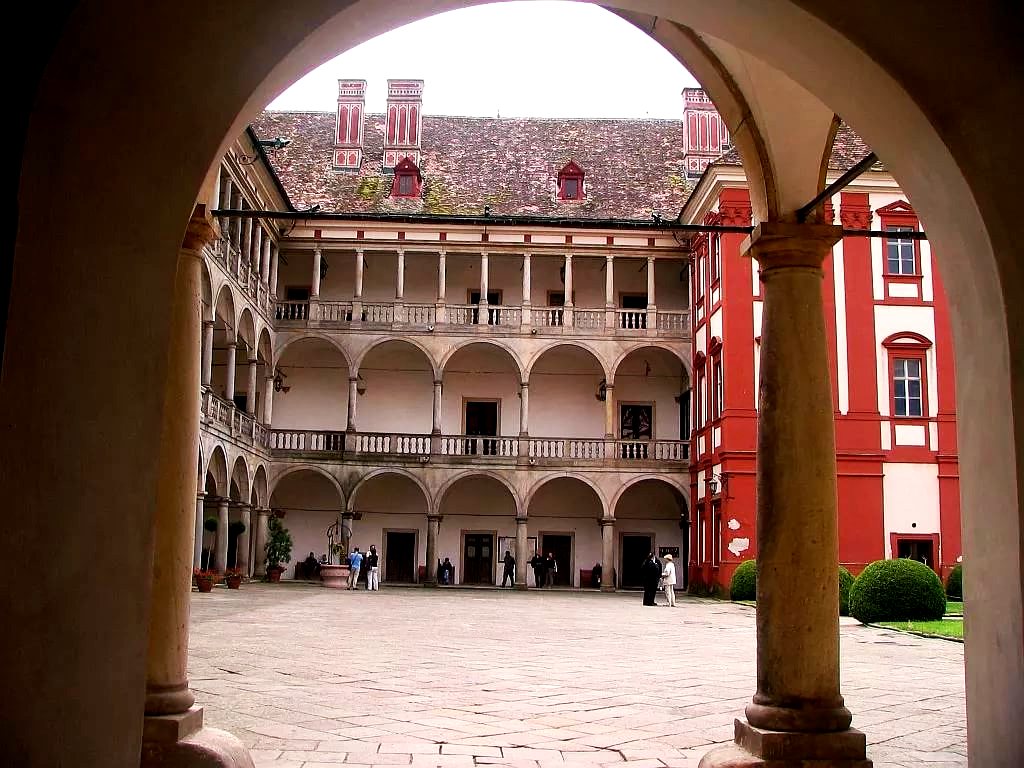 Litomyšl Castle is famous for its musical events and concerts, for which it was even nicknamed the “music box of Europe”. There is a music museum in the castle, devoted to the creative activity of Bedřich Smetana, the founder of Czech music, who was born in a family of a castle brewer and lived in a house opposite Litomyšl. During summer days every year for more than five decades a festival of opera and classical music “Smetana Litomyšl” takes place in the courtyard of the chateau, which became famous as the biggest open air music festival in the Czech Republic. 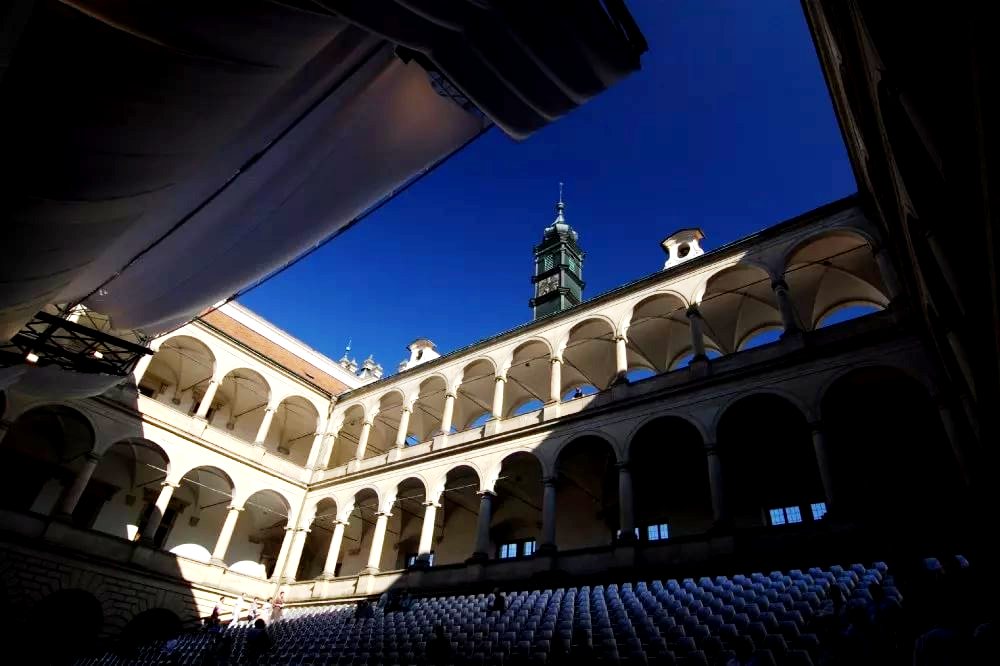 One of the main attractions of Litomyšl Castle is the old theater, which was built in the west wing in 1796-97. The Baroque-style theater was built entirely of wood, but its painted auditorium panels, stage decorations and machinery have been preserved in excellent condition. The theater seats about 150 spectators, who are accommodated in 9 loggias and in the parterre. 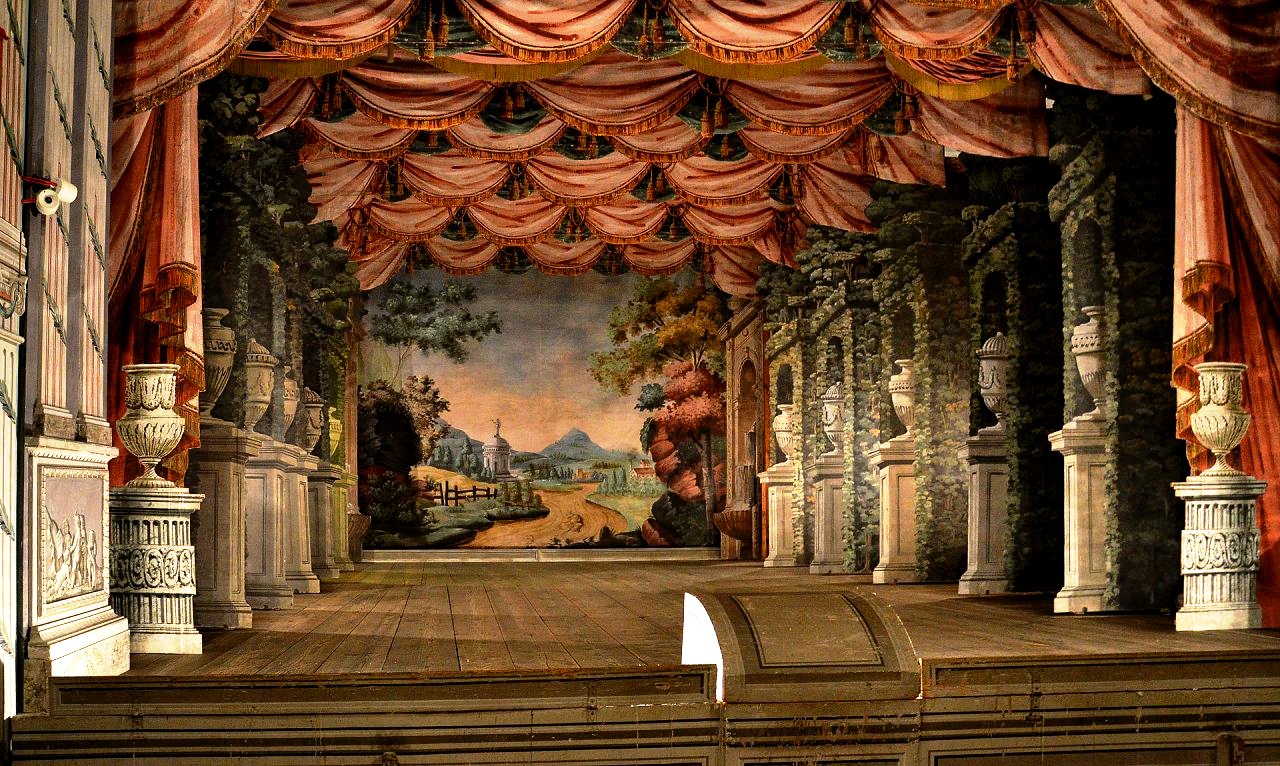 In addition to this private theater in the castle are available to view more than a dozen different rooms, which have preserved the unique interiors of the 18th and 19th centuries. The castle’s billiard room, library and chapel also deserve the attention of visitors. 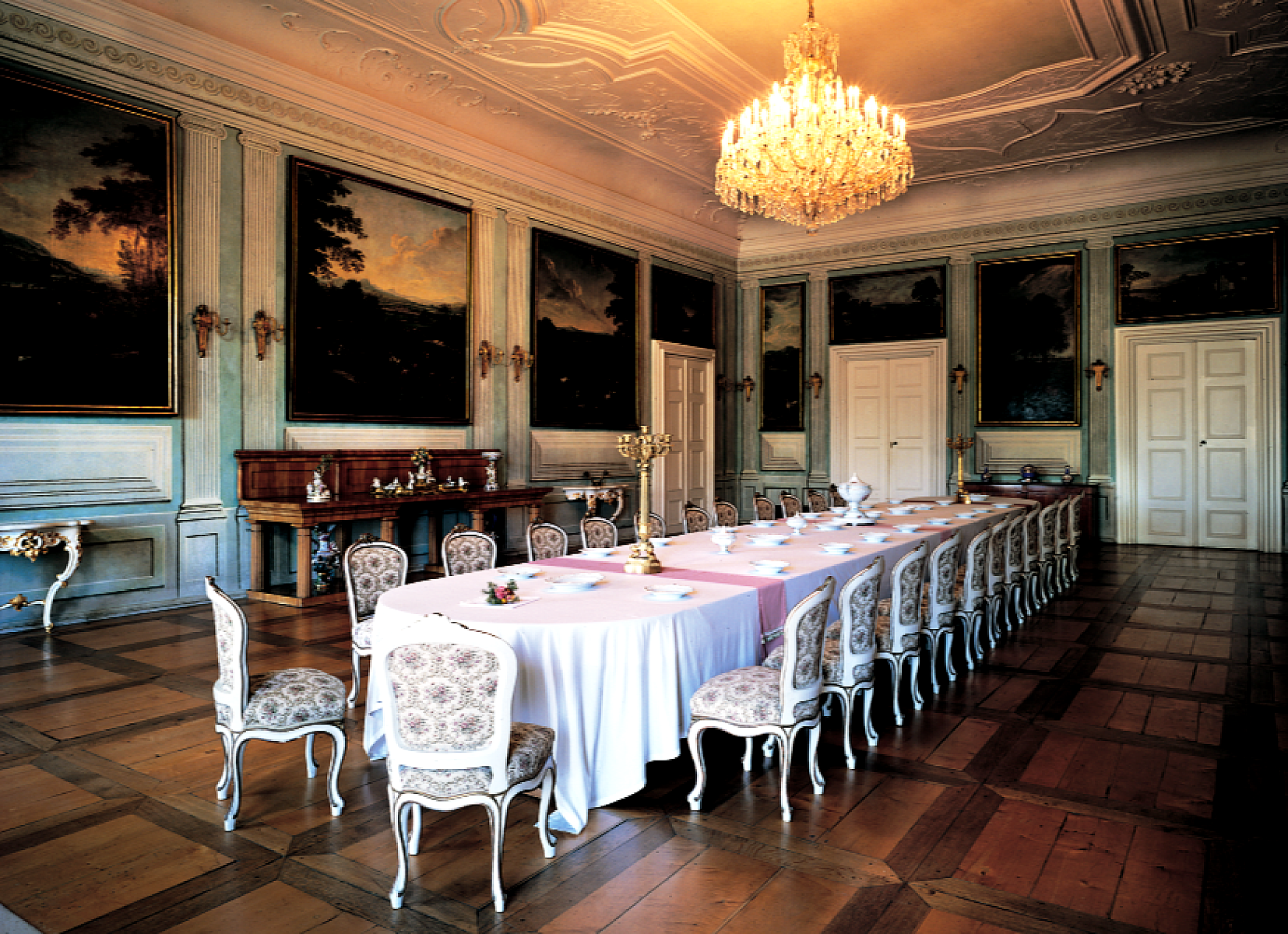 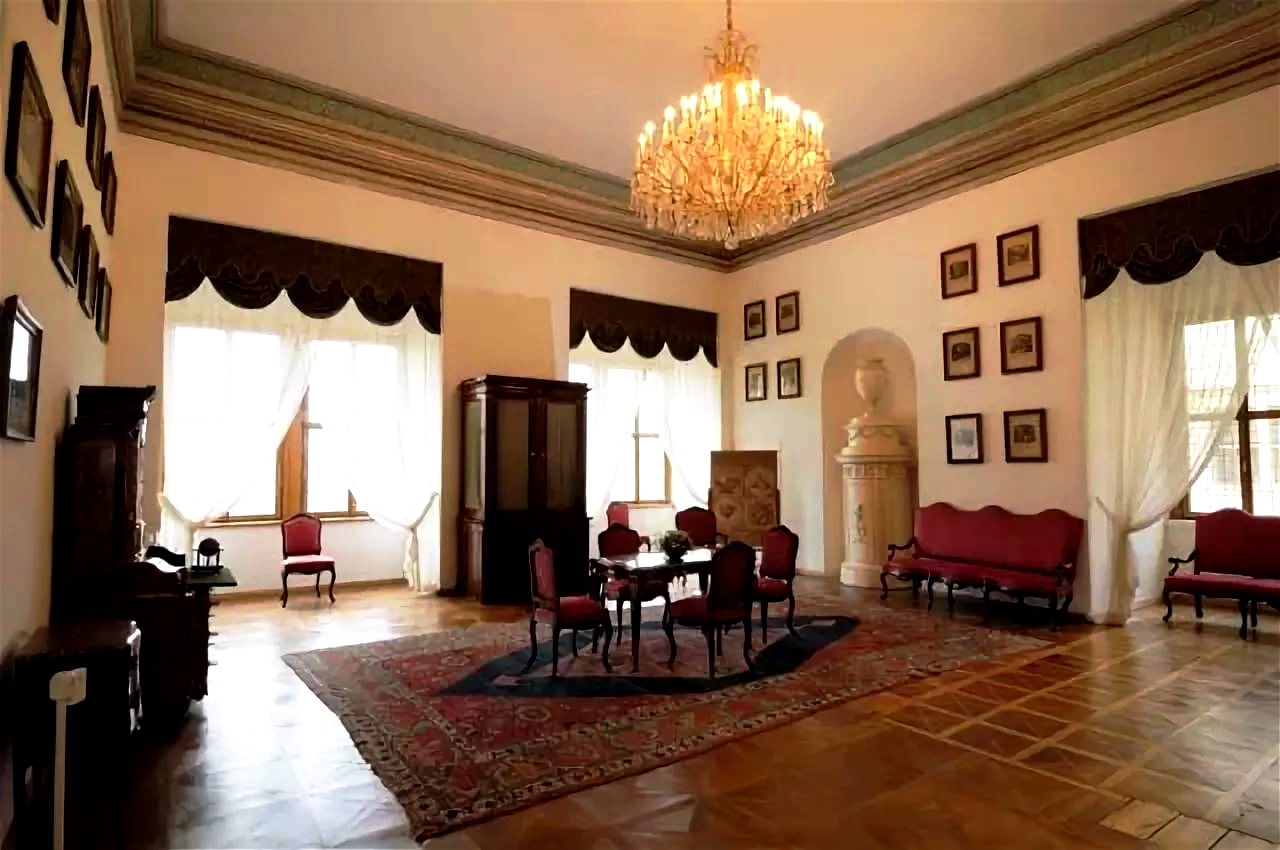 Litomyšl Castle may be of interest not only to fans of classical art, but also to lovers of the avant-garde. In the western part of the castle grounds, in one of the alleys of the beautiful garden is the entrance to the underground museum, where the works of the famous Czech sculptor Olbram Zubek are on display. During the totalitarian regime, this sculptor was deprived of the opportunity to create and exhibit his work, so he decided to settle in Litomyšl and devote his life to the restoration of the ancient castle. Now, in memory of the master and his difficult life, the castle has a gallery filled with unusual, sad and strange sculptures that can evoke a whole range of emotions.