Lisbon (Portugal) – the most detailed information about the city with photos. The main sights of Lisbon with descriptions, guides and maps.

The city of Lisbon (Portugal).

Lisbon is the capital of Portugal, as well as the largest city and port of the country. It is located on the left bank of the Tagus River on the Atlantic Ocean. Lisbon is one of the most beautiful cities in southern Europe with an amazing atmosphere, saturated with sea and sun. The capital of Portugal charms with its white limestone buildings, pretty streets with yellow tramways and casual charm.

Lisbon has a wealth of historical monuments, interesting museums and cultural events. It is a city of vibrant architecture, steeped in the tradition of Fado music, the smell of food and seafood. Lisbon should be enjoyed at an easy and leisurely pace. And you’ll fall in love with its welcoming character and sunny charm.

Things to do (Lisbon): 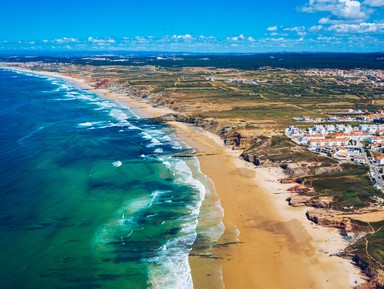 Sintra, the Atlantic and Cape Roca

Experience the edge of the world at sunset, visit a fairytale castle and enjoy the ocean at Guincho Beach 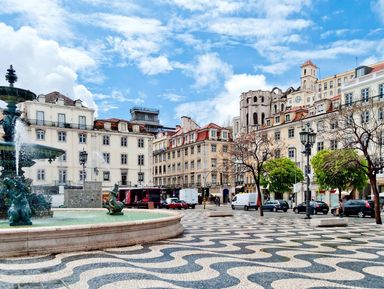 All Lisbon: on foot, by streetcar, cable car and elevator

Lisbon is the westernmost capital of Europe. The city is located at the mouth of the Tagus River on the southwestern Iberian Peninsula and occupies the western shore of the Mar da Paglia Bay. The capital of Portugal stretches along the coast from the northern bank of the Tagus to the beaches of Alentejo. Lisbon has a warm Mediterranean (subtropical) climate. The average temperature in summer is 24 – 26 ° C, and about 10 ° C in winter.

The best time to visit the Portuguese capital is from April to October. In winter, despite the relatively warm weather, it can be quite windy. 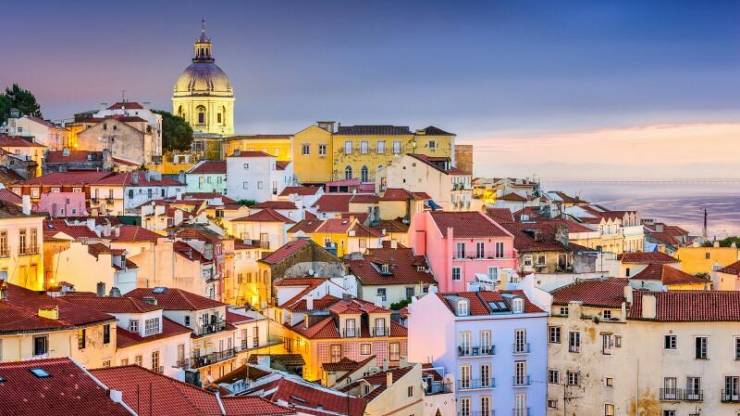 Lisbon is considered the oldest city in Western Europe. It was founded by the Romans after their defeat of Carthage as Municipium Cives Romanorum Felicitas Julia. Later the city became part of the Roman province of Lusitania. After the problem of piracy was solved and the walls that protected Lisbon from the Lusitania raids were built, it entered an era of prosperity. The city becomes one of the most important settlements of western Iberia. The Romans built a theater, thermae, temples and roads that connected Lisbon to the other ancient cities of the Iberian Peninsula. 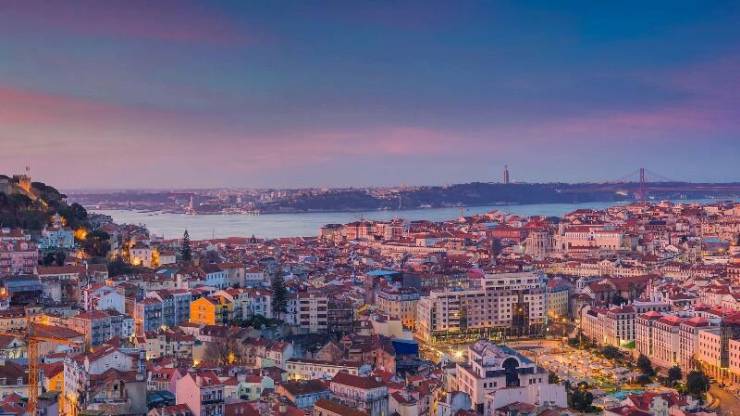 After the collapse of the Roman Empire (between 409 and 429), Lisbon suffered the raids of the Sarmatians and Vandals. Later it became part of the Kingdom of the Sveves, which was conquered by the Visigoths in the 6th century. In 711, Lisbon was occupied by the Moors, whose influence can still be seen in its architecture and culture. In 1108 the city was conquered by the Norwegian Knights, led by Sigurd I, but three years later became Moorish again. Lisbon was finally liberated in 1147 during the Reconquista.

The city became the capital of Portugal in 1255. The first Portuguese university was founded there in 1290. In the late Middle Ages Lisbon became an important center of trade between Northern Europe and the Mediterranean. In the 15th and 17th centuries the Portuguese capital is one of the engines of the great geographic discoveries. It was from here (or rather from the suburb of Lisbon – Belém) that the famous Portuguese seafarers, including Vasco da Gama, set out to sea. 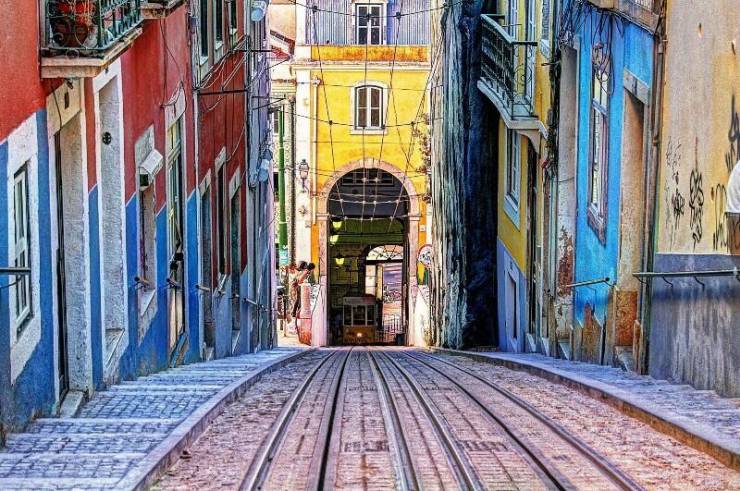 The streets of Lisbon

Between the 14th and 18th centuries Lisbon suffered massive earthquakes. The most catastrophic of these was in 1755. It destroyed 80% of the city and claimed the lives of 30 to 40 thousand people. After that the Portuguese capital has been rebuilt virtually from scratch. That is why there are so few medieval buildings in Lisbon. In the 19th century the Portuguese capital grew thanks to industry and trade. In the 20th century Lisbon became the stage for three revolutions.

Lisbon is one of the largest transport hubs of the Iberian Peninsula. The capital of Portugal is easily accessible by plane from most major cities in Europe, as well as some cities in North America, Africa and Asia. Lisbon has regular rail and bus connections to major cities in Spain and most Portuguese cities.

Lisbon has a very efficient public transport network, which covers almost the entire city and its surroundings. The fastest way to get around Lisbon is by metro. The city also has an extensive bus and streetcar network. To travel on public transport in Lisbon you must buy a green Viva Viagem card, to which you can put any amount of money. 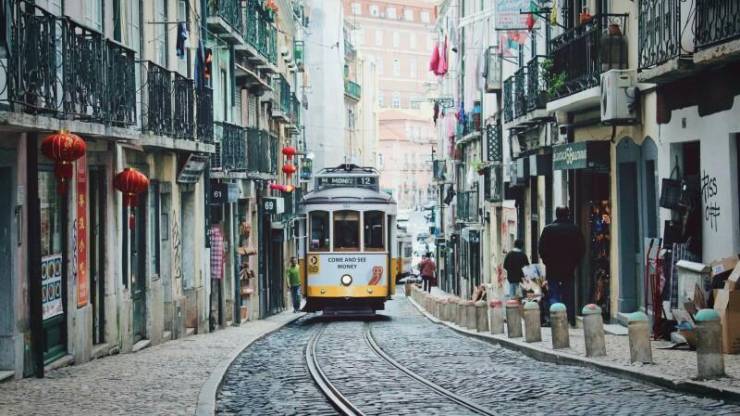 Streetcars on the streets of Lisbon

Stores in Lisbon open a little later than in other European cities, usually around 9:30 – 10:00 am. However, there are long lunch breaks. The main shopping areas are Baixa, Chiado and Avenida da Liberdade. Chiado is also full of cafes, restaurants and bookstores.

The Lisbon Shopping Card gives you 5 to 20% discount in 200 big stores Baixa, Chiado and Av. Liberdade. 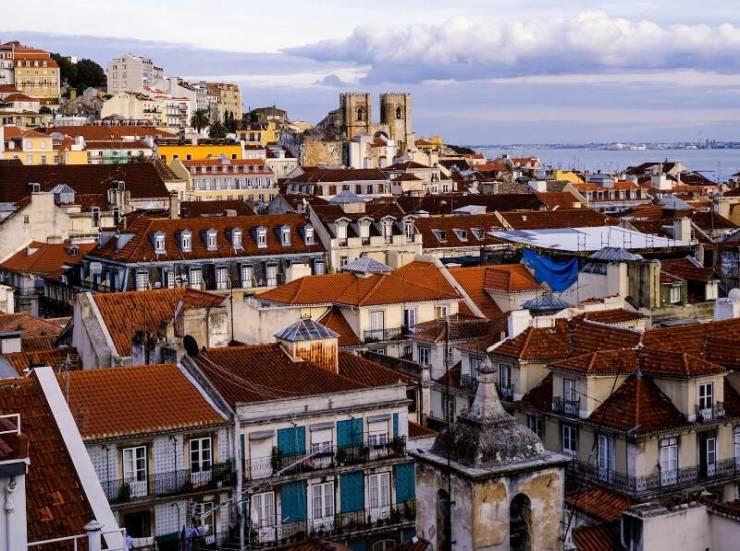 Alfama is the oldest district of the city and a true symbol of Lisbon. It is a maze of charming old streets and alleys with architecture from the late Middle Ages to the 19th century. Alfama is famous for its historical and cultural sites as well as its cozy bars and restaurants.

READ
Island of Fuerteventura, Spain - an unforgettable experience in the Canary Islands 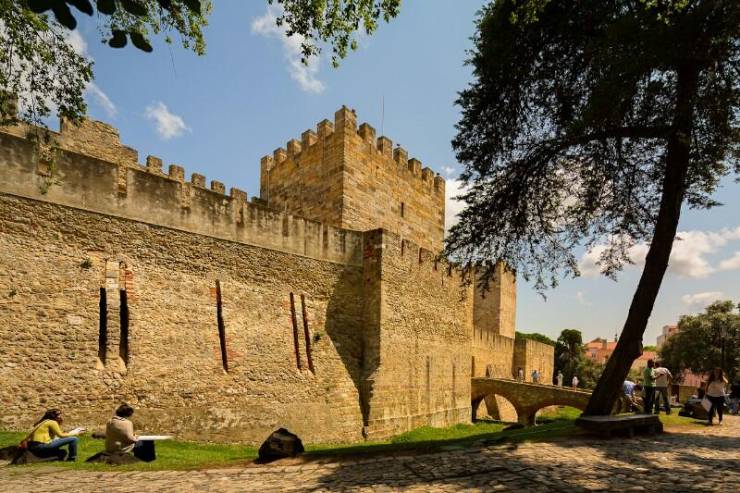 Castelo de São Jorge is an ancient castle and one of the main attractions of Lisbon. It is located near Alfama on a hilltop with a beautiful view of the city. The castle has impressive battlements, a fascinating museum and fascinating archaeological excavations. The Castelo de San Jorge was built by the Moors and recaptured by the Portuguese at the end of the 12th century. In 1511 it was expanded and fortified with strong walls. For a long time the castle served as the residence of the Portuguese kings. 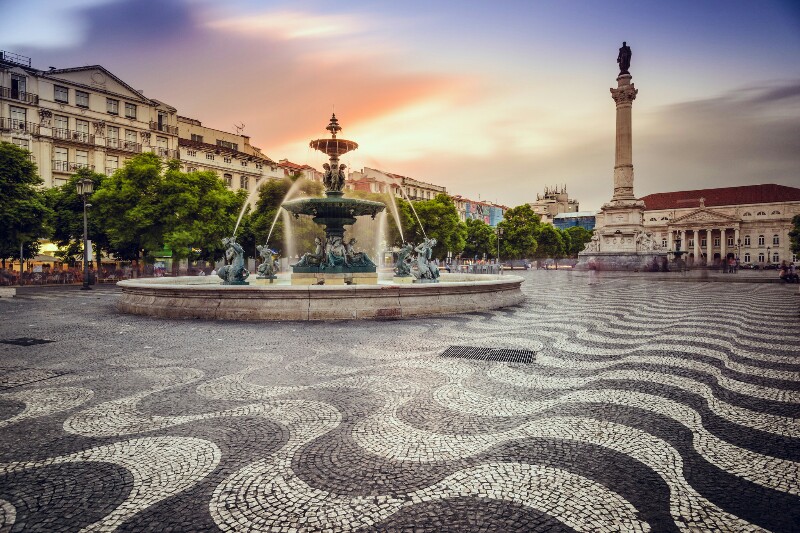 Place de Rossio is one of the central and oldest squares in Lisbon, and has been the center of city life for centuries, dating back to the Middle Ages. There are two Baroque fountains and a 27 metre high monument to the “Soldier King” Pedro IV. On the north side of the square is the Dona Maria II National Theater. It is a monumental neoclassical building built in the 19th century, with a portico of six Ionic columns. 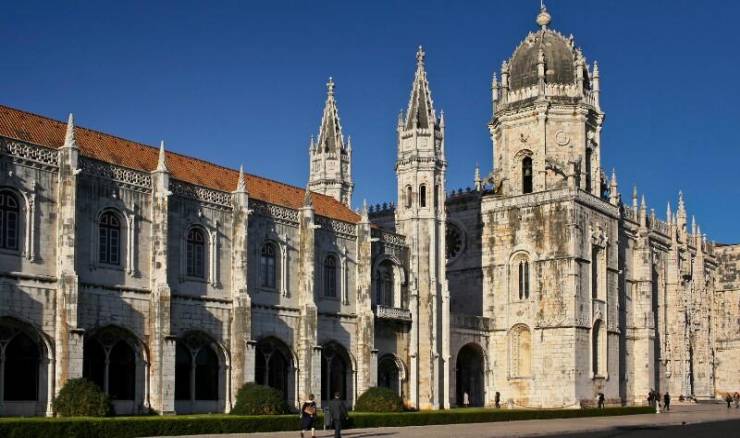 The Monastery of Jerónimos, or Jeroeminus, is one of Portugal’s greatest sights, a stunning monument of great historical and cultural significance and a UNESCO World Heritage Site. It is a masterpiece of the Manueline Late Gothic style and is located in Belém, a suburb of Lisbon. It was built at the beginning of the 16th century to commemorate the epic voyage of Vasco da Gama, whose tomb is located at the entrance of the Church of Santa Maria. 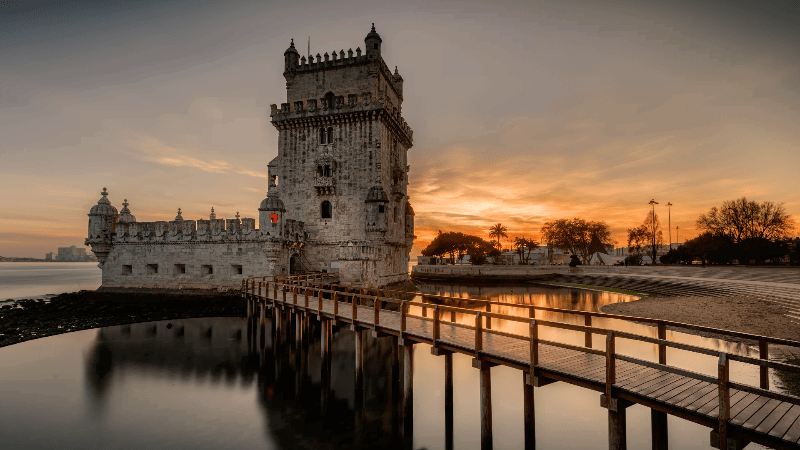 The tower in Belém

Belém is home to another symbolic landmark, the Torre de Belém. This historic tower is considered the pinnacle of Manueline style architecture and is a UNESCO World Heritage Site. It was built in 1521 as a fortress to protect the approaches to the Tagus River. The tower has a stunning ornate façade with whimsical nautical motifs. 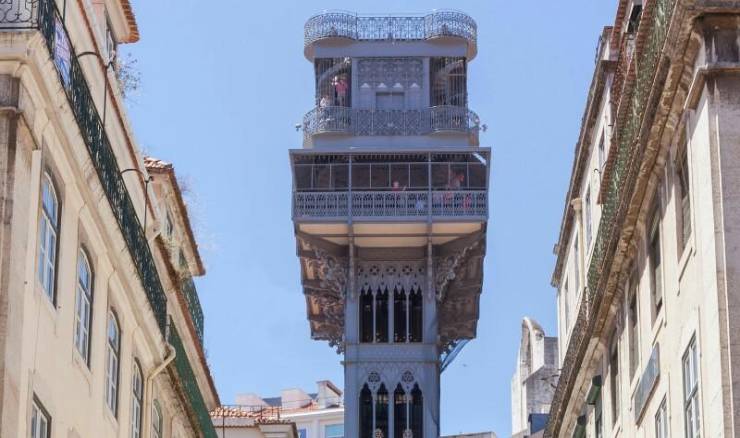 The Santa Justa is a neo-Gothic elevator in the Baixa district that opened in 1901. At first glance, its riveted wrought iron structure and gray paint conjure up images of the Eiffel Tower in Paris. And no wonder, since the architect of this construction was a pupil of Gustave Eiffel. 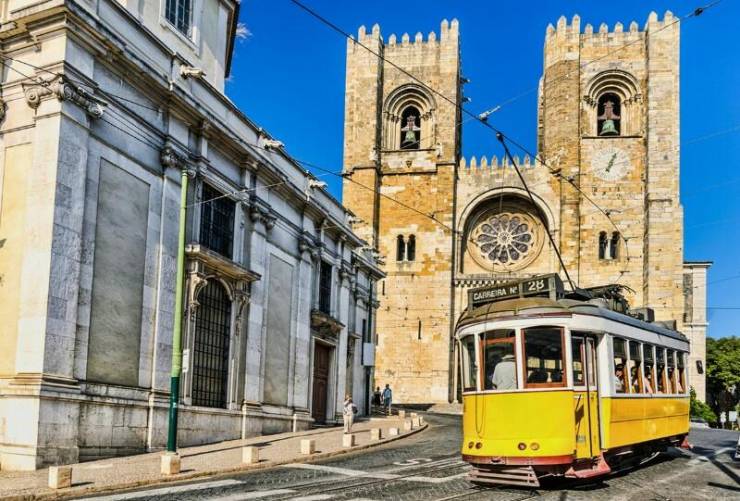 Sé is an imposing Romanesque cathedral in Lisbon resembling a small fortress. It was founded in 1150 and built on the ruins of a Moorish mosque. A devastating earthquake in the 12th century almost completely destroyed the original medieval structure. The church is now a mixture of architectural styles. The cathedral has a rather gloomy interior and a magnificent treasury of relics and artifacts. 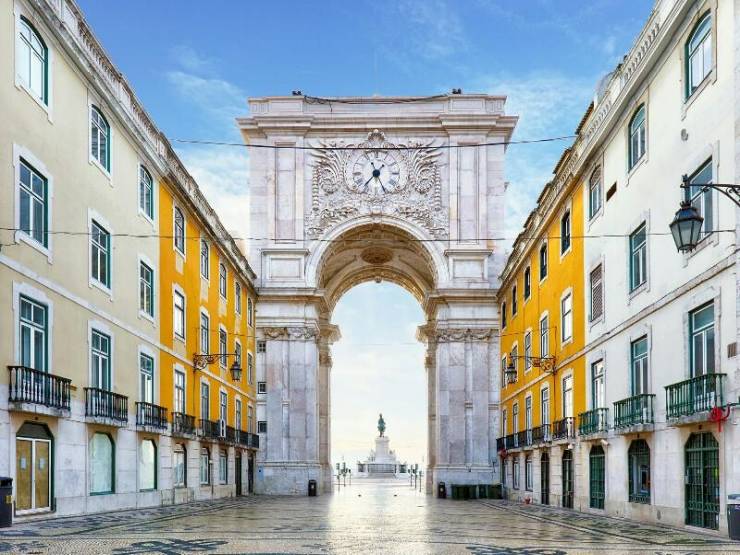 The Rua Augusta Arc de Triomphe is one of Lisbon’s familiar landmarks. The arch is built at the southern end of the main pedestrian boulevard and overlooks the huge Praça do Comércio. The structure was built in the 19th century to commemorate the reconstruction of the Portuguese capital after the 1755 earthquake. The clock dates from 1941. 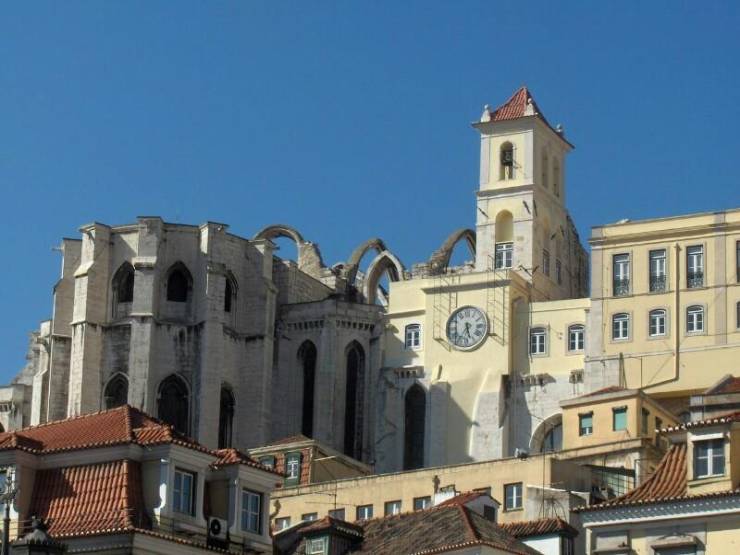 The Carmo Church is one of the most interesting historical monuments of the Portuguese capital and part of an ancient monastery. It is a treasure of the Carmelite order, built between 1389 and 1423. The magnificent Gothic monastery was destroyed by an earthquake in 1755. Strong underground tremors destroyed most of the building, burying hundreds of worshippers beneath them. The church now houses a museum that includes a column of Visigoths, a Roman tomb, and two ancient mummies. 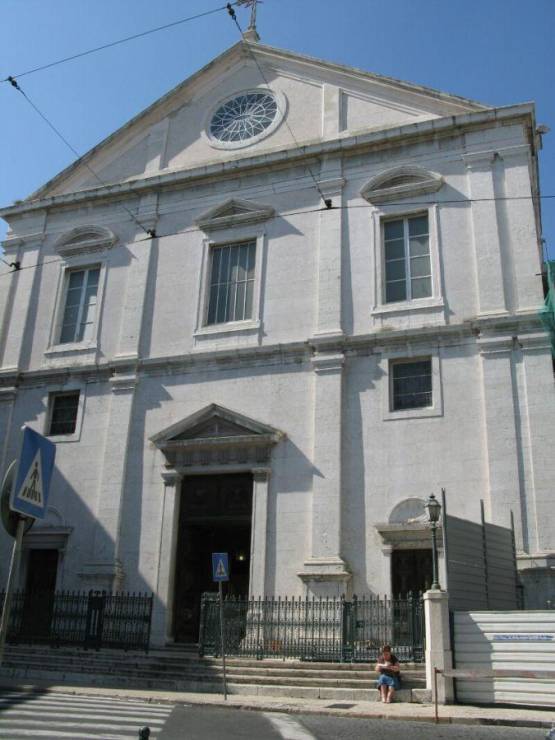 The Church of São Roque is a religious structure founded by the Jesuit order in the 16th century. The church has an unassuming Renaissance façade and a magnificent interior, making it one of the most impressive sacral sites in Lisbon. São Roque is simply stunning with its ornate decoration, marble trim and gilded elements. The church is now a museum that preserves treasures of religious art. 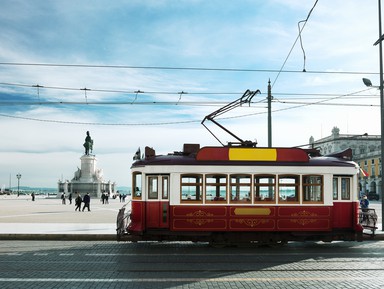 Stroll through historic districts and picturesque corners of the city 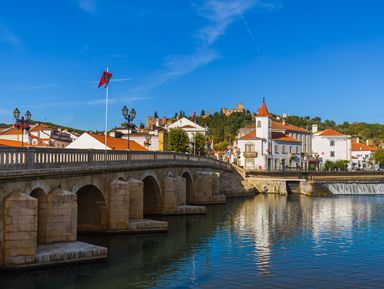 Driving tour – Portugal’s history and richness in its famous settlements