If you have time when visiting the Spanish capital, the famous Las Ventas arena is definitely worth seeing.

This is the largest bullring in the country.

There are also periodic concerts and flamenco shows.

After your tour, stop by the Madrid Bullfighting Museum, opened in 1951.

Planning a trip to the arena will help you with a brief overview of the attraction.

History of the arena

In the old days, bullfighting was arranged in city squares of rectangular shape.

But it turned out to be inconvenient: the bull would be driven into a corner and was in no hurry to entertain the public.

As a result, the authorities began to build round arenas.

One of them was the construction of Las Ventas Madrid, occupying the third largest area in the world.

It was built in 1929 as a replacement for the old arena, located at the Alcalá Gate.

However, the first performance took place two years later: in 1931.

The building reached a size of 65 meters in diameter and had a capacity of 25,000 people. 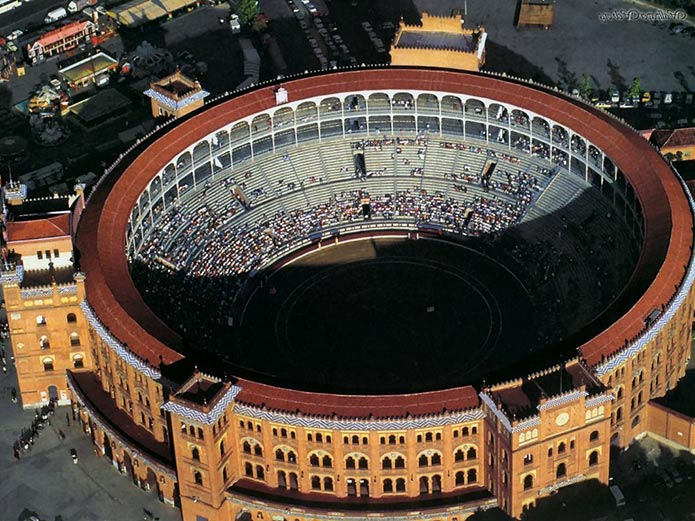 The building of the arena, located in the east of Madrid, is in the Neomudejar style. It was borrowed from the Moorish culture and was very popular in the early 20th century.

The address of the landmark is Calle de Alcala, 237. Before you go, check the map of the city to see where this place is located.

Plaza de Toros de Las Ventas occupies a huge area on which are:

At the entrance to the arena you will see a monument to the fallen bullfighters.

The monument has an inscription in Spanish, which translates as “Died a torero – an angel was born”. 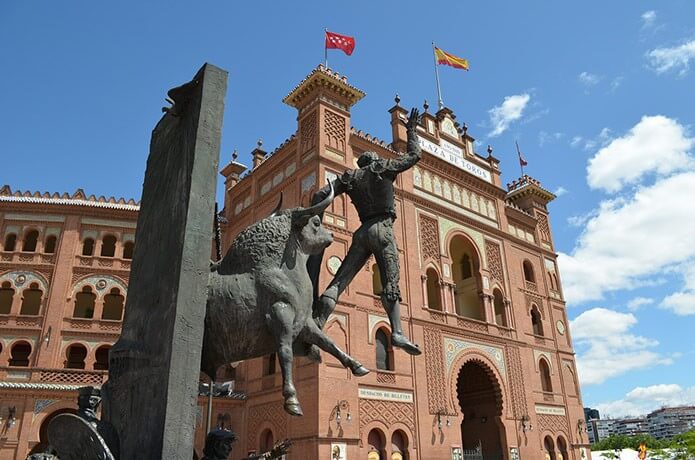 Another monument is dedicated to the inventor of penicillin, A. Fleming.

Grateful Spaniards erected it when it was found that antibiotics dramatically reduce the death rate of matadors from injuries.

Las Ventas Madrid venue has its own website: https://www.las-ventas.com/, where you will find the current schedule, videos of the most interesting fights and much more.

While prices for performances reach 200 euros, the cost of an excursion to the arena is affordable even for budget tourists:

The price includes the use of an audio guide in Russian and a visit to the bullfighting museum.

How to visit the arena and buy a ticket online

Buy tickets to visit the arena at the ticket office.

But, as sometimes there are long lines, the best place to buy is the official website of our partner in Russian ⇒ .

After paying for your order, get a voucher. Print it and show it when you arrive at the place. 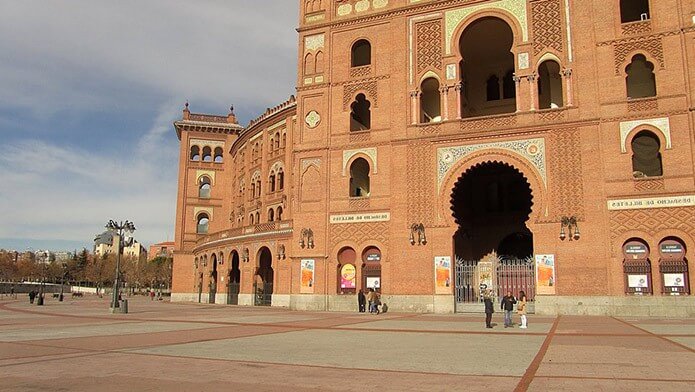 A brief description of the tour

After the fight the butchers start cutting up the bull carcass and distribute it among the social institutions. 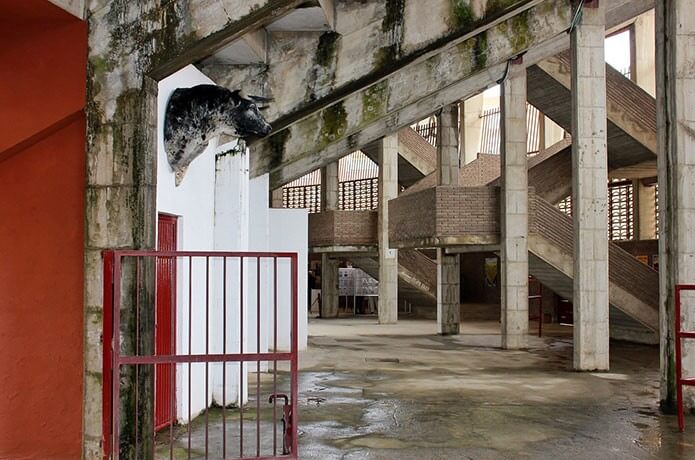 Visitors can take the tour any day except December 25 and January 1. The duration takes about an hour.

Next to the bullfighting arena is a museum dedicated to the favorite entertainment of the Spaniards.

READ
What to see in Gran Canaria, Spain - a guide to the most beautiful places on the island

Here you will hear the history of the appearance, learn the rules of the event, and see matador costumes and other exhibits related to bullfighting.

The museum is open Tuesday through Friday from half past ten to half past three, on holidays and Sunday from 10-00 to 13-00.

It is fairly small, so it does not take long to look around. 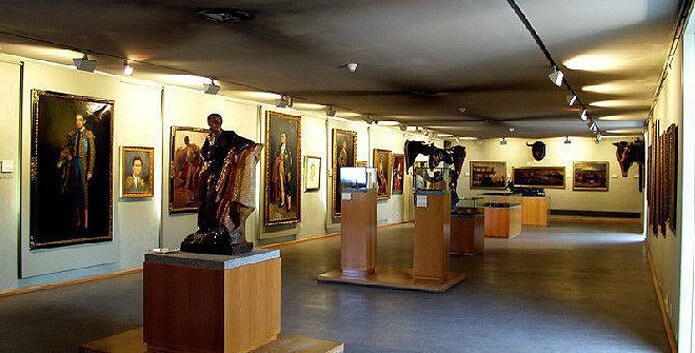 There are several ways to get from the center to the arena:

Despite the fact that people treat bullfighting in different ways, without visiting it the impression of Spain will be incomplete.

But for starters, you can limit your visit to the arena, which is an impressive architectural monument.

It is not difficult to imagine the passion that goes on during the performances.

And there is a reason to think about the words of the unknown author:

Las Ventas is the most impressive bullfighting venue in Spain.

Earlier such competitions used to take place in squares, which were rectangular in shape, but as it turned out later, it was a bad idea, because the bull was standing in some corner for a long time and did not want to entertain the visitors who came to see the bullfight. As a result, it was decided to begin work on the construction of rounded arenas. 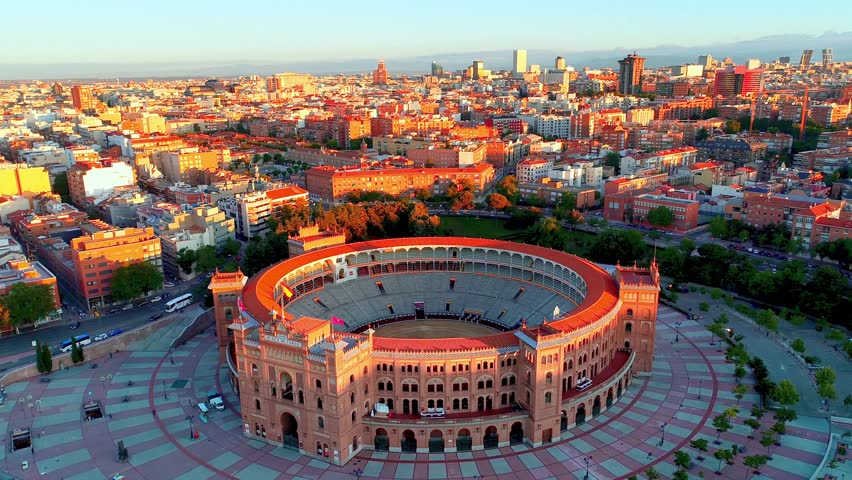 This was Las Ventas, which is currently the third largest bullring on the planet.

The history of this facility dates back to 1929. It was built to replace an outdated structure that was located near the Alcalá Gate.

However, the first bullfight did not take place within Las Ventas until a few years after the construction work was completed. The arena had a diameter of 65 meters and a capacity of 25 thousand people. The structure was built in a style called “neomudejar”. This style came from the Moorish culture and at the beginning of the twentieth century was very famous. 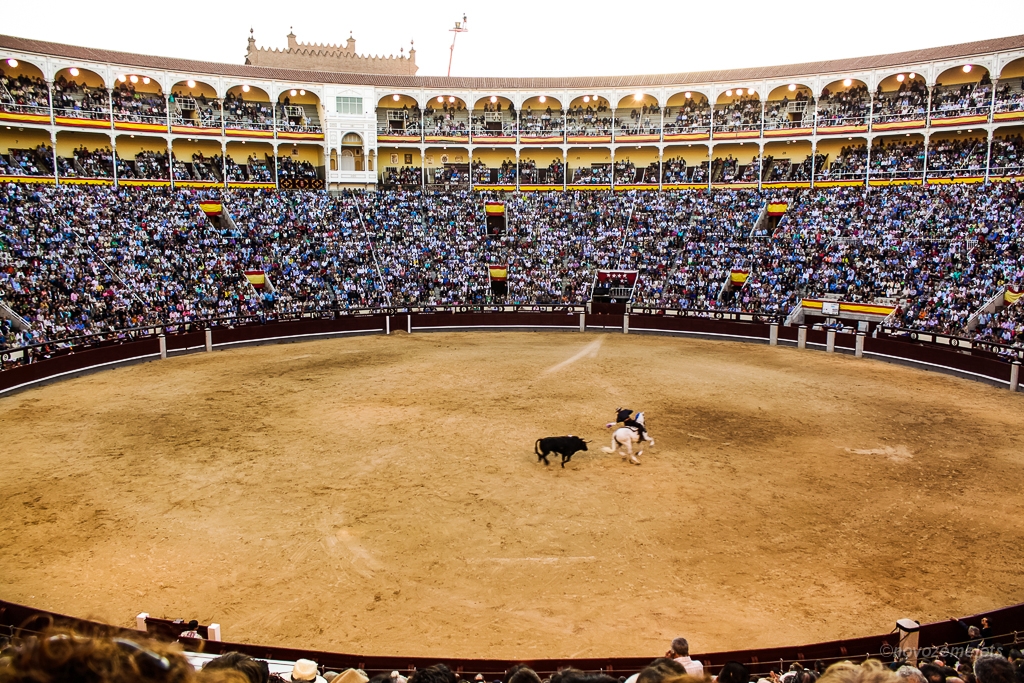 The cruel entertainment venue is recommended to visit during the summer season, as this is when the memorable bullfights are held every Sunday afternoon. From November to April they do not take place, but it is possible to visit the bullfighting museum and the bullring and the monuments placed near its main entrance, dedicated to the bullfighters. In the case of a lucky coincidence you can get to the festival or concert event, which are often held in the building. In mid-May, Madrid celebrates Saint Isidore’s Day every year. For three weeks you can see plenty of bullfighting. 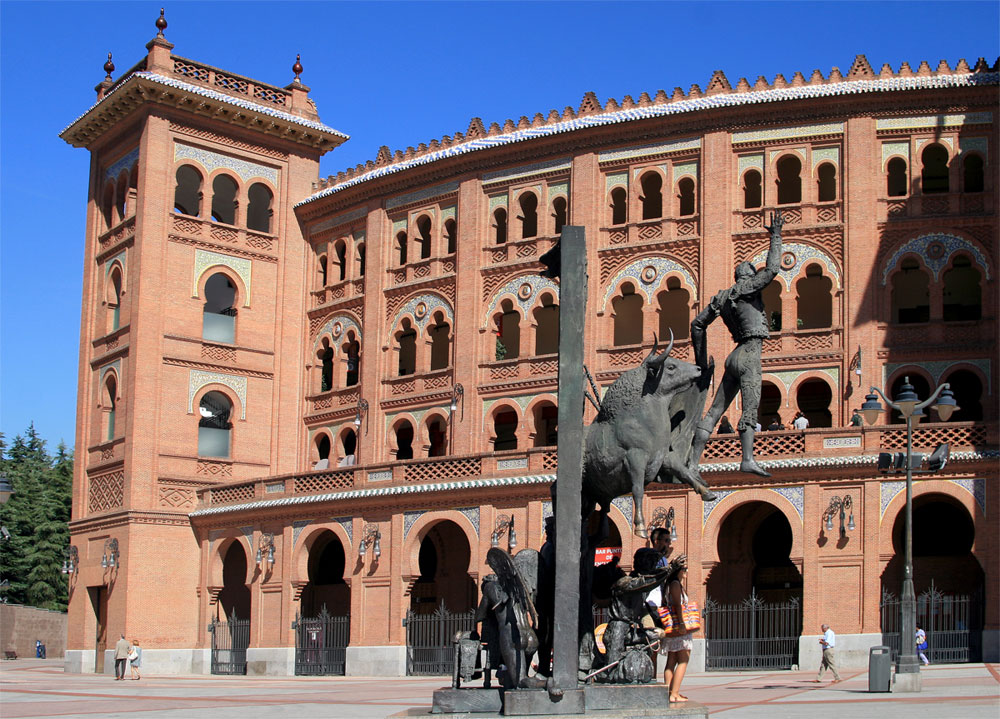 The cost of visiting the spectacular entertainment is a few hundred euros, while the price of a tour around the arena is much lower and is tied to age: entrance is free for children under 5 years old, for children aged 5 to 12 years inclusive the cost is about 6 euros, for those over 12 years old – about 10 euros. The price of the tour includes the use of a Russian-speaking audio guide and a visit to the bullfighting museum.

What is the tour? The tour begins at the main entrance of Las Ventas . Each bullfighter sincerely wishes that the crowd of indifferent spectators carried him out of the arena in their arms. 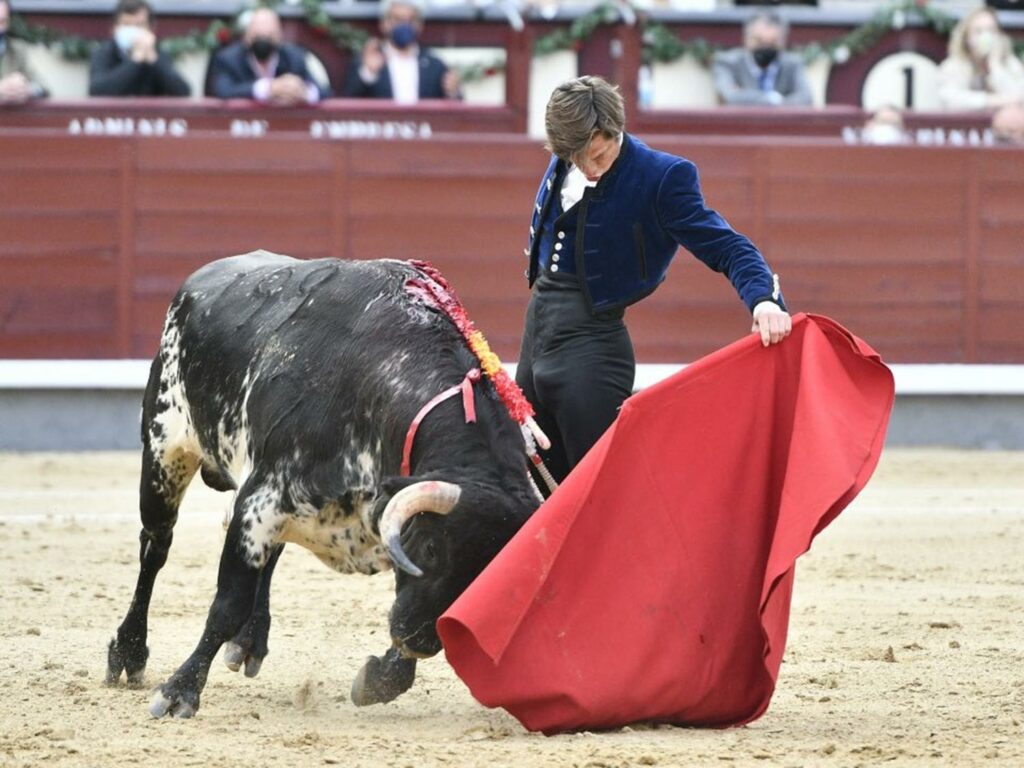 Next, the path laid out on the terrace opens before the tourists. Here one should pay attention to the individual elements of architecture . Because of them the structure for the corridors is considered one of the most incredible buildings on the globe. Then you see the Royal Box and the center of the structure, where the battles between the bull and the man take place. Great curiosity among the guests is also caused by the corral, designed for bulls. 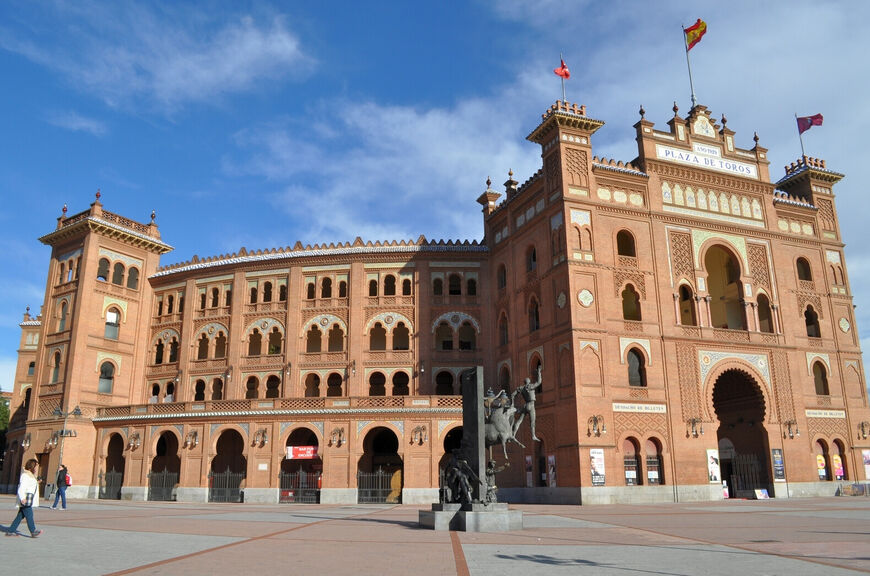 Every fan of Spanish bullfighting will appreciate the exterior and interior of the Las Ventas arena.