Kreuzenstein is a knight’s castle with a rich collection of weapons, a beautiful chapel, a hall of knights and a hunting room and can be reached from Vienna in half an hour.

Kreuzenstein Castle in Austria is of interest to all lovers of the Middle Ages. Visiting it, you can not only admire the majestic building, but also look at the interior with many original items of medieval life. Those who have seen the movie Witch Time will know it very well, since it was there that the movie was filmed.

Looking at the pictures of Kreuzenstein castle , you might think that this is the original fortification, preserved from the epoch of knights, but this is not quite true. It was really built in the XII century as a storehouse for utensils and weapons. The Gothic structure belonged to Lord Dietrich Grisanstein and originally bore his name – Grisanstein. The first mention of it is dated 1115.

The destruction of the original fortification is related to the events of the Thirteen Years’ War. In 1641 the Swedes captured it and established their headquarters there, and in 1645 Field Marshal Torstenson ordered it to be blown up on retreat. The destruction was severe – only part of the fortress wall, fragments of one of the towers and the chapel remained.

The ruins remained standing until the late 19th century, when in 1874 they were purchased by Count Wilczek, the chamberlain at Franz Joseph’s court, a polar explorer and a well-known art patron. He wanted to build a unique home for his family with a family vault and a repository for a huge collection of knightly objects – 100 thousand antiques.

The reconstruction took three decades. It was supervised by architect C.C. Gandolfo, and after his death by G.W. Moltheim. The architectural project is based on the surviving drawings of the original building, with additions, reconstructing the appearance of an ideal medieval fortification. The construction of the castle cost the owner 50,000 guilders annually.

The clock on the main tower dates back to the 15th century and the inscription on its face reads “Use it or lose it”, which is the motto of the rich and successful life of its owner. The phrase is a call to make the most of man’s time on earth.

To decorate his interiors, Count Wilczek acquired historical artifacts from all over Europe. For example, he bought an ivory cross figure and a 15th-century Gothic wooden altar in Barcelona for the chapel.

READ
Weird things in the Netherlands: what could surprise foreigners?

When you get to Kreuzenstein Castle in Vienna, you should definitely take a walk around the fortress wall to admire the view of the Danube.

On a tour of the interiors, visitors are treated to themed halls with a rich display of authentic exhibits:

The Armory exhibits the richest private collection of arms in Austria. There is enough armor to arm an entire garrison of about 100 men. One can see armors, swords, halberds and even small cannons of XIV century.

In the knight’s hall and the prince’s chamber, which served as the master’s bedroom, you should see the antique furniture.

The bed in the prince’s bedchamber, which is 500 years old, is unusually small – it turns out that in the Middle Ages it was customary to sleep sitting down, and the height of men was then much smaller.

Another unique piece of furniture attracts the attention of guests in the kitchen area. There is a table 7.5 meters long that used to serve as a bridge over the river in Salzburg.

A special aura adds to this place and a dungeon, which arose for purely practical reasons – it was used to get underground rocks for construction. A 200 meter long tunnel leads to the Danube.

In the underground it is impossible to pass by another exhibit – the skeleton of the bowhead whale, mounted on the ceiling. It was brought by Count Wilczek from his polar expedition.

The object is still in private ownership. Passage inside is possible only with a guided tour, which is held every hour.

The exhibition is open for viewing from April to October.

Unfortunately for guests inside the castle Kreuzensstein in Austria, photos are not allowed. However, if some exhibit is particularly desirable to capture, the guide as an exception will allow to make a picture.

How to get to the Kreuzenstein Castle

The tourist appeal of this place is particularly high, as it takes only half an hour to get from Vienna to Kreuzenstein Castle. There is ample free parking next to the building.

However, if you take public transportation, you have to walk from the bus or train stop for about 40 minutes. In good weather, a walk through the picturesque place will be very pleasant – you just need to take care of comfortable shoes, because the last part of the way you have to walk uphill.

To go by train, go to Floridsdorf subway station and there take the train S3 to Leobendorf – Burg Kreuzenstein. The trip time is 20 minutes. Trains run every half hour.

Bus #333 goes to the Leobendorf bus station, from which you also have to walk about 40 minutes.

If you do not have time for these walks, you can buy a tour and go with a guide directly from the hotel. However, the cost of such a service will be about 100 EUR. 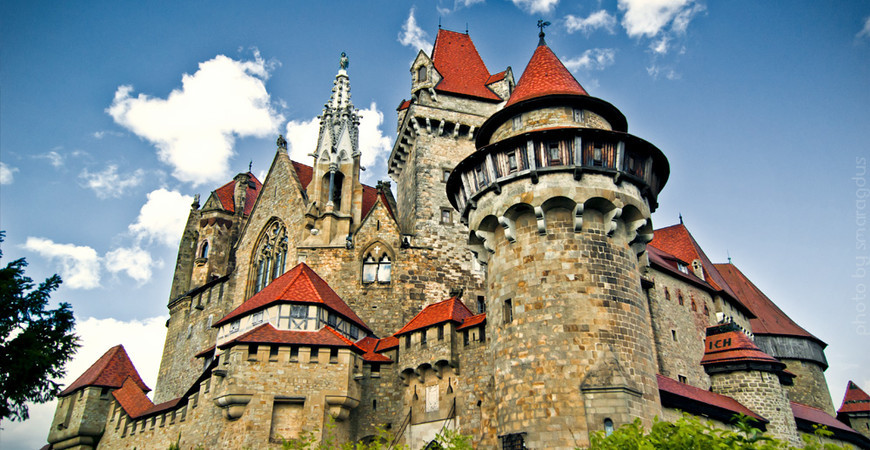 Kreuzenstein Castle is the main tourist attraction in the municipality of Leobendorf near Vienna. This majestic centuries-old building, towering above the Danube.

Today the castle is a public museum. Each day there are guided tours that explain the history of the castle and the name of its owner – Count Johann Nepomuk Wilczek.

The history of the castle begins in the XIII century, when the territory came into the possession of the Habsburgs. However, there were fortified settlements on the site of modern Kreuzenshtein much earlier.

In the middle of XVII century during the Thirty Years’ War the castle was seized by the Swedes, and on their retreat in 1645, they blew up the fortress. In subsequent years the ruins of the castle were dismantled for building materials by local residents. The castle had remained in its original form until 1847, when it was bought by Count Johann Nepomuk Wilczek, who soon set about restoring the medieval castle.

In fact, the castle was rebuilt from scratch, the work lasted about 30 years. The new building was eclectic: wherever possible, the historical appearance was implemented, while at the same time stylized features of well-preserved “classical” Austrian castles were introduced. The count-collector managed to furnish the castle with authentic historical furniture, to decorate the interior with medieval artifacts. Under the chapel was built the tomb of the Wilczek family.

You can visit the castle only as part of a group. Tours start every hour. The prices of tickets to the Castle Kreuzensstein depend on the size of the group and the age of the visitors:

The castle and its surroundings

The castle is particularly impressive from a distance – it towers 260 meters above the Danube River. A wide moat and a real drawbridge leading up to the main entrance of the castle add to the authenticity of the castle. If you ignore the main gate, you can go down into the tunnel through the moat. After the entrance to the tunnel there is a cave, which is decorated with an impressive and at the same time creepy hunting trophy – the skeleton of a whale caught during a polar expedition in the second half of the 19th century. In ancient times the tunnel was used for escape in case of a long siege of the fortress.

The inner courtyard of the castle includes several buildings: a chapel, a tower with a clock, stables, servants’ houses and a well 60 meters deep. The beautiful century-old linden trees in the courtyard were planted by Count Wilczek himself.

Of the internal structures of the castle the most impressive are:

In the surrounding area of the castle there is a small zoo and several restaurants with Austrian cuisine.

How to get to Kreuzenstein castle from Vienna

The distance to the castle from Vienna is about 26 km. The most convenient way to get by yourself by public transport is to take the train to Leobendorf (if you choose the ticket – Leobendorf – Burg Kreuzenstein Bahnhof). The commuter train takes about 26 minutes to reach the station. Timetables, prices, possibility to buy tickets online – on the website of the Austrian Railways. In addition, there are buses to Leobendorf station.

From the train station to the castle you will walk about 3 km according to the signs.